While the northern hemisphere prepares for the shorter days and colder nights of fall, people south of the equator are venturing outdoors to soak up the sun. From South America to Oceania, spring is here in the Southern Hemisphere — and now is the perfect time to visit.

Travel south now and you’ll beat the heat — and crowds — of these destinations’ summer months. You’ll also find that most places offer killer travel deals this time of year. Instead of raking leaves and adding layers, come check out the best cities to visit in the Southern Hemisphere this fall. 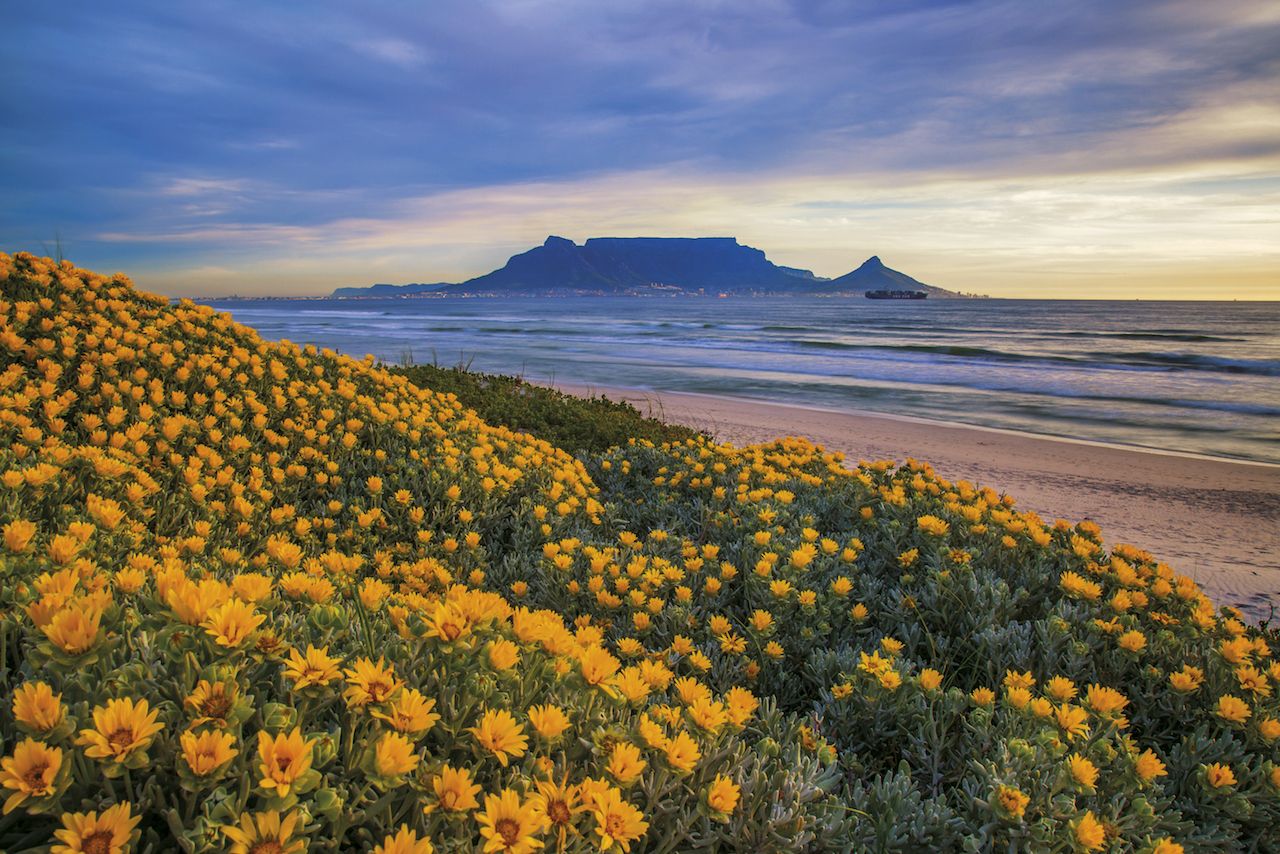 Near the city limits, grab some friends and hike Lion’s Head or visit the famous Kirstenbosch National Botanical Gardens at the base of Table Mountain before scrambling to the top for stunning views of Cape Town and the surrounding area below.

Follow the trail of wildflowers from Cape Town up the Cape Flower Route along South Africa’s west coast to see the array of colors that winter rains bring between Richtersveld and Yzerfontein. Further north, witness the once-arid landscape of Namaqualand aflame with orange and yellow daisies. Make sure to try some wine at one of the vineyards along the way, and look out for hundreds of southern right whales and their newborn calves splashing along South Africa’s coastline.

For pictures of quintessential South African flora, you’ll have to go a bit out of Cape Town to Pretoria, dubbed the Jacaranda City. Daily flights will get you up there for Instagram-worthy photo-ops of the city painted a stunning purple by the blossoms. 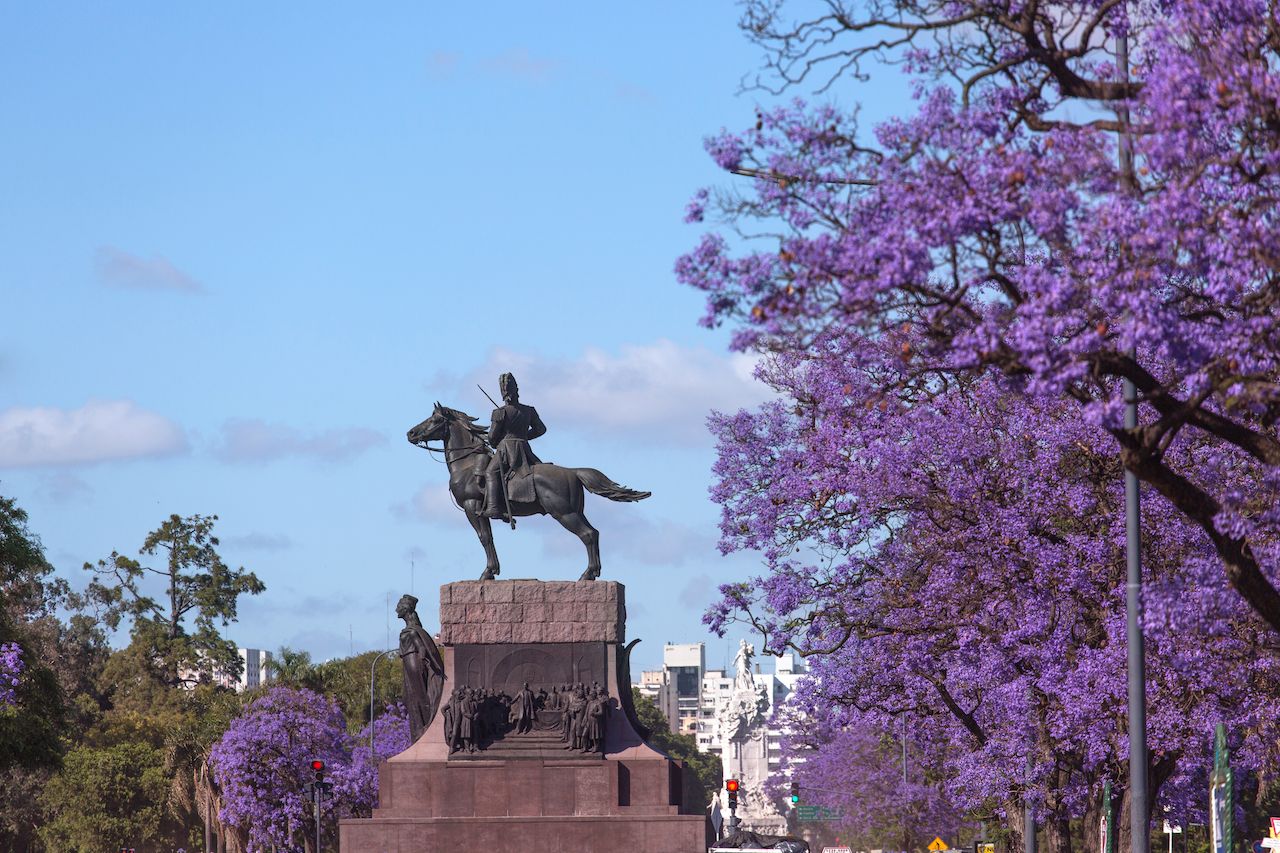 Not to be outdone, Buenos Aires boasts its own jacaranda blossoms. Check them out along Avenida Figueroa Alcorta on your way to stretch your legs with locals in the Bosques de Palermo.

Grateful for the warmer temperatures, Porteños move their mate-drinking outdoors to the balconies and patios. Tables and chairs migrate from inside the bars and cafes toward the middle of the streets as friends and family gather to enjoy the drier spring weather. The start of spring in late September coincides with Student’s Day. See if you can join the students for an asado (Argentine barbecue) followed by dulce de leche for dessert.

Buenos Aires provides easy access by plane down to the epic mountains and lakes of Patagonia daily. You’ll find a quieter, less expensive Patagonia coming to life in spring, which is the best time to avoid the crowds and strong winds of summer. If you go, make sure to visit Punta Tombo on the coast to catch the largest colony of Magellanic penguins in South America as they waddle ashore in late September. 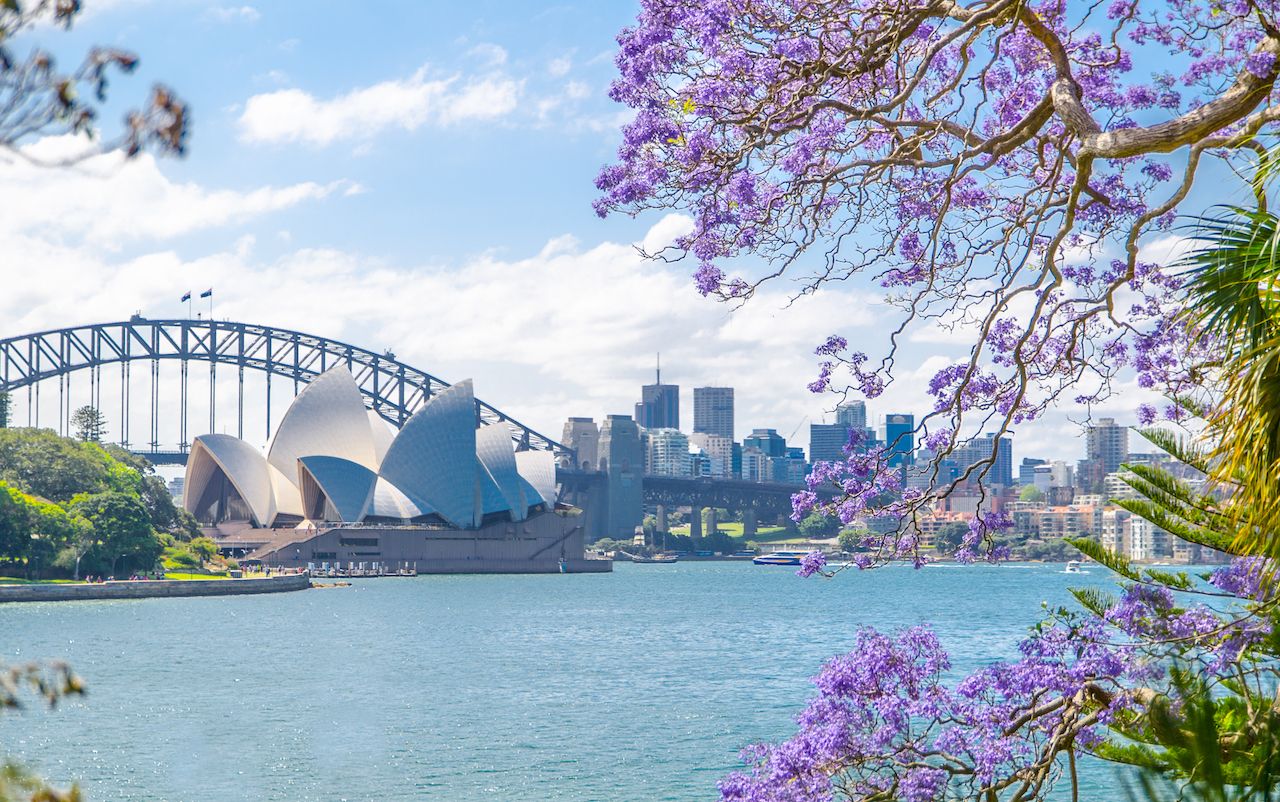 The best part about spring in Sydney is that it’s the region’s driest season. Instead of rain, a natural tunnel of jacaranda trees showers visitors with vibrant purple blossoms at McDougall Street in the Kirribilli neighborhood. For more flora, take the Spring Walk at Sydney’s Botanical Garden and see the beautiful roses, cherry blossoms, and tulips bursting with color.

The mild climate and manageable tourist crowds during the shoulder seasons are perfect for visiting iconic sites like the Sydney Harbour Bridge, the sail-shaped Sydney Opera House, and the sprawling Darling Harbor. It’s also the perfect time of year to find your own patch of sand and sea among the beaches tucked away along the Spit Bridge to Manly Walk. Keep an eye open for migrating whales frolicking just offshore.

Bringing in spring are three of Sydney’s best festivals: Thousands of visitors take over Ward Park, Shannon Reserve, Crown Street, and Hill Street during the Surry Hill festival, a celebration of art, architecture, and delicious food set within a trendy neighborhood packed with pubs, galleries, and cafes. For a more refined experience, dress up and don your wildest hat as you cheer on your horse at the Sydney Spring Carnival, which runs from early September to mid-October at the luxurious Royal Randwick and Rosehill Gardens. Finally, it’s off with the fancy clothing (and your shoes) and back to bohemian roots at the Lost Picnic on October 13th. Celebrate springtime the way Aussies know best — with endless opportunities to stuff your face, listen to live music, and dance long into the warm spring night with family and friends. 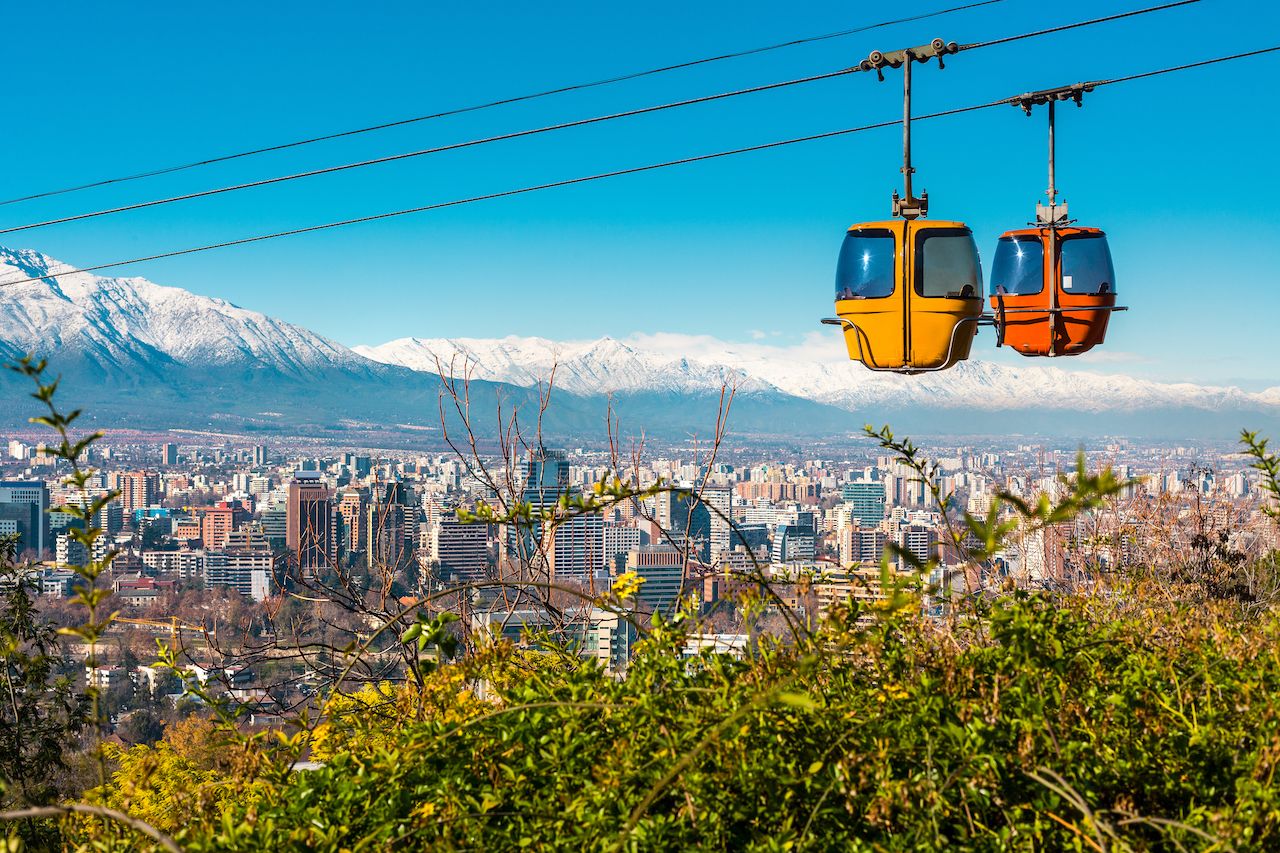 Much like in Buenos Aires to the east, the people of Santiago embrace a dry spring after staring out at skeletons of trees in the rainy winter months. Spring is the best time to sit outside and enjoy the lush greenery and wisteria blooming while you taste famous Chilean wines in the central valley — or sip on Pisco Sours, made from the national liquor, which is produced just north of Santiago in the Valle de Elqui.

Snowcapped Andes and the Chilean Coast Range surround Santiago, making a beautiful backdrop for photos of the city. It’s especially lovely in spring, when snow still covers the mountaintops, but the inversion phenomenon that can cause winter smog loses its grip — making for much clearer skies. Hiking trails just north of the city abound (although the trails aren’t always well marked), and fewer than two hours away by car, you can reach the coastal town of Viña del Mar.

While you’ll find many opportunities for hiking further south, the city of Santiago provides easier access to the Atacama Desert up north — the driest in the world. Multiple flights a day get you up to Calama where buses run to San Pedro de Atacama. Weather in the desert stays dry and mild year-round, but nights still get chilly in spring. Throw on your jacket and sprawl out on the plateau to see a sky untainted by the presence of clouds or light pollution — a photographer’s dream. 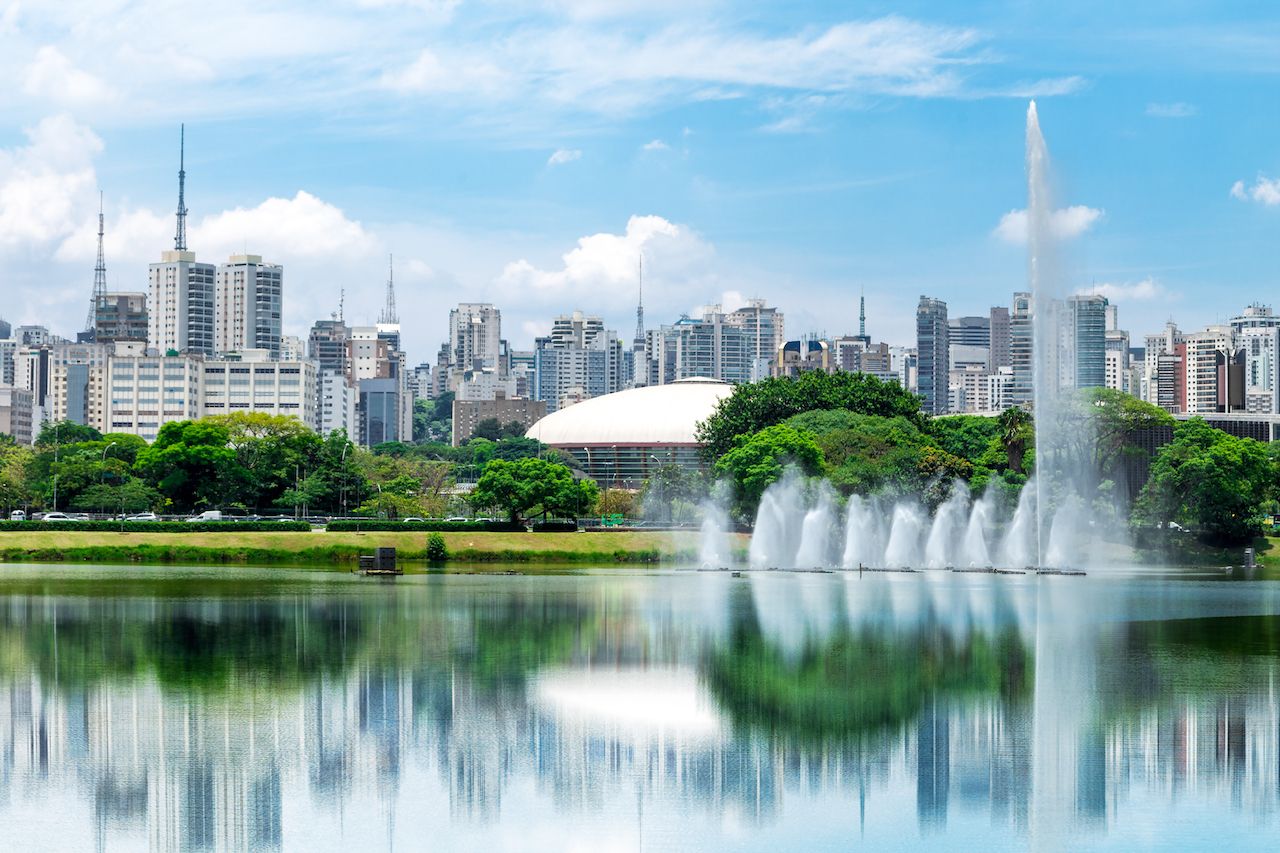 Paulistanos shed their light jackets and raincoats as they say goodbye to winter and welcome spring. From art-house theaters and underground bars to upscale restaurants and film festivals, this innovative hub of South American culture has something for everyone. The streets of Sampa, as locals know it, swell with crowds as events run full swing during the drier, warmer months of late September through November. This includes the thrilling Formula 1 Grand Prix at Interlagos racetrack — considered by many to be the most challenging track in the F1 circuit.

Grab delicious mortadella sandwiches and pasteis at Bar do Mané, then head to the renowned São Paulo International Film Festival (known as Mostra) for previews, foreign-language films, and outdoor screenings in over 20 different venues during the months of October and November.

Of particular interest this year is the 33rd edition of the Bienal de São Paulo, the second-oldest art biennial in the world after the Venice Biennale. In an unprecedented move, curator Gabriel Pérez-Barreiro has allowed the group of artist-curators to establish the look and feel of the show set up inside the Oscar Niemeyer-designed Ciccillo Matarazzo Pavilion. You’ll find the building in Ibirapuera Park, South America’s most visited park and a wonderful place for a spring stroll. 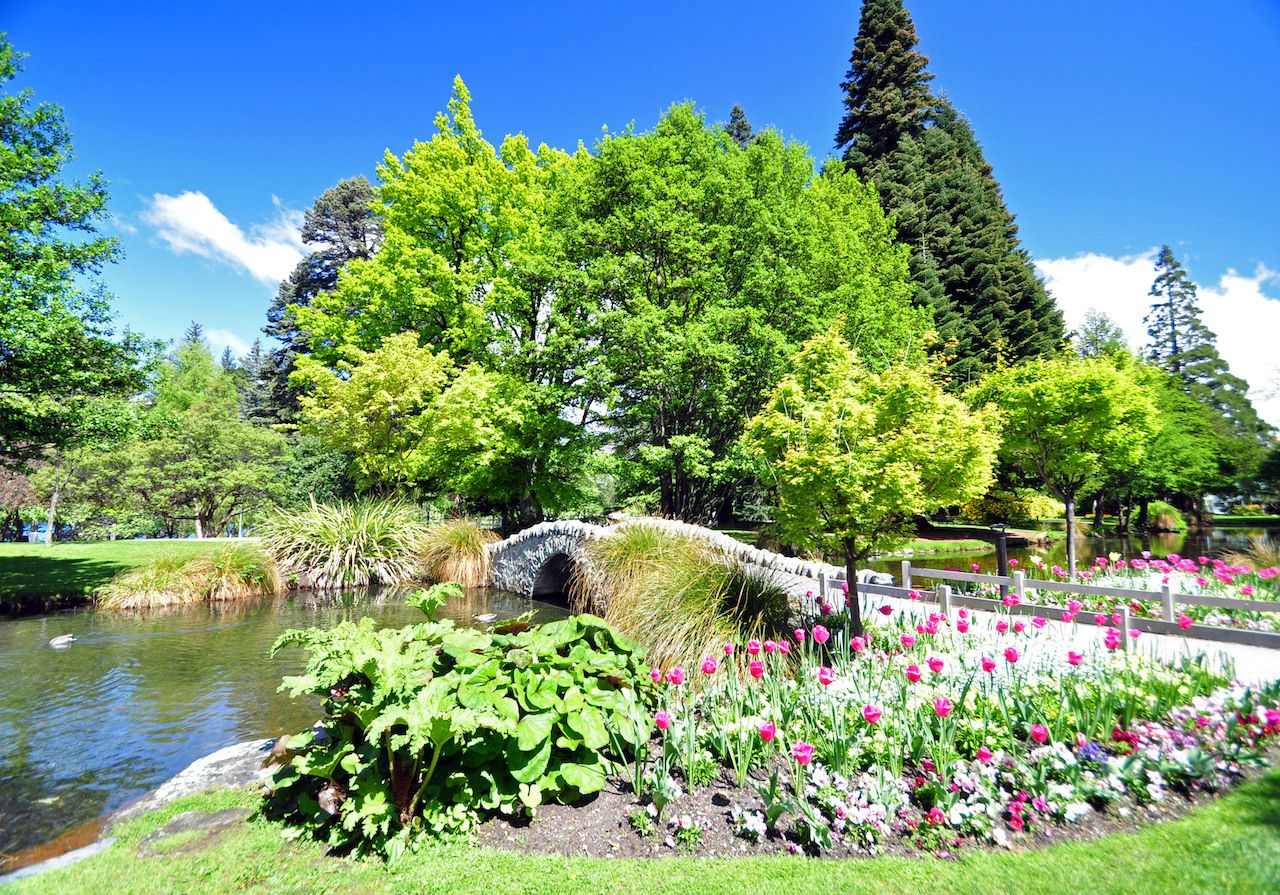 If you’ve seen the rolling green hills and snow-capped peaks of New Zealand in The Lord of the Rings, you know the Kiwis have natural beauty to boast of no matter the time of year. But the spring months from September to November are the perfect time to visit the South Island, as the shoulder season gives you the best of both extremes.

For the adrenaline junkies, you can still get your winter-sports fix. Get up into one of Queenstown’s ski fields to shred the gnar in a t-shirt or conquer the third-highest bungee in the world at the Nevis Highwire Platform in the nearby Southern Alps. You can also ride the gondola at Skyline Queenstown and rage your way back down the legendary Queenstown Bike trail at breakneck speeds. Follow the Queenstown Trail out to the wineries in Gibbston, then reward yourself with a fresh rosé in the sun before catching a shuttle back to the city.

PaddlingThe 7 Most Beautiful Places To Go Kayaking in New Zealand
Tagged
Trip Planning
What did you think of this story?
Meh
Good
Awesome