it’s 4:30 pm, and the sun has just dipped behind a mountain peak. You’re outside on a crowded wooden deck, savoring a refreshing draft beer. To one side, a group of older skiers in their expensive Bogner ski jackets celebrate the last rays of sunlight by ordering two more bottles of Riesling. On the other side, a cadre of hardcore skiers who likely spent the whole day out of bounds clink their shot glasses together and down another round of Jäger.

The DJ puts on a German “schlagermusik” song (think modern polka-type music with a dance beat dropped behind it), and suddenly, everyone from the wine drinkers to the Jäger drinkers is singing along, enhancing the beat by pounding their ski boots against the deck. The fact that everyone speaks languages ranging from Dutch to Italian to Portuguese and has no idea what the words are doesn’t really matter (and schlager lyrics are generally nonsensical, anyway). 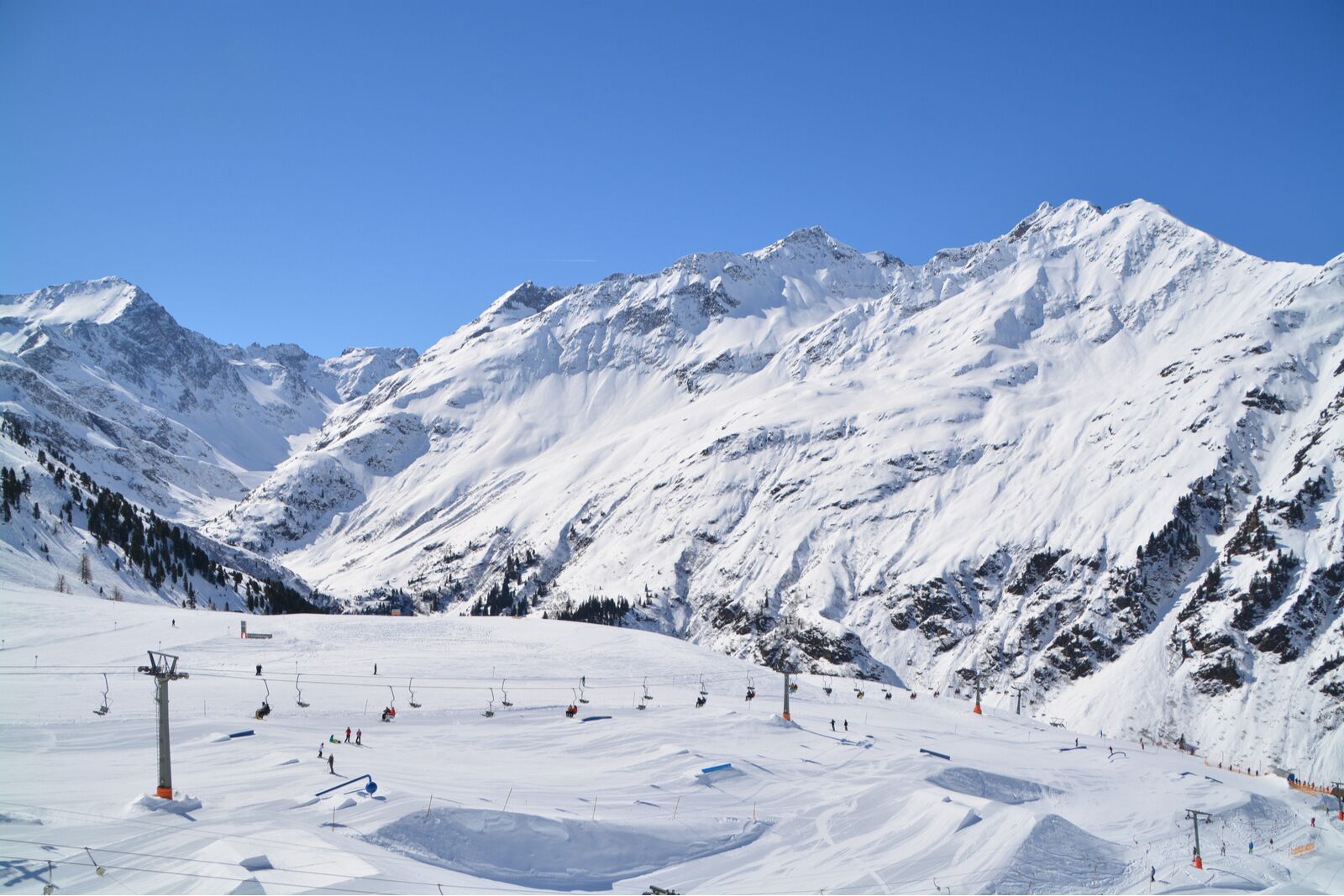 Welcome to St. Anton am Arlberg, the biggest resort in Austria’s largest ski area and a destination often called the “world capital of après-ski.”

“It was fun to see people of all ages there. There were clearly really good skiers there and really not good skiers,” says Caitlin, a San Francisco resident who traveled to St. Anton this past January. Caitlin, who grew up skiing in Colorado, preferred not to use her last name. “In general, everyone clearly thought that this was like an important part of the skiing experience, which I thought was really cool.”

In St. Anton, Austria, après is not just “important.” It’s also nearly unavoidable as you’ll have to ski down past the resort’s top après bars on your way back to the base at the end of the day. If you manage to resist Taps, Krazy Kanguruh, and the MooserWirt as you whizz by, then it’ll be the final of the four most famous après-ski spots in St. Anton, Austria, waiting for you at the bottom: the aptly named Basecamp. 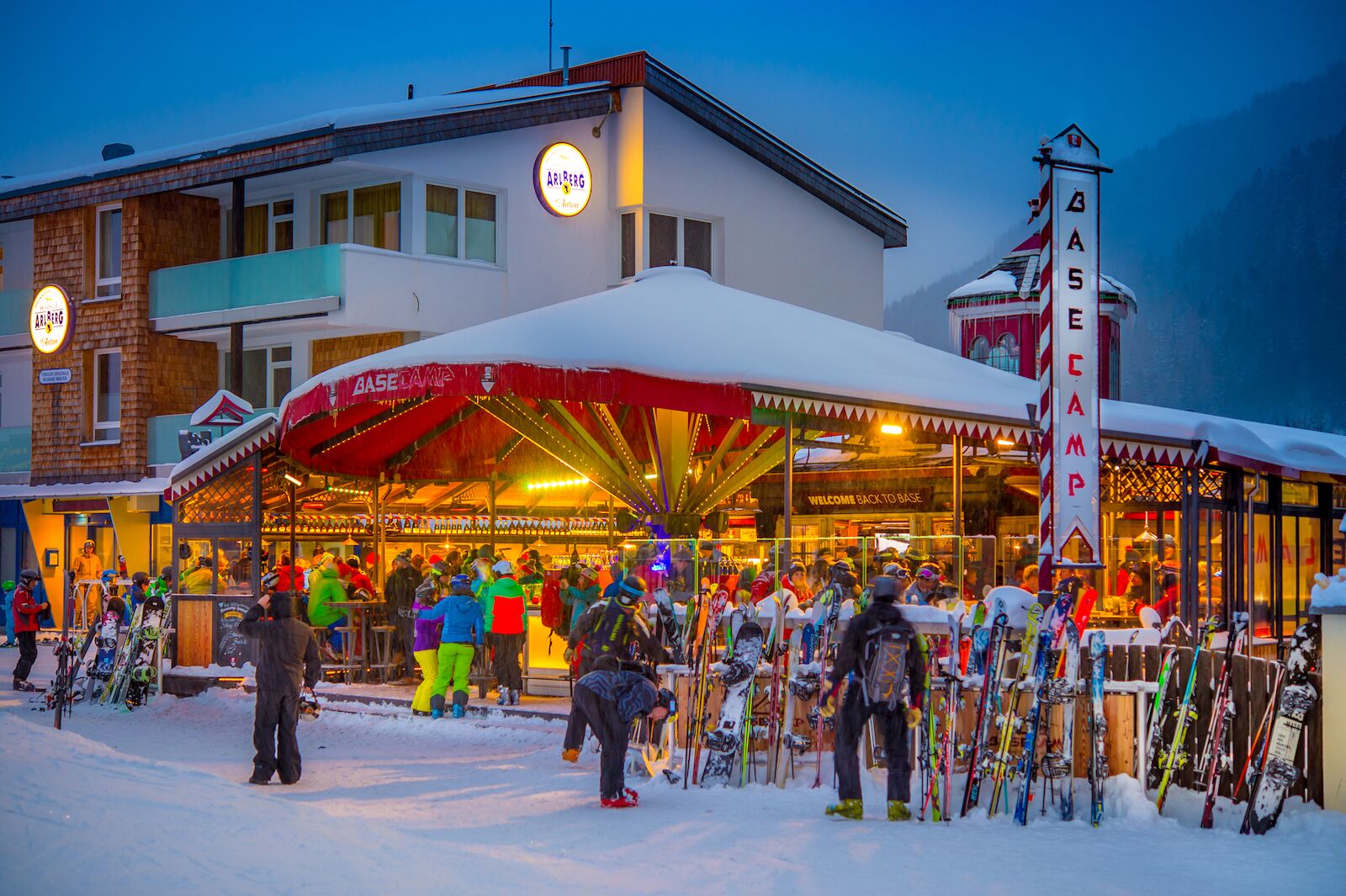 The first famous spot skiers will pass in St. Anton’s après-ski scene is the Krazy Kanguruh. It opened in 1965 and the fact that it’s still standing attests to the area’s long history of ensuring the fun doesn’t stop after the last run of the day. Since 2009, the Krazy Kanguruh has belonged to Olympic gold medalist and alpine racer Mario Matt.

But if the Kanguruh’s catchy Euro tunes aren’t your thing, you could round the corner in the same building and order a pint at Taps, where the music is more EDM-inspired. Expect the Taps crowd to be a lively group with lots of electronica-loving Swedes, says Nicolas, a college senior who spent four months of his pre-university gap year skiing in St Anton and working at Basecamp. 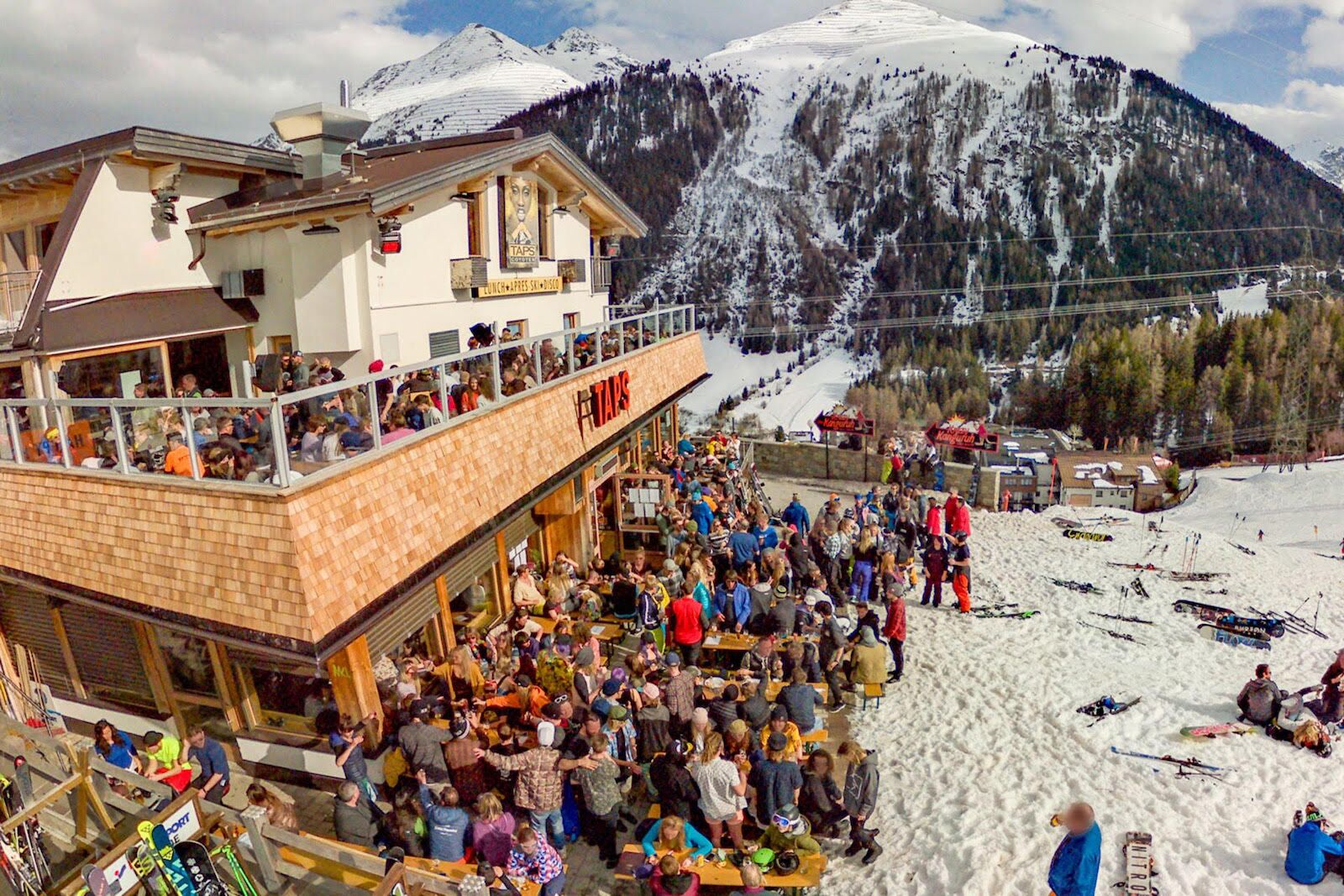 Nicolas, who also asked to be referred to only by his first name, is one of the dozens of young Europeans who spend the winter living and working in St. Anton, Austria. These “seasonaires” hail from several countries, but most are the aforementioned EDM-loving Swedes and schlager-chanting Brits.

Beyond the seasonaires, St. Anton draws skiers from all over the world who come for some of the best on- and off-piste skiing in the Alps – and for the après. Caitlin says she and her friends shared a table with three South American guys who had skied in Aspen a couple of years earlier but had been disappointed by the party scene. After doing some research, they settled on St. Anton instead.

“They said that they came to St. Anton [from Peru] specifically because they wanted an après scene,” says Caitlin. And the hottest night of the week, après goers will quickly realize, isn’t Saturday: it’s Thursday. Saturdays are actually the quietest since most ski homes are rented on a Saturday-to-Saturday basis. 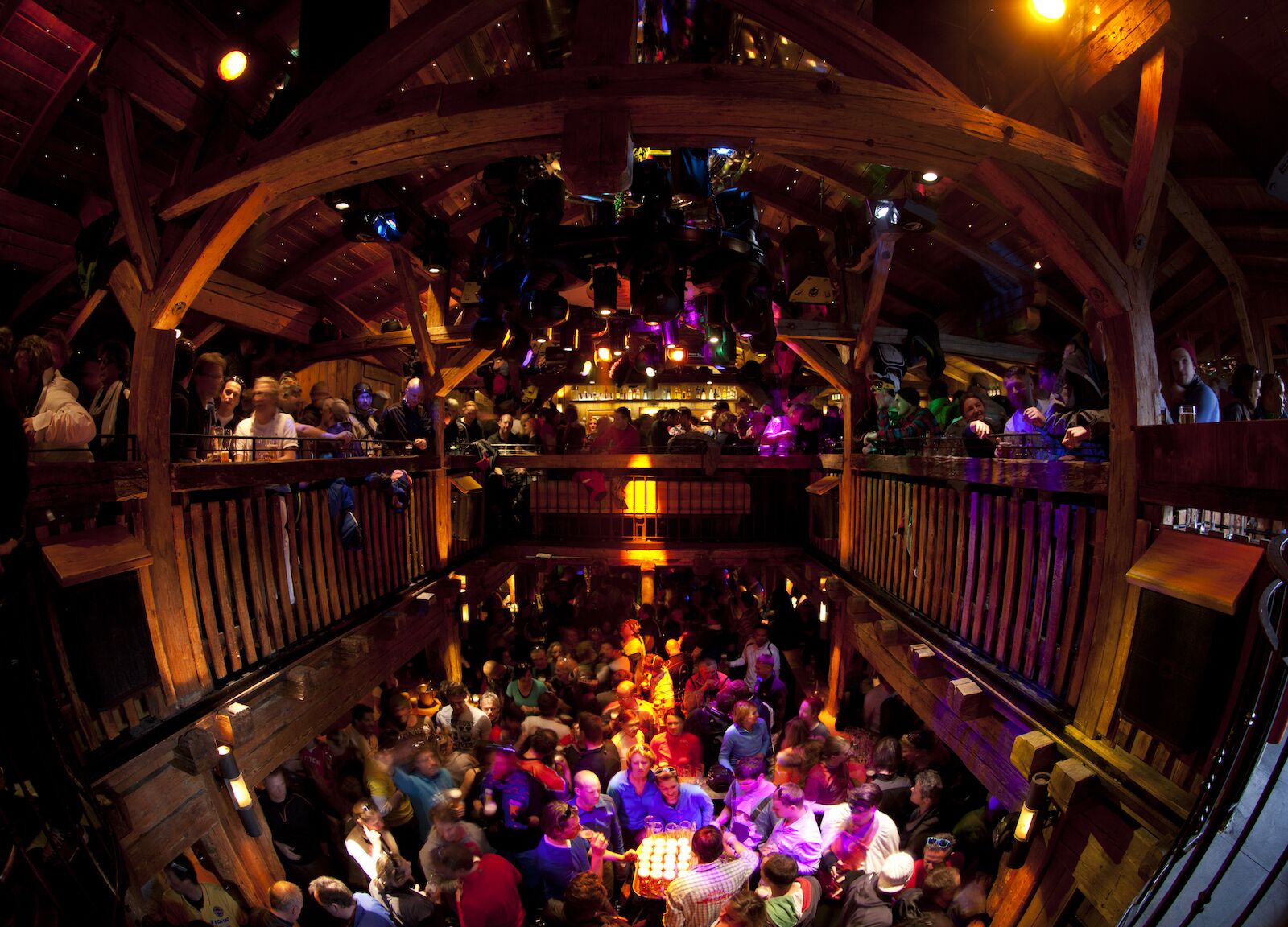 But regardless of what night it is, locals, seasonaires, and weekend warriors from nearby Vienna and Munich are practically destined to sing schlager, thanks in part to its simple beats and easy-to-shout rhyming lyrics. And there’s no place more known for it than the most popular of the on-mountain après spots: the MooserWirt.

“You would start at Taps or Krazy Kanguruh and you might make your way down to MooserWirt towards like 7:00 PM, before it closes at 8 PM,” says Nicolas. At MooserWirt, the DJ stationed on the second-floor balcony spins jams nightly while overlooking the crowd. Inevitably, every Euro hit the DJs throws on manages to bring the energy level higher and higher, even though it’s only 7 PM. And what gets people going the most is, naturally, schlager. Schlagermusik is such an essential element of the mountain party scene that you can actually buy compilations assembled just for après-ski listening. Though I visited during a time in which COVID-19 regulations required everyone to be seated, the energy level wasn’t muffled. People toasted across tables, sang their favorite tunes even if seated, and, when their big tables had space, made new friends anyway.

“I wonder how party people, who do not speak German, could remember all these senseless lyrics,” muses Klaus Höfler, an Austrian journalist and extreme athlete, in a Whatsapp conversation with me as I mention where I am. 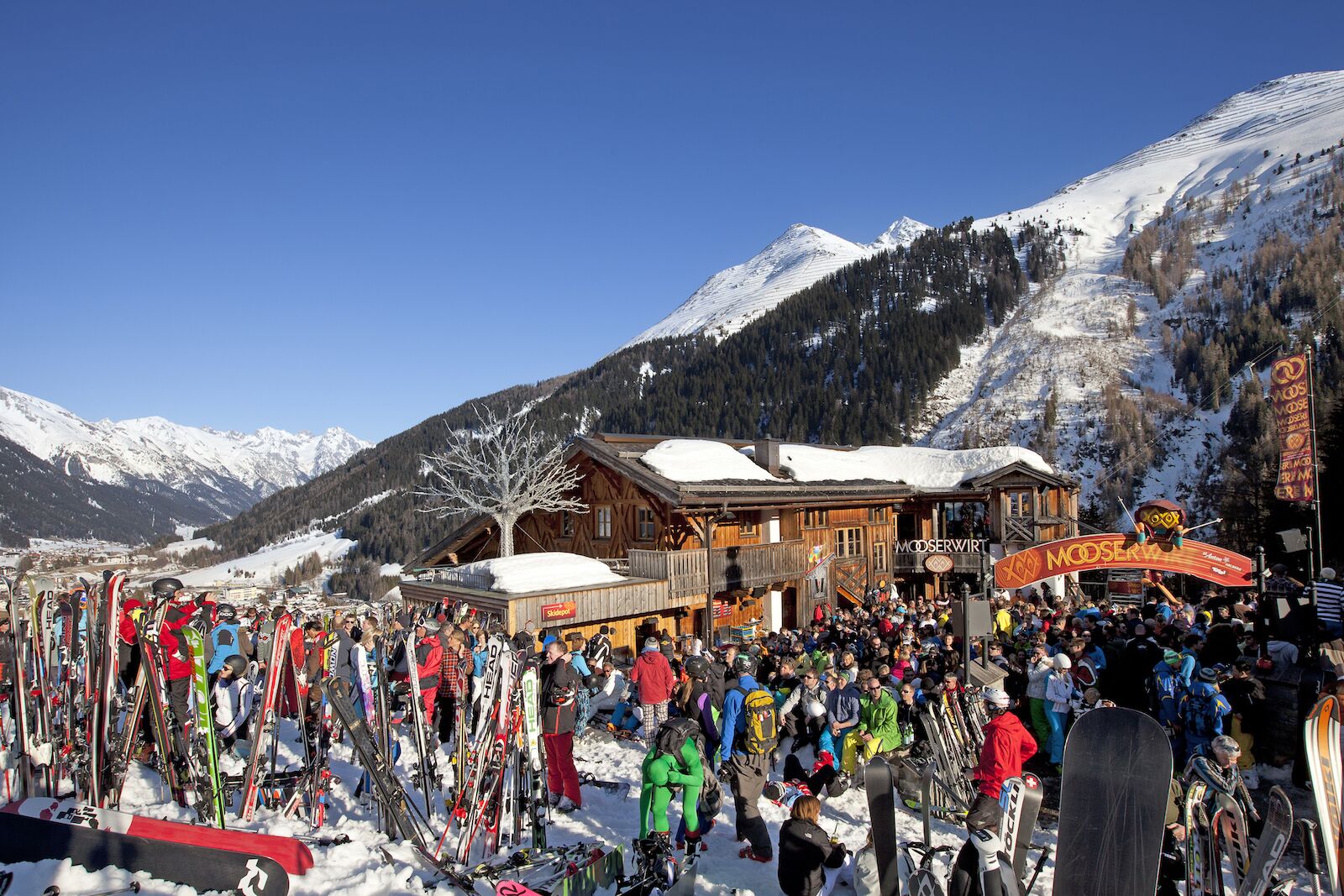 He mentions lyrics like “knallrotes gummiboot” (“bright, red rubber boat”) and the ever-popular “Wie heisst die Mutter von Niki Lauda? Mama Lauda,” which translates to “What’s the name of Niki Lauda’s mother? Mamma Lauda!” Interestingly, “Mama Lauda,” sounds a lot like the words for “make it louder” in German, and it’s a line that the song – and après-ski revelers – repeat over and over.

When the MooserWirt doors close at 8 PM, finding your skis or board among the hundreds of pairs leaning against the outdoor wall is a chaotic affair. Hopefully, you’ll snap into the skis you started your day with, though it may be challenging depending on how many pints you’ve had. But finding your skis is not a guarantee, and I’ve known at least one skier who ended up with another pair of skis permanently.

“It is kind of weird, the concept of skiing down right after having a lot of alcohol. It seems like it doesn’t encourage the best behavior,” notes Caitlin, who says that in St. Anton she broke her normal rule of never mixing drinking and skiing. On the other hand, she adds, “It means that the only people there are the people who’ve been skiing all day.”

In St. Anton, Austria, the après-ski bars aren’t just a few steps from the parking lot. While you can take a bus or walk around 20 minutes from the village, the most direct and popular method for getting there is to ski in (and ski out). That means the vast majority of your bar and dance floor neighbors are still in their ski clothes, adding to the laid back feel.

But that doesn’t mean they’re all just wearing black Helly Hanson thermals. The shops of St. Anton are packed with brightly-patterned base layers to serve as the perfect après-ski outfits, along with wacky one-piece suits that seem more designed for drinking and socializing than making turns. And it’s not unusual to see skiers showing off their fashion, as I did when one skier at the Mooserwirt removed his jacket to reveal a shiny yellow, 1970s-style polyester shirt – unbuttoned halfway down, naturally. Outside, a half-dozen guys around a table were wearing one-piece ski outfits in shades ranging from peach to deep purple. 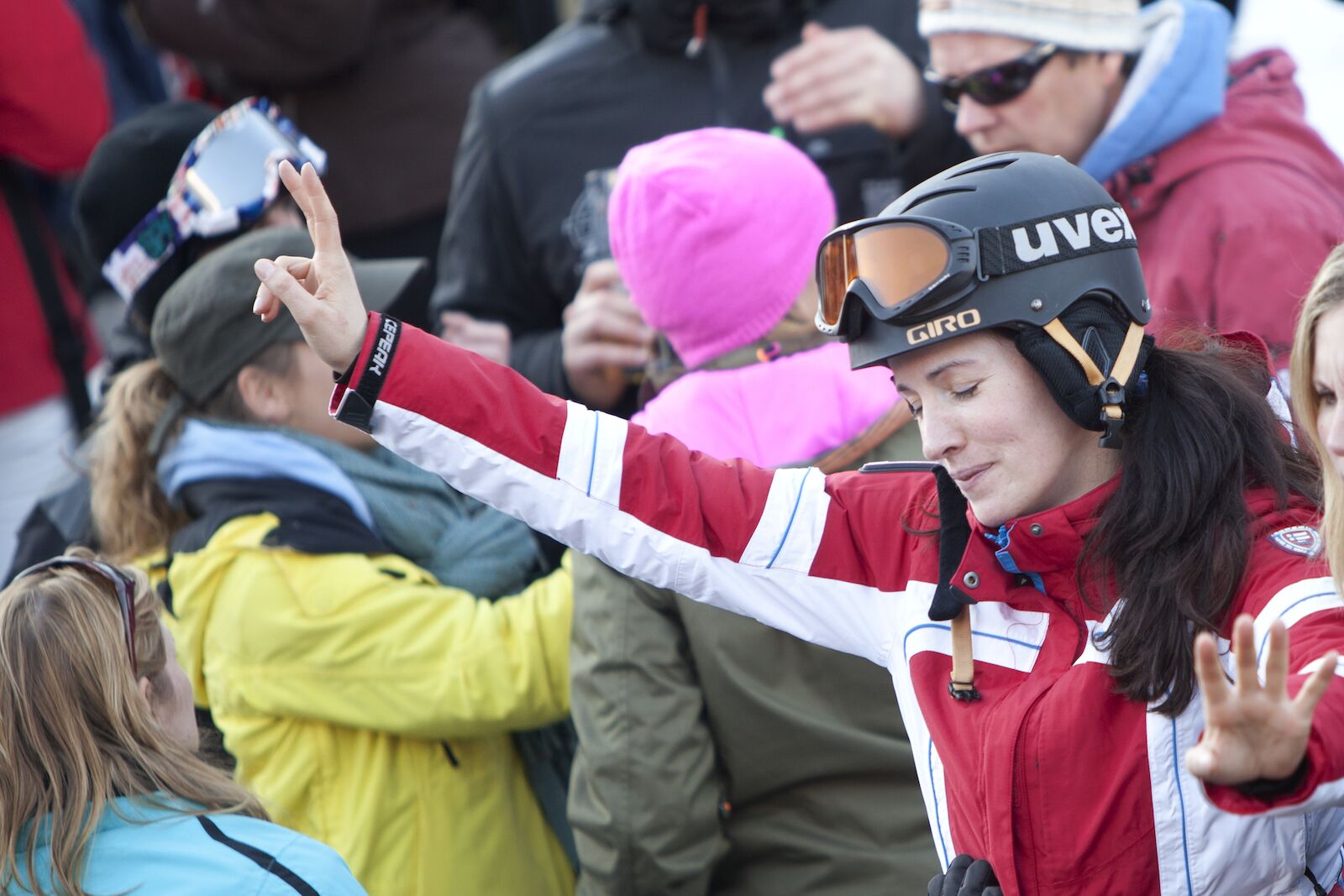 “They go skiing in outfits just to wear to après,” noticed Caitlin, amused. She says she and her friend “sort of jokingly put funny sunglasses in our pockets or hats to wear at après to cover the helmet hair.”

Even though skiing down in the dark could lead to a bruise or two, the fact remains that most partiers aren’t driving home. For Nicolas, that’s one of the reasons that après skiing is so much better in many European mountain villages than in other countries.

“These European ski resorts, the reason they’re so charming is that there’s a town and you don’t have to drive everywhere, and no one has a car,” says Nicolas. “It means that everyone stays in the towns, and because you don’t need to drive, you can drink.”

A car is especially unnecessary in St. Anton since the trains from Zurich, Vienna, or even nearby Innsbruck stop in town. That makes it a top choice for young people, especially as it’s less expensive.

“Historically, St Anton is where students went, and wealthy families would go to Lech. And so that made it always the place where you’d have better partying, because there were 20-year-olds,” says Nicolas. He says the 20-year-olds, whether staying for a weekend or a season, usually bunk up in apartments to save money.

In general, skiing overall is less expensive in the Alps. Nicolas said he was shocked to discover that at California’s Palisades resort near Lake Tahoe, a single-day lift ticket could cost over $200. A one-day pass at St. Anton costs 61 euros, or around $69. 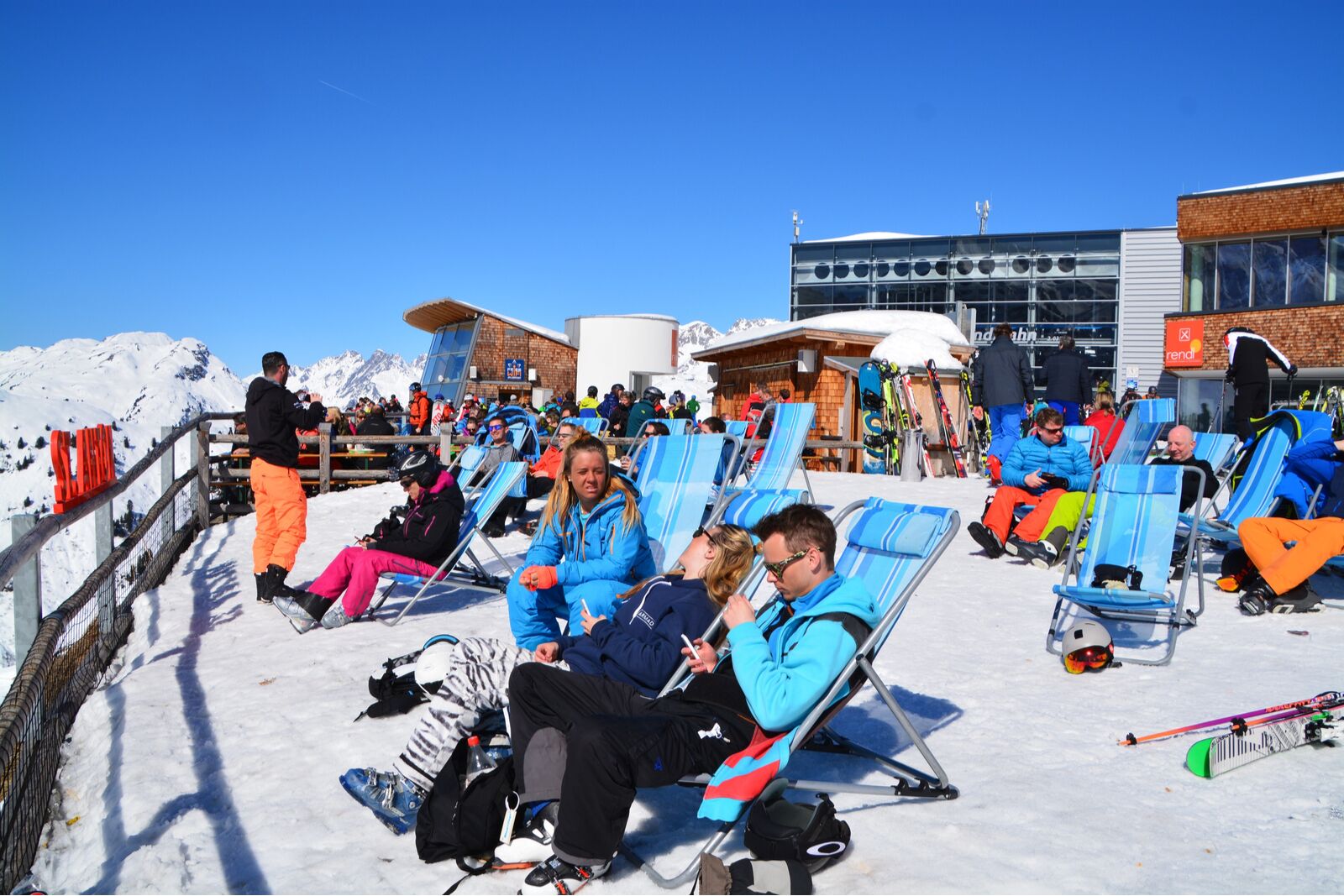 Nicolas thinks that’s another reason Europeans are more relaxed with their long and sometimes wine-infused ski lunches: they aren’t trying to get their money’s worth with as many ski runs as possible. And they’re ready to start the party early.

“The best part about après-ski partying is that you wind down,” says Nicolas. “People get really quite drunk [at après]. Like, you’ll have like five or six drinks at these places, and then you have dinner, you kind of eat off your drunkenness, and then reasonable adults go to bed.”