Most of Europe’s finest cathedrals and basilicas are made of stone, set in the heart of the world’s grandest cities, products built to showcase the power of the Catholic church.

In Norway, that’s not how it happened. Yes, churches were built. Yes, the same classic basilica plans were used. But the structures were built of wood and called stavkirker, or stave churches. These beautiful, often tiered, somber-hued giants stood tucked at the foot of quiet mountains, between meadows and farms, or along the banks of rushing fjords. Sometimes built over pagan sites, they depict a time when theologies were changing — Norse mythology was transforming, assimilating into Christianity — and the country itself was building a new way of life.

Despite their individual differences, each harkens back to a different era, when places of worship were a portal to another, godlier world. Resting in stark contrast to what we now consider “Scandinavian design,” they stand out, beacons of Norwegian — and world — history. Here’s the story behind the stave churches of Norway.

What is a stave church?

The word “stave” refers to how the church was built, with “staves,” or corner posts, and “stave walls,” wooden planks standing on sills. Fan out northwest of Oslo, and that’s where you’ll find the largest concentration of these historical structures, all built from around 1150 to 1350. Churches weren’t the only structures built from this tradition, either: About 250 wooden houses dot the country, and many include stave-built galleries or porches.

And though up to 2,000 stave churches were believed to once stand, the number is now 28. It’s not because of ruin over the centuries; this method of architecture largely protects against rot, wind, and rain (which explains how so many 800-year-old houses remain). Instead, they’ve simply been torn down, burnt down (tar and timber are a fiery combination), replaced, or renovated, particularly as Scandinavian minimalism, Protestant minimalism, light colors, and clean lines became popular.

The reasons behind the use of wood are simple. Apart from the fact that timber was plentiful, Vikings were incredibly adept at working with wood; they spent centuries building the world’s best boats. And as mainland Europe grew richer and built more and more impressive cathedrals, Norway stayed largely within its farm culture, living and worshipping in natural surroundings.

The oldest and the grandest 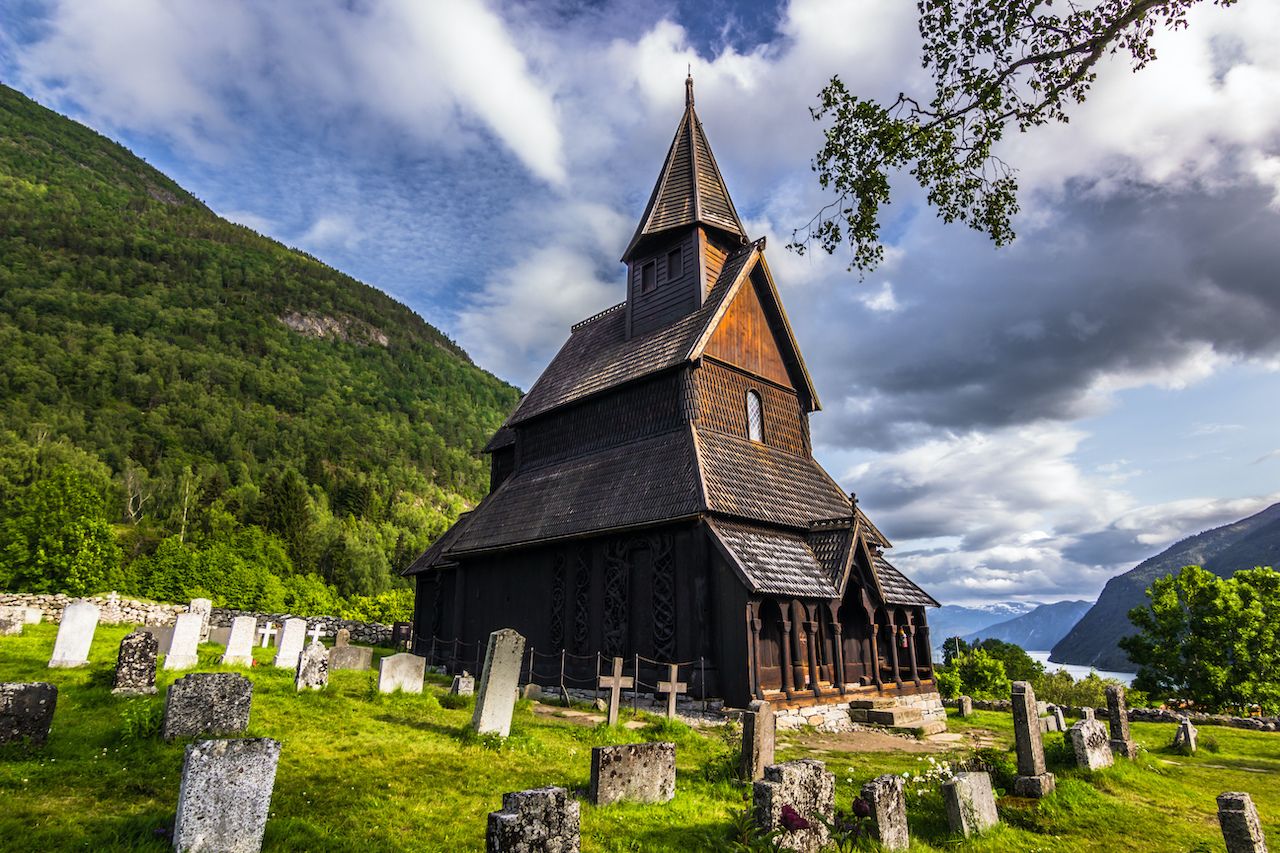 Urnes is Norway’s oldest stave church, built around 1130; drawings in the north portal, along with some timber, serve as proof that two prior churches were built on this site as well. Take one look at its spot — down a grassy hill, sitting on the edge of the Lustrafjord near the village of Solvorn, snow-capped sea cliffs across the water — and you might feel close to godliness, too.

Urnes is now a UNESCO World Heritage site, and it’s open to the public. Definitely pop inside, as the ornate carvings and strap-work panels showcase “Urnes style,” giving an even finer look into the era. It’s easiest to take the ferry from Solvorn, and you’ll also find a small gift shop and visitor center on site. 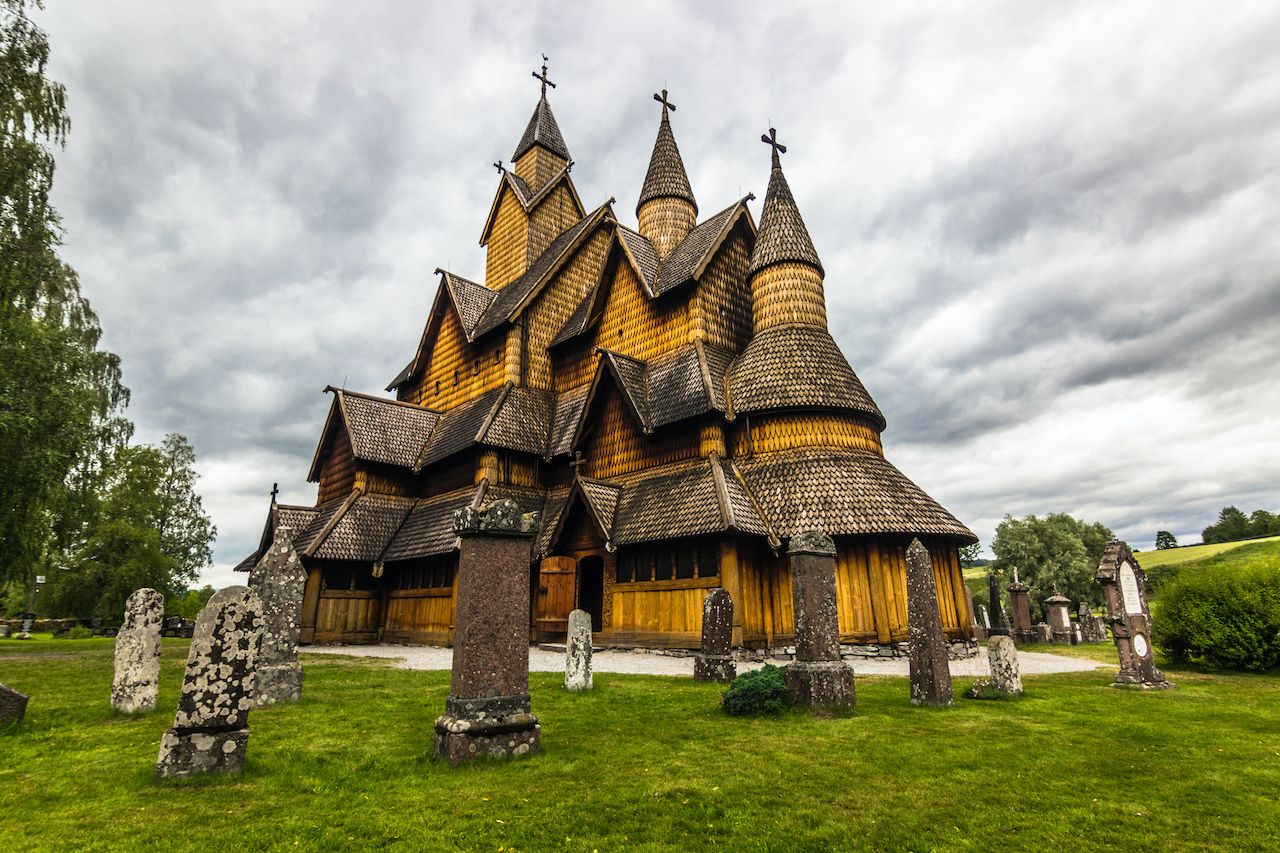 And then there’s Heddal at 85 feet high, 65 feet long, and 52 feet wide. It practically pops out of an episode of Vikings or Game of Thrones, its dark magnificence lording over the countryside, surrounded by a field of gravestones. Constructed in the early 1200s (legend has it by a troll), its triple nave is a pine masterpiece, its interior home to 17th-century rose paintings, a similarly aged “Bishop’s chair,” and plenty of symbols that ward off evil. There are four entrances — one each for men, women, clergy, and processions — though only one is still in use today.

It’s 80 Norwegian kroner to enter (roughly $8), and there are tours in both English and Norwegian. Heddal, just west of Notodden, is still in use, with weddings and services on many weekends.

Most of Norway’s still-standing stave churches are grand, dark-wood structures that seem closer to cathedrals and basilicas than churches. But a few are charmingly bucolic, fit for tiny villages from a simpler time. 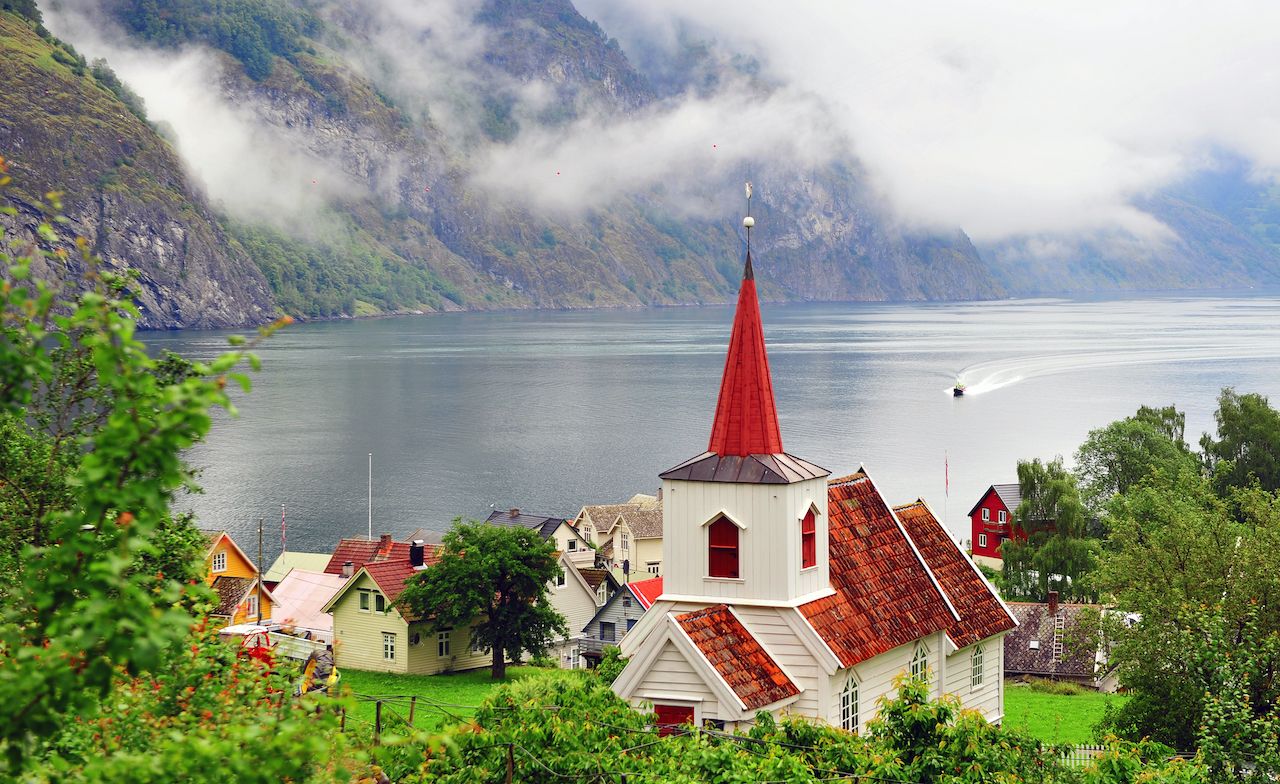 One great example of this is Undredal, built in 1147 as St. Nicholas Chapel. Its white clapboard sidings set it apart, and so does the fact that it’s still in regular use. Sitting on the edge of the Aurlandsfjord, it’s one of the smallest stave churches in Scandinavia, and it’s open in the summer to visitors. 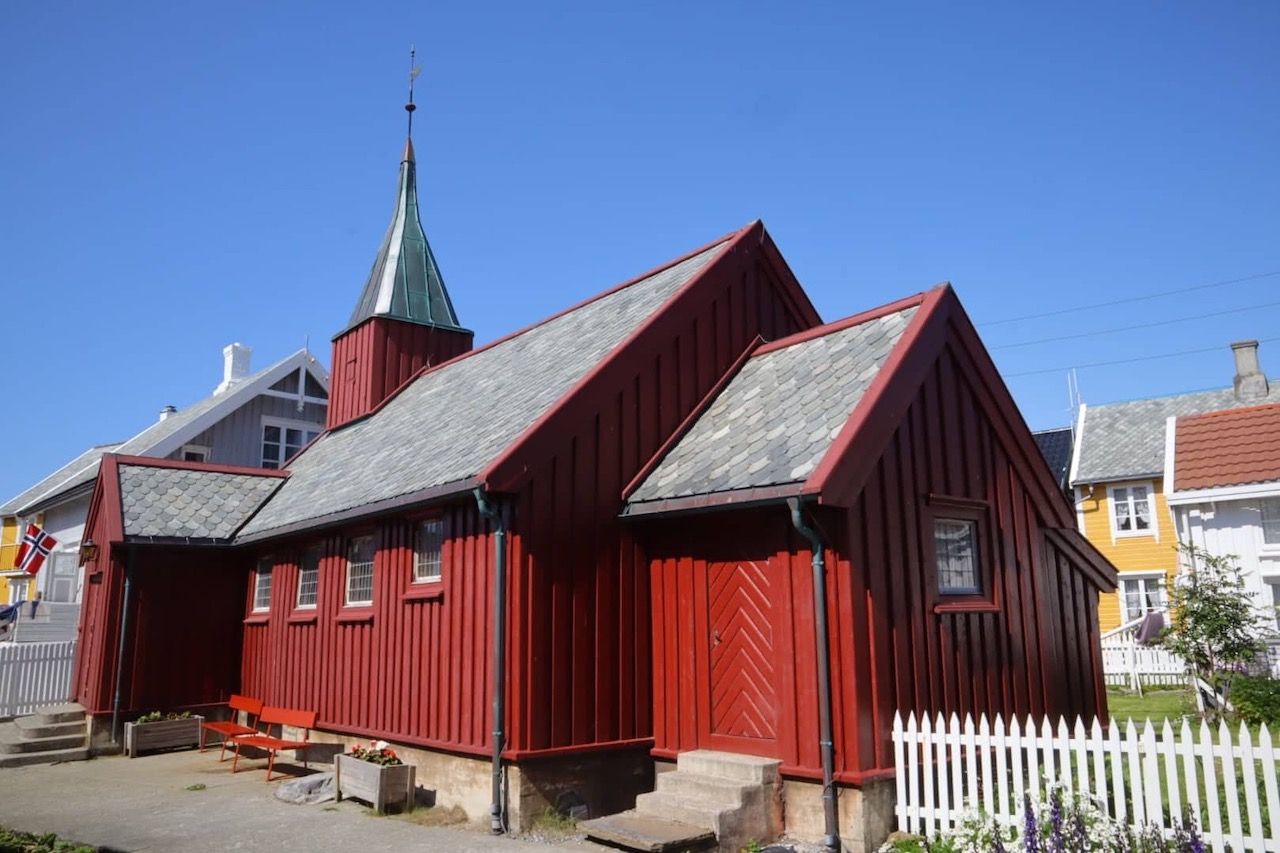 Grip also stands out, its island location, cardinal-red exterior, and fisherman’s history giving it a maritime vibe. The village of Grip is now abandoned, though houses still surround the church — unlike most other stave churches, which are surrounded by cemeteries. Surprisingly, the church is still in use every third Sunday in the summer and is open to the public. 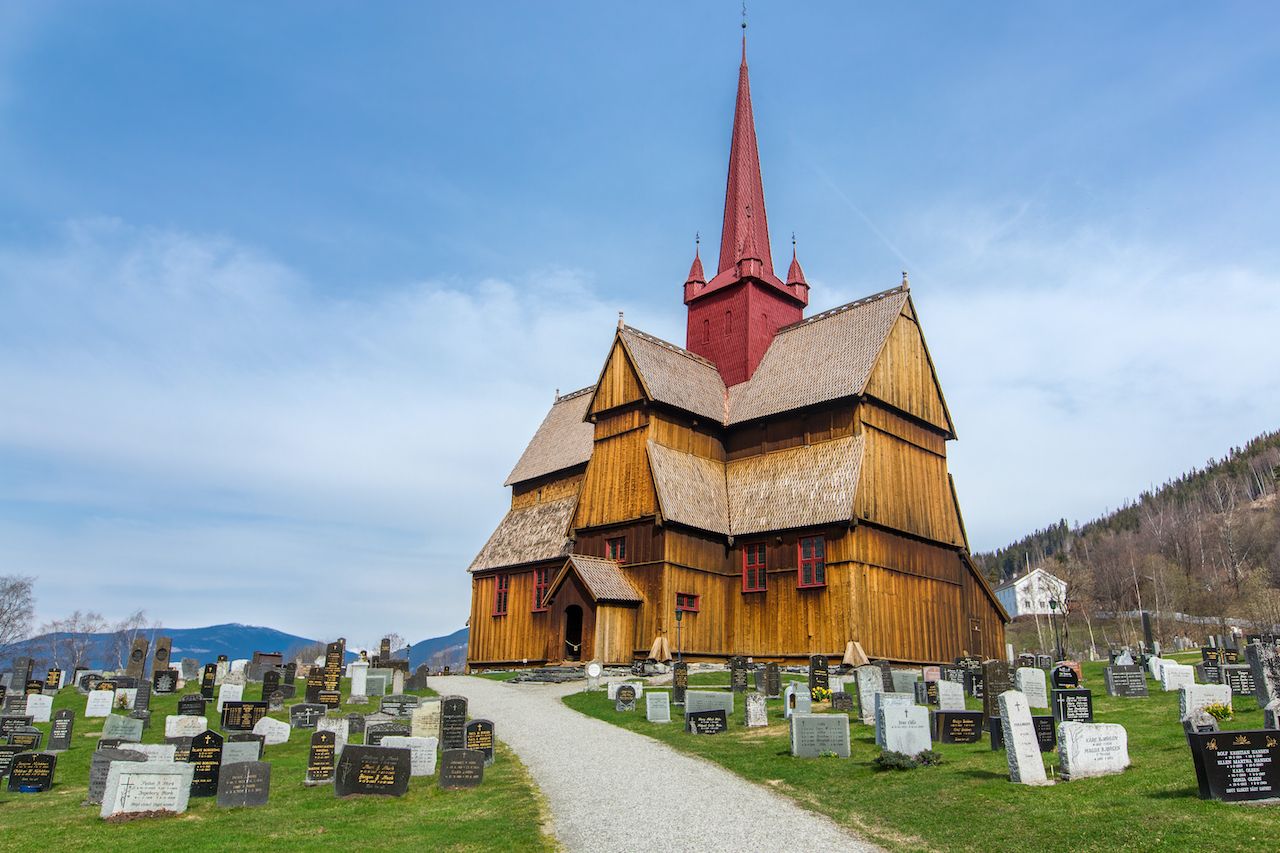 If you ever find yourself hiking the St. Olav Ways — Norway’s grand pilgrimage route to the Nidaros Cathedral — make a stop at Ringebu in eastern Norway. Though largely traditional, its giant red spire, lack of windows, and beautifully tended cemetery make it pop with beauty. It was built around 1220, and it’s open in the summer to visitors. Take a guided tour and ask to see the runes in the wall. 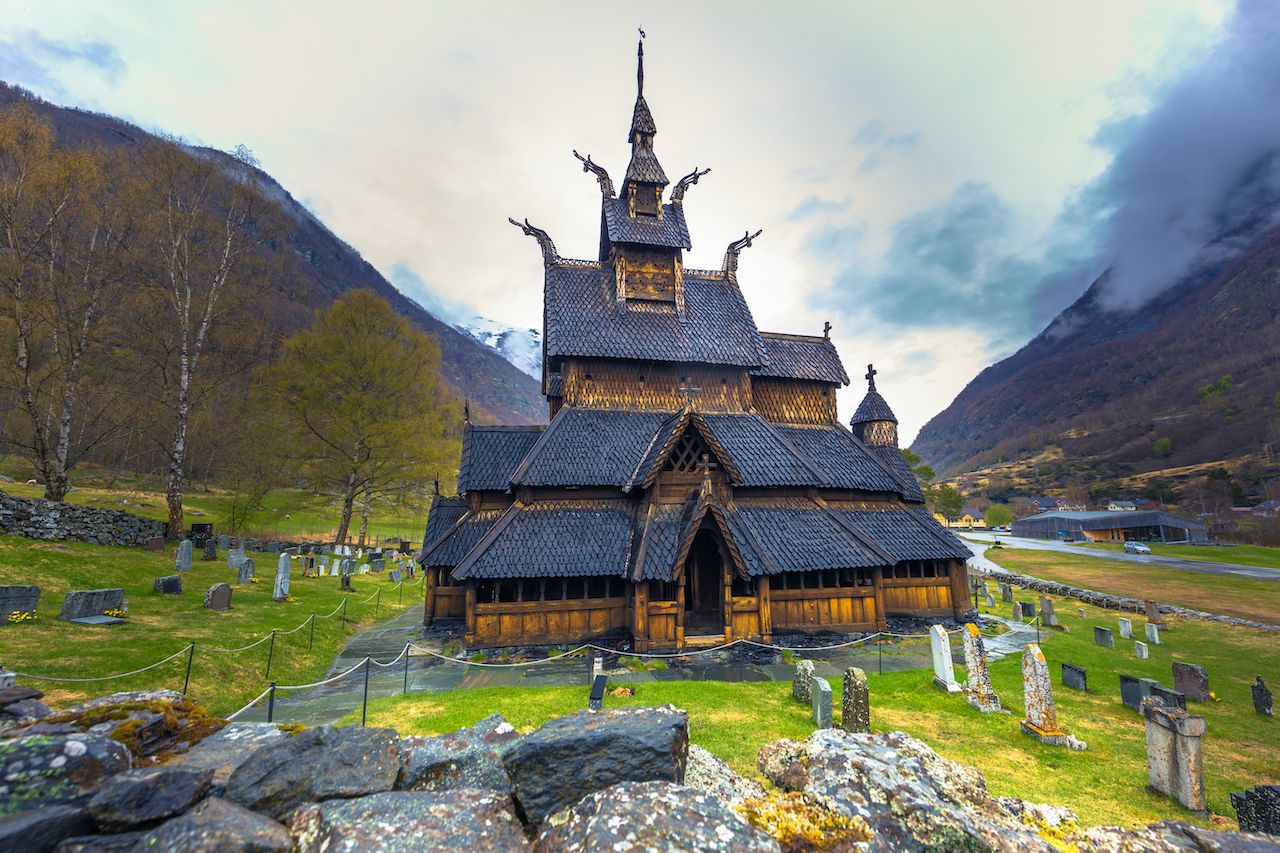 Borgund, on the other hand, looks nearly gothic. Built around 1180, its tiers are topped with dragon heads and its portals are lavishly carved. Stepping inside, you’ll notice that this particular church is a bit more distinct than the others, a true window to another time. The church now serves as a museum and is open seven days a week with an entrance fee of 100 kroner ($10). 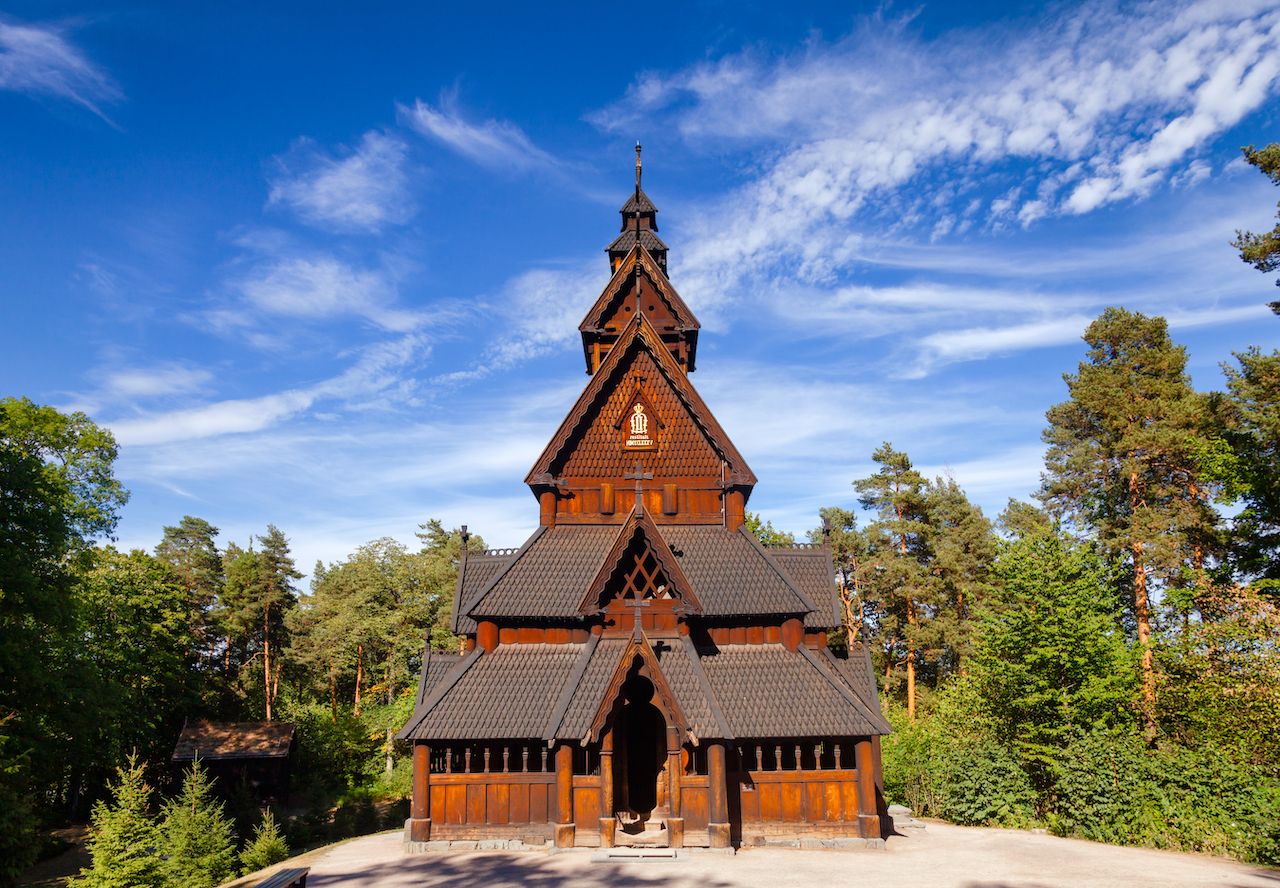 Last but not least is Gol. Technically there are two stave churches that fall under this name. One is the original, sitting in Oslo’s Norwegian Museum of Cultural History, and was relocated and restored around 1880. The other is a modern replica, in Gol itself. The original dates back to 1212, a wide, five-tiered structure with delicate, ornate carvings everywhere you look. Luckily, the Society for the Preservation of Ancient Norwegian Monuments has been around for over a century, protecting these structures from deconstruction.

Twenty-one other stave churches exist around the country, all worth a visit in their own right. Together they may blend as one, but move from their ancient, timbered tiers to the Romanesque and Gothic Nidaros Cathedral to the fine, slanting lines of the Oslo Opera House, and you’ll have an architectural journey to remember.