The first time I tried durian, I was 13, sitting in the back of my maternal grandfather’s van as we drove around Manila. He had moved there with his wife, a Filipina woman, and their young son, and this was my second time visiting. Someone might have vaguely mentioned the smell of durian might be off-putting, but what I recall the most is hearing that durian is the most delicious fruit in the world — that what I was about to taste would change my life forever. So when a relative handed me split open fruit so I could scoop out the custardy insides, I wasn’t focused on the smell — just the briefest whiff of funk from what I recall — but that indelible flavor: nutty, tangy like vinegar, reminiscent almost of melted cheese, followed by the creamy sweetness of a banana. Others, I think accurately, have compared its flavor to whipped cream, caramel, and garlic.

In other words, nothing like how a recent New York Times article about fruits native to Southeast Asia, which focused on Thailand, described durian. Not “deep, dank rot” (durian), not “bland mush” (dragonfruit), not an “exercise in disappointment” (mangosteen), and certainly not “yummy” (rambutan), the weakest possible word to describe the complexity and depth of the fruit that grows in this region. As food writer Osayi Endolyn points out in a series of Instagram stories breaking down The New York Times article, these subjective statements don’t appear in an op-ed but are presented as foundational and factual in a news story.

I’m a quarter Indonesian. My father immigrated to the United States from Holland; his family fled Jakarta after the Netherlands acknowledged Indonesian independence in 1949. By coincidence, I have family friends who live in Bali (which considers itself a separate entity from the mostly Muslim rest of Indonesia), so I’ve had a few opportunities to return to Southeast Asia in adulthood.

Treks through outdoor markets on these visits were common. Here, women carry massive bags of blue and pink flowers, which are placed inside trays folded from palm leaves to create canang sari, daily offerings made by Balinese Hindus. Purple, red, green, and yellow produce is piled high in plastic baskets. I visited a market in the mountains that sold palm-sized baby rabbits in cardboard boxes.

What I remember most about these trips — besides the sweltering summer heat, the garden overrun with frogs outside the guest house where I stayed both times I visited, and the intricately patterned sarongs we wore everywhere — is the fruit. In particular the slices of lime green unripe mango sprinkled with salt, tart enough to make your cheeks literally pucker, which street vendors sold in plastic bags from mobile carts. And the fresh coconut, so cloyingly sweet and rich, drunk first thing in the morning straight from the broken shell. 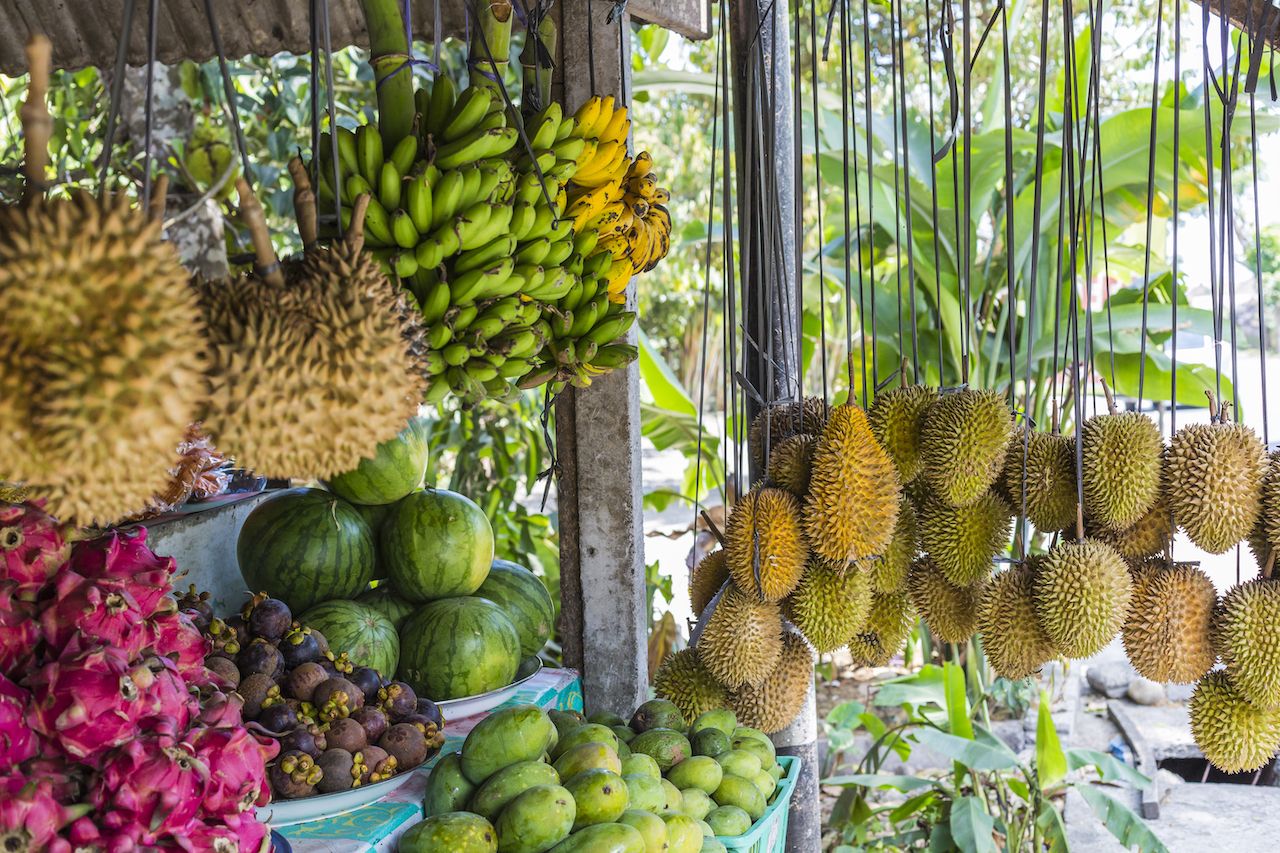 The awe-inspiring vibrancy of Southeast Asia is rarely the subject of mainstream Western travel and food writing. A quick Google search found that durian has been described as smelling like “a bunch of dead cats,” “pig shit,” and “sewage mixed with gasoline.” For me, the comparison of Southeast Asian food with rotting things and garbage stings the most. Talking about the food in this way reinforces the Western idea that the region is just open sewers, stray dogs, and dirty kids running barefoot through the streets. These ugly and narrow ideas about the home of my ancestors make me shudder — and to see these sentiments echoed in The New York Times is beyond disappointing and disrespectful.

Here at Matador Network, we’ve done it too, publishing stories in the past that call durian “weird” and parrot claims that an entire plane was grounded in Indonesia because of a “stinky” batch of durian. While intentions weren’t malicious, these editors didn’t think critically about how that language further stereotypes a region that is already associated, especially in the minds of white people, with being dirty, impoverished, and even primitive. Whether you think durian smells or not, and even I can’t deny it has a pungent odor, this framing is racist.

Why don’t we read more about Southeast Asia’s diverse and complex relationship to religion, its temples and ancient ruins, its love affair with decadent coconut and mango desserts in Western food and general interest publications? I suppose those topics would require more research than simply writing that durian stinks and calling it a day.

Writers and reporters in the travel and food writing industries need to ask themselves why they insist on othering food that is unfamiliar to them personally. There are millions of immigrants here in the United States for whom that food is not foreign. So who are these characterizations for? Perhaps they only serve white people who would rather remain comfortable in their belief that Southeast Asia is some “exotic” (another word I hate) and dangerous land, nothing like the “civilized” US — where we eat meat tubes slathered in industrial yellow and red sauce on our national holidays.

It is imperative that travel writers covering this region and its cuisine approach it with the reverence, curiosity, and open-mindedness that it deserves. Lazy writing about Southeast Asia is actively harmful. It pushes a cuisine that for 655 million people is an everyday fixture of life, not the strange and bizarre food The New York Times would apparently have you believe it is, even further to the margins in the Western imagination. What it deserves is the depth of understanding and nuance afforded to French cheeses — which, by the way, could be described in just as stinky terms.

White supremacy has clawed its way into every conversation and story about the food cultures of people of color. Our job as writers, but also as readers, is to call out and uproot that language everywhere we see it, and to demand that people of color and their cultures are no longer belittled, exoticized, and erased when there are so many opportunities to instead celebrate and uplift them.

MoviesWhy Does ‘Yellow Filter’ Keep Popping Up in American Movies?
Tagged
Food + Drink
What did you think of this story?
Meh
Good
Awesome