Scotland’s biggest cities are undoubtedly beautiful. Whether it’s Edinburgh’s Old and New Towns or Glasgow’s Merchant City neighborhood, the historic architecture transports visitors throughout the centuries, with cobbled streets, a medieval castle, and 18th-century warehouses, among many other features. But the real appeal of Scotland does not lie in its urban centers — it’s a rural affair. The wild, craggy, and green landscapes of the Celtic nation are speckled with spectacular villages, remote from the buzz of modern life, that will not only provide peace and tranquility to visitors but also a time-traveling experience that rivals the best seasons of Outlander. From an abandoned village on the isolated St. Kilda archipelago to a small fishing town in the Scottish Borders, here are seven places that are going to take you straight to Scotland of yore. 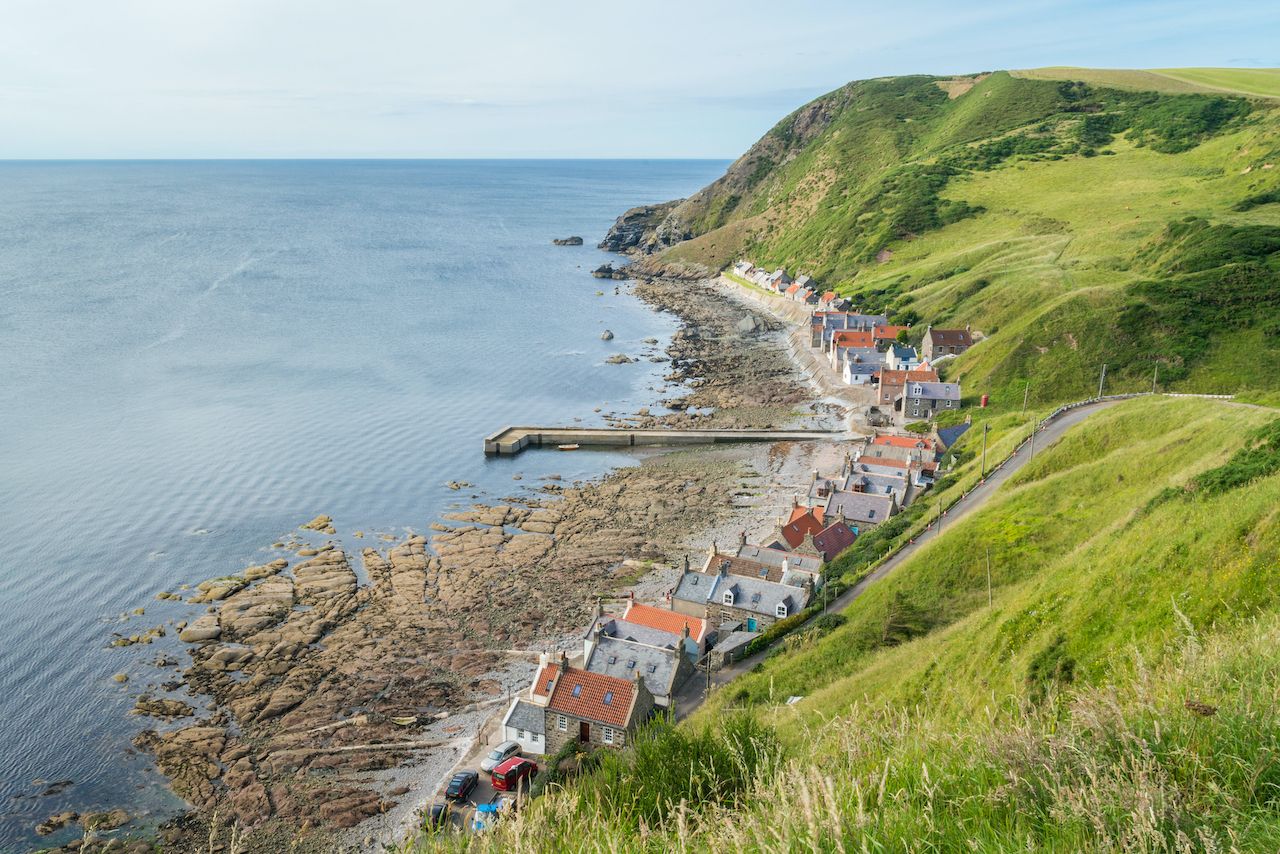 If you want to be by the water, few villages get closer than Crovie. Right on the edge of the North Sea at the very foot of verdant, rolling hills, the small fishing village is the stuff of storybooks. Of course, there’s no way you can — or would want to — drive around the village, so, like the locals, you’ll need to park either at the viewpoint on the cliffs above or at the parking lot just before the one and only steep road that descends to this slice of Scottish heaven.

The way down and up is rather steep, but breaking a sweat is the best way to appreciate Crovie in all its glory. Touted by Visit Aberdeenshire as “the best preserved fishing village in Europe, as well as the narrowest space between shore and cliff of any Scottish village,” Crovie sits across the bigger, but just as picturesque, village of Gardenstown where you can find accommodations for the night. The views should keep you plenty mesmerized, but head to Gardenstown for heritage sites,like the Kirk of St John, art galleries to peruse, and unexpected wildlife such as dolphins to be spotted in the bay. 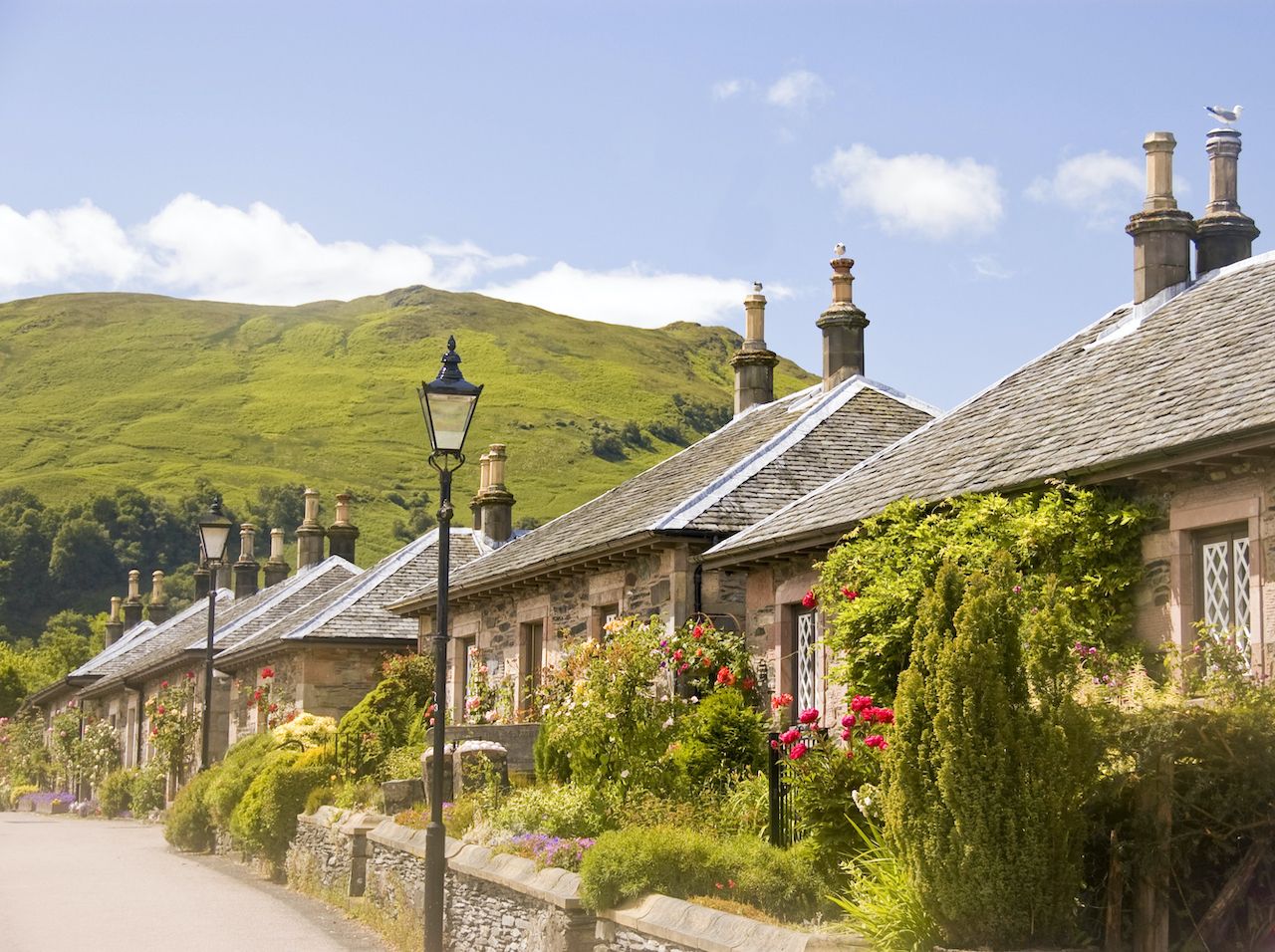 Luss can be busy with tourists, but don’t let the many visitors keep you away — they are here for a reason. The village is almost a cliché of Scottish rural life, with 18th- and 19th-century picture-perfect sandstone and slate cottages lining the streets in a way you’d only thought was possible on TV. Come spring and summer, another romantic touch completes the already-idyllic picture, with flowers growing on the facades and in the front gardens. After strolling the streets and (literally) smelling the roses, head to the local 19th-century church to take in its beautiful ceiling and stained-glass window. There, you’ll also see a graveyard with stones that are much older — the area was indeed settled in the Middle Ages. The village sits on the shore of Loch Lomond and is located within the Loch Lomond and the Trossachs National Park so the sceneries don’t disappoint, especially from the village pier. 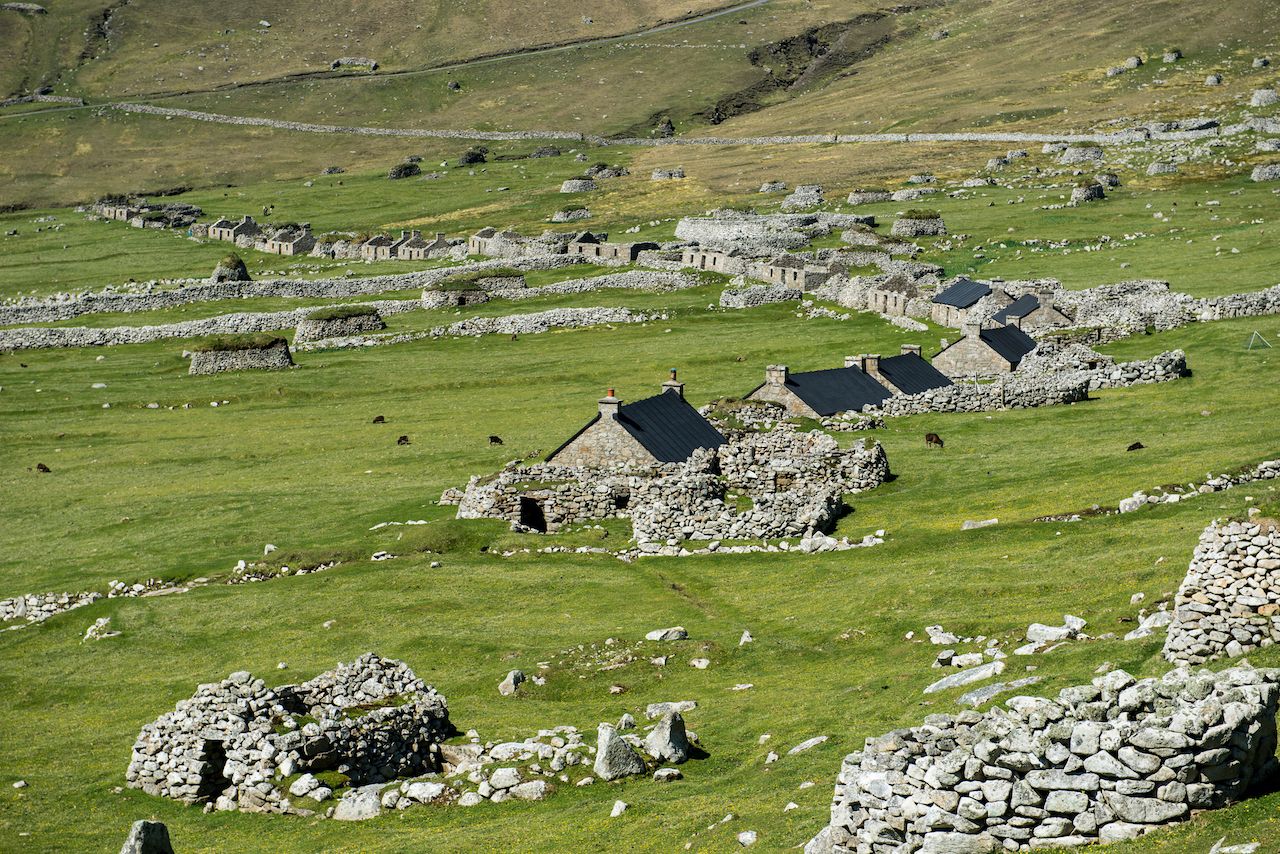 Hirta is the site of the only settlement that was in the remote archipelago of St. Kilda, a UNESCO World Heritage site comprised of four islands: Soay, Boreray, Dun, and Hirta, the largest. Although remaining structures on the island indicate that there was a human presence for 2,000 years, today, nobody lives on Hirta as all the inhabitants (fewer than 80 of them) were evacuated and resettled on the mainland in the 1930s.

Prior to the evacuation, the living conditions were extremely harsh on the island, and the people of Hirta did not eat any fruit and vegetables, only “oatmeal, salted fowl, and seabird eggs during summer and salted mutton in winter,” reports the National Records of Scotland. Although the village used to be made of vernacular thatched blackhouses, they were replaced in the late 19th century by 16 cottages with slate roofs all set up in one row, which visitors can still see today.

Despite being a ghost village, Hirta is very much worth the trip 40 miles west of the Outer Hebrides for those fascinated by the unusual history of the island, as well as for birders. The cliffs of the islands of St. Kilda are home to rare and endangered species of seabirds, such as puffins and Northern gannets, and Northern fulmar. Day trips to St. Kilda are possible with Kilda Cruises daily from the Isle of Harris. 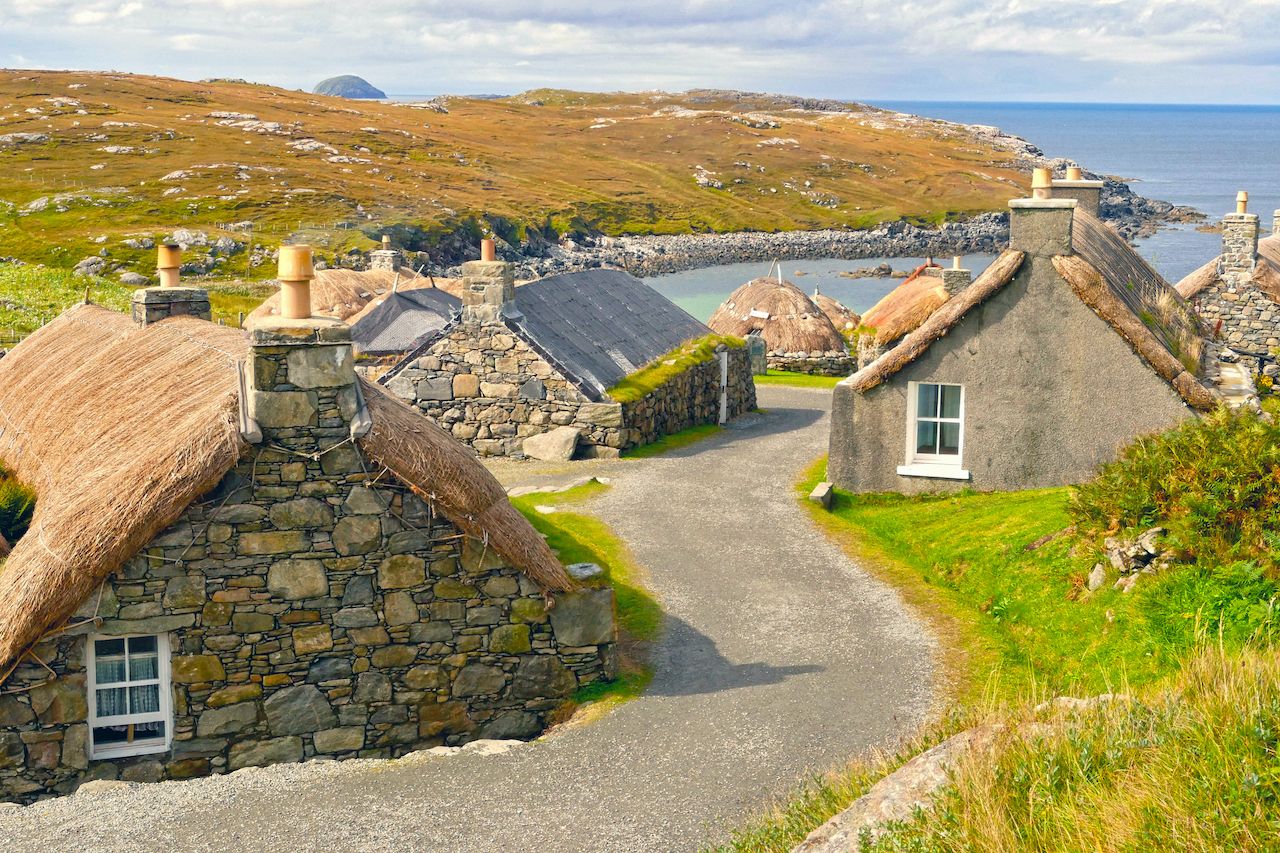 Blackhouses are homes made of drystones and thatch that used to provide shelter for both people and animals; this type of architecture was commonly found in the Scottish Highlands, the Outer Hebrides, and Ireland. Once on the Isle of Lewis, not only can you take in this beautiful architecture with stunning views of the Atlantic Ocean, but you can also stay in one of the blackhouses (and it’s very affordable), as well as partake in the fun historical activities and visit the gift shop and café, also set in the unique structures. Beautiful Dalmore and Dalbeg beaches are nearby, so make your way there for an eyeful of natural beauty, and be sure not to miss a trip to the famous and mysterious Callanish Stones located nine miles away. 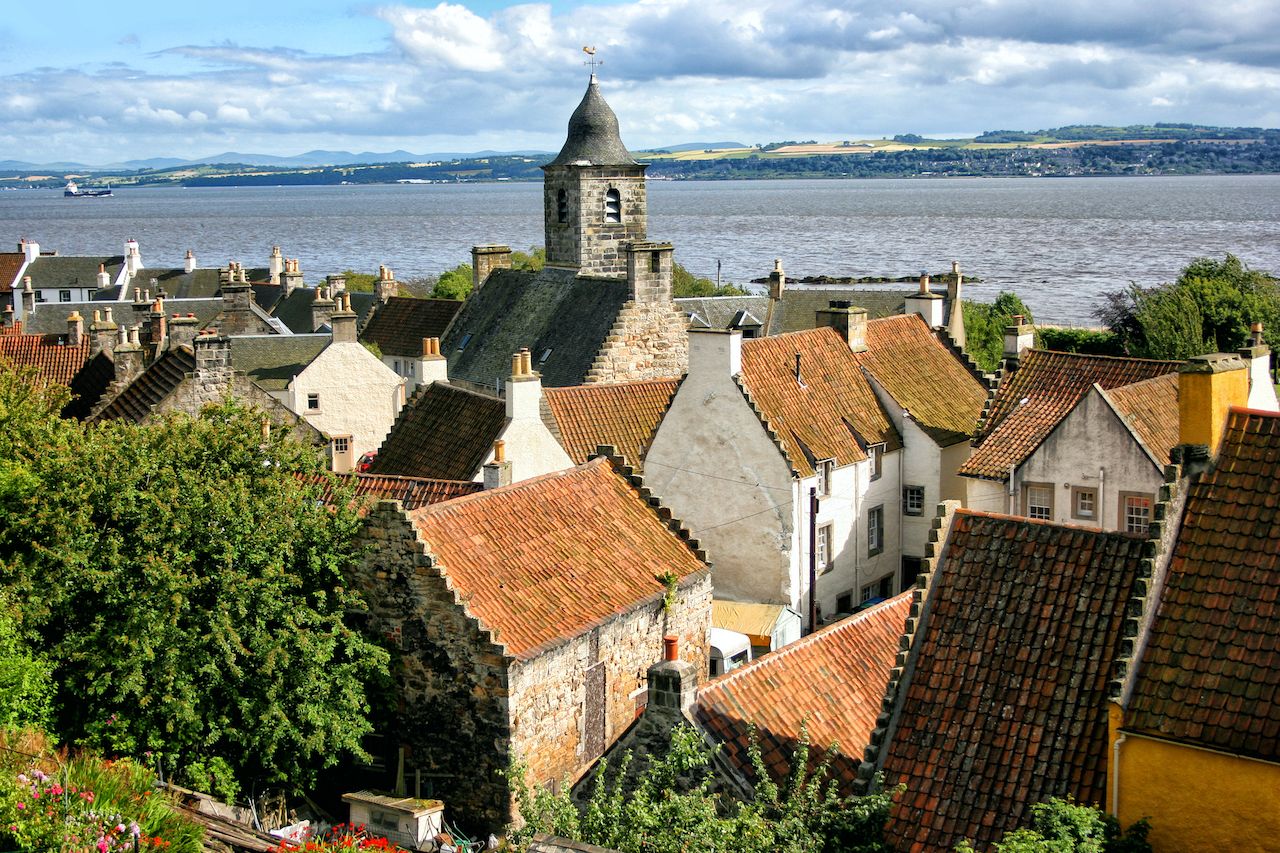 Located on the mainland, fewer than 25 miles from Edinburgh across the Firth of Forth, the Royal Burgh of Culross was actually used as a filming location for Outlander. Although the village is believed to have been founded in the sixth century, what is left is a beautifully restored 16th-century town full of cobbled streets, red-tiled buildings, and views on the estuary. Culross is part of the National Trust for Scotland, so it is protected to remain as authentic to its 16th-century version as possible. Make sure to check out the colorful Culross Palace and its garden, as well as the Town House “where witches were tried and held while awaiting execution,” explains Visit Scotland. The village is inhabited by around 400 people, so although it’s pretty, remember not to treat the place like Disneyland. 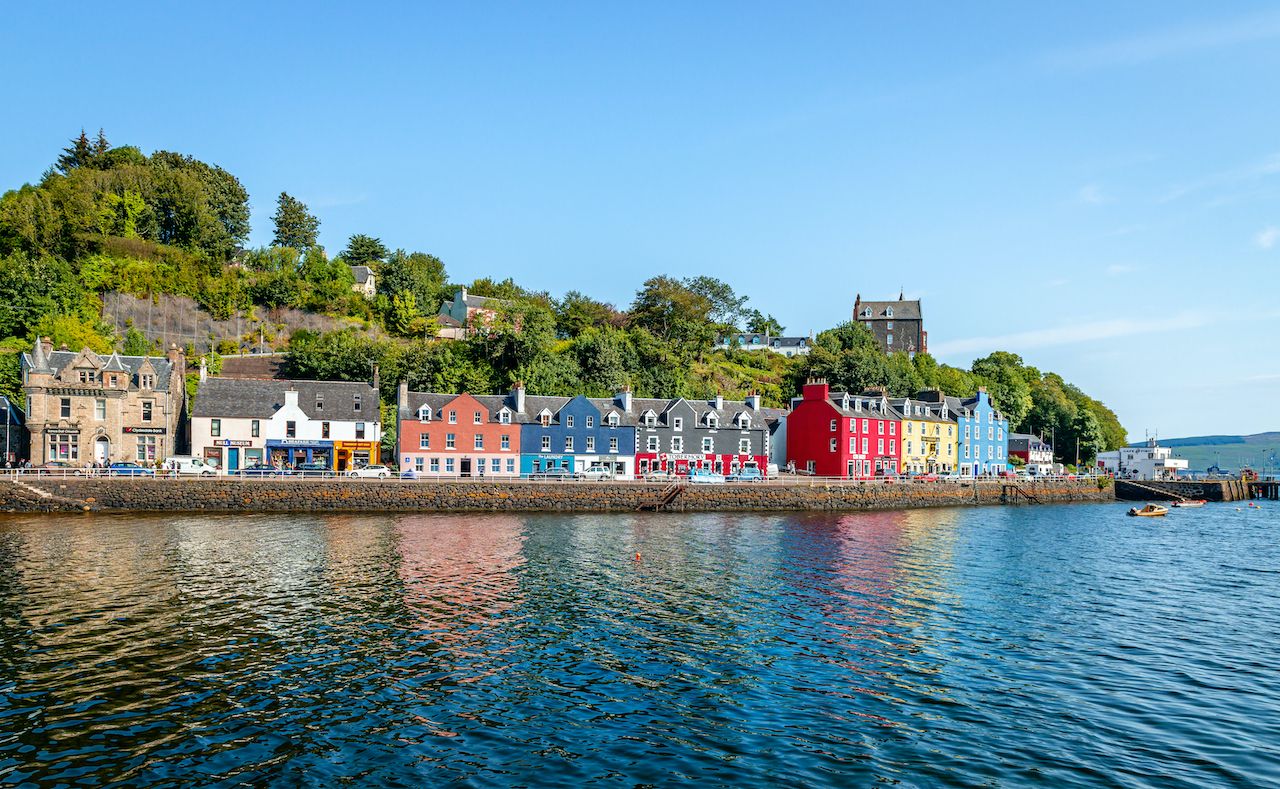 Located on the northeastern part of the Isle of Mull, facing the mainland across the Sound of Mull, Tobermory’s claim to fame is the vibrantly colored houses that line its main street and 18th-century harbor. Being the main town on the island, Tobermory has many shops and restaurants to visit, but the main appeal is not its commercial offerings. Wildlife watching in Tobermory is world-class, with chances to see not only rare golden and white-tailed Eagles but also Mull otters, whales, and dolphins — just don’t forget your binoculars. 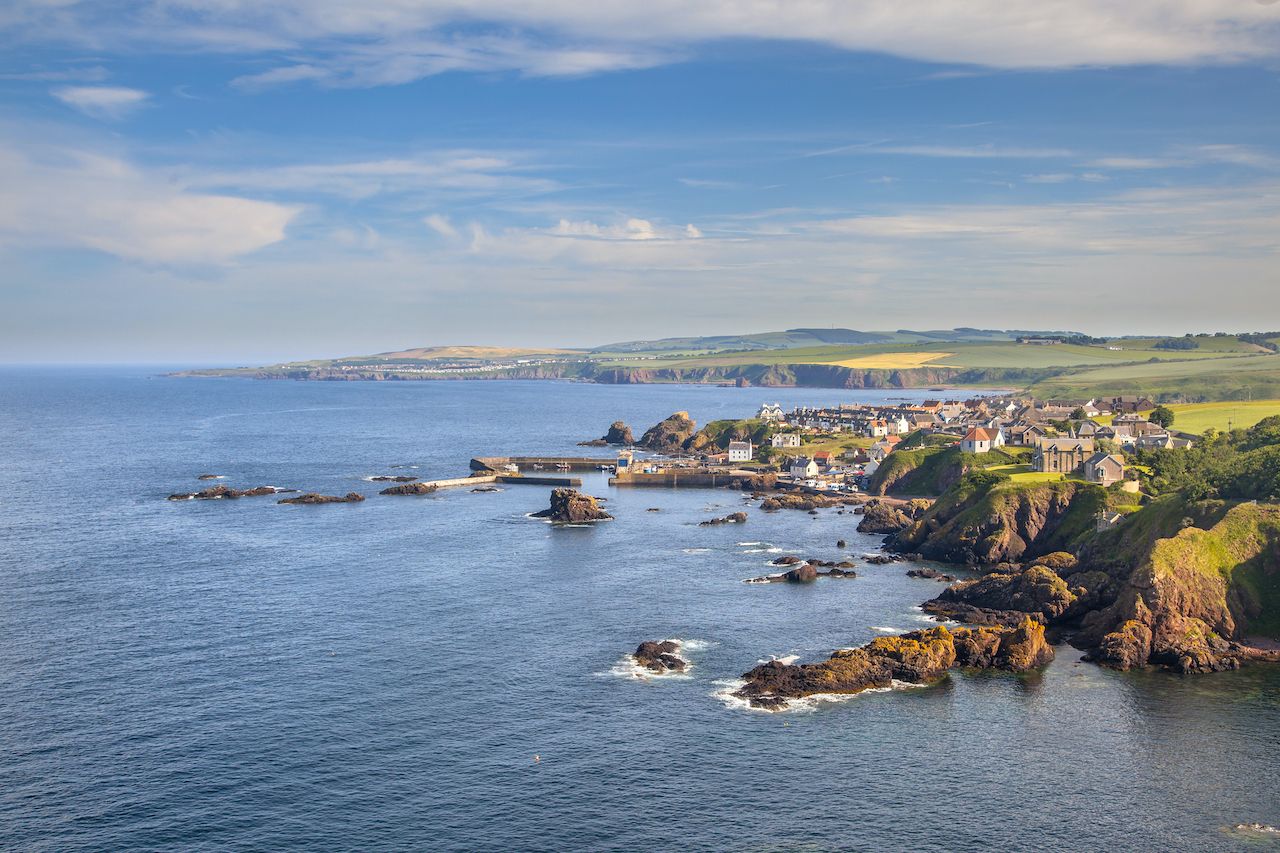 A fishing village on the North Sea, St. Abbs is what you expect from a coastal village in Scotland — cliffs, crags, and battering waves. For even more dramatic views of the splendid scenery, put on your hiking boots and walk the 2.5 miles from town to St. Abbs’ Head where the St. Abbs’ lighthouse is located. You can even make this spectacular spot your base as the lightkeeper’s cottage, perched high on a cliff above the sea, is available for rent. The St. Abbs’ Head National Nature Reserve is worth exploring to get some fresh air in the stunning scenery and see some of the area’s wildlife — such as seabirds — and wildflowers. If you’d rather walk on the sand, go for a chilly swim, or go surfing, make your way to Coldingham Bay, south of the village for a lovely beach.

BooksTransport Yourself To Remote Scottish Islands With These Dark Detective Novels
Tagged
Art + Architecture Scotland
What did you think of this story?
Meh
Good
Awesome