Places of worship — whether mosques, synagogues, temples, or churches — must be grand. They are, after all, meant to represent the glory of the divine on Earth. London’s Westminster Abbey and Istanbul’s Blue Mosque, to name just a few, are proof of the opulence of such spiritual structures. But although they must be striking, religious buildings do not need to be centuries old to be monumental and majestic — even contemporary churches can be so awe-inspiring that they stop both followers and atheists in their tracks. Here are seven 21st-century churches that would turn even the strictest traditionalist into a fan of modern architecture. 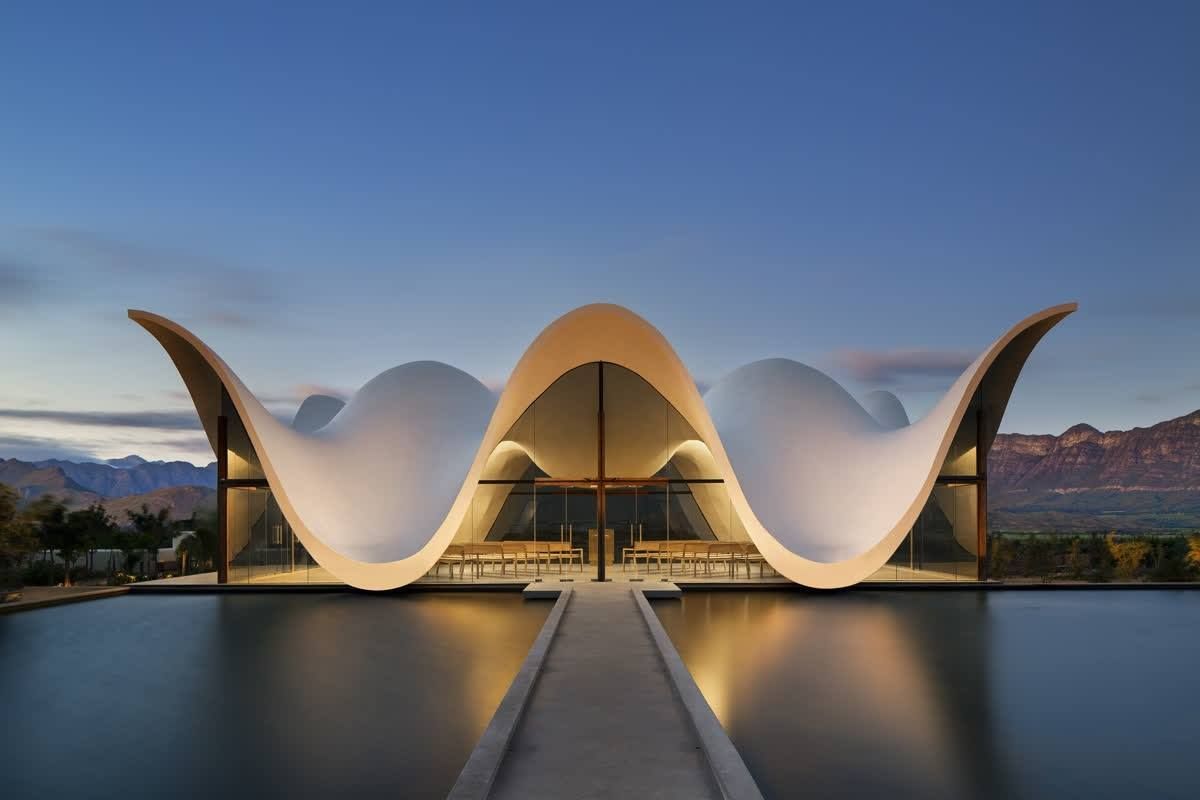 Although we tend to think that what makes a church a church is its spire-topped steeple, reaching high towards the heavens, the Bosjes Chapel is proof that we can do without one and not compromise the intended message. With a curvy white roof that looks like a cloud, and a facade made completely of glass, the Bosjes Chapel, part of the fancy Bosjes resort, seems to hover low above the tranquil Breede valley.

The entire front of the chapel, and the long and narrow path leading to the entrance, is surrounded by water, making the structure look even more surreal. From inside, the views are divine, indeed, as the unusual chapel was built in between the Slanghoek and Waaihoek Mountain ranges. Designed by Steyn Studio in London and completed in 2016, the Bosjes Chapel was inspired by Psalm 36:7, which reads, “How priceless is your unfailing love, O God! People take refuge in the shadow of your wings.” 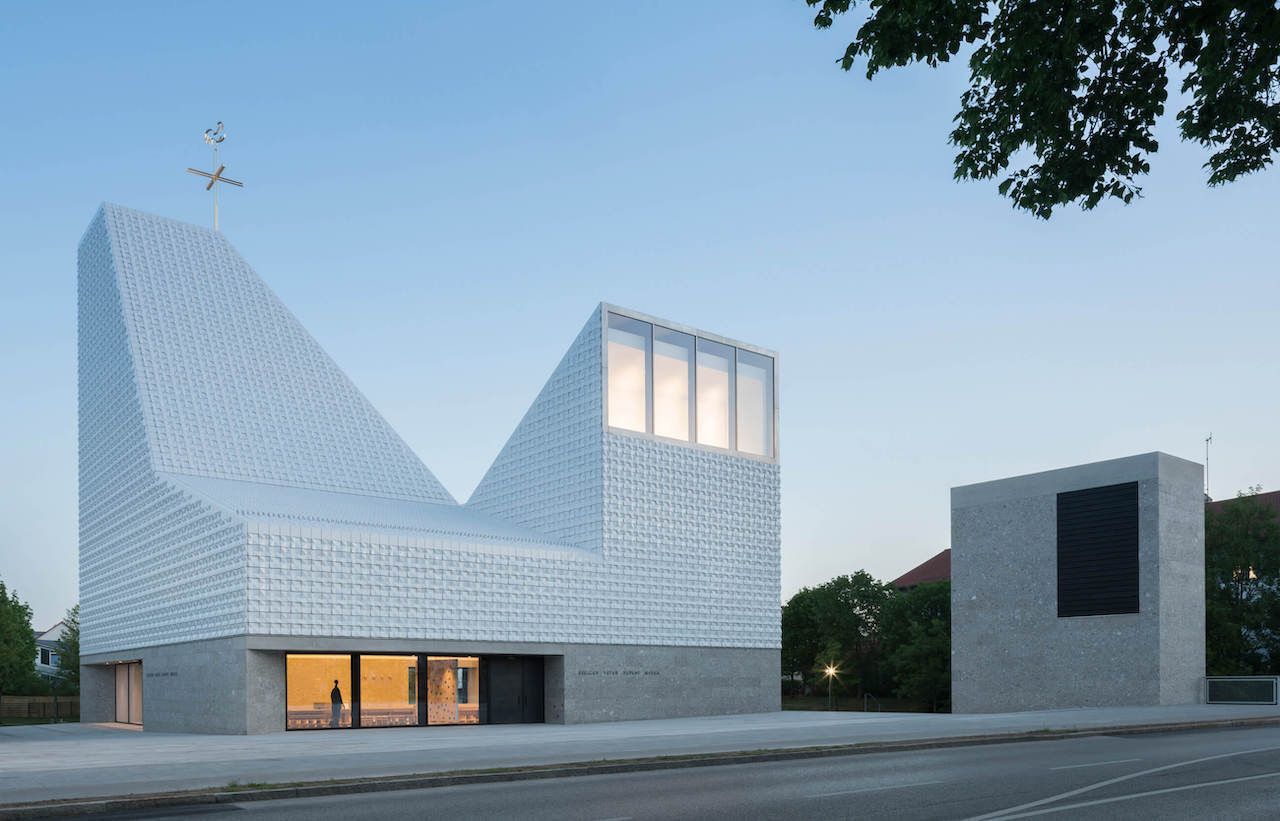 Completed in 2018, the Church of Seliger Pater Rupert Mayer is undeniably contemporary, with its sharp angles and unique materials, but if you look closely enough, you’ll notice that it retains the traditional elements of a steeple topped by a gilded cross and rooster. The rectangular church is divided into two elements: Its base made of grey, local stones, and its roof is covered entirely in three-dimensional ceramic tiles that catch the light in unexpected ways.

Inside is a reflection of the outside: There’s minimalistic decor with plain wooden pews; walls split into two materials and colors, grey stones and white plaster; and an angular white ceiling pierced strategically with windows to bring light into this ultra-modern church. The Church of Seliger Pater Rupert Mayer was designed by Meck Architekten and was the recipient of many architecture awards. 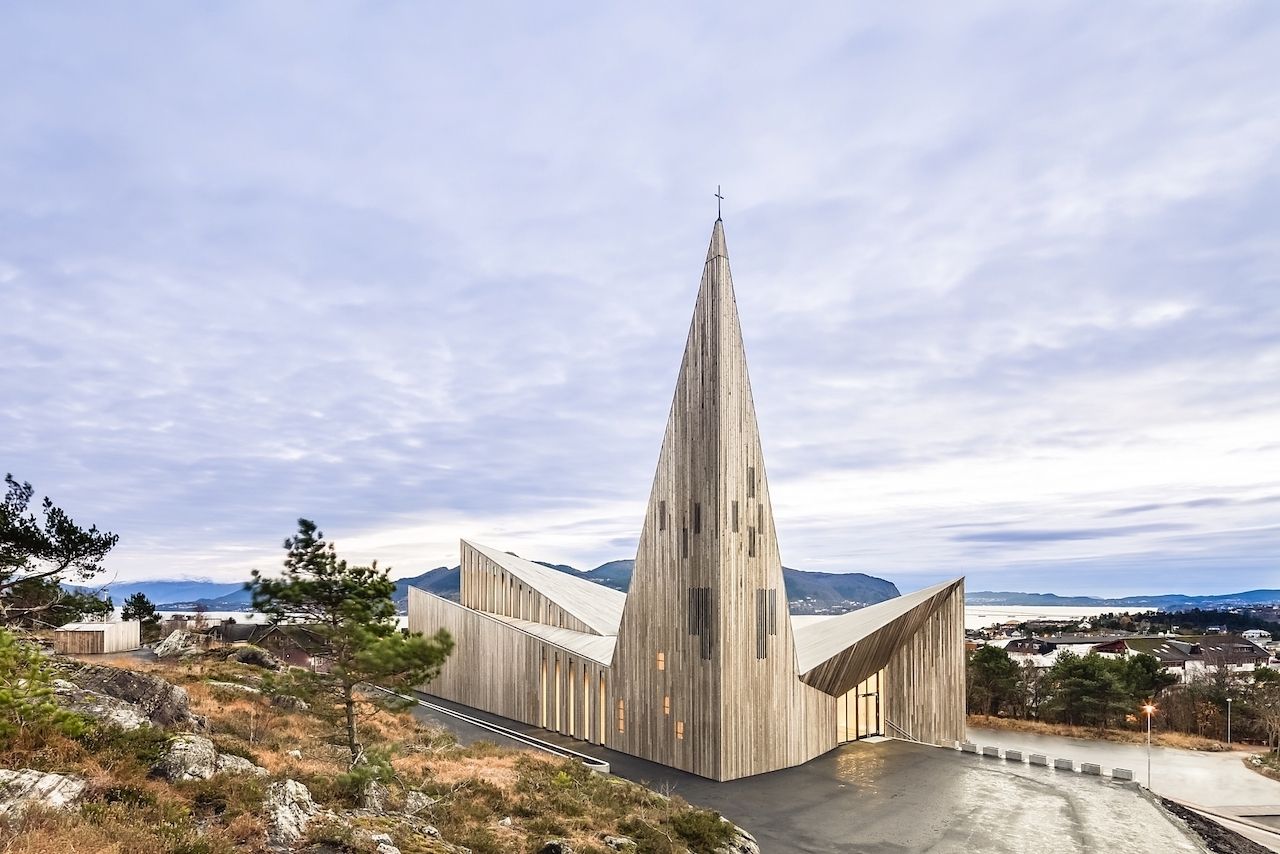 A modern take on the traditional stave churches of Norway, the Community Church of Knarvik is a seriously impressive structure. Just like its medieval inspiration, the church is built in timber and is as lofty as can be — its spire seems needle-sharp. But it’s the building’s location that makes it even more stunning; constructed onto a rock cliff, it looks down on the spot where four fjords meet. The outside timber — as well as the thin, long, and almost invisible windows — are arranged vertically to draw the church even more towards the sky. Inside, it’s all timber again and extremely plain, except for a colorful and round stained glass window behind the altar that breaks the pattern of sharp angles dramatically. Completed in 2014 by Reiulf Ramstad Arkitekter, the Community Church of Knarvik is one of many Norwegian contemporary churches. 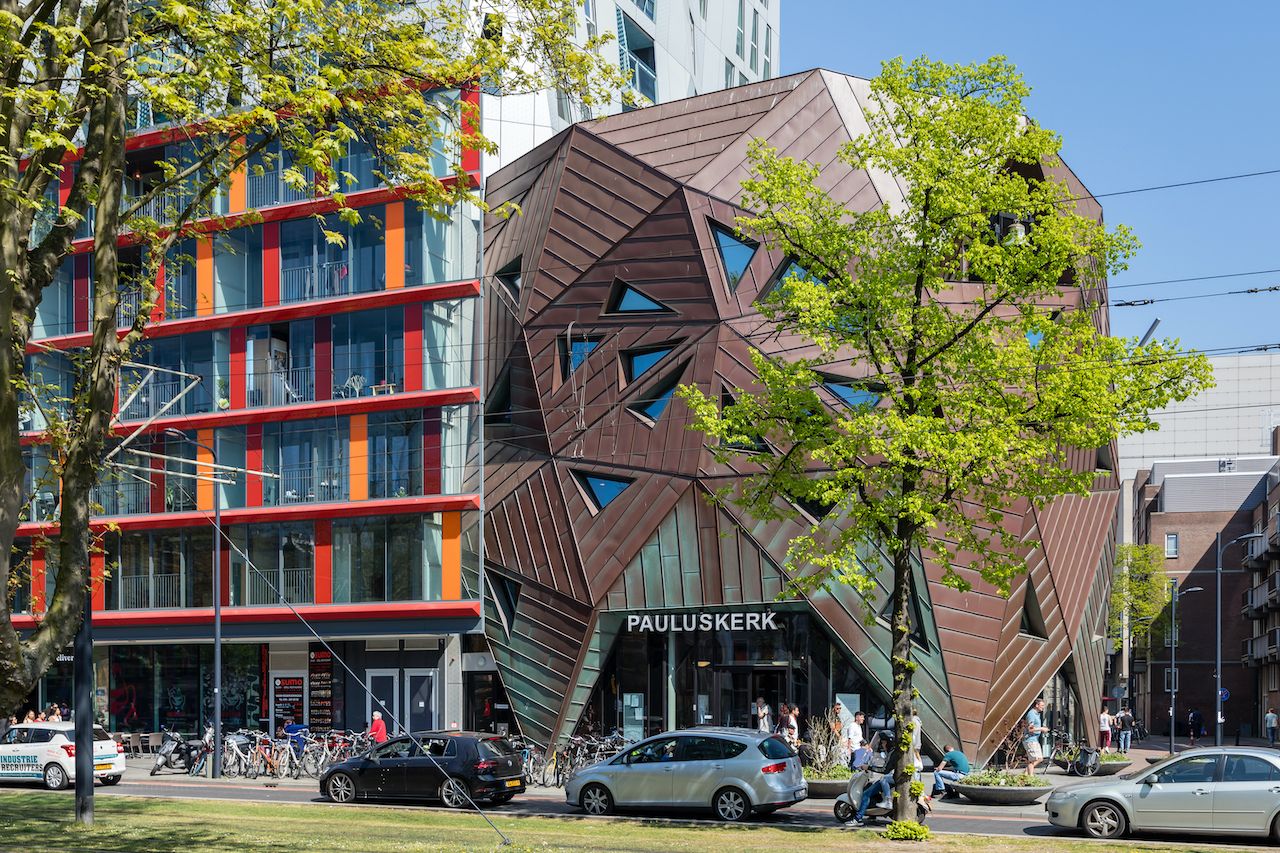 The work of the late and famous architect Will Alsop, Pauluskerk looks nothing like a traditional church, whether it is from the inside or the outside. There’s no elegant towering heights and no cross in sight; instead the church is a bulky multifaceted building consisting of triangular shapes, much like what you’d see inside a kaleidoscope but without the vibrant colors — the structure is completely brown. The only clue that you may be looking at a church is a bell, hidden within one of the facade’s triangles, but you’ll have to look very closely to find it. Inside, it’s much more light and airy, with tall ceilings, white walls, and the beautiful light coming from the triangular windows.

There are touches of color with bright red and yellow chairs, and an abstract mural. The altar, unexpectedly located in the center of the space, is oval, and the reading stand is discrete; the organ is the only indication of the function of the space. Pauluskerk was built in 2013 as part of a modern complex, including shops and residential accommodations, called Calypso. 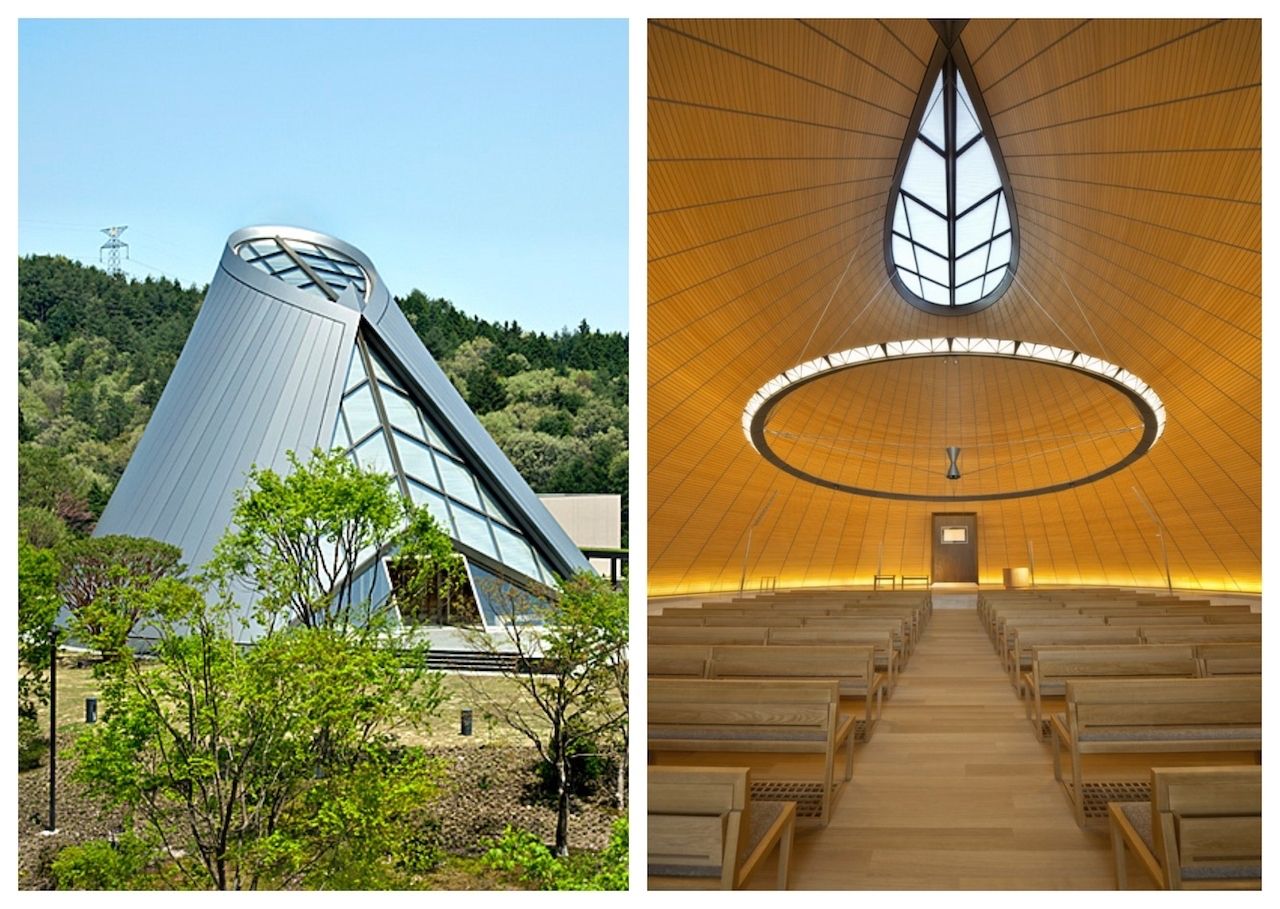 Funnel-shaped and made of stainless steel and glass, this unique chapel is located within the campus of the Miho Institute of Aesthetics and is undoubtedly the most striking building in the entire complex. Inside, the ceiling, walls, floor, and furniture are entirely made of timber, creating warmth as a contrast to the industrial look of the exterior. The conical shape of the structure and vertical lines created by the timber inside elevate the building further, while the zenithal window, shaped like a leaf, brings lights directly to the devotees below. There’s a ring chandelier, 40 feet in diameter suspended above the pews like a giant halo, to bring even more light and oomph to a chapel that does not lack any. A bold vision to strive for and a source of inspiration for the art students, the Miho Chapel is the last work of world-renowned architect I.M. Pei and was completed in 2012. 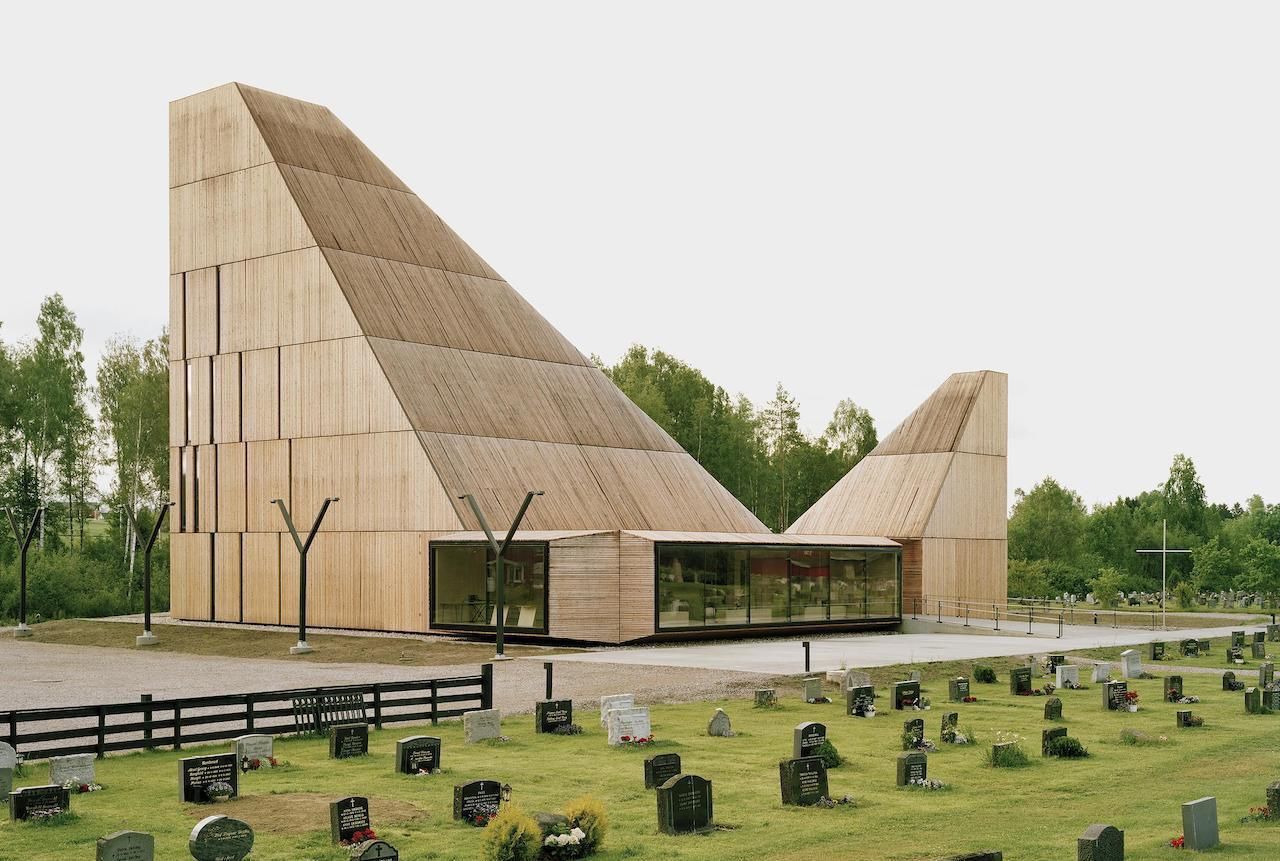 An architectural competition to replace the church of Våler was launched after it burnt down in 2009, having stood in the town since 1890. Over 230 proposals from 23 countries were received, but architect Espen Surnevik’s stunning design won and was completed in 2015. Clad in thin vertical strips of pine wood, the church could almost pass for a primitive structure made of straw, if not for its assuredly modern two pyramidal roofs and 28 windows. Inside, pale birch wood throughout (except for the flooring) keeps the space simple — even the lighting, consisting of hanging light bulbs, and the seating arrangement of single minimalistic chairs all perfectly aligned, are stripped of any extravagance. 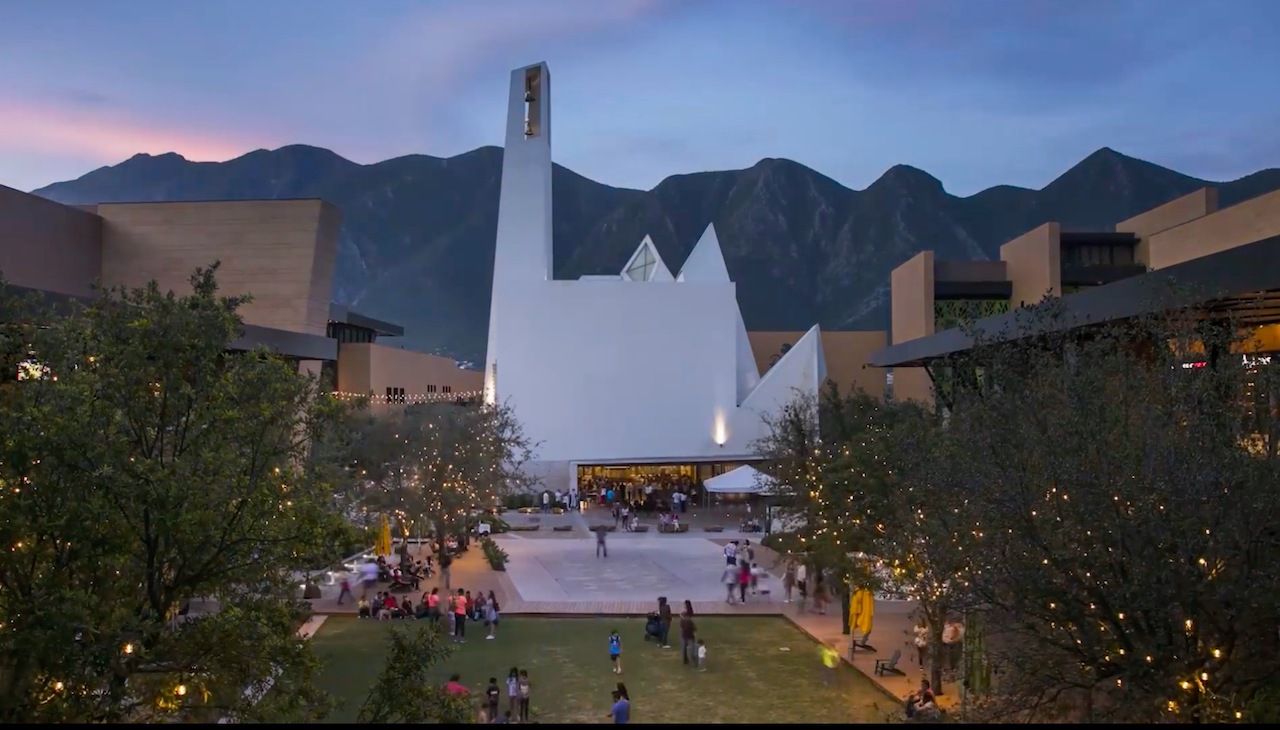 El Señor de la Misericordia contains all the elements of a traditional Catholic church: a tall bell tower (141 feet), a public square before its entrance, stained-glass windows, an altar, a nave, chapels, etc. But they have all been modernized to cement the religious building solidly in the 21st century. Painted white and adorned with striking angular shapes and pointed edges, the church’s exterior is solemn and simple, yet grand. Surrounded by mountains, the brightness of the church stands out, and the building acts as a stunning landmark for the city of Monterrey. Inside, the small but beautiful stained-glass windows display geometric patterns, and the effigies in the chapels and the confessional are all contemporary artworks.