It’s 8:30 in the morning, and the birds are out in force in Tirimbina Reserve in Costa Rica’s northern lowlands. The early morning rain put a damper on their dawn activities, and now dozens of species are busy in the canopy reclaiming what is left of the morning.

Standing on the 110-meter-long suspension bridge, 35 meters above the forest floor, we are right in the midst of all the action. We watch the adorable white-fronted nun birds, as they snatch insects in flight and return to their perches with the legs and wings of their prey still sticking out of their bright red beaks. 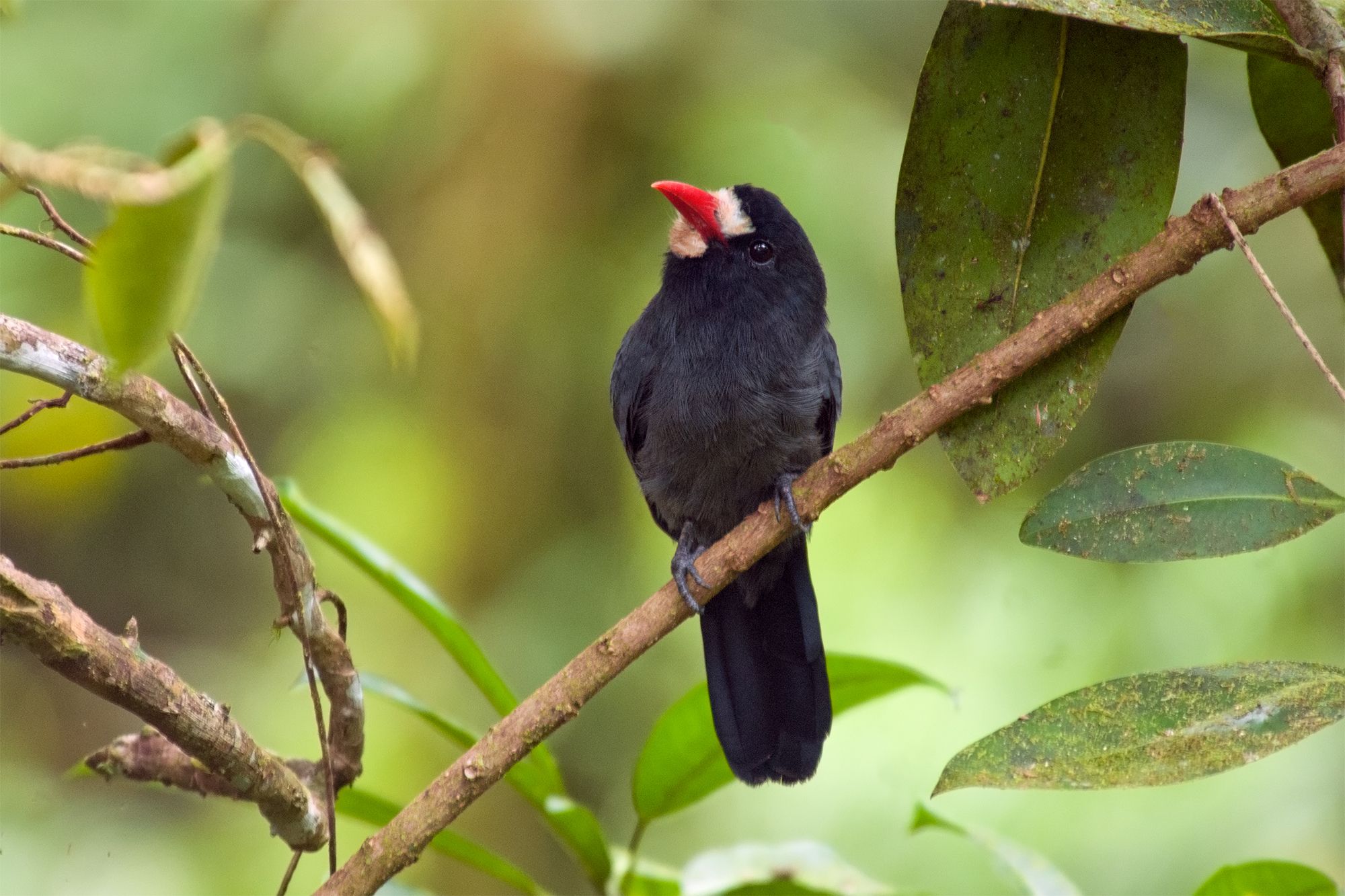 We are so intent on the birds that I get a fright when, out of the corner of my eye, I see a large shape approaching us along the support cable of the bridge. I turn around, and my fright is replaced with amazement and disbelief — a soaking wet and shaggy Hoffmann’s two-toed sloth is steadily climbing across the bridge.

It weaves its way around the vertical cables of the bridge, and as it swings sideways, we see the reason for its extra shaggy look — there is a young baby clinging to its belly. And even with the extra weight of the baby, the sloth is making impressive progress along the bridge. 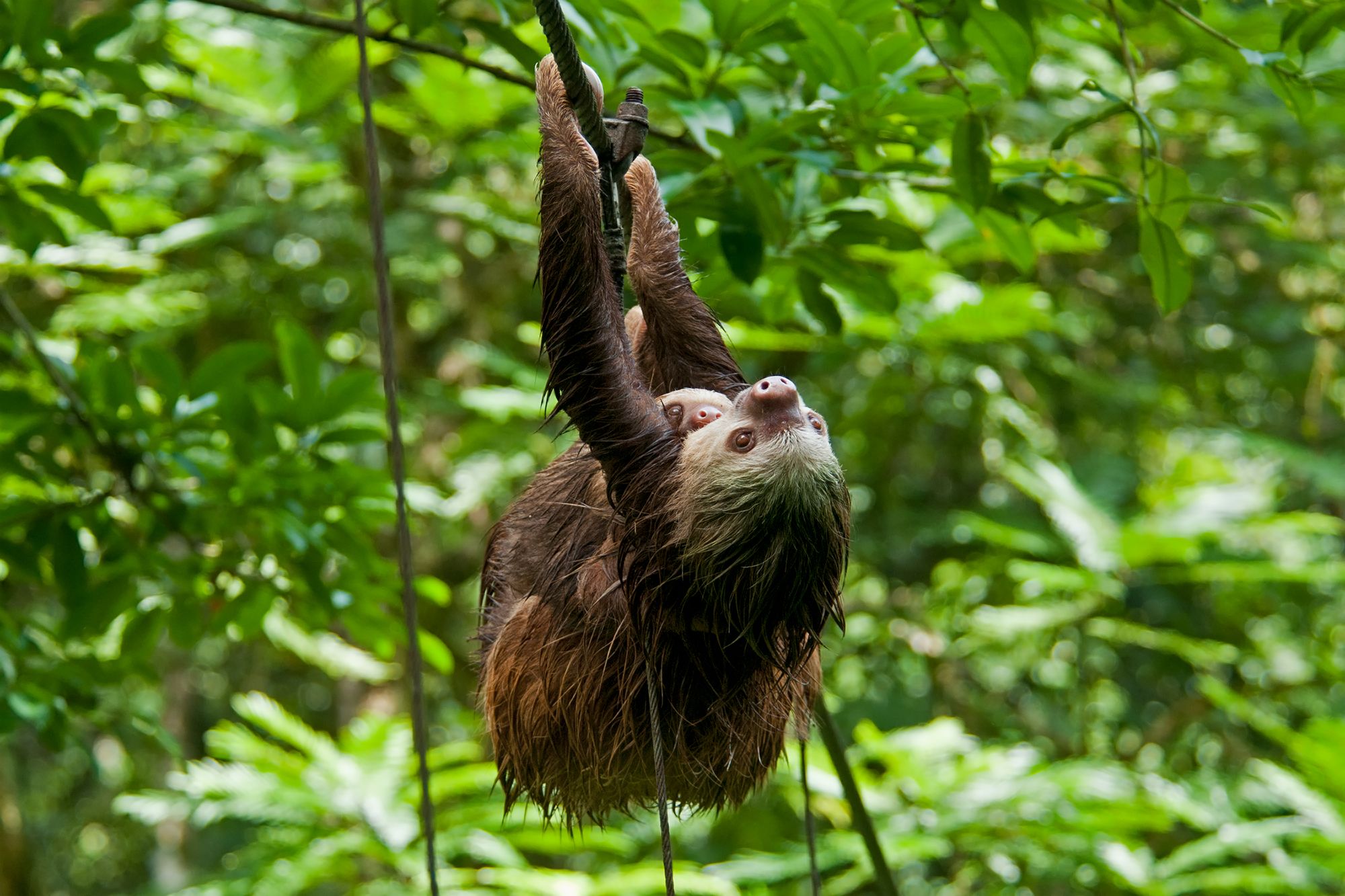 I am used to thinking of sloths as slow and lethargic animals. After all, they generally whiz around at the speed of 240 meters an hour.

Yet the sloth approaching us along the bridge is anything but slow. She expertly navigates the inconvenient terrain, determined to get to the forest on the other side of the bridge, despite the three of us standing in her way.

Without breaking her stride, she passes above our heads and soon reaches the other end of the bridge. Once she is level with the trees, she starts looking for a way to climb onto them, but there are only thin and wobbly lianas within her reach.

We are certain she will change her mind. There seems to be no way for such an ungainly animal to make this delicate crossing. But she proves us wrong. Without much hesitation, she grabs the closest liana, lifts herself up and with just a couple of movements she maneuvers herself onto the firm branches.

Once in the safety of the leafy canopy, she lets her young go for a little wander. She must need a rest after such an epic adventure.

It is hard to tell what disturbed her and inspired the risky and energy-demanding crossing in broad daylight, but judging by how wet her coat is we assume that she was in a hurry to get to a sunny spot to dry out and warm up.

What’s so special about sloths?

According to the Scientific American, sloths have the slowest metabolic rate of any animal on earth. Their diet of leaves and shoots is low in calories, and their digestion rate is the slowest among mammals. It can take a sloth up to a month to digest a meal. And since eating more is not the answer, sloths evolved to do less and to conserve as much energy as they can.

To accommodate their leisurely lifestyle, sloths developed a suite of extraordinary behavioral and physiological adaptations.

To begin with, they can regulate their body temperatures by about 5 degrees Celsius to match the temperature of their environment. So, instead of burning extra energy to keep themselves warm, sloths prefer to bask in the sun to warm up. This explains the speedy bridge crossing that we witnessed in Tirimbina.

Never moving far from their food supply, sloths spend most of their lives hanging upside-down in the forest canopy. They sleep, eat, mate, and give birth hanging upside down.

Over time their internal organs have shifted to accommodate the upside-down lifestyle. Even their hair is parted along the stomach and flows from belly to back to allow the rainwater to run off.

Sloths’ fur has special groves to house algae. Their sedentary lifestyle allows algae to grow, which gives their fur a greenish tint that helps them blend with their environment and avoid predators.

Apart from the algae, a sloth’s shaggy coat is home to an entire ecosystem of invertebrates, some of which are not found anywhere else. These peculiar friendships help sloths to appear quite unappetizing to the potential predators.

Unfortunately, no adaptations have prepared sloths for the ever-expanding human population and our impact on the environment. While not threatened with extinction, sloths fall victim to habitat loss across their range.

Lucky for sloths, Costa Rica values its biodiversity, with 25% of the country’s land set aside as protected areas to safeguard the wildlife from deforestation, logging, and poaching.

Costa Rica’s sloths and where to see them

The brown-throated sloth is active during the day and one of the best places to see it is Manuel Antonio National Park. You could either take your chances of spotting it on your own or join a guided walk that departs regularly from the ticketing office.

All the photos are the author’s. The videos are Ruth Lichter and Peter Mammoliti’s.