Sometimes, it takes going thousands of miles from home to help you better appreciate both your home and those who live there. In Morocco, the most unfamiliar of places, I came to treasure anew those who had become so familiar that I had ceased to see them.

My two sons — Connor (18) and Sumner (21) — and I arrived in Morocco after passing through Dubai and Egypt. In Egypt, Sumner had picked up a stomach bug. By our second evening in Morocco, however, he was feeling better. The return to health after the scariness of being sick on a trip made him jubilant and talkative. That evening, over a dinner of chicken tagine, I learned from my straight-laced older son what happens at heavy metal concerts and what it feels like to dance in the “circle of death,” subjects about which I’d been blissfully ignorant.

Two nights later, we rode camels into the Sahara and slept beneath an impossible number of stars. Before bed, over a meal prepared by our Berber guides, it was my younger son’s turn to open up. I gleaned no insights into his preferred music. But I did learn how my wife’s breast cancer two years earlier had affected him in ways that were as understandable, once revealed, as they were surprising. The location and our unique form of transportation there all led to a moment of vulnerability, trust, and revelation.

The next evening, after a long day driving, we found ourselves lost in the maze of Fez’s medina. The world’s largest continuously operated medieval market, the medina in Fez, is a warren of twisting alleyways filled with vendors of all kinds. I snaked my way through the throng, confident that Sumner and Connor were right behind me keeping up, which they were. But what I didn’t realize was that as the leader of our threesome, I was simply alerting the never-ending sea of overly-friendly merchants that foreign tourists were in their midst. While I slithered by, my boys were not so lucky. 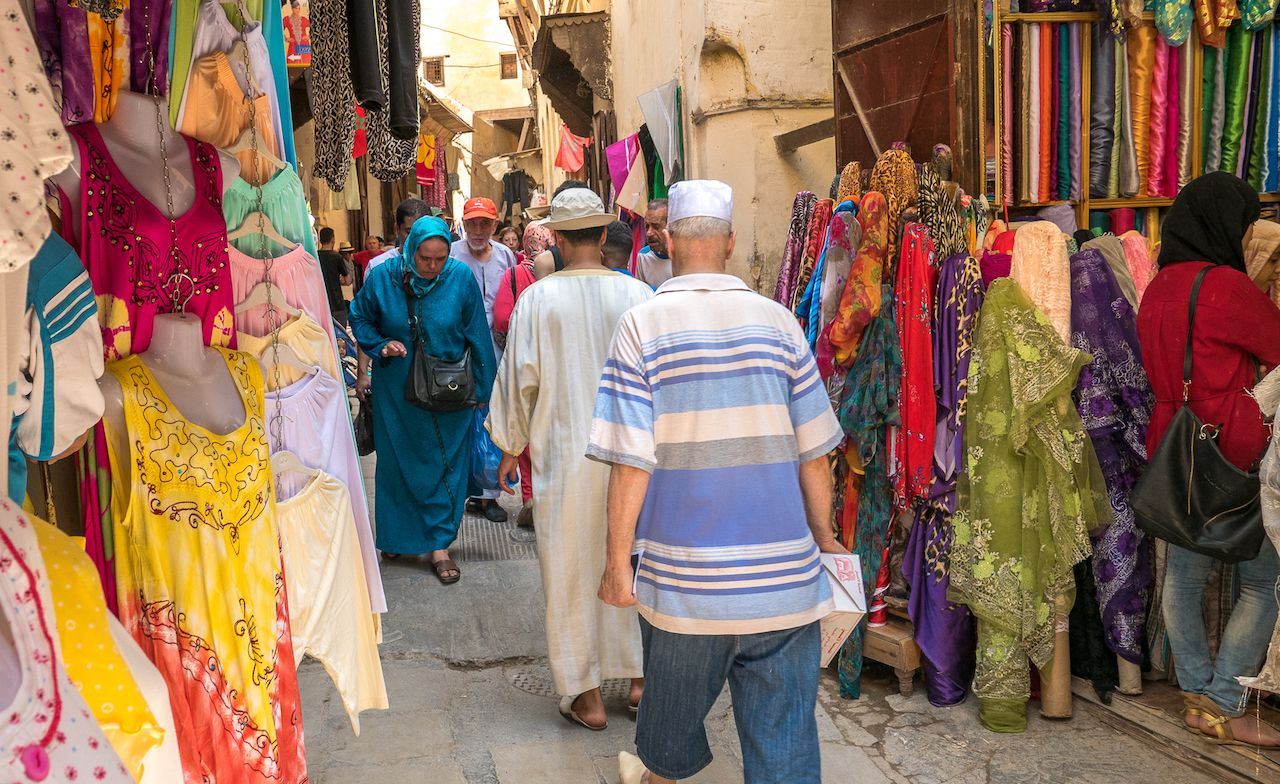 Sumner and Connor were routinely accosted by merchants asking them to buy something, or have tea, or visit a particular store. My sons handled it well, but it took a toll. When we finally reached the restaurant we were seeking, they informed me that a) I was not traveling alone, b) I had two others in tow with me who weren’t as comfortable in such places, c) I had no idea what they were going through in my wake and d) I needed to think of others rather than just myself. Ouch. What devastated me wasn’t so much their words or the fact that they were right. It was the fear and hurt I could see in their expressions and hear in their tone. My sons may have been old enough to be considered adults, but there, in the heart of Fez, I realized that in many ways, they were still boys. My boys. And I had let them down.

Along with my unfortunate behavior, I realized that everything at that moment looked bleak for another reason: we were all famished. Low blood sugar is our family’s kryptonite. Thus, after some roasted lamb and spiced vegetables, we quickly reestablished the rhythm of that trip, sharing, laughing, and being happy just to be there together. Even so, I was careful, from that point on, to be far more sensitive to their experience as we headed back into the medina after dinner.

The next morning, I had arranged for a guided tour of the artisans and craftspeople of Fez through a local group, Culture Vultures. Our guide, Sadiki Tahar, met us at our riad. He told us about how, when the Moors were kicked out of Spain in the 15th century, many of the talented artists responsible for works like Granada’s Alhambra Palace settled in Fez. The traditions of metalwork, plasterwork, leather tanning, candle making, textiles, and many other crafts continue there to this day.

Soon we were off exploring the same alleys we’d been through the evening before. But with a guide and daylight, everything seemed calmer. We witnessed leather being dyed in huge open-air vats and saw it processed and sewn into a variety of bags and garments. We observed a world-famous brocade-weaver work magic on his loom and watched a blacksmith create the tools used for carving elaborate calligraphic figures in plaster. We even took turns getting wrapped in traditional scarves worn as headwear. 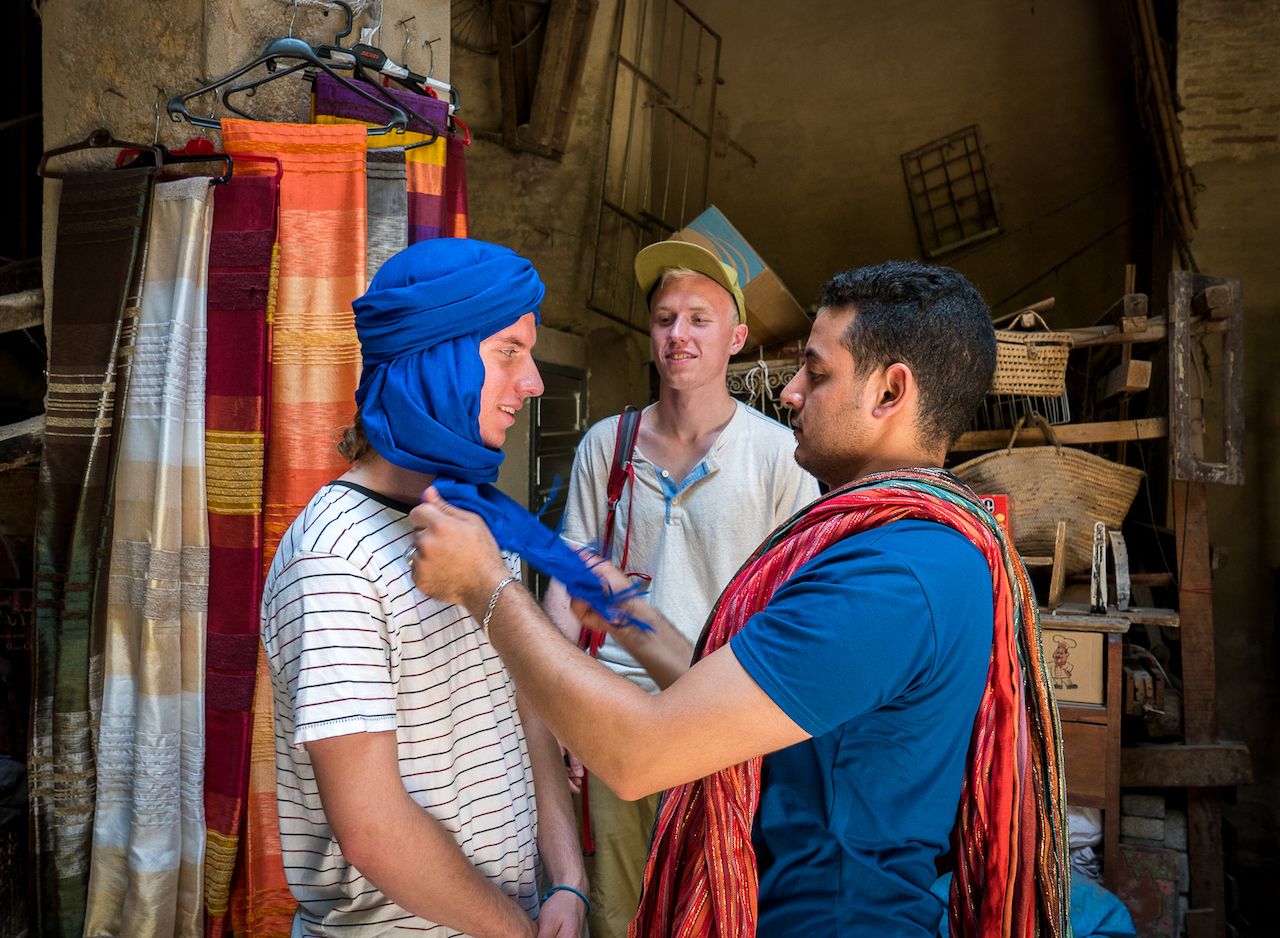 Without a guide, we never would have been able to converse with the craftspeople such as the man who created combs, spoons, and other articles from the horns of cattle, or the metalsmith who patiently coached me as I hammered away, attempting to smooth one of his brass bowls. Our guide also proved invaluable in locating a hat vendor so that Connor could purchase a genuine fez in Fez. 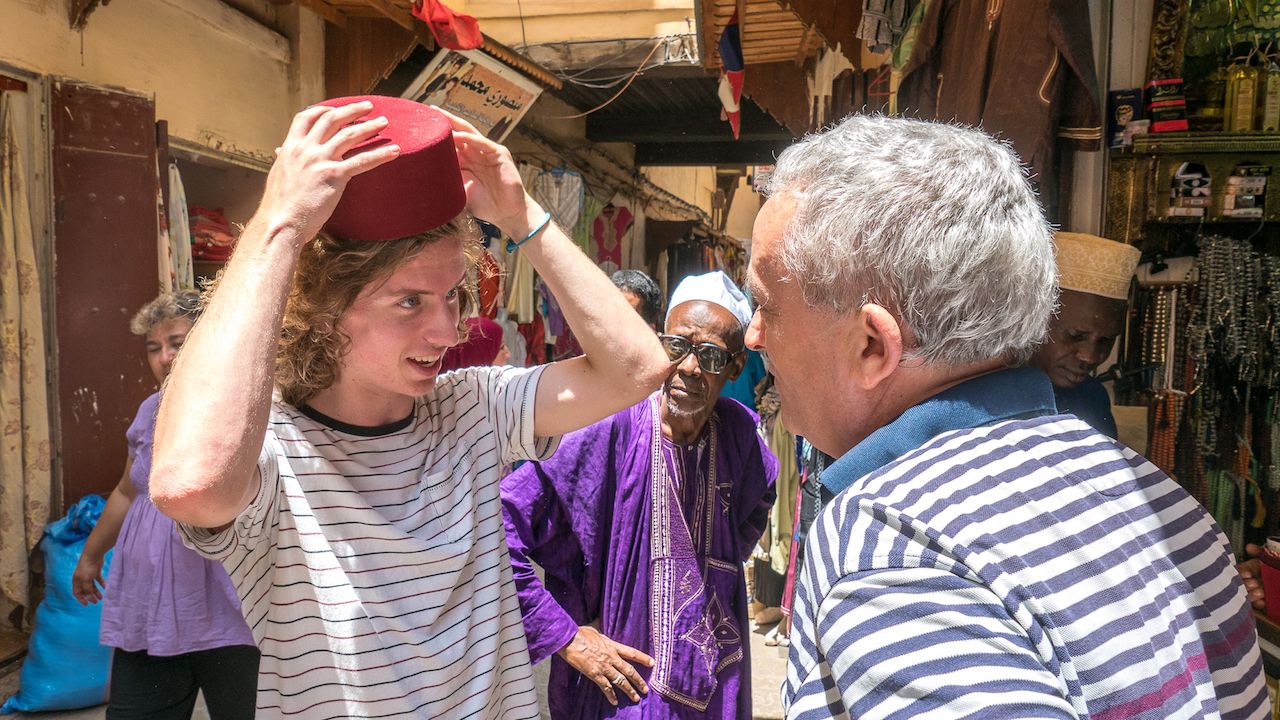 As the day wore on, so did the heat. We were in Fez during Ramadan, a time when Muslims fast during the day, even from water. Sadiki Tahar understood our plight and brought us three bottles of water. We took the bottles but tucked them into our bags. Later, we found an empty stairwell and consumed the water out of sight of others.
At the end of our time together, our guide led us down an alley that was dark, winding, and a bit intimidating. Eventually, we arrived at a nondescript door which he opened and ushered us in. Inside was a sumptuous riad. Beautiful tile and plasterwork lined the tall courtyard around us with an elaborate wooden balcony and brass chandelier high above. It now served as a restaurant, one of the few open during the day and invisible to the outside world. There, though he refused to eat himself, Sadiki Tahar helped us to order. He then told me something I will likely never forget.

He said that I must have a wonderful wife. I replied that I did, but I asked how he knew. He said it showed in the quality of our sons. Small gestures had made a great impression on our guide: being thoughtful enough not to drink our water in front of others; the enthusiasm the boys showed to the various artists; Sumner’s requests to have Sadiki Tahar (a former imam) demonstrate the melodious call to worship and to write in Sumner’s sketchbook a phrase in Arabic calligraphy; or Connor’s gratitude for assistance buying his fez.

Our guide’s comments made me realize that I was traveling not just with children that I loved, but with young men I respected and admired. 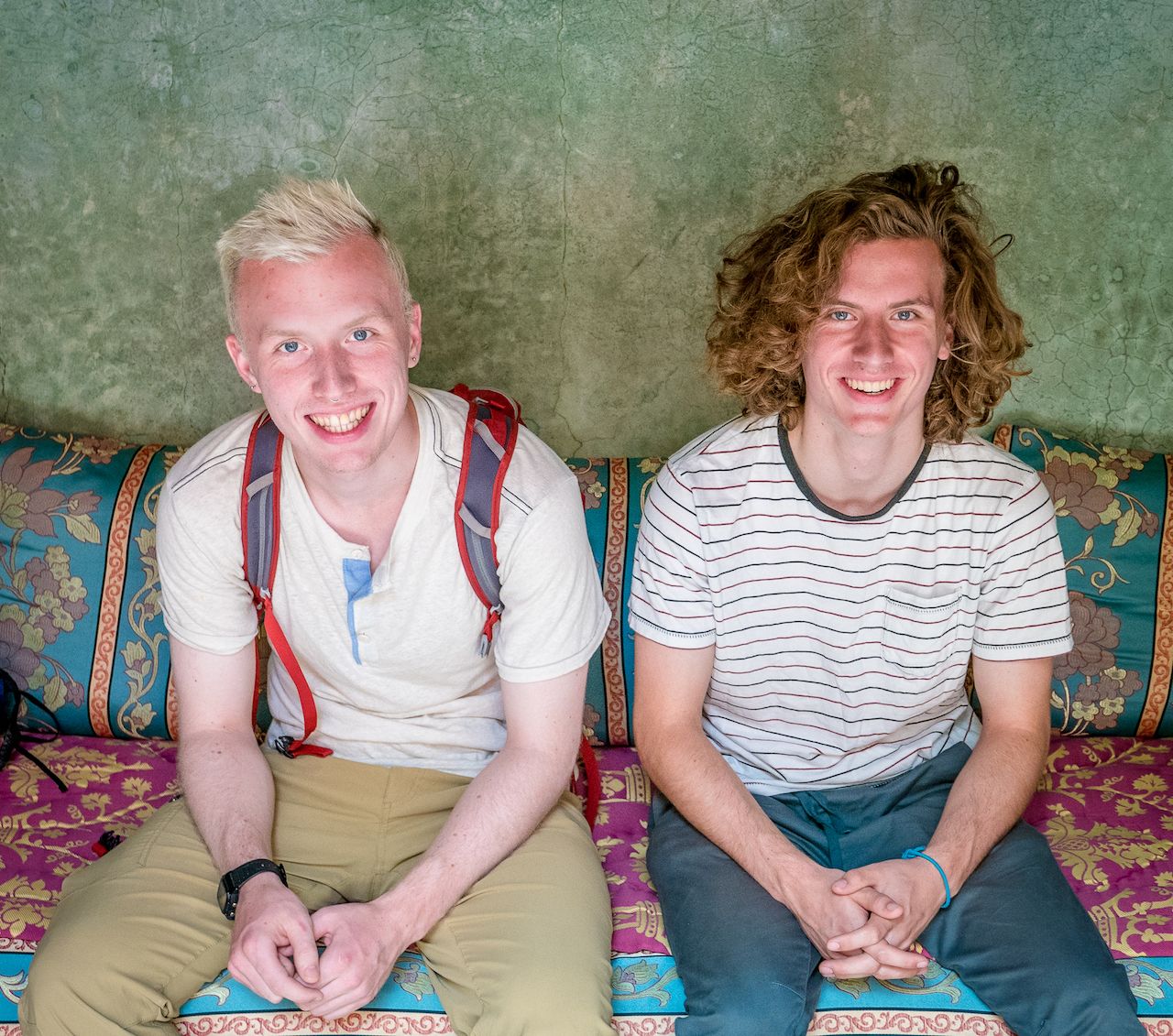 Being someplace so exotic and different opened us up to new possibilities for intimacy, sharing, and connection. But Sadiki Tahar’s kind words helped me to appreciate my sons in a new way. Maybe you don’t have to travel halfway around the world to value what you have right in front of you. But I’m so grateful that we did.

Two Weeks Traveling With Mom
Tagged
Family Travel Female Travel
What did you think of this story?
Meh
Good
Awesome