Since the start of the coronavirus crisis, Sweden surprised the world by taking a very different approach to the viral threat than its neighbors and, in fact, than most of the rest of the world.

Rather than forcing businesses like shops to close, the government has asked citizens to stay home where possible and to avoid visiting nursing homes. Gatherings of up to 50 people are permitted, bars and restaurants are in business, and public schools under the high-school level are open. That means every weekday kids up to 15-years-old are joining their classmates and learning from teachers, in person.

The Swedish approach was pioneered by the country’s chief epidemiologist Anders Tegnell, who said the country could withstand letting the virus move through the larger population while protecting its most vulnerable citizens.

While the approach seems to have broad acceptance inside the country, it also has its local critics. In an open letter to one of the country’s major newspapers two weeks ago, 22 researchers said the country’s approach was far too lenient.

Another Swedish newspaper ran a letter signed by 913 educators that asked the country’s ministries of education, health, and social policy to “better protect staff and students.” The teachers criticized authorities for refusing to compromise, despite confronting a pandemic unlike anything seen in the modern era. “School duty and schedule are still seen as… more important than life and health for those staying on school premises,” said the letter.

Despite the critiques, polls show most Swedes are in favor of the approach. “Support for the government has gone up,” said Lars Trägårdh, a historian and professor at Stockholm’s Ersta Sköndal Bräcke University, who co-authored a piece in The Guardian that opined that trust in government is a critical piece of the Swedish approach.

He likened the support to what is being seen in other countries where citizens are rallying around their nation’s approach, whatever it may be. “So there’s a lot of support here that is unrelated to any sort of objective medical facts,” he added.

Trägårdh, moreover, cautioned against overstating the degree of openness in Sweden. While images of outdoor bars in Stockholm filled with people may be what those of us outside of its closed borders are seeing, the reality is more nuanced.

“We are actively engaged in social distancing,” said Trägårdh, who has been teaching his classes via Zoom from an empty office space and whose wife is working from home. He is weary of efforts to portray the Swedish approach as completely different from that of its neighbors, referring to the “empty categories of lockdown versus lax.” 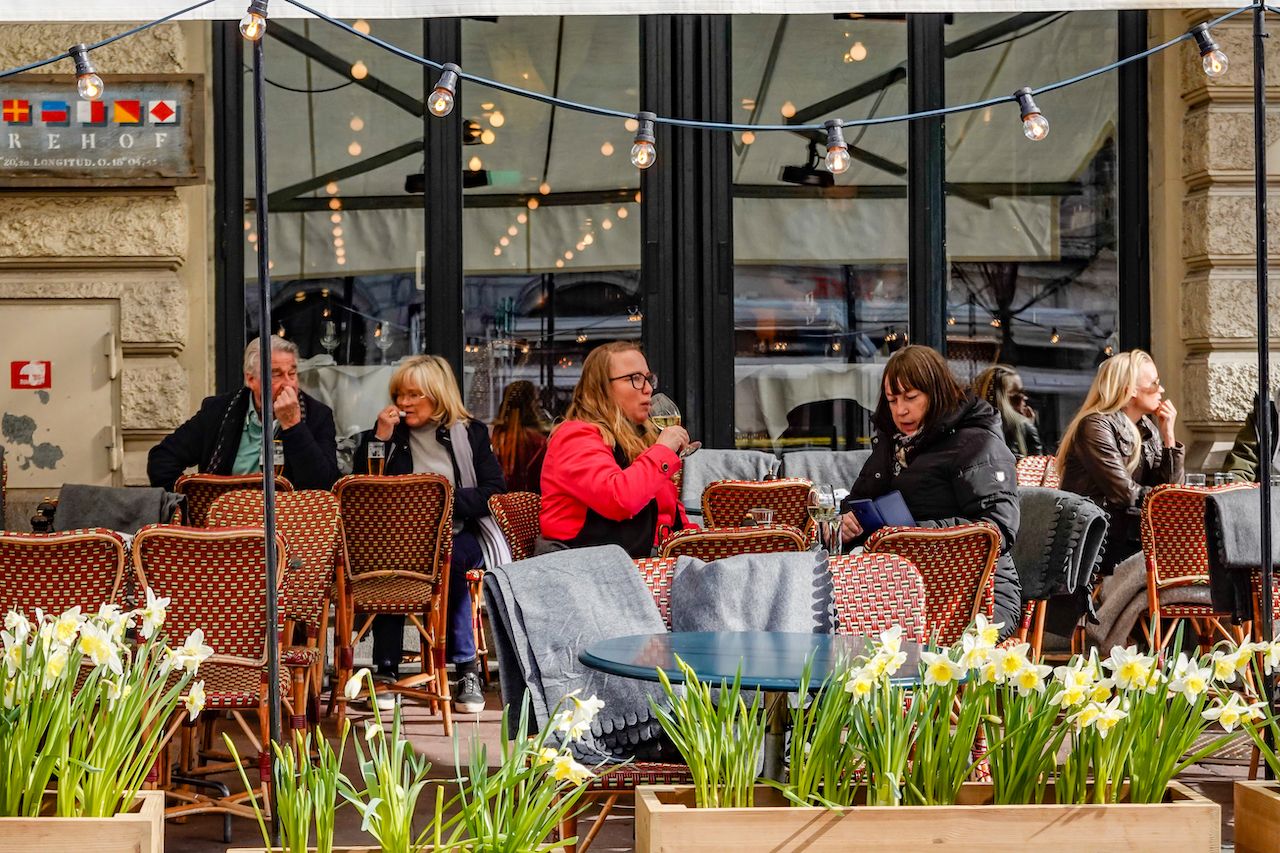 Stockholm, Sweden, March 31, 2020: Despite lockdowns in other countries, Swedes are going about their normal business though the streets are noticeably emptier than usual. Photo: Alexanderstock23/Shutterstock

Like the rest of the world, life is anything but normal in Sweden these days. Although restaurants and bars are open, they can be shut down if they don’t properly enforce strict social-distancing rules. And public buses and trains are carrying few passengers.

“Everybody is keeping a distance. We haven’t seen our friends since this started,” says Annemari Koivula, a physician and mother in Stockholm. Her husband and two older boys have been living outside the city in the family’s rustic weekend cottage, working and attending school online. As a physician going into her clinic, Koivula has stayed in Stockholm with their youngest son, who has been attending school.

Koivula said she also appreciates that those forming the policies are physicians and not politicians. “It’s a lot of doctors who are on the front line and providing their guidance,” she said.

Trägårdh and Koivula are glad they can send their children to school, but they recognize their attitude isn’t necessarily held outside of Sweden. Koivula and her husband would like to visit their families in their native Finland next summer, but Koivula wonders whether or not Finland, which has much stricter social-distancing measures, will allow it. “We’re not very popular,” she muses about others’ current view of Sweden.

Even within Sweden, dissatisfaction with the country’s approach is more vocal among non-Swedes. “Particularly in the expat community, you have people who are more critical than regular Swedes,” said Trägårdh. “There’s a fair amount who are upset, who think that Sweden should be closing its schools and following a more strict policy.”

However, Lola Akinmade Åkerström, author of the bestselling LAGOM: Swedish Secret of Living Well, which delves into the Swedish mindset, said the idea that native-born Swedes are more trusting of the current system is a “false narrative.”

“Swedes are also critical of the more laidback approach as they see the reported statistics as well,” said Åkerström via email. The difference, she said, is that, “Swedes just aren’t comfortable voicing dissent publicly due to inherent conflict avoidance and tend to do it privately.”

The statistics Åkerström refers to show Sweden’s comparatively high infection rate. On Friday, the Public Health Agency acknowledged a rise in cases after recent suggestions that they would soon plateau. Sweden, a country of 10 million, has seen 2,274 deaths from coronavirus. Its neighbors Finland and Norway, whose populations measure 5.5 and 5.4 million, have seen 190 and 201 deaths from the virus, respectively — meaning Sweden has experienced five times the number of deaths per capita.

Matador reached out to Sweden’s Public Health Agency for comment but was directed to an interview with Tegnell published in last week’s Nature. There, Tegnell, the epidemiologist who’s been leading the country’s approach, said, “As a society, we are more into nudging: continuously reminding people to use measures, improving measures where we see day by day that they need to be adjusted. We do not need to close down everything completely because it would be counterproductive.”

The latest nudging came on Wednesday when the country’s prime minister explicitly reminded healthy people to maintain a social distance — but did not specify what that distance should be. A look at the guidelines for bars asked patrons to maintain an “arms length” separation between them.

In the Nature interview, Tegnell acknowledged that the country had not done well by its seniors. The virus has torn through nursing homes, and to date, 87 percent of Sweden’s COVID-related deaths have been in people aged 70 and older. “We underestimated the issues at care homes, and how the measures would be applied. We should have controlled this more thoroughly,” Tegnell said.

Trägårdh also believes Sweden could have done more for its oldest residents. “We’re not respecting or taking care of the elderly the way we have kids,” said Trägårdh.

But he feels the approach has been especially good for children. “Me and my wife are thankful every day” that their two 12-year-old boys are attending classes, he said.

Koivula feels the same way, noting that “Kids need socialization. They need to be active.” In a Nordic culture where spending time outside is considered essential for children, it’s no surprise they have this view.

And it appears to be part of what informed the government’s decision to keep schools open. “In Sweden, children’s rights are very big. You think about what is the cost inflicted on kids that are deprived of school,” noted Trägårdh

Yet nearby countries with similar views towards equality and spending time outside, like Finland, have nonetheless opted for much stricter controls — putting death counts ahead of considerations like the need to attend school, mental health, and long-term sustainability.

“If your primary concern is death count,” particularly if a vaccine is found sooner than anticipated, Trägårdh said it would be fair to call Sweden’s approach “terrible.” But in the absence of a vaccine in the near term, he says “you can’t keep people in lockdown forever.”

Trägårdh feels that a lot of the attention on Sweden may be because its approach “appears a little bit as a challenge or like a threat to other countries,” he said. It could be seen as others asking, “‘If we all have to suffer being locked up here, why should the Swedes be able to go out and sit in outdoor cafes?’”

Trägårdh concedes that Sweden can sometimes appear “smug” but said, “Every country has to find its one way. Every country is conducting an experiment.” As to closing schools, he echoed the Public Health Authority when he said it was too late for that anyway: “That train has left the station.”

“I think everybody should just calm down a little bit and do what they want to do in their countries and not worry so much about what Sweden is doing in Sweden. We aren’t exporting this model to anybody else,” he said.

And he puts his own perspective on the issue: “In daily life, everyone here is as sick and tired as everyone else, and everybody is sad about old people being sick and people dying and the general destruction of social life. Nobody likes that, and I think many people here are quite happy about the freedoms we do have remaining.”

NewsPrincess Sofia of Sweden Will Assist Medical Workers During the Pandemic
Tagged
COVID-19 Lifestyle Wellness
What did you think of this story?
Meh
Good
Awesome