Compared to its sister isles, Tahiti gets no respect. But there are plenty of reasons to give the main island a closer look.

With neither a grass skirt nor a fragrant frangipani lei to welcome them, most foreigners arrive in French Polynesia via Papeete to find a bland international airport. Sure, there may be a desultory ukulele trio in some far corner of the terminal, but it’s still an unfortunate introduction to the French dependency. Papeete is greatly lacking in tropical charm, despite the fact that it’s a capital city in the South Pacific. That’s why most travelers tend to spend just one night there, usually as a convenience on arrival or the night before departure, rarely going beyond the urban center.

But for those with a sense of adventure and the keys to a rental car (easily booked in advance at the airport or in town), the main island of Tahiti has plenty of alluring sights. And most of them can be seen in a single afternoon.

A traditional Tahitian table for a get-started lunch

No one would be surprised to learn that Tahiti is famed for its seafood and its unpretentious preparation of the ocean’s bounty. And if a meal like that can be enjoyed within a coconut’s throw of the surf, all the better.

The Tahiti Pearl Beach Resort is just 15 minutes from downtown Papeete on a clockwise drive around the island, but it feels like another planet. The resort is Tahitian to the core with its massive, palm-thatch-roofed, open-walled restaurant; lush gardens; vast swimming pool; and waves crashing on the beach. In fact, it would be out of place almost anywhere else.

The poisson cru a la tahitienne — a traditional raw fish salad with juicy chunks of tuna in a bracing sauce of onion, tomato, cucumber, lime juice, and coconut milk — sounds ideal when I read the menu, and proves to be when served. The setting is idyllic: booming waves washing up onto a volcanic black sand beach, soft Polynesian music floating down from hidden speakers, and the mountainous silhouette of Moorea (where another local food adventure awaits) rising just across the channel.

Casting a somewhat macabre tone to the otherwise ethereal setting are the overgrown ruins of what was once the Hyatt Regency Tahiti resort atop a nearby hill. Shuttered for more than two decades, the resort’s abandonment is still a source of dispute among the locals. (Was it a tax lien? Partner dispute? Something more sinister?) The creaky remnants of the resort loom over the bay, awaiting a Polynesian version of Stephen King to give them life again, if only in literary form.

Captain Cook and the Transit of Venus 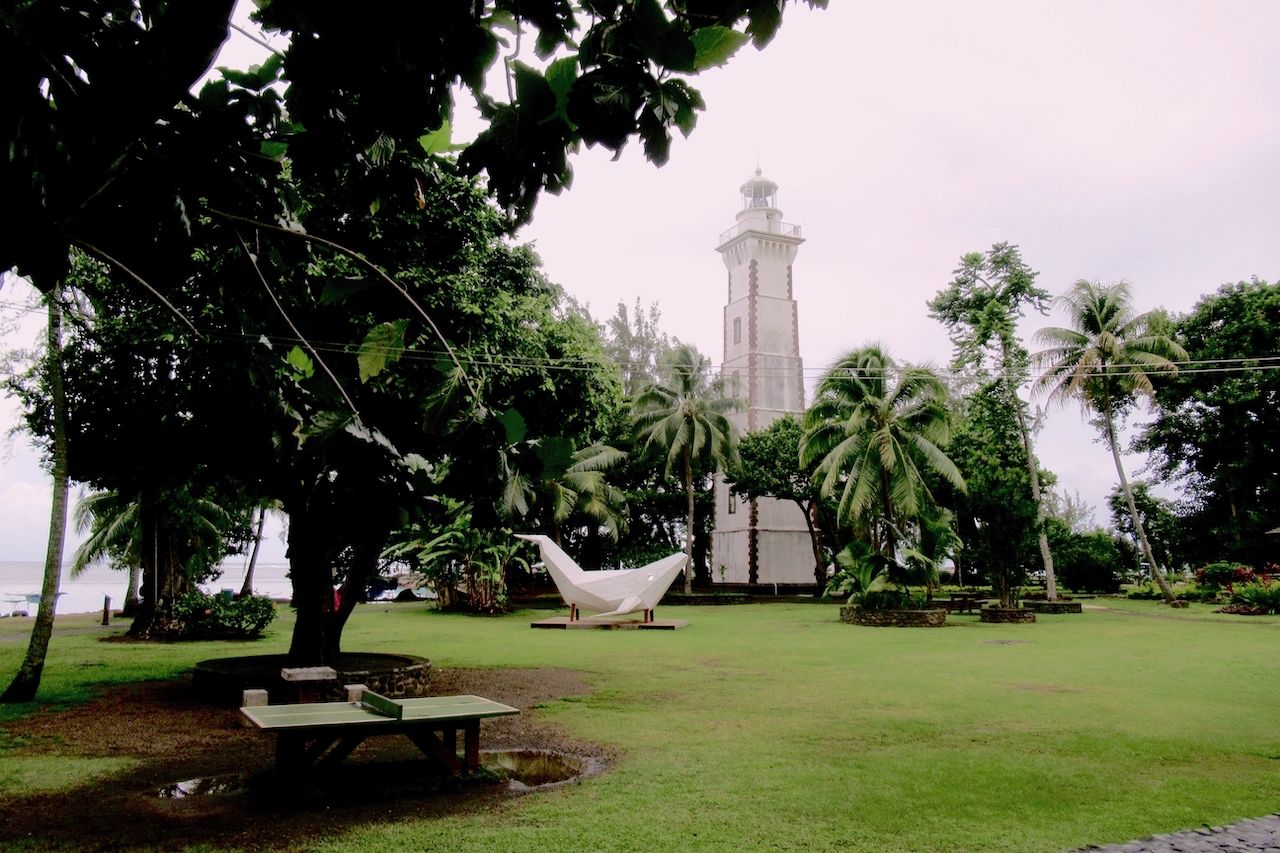 Not far from Tahiti Pearl Beach Resort is a popular park brimming with people, palms, and portraits of the past. At its heart is a 100-foot-tall lighthouse constructed in 1867 by the father of author Robert Louis Stevenson. Some 20 years later, Stevenson, who had served as his father’s aide, returned to Tahiti and recalled his pride in the family accomplishment: “Great were the feelings of emotion as I stood with mother by my side and we looked upon the edifice designed by my father when I was 16 and worked in his office the summer of 1866.”

There is an excellent anchorage just off the peninsula where Captain James Cook moored his ship, the HMS Endeavour, to monitor the 1769 Transit of Venus, thus giving the spit of land its name, Point Venus. Another famous ship that found safe harbor here, in 1788, was the HMS Bounty, just before the mutiny led by Fletcher Christian. The Bounty dropped anchor offshore to collect breadfruit saplings for transfer to the Caribbean, where it was hoped they would provide low-cost sustenance for the slave population. Tahiti’s first Christian missionaries arrived here in 1797. Point Venus, it turns out, was a veritable Grand Central Terminal of the 18th-century maritime world.

Today, the park is a charming spot for a stroll, to watch dogs play in the surf, and to have a close-up look at some of the traditional and racing outrigger canoes stored on the beach. There’s also a very good crafts shop with Tahitian textiles and rosewood carvings. 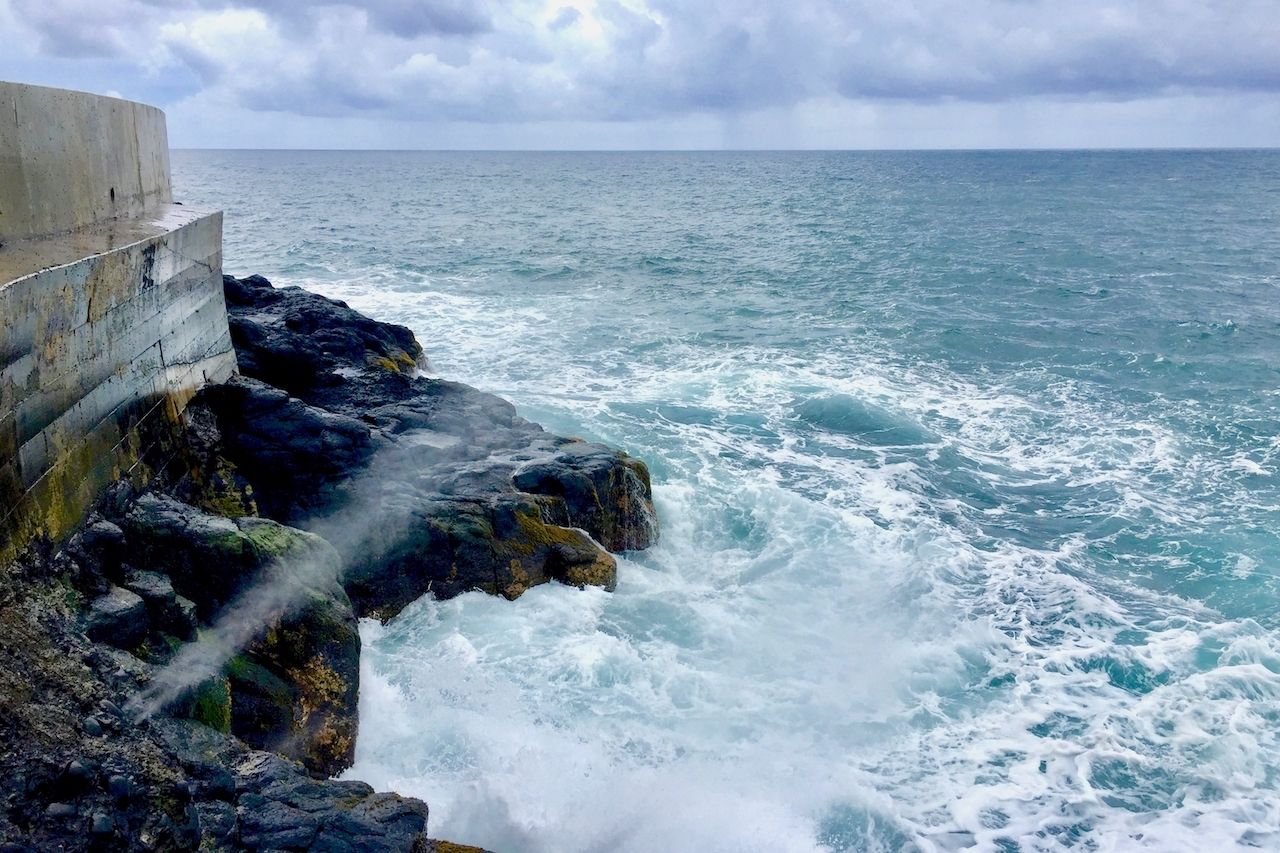 Continuing our circumnavigation in a clockwise direction, we arrive at a curiosity called the Arahoho Blowhole, where waves pouring into ancient lava tubes force air and moisture up and out the tubes’ perforated ceiling like whale spouts. One of the blowholes erupts every minute or so with a loud whoosh followed by a plume of what looks like steam. A separate but connected blowhole shoots its seaspray horizontally, like cannon fire, as waves wash hundreds of tadpole-like gobies onto the rocks. The gobies are little fish that use their pectoral fins like legs to move across the rocks. They can remain on the surface for several minutes thanks to cutaneous respiration — meaning they breathe through their skin. Finally, exhausted and running out of oxygen, the gobies drop back into the churning foam below.

Young couples stare at the blowhole spray in amusement, then walk along the coastal path, lined with Polynesian rosewood and Island walnut. Visitors observe the surfers below, shouting approval when one catches a wave and moaning disappointment when a good wave is missed. Across a narrow bay, waves rush up onto a shelf of volcanic rocks, and the white foam trickles back down the rocky shore like scores of small, lazy rivers emptying inexorably into the sea. The entire scene is, in a word, mesmerizing. 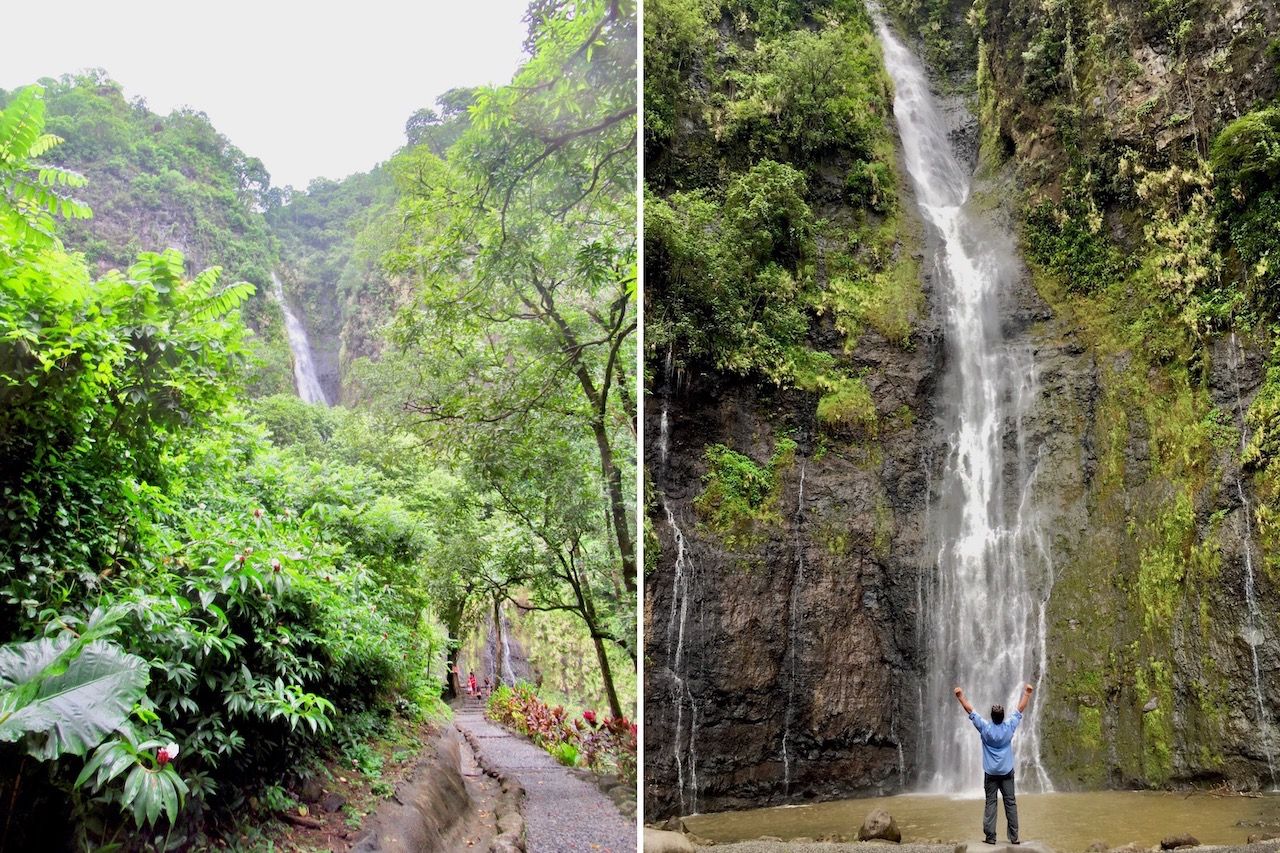 Faarumai Valley cuts deep into the coastal mountains but is so narrow in spots it barely contains a two-lane blacktop and a few modest houses on either side. During a hike, my group followed the mile-long road into the green canyon spilling over with aromatic ferns, bamboo, and the Tahitian chestnut called mape (pronounced MAH-pay), whose nut is a popular boiled snack. The road ends in a parking lot where we catch a glimpse of the uppermost reaches of 300-foot-tall Vaimahuta Falls. At some points along its rushing spill, the falls tumble straight and furious; at others, the water fans out in the wind, appearing like a white veil.

We cross a footbridge to a gravel trail that slopes gently uphill for a hundred yards to the base of Vaimahuta. A large catch basin is continually replenished by the falling water, which then flows into a peaceful stream. But look up! The view to the top of the waterfall is steep enough to cause some people to lose their balance and make everyone else desperate to fit the entire waterfall into the screen of their iPhone as they take a picture.

Two other falls — Haamarere Iti and Haamarere Rahi — can be reached by a trail that goes even deeper into the canyon, but the path was closed for repairs in early 2020.

The old way of life in “Little” Tahiti

“Whenever I come to Tahiti Iti, it reminds me that life doesn’t change here,” says Marania Teuru, a local woman who is guiding me around. “It’s still like it was when I was a girl.”

Women in sarongs and bathing suit tops chat easily on front porches. I see two elderly men and one woman in plastic chairs at the edge of the coastal road, intently watching the light traffic pass by. Women here still place a hibiscus flower behind their ears. Dirt roads run inland into dark valleys. The houses are tidy, with neat lawns and bright flower beds. Coconut palms, bamboo, banana plants, and blooms of every color fill the yards. Husbands and wives sit beside their homemade fruit stands at the edge of their driveways to sell the produce from backyard gardens. 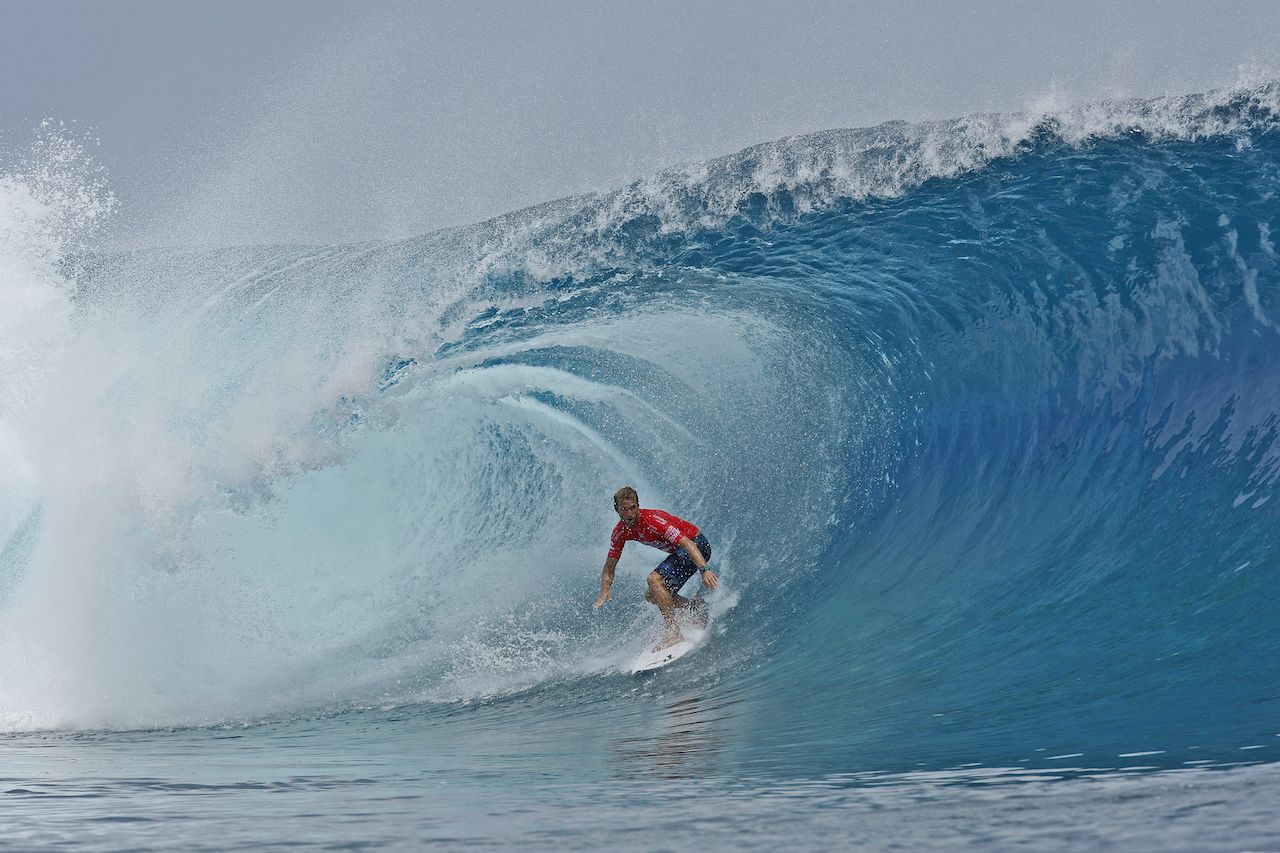 The coast road comes to an end at Teahupoo, a famous surf site and future host to the 2024 Summer Olympics surfing competition. The beach is small, and one wonders where the crowds will sit and watch. There are few places to eat nearby, just some rudimentary cafés known as snacks on the island. A few homely guesthouses accept a handful of visitors, but there’s nothing here on an Olympic scale. Except, that is, for the giant rollers out beyond the reef and nearly out of view of the beach. The giant waves come in so fast that often the only way any surfer can catch one is to be towed by a jet ski, then maneuver on his own once he is locked in the curl.

The grottoes of Maraa 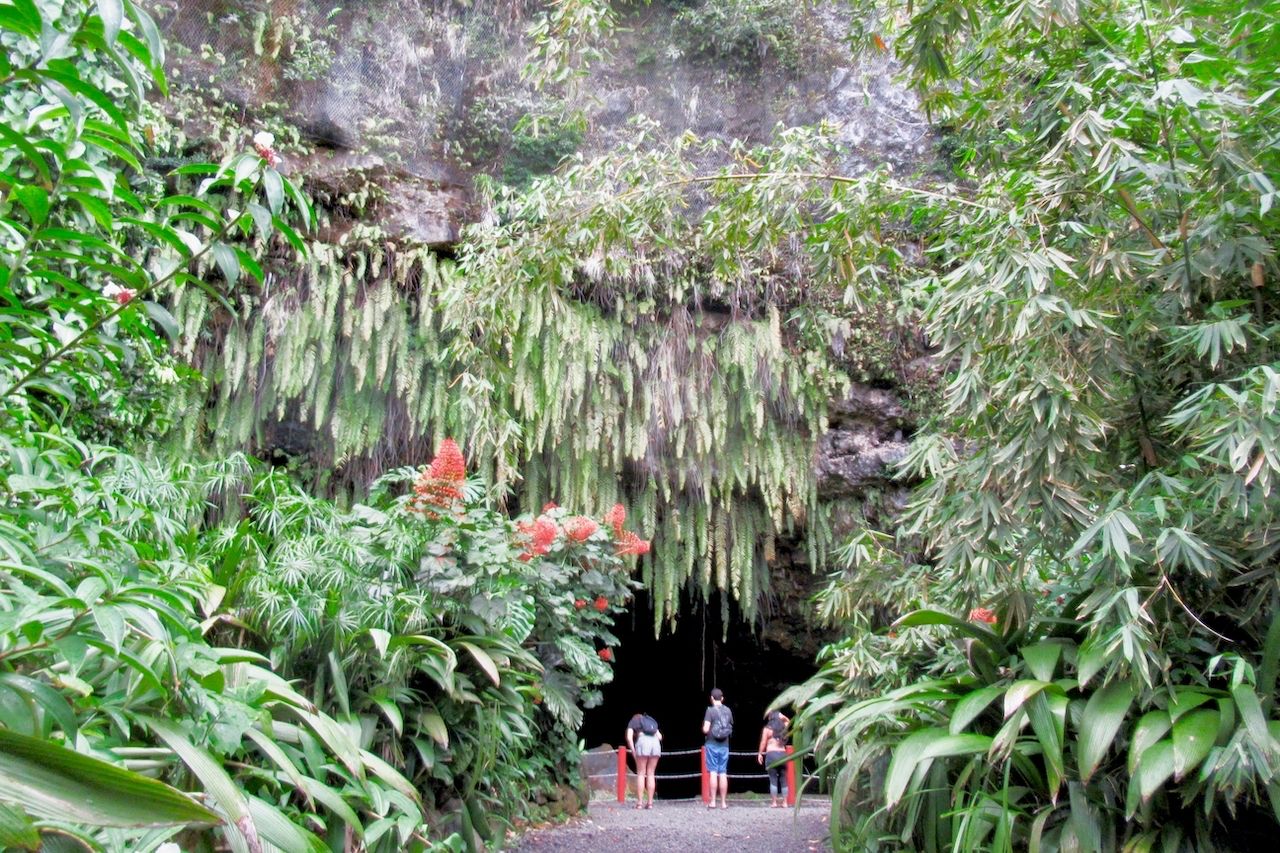 My last stop before returning to Papeete is the grottoes of Maraa, a series of water-filled caverns lying at the base of sheer basalt cliffs. The first cave is enormous. Although it isn’t raining while I’m there, huge water drops plop down from the cave ceiling. Forests of ferns hang upside down from cliff faces. A footpath near the highway leads to more grottoes, cascades, waterfalls, ferns, palms, bamboo, and shrieking birds.