Any traveler privileged enough to visit the vibrant island nation of Taiwan always walks away talking about one thing: the street food. When a traveler and a Taiwanese local start talking, it’s pretty much a guarantee that food will be brought up by either party within the first conversation. Taiwanese love their street food. It’s an art, it’s their passion, it’s their culture.

You can try everything from Chinese cuisine with Japanese influences to truly wacky Western fusions to unique Taiwanese foods that can only be found here. We focus on the small, family-owned food stands in Taipei that keep me coming back year after year. When friends and family visit, or just when the craving becomes too much to resist, I make my way to these places to satisfy the hungry beast within. 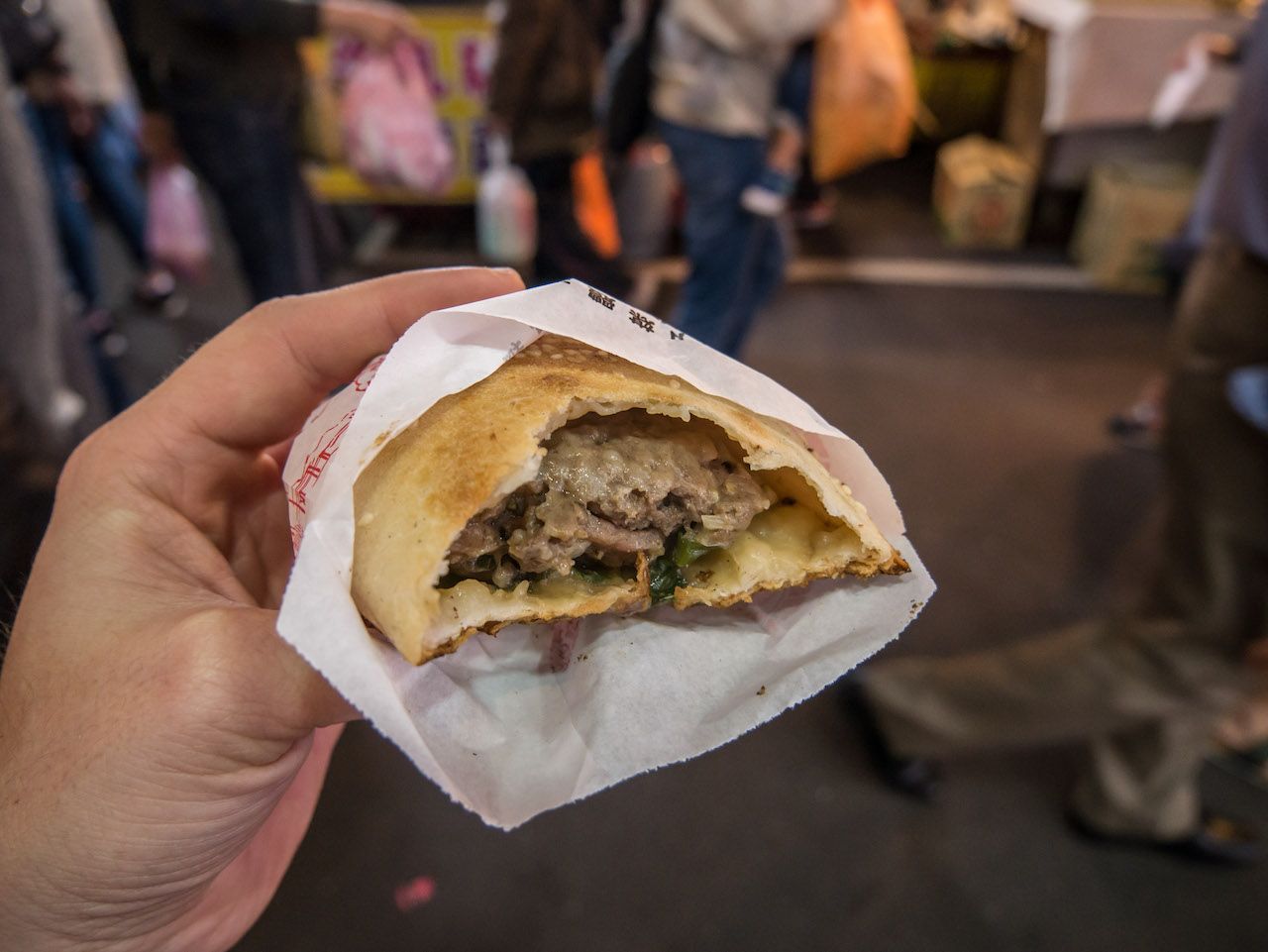 Located at the far end of the RaoHe Night Market, near the Songshan MRT station, is Fuzhou Ancestor Pepper Cake. Here, cooks hand make and bake a pork pepper cake or, in Mandarin, a hújiāo bǐng. If you enter from this end of the market then it’s the first stand you’ll see in the center aisle. 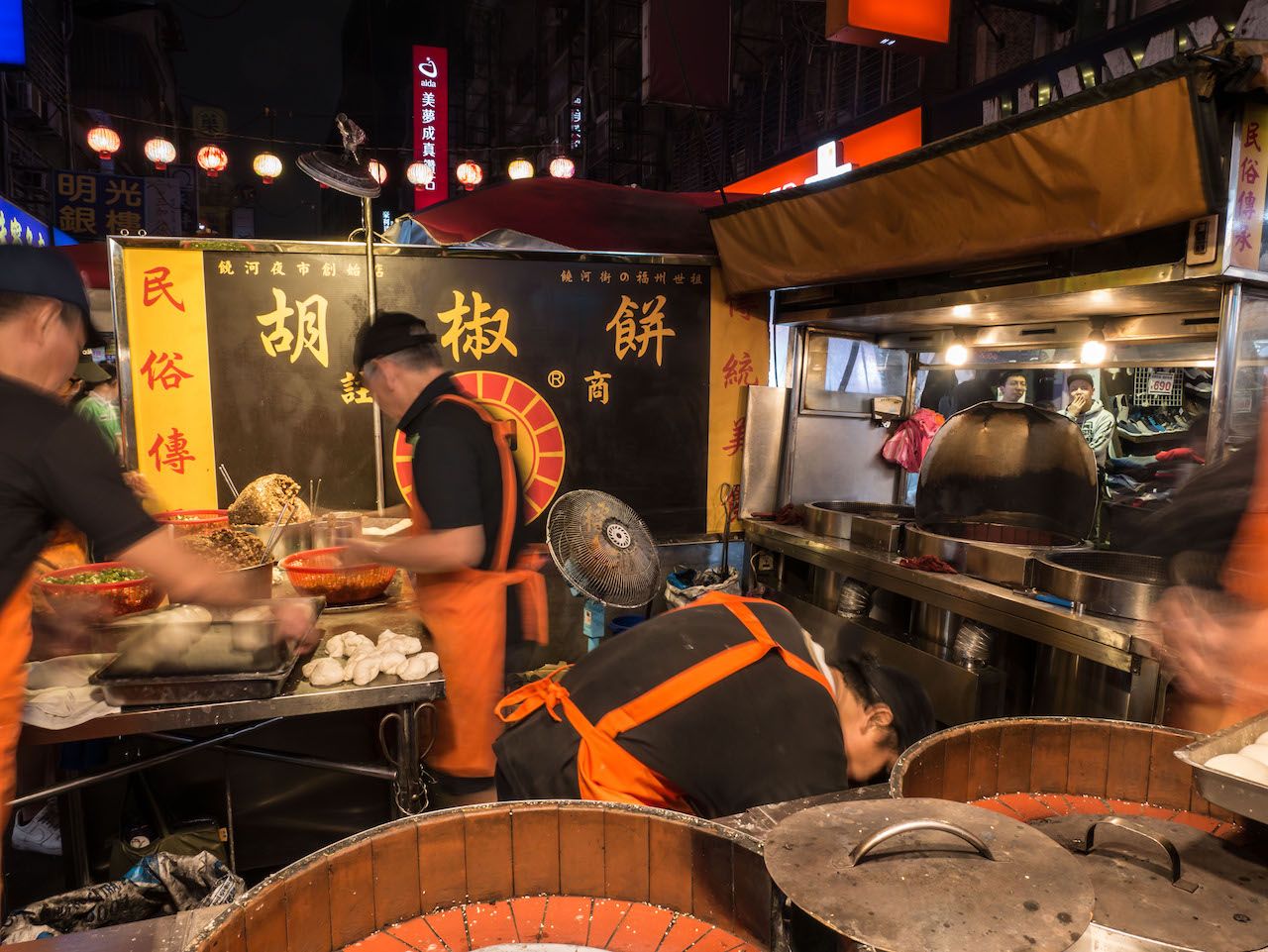 Black-pepper-seasoned ground pork is folded in with diced scallions and wrapped in a doughy blanket. It’s then hit with sesame seeds on top and slapped onto the walls inside of a top-loading brick kiln. In a matter of minutes, the crust turns a variety of hues, and the juices from the pork heat up to mouth-scalding temperatures. For only $1.50, this pick-up-and-go goodness can’t be beat. Take it in a small paper bag and go on your merry way to your next destination. Just keep in mind that it’s hot, so you need to bite carefully; otherwise, you won’t be tasting anything else the rest of the night. 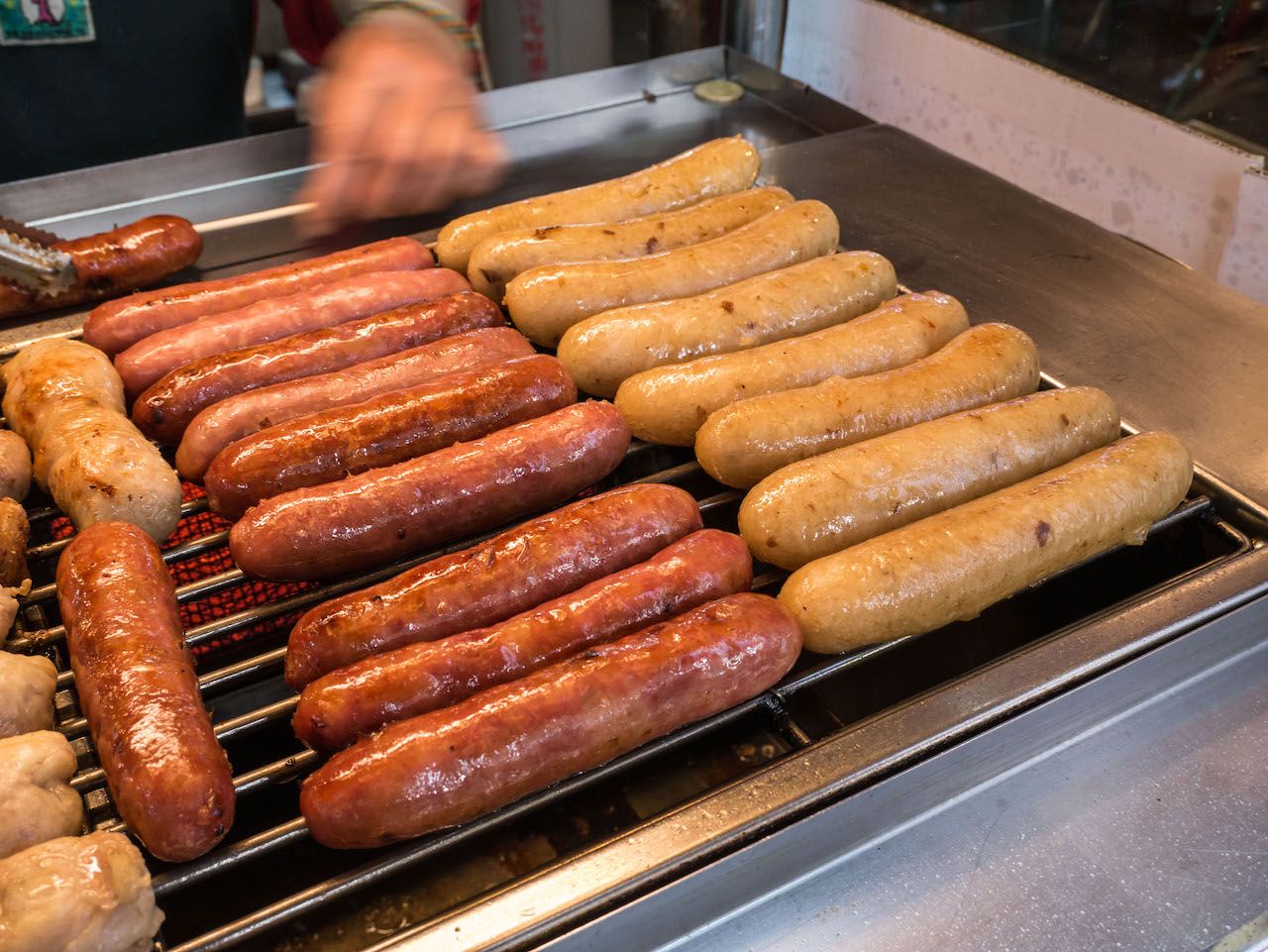 While you’re in the RoaHe Night Market for your ancestral pepper cake, you should also be sure to check out the “big sausage wrap small sausage,” or dàcháng bāo xiǎocháng in Mandarin. There’s only one stall that sells it, and it’s located about 300 feet from the west gate entrance on the left side of the right aisle. It’s easy enough to find and well worth the search. 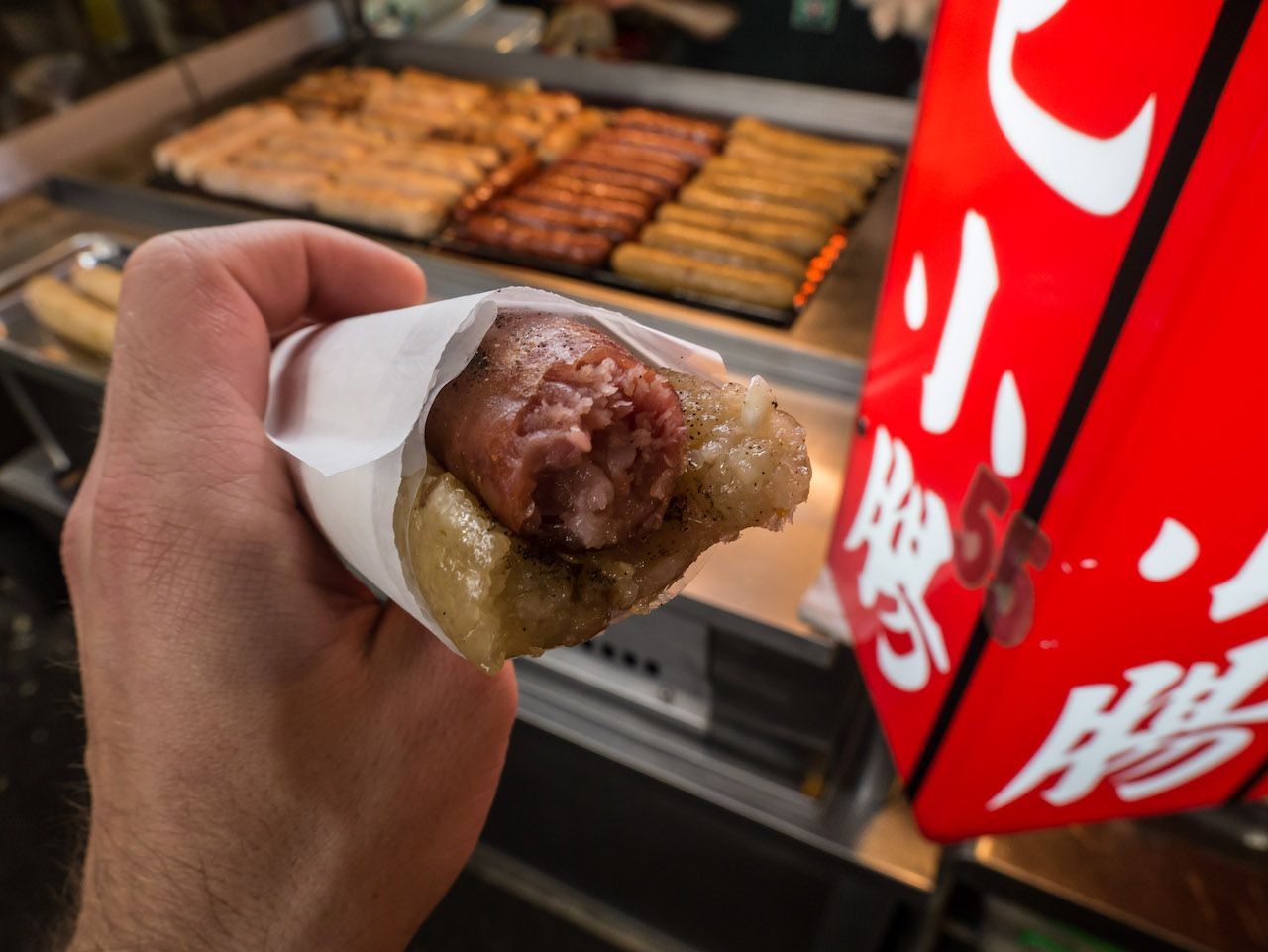 Taiwanese sausage is a staple street food. It’s served on small carts all over the city, grilled over hot coals, and served on a stick. Here, though, you get it inside a gelatinous rice sausage (rice packed into a casing exactly like meat sausage) with diced garlic, curry, cumin, seaweed, soy sauce, black pepper, pickled bok choy, or any variation of flavors she’s got available. Think of a hot dog but with more character. This food is also served in a small paper bag. Just continue twisting the bottom of the bag to keep the deliciousness coming. 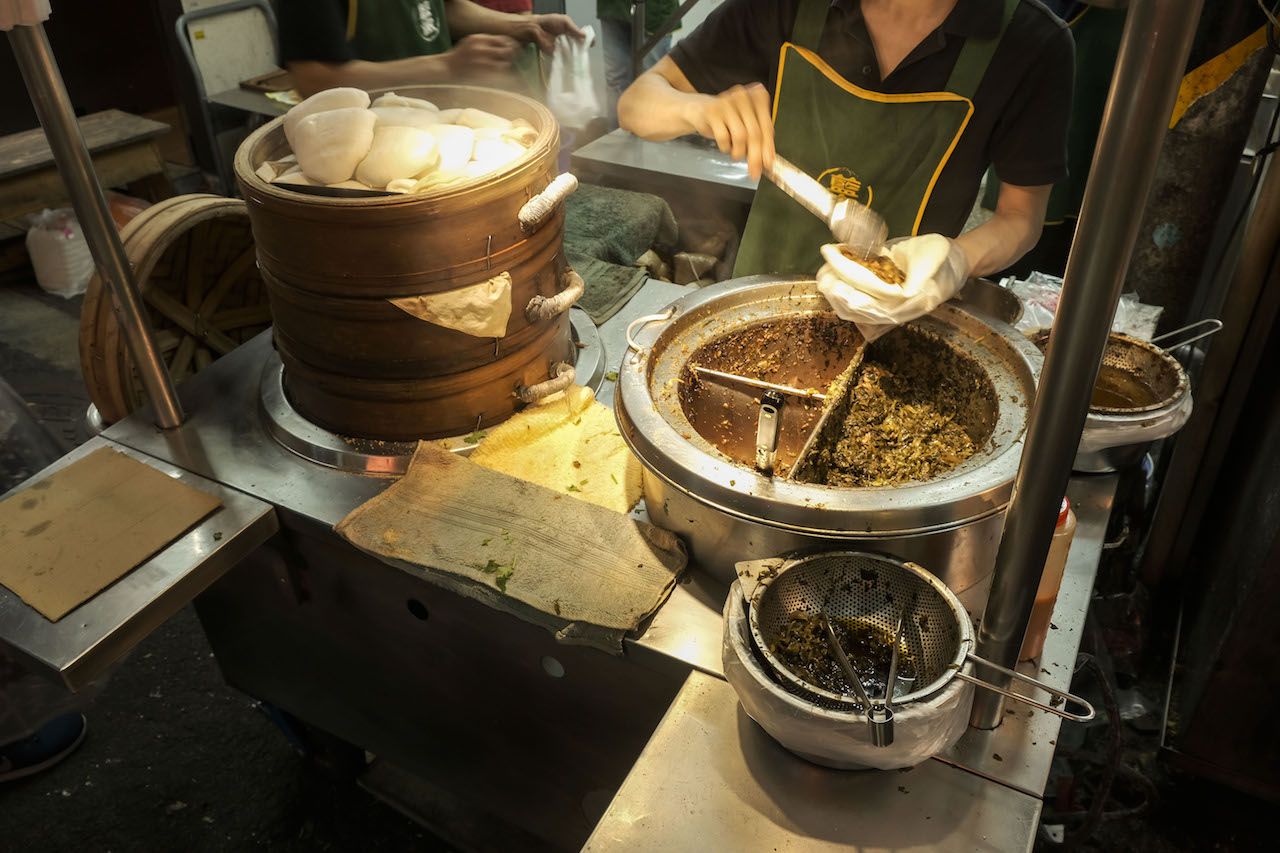 I’m a sucker for a good Chinese baozi, or bun, and this one is one of the best. Alternatively called the guà bāo, this food is also known as the Taiwanese hamburger. There are lots of places to get a pork belly bun in Taipei, but none of them is as good as they are at Lan Jia Traditional. Located in the Gongguan Night Market, and a five-minute walk outside of the Gongguan MRT station exit four, this food stand practically causes street closures. 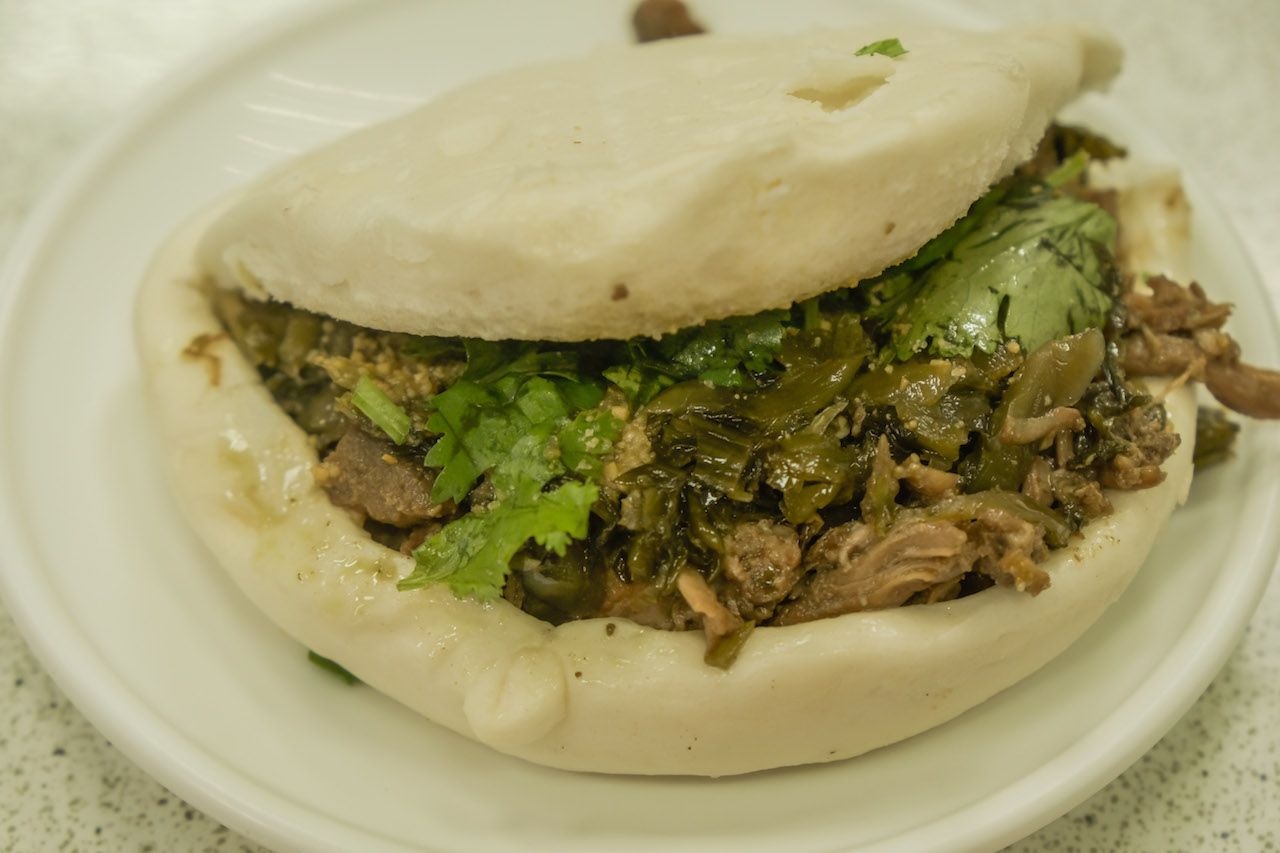 You can order it standing up at the food stand or take it sitting down inside a small eatery. Keep it in the little bag it’s served in because it gets messy. Pork belly buns use pork meat and pork fat that’s braised until it practically melts in your mouth. It’s sandwiched inside of an ever-so-sweet and soft steamed bread bun with pickled mustard greens, sweet peanut dust, and cilantro. 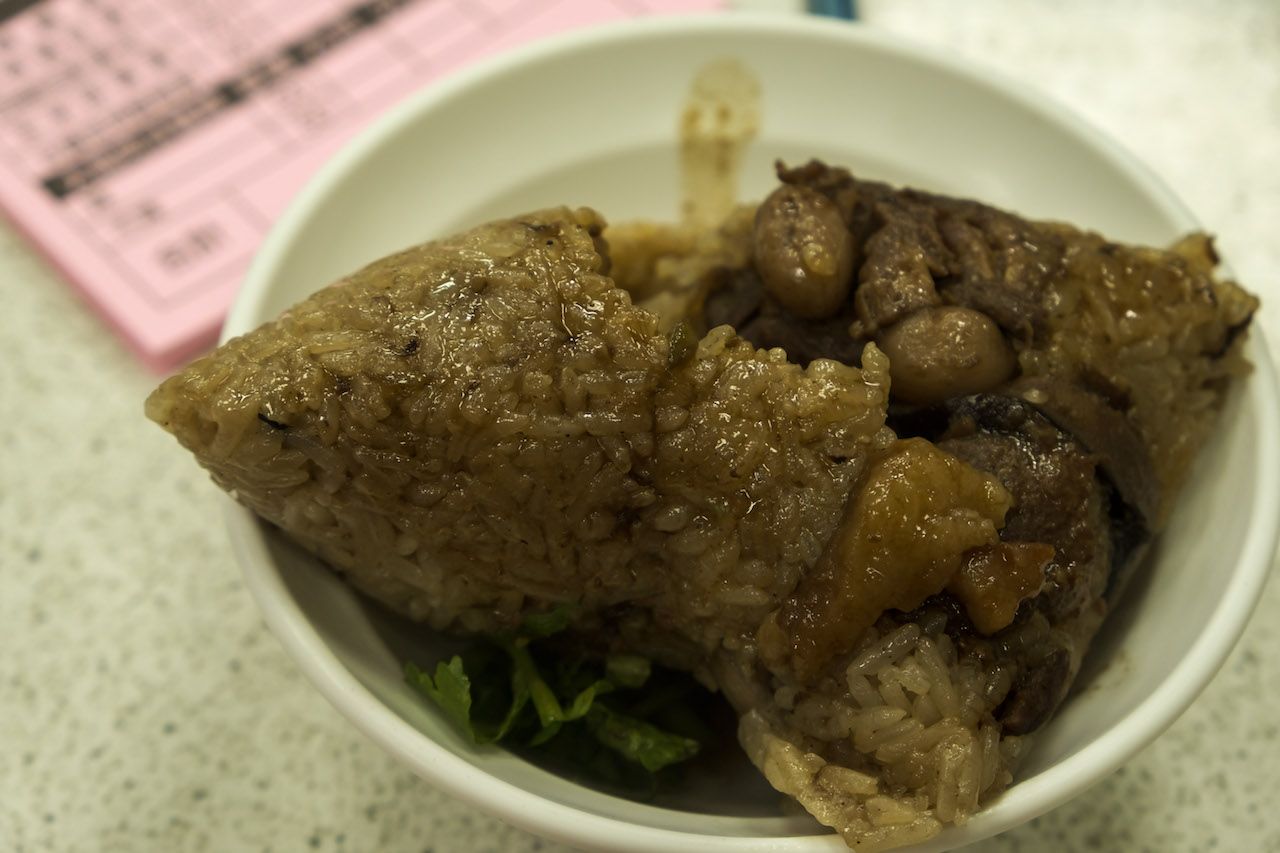 They have other variations of zòngzi here and at other places, but the ròu zòng specifically is the one to try. Besides the semi-sweet rice steamed in a bamboo leaf, which makes it amazing already, you also get raw peanuts, cilantro, egg yolk, and a chunk of stewed beef inside. The stewed beef chunk adds a savory note inside what could otherwise taste too sweet. 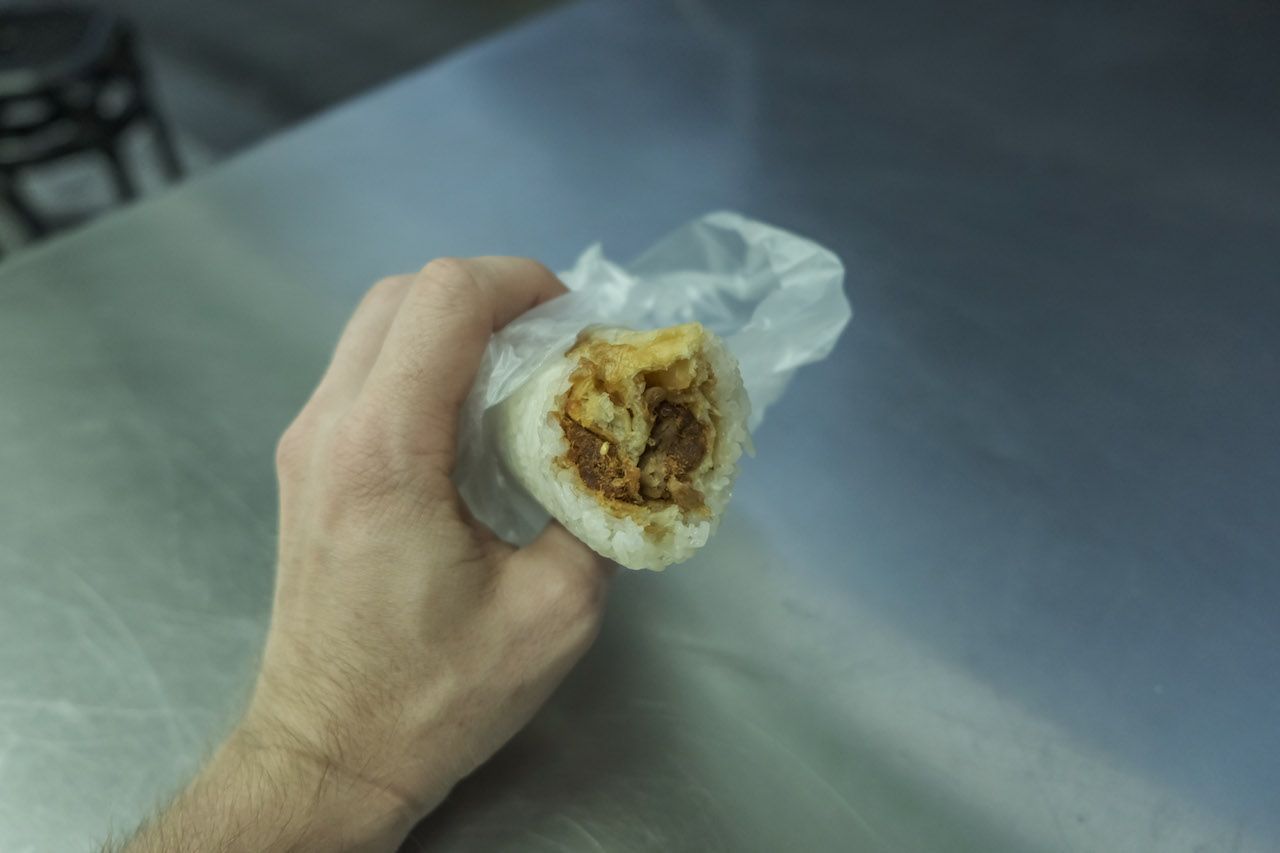 This one is usually eaten as a grab-and-go breakfast but can also be a late-night-after-the-club, um, breakfast. It’s made with sticky rice that’s flattened into a bed and topped with pork floss (pork meat boiled in a savory soy sauce until it pulls apart and is then dried in ovens), mushrooms, pickled greens, and a Chinese donut bread. The whole thing is then folded and tightly rolled into a seamless oblong wrap. The sticky rice provides a soft outer layer while the Chinese donut inside finishes with a stiff crunch. 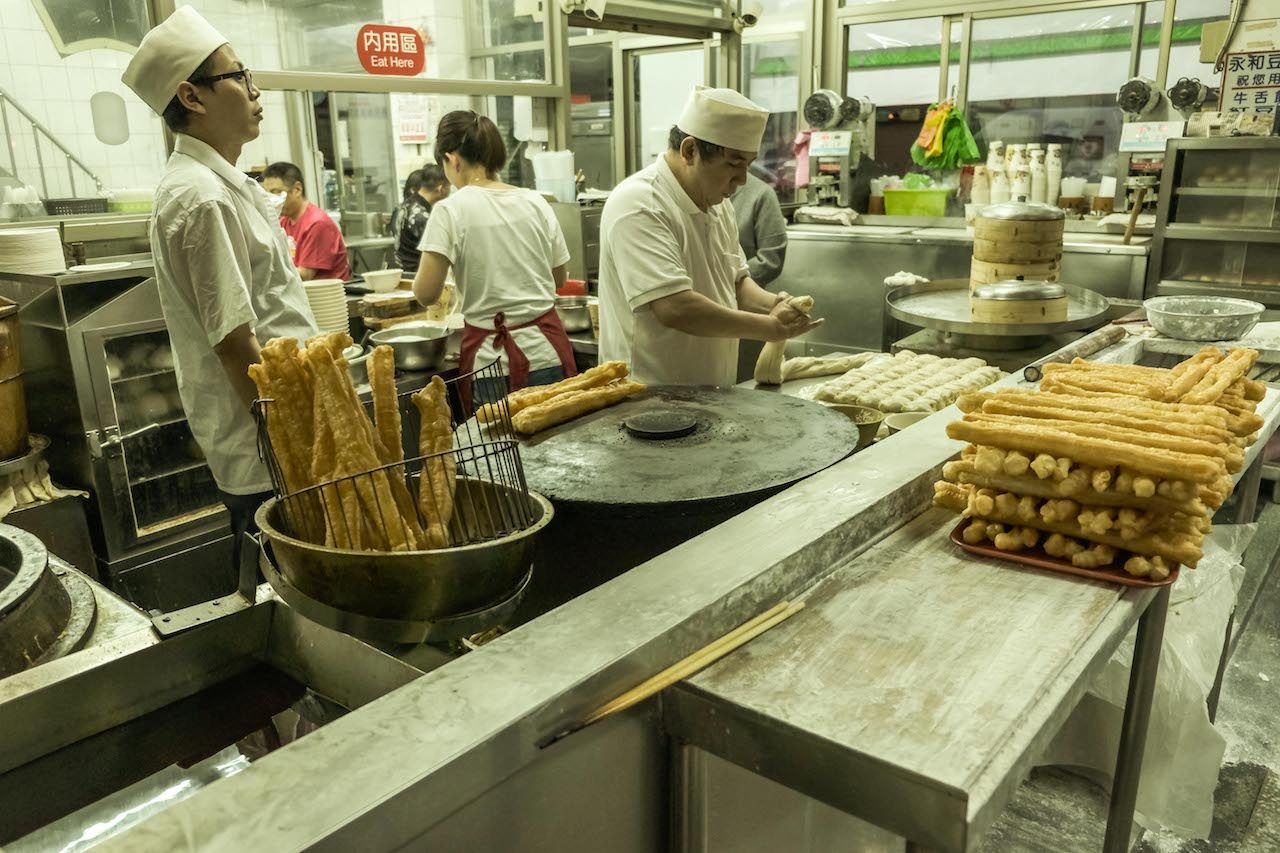 Try the rice wraps at Yonghe Soy Milk King, which is just a five-minute walk south on Fuxing Road from the Daan MRT station and hidden next to a fire station. Lucky firemen. This corner is open 24/7, and it’s always on the menu. Yonghe Soy Milk King is relatively popular with locals, but as a visitor, you’d never think to find it or go looking for it here. There’s also a list of delicious items like as dòu jiāng (soy milk) and xiǎo lóng bāo (soup dumpling), but what you’ll keep coming back is the fàn tuán (rice wrap).

Food + DrinkWhy Mumbai’s Most Popular Street Foods Are Made With Portuguese Bread
Tagged
Food + Drink
What did you think of this story?
Meh
Good
Awesome

Harrowing Footage of Taiwan Plane Crashing Through a Bridge

From Fried Chicken Ass To Stinky Tofu: A Food Guide To Taipei City

How To: Deal With a Long Layover in Taiwan