California is home to some of the biggest, and oldest, trees in the world. Many lie along a stretch of the state from Sequoia National Park to Redwoods National Park.

The list below includes five of the tallest named trees in California that you can visit, as well as four groves where you’ll find massive old-growth trees (which means they’ve never been logged). Some of the tallest trees require a hike to get to, while others are well-signed and only take a quick stroll to stand at their base.

Remember that these trees are some of the tallest and oldest things on Earth and deserve your respect. It’s not enough to leave no trace — you need to leave it better than you found it, which includes picking up trash and speaking up if you see someone doing something that could damage the trees. After all, you need to respect your elders — and these trees are definitely your elders.

A quick note: forest fires are an enormous problem in California, and many of the trees below have been dangerously close to being lost. Always obey regulations about camping fires, cooking fires, and smoking, since they’re all aimed at reducing the risk of a spark taking off.

The tallest named trees in California 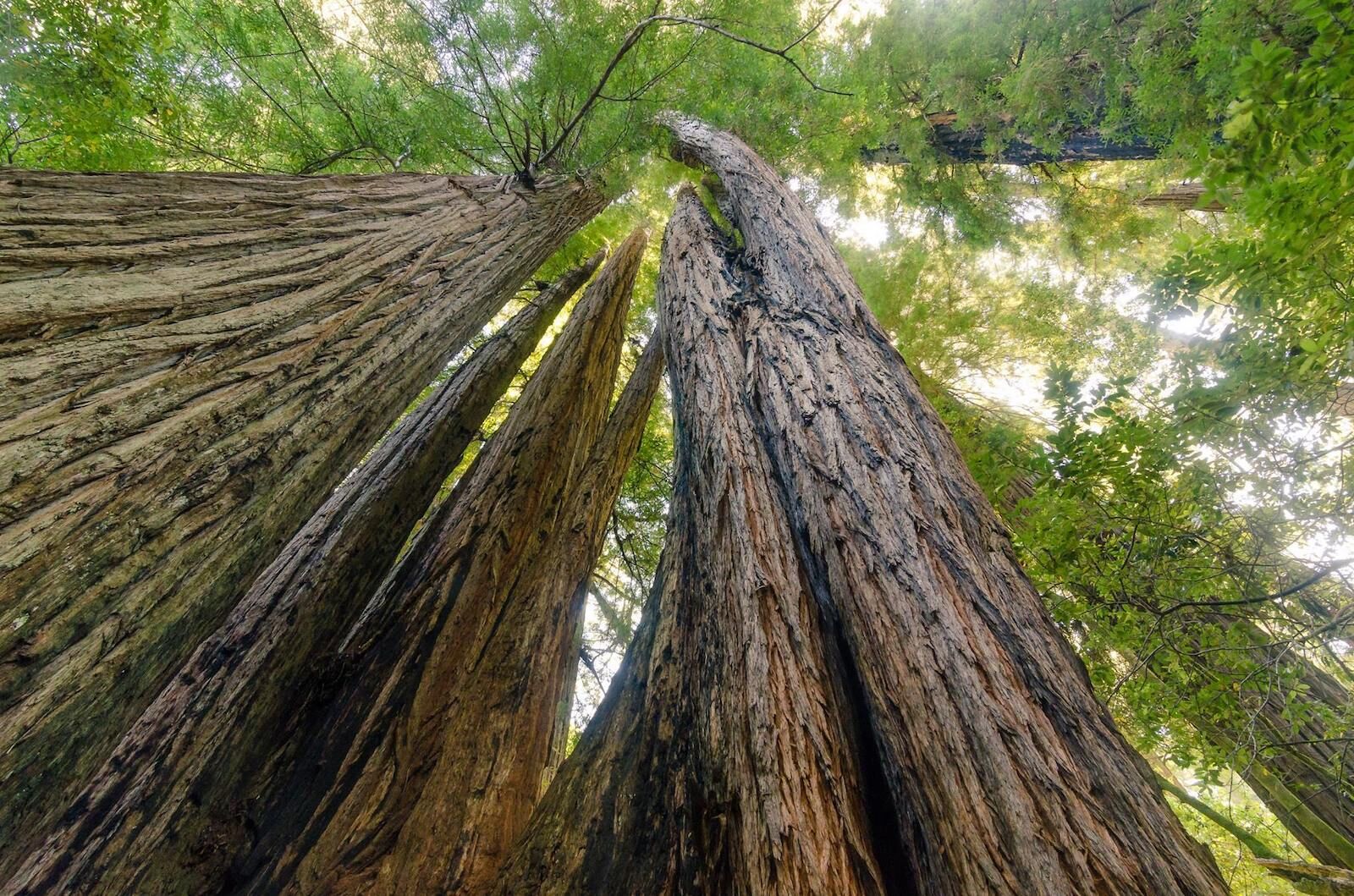 No, it’s not “the” Hyperion — it’s just Hyperion. It started as a tiny little seed about 700 or 800 years ago, which doesn’t put it anywhere near the top of the oldest trees list. But when it comes to the tallest trees in California, Hyperion tops the list. Oh, and it’s also the tallest tree in the United States — and in the whole world, as far as researchers know.

This coastal redwood stands nearly twice as tall as its neighbors and stands as a testament to the incredible power of nature and resilience. Hyperion has certainly lived through several wildfires and was nearly lost to time. It’s near the border between an old-growth (never logged) and new-growth (once logged) forest. Had loggers gone much farther, Hyperion may have been gone.

Hyperion is a coastal redwood (Sequoia sempervirens). But don’t get it confused with the inland giant sequoias. Redwoods are taller and grow closer to the coast, while sequoias are thicker and tend to be more inland.

If you want to see Hyperion, you’ll need to do some deep research. The location is unmarked in Redwood National Park, and those who know where it is treat it like a loved one. If you find Hyperion, don’t even think about breaking off any bark. The tree is so beloved that you can expect other hikers and campers to defend it if they see you doing anything remotely questionable anywhere near Hyperion’s trunk or root space.

Some say Hyperion isn’t even the tallest in the surrounding woods but that it’s just a decoy to protect hikers from finding the other tallest trees. Is that true? Maybe. But if you care enough about trees to find out, you probably care enough to know that foot traffic can hurt the untouched forests. Be content with Hyperion, and let the scientists worry about the other trees growing in the amazing ecosystem. 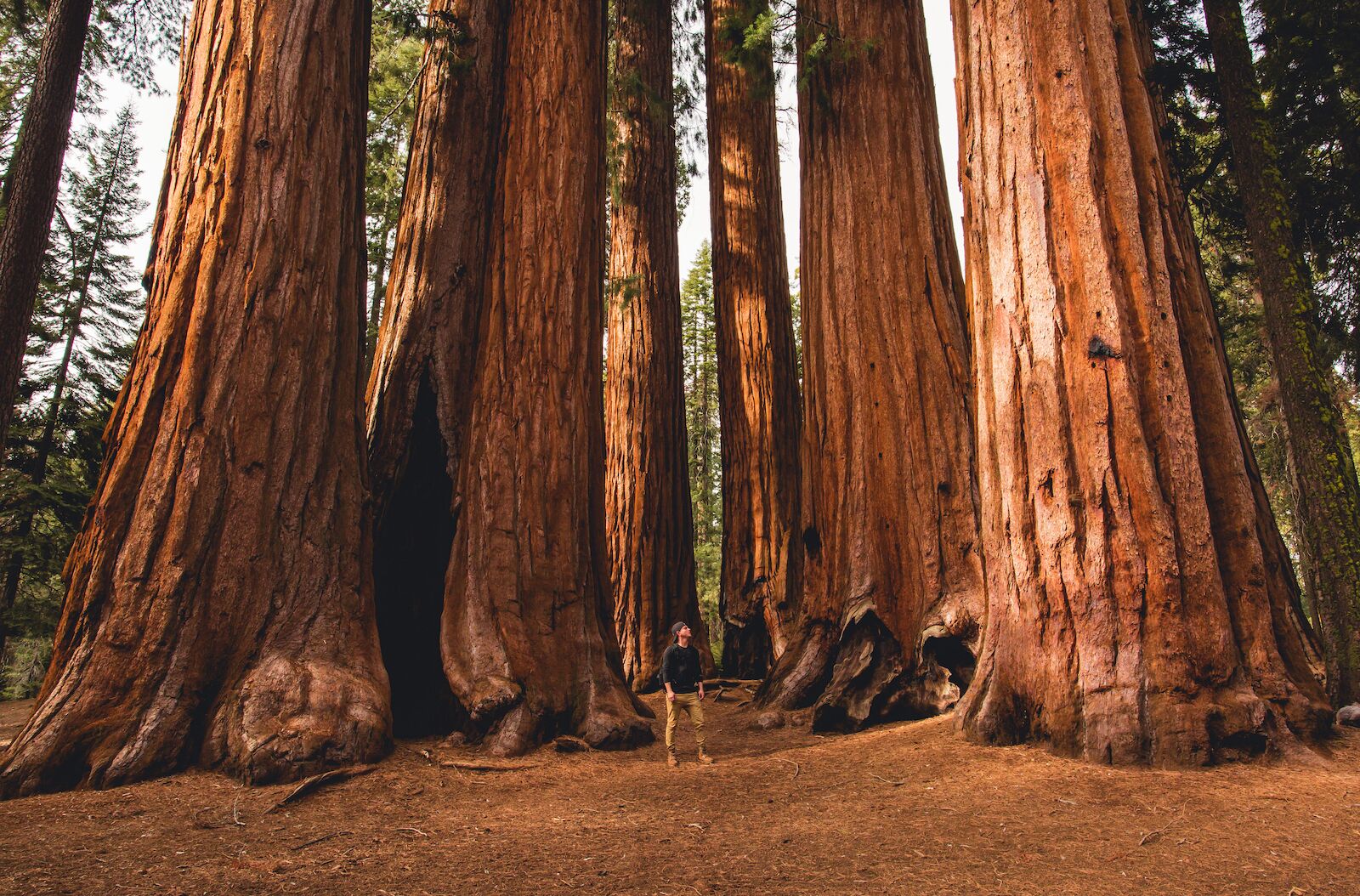 Helios isn’t just the second tallest tree in California, it’s the second tallest in the world after Hyperion. Like Hyperion, Helios’ location isn’t something you’ll just find on a map, though park rangers will tell you it’s in the Helios Grove. You’ll have to do a little research to try to find it, and even then, it may be hard to guess exactly which of the massive trees near you is Helios.

Very close to Helios are two other similarly named trees: Icarus, at 371 feet tall, and Daedalus, at around 360 feet.

If you find Helios, consider keeping its location secret, as many other hikers have done. It’ll help protect the tree from damage and, hopefully, allow it to continue to break size records in the future. 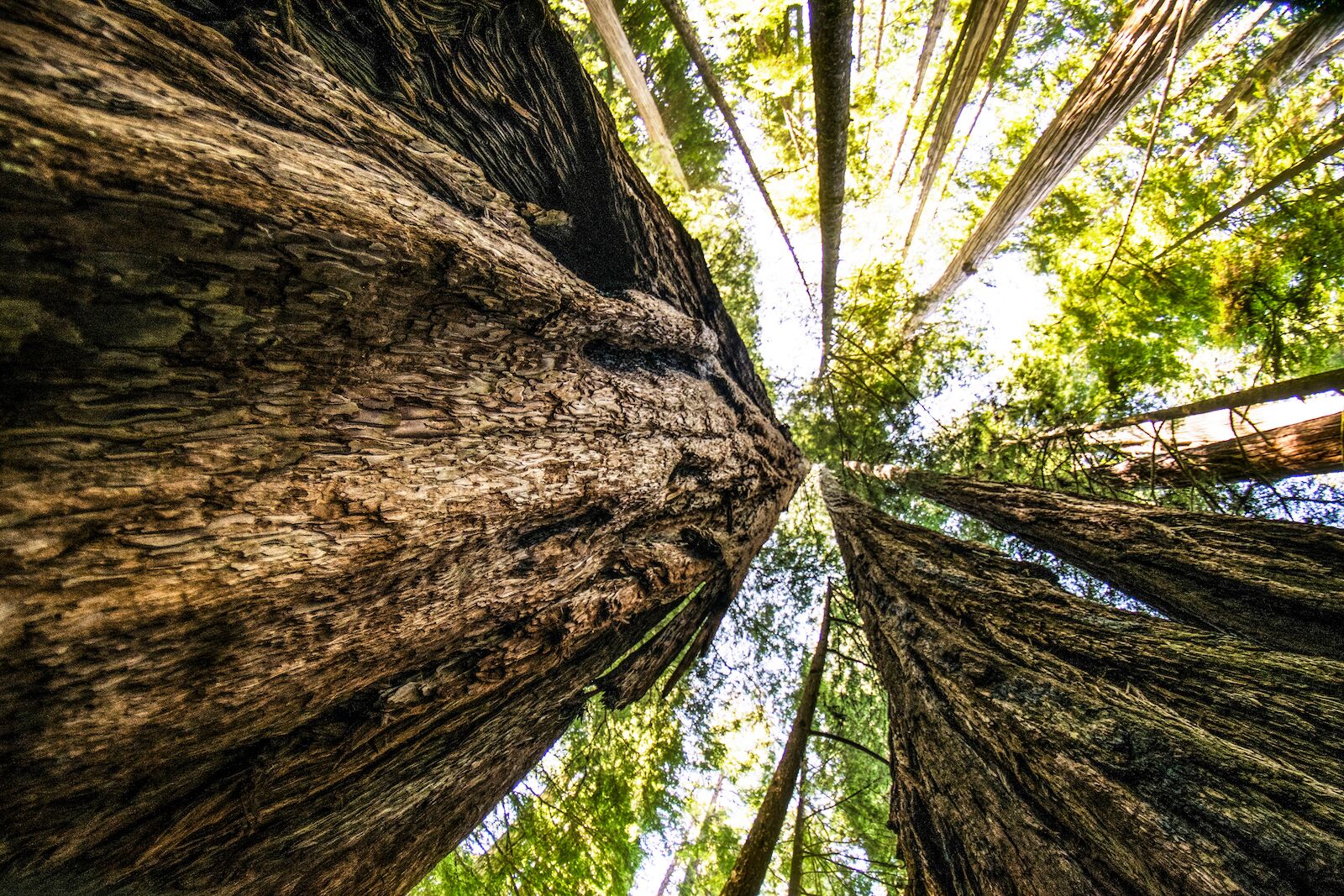 Tree-huggers may overlook Jedidiah Smith Redwood State Park in favor of areas with more well-known groves, but the park is home to the Grove of Titans, which holds several of the top 10 tallest trees in California. The top honor in terms of size goes to New Hope, which is near several other famous trees well over 300 feet tall. That includes Hail Storm, at around 308 feet tall (also the largest tree in the park by volume).

When you visit, you’ll want to download a map. The groves are huge and the trees are deep into the woods, so you probably won’t have cell service. Given how close it is to Redwood National Park, it’s quite easy to pair the two parks for a long weekend of standing under the tallest trees in California. 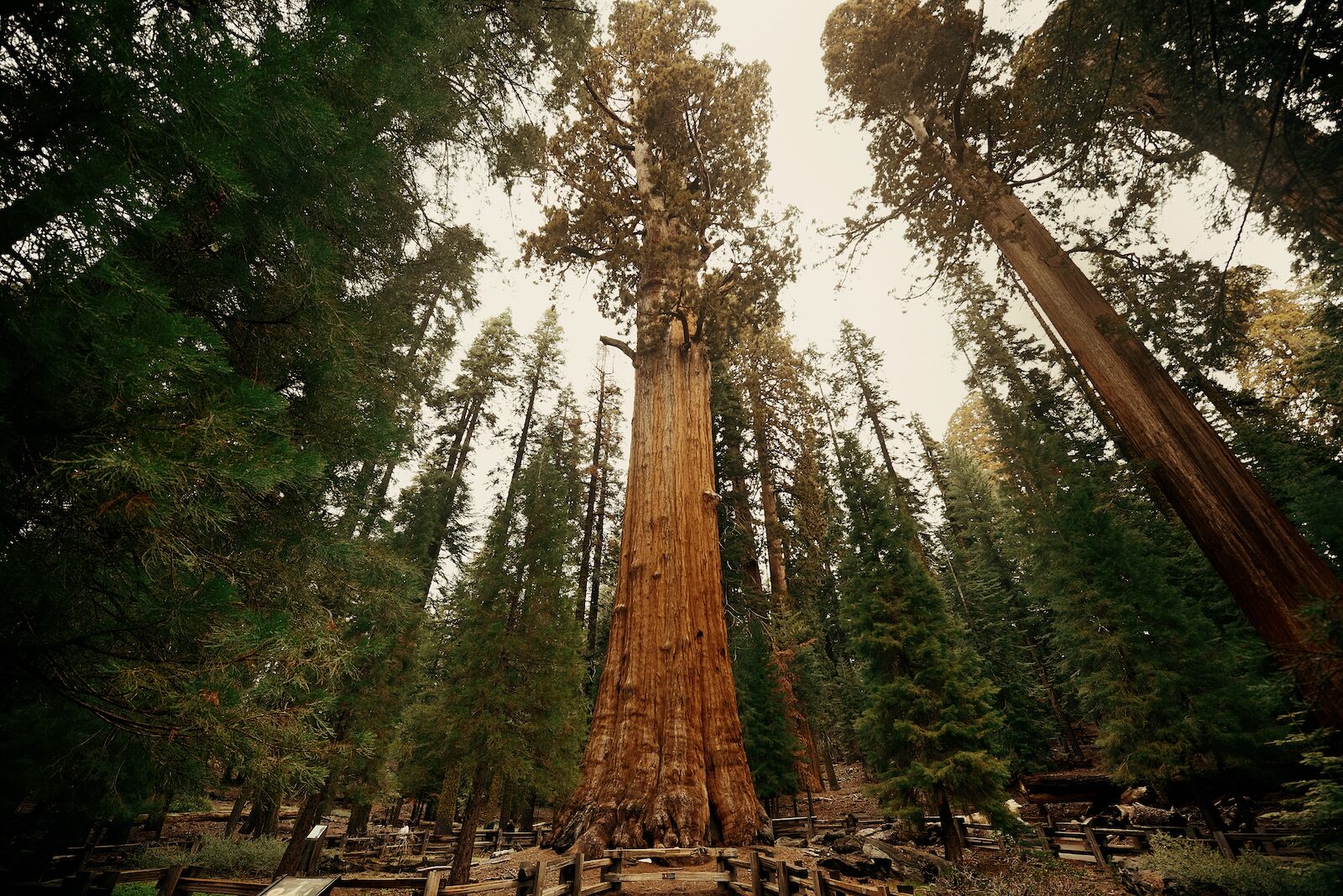 The General Sherman is no stranger to being in the news. In fact, in early fall of 2021, the massive sequoia was saved — barely — from the massive KNP Complex fire that ripped through Sequoia National Park. Firefighters and park officials wrapped the 36-foot-wide trunk in layers of flame-resistant materials and managed to save the tree. Of course, the park also runs controlled burns to help wildfires move slower when they do occur.

The world watched and cheered for the General Sherman when it survived the fires, as it’s one of the tallest trees in California as well as the world’s largest single living tree by volume. Its trunk is just over 77 feet in circumference, and at 276 feet tall, it has a volume of 52,500 cubic feet.

The General is a giant sequoia — a species that easily reaches heights of 100 feet or more. This particular tree is estimated to be 2,200 years old, give or take a century. That means it was born roughly 300 years before the first stone was laid in the Roman Coliseum.

To see it, take the park’s half-mile-long trail to the Giant Forest Sequoia Grove. You can camp in the park or rent a nearby cabin for an overnight stay. 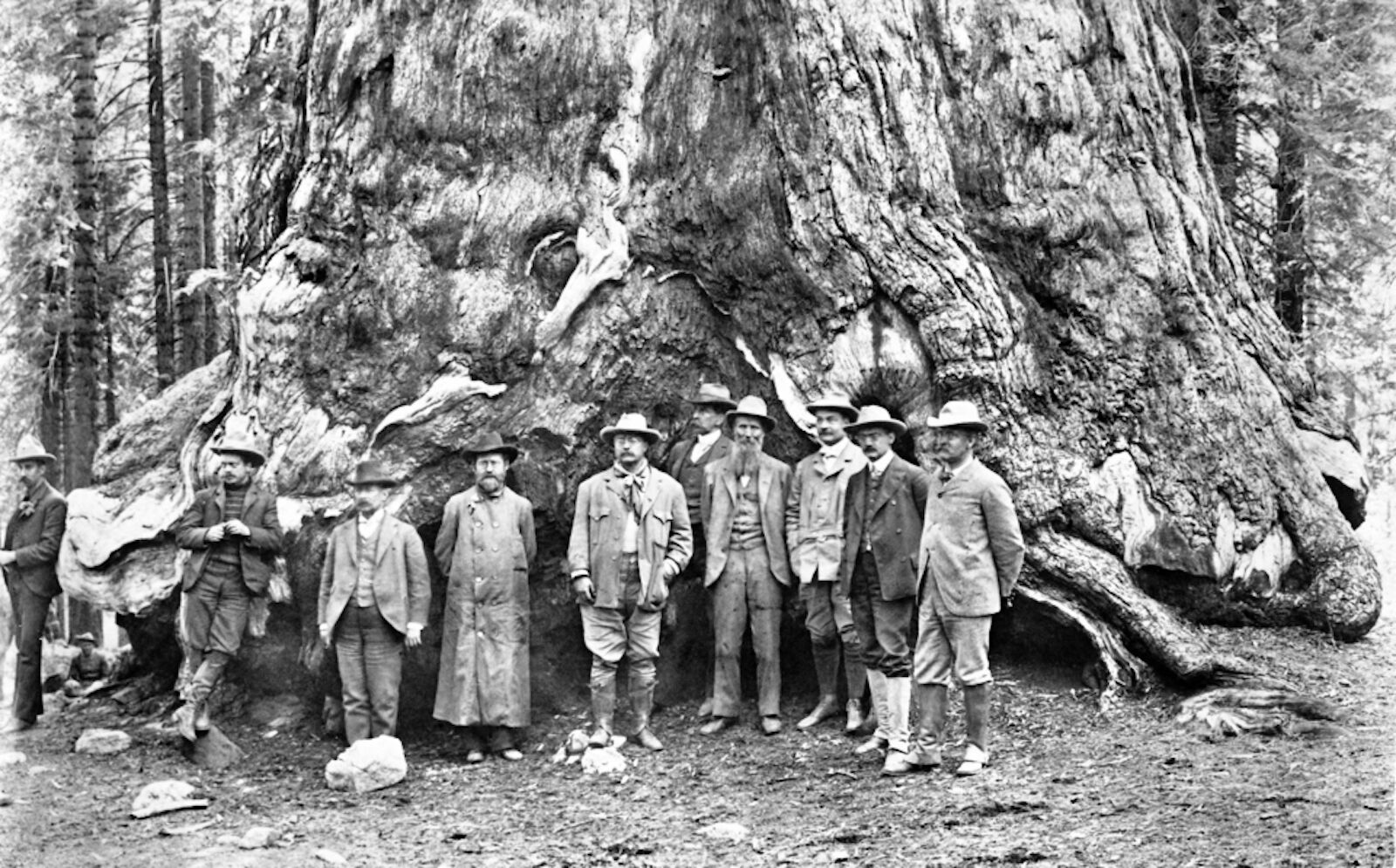 Yosemite National Park’s Grizzly Giant is one of the oldest trees in California. It’s about 2,995 years old with a 250-year margin of error, according to a 2019 study, and for a while people thought it might be one of the biggest trees, too. At about 34,000 cubic feet in volume, it’s still near the top of the list, but it ranks in the mid-20s in terms of the world’s biggest trees.

It’s definitely one of the most well-known in the country, and was one of the first huge trees to become famous. That’s partly because of its famous fans: John Muir and President Theodore Roosevelt. Today, the Grizzly Giant looks exactly the same as it did in 1903. 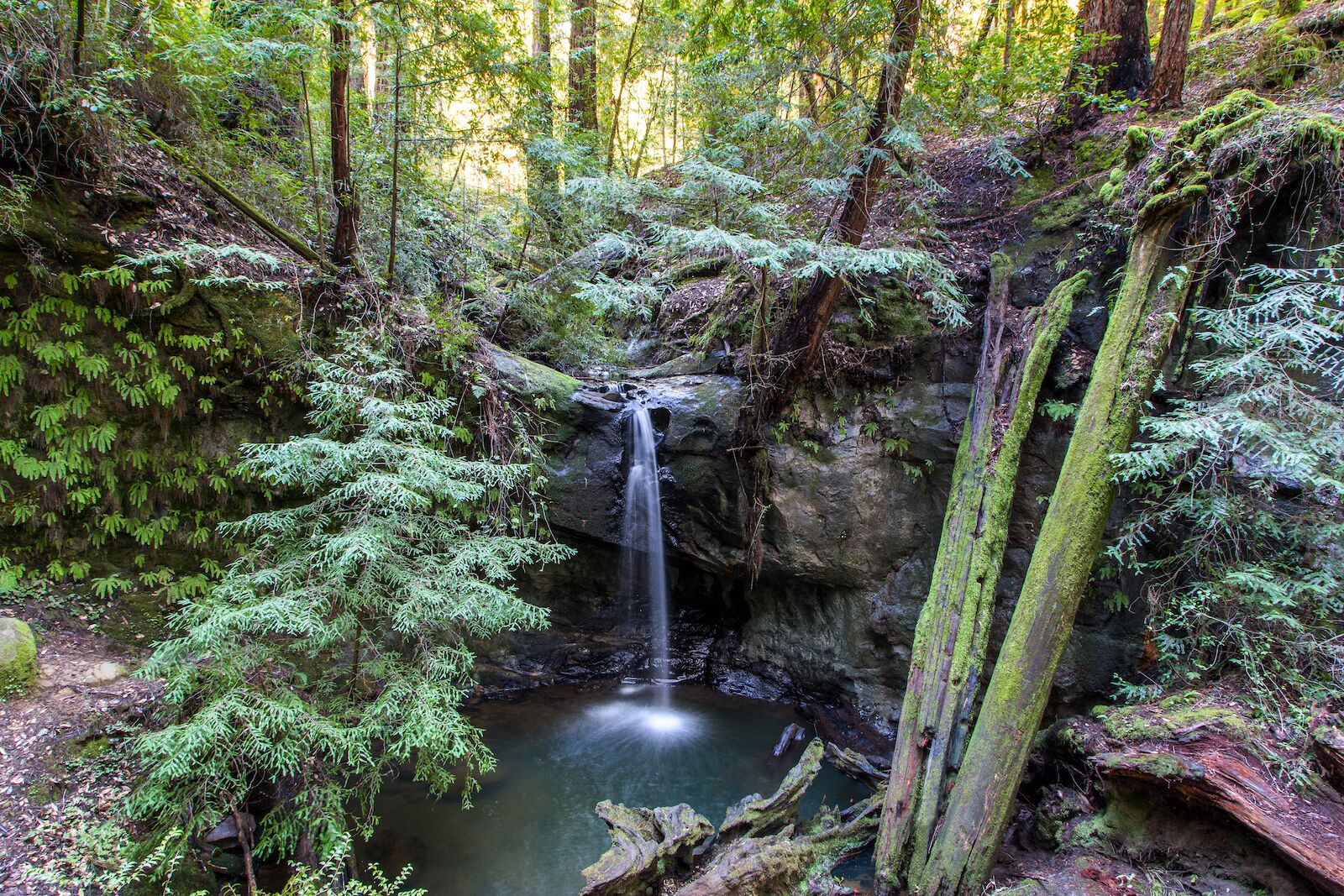 If you’re looking for some of the tallest trees in California’s northern parts but don’t want to stray too far from the city, head to Big Basin Redwoods State Park. It was the first state park in California and covers 18,000 acres near Santa Cruz (about an hour south of San Francisco). The park is primarily an old-growth redwood grove, and some trees are more than 300 feet tall. Take the Redwood Trail to see Mother of the Forest, the tallest tree in the park at 329 feet tall. You can also spot Father of the Forest and Santa Clara, plus walk into a few trees that have been hollowed out from fire damage. The Sempervirens Falls loop (photo above) is also quite gorgeous.

If you’re making a day of it, consider visiting nearby Henry Cowell State Park as well, which has several trees about 270 feet tall and more than 1,500 years old. Henry Cowell Redwoods State Park is just a short drive south of Big Basin.

Note that several sections of the park are still closed due to fire damage as of April 2022. 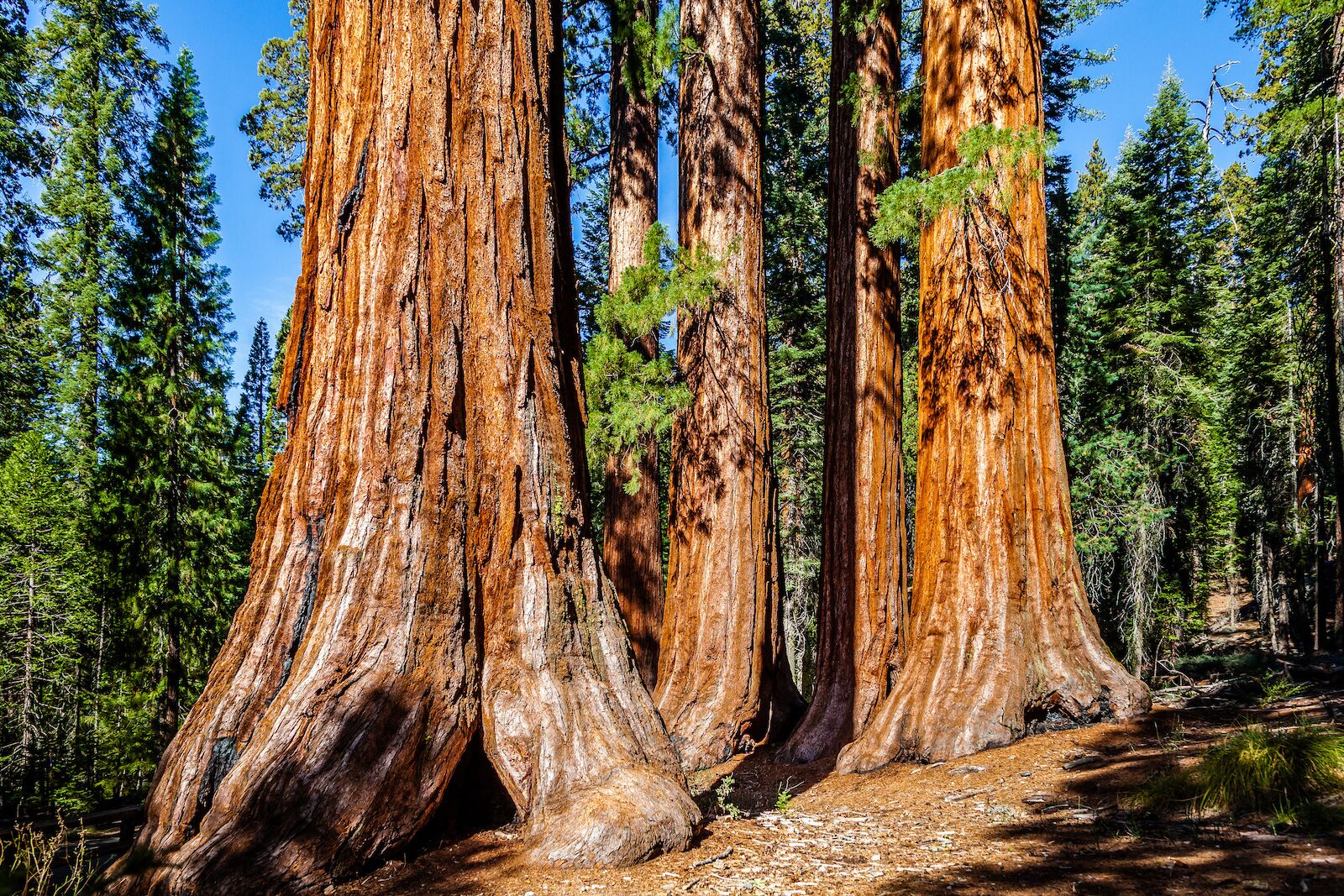 If you’re planning on a trip to see the Grizzly Giant, you might as well plan to spend the whole day exploring the Mariposa Grove, which is one of three giant sequoia groves in Yosemite National Park. It’s near the southern entrance and is home to about 500 giant sequoias. Many are named, and there’s signage in front of some of the largest trees, such as the Columbia Tree (the tallest in the park at 286 feet) and the Bachelor and Three Graces.

If the Wawona shuttle is running, you can get a free ride from the Wawona parking area to the grove trailhead. Otherwise, you’ll have to walk roughly two miles up a paved road, gaining about 500 feet of elevation. From there, it’ll be several more miles and potentially another 1,000 feet of climbing, depending on which trees you want to see.

While the Mariposa Grove is the park’s largest grove and notable as home to some of the tallest trees in California, it’s not the only grove in the park. If you’re closer to Yosemite’s western side, you may want to visit the Tuolumne Grove. You’ll hike on parts of one of the first roads into Yosemite, following the route early travelers would take in wagons as they approached the park — a journey that used to take days from San Francisco. 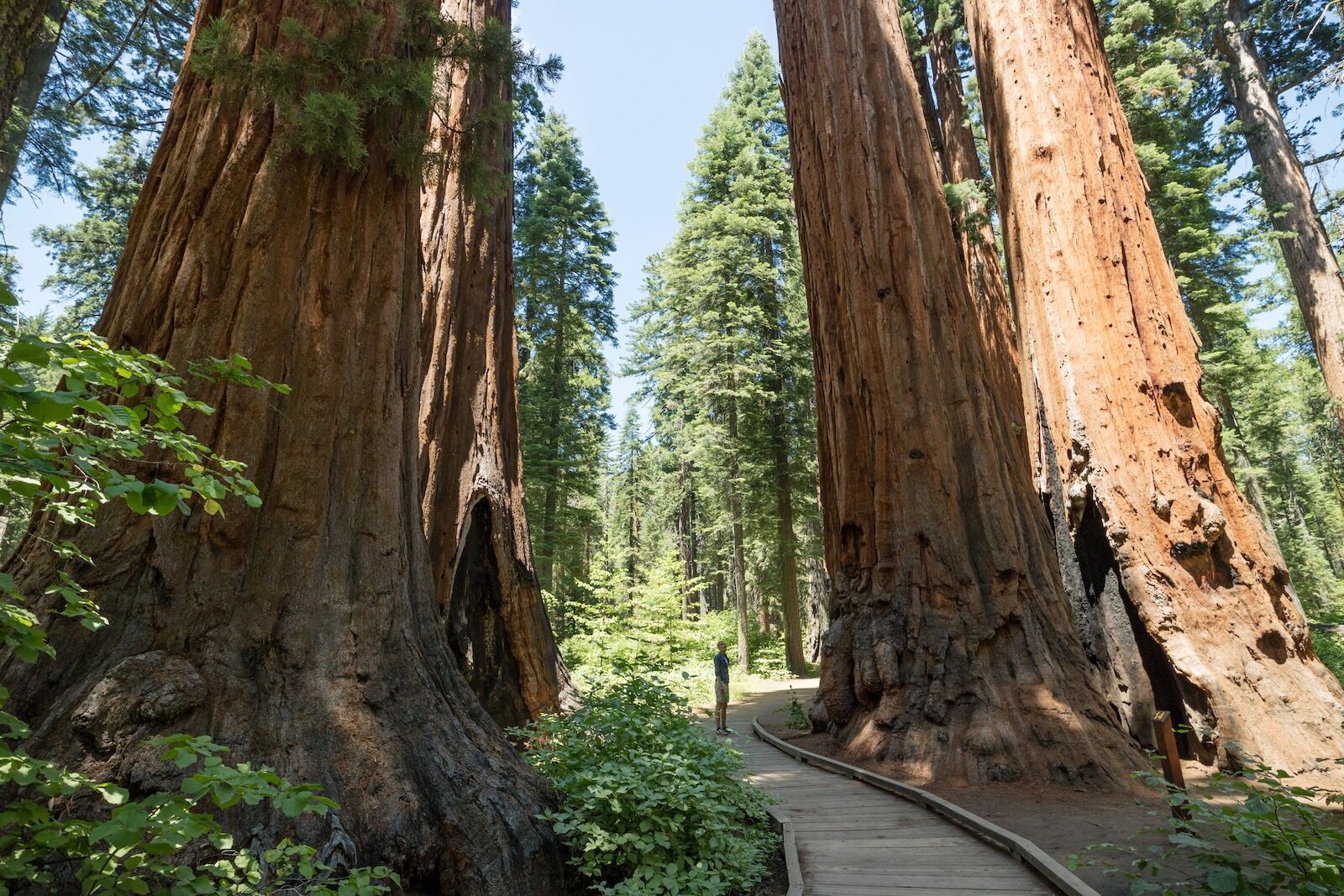 This state park is in the Sierra Nevada near Yosemite and protects two groves of old growth giant sequoias. The south grove is where you’ll find the biggest tree in the park at 250 feet tall, but both groves are absolutely beautiful and worth a stroll. And don’t get confused by the names and signage while you’re here. Tourists have been coming to see the park’s trees since the mid-1800s, when giant sequoias went by another name: Sierra redwoods, and sometimes giant redwoods. They’re still used today, though technically, the trees are sequoias (but both redwoods and sequoias are in the same taxonomic family: cupressaceae).

Calaveras Big Trees State Park has more than 100 campsites and is one of the most beautiful places to camp under the redwoods. Just bring an extra layer as the combo of high elevation and heavy shade can make the campground a bit chilly at night. You can make reservations for the campsites and a few cabins online. 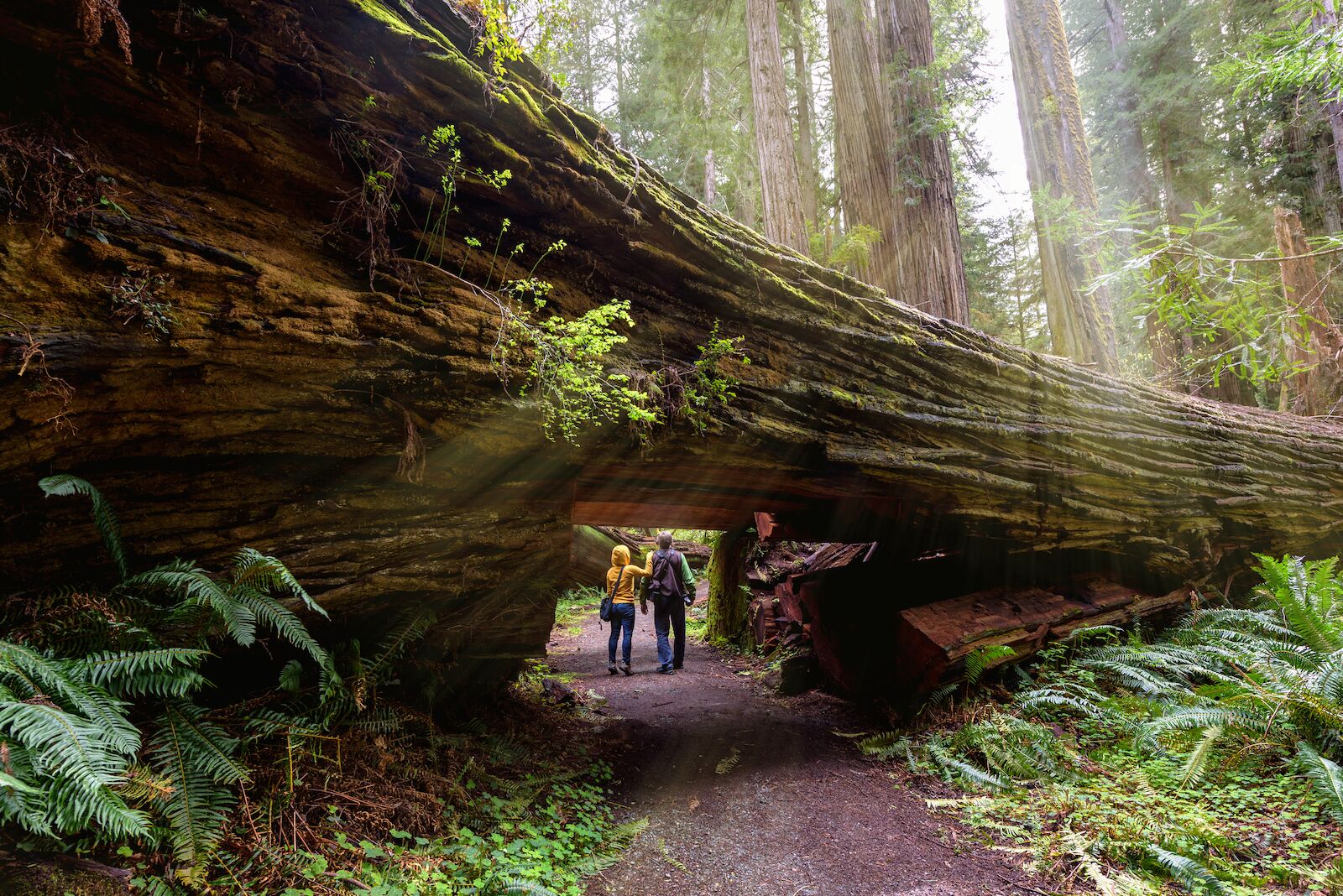 The most famous area of Humboldt Redwood State Park is probably the Avenue of the Giants, a 31-mile stretch of road with massive redwoods taller than 300 feet tall. The park is home to the world’s fourth-tallest tree as well as several more in the top 30. The tallest tree is the aptly-named Stratosphere Giant at 372.5 feet tall, give or take.

National Parks21 Spectacular and Unique Trees and Forests Around the World
Tagged
Hiking Outdoor National Parks California, United States
What did you think of this story?
Meh
Good
Awesome