Tenerife’s rugged coastline and volcanic mountains are changing the profile of visitors to this island off Africa’s northwest coast. Part of Spain’s Canary Islands, Tenerife enjoys year-round mild temperatures and 352 days of sunshine. That enviable weather, combined with cheap booze and all-inclusive hotels, once attracted travelers who turned the island’s southern shores into a party hotspot.

Today, though, nature enthusiasts come to the area for its outdoor offerings, many of which center around the famed Montaña Roja, or Red Mountain, a formerly active volcano that is today a peaceful peak. Some travelers base themselves in the tiny coastal village of La Tejita, a newly popular location for the wellness and digital nomad community. It’s also a good place for you to stay as you hike, trail run, swim, kitesurf, or find some other way to savor southern Tenerife’s impressive landscape.

1. Hike the trails of Montaña Roja. 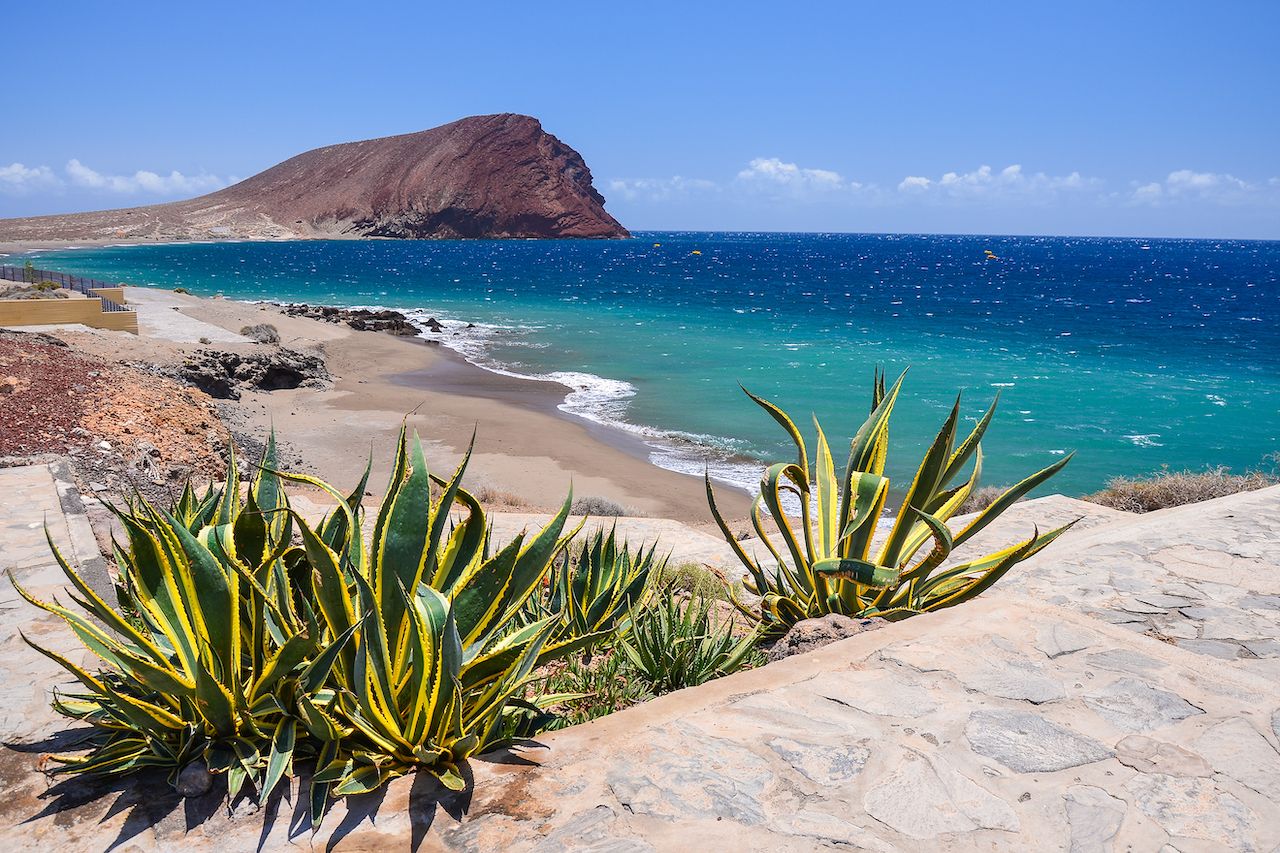 Stepping on Montaña Roja’s trails, you can’t help but feel like you’ve landed on the moon. At 410 acres, the entire natural preserve is made up of large-grain sand, rocks, and craters, reminders of the time when volcanic activity and lava spill designed its surface. Reaching 1,030 feet, the mountain’s summit can be accessed via a well-maintained trail system. Short but steep, the hike requires at least a moderate level of effort and physical ability.

The routes can be approached from two sides. If you face the mountain directly, you’ll find an information display that tells the story of the area and outlines the path up. Alternatively, approach the hike from the El Medano side, where the trail is a bit shorter and steeper. Eventually, all trails merge into one, ascending to the peak.

Another peak to conquer in the nature reserve is Montaña Bocinegro. Significantly shorter, at 118 feet, this is an easy hike and a fantastic way to see the beach enclave of El Medano from above, observing kitesurfers and the buzzing life at the village in the background.

2. Trail run in the natural reserve. 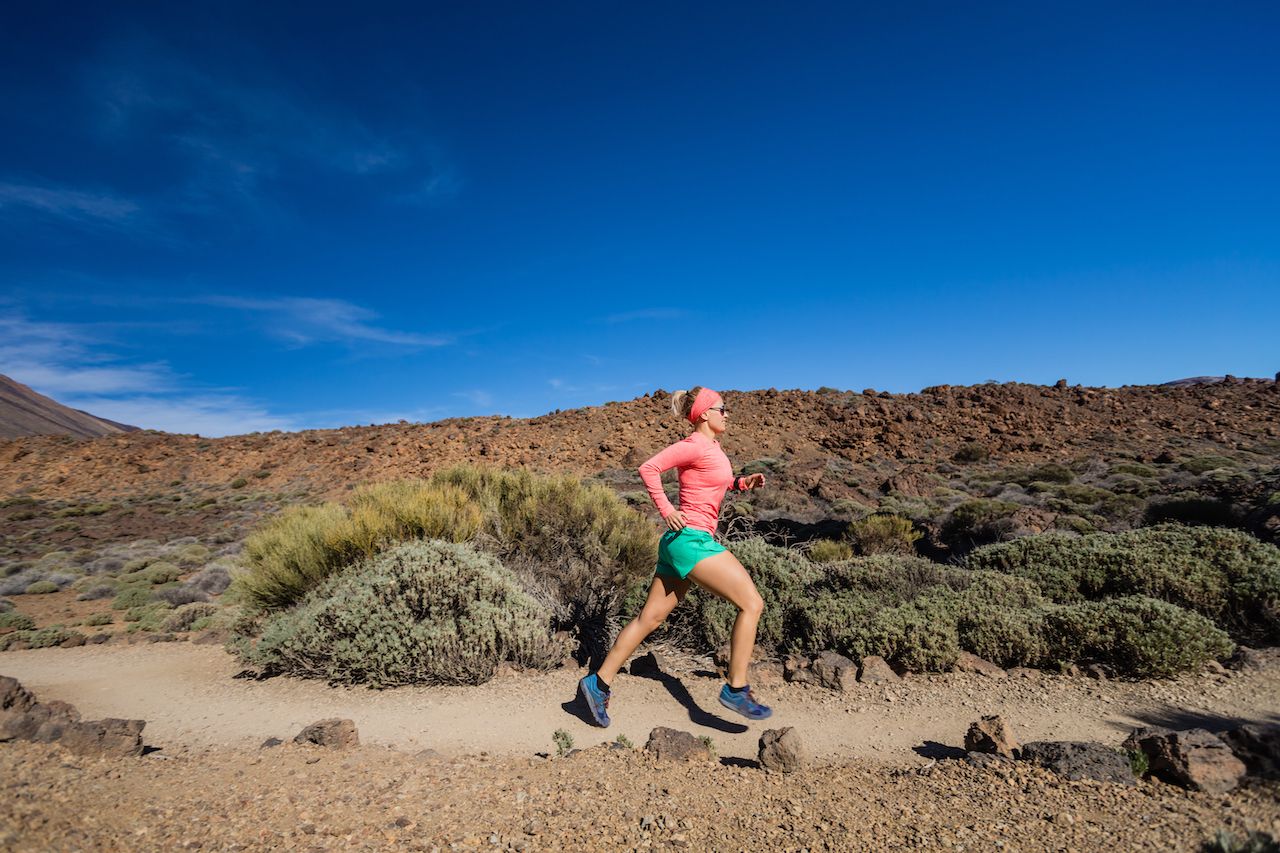 If you enjoy trail running, you’ll be invigorated by Montaña Roja’s routes. The trick is to be fully present with every step, in order to safely traverse the rocky surface. At varying levels of difficulty, and with changing altitude, running across the entire preserve takes anywhere from 45 to 90 minutes depending on the pace. Runners can challenge themselves to cross the fossil dunes of La Tosca, which adds extra resistance.

Descending Montaña Bocinegro is a true challenge for balance as the path is narrow and steep. Perhaps the toughest and most exciting aspect of running here is dealing with the wind, which is ubiquitous and strong on most days, reaching 28 knots (about 32 miles per hour). The elemental force can be used both to one’s advantage for extra speed if running in its direction — though it poses an added challenge while running against it. 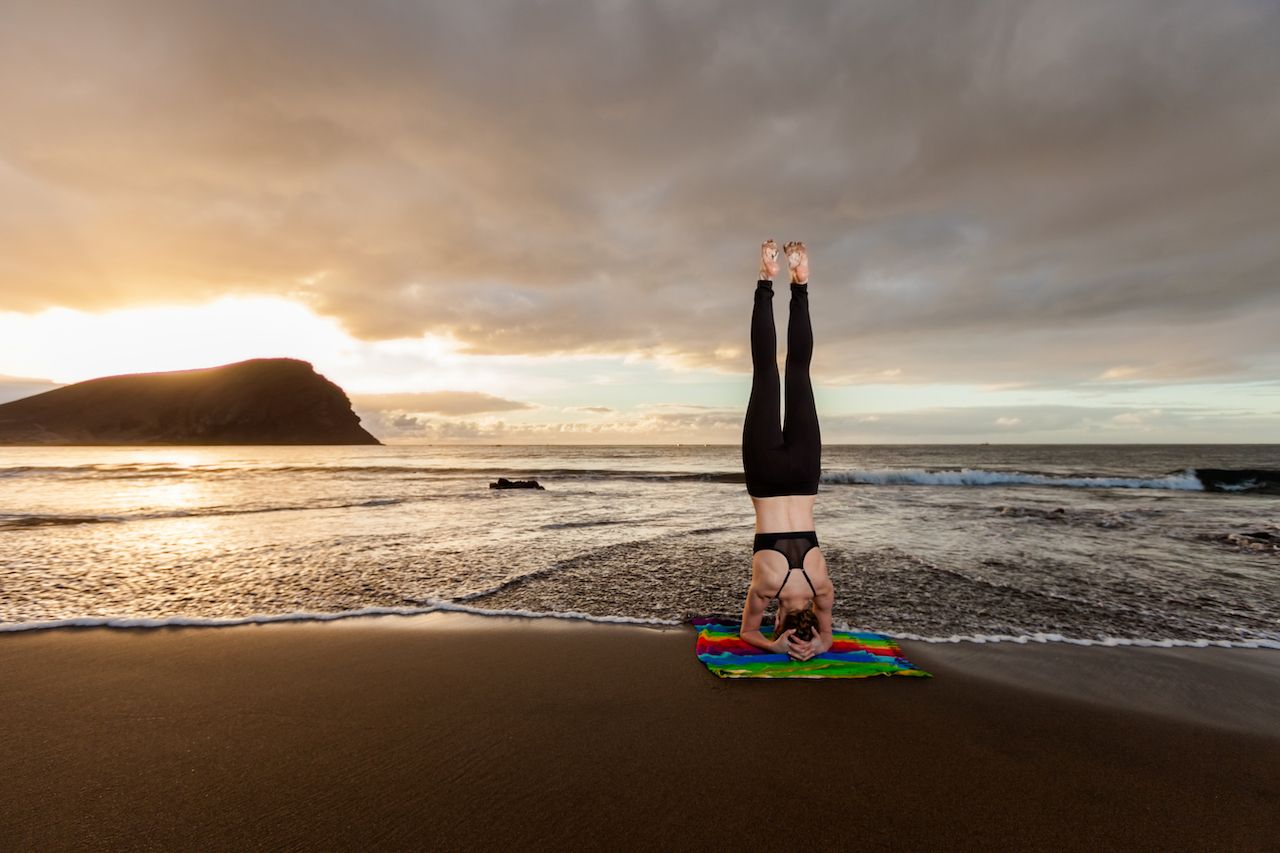 A popular way to start the day in La Tajita is with a jog or a hike, followed up by an outdoor yoga practice. Montaña Roja’s beaches are perfect for yoga, as are the north-facing flat rock areas behind them. Never crowded, the natural preserve is calm and offers plenty of nooks to set up a mat to practice. The best time of day for yoga is in the early morning or the late afternoon, after 5:00 PM, as temperatures cool down at sunset to a comfortable 70 degrees.

4. Swim in the warm island waters. 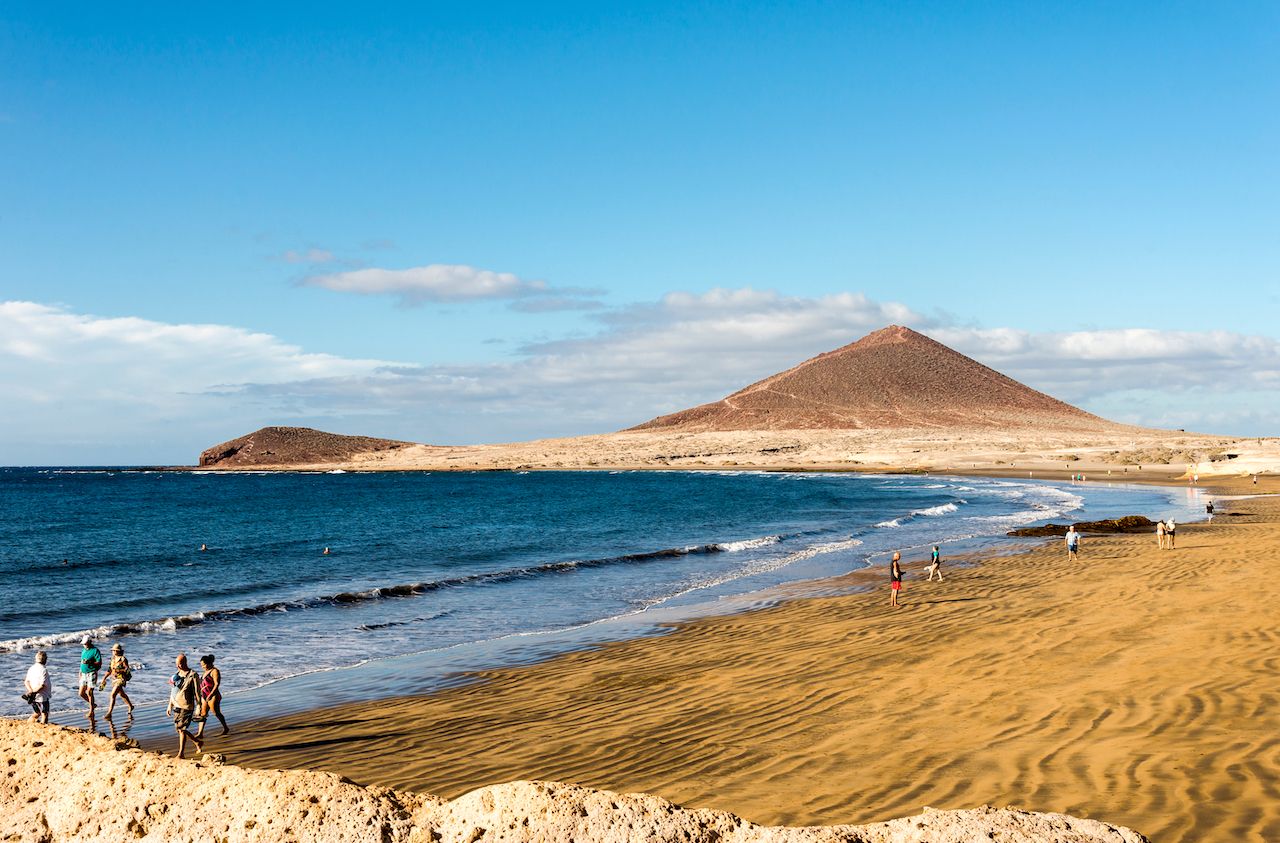 With an average annual water temperature of 70 degrees, heating up to 75 degrees between June and September, Montaña Roja’s beaches are perfect for swimming. With varying terrain, starting with a shallow rocky bottom that gradually increases in depth, Leocadio Machado is ideal for both newbie and experienced swimmers. After your swim, a less than one-minute stroll along the waterfront takes you to the village of El Medano where you can purchase a cold-pressed orange juice from one of the street-side vendors.

Playa de la Tejita, which is just west of Montaña Roja, attracts many beachgoers looking for a perfect, line-less bronze island tan. Taking in the sun fully nude is the norm here, but it’s certainly not required. Beachside lounge chairs and umbrellas are available for rent for $11.50 per day. 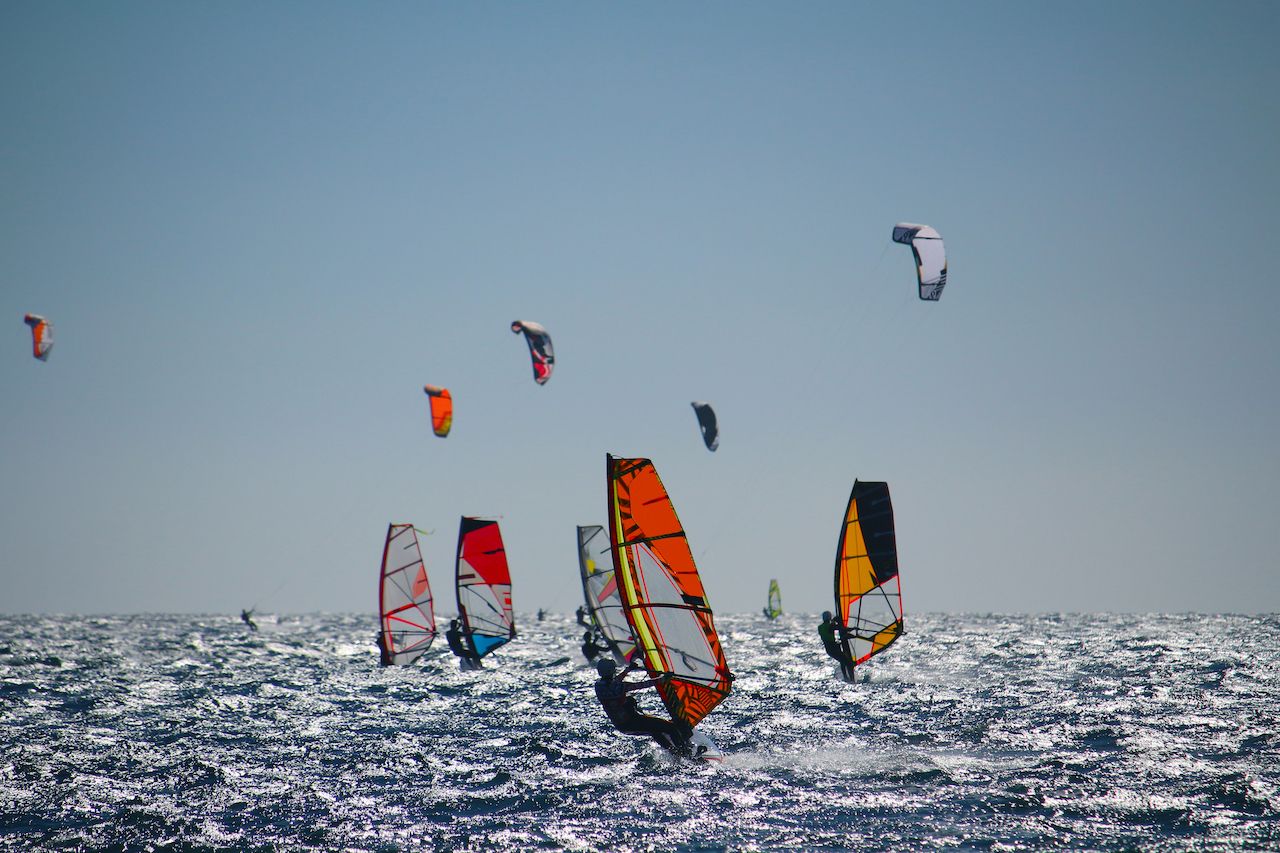 With a season that stretches from March to September, Tenerife south has long been a destination for kitesurfers who ride the winds that come sweeping in from Africa and continue unabated towards the east coast of North America. Montaña Roja’s Leocadio Machado Beach is the center of the action, drawing dozens of kitesurfers every day. You can quickly and easily rent equipment or book a lesson at the nearby Tenerife Kitesurf in El Medano.