As a regular person from New Jersey, who typically has to save up and plan meticulously before lavish vacations and even short getaways, I don’t spend a ton of time in Soho. The trendy New York City neighborhood is known for its upscale hotels, shopping, and stylish restaurants, and feels exclusive and inaccessible. But when I had the chance to stay at The Dominick hotel, a five-star hotel in Soho, I jumped at the opportunity to cosplay as a sophisticated New Yorker. And the experience was more satisfying, and more fun, than I could have anticipated.

The Dominick Hotel it should be mentioned is not in the heart of Soho, but more accurately located on the border between Tribeca and Soho. In fact, the entrance to the Holland Tunnel is right around the corner (which is great for me, a person arriving from the Garden State). To be clear, that doesn’t mean that the ambiance of the neighborhood is drowned out by a constant stream of traffic. On the contrary, the hotel is located on a quiet block and once you get inside the hotel, ambient city noises are muffled. It’s an immediate relief to feel secluded from chaos just outside the hotel’s double doors.

Even though The Dominick hotel isn’t in the midst of Soho, it’s still fair to say it’s centrally located. Guests can walk out the door and explore not just Soho, but the West Village and Greenwich Village neighborhoods.

In fact, once my partner and I checked in, we strapped our daughter into her stroller and walked all the way to Washington Square Park before heading back to the hotel. We settled at an outdoor table at Altro Paradiso, a chic Italian restaurant down the street from The Dominick that offers simple but refined dishes perfect for summer eating — and as a plus side, it’s across the street from a Ducati dealership so you watch people test out bikes while you sip your drink.

But no matter what you’re in the mood the eat, you have the most fashionable options at your fingertips: The Dominick is within walking distance to famous New York city restaurants, cafes, and bakeries, that both people who are visiting and who live in the city (or nearby) will want to try including The Dutch, Sant Ambroeus, Sugarfish, Dominique Ansel Bakery, and Laduree.

Okay, so the surrounding neighborhoods are a huge reason to stay at The Dominick, but does the hotel itself live up to its five-star promise? The answer is an unequivocal yes; this hotel is the epitome of luxury. 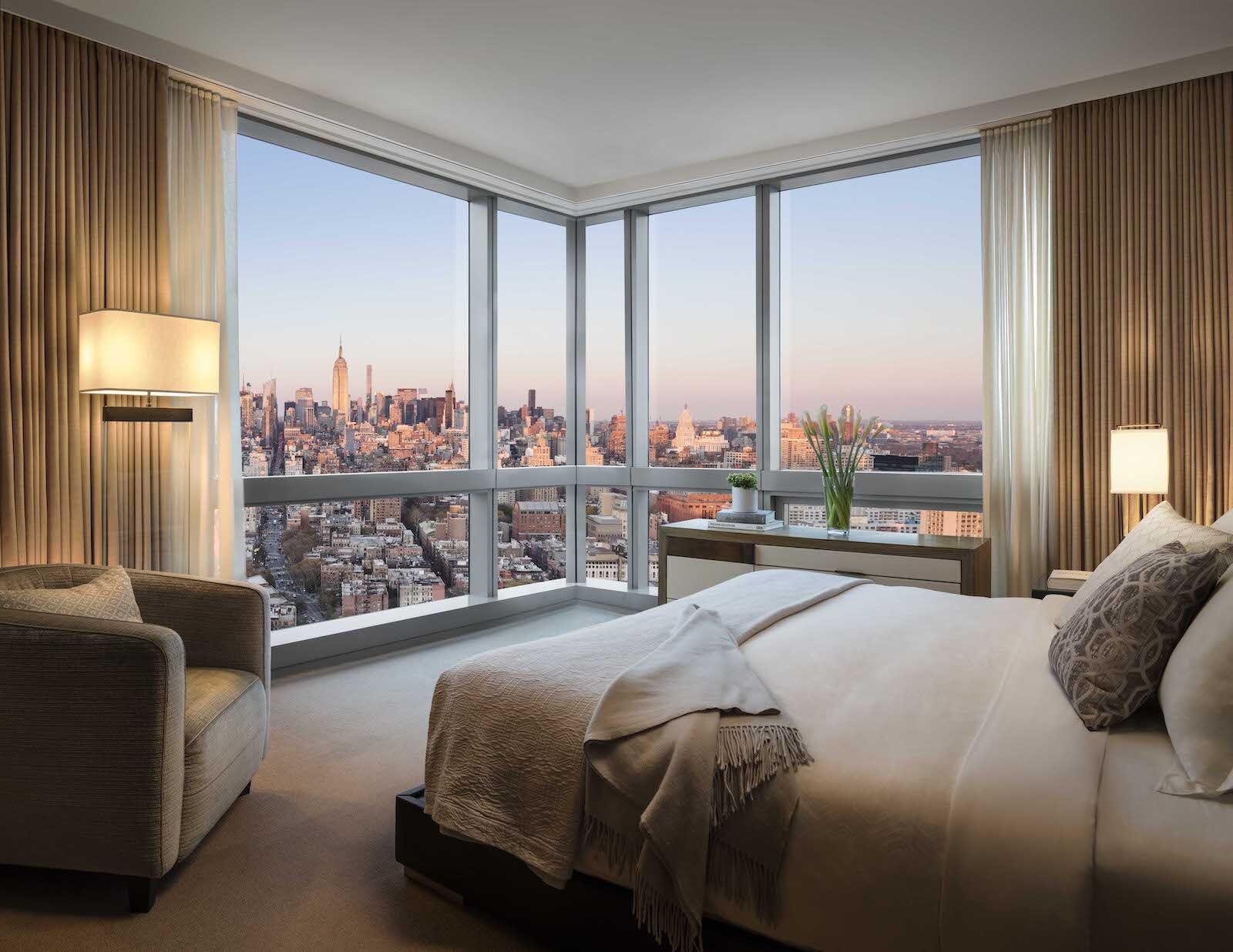 My family stayed in the SoHi one-bedroom suite, which features a living room and a master bedroom, as well as a bathroom with a shower and bathtub (more on that soon). As soon as we opened the blinds, we were both stunned into silence. From our room we could see all the way up to Times Square, from the living room, the skyline of Jersey City spread out before our eyes. 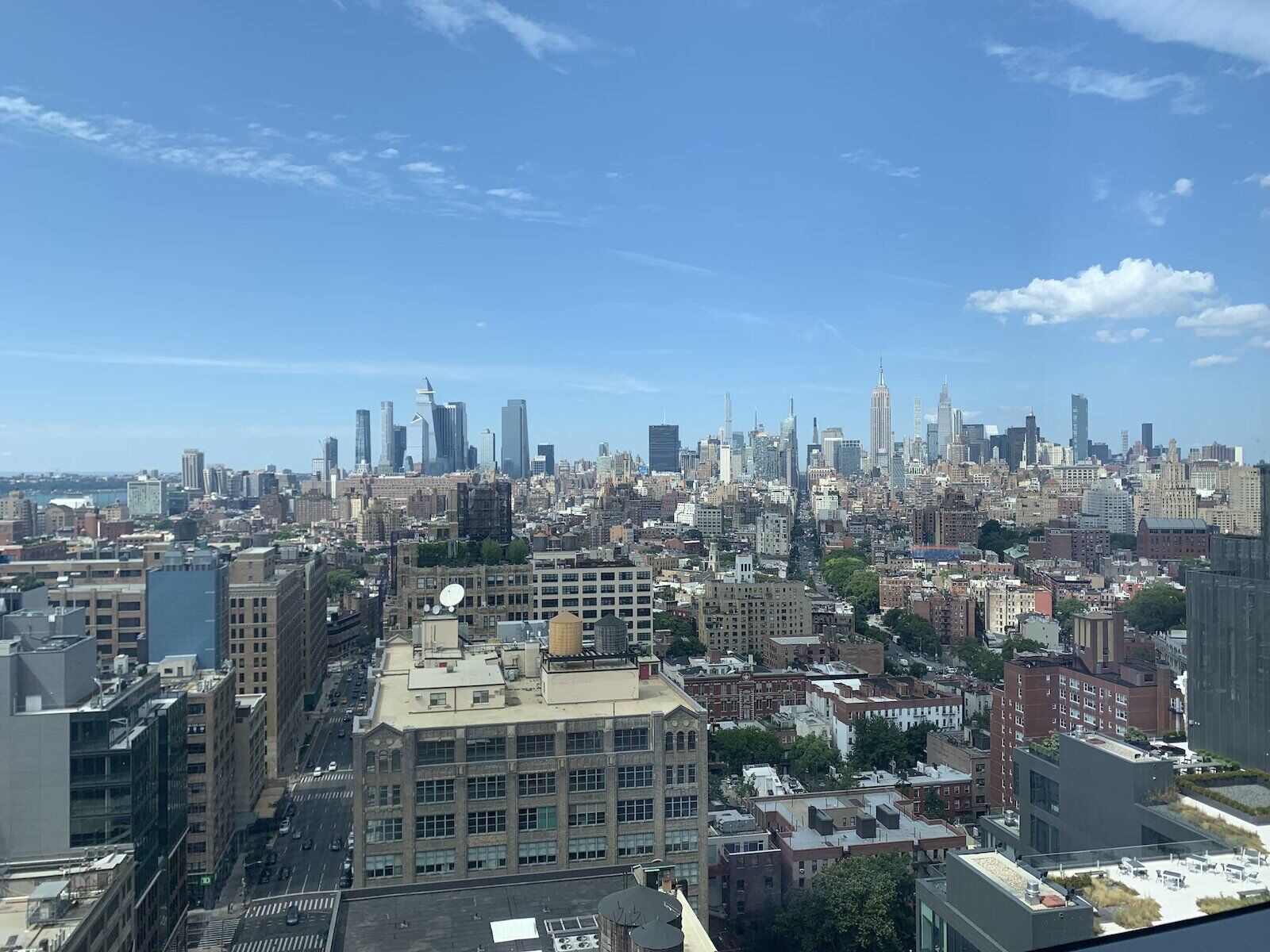 One thing to note for families is that if you’re staying with kids, and you have the means, you might strongly consider booking one of these suites. A sliding door separates the living room from the bedroom, so once the kids are in bed, the adults can order dinner or watch television without being disruptive. The only downside to this otherwise perfect hotel room is that, oddly, the bathroom doesn’t have a door (the toilet at least in its own enclosed space within the bathroom), so you can’t really shower or brush your teeth without disturbing whoever is sleeping in the bed. 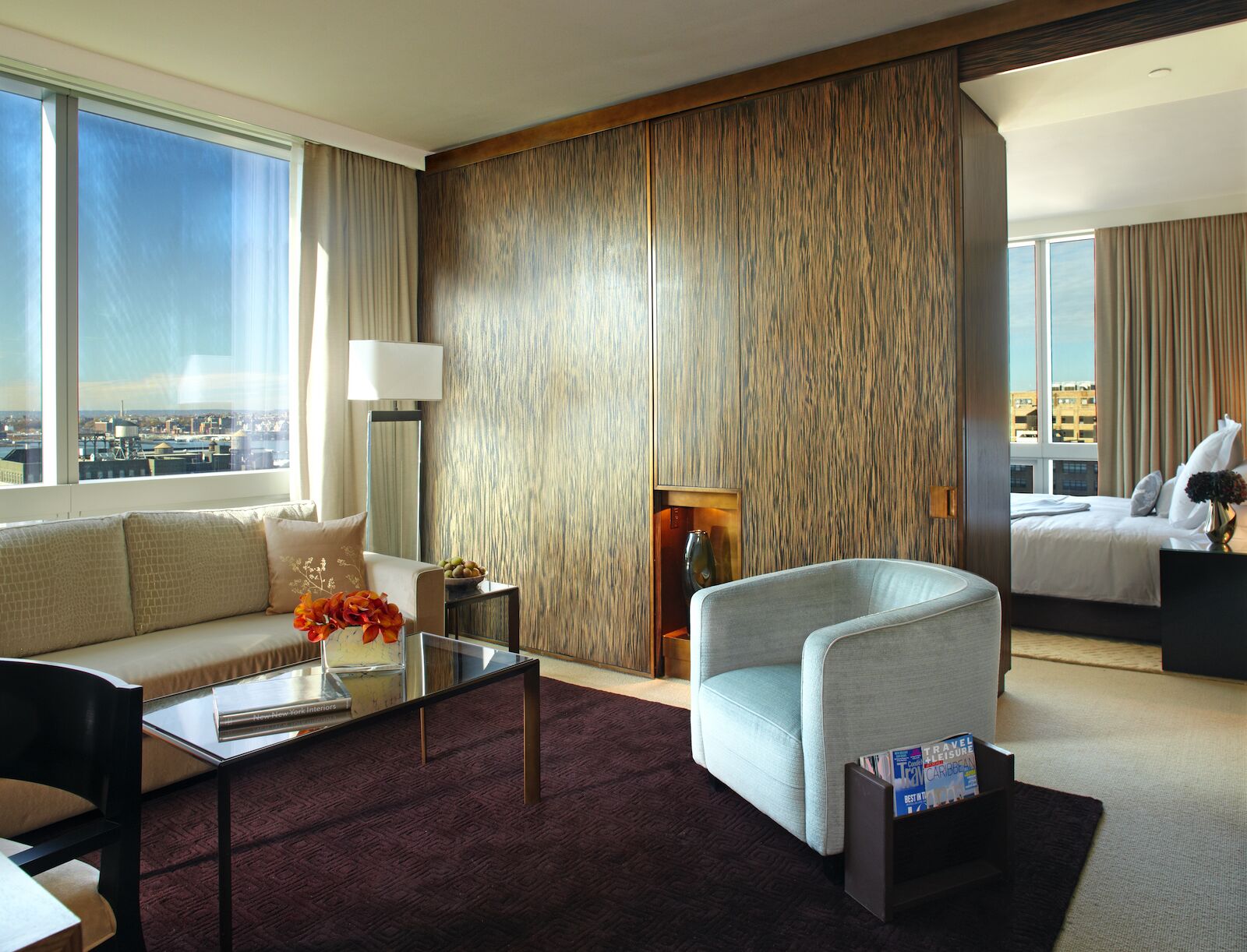 Now about that tub: It’s deep and big enough to feel like a mini jacuzzi and I can say honestly that the room was worth it for that bathtub alone, especially because tubs feel like such a rare luxury in hotel rooms these days. Parents pay attention: Lounging in the tub sipping champagne is about as relaxed as I’ve felt since my daughter was born. 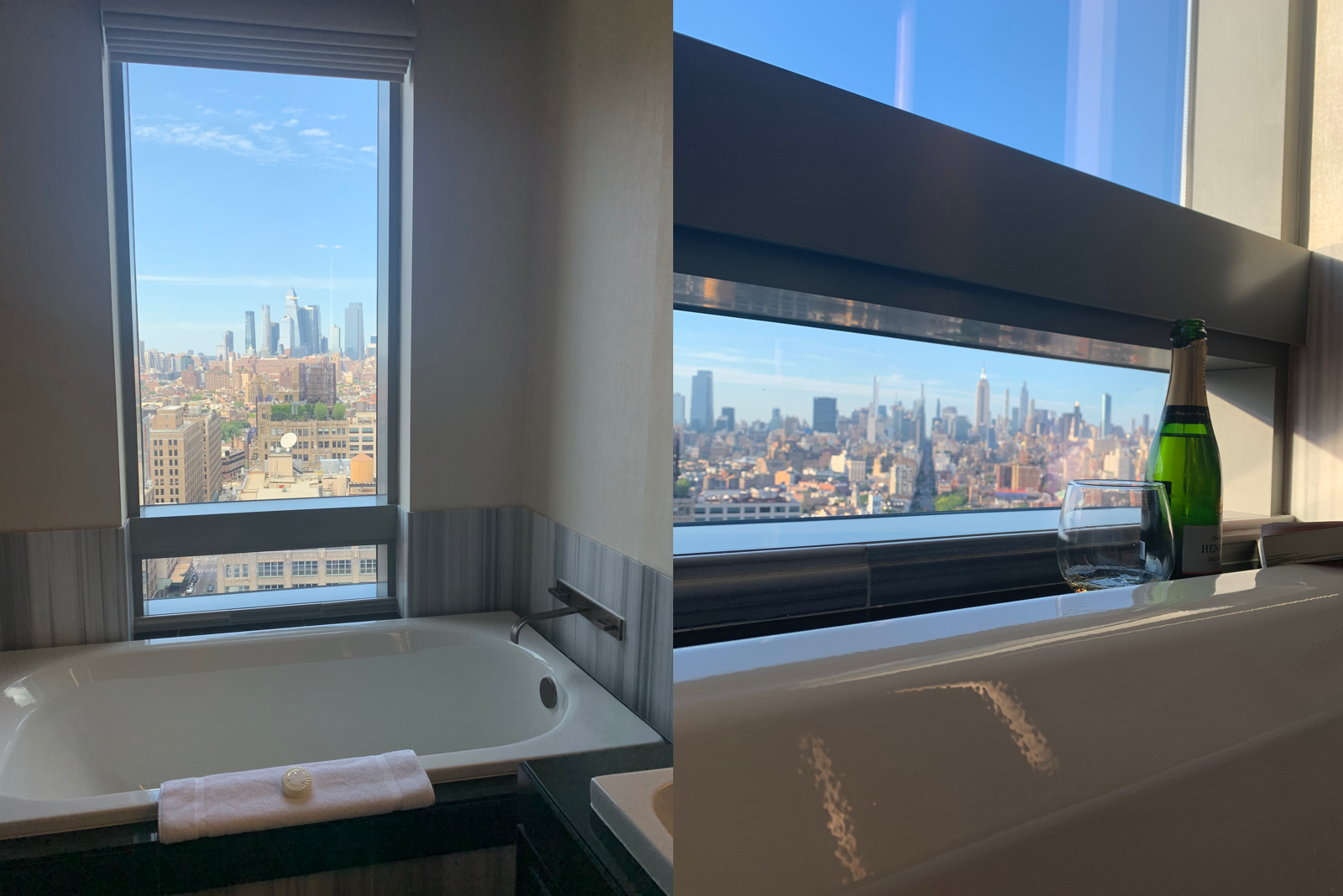 If you plan to spend a lot of time in your room, room service is a must — though be warned that it’s expensive. Room service tends to be hit or miss at hotels, in my experience, but at The Dominick hotel you’ll get decadent bolognese, syrupy banana pancakes, and flakey croissant sandwiches that match the hotel’s opulent personality. 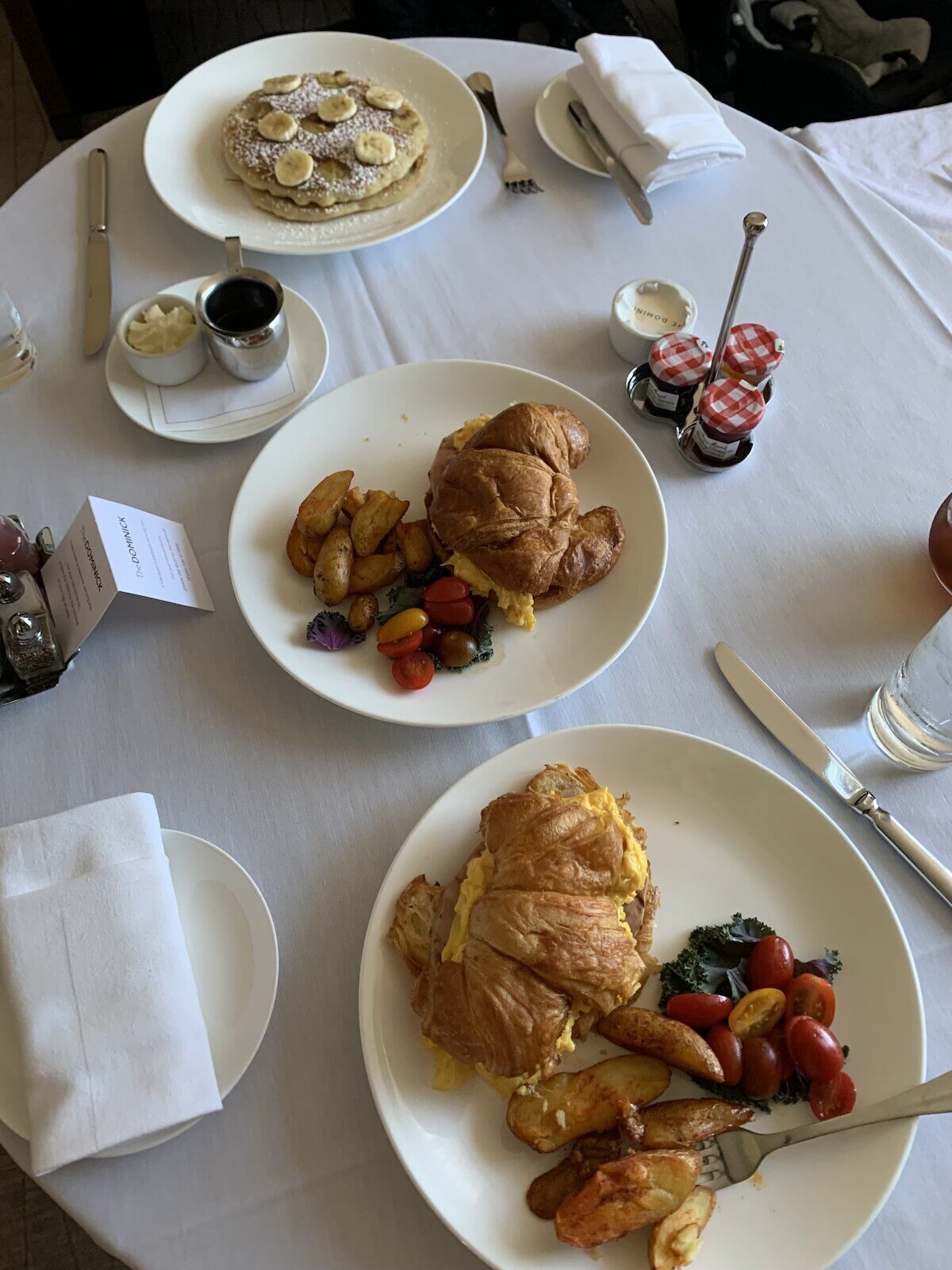 And now for the hotel’s coup de grâce: Terrace on 7, which encompasses the hotel’s heavenly pool deck and restaurant, El Ta’Koy. Loungers are first come first serve for guests, but other than that, the energy on the pool deck is focused on secluded, quiet relaxation. 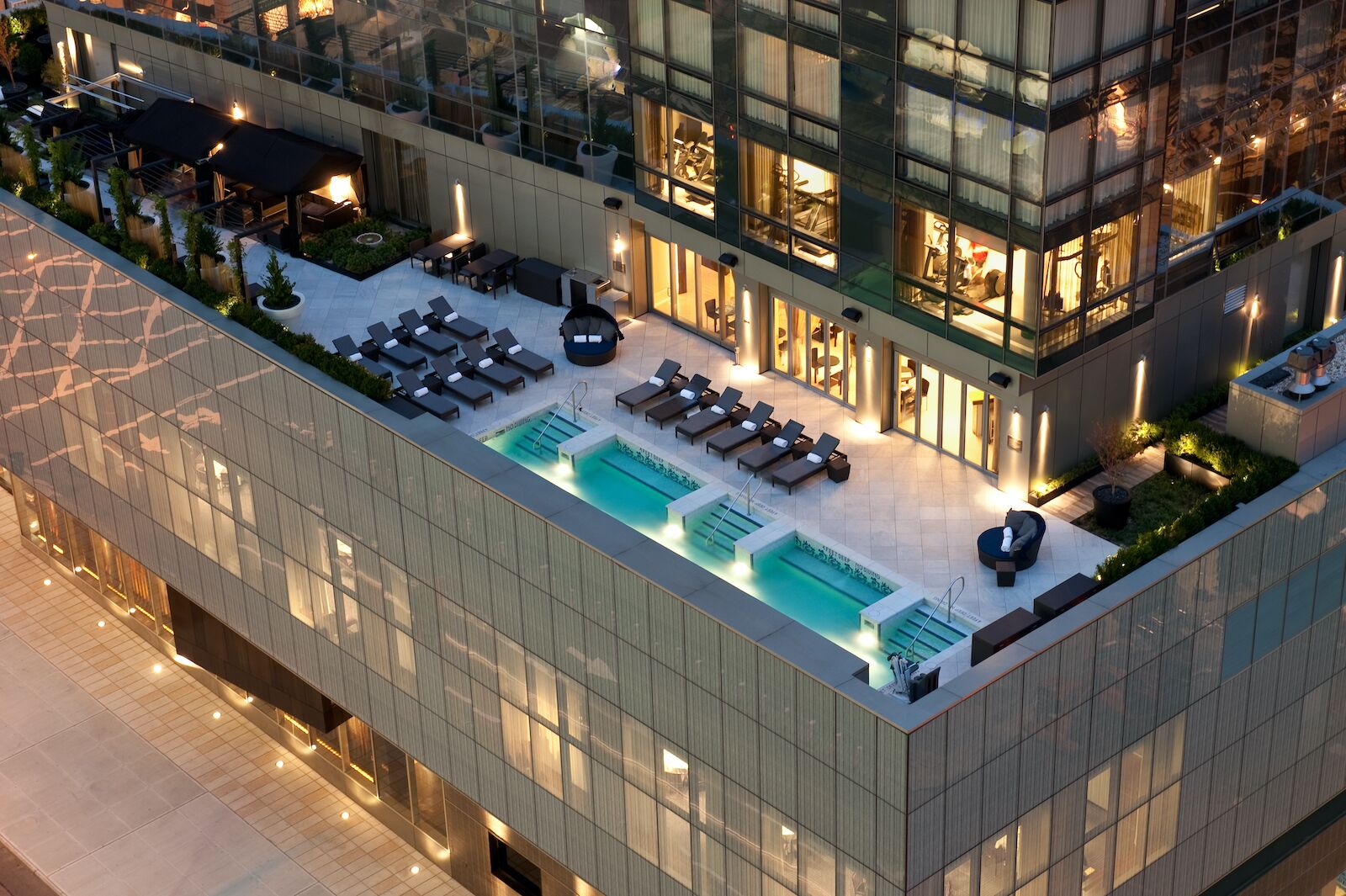 The pool itself isn’t long or wide enough for lap swimmers or anyone else who might want to use it for exercise, so really its purpose is reserved for taking a dip to cool down, or lounge with friends while sipping a drink.

The street view is blocked by a high wall and lush greenery so you’re protected from the noise of traffic and anyone who might want to spy from the sidewalk, giving Terrace on 7 an intimate, even cozy vibe. The watermelon daiquiri and frozen pina colada just add to the overall feeling that at the pool you’re escaping from every stress of city life — here, you’re pampered and getting a little buzzed. It’s great.

There were some older kids splashing around the pool when I was there, but they didn’t disturb the energy, and I brought my daughter to the pool at one point without any awkwardness. However, the vibe on Terrace on 7 is more geared toward adults and day drinking.

Though we did pass a few other kids at the hotel, I wouldn’t necessarily say it’s a very kid-friendly environment — they don’t have cribs on hand for parents, for instance, which is an amenity I’ve encountered at many other luxury hotels. I did feel that this is a place where adults go to get away from responsibilities.

Overall, however, The Dominick is comfortable, luxurious, and quiet. It costs a lot, obviously, but every moment spent there feels like you’re getting your money’s worth. If I’m going to stay somewhere expensive, I want to feel like royalty the whole time I’m there. And at The Dominick hotel, I promise, you will.

Note July 19, 2022: When I booked the hotel through the publicist, I was told the hotel does not provide roll away cribs, so we brought our own. However, at the time of publication, a another publicist for the hotel reached out and indicated that cribs are available on a limited basis.