As a travel editor, packing is a routine part of my life. When you’re constantly on the road, living out of a suitcase becomes the norm and you get used to rearranging and retrofitting your packing setup to make it more efficient. Ironically, the most efficient thing I ever did to my travel setup was to ditch the suitcase entirely in favor of a new backpack, the Tortuga Setout 45L. I acquired my Setout in late 2017, prompted by a summer spent traveling through Asia and a fall in Mexico during which I had a rucksack-style backpackers’ pack that I felt both too old for and, now, too experienced to be carrying around.

What hooked me on the Tortuga Setout is that it wears like a backpack, opens like a clamshell, and packs like a suitcase. I’ll get into the specifics of packing below, but know this for starters – this is the backpack for those who have outgrown the vagabond rucksack days and who want something both more stylish and more functional, but who still abide by the golden principle of long-term and frequent travel: “Thou shalt not roll.” This pack single-handedly prevented me from selling out and getting a roller suitcase. Nearly five years in, I have no plans to change course.

We hope you love the Tortuga Setout backpack! Just so you know, Matador may collect a small commission from the links on this page if you decide to buy anything. Listed prices are accurate as of the time of publication.

The Tortuga Setout comes in men’s and women’s options. My experience is with the men’s version, but I have multiple colleagues and friends who use the women’s version with high regard. 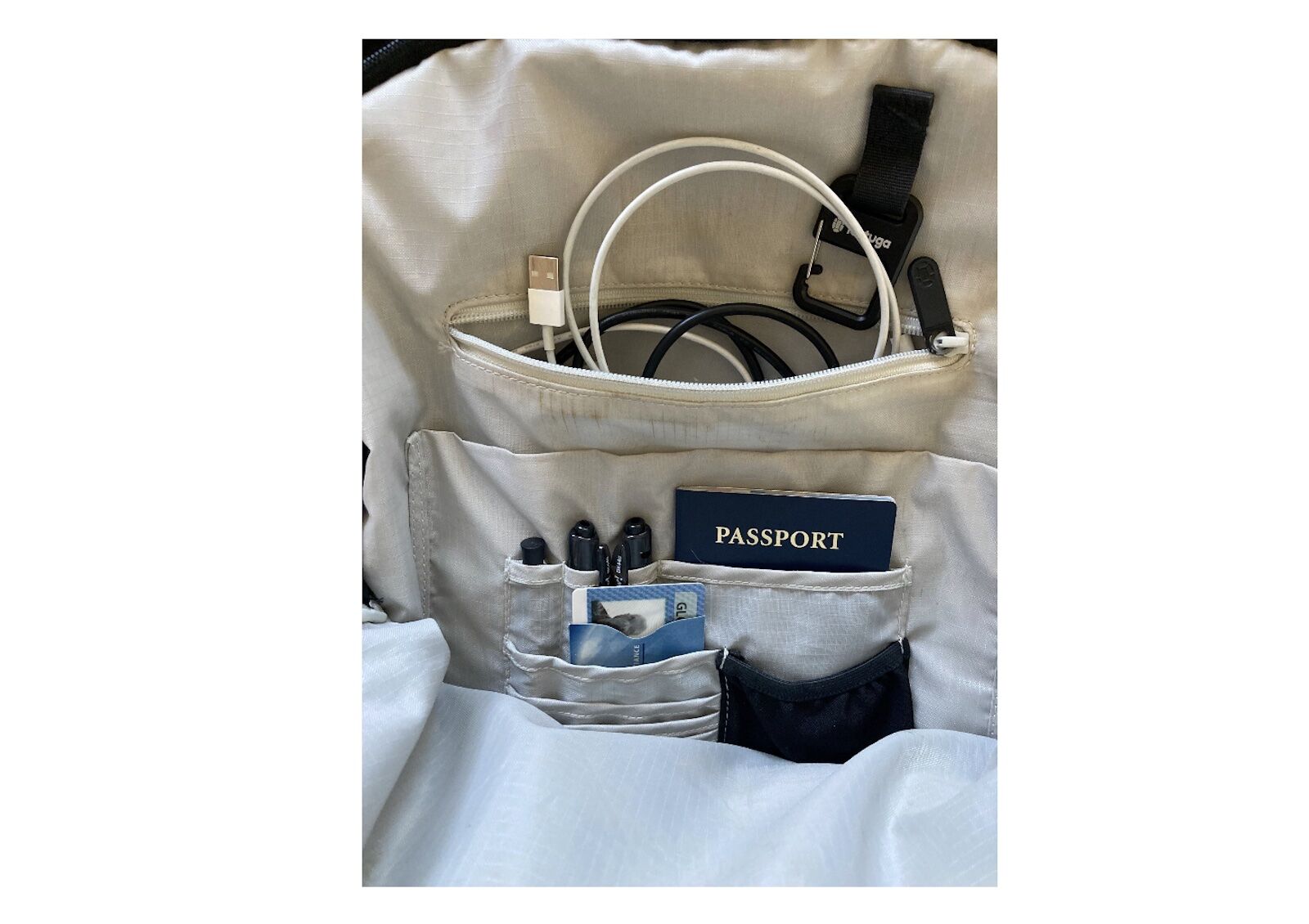 What you don’t see are my biodegradable coffee pods. Photo Credit: Tim Wenger

The Tortuga Setout 45L backpack is 22 inches by 14 inches by 9 inches. That creates 45 liters of space to fill. The pack is big enough that you can fit everything you need even for long trips, as long as you have somewhere to do laundry. I’ve reached a point where whether I’m traveling for three days or 30, I tend to bring about the same amount of stuff, and this pack makes it easy to create a routine out of your packing. I fill it up in the same order each time, and because of the see-thru mesh packing cubes, am able to view what I have already packed and what is still to come.

The Tortuga Setout is made up of three compartments. The main compartment, accessed via a zipper that wraps around three sides of the back, opens like a clamshell. This makes it easy to access anything on the inside, rather than having to dig through stuff you can’t see in a traditional backpacking pack (or worse, having to unpack and repack it all every time you want to change your t-shirt).

The compartment that sits closest to your back when wearing the Setout has a laptop sleeve and room to store accompanying work gear. I travel for work at least once per month, and this pouch allows me to easily be productive while on the road. The front compartment is designed to hold small staples like a passport, notebook, pens, and a book. 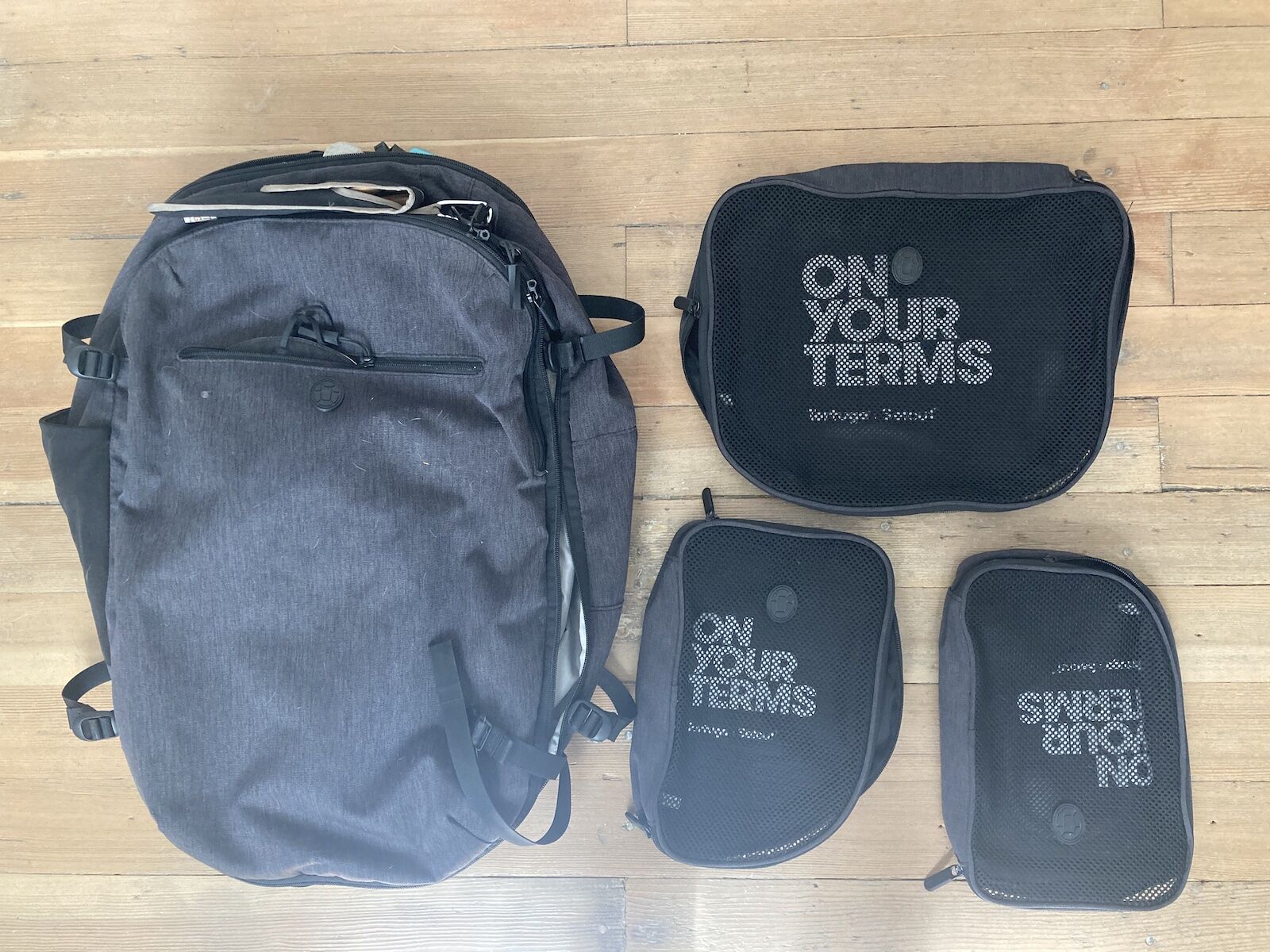 I feel like I’m actually on their terms, but I’m ok with that. Photo credit: Tim Wenger

Unlike a backpacking pack or standard backpack, the Tortuga Setout is designed to accommodate three specialized packing cubes that come with the pack. These fit perfectly into the main compartment when fully packed.

I utilize the three packing cubes to their max. I put pants and shorts in the large one, which can fit three pairs comfortably and four if I stuff it. I use the smaller two for t-shirts, socks, underwear, and any other clothing items. When traveling for work, I typically bring one or two nice button-downs, which I fold and pack into the two zip pockets inside the main compartment. A quick iron at the hotel and they’re good to go. I then arrange the cubes into the main compartment.

Everything else I can pack into my Tortuga Setout 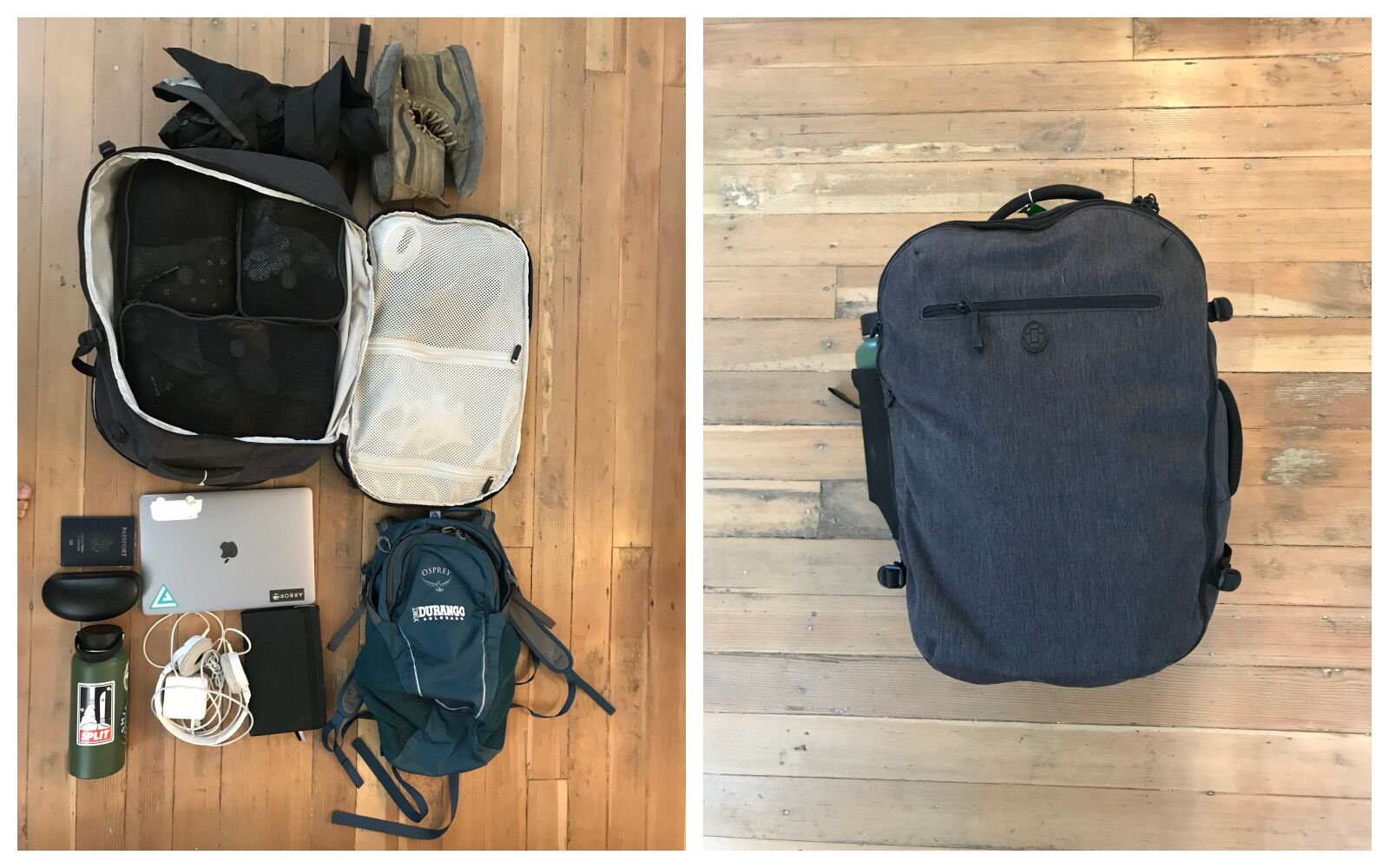 This was my setup for two months in Mexico. Photo credit: Tim Wenger

On top of the cubes, I place a day pack. On top of that, boots or shoes that I’m not wearing on the plane. Around the edges of the main compartment, any small miscellaneous items that are relevant to that specific trip. Another win for the Tortuga Setout backpack is that after five years I’ve never once had an issue zipping it up. No frustrating moments of not being able to zip the last few inches, no broken zippers, no rips. The zippers are perfect, and after 150-plus flights they’re still as functional as the day I bought the pack.

I fill the laptop compartment with my laptop, of course. Also in this compartment I place my charger, noise-canceling headphones, and a notebook.

In the front pouch, I keep a selection of charging and computer cables and a universal charging adapter with me at all times. These go in the zippered pouch, along with some nerdy staples like biodegradable coffee pods for hotel rooms that only have a Keurig. Outside of the zippered pouch, I keep a few pens, my passport and Global Entry id, and other small necessities. Each has a special place in one of the small open pouches.

The Tortuga Setout Divide is a 45L pack, giving you 10L more storage space than the original Setout 35L. Tortuga is a small business that focuses solely on making these packs, so you’re getting quality either way, but I’ve opted for the Setout 45L because it gives me more space while still retaining “guaranteed carry-on” status.

One thing to note about the Setout is that when fully packed, it is definitely on the larger end of carry-on-sized bags. As such, it won’t fit in overhead bins on smaller planes, including those typically used on short-haul regional flights. I do one of two things when I run into this issue: If I’m in a hurry on the other end, I bring the pack onto the plane and weasel it under the seat in front of me. It takes some squishing and pushing, but it always works. When the flight crew does their pre-takeoff rounds, I typically put my feet on top of it to conceal its bulge.

Or, I gate check the bag and pick it up at the baggage carousel at the end of my journey. As an added bonus, this tends to put you in good graces with the gate crew and flight staff because it frees up overhead bin space on the flight.

The only other downside I’ve experienced is that the bottle holder on the side of the pack tends to stretch just a little bit. This can cause your bottle to fall out during a flight, which happened to me once when I’d gate-checked my bag and I never got my Hydroflask bottle back. Granted, I should have taken the bottle with me onto the plane, but forgot to do so that time. I’ve since solved this issue by clipping a small carabiner to the main pack zipper, which clips nicely to the lid on most water bottles.