I‘m a travel writer, and if you know anything about travel writers, you know that we fly a lot. But if you know anything else about the current state of journalism, you probably know that we don’t exactly make the big bucks, so we always fly in economy,  even on 20+ hour flights. Because I’m a frequent flyer, I’ve gotten pretty good at combating most annoyances of flying in economy — I bring an inflatable pad to avoid butt pain, a coffee mug to avoid airplane coffee, and, yes, I’m that person with a dorky foot hammock clipped to my tray table.

But the one problem I hadn’t overcome is finding a way to use the headrest TV screen audio and my noise-cancelling earbuds. I always had to either watch a movie with the free airline headphones (which block so little outside noise that you can hardly hear the movie) or carry an extra cord to plug my headphones into the screen (which inevitable would get pulled out each time I shifted in my seat).

So I was thrilled when I learned about the TwelveSouth AirFly Pro — a tiny, ultralight Bluetooth adapter that plugs into the headrest TV screens. It pairs with all wireless headphones, allowing users to watch airline TV screens with their own personal headphones. 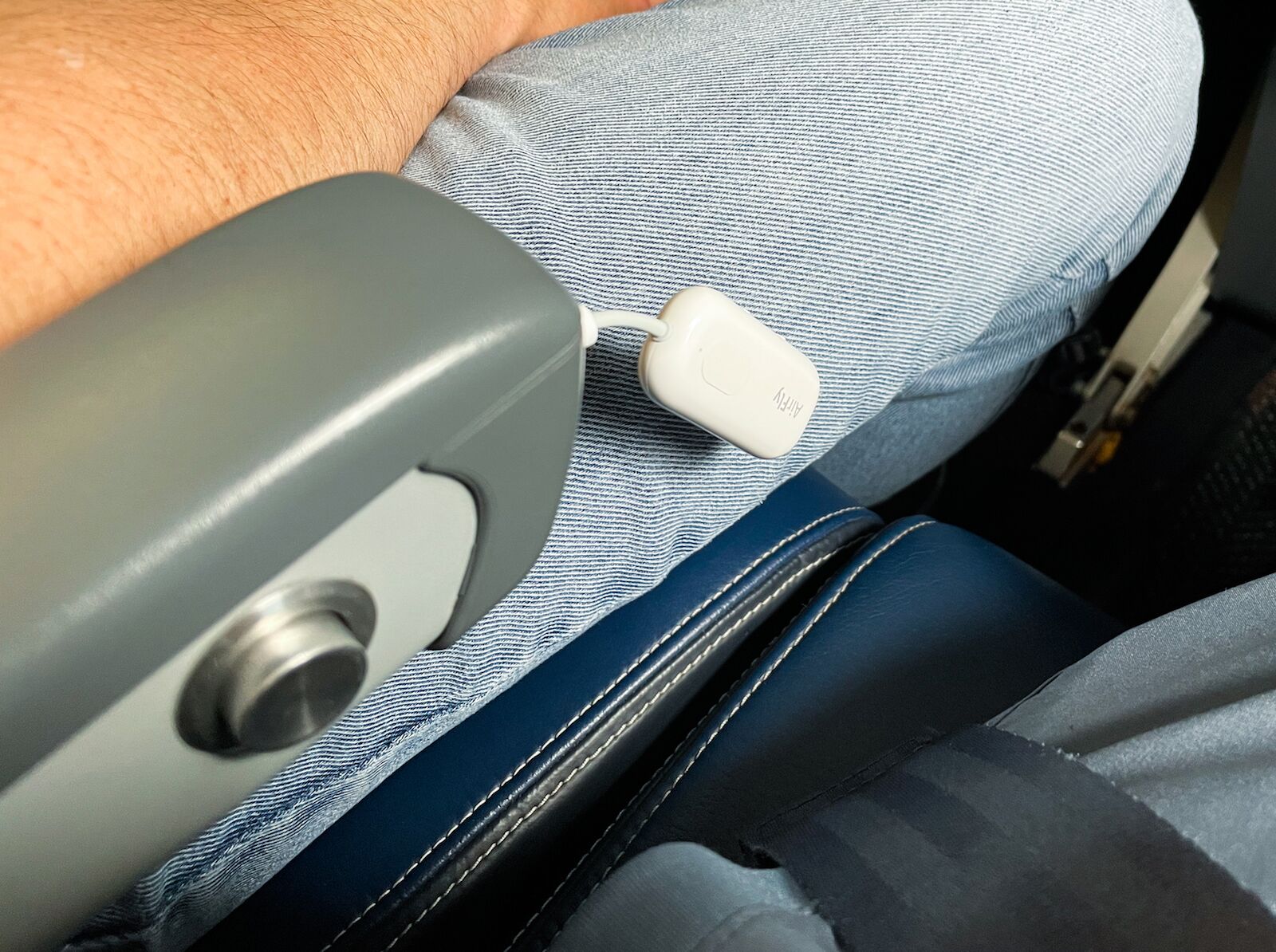 The AirFly Pro works whether it’s plugged into the back of the seat or an armrest port. Photo: Suzie Dundas

I usually try to sleep on planes, and the only way I can ever fall asleep is by blocking out as much noise as possible. But I also like to fall asleep to the sounds of some TV show or movie I’ve seen before, so the AirFly Pro is really a game-changer. It weighs .5 ounces (i.e. nothing) and is two inches long by one inch wide, so it fits in the tiniest of carry-on bags.

We hope you love the Airfly Pro and devices we recommend below. Just so you know, Matador may collect a small commission from the links on this page if you decide to buying anything. Listed prices are accurate as of the time of publication.

The AirFly Pro, in my experience, has fabulous battery life. It has a claimed battery life of 16 hours, and while I’ve never used it straight for that long without recharging it, it’s good to know it can keep you entertained from takeoff in San Francisco to landing in Abu Dhabi. Fortunately, it also charges very quickly. I’ve juiced up the AirFly Pro off my portable charger in about two hours, though plugging it into a wall socket is much faster — I’ve gotten what appears to be close to a full charge after an hour.

I use my AirFly Pro mostly on flights, but it can turn any device with a standard headphone jack into a Bluetooth-capable device. That includes cars without Bluetooth, home speakers, or even a record player. 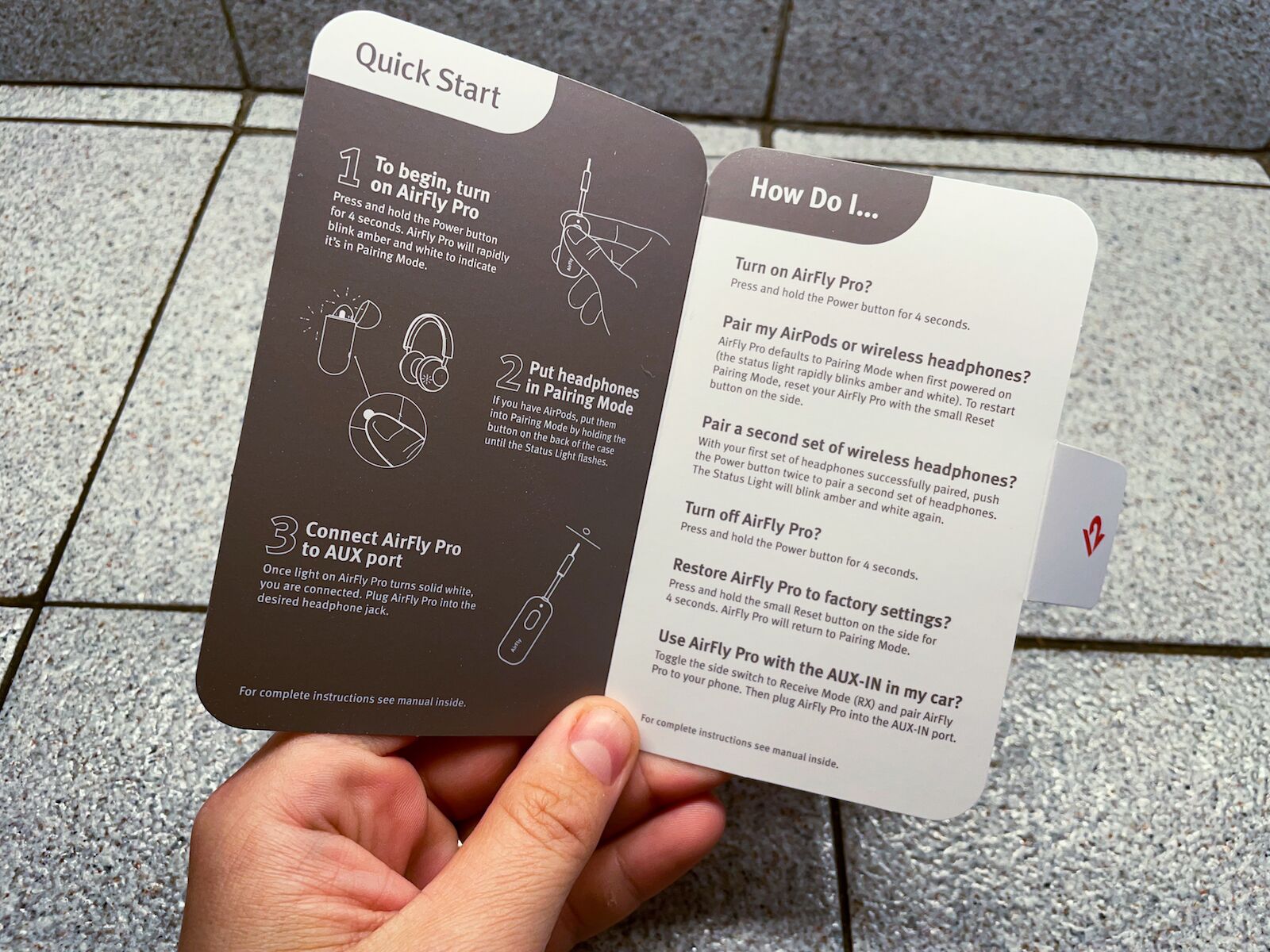 The instructors are short, sweet, and easy to follow. Photo: Suzie Dundas

I’m not exactly someone who “reads directions” when setting up a new device, but since the AirFly Pro has a mere two buttons, it’s easy to pair with just about any device using a “trial and error” process. I paired my Bose earbuds, iPad, and iPhone all in under three minutes. That said, if you read the instructions, pairing moves even faster. The device is so simple and works so smoothly that even the least tech-savvy among us should be able to pair it on the fly (pun intended). 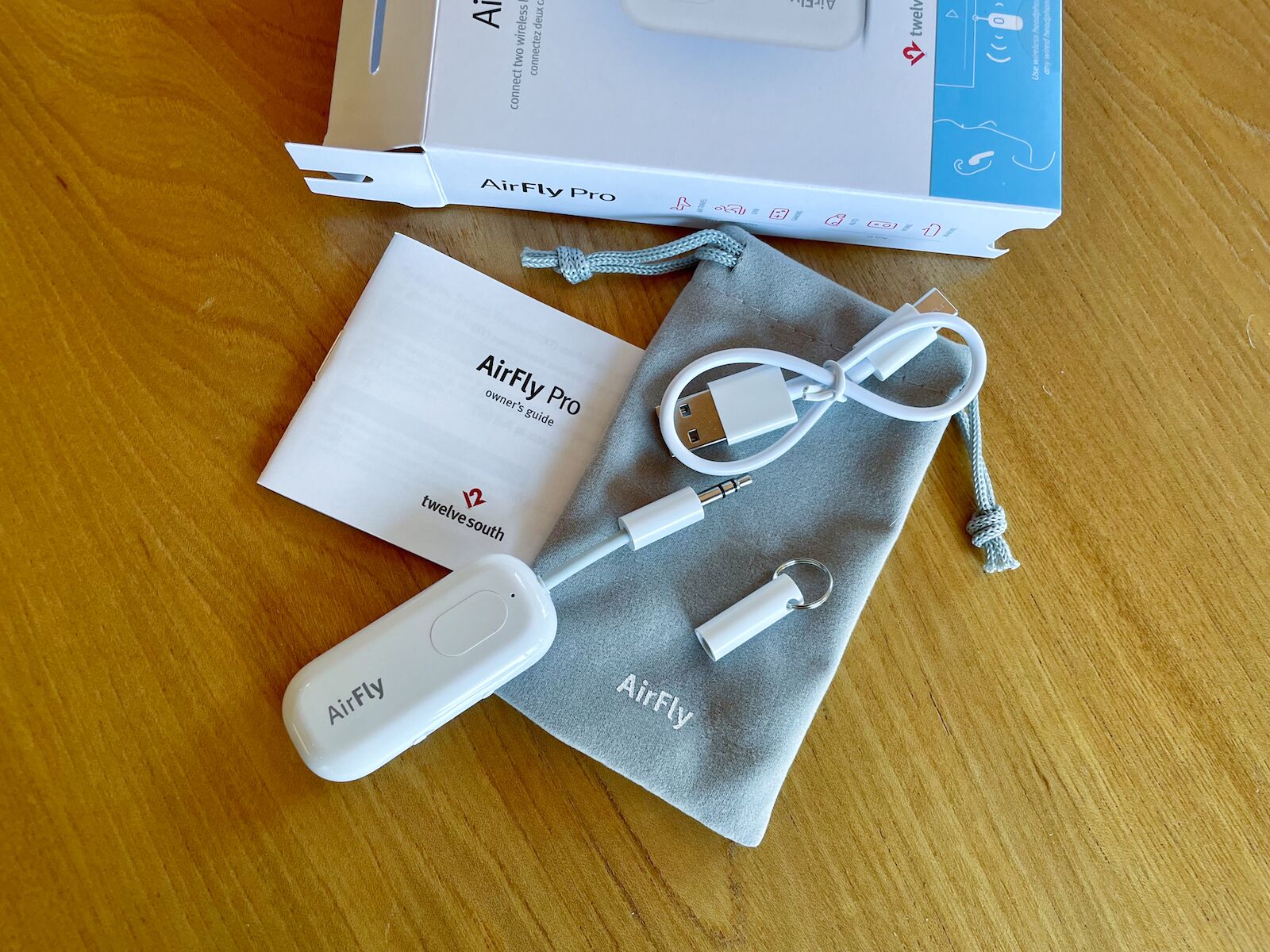 There are actually four different Twelve South AirFly options: AirFly Classic, AirFly Duo, AirFly Pro, and AirFly USB-C. I’d rule out the AirFly Classic for most buyers. While it’s a bit cheaper, the battery is only around eight hours. The AirFly Duo’s main feature is the ability to connect to two headphones (with 20-hour battery life) and the AirFly USB-C is best for users who want to plug it into a USB-C port (like those on MacBooks). But the AirFly Pro is going to be the best option for most buyers, especially given the long battery life and ability to act as a receiver (so you can use the AirFly Pro to send audio to other devices, like in a car). The AirFly Pro also works with two devices at once. 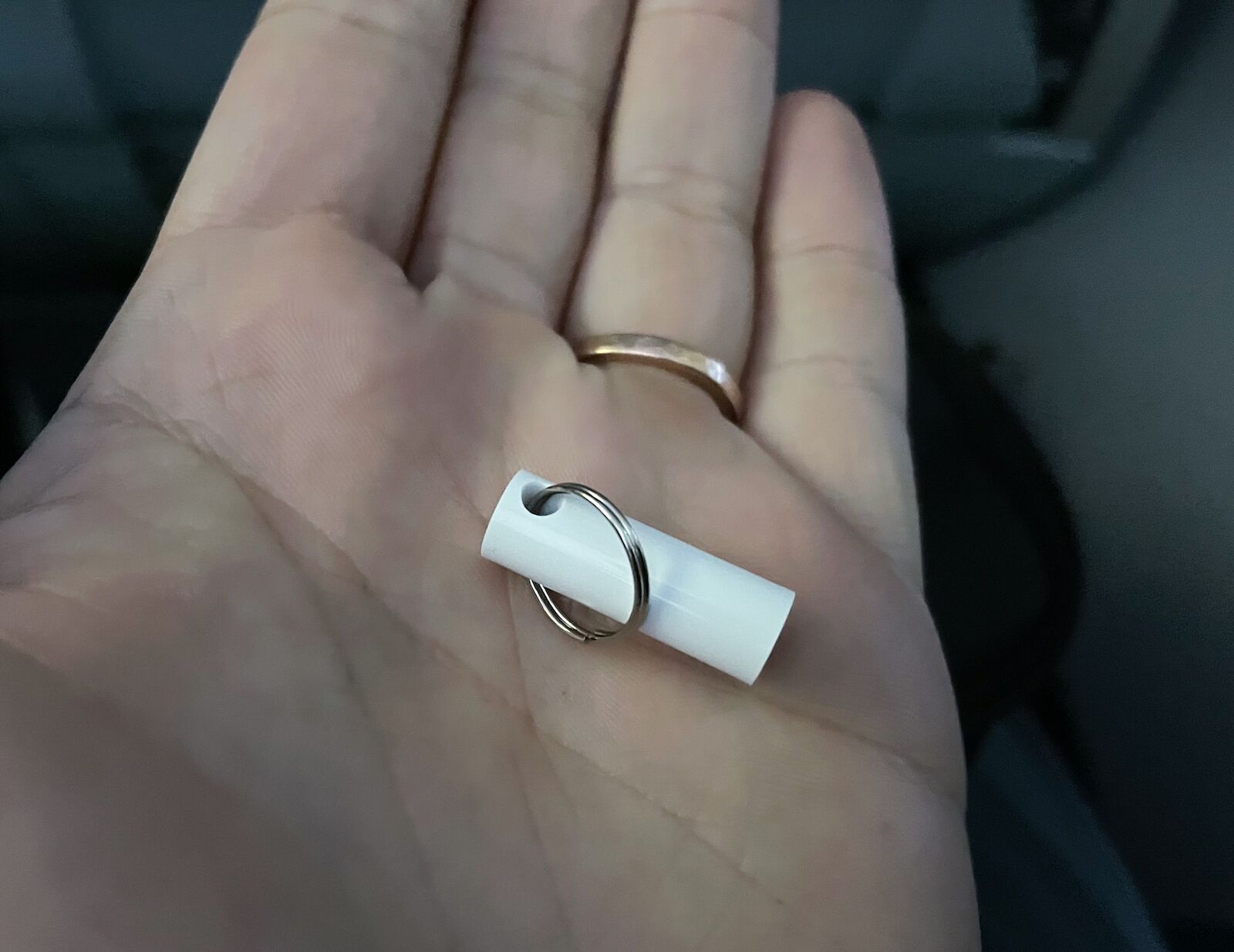 I recommend using the keyring attachment to easily find it in your carry-on backpack. Photo: Suzie Dundas

I’ve encountered only two downsides: the device is quite tiny, which means it can be easy to loose. I recommend using the keychain attachment to clip it to your carry-on backpack‘s keyring (if it has one). And you may need an adapter if you’re flying in an older plane with the two-prong/double audio jack. Otherwise, it may only play sound in one of your earbuds. But see below for a quick adapter recommendation.

My main concern with any adapter product is usually lag, but I haven’t noticed it yet. My guess is it could be an issue in older planes, but I’ve used this on smaller planes that certainly weren’t the newest in the fleet, and so far, so good.

Other AirFly Pro accessories and recommendations 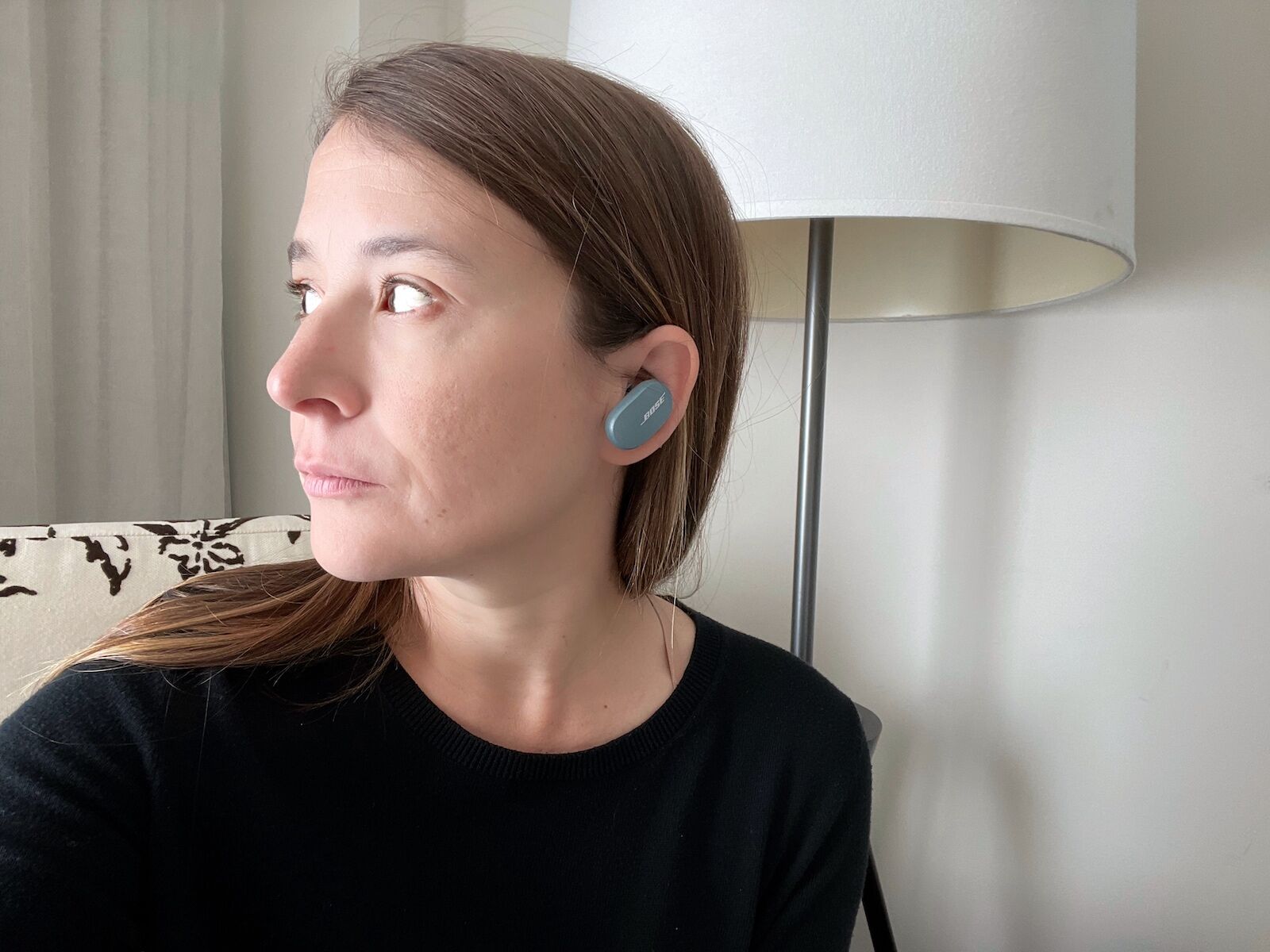 I love traveling light so bulky noise-canceling headphones are a no-go for me. But I’m constantly stunned at the noise-canceling abilities of the Bose. I had no idea earbud technology was so good, especially since I was using my cheap Apple wired headphones before these. Yes, they are really expensive — but they make the difference in being able to sleep or not on a plane and take up less space than a granola bar in my bag.

I recommend buying one of these to keep in the carrying case for the AirFly Pro so you have it when you need it. The Airfly Pro plugs snuggly into these adapters and weighs so little that it won’t pull the adapter out, even if it’s hanging the whole flight.

Technology + GearThe Perfect Backpack for Every Type of Traveler, From Hostelers To Hikers
Tagged
Technology + Gear Travel
What did you think of this story?
Meh
Good
Awesome