Jordan is widely known for its beauty thanks to the ancient city of Petra, the Wadi Rum Desert, and the Dead Sea. What gets less mainstream attention is the country’s rich culinary tradition. Jordan’s central position in the Middle East has long made it a crossroads of culture and a melting pot of food from North Africa, the Middle East, and the Mediterranean. Today, that history has made Jordan one of the most exciting areas for those who love to eat and drink. It is no coincidence that there’s a saying, promoted even by the Embassy of Jordan, that translates to, “Even when you’re full, you can still always eat 40 more bites of food.”

These six dishes, which draw on a variety of influences from the region, are some of the most classic must-tries on any trip to Jordan. 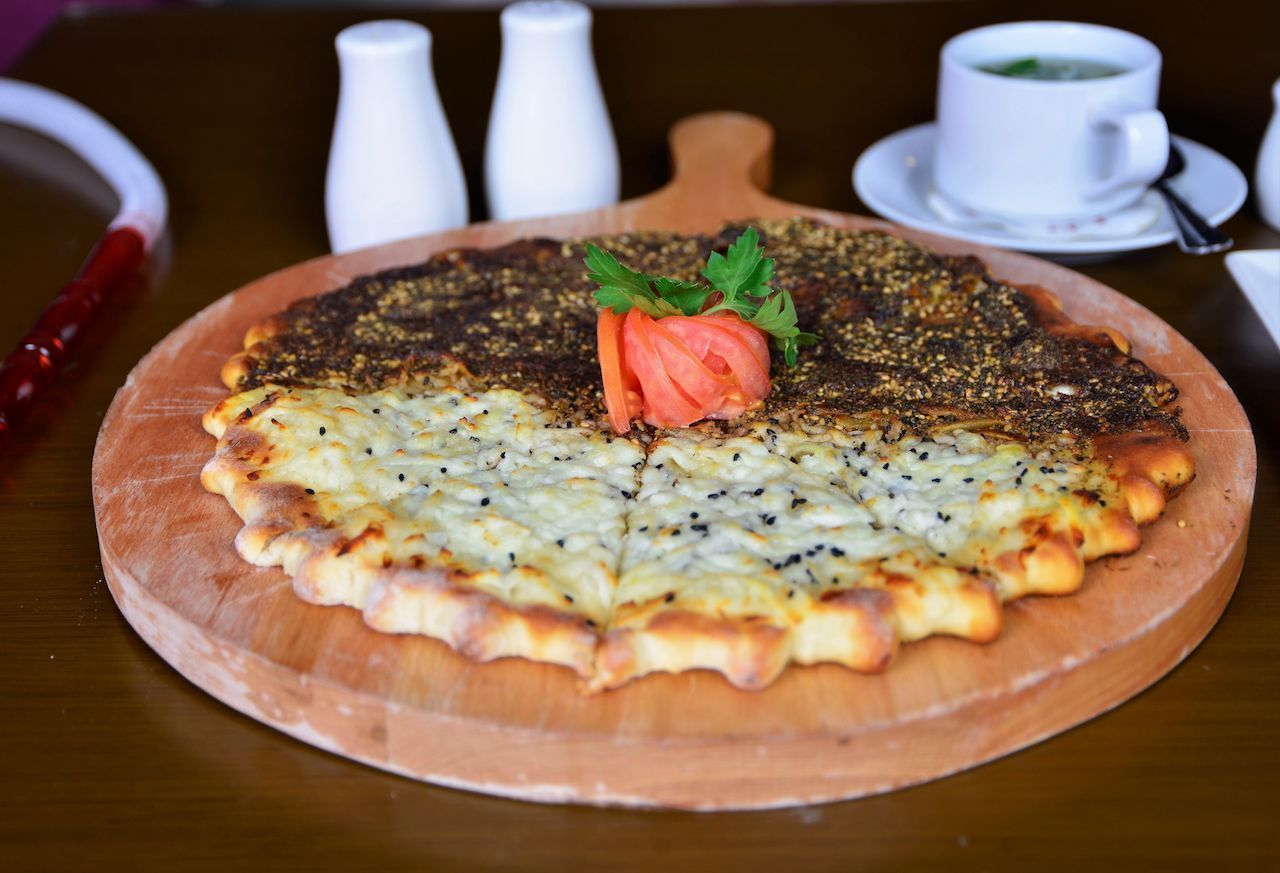 You’re likely familiar with pita bread, which is made with a slightly leavened wheat-flour dough that’s rolled into flat rounds and baked at high temperatures. Jordanian manakish is pita at its best. Typical to Levantine cuisine — which includes Palestine, Lebanon, Jordan, and Syria — the manakish is similar to a pizza but a bit fluffier on the inside and crunchy on the outside. It’s traditionally topped with some combination of za’atar (a spice mixture that often includes thyme, sumac, sesame, and others), cheese, and minced lamb. The origins of this dish are unknown, but flatbreads with toppings have been eaten in North Africa and the Middle East for thousands of years, and it seems only natural that the region’s most popular ingredients found their way as toppings. 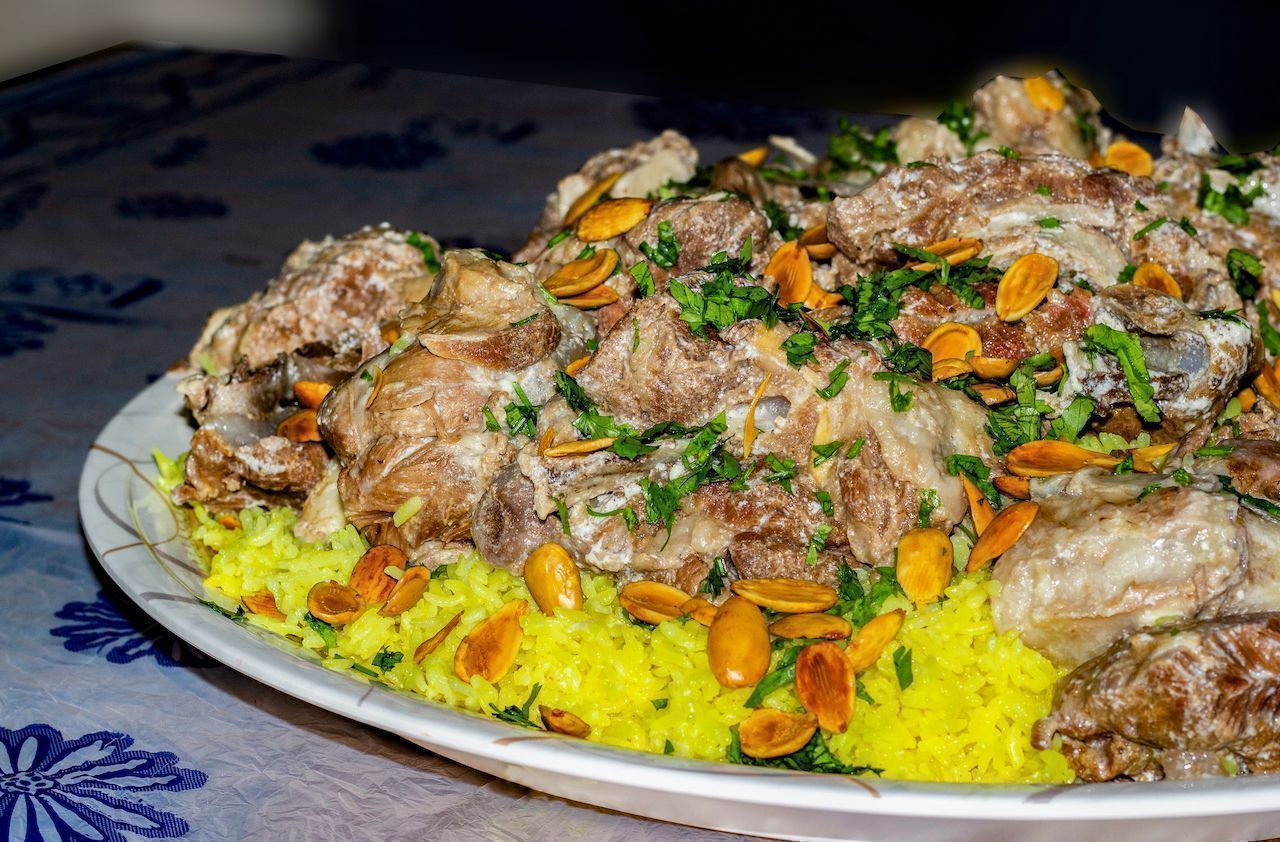 Mansaf is the national dish of Jordan and comes from the Jordanian Bedouins, which are the nomadic Arabic people of Northern Africa, the Arabian Peninsula, and the Levant. The main ingredient in mansaf is lamb cooked in jameed (fermented goat milk yogurt), which is served with rice. The dish is traditionally served to honor a guest or on special occasions such as weddings, births, and graduations. Mansaf has an essential cultural role in Jordanian society. It’s traditionally eaten collectively from a large central platter using only the right hand. The required care and preparation time make mansaf the heart of the Jordanian cuisine. 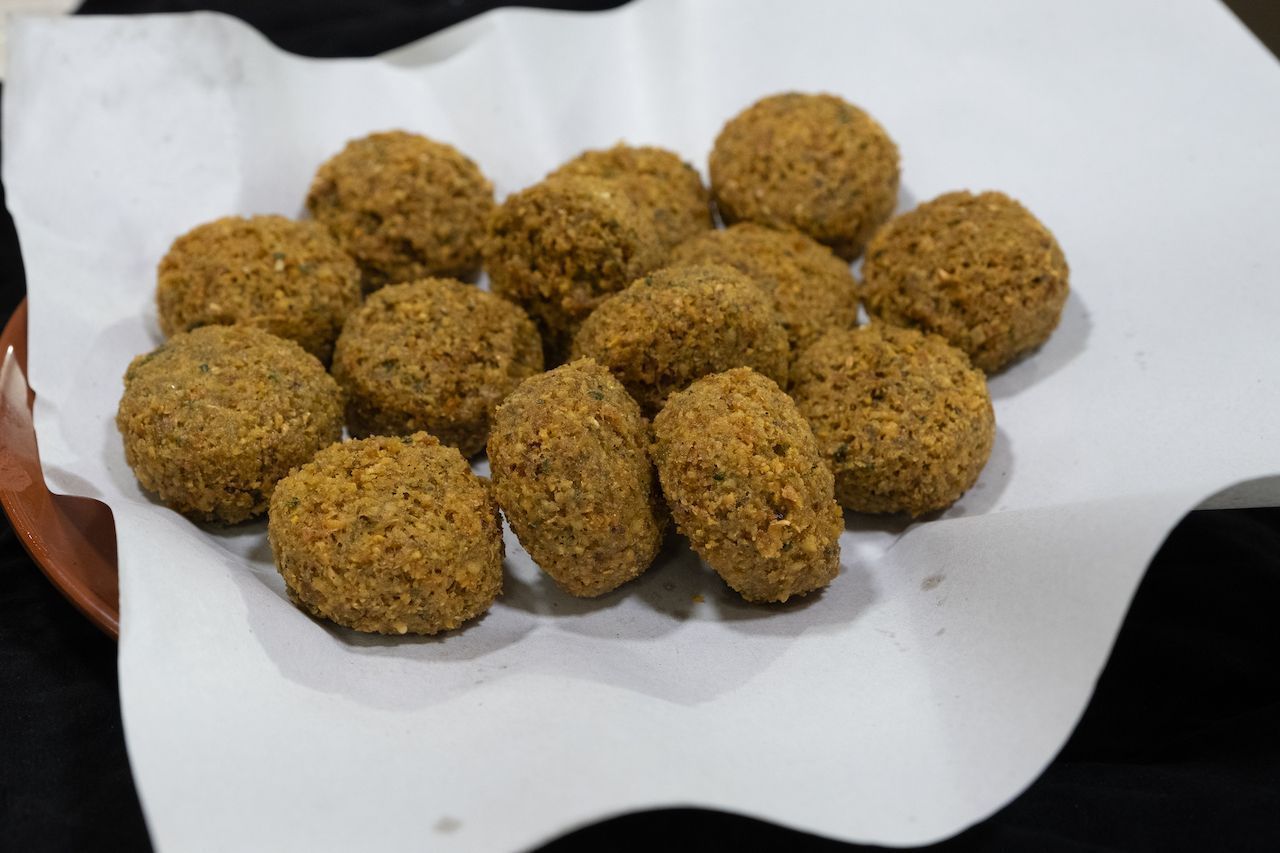 Falafel is, without doubt, the archetypical Middle Eastern dish. It’s a delicious, never greasy, deep-fried chickpea ball that’s flavored with a variety of spices (mostly cumin, garlic, and parsley) and eaten as street food or as a side dish. Despite being a common dish throughout Jordan, it’s not originally from the country. Falafel’s origin is disputed, but it’s believed to originally come from Egypt. With Jordan being so close to Egypt (Aqaba, in the south of Jordan, has always been a significant stopping point for Egyptian pilgrims traveling to and from Mecca), the falafel has found a second home with the Jordanian people. It’s one of the most delicious things you can eat in the country to this day. 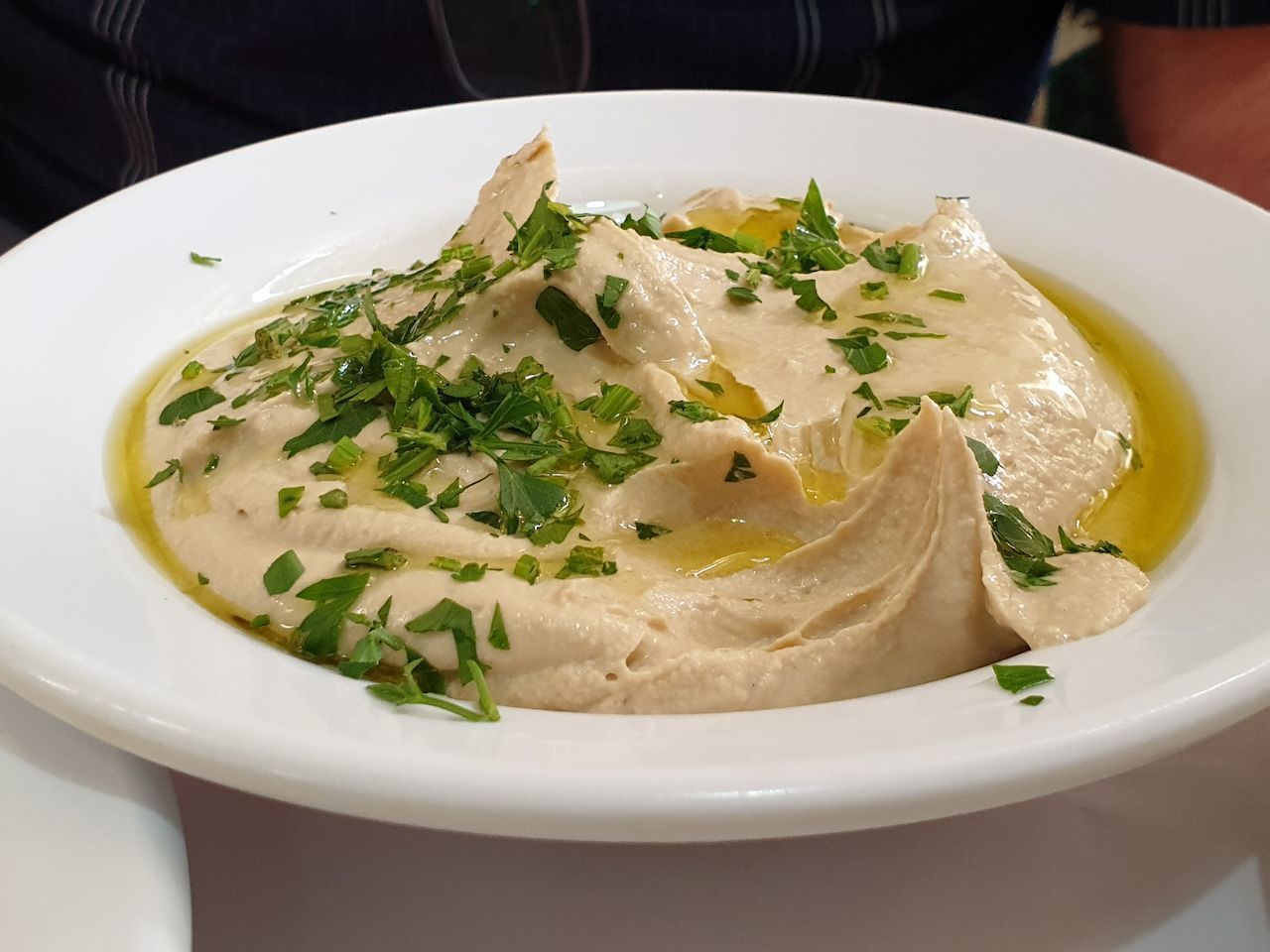 Hummus, also known by its full name hummus b’tahini, is a creamy dip or spread made with chickpeas, tahini, garlic, and lemon. Like falafel, hummus is popular throughout the Middle East, though the true origin is unclear and likely long lost to history. Still, it’s safe to say that hummus is a staple in Jordan. It’s eaten for breakfast, lunch, and dinner, and is best enjoyed with fresh pita. 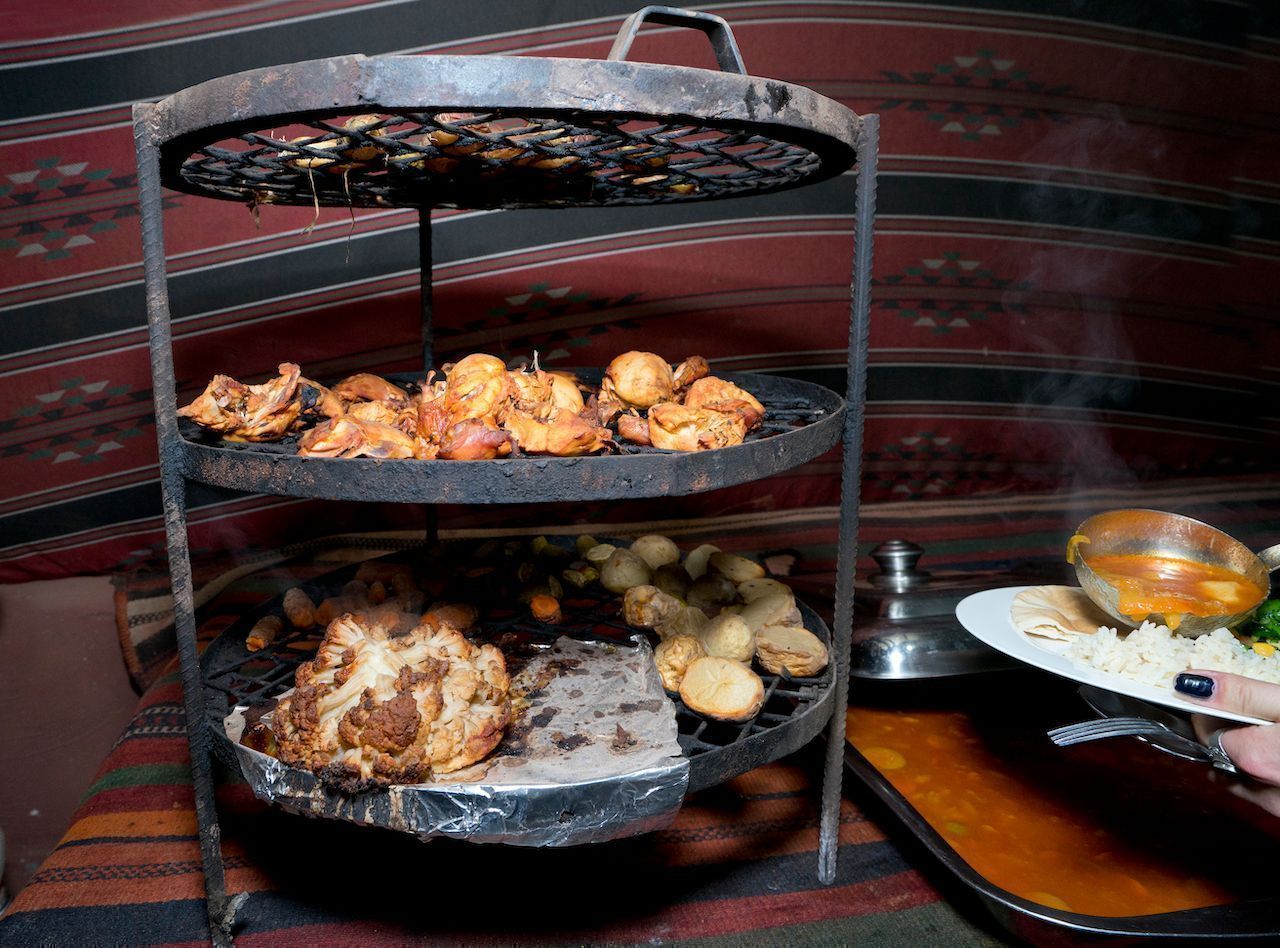 Zarb is similar to Western barbecue. It’s the Bedouin way of cooking meat and chicken, and it deserves recognition for the cooking method alone, which is done in underground earthen ovens. The meat (chicken, goat, or sheep) is cut into small pieces and marinated in water, lemon juice, garlic, salt, and pepper. Vegetables (like potato, carrot, and onion) are also cut into pieces. Both the meat and the plants are then placed in a big underground pit and buried beneath the desert sand. The hole is covered with a few layers of blankets to hold in the heat. When the food is ready, it’s removed from the sand and served with rice on a communal tray that’s designed for sharing. 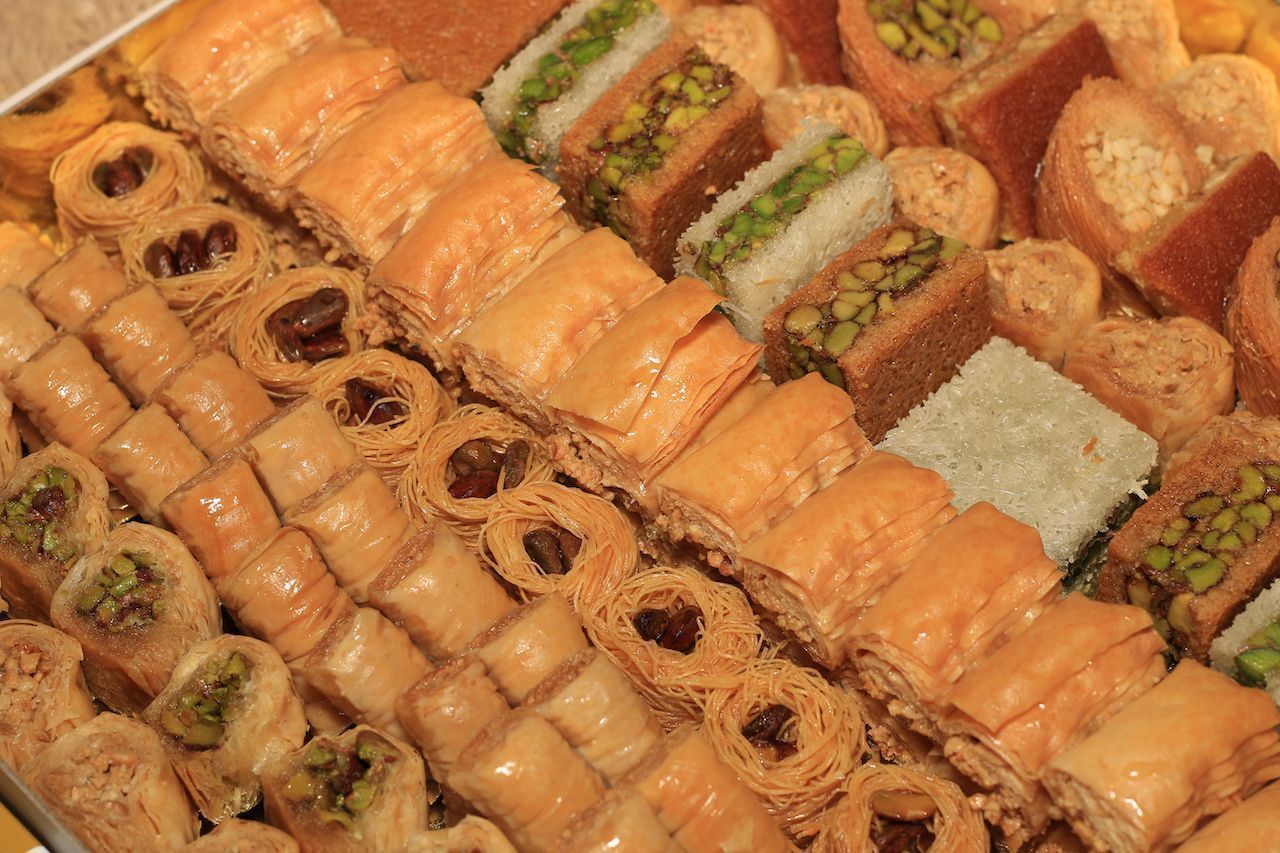 Baklawa, the Jordanian way to say baklava, is a sweet and flaky layered pastry that’s filled with pistachios or other nuts and sugar or honey syrup. It’s not a set uniform dish and comes in several varieties and shapes. The story of baklawa began long ago, and many countries claim baklawa as their own and prepare it in their own ways. In Jordan, baklawa is similar to the Lebanese style, and it’s cut into a variety of triangular, rectangular, diamond, or square shapes. Rosewater and orange blossom water can be added, but the crucial ingredient is the nuts, which are the star of every type of Jordanian baklawa.

CultureHow To Make Tea the Berber Way
Tagged
Food + Drink Jordan
What did you think of this story?
Meh
Good
Awesome

Upgrade Your Camping Experience With This Luxury Camp in Jordan