Fermentation is an ancient culinary technique used around the world. It was originally developed to preserve food during harsh winters and food shortages before the time of refrigeration. Vikings traversing the oceans on long voyages needed a supply of edible fish so they didn’t starve while at sea, so they invented lutefisk. Too dangerous to fish on the ice in the winter? The Inuit people have an answer: Stuff a seal carcass with birds and bury it underground until it ferments. And if you’re a Chinese laborer worried your cabbage is going to go bad, you might ferment it in rice wine, inventing what we now know as sauerkraut.

A way to preserve food is just one side of the fermentation story, though. Flavor is the other. Fermentation has been applied to fish and beans to create pungent, umami-rich pastes that add complexity to soups and stews, as well as condiments for vegetables, tofu, and rice. The fermentation process adds a depth of flavor to ingredients like ogiri and miso, both foundational to numerous cuisines in Asia and Africa.

Fermented foods might be pungent, tangy, sour, and salty, but many of them also recall the history of the cultures from which each one originates. Whether illuminating the warrior mindset of the Vikings or the diet of the people who built the Great Wall of China, fermented foods are an essential part of culinary history. Here are the 10 fermented foods you need to know about.

This spicy bean paste is one of the central ingredients in the Sichuan cuisine of southwestern China. Doubanjiang is made with broad beans, rather than soybeans, and is used to season dishes like mapo tofu, a notoriously spicy dish that uses Sichuan peppercorns as another main ingredient. Doubanjiang is pungent and earthy in flavor, thanks to the long fermentation process behind it, while the heat from the spice balances out some of its formidable saltiness. That hit of umami from doubanjiang gives Sichuan Chinese cuisine its signature depth and complexity.

Lutefisk was likely first consumed by Vikings in what is now Norway. Today, it’s rarely consumed in the country, but it’s a delicacy among Scandinavian-Americans in Minnesota and Wisconsin. Lutefisk is notorious for its pungent aroma. It’s made by taking codfish that has been dried to the point of resembling cardboard more than fish and rehydrating it with lye — a chemical typically used to unclog your bathtub drain.

By the time it’s been rinsed off and shipped away to be eaten by the proud Scandinavian peoples of North America, the texture becomes “slippery and a little squishy,” according to Smithsonian magazine. Today, lutefisk is typically eaten at church-hosted dinners on Christmas.

There are several legends surrounding the provenance of lutefisk, including that Irish fishermen tried to poison Viking hoards by adding lye to their fish stocks (not true) or that after the wooden racks where the Vikings dried their fish burned down, they rediscovered rehydrated fish in puddles of rainwater covered in ash. The first recorded mention of lutefisk didn’t pop up until 1555 when a writer recommended that it be served loaded with butter on top.

Food blogger Flo Chinyere calls ogiri “the most pungent Nigerian food ingredient ever.” Particularly foundational to the cuisine of the Igbo people, ogiri is traditionally made from castor seeds, which are poisonous unless fermented. However, ogiri can also be made from egusi seeds, which are boiled until they become soft, wrapped in banana leaves, and then left to ferment for at least five days. Once fermentation is complete, the seeds are mashed into a charcoal gray paste. The resulting paste is then used to flavor soups like ora soup (made with Scotch bonnet peppers and goat) and onugbu, or bitterleaf, soup. 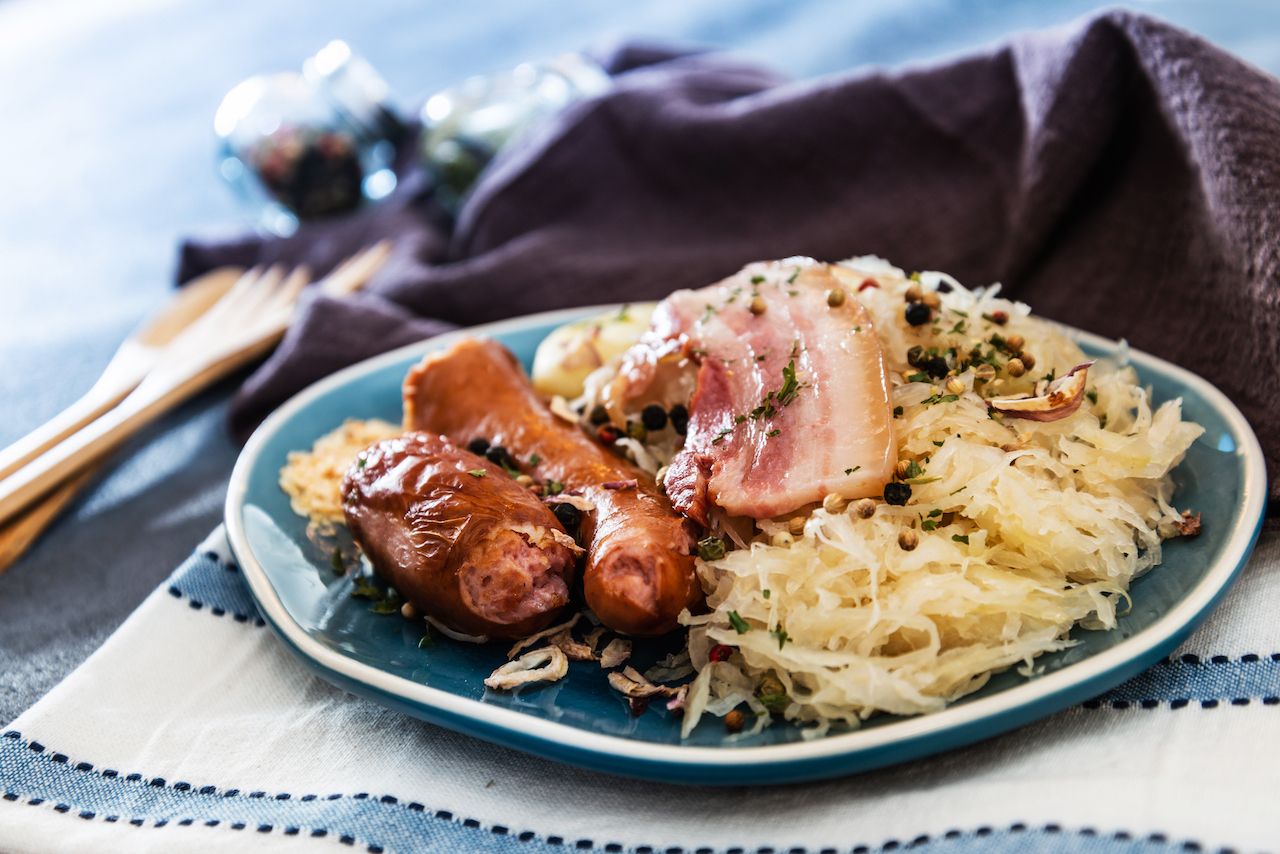 This sour, fermented cabbage might be most familiar as a topping for hotdogs, but it’s got a long history — and that history doesn’t start in Germany. Sauerkraut originated in China 2,000 years ago, when workers building the Great Wall of China sustained themselves mostly on cabbage and rice. According to the New York Times, the workers added rice wine to the cabbage in winter, which fermented and preserved it.

Though we now think of sauerkraut as a thoroughly German snack, it didn’t land on their shores until the 1600s. It was likely brought to Europe by the Tartars, a group of people of primarily Russian and Turkish ancestry who were united under the empire of Ghenghis Khan.

Today, the pungent veggie is fermented with salt, and it’s considered a healthy source of fiber and Vitamin C. German people love to pair it with sausage, but creative cooks have added sauerkraut to everything from tacos to burgers, and even chocolate cake.

There are two different types of this fermented condiment from the Philippines: bagoóng alamang, which is made from shrimp or krill, and bagoóng na isda, made from fish (often anchovies or sardines). Bagoóng is traditionally fermented with sea salt inside large clay pots called tapayan. Bagoóng gets its signature deep red color from fermented red yeast rice. Though the ingredients are simple, bagoóng’s complex flavor is derived from the waters where the fish or shrimp are harvested. However, the preparation of bagoóng varies from region to region. For instance, in Visayas, a version called ginamos is sometimes made by crushing the ingredients together in a tub by foot.

Soups and stews like dinengdeng and pinakbet are seasoned with bagoóng, and it’s also a common dip for tart fruit like unripe green mango and kamias. 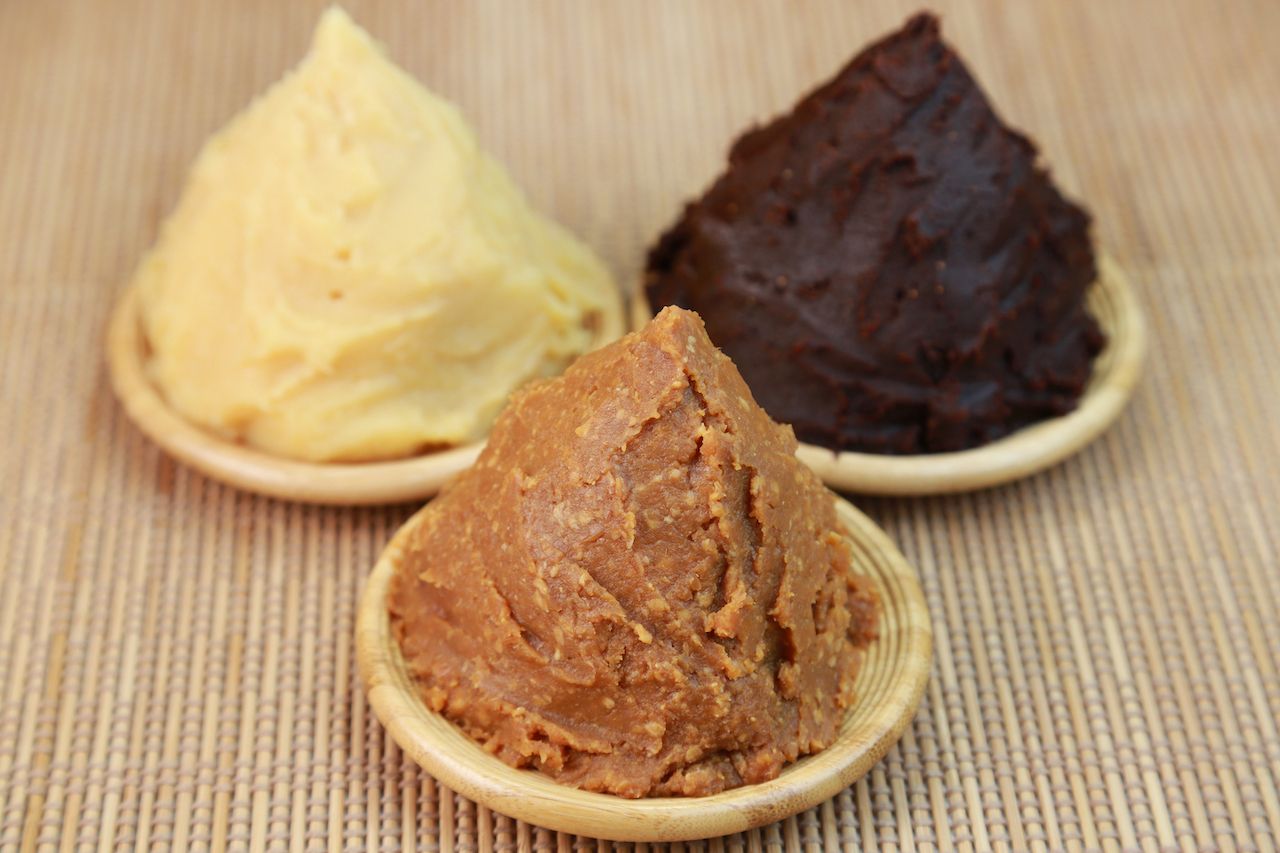 Miso paste is magical. The formula for making it is deceptively simple. Soybeans and salt are inoculated with koji, the same mold used to make sake and some types of soy sauce, and are then left to ferment anywhere from many months to many years. The longer the fermentation, the darker in color and richer in flavor the miso paste becomes. White miso has a milder flavor while red miso is saltier.

A dollop of miso adds umami, that ideal characteristic in Japanese cooking, to soup and ramen, but also many other dishes like eggplant, tofu, and daikon-glazed miso (miso dengaku), as well as saba misoni (fish stewed in miso).

There are many different types of miso that are often regionally specific: Sikyo miso, for instance, originated in Kyoto. This sweet miso paste is often used to glaze fish or as seasoning for grilled meat. In Wakayama, Kinzanji-miso is a common topping for steamed rice and tofu, or is used as a dip for vegetables.

Natto is another fermented dish popular throughout Japan, where it’s often served with a fried egg for breakfast. Steamed soybeans are sprinkled with Bacillus subtilis and are then allowed to ferment for one day until they take on a sticky, slimy texture.

This Inuit dish from Greenland is essential to weathering long, harsh winters: Kiviak consists of up to 500 auk birds (small seagulls) preserved inside the freshly disemboweled body of a seal. Once the pelt of the seal has been filled with said birds, it’s buried under a large stone, which prevents the pelt from bursting due to a build-up of gas. The pelt ferments for six months, after which point it is dug up and the fermented birds are eaten raw. Food shortages and treacherous hunting conditions for the Inuit people of Greenland often require creative ways to maintain sustenance until it’s safe to venture outside for fresh food.

Hákarl is another funky dish to emerge from Greeland’s merciless climate. Sleeper shark is dried and cured until it becomes rich in ammonia. 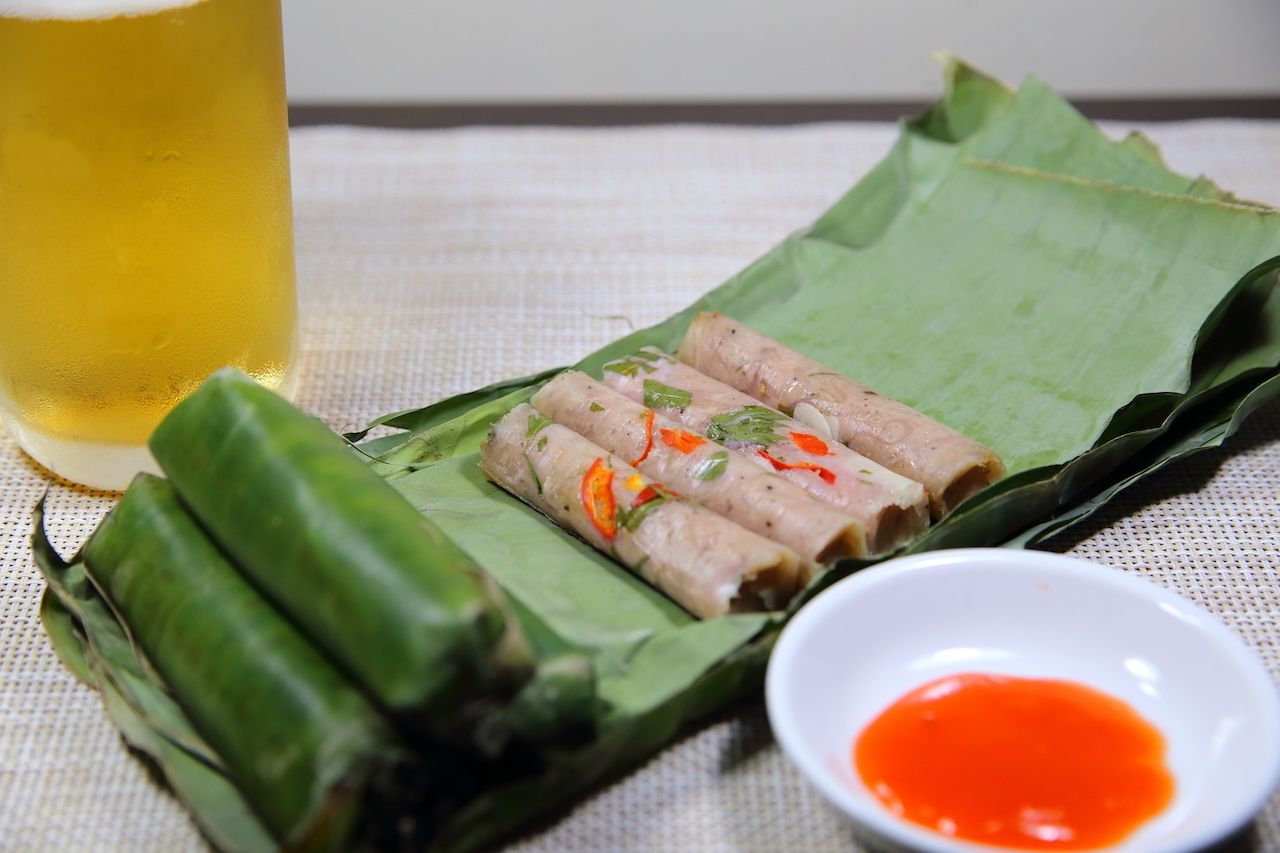 This cured and fermented pork or beef roll comes from Vietnam. The traditional ingredients are minced pork and shredded pork skin, but some modern versions are made with shredded beef. Garlic, peppercorns, and Thai chili give nem chau its characteristic flavor: salty and sour with an added twist of fiery spiciness. The mixture of meat and seasoning is then wrapped in banana leaves, where it’s left to ferment for several days before it’s eaten straight from the leaf or grilled. Nem chua is a popular snack all year around, but it’s often served as an appetizer on Tet, or Vietnamese Lunar New Year.

A staple starch for the indigenous people of Hawaii, this sour purple mash is made from taro root. First, the taro root is steamed or baked in an underground oven called an imu. Then the softened plant is cleaned and mashed on a wooden board called a papa ku‘i ‘ai using a pestle called the pōhaku ku‘i ‘ai. The mashed taro is called pa‘i ‘ai. Water is added until it takes on a thick, creamy, pudding-like texture, which is when it becomes poi. Fresh poi has a sweet, delicate flavor, but once it’s left to ferment over several days it becomes sour.

Typically, poi is served the same way as rice: as a side dish accompanying meat and vegetables. Poi is a staple alongside kalua pig, and lomi lomi, or salted, salmon. 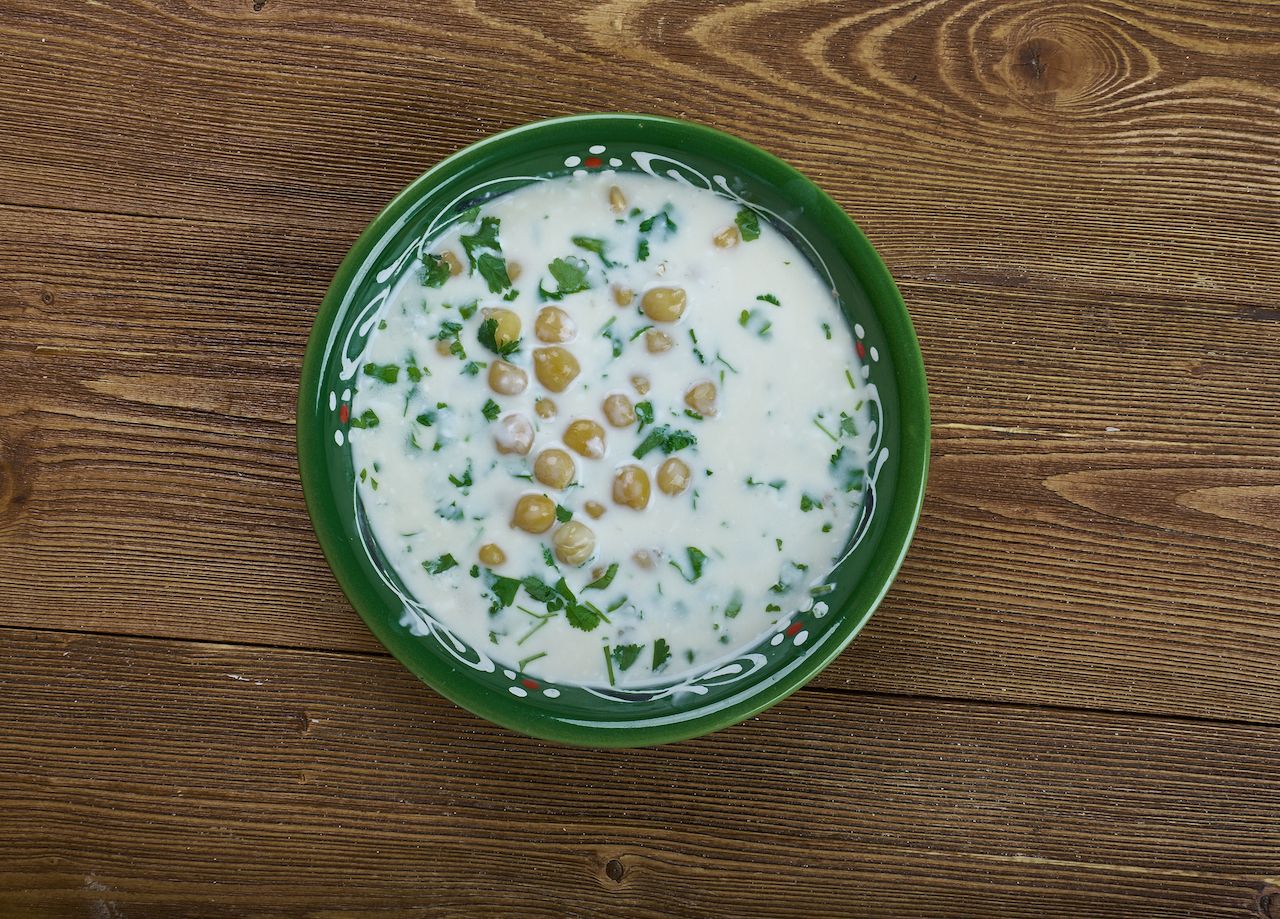 Technically a beverage, this fizzy Iranian drink is made from yogurt combined with carbonated water. Doogh is both salty and mouth-puckeringly sour, and it’s considered a refreshing summertime drink. Served on hot days and after meals, doogh is a satisfying way to cool off that’s akin to an Indian lassi.

Ash-e doogh is the soup version, served either hot or cold in Iran, as well as Azerbaijan and Turkey, where it’s garnished with coriander, leek, tarragon, mint, and parsley. Chickpeas or lamb meatballs give this sour yogurt soup substance.

Food + Drink12 Pickled, Cured, and Fermented Foods From Around the World
Tagged
Food + Drink
What did you think of this story?
Meh
Good
Awesome