It’s easy to take refrigeration for granted. But far before these nifty gadgets arrived in our kitchens, humans had to be a little more creative when it came to keeping their food edible for longer. Averse to wasting nutrient-rich ingredients, our ancestors turned to pickling, fermenting, drying, and curing our food to avoid starvation — and many dishes created using these techniques remain centerpieces of cuisines across the globe today. Korean people have been pickling cabbage to make kimchi for 4,000 years. The Vikings dried cod on wooden racks to make sure they had meals on hand for long ocean voyages. The ancient Romans sold meat cured with salt in markets as early as the second century BCE. And those are just the dishes you’ve probably tried yourself, or at least heard about before.

Countries throughout Asia, West Africa, the Meditteranean, the Middle East, Europe, and Scandinavia are still preserving foods using ancient techniques. Here are 12 fermented, dried, pickled, and cured dishes you may not have tasted. 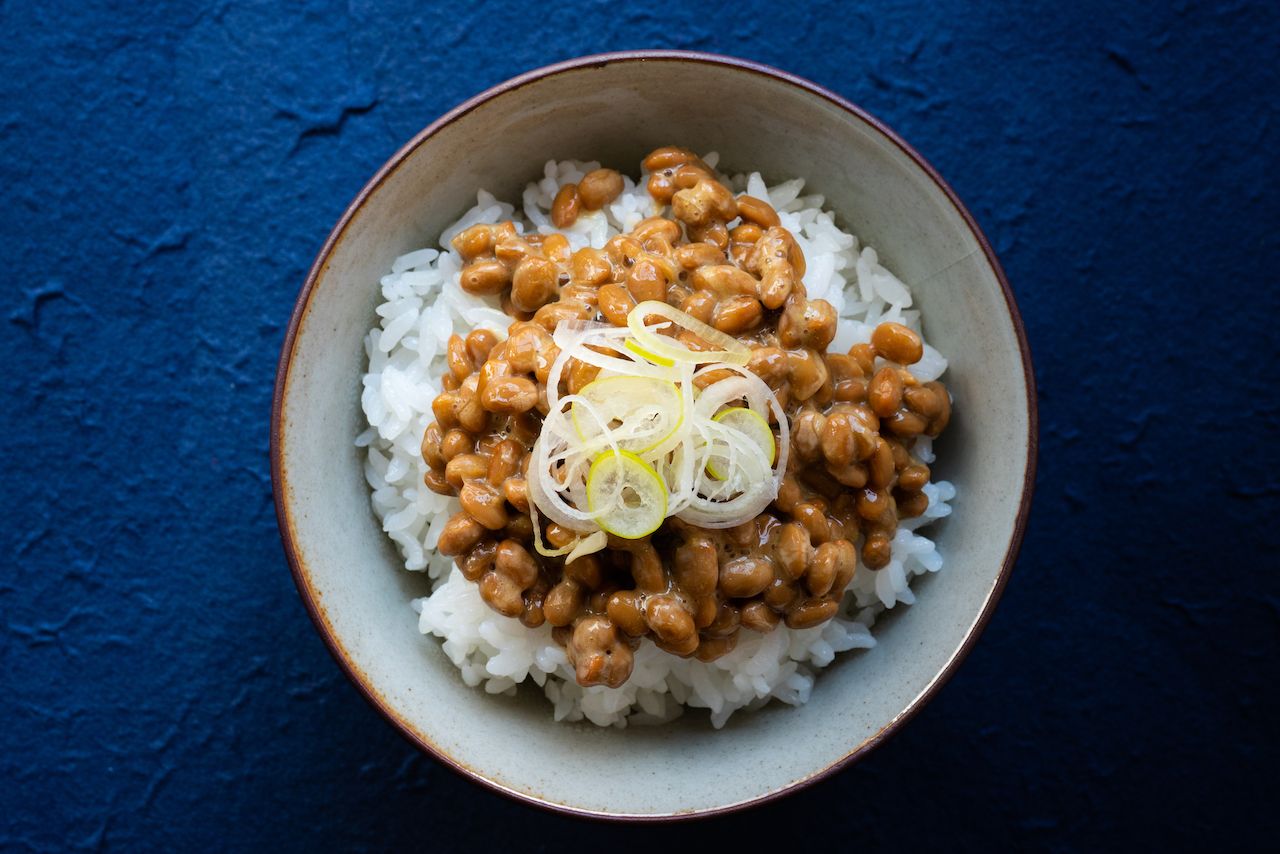 Fermentation, the process by which bacteria convert sugar or starch into acid or alcohol, is responsible for so much more than wine and beer. This pungent process is behind a whole host of funky foods and can be applied to more than liquid — dairy, soybeans, even root vegetables can be fermented.

Boza: This fermented Turkish drink has been around for at least 8,000 years. Though it can be made from any grain, it’s traditionally prepared by boiling millet with water, sugar, and a starter yeast and is then left to ferment for at least 24 hours. The resulting tangy, smoothie-like drink is considered a digestive aid, similar to kefir.

Nattō: Often described as slimy, gooey, and sticky, nattō is a Japanese dish made from fermented soybeans. Traditionally, nattō is produced by wrapping boiled soybeans in rice straw, the surface of which is populated by the bacteria Bacillus subtilis. While the smell is pungent (think funky cheese), the flavor is earthy. Nattō is typically served at breakfast over a bed of rice and topped with scallions or a raw egg. Though the exact origins of nattō are lost to history, legend says that it was accidentally discovered when samurais, in a hurry to retreat from battle, left cooked soybeans wrapped in straw in sacks carried by their horses. The body heat from animals apparently aided in the fermentation process.

Garri: Derived from the fermented mash of the cassava root, garri can take the form of a dough, grain, or a flour. The cassava is grated and combined with water, the starch is squeezed out, and then the remaining pulp is left to naturally ferment for three to seven days, a process which lowers the cyanide content in the cassava making it safe for consumption. Once the fermented pulp has been dried, it’s usually fried in palm oil. Garri is popular in Nigeria, where the garri grain is soaked in milk and eaten like cereal or shaped into a firm ball to create the starchy side dish eba, and it’s also popular in Ghana and Cameroon. 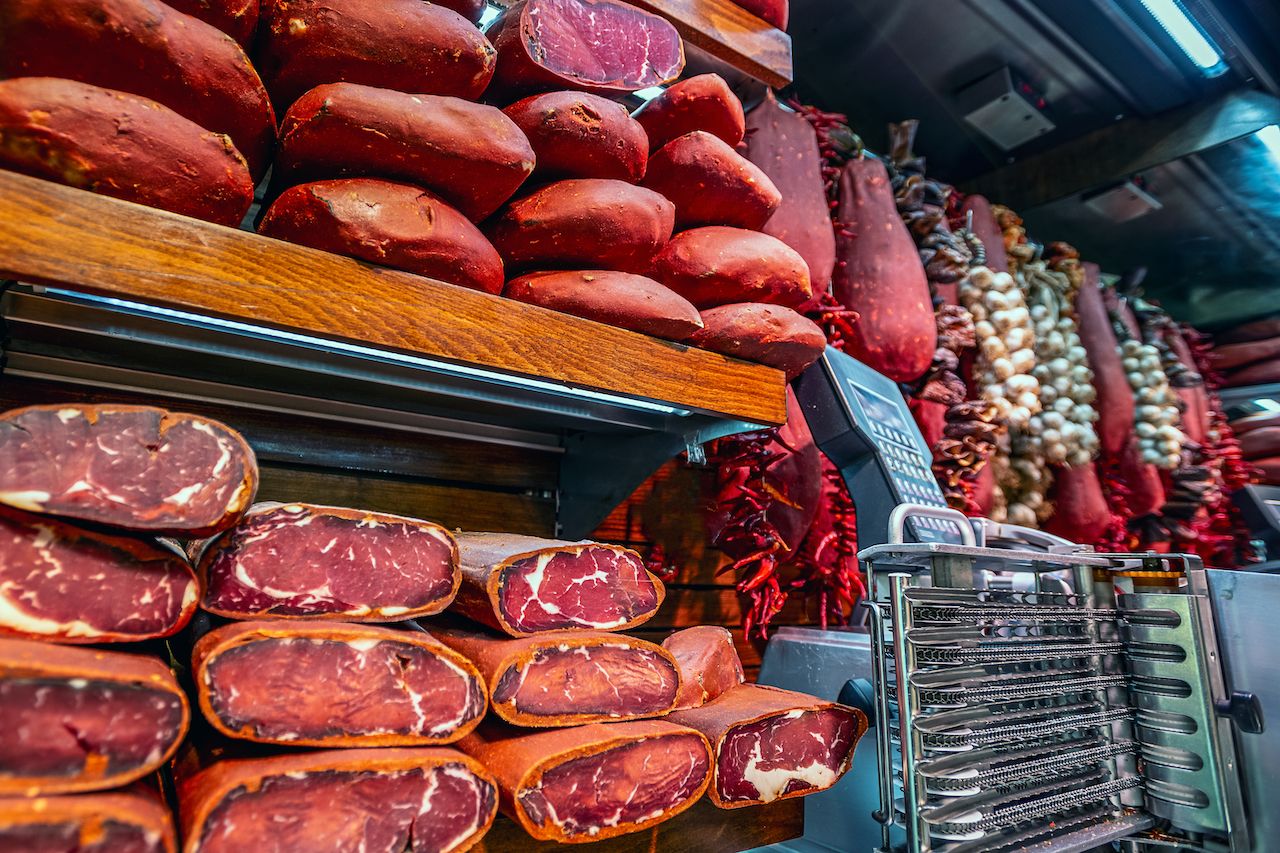 Drying is perhaps one of the simplest methods of food preservation. The process involves dehydrating foods, especially meat and fish, until there isn’t enough moisture left to invite the growth of bacteria that spoils food.

Pastirma: Dating back to the Ottoman empire, pastirma (sometimes called Turkish pastrami) is an air-dried meat also popular in Armenia, Greece, and Egypt. The name comes from the Turkish phrase meaning “being pressed” because, according to legend, Turkish soldiers kept slabs of spiced beef under their saddles. Made primarily from beef or camel, the meat is cut into strips, covered in salt (making it also a cured meat), dried out by the wind, seasoned with paprika and garlic, then dried again until it “has the consistency of wood,” according to Patric Leigh Fermor, a British historian who studies Greek culture.

Daing: This sun-baked fish from the Philippines is split open, salted, and dried in the open air, then fried until crisp. Any fish can be prepared as daing, but the dried sardine version of the dish is called tuyo. Daing is traditionally served at breakfast, alongside fried rice or egg and a dipping sauce, typically vinegar, while crispy tuyo are typically served as a light snack.

Lutefisk: A product of Norway, Sweden, and Finland that’s traditionally enjoyed during the holidays, this Nordic is fish incorporates some ingredients the uninitiated might not have realized were edible. Lutefisk literally means “lye fish.” Cod is dried to the point that it becomes leathery, and then it’s soaked in lye (a chemical you might recognize from the back of a bottle of Draino). The cod takes on a gelatinous texture, is notoriously stinky, and is even considered a near-toxic substance in Wisconsin. According to the Smithsonian, Scandinavians have been eating lutefisk since at least 1555, but it’s recently become more popular in the United States than in Nordic countries. 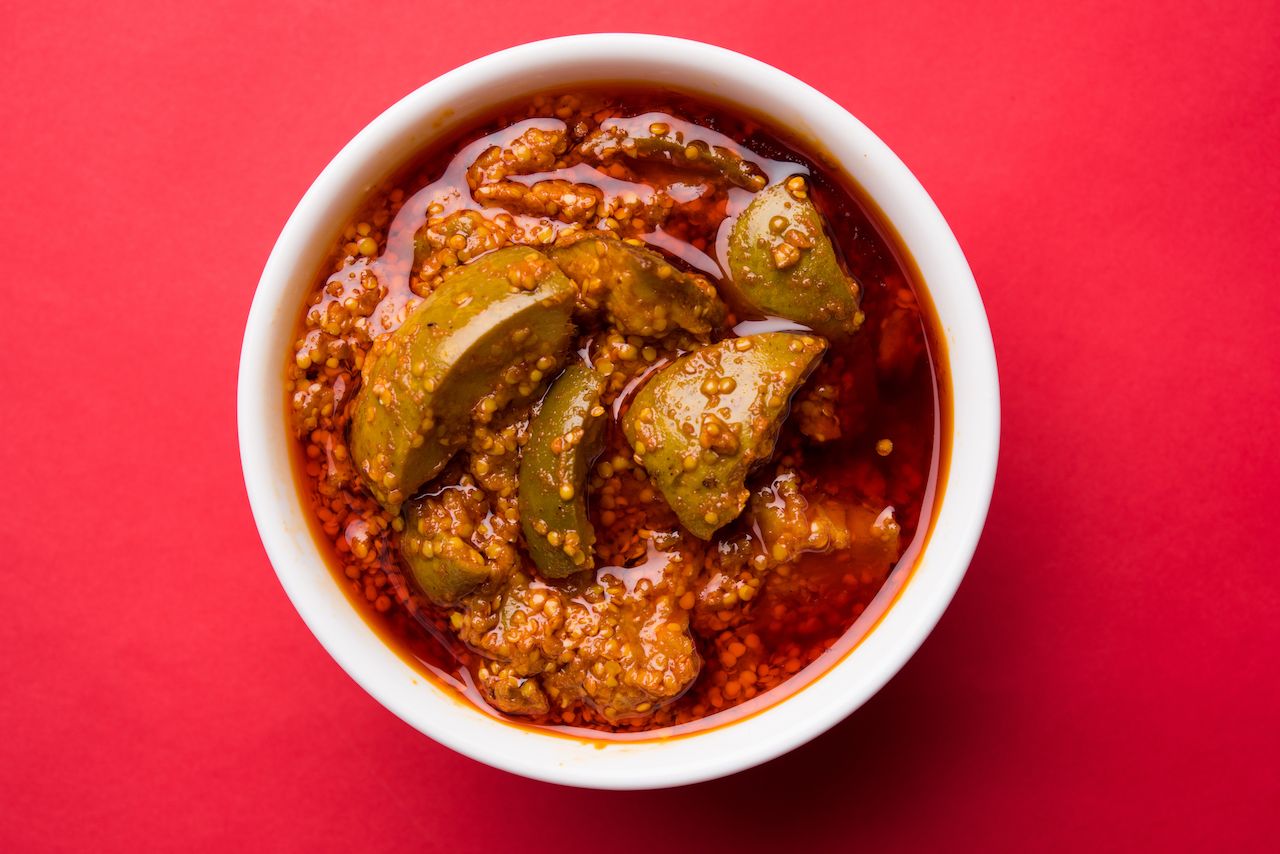 This method of food preservation involves soaking foods, typically vegetables and fruits though meat and eggs can be pickled too, in either vinegar or a salty brine. Pickled foods are often used as a garnish or condiment to give the main dish a tangy, sour kick.

Achaar: In India, achaar refers to any mixture of fruit and vegetables that have been pickled — typically limes, lemons, ginger, and mangoes seasoned with one key ingredient: chili pepper. In the north of India, mustard oil is added to the seasoning mixture while in the southern regions they use sesame oil. Fenugreek and coriander seeds round out the spice blend. Achaar is considered a condiment, beloved for its spicy and tangy flavors. According to food historian KT Achaya, pickles have been considered a delicacy in India since at least 1170 AD.

Cuerito: Popular in Mexico and Venezuela, cueritos are pork skins pickled in vinegar. Cueritos are what’s called in Mexico an antojito (literally “little craving”), a snack food typically sold at street food stalls or markets. The leathery rinds turn chewy and gelatinous, but to offset the perhaps off-putting texture, cueritos are often served with a lime, cabbage, and cucumber slaw spiced with chili sauce. Cueritos can also be served as a garnish on a cemita, tacos, or tostadas.

Rollmops: This German version of an hors d’oeuvre is a fillet of pickled herring wrapped around a savory filling, like a gherkin or an olive, held together by a toothpick. The name is a reference to its rolled shape, which takes on the appearance of jowls; mops is the German name for a pug dog. Rollmops are a crucial element in the German katerfrühstück, or “hangover breakfast,” because the salty fish supposedly restore electrolytes. Pickled, dried, and smoked fish have been popular in countries near the Baltic and North Seas for thousands of years, but this particular pub snack exploded in popularity in the 19th century. 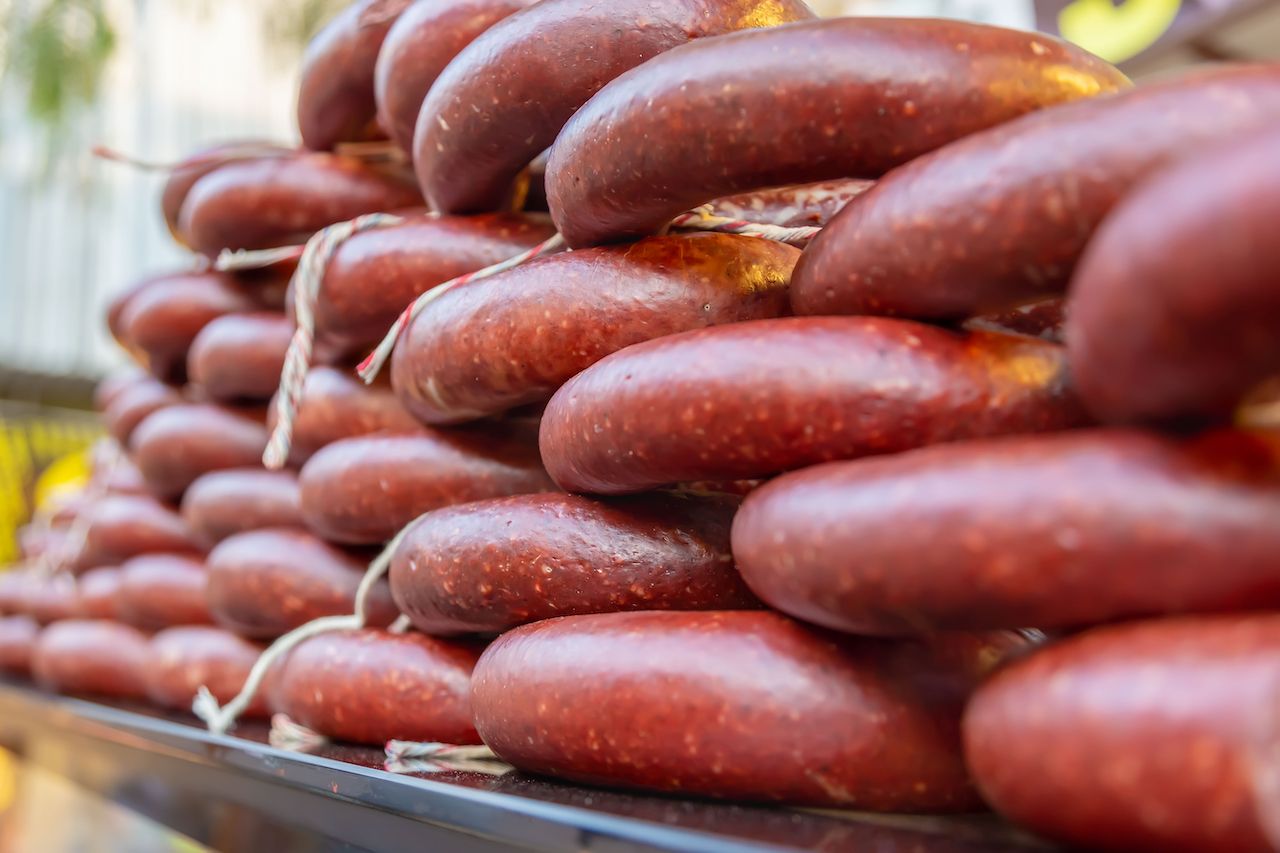 Curing, which can also involve a period of drying or smoking, is a general term used to identify any process that prevents the spoiling of meat. Salt is essential to the curing process as it draws out moisture from meat. Bacon is perhaps the most famous variety of salt-cured meat, but sausages, like salami, are also commonly cured.

Sujuk: Spiced with cumin, salt, paprika, garlic, and red pepper, this sausage is known for its high fat content. Though the Turkish were the first to make sujuk around 1000 BCE, it’s since spread to the Balkans and the Middle East, and today it’s popular in countries like Lebanon, Bulgaria, and Kyrgyzstan. The meat is cured for at least six weeks, at which point it acquires a texture similar to salami and both a tangy and spicy flavor.

Hákarl: The Vikings were an industrious bunch, famous for supplementing their seafaring lifestyle with stockfish — cod dried on massive wooden racks. These iron-stomached warriors are responsible for the invention of hákarl, the cured meat of a Greenland shark. Typically, the flesh of these long-lived sea creatures is toxic, but the Vikings buried the dead sharks under mounds of dirt and rocks, aging the meat until the poison dissipated. The result is pungent — to put it lightly. The smell of hákarl is sometimes compared to urine while the taste falls closer to a funky blue cheese.

Mettwurst: This uncooked sausage (rohwurst) first appeared in German cuisine 500 years ago. The ground pork and beef sausage is first cured, then either smoked or air dried. The sausage is seasoned with garlic, pepper, and caraway and sometimes rum or Cognac. Mettwurst is typically only smoked for a short period of time, leaving it soft enough to spread on toast. Sausage is an integral part of the German diet; the country boasts 1,500 different varieties of wurst.

Food + DrinkHow To Preserve, Pickle, and Dry Foods in Your New Free Time
Tagged
Food + Drink
What did you think of this story?
Meh
Good
Awesome