While food tourism in Europe has long thrived in places like France and Italy, Serbian cuisine has remained under the radar for many tourists. The truth, however, is that this Balkan country is one of the best places to visit for anyone who enjoys good food.

In Serbia, most of the cooking is done at home, and recipes are passed from one generation to the next. Locals are strict when it comes to the quality of the products they feed their families. Serbia is still largely an agricultural country where locals grow their own fruit and vegetables and produce dairy, meat, and honey. Instead of shopping at a chain grocery store, often they’ll visit the local butcher to hand-pick the meat for kobasice. While visiting, a trip to the farmers market in Pirot to see vendors showing off homemade goods is essential.

When it comes to spices, Serbian isn’t the most adventurous of cuisines. Chefs primarily stick to the classics: paprika, spicy red pepper, garlic, black pepper, and salt. Soups and salads tend to be topped with parsley. Families and friends enjoy long sit-down meals that start with a salad and an appetizer, a meat dish for the main course, and something sweet for dessert. Most meals are accompanied by rakija, a strong brandy made from plums, quinces (a pear-like fruit), or other fruits.

Whether you’re planning a trip to Belgrade, the capital city, or heading to smaller cities like Niš and Pirot, your appetite will be more than satisfied. These are the most delicious dishes to try. 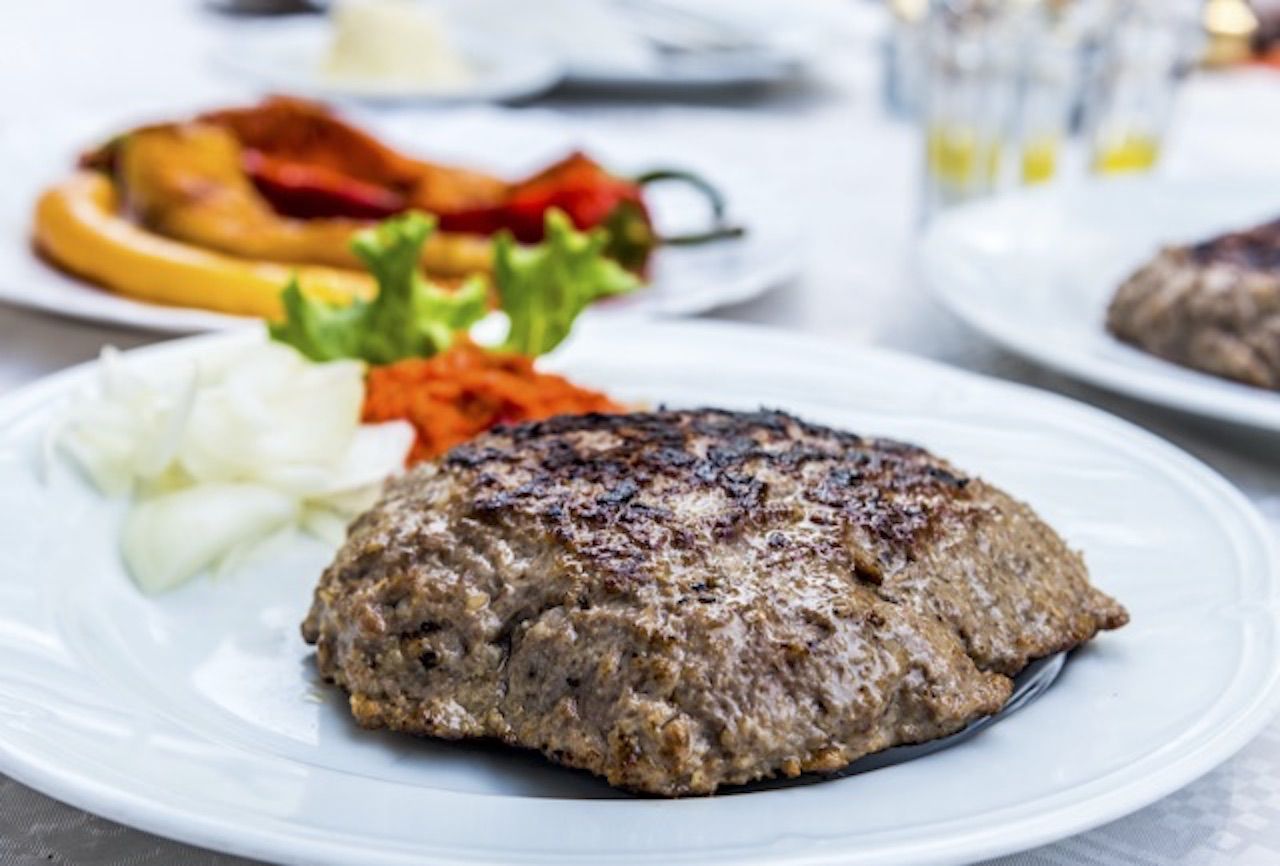 Pljeskavica is the Serbian version of a hamburger. The dish can also be found in Croatia, Bosnia, and Montenegro. It comes with a side of sliced tomato, lettuce, and onion, but unlike your typical hamburger, pljeskavica is served without the bun. The patty is a mixture of pork, lamb, and beef, and locals usually order it well done. You can ask for the traditional version or order it with melted cheese on top. Either way you order, order hungry, because each portion is typically bigger than your palm and around a quarter-pound of meat. 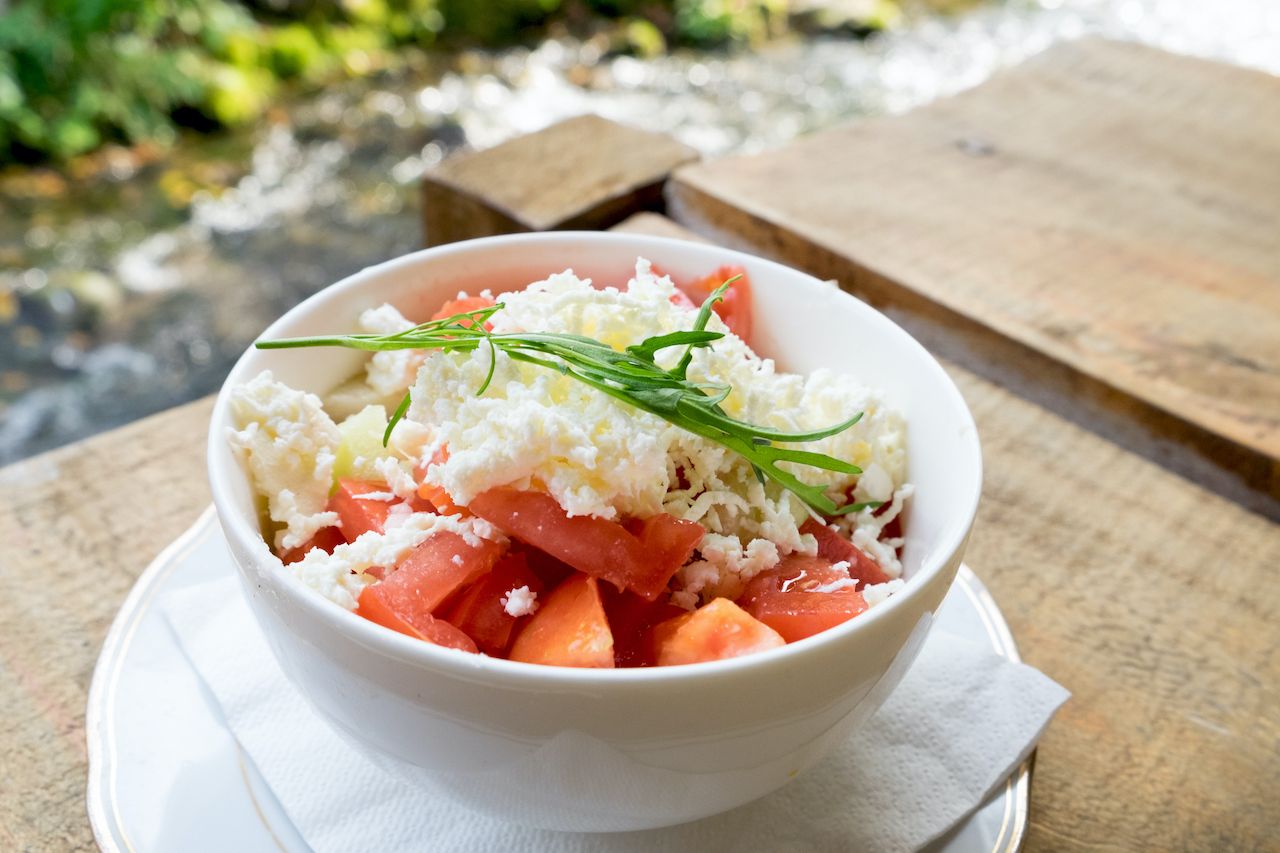 Serbia has some exciting salads. While healthy and generally meat free, they are still very filling. Shopska is a type of chopped salad popular in the Balkans, and it is a must-try. It’s made with tomatoes, cucumber, feta cheese, and onion, and is topped with a single black olive and a parsley leaf. Locals dress it with olive oil and dip bread in the remaining juice on the bottom of the dish after finishing the whole thing. If you throw the juice away, there’s a chance you’ll be called out for being wasteful. 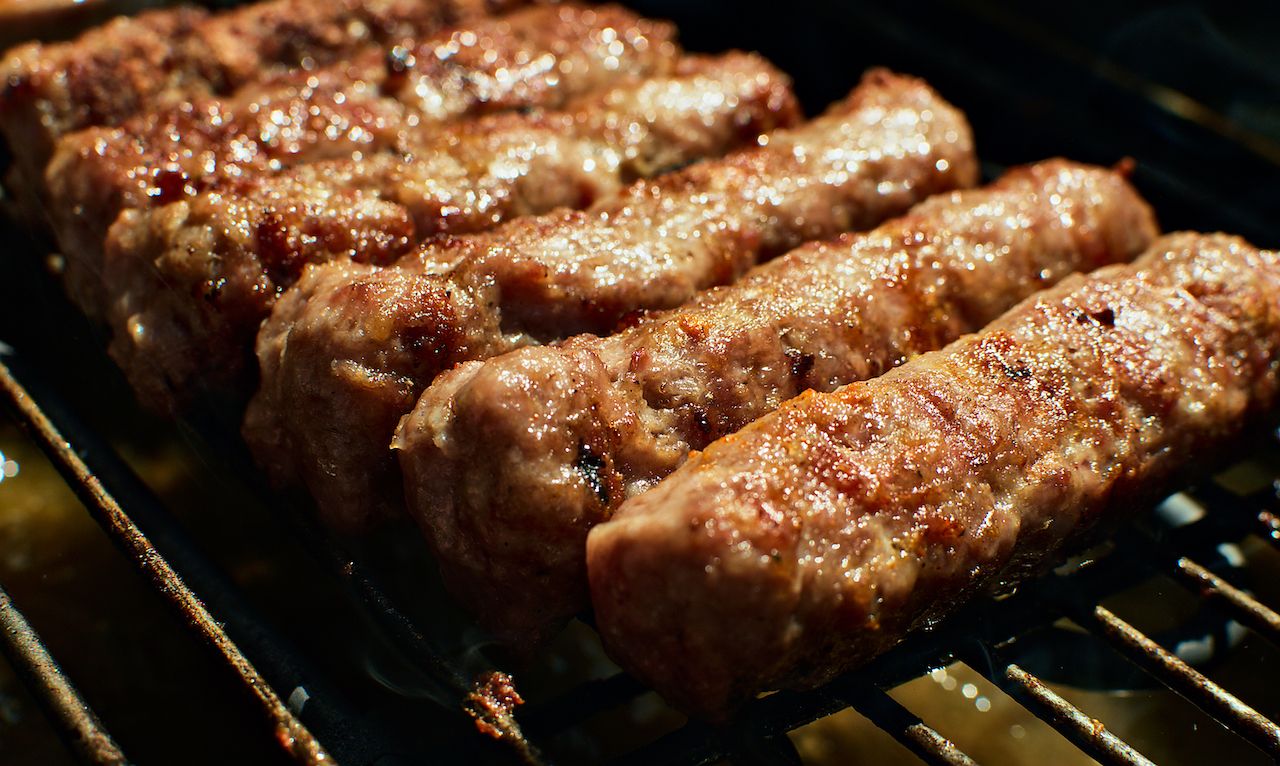 Originally a Persian delicacy, this dish found its way into southeastern Europe during the years of the Ottoman Empire. Ćevapi (sometimes referred to as ćevapčići) are small sausages made with one of three variations of minced meat: pork; pork and lamb; or pork, lamb, and beef. Ćevapi aren’t spicy, but do have a hint of black pepper and garlic. Serbians shape the meat by hand and are very particular about the final form.

Ćevapi are considered both a delicacy and a fast-food item on the Balkans. In Belgrade, you’ll see street vendors selling them on every corner, usually accompanied by generous slices of white bread. When you order them at a restaurant, cevapi come with a serving of tomatoes and onion, as well as kajmak. 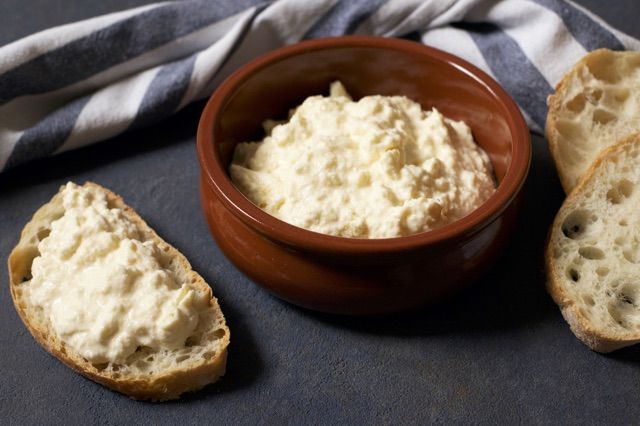 The phrase “it gets better with age” applies perfectly to this Serbian delicacy. Kajmak is a type of cheese made from unpasteurized and unhomogenized milk. Kajmak tastes both smoky and buttery, and the longer you let it sit, the stronger the taste becomes. While the cheese is rich, it doesn’t feel heavy at all. It’s used both as a dish paired with toast or pita and as a condiment with pljeskavica, ćevapi, steak, or fries. 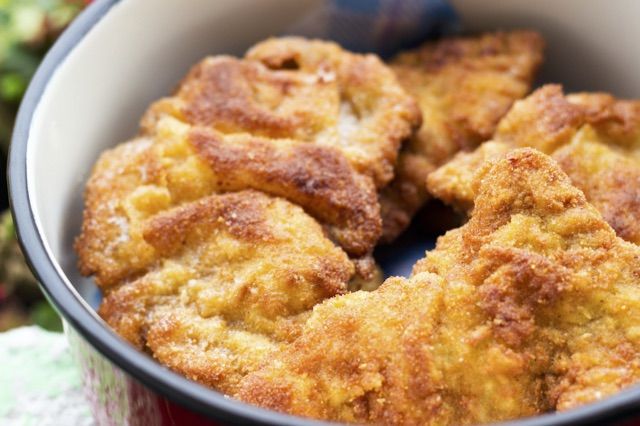 According to legend, this now-classic dish originated by accident. In 1959, the Serbian chef Mića Stojanović ran out of chicken and didn’t have anything to serve to a distinguished Soviet guest. He scrambled around the kitchen and found some veal, which he prepared with tartar sauce and decorated with tomato and lemon. The arrangement looked very much like the medal of honor of Karađorđe, a Serbian freedom fighter, which is how the dish got its name.

Karađorđeva šnicla is a type of fried, breaded schnitzel stuffed with pork or veal. It makes for excellent finger food and is a very popular appetizer. It can be served as a main, as well, in which case it comes with roasted potatoes. The dish pairs well with kajmak for a meal that’s a mix of crispy texture and rich, creamy cheese. 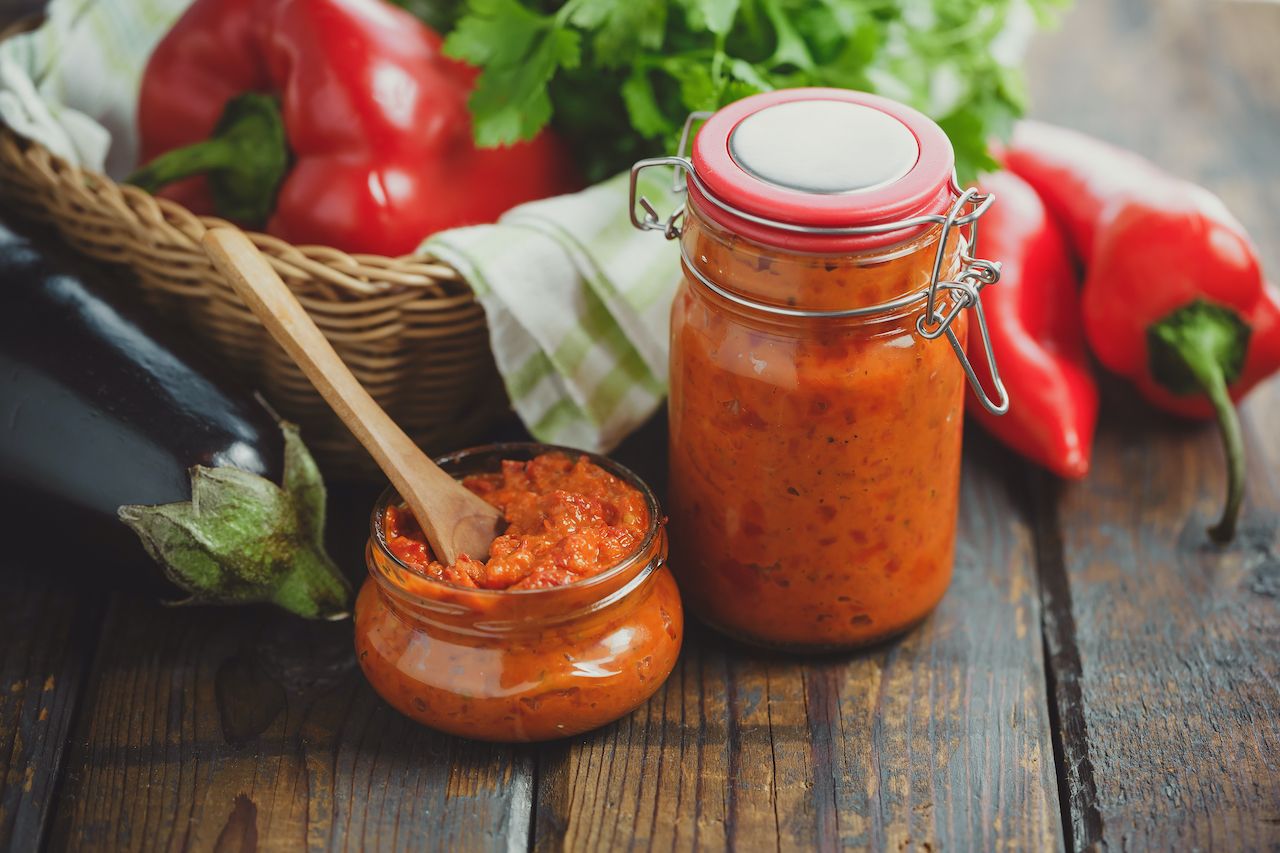 Ajvar is another staple dish that’s usually served as a side. It became popular during World War II because it’s cheap and easy to make. Serbians sometimes refer to it as a salad, but it’s more of a condiment, really, and can be added to most dishes. It’s made with a mix of garlic, roasted red bell peppers, oil, and eggplant, and has a light and refreshing quality. It’s commonly served alongside meat dishes, but vegetarians can still enjoy ajvar on a slice of toasted bread. 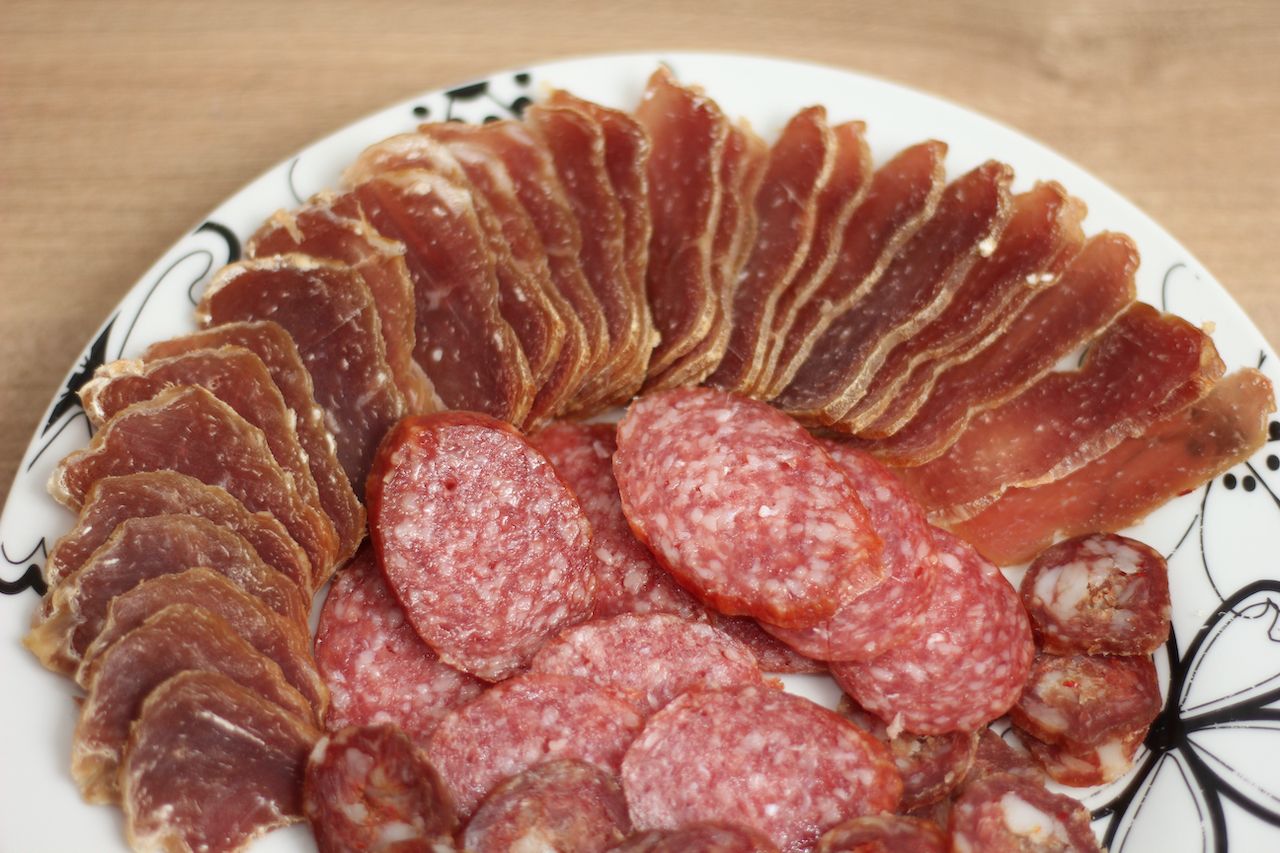 Serbian cooks are resourceful and like to use as much of the animal as possible when preparing a meal. Kobasice is sausage, and it’s typically grilled and seasoned with garlic and paprika. Locals still go to the butcher to choose the exact cut of meat they like for kobasice. There are a few variations you will find depending on the region you’re in. You’ve got Sremska kobasice (from Srem), krvavice (blood sausage), kulen (from Syrmia), and švargla (similar to headcheese and made with organs and head meat). Sausage is a staple not just here but also in Slovenia and Croatia, two other countries that made up the former Yugoslavia. The country broke up in 1992, but similarities in the three cuisines remain to this day. 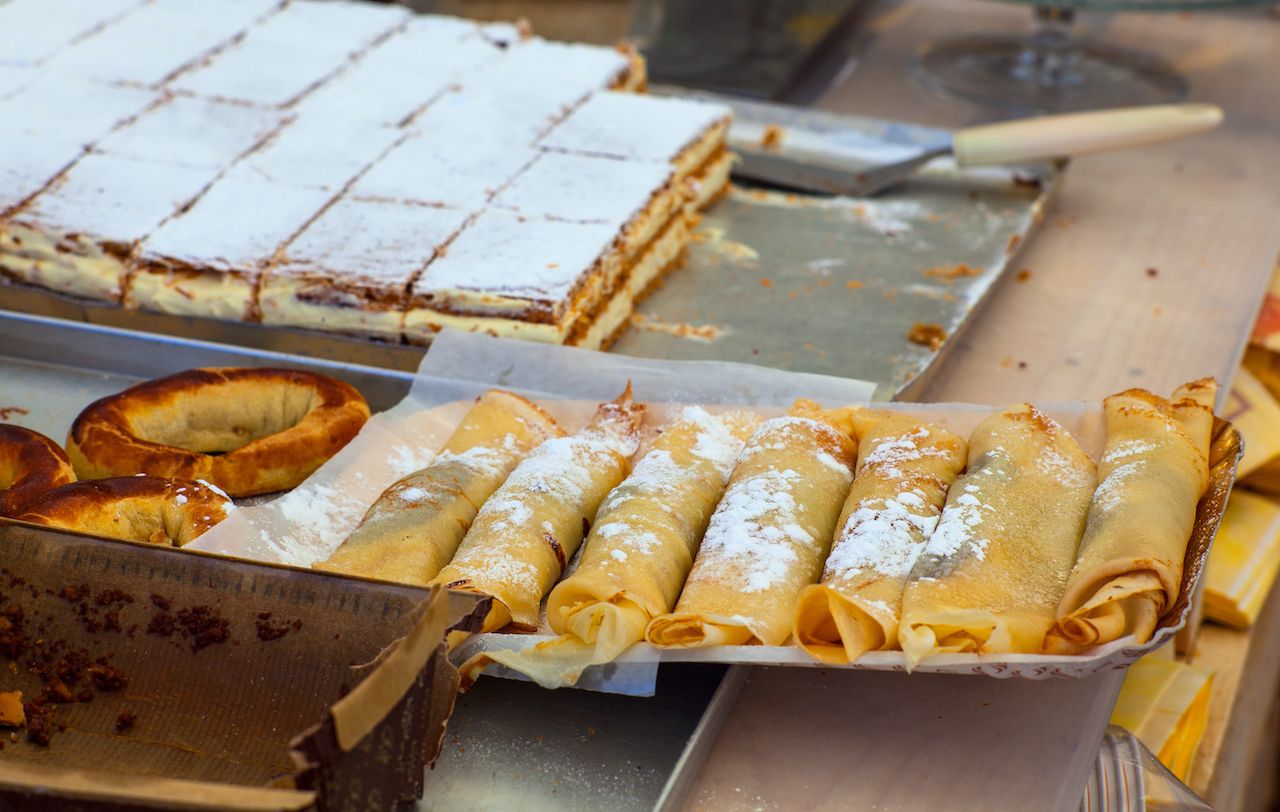 Don’t skip dessert while in Serbia. Order a palačinke, the Balkan version of a French crêpe. The light dessert is made with flour, eggs, milk, and butter. It comes soft, delicate, and rolled up or folded, depending on how much topping is inside. You can have it with whipped cream or Nutella. The tastiest option, however, is to order it stuffed with slatko: Serbian jam that comes in a wide variety of flavors, including strawberry, raspberry, blueberry, plum, peach, and apricot.

Road TripsHow To Plan the Ultimate Road Trip Through the Balkans
Tagged
Food + Drink Serbia
What did you think of this story?
Meh
Good
Awesome

How To Become Serbian in 17 Steps

10 Signs You Were Born and Raised in Serbia

How To Piss Off a Serbian