If you want an affordable road trip that takes you through several countries and a diversity of cultures in a relatively short time, the Balkans are the ultimate destination. Unless you’re daunted by changing currencies or multiple languages, this area of Eastern Europe is the perfect place to have an epic vacation on a budget. Composed of Albania, Bulgaria, Bosnia and Herzegovina, Croatia, Montenegro, Kosovo, North Macedonia, Moldova, Serbia, and Slovenia, the Balkans region might sound vast and intimidating, but it’s easier than you think.

Just a few hours of driving will bring you from rural and mountainous Bosnia to the sunny coast of Croatia. A bit farther, you’ll find yourself on the rugged and sparse roads of Albania. One of the best things about all this inter-country travel is that it’s incredibly cheap. Renting a car for a week shouldn’t set you back more than $250, and though prices vary by country, the average meal shouldn’t exceed $7 or $8. You won’t want to plan every aspect of your trip, but you should at least have a basic idea of the area’s geography, and which countries you’d like to visit. Here’s how to get the most out of your Balkans road trip.

Starting out — Bulgaria and Serbia 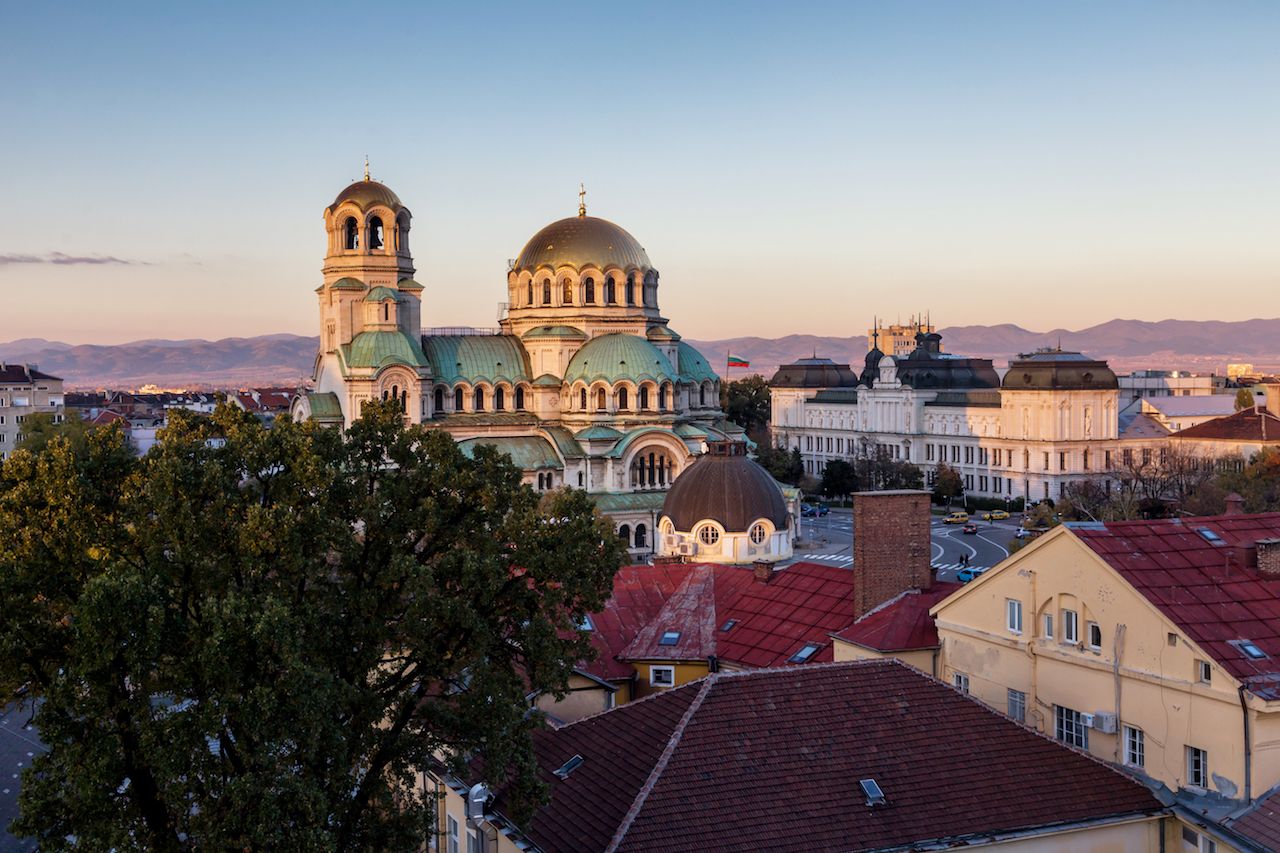 The best part about the Balkans is that you can pretty much hit the road from any major city you want. The configuration of the countries makes it easy to drive through the region in a loop, regardless of where you decide to begin. That said, Sofia, Bulgaria is a great place to start. The night before you set out, you can make a pre-journey toast at the outdoor The Cocktail Bar, or grab dinner at the Sense Hotel Rooftop Bar, which has sweeping views of the iconic St. Alexander Nevsky Cathedral. 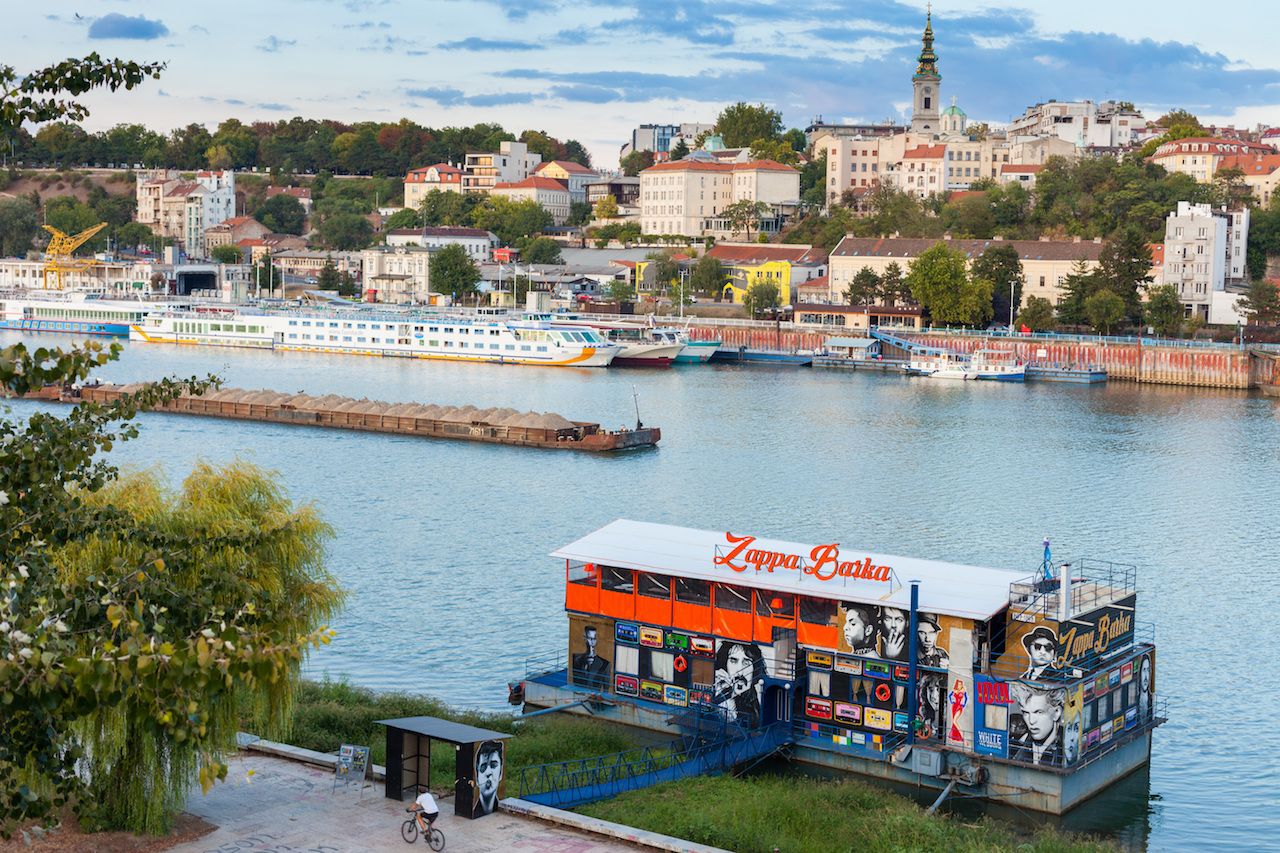 When you’re ready to start driving, head west to Belgrade, the capital of Serbia. It takes about five hours without stops. While you can certainly hit some smaller cities along the way, it’s worth it to head straight for Belgrade so you have as much time as possible there. Spend an afternoon exploring Belgrade Fortress and the surrounding Kalemegdan Park, and no matter what day of the week you arrive, there’s always something happening at night. Belgrade is famous for its floating nightclubs, and it’s pretty obvious why: They’re floating nightclubs. Located inside barges along the Sava River, which feeds into the Danube, these clubs are fairly typical on the interior. The moment you look outside or step onto the deck, though, you’re reminded that you’ve been shredding a dance floor just a few feet above the water. 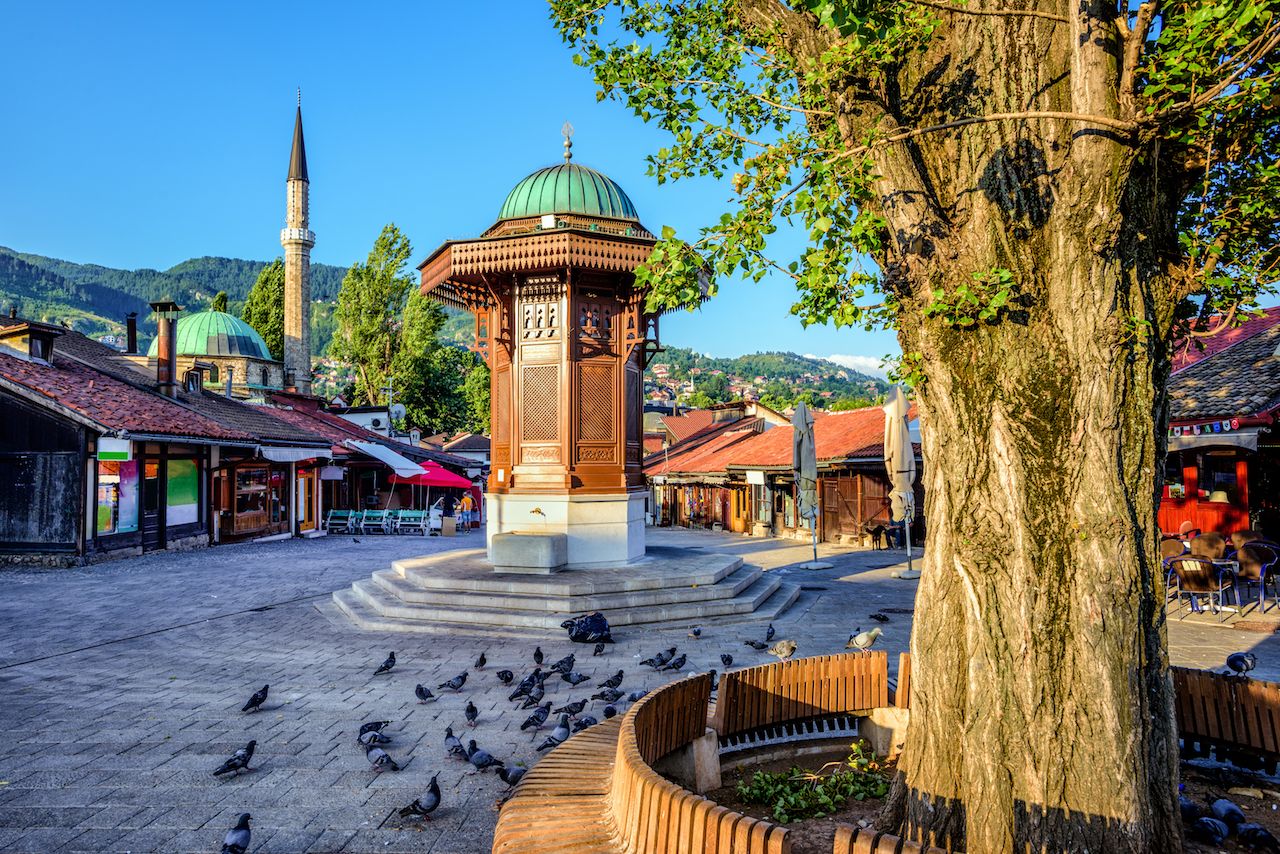 You’ve kicked off your road trip with a bang in these major cities, but now it’s time to plunge into more rural terrain. Indeed, if you’re not careful, you might get more “bang” on this next leg of your trip than you’re looking for. Once you continue west and cross the border of Bosnia and Herzegovina into the mountains, you’ll start seeing road signs that read “Danger: Land Mines.” Don’t worry. Most of these unexploded mines, which remain from the Bosnian War of the early ‘90s, are inactive and pose no threat to you. Stay on main roads, heed the signs, avoid any off-roading, and you’ll be fine.

History buffs should be sure to stop in Sarajevo. Many of us might not be able to articulate exactly how or why World War I started, but the assassination of Archduke Franz Ferdinand on the Latin Bridge in Sarajevo is generally the one detail we’ve retained from high school history class. 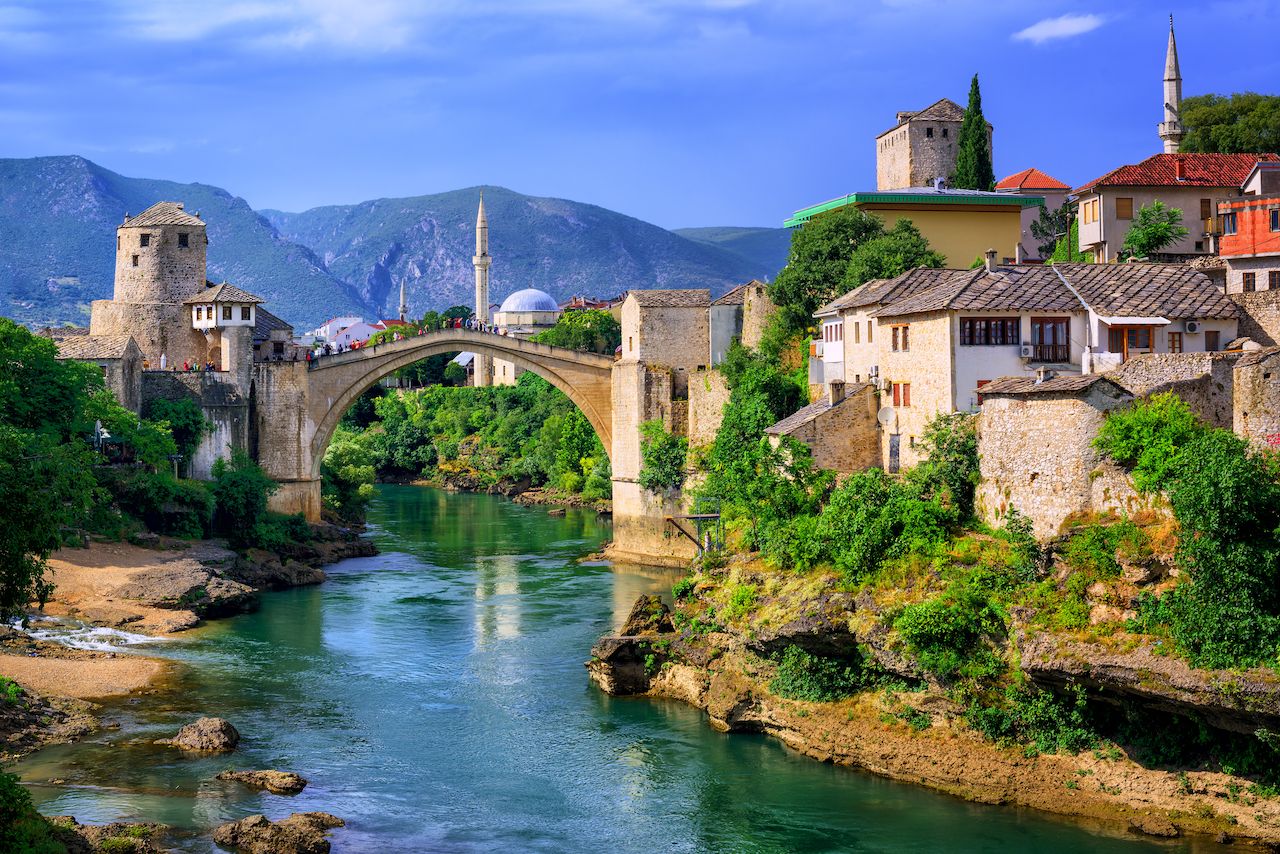 You can spend the night in Sarajevo, or move on to the quieter, lesser-known Bosnian city of Mostar, about two hours south. Mostar’s defining feature is the 78-foot-high Stari Most bridge, a 16th-century Ottoman bridge right in the city center. If you’re lucky, you might witness a few Bosnians diving from the bridge into the river, which is considered a local right of passage. 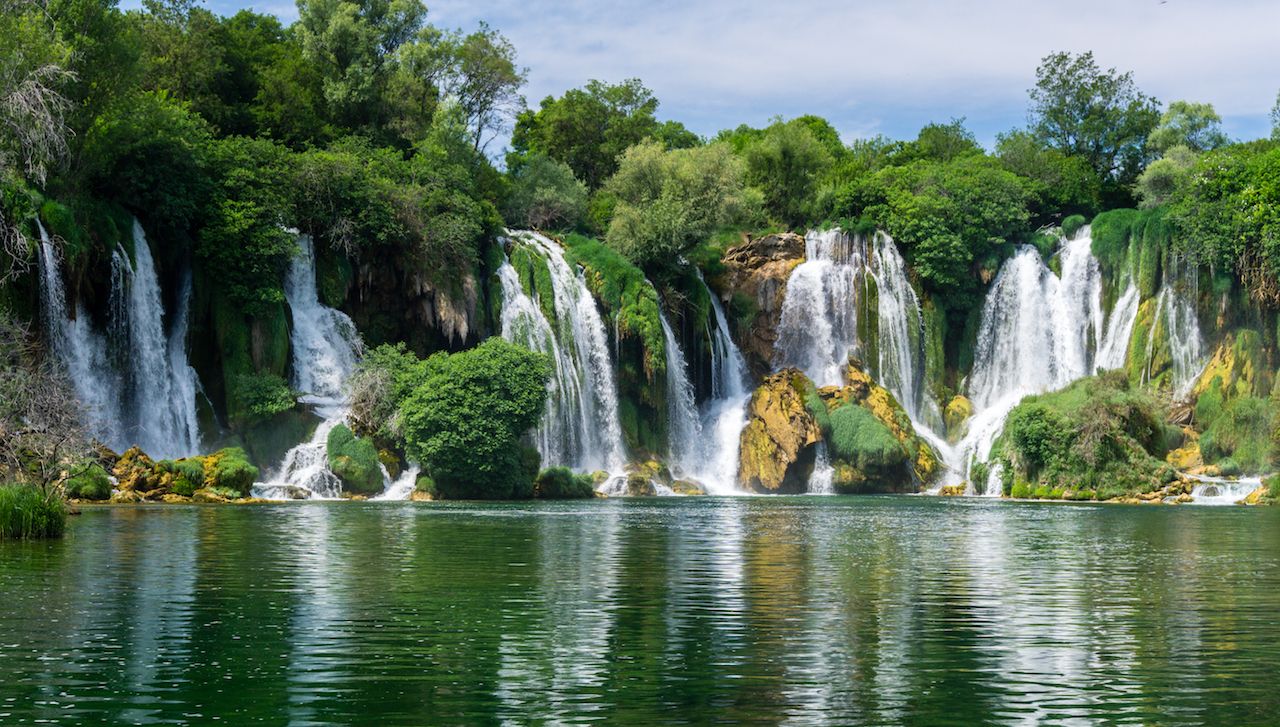 Before crossing the border into Croatia, stop and visit Kravica Falls, about an hour south of Mostar. This series of cascading waterfalls rivals anything you’ll find in Iceland, and it’s a great way to experience Bosnia’s often overlooked natural beauty.

The Mediterranean coast — Croatia and Montenegro 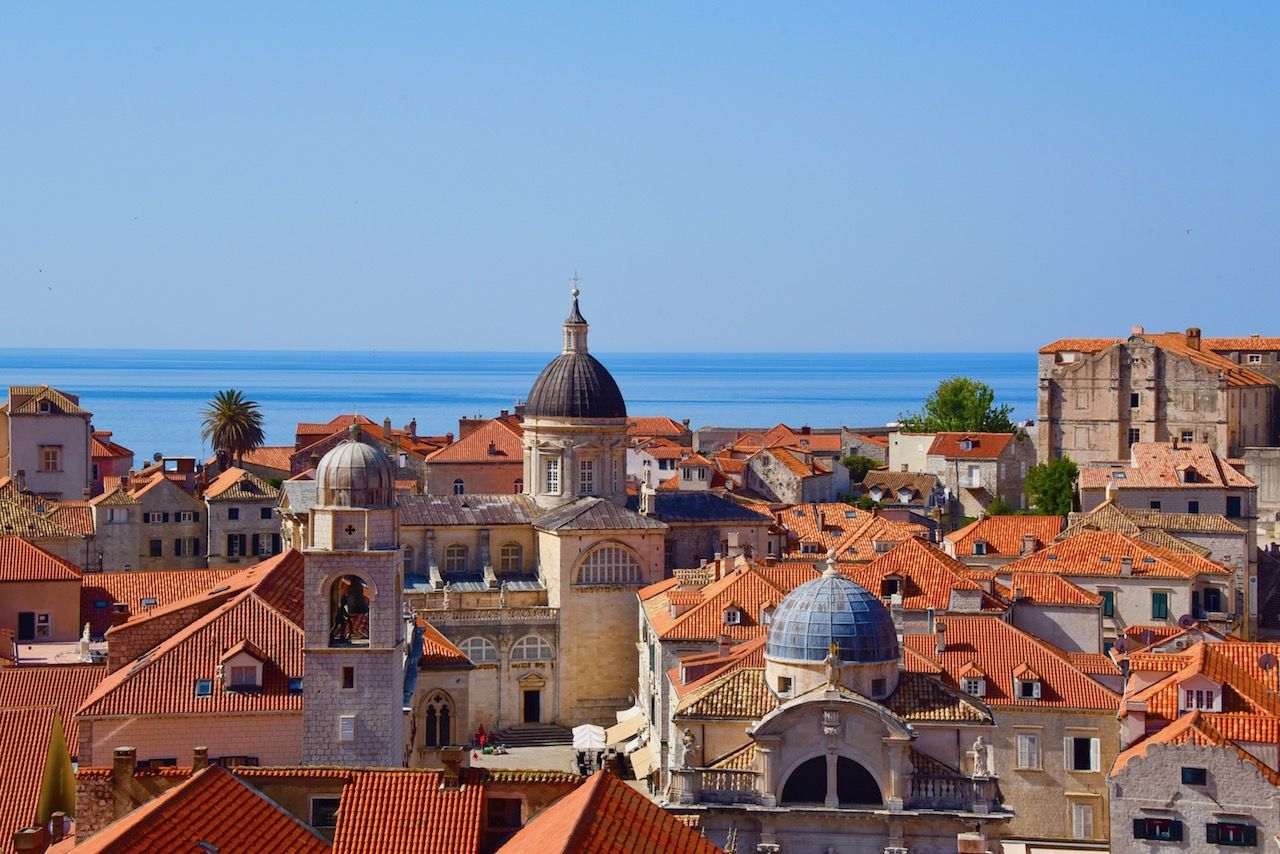 If you have lots of time, you can continue southwest and explore more of Croatia, like Split, Zagreb, and Plitvice Lakes. But if you’re short on time, cut southeast toward Dubrovnik.

Arriving in Dubrovnik might at first feel like arriving in Italy. With a distinctly Mediterranean vibe, the city almost feels like an off-center extension of Western Europe. Its main street, the Stradun, is lined with French and Italian-inspire eateries, and food isn’t quite as cheap here as in other parts of the Balkans. Whatever you end up eating, try to add some Dalmatian ham, a local meat that every waiter will highly recommend.

Dubrovnik isn’t a huge city, but it’s worth spending a night or two there, especially if you’ve always wanted to experience the real-life King’s Landing from Game of Thrones. Banje Beach is a five-minute walk from the town center, and you can easily spend a whole day exploring the medieval Walls of Dubrovnik that encircle the town. And, unlike many cities where the nightlife is inconveniently located away from the historic streets, Dubrovnik’s best club, Culture Club Revelin, is literally inside a fortress in Old Town. 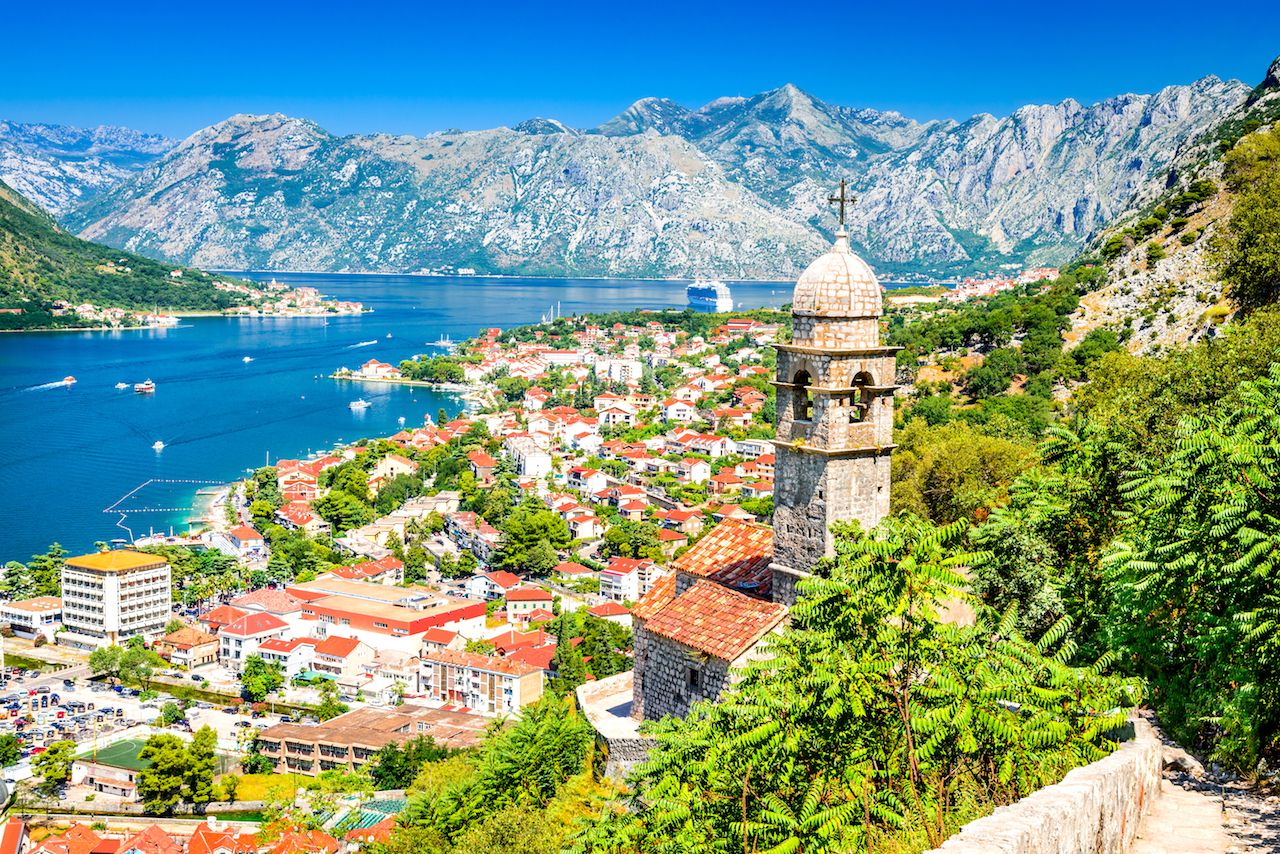 The drive east along the Croatian and Montenegrin coast is probably the most picturesque of the entire trip. It will take you through several seaside towns you should stop and explore at your leisure, including Perast and Kotor. It’s worth spending an afternoon checking out the Bay of Kotor and the nearby Lovcen National Park before continuing east. If you want, you can hit the Montenegrin capital of Podgorica, but there are so many scenic towns along the route you shouldn’t feel bad about skipping it. 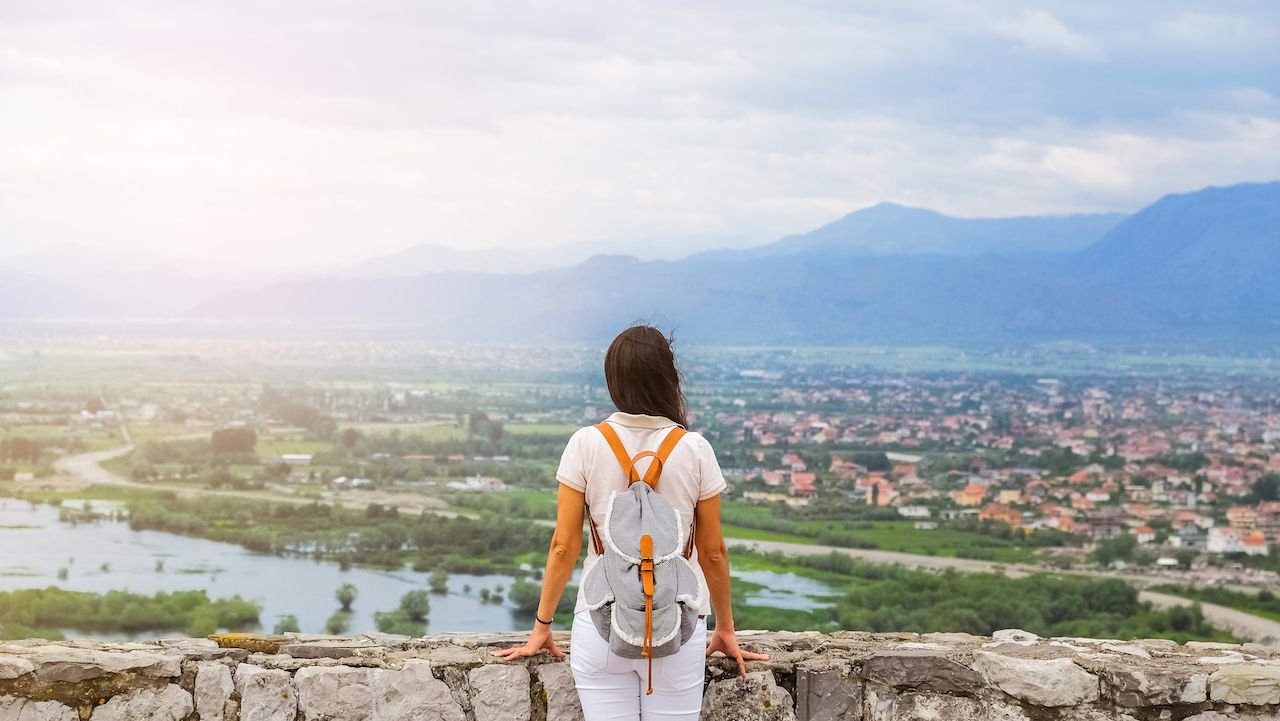 The country has a prominent Islamic influence, which is apparent the minute you cross the border. The landscape is dotted with an abundance of mosques and minarets, the Muslim call to prayer echoes through cities five times a day, and very little English is spoken. It’s also worth noting that credit cards are rarely accepted, so make sure you’re carrying Albanian Leks. This, combined with the country’s largely rugged and undeveloped landscape, makes you feel like you’ve into an entirely different part of the world. 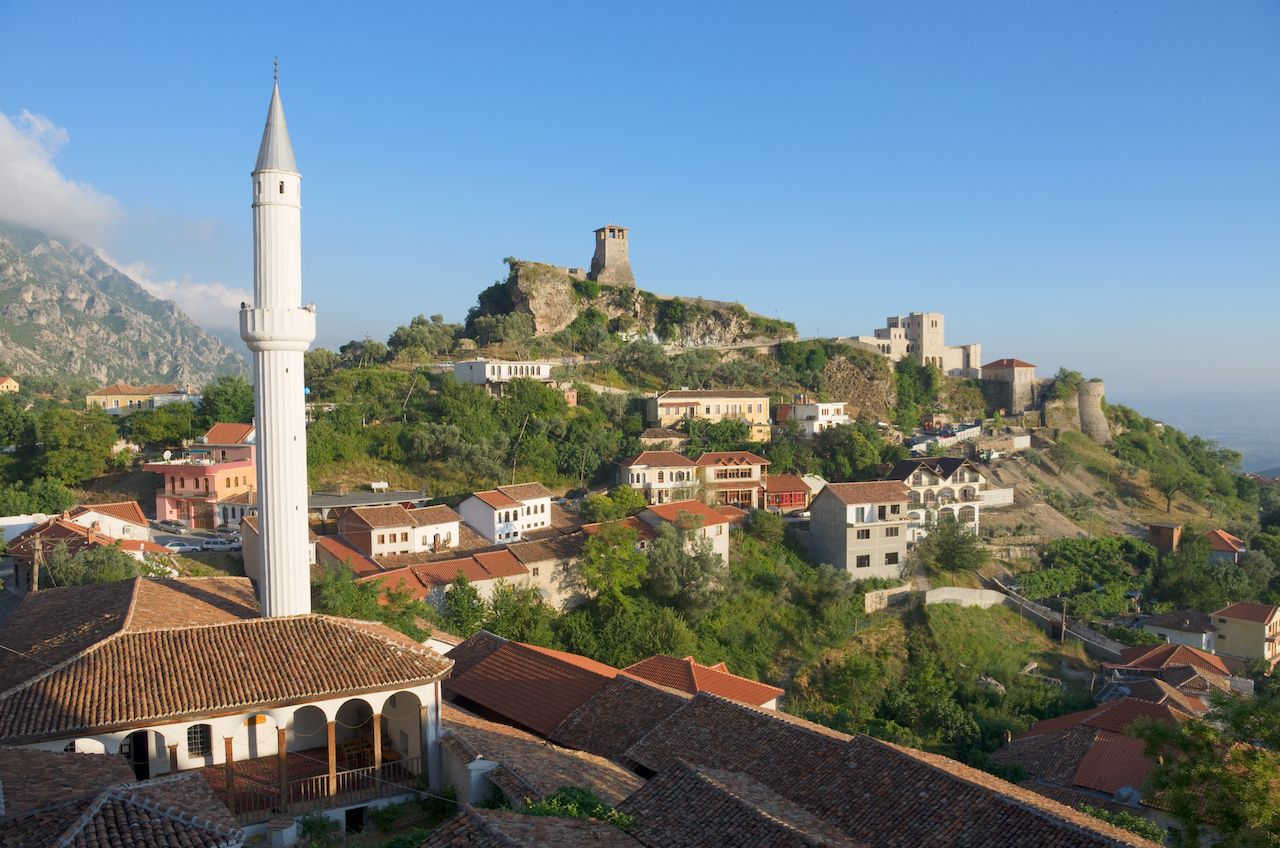 If you decide to spend a night in Albania, the town of Kruje is a good choice. About an hour north of the capital of Tirana, the road to Kruje takes you up a winding tree-lined hill to a medieval town, still very much in touch with its roots. Stay at the aptly named Hotel Panorama for sweeping views of the town and surrounding countryside. When it comes to food, don’t be afraid to indulge. Food here is cheaper than anywhere else in the Balkans, with a hearty kabob entree costing only $4 or $5. If you spend even more time in Albania, you’ll get to enjoy practically empty, stunning beaches — some of the most underrated beaches in the world.

The home stretch — North Macedonia and back to Bulgaria 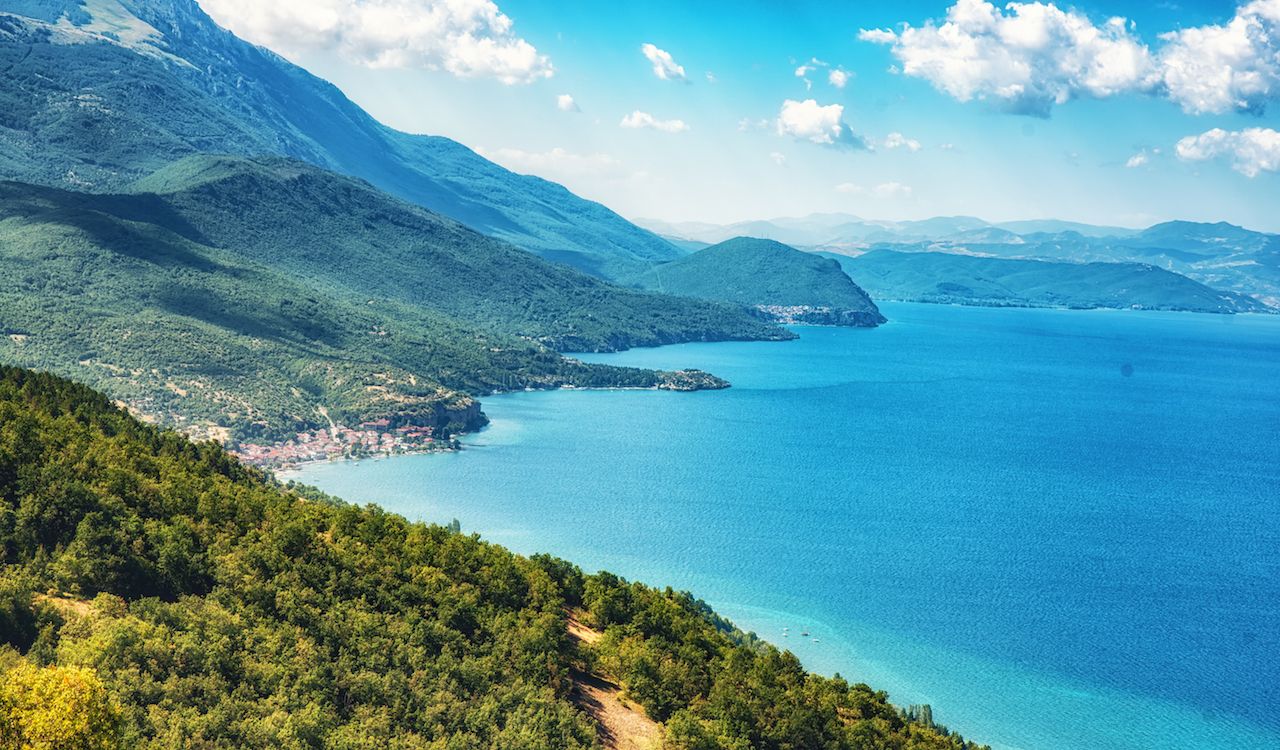 You’ll have to go a bit out of your way to see everything the Republic of North Macedonia has to offer, but it’s worth it. Cross the border close to Lake Ohrid and spend some time in the lakeside town before heading to Galičica National Park just a few minutes’ drive away. Find a hiking trail and spend a few hours stretching your legs or, if you’re really ambitious, hike Galičica mountain itself.

The most direct route back to Sofia would take you due west toward the Bulgarian border, but then you’d miss out on North Macedonia’s most stunning natural landmark: Matka Canyon. A two-and-a-half hour drive northeast from Ohrid, and just 30 minutes outside the capital of Skopje, the canyon extends for 12 miles down Matka Lake. You can hire a boat to bring you down the lake, or traverse the winding walking paths, which pass through several medieval monasteries. There’s even a restaurant right on the water’s edge, so you can enjoy lunch with some pretty incredible views. 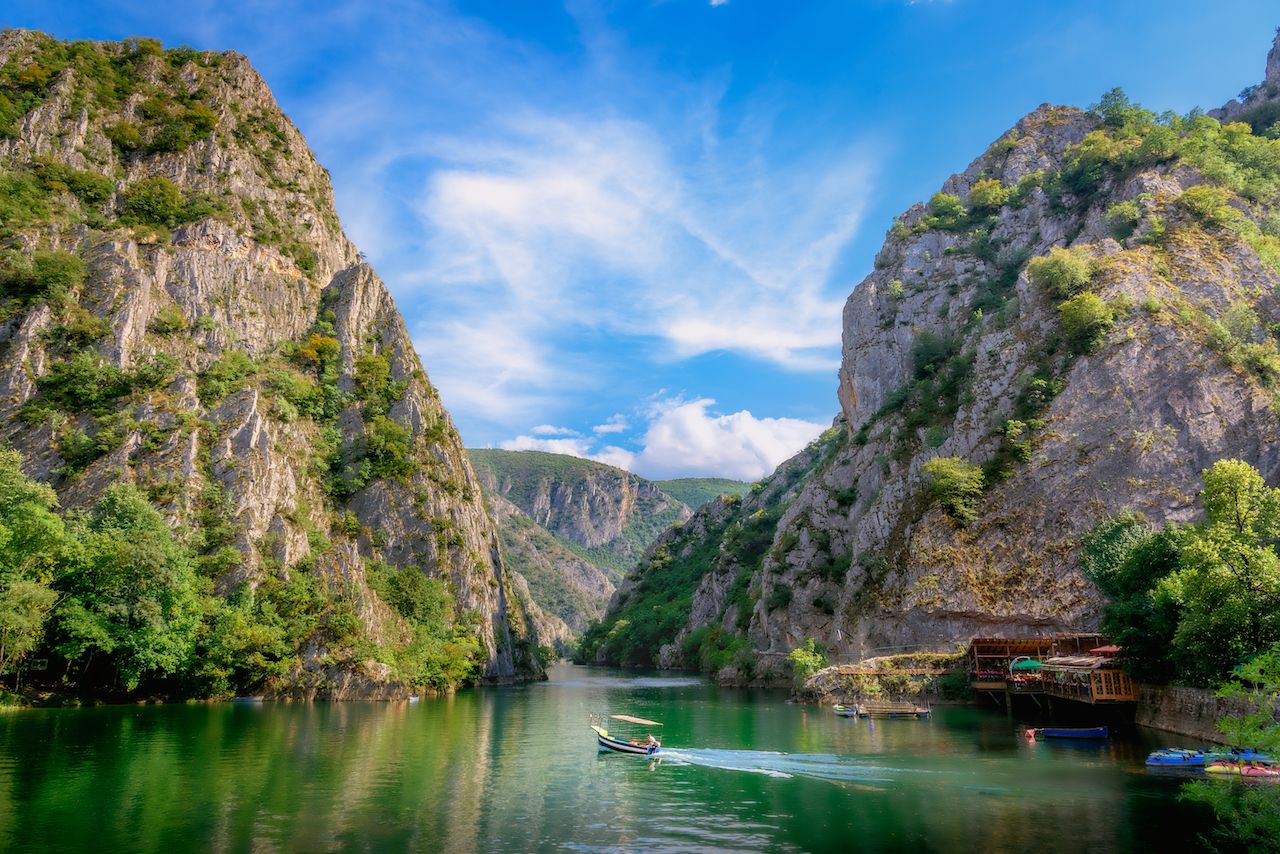 You can stop in Skopje if you like, but your time might be better spent heading for Bulgaria. Return straight to Sofia if you’re sick of the road and crave a bit of civilization or take a short detour to the Rila Mountains, just under two hours south of the capital. The mountains offer some of Bulgaria’s most beautiful natural scenery, and the Rila Monastery is certainly worth the detour. A UNESCO World Heritage Center, it’s the largest Eastern Orthodox monastery in Bulgaria, and a visit here is the perfect way to finish your Balkans trip on a high note. 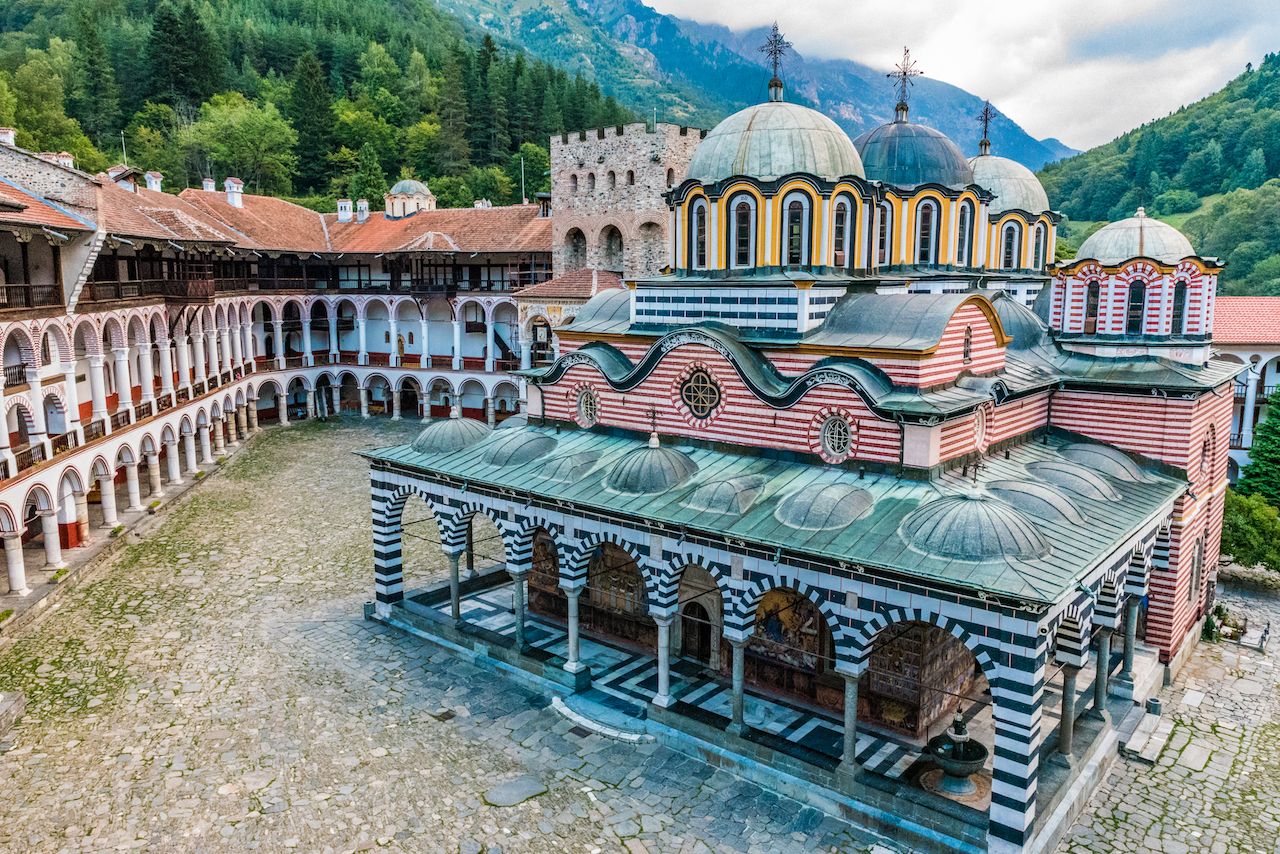 The true beauty of a Balkans road trip is its flexibility. The above framework takes you through seven countries and can be done comfortably in 10-12 days. If you have your heart set on seeing Slovenia, Moldova, and Kosovo, however, and are able to add a few days to your trip, it wouldn’t take much tinkering to make it happen.