On a winding stretch of mountain road between Vuno and Dhërmi, look for the sign for the Monastery of St. Theodore. Follow the road until it turns to dirt, then follow it some more until you find a squat church overgrown with brush. The few other cars parked nearby belong to travelers who have also heard of a pristine beach concealed between the base of the mountain and the sea. An aged attendant will emerge from the church to take your 200 lek (about $1.80) to park for the day, then point a bony finger to a footpath twisting its way further down the hill. Grab your bathing suit, towel, and anything else you might need — you won’t want to hike back up for hours (or maybe ever). For your efforts, you’ll earn a stretch of fine pebbles lapped by crystalline, gentle surf, with only a handful of other holidayers to share the space.

Albania’s best beaches lie in the southernmost region near the border of Greece, with the Riviera generally extending from Vlorë in the north to Ksamil in the south. The country can go toe to toe for most beautiful beaches with its neighbors along the Adriatic, Croatia and Montenegro. But unlike those neighbors, now seemingly on the lips of every beachbound world traveler, Albania’s coastline remains relatively unspoilt. Most of the tourists who do make it to the country come on ferries from Italy or on cheap flights from Germany. Locals express shock at meeting Americans, tipping their heads with a questioning look as if wondering how you got so lost you ended up in Albania. Tell them you’re here for the beaches, then head to one of these seaside secrets. 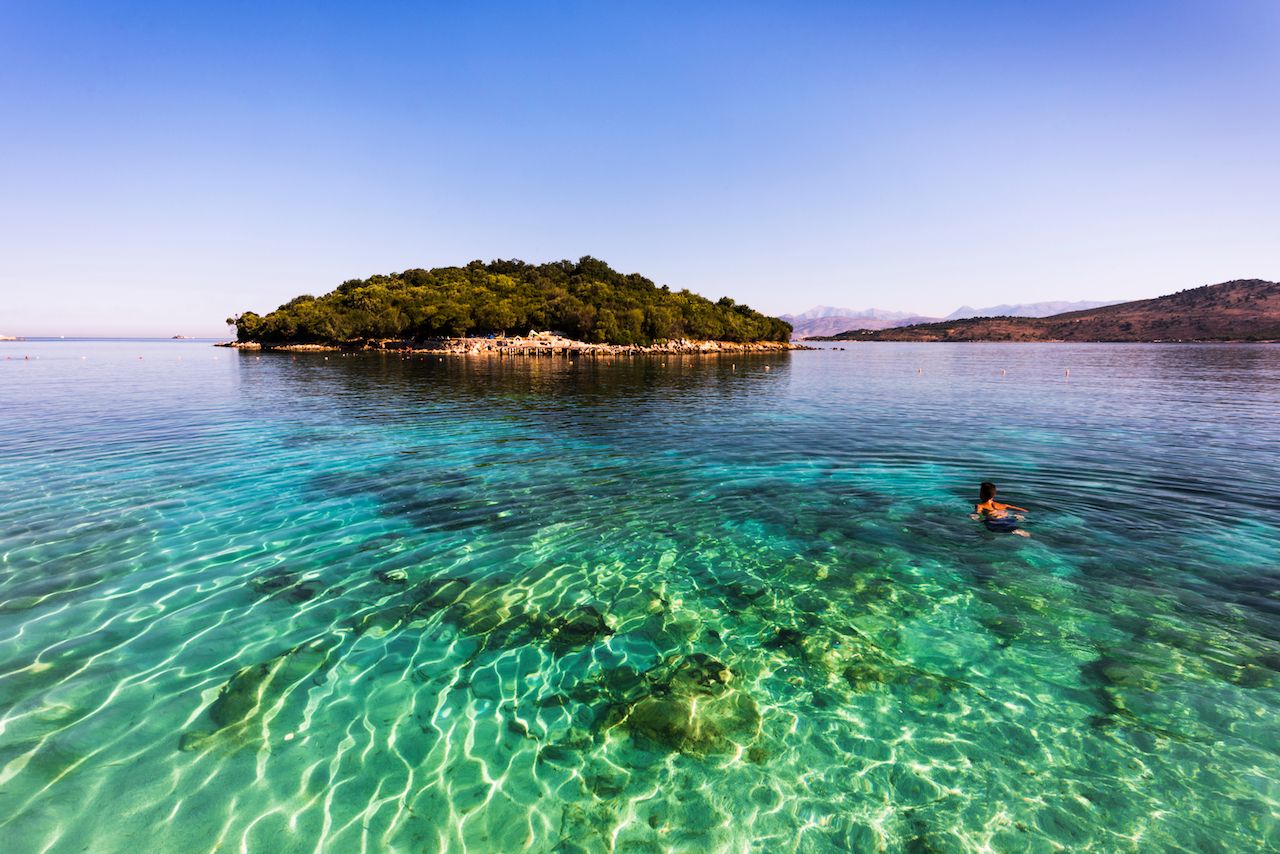 Two international airports serve Albania. One is in the capital, Tiranë, a good four-hour drive from prime coastline. Don’t fly there. Instead fly into the Greek island of Corfu, a short ferry ride away from Sarandë and Ksamil, your first stop in the Riviera. Mostly a family town for vacationing locals from other parts of the country, Ksamil has an utterly homey feel to it, with families flocking to the sea each morning and enjoying gelato and a small amusement park each evening. Many of the hotels surrounding the bay have their own stretches of beachfront with private beach chairs for rent (about 500 lek, or $4.50, for two sunbathers for the day), but the real prize are the islands not far from the coast. You’ll need to hire a boat to get out to the further Twin Islands, but a hearty swimmer can reach the closer ones unaided. During peak summer, a few cafes and bars operate outposts on the islands, but in the off season, you may have the island totally to yourself. 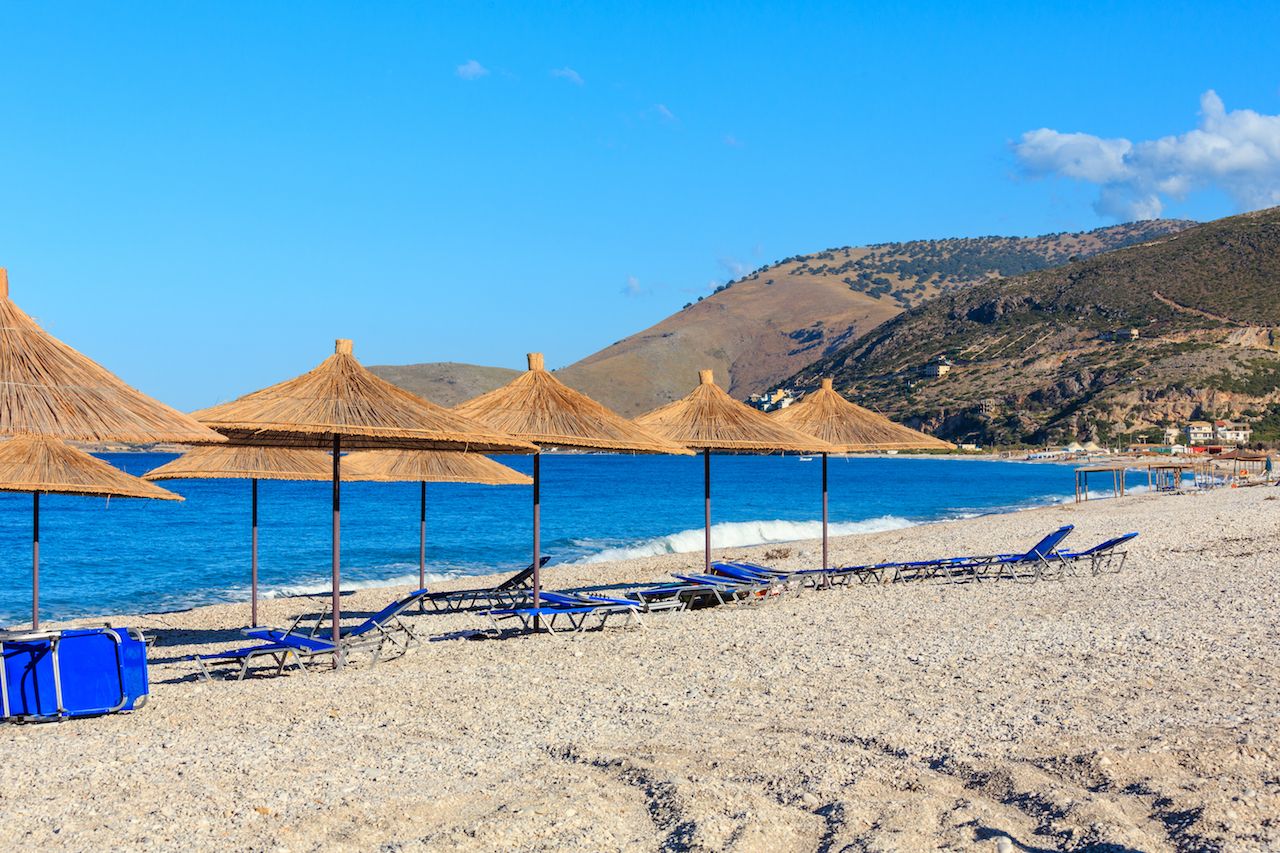 Much of the Riviera is buffeted by mountains, which either run right to the sea or open into thin valleys, allowing just enough room for one small beach town. As you weave the short trip down to Borsh from the main mountain road, you’ll see the beach suddenly fire out in both directions. It’s one of the longest continuous beaches in the Riviera, so it offers plenty of room for stretching out without bumping into fellow sunbathers. Sleep away the day on a lounge chair, or take a long walk to hunt for beach glass (which is plentiful here) without encountering another soul. 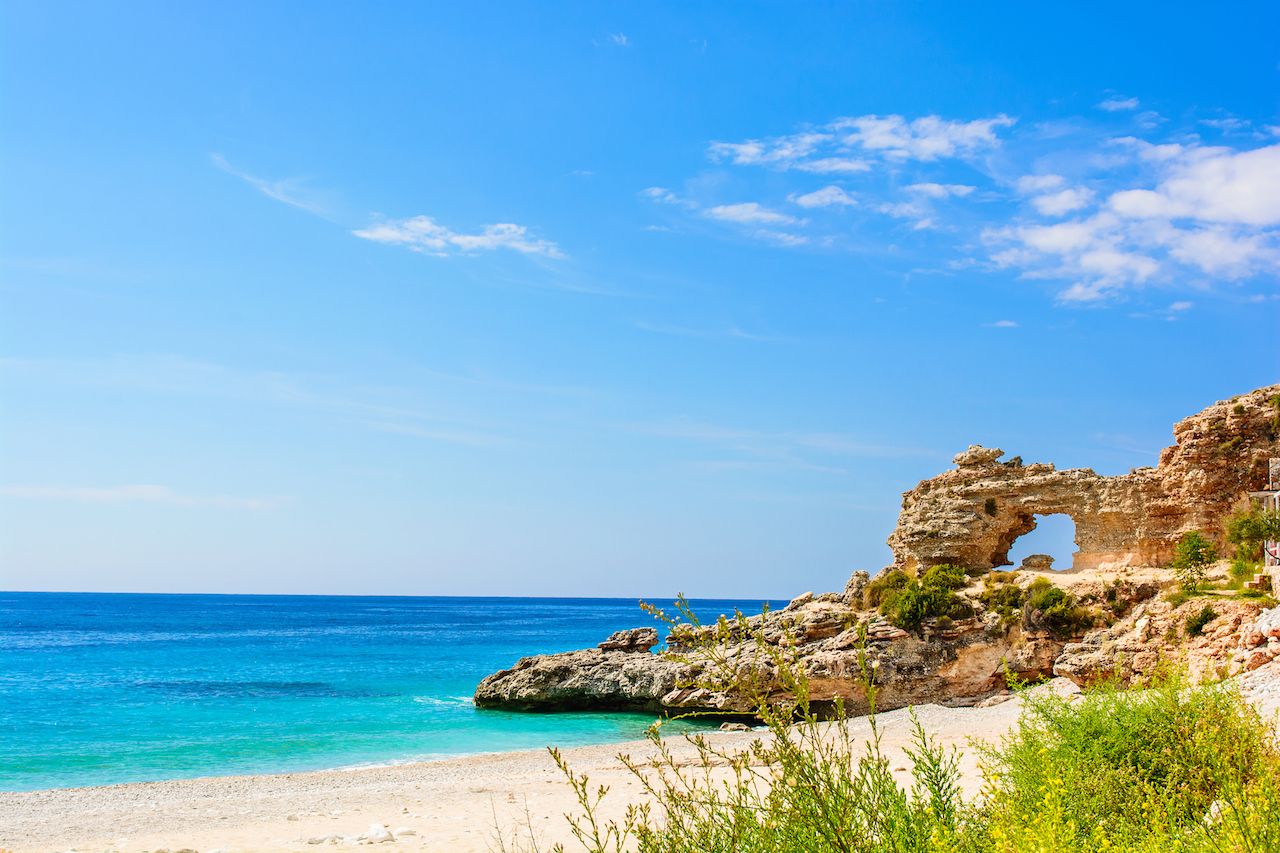 Many of the beaches along the Riviera are populated by interchangeable fish shacks serving a mix of fresh seafood and Italian staples, but Dhërmi offers something slightly more unique to the hungry beachgoer: Pastarella Summer. The outpost of a popular Tiranë restaurant, Pastarella offers an Italian-influenced, seafood-heavy menu that’s simply fresher and better executed than similar restaurants around the area. But don’t expect to wait long for a table; this place is just as chill as any other spot on the beach. 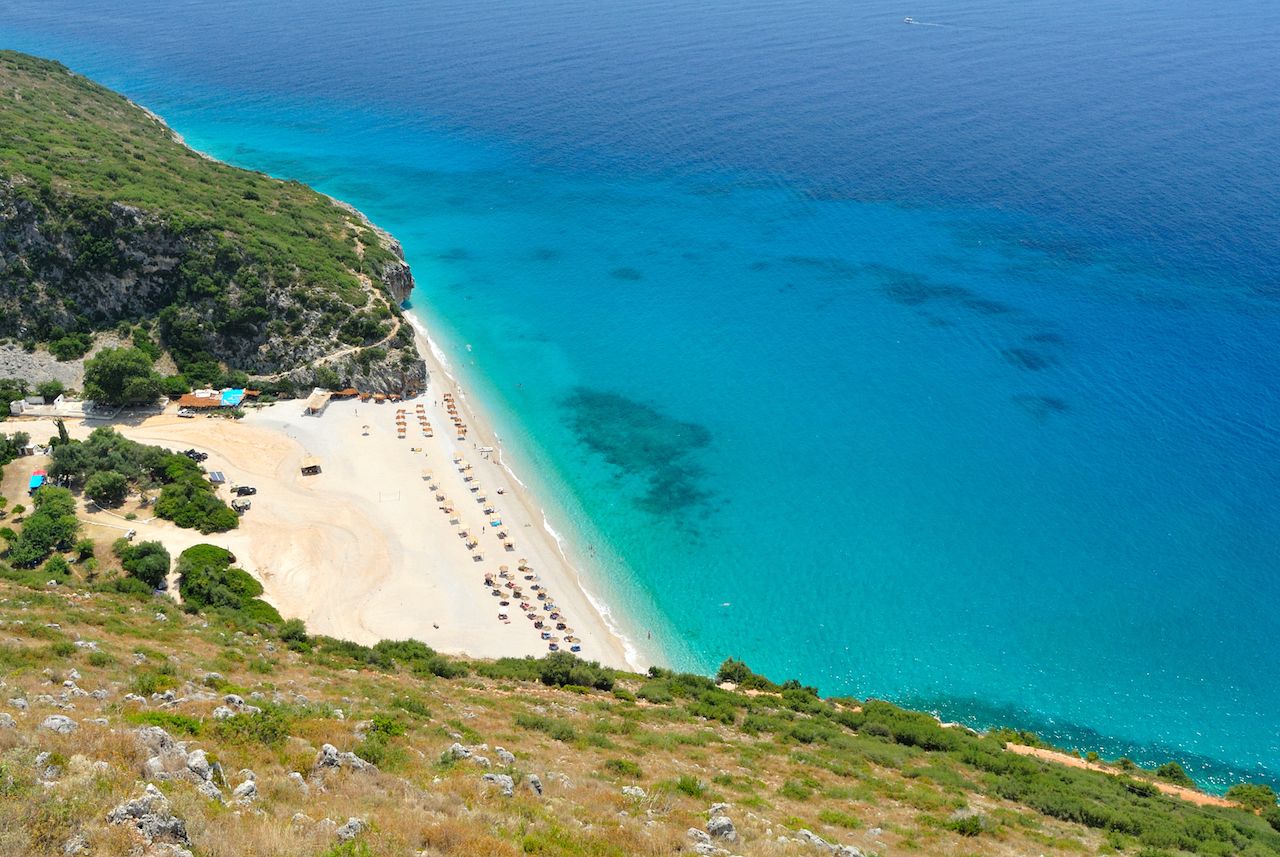 A one-lane dirt road and a short hike maintain Gjipe’s seclusion, but you can skip all that hassle by simply hiring a boat from Dhërmi (just be sure to arrange a return trip before settling in at the beach). A couple of stands serve drinks and small bites, but you’re best off packing a picnic and camping out on a beach towel all day. Once you’ve digested your snacks (no swimming for at least an hour!), swim out to the low rocks along the western edge of the cove, where you can clamber up for a nice view, or go diving from if you’re feeling brave. No one would blame you for spending your entire trip here without ever seeing another beach. 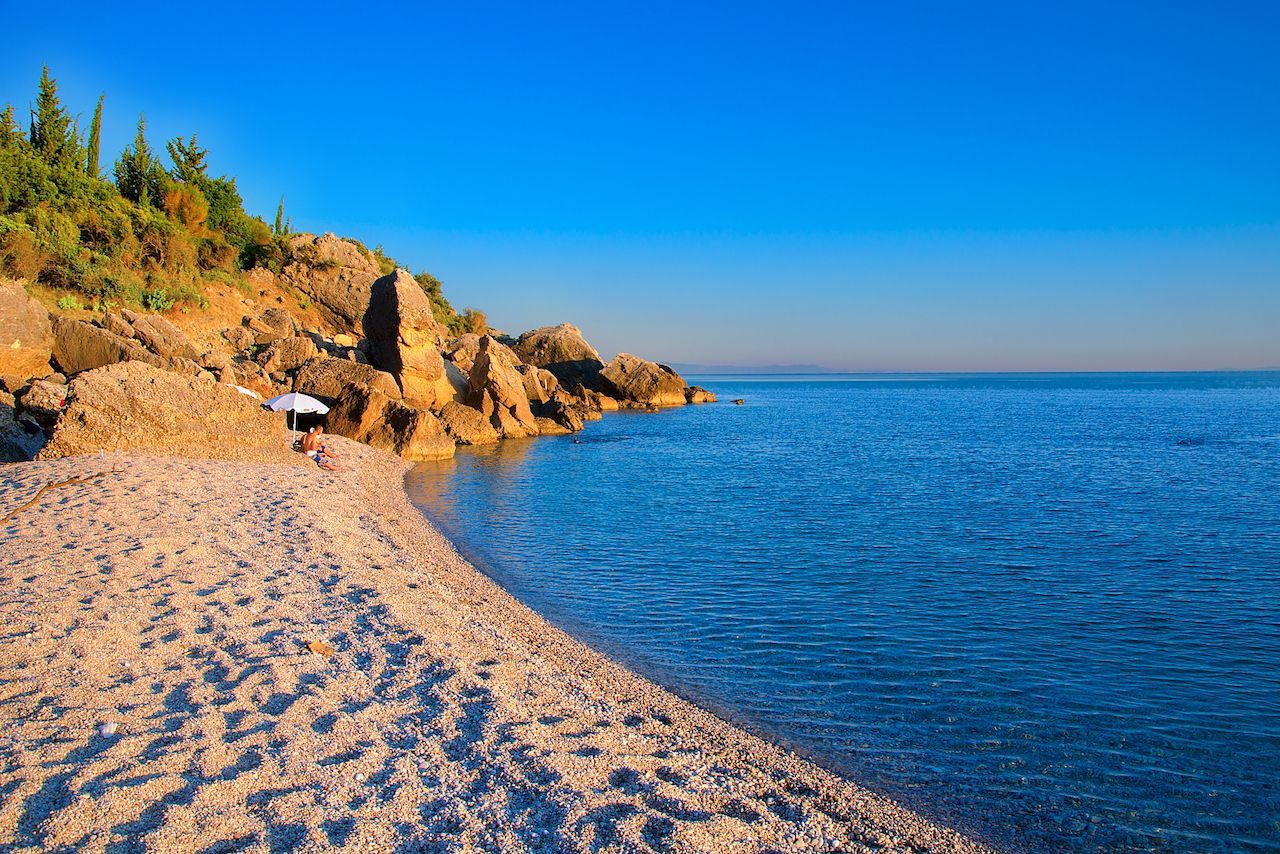 Walking along the beach in Himarë, you could swear you were strolling along a boardwalk in a small American beach town — except in place of ice cream shops you’ll find the best gelato outside of Italy. Couples walk arm in arm, people play with dogs in the sand, families fish on the dock, popcorn vendors sell overflowing bags, and the excellent gelato is worth mentioning twice in as many sentences. Oh and there’s a pretty immaculate, sparsely populated beach where you can take it all in.

Galleries16 Images That Will Convince You To Include Albania on Your Next Europe Trip
Tagged
Beaches and Islands Insider Guides Albania
What did you think of this story?
Meh
Good
Awesome

How To Spend a Mystifying Week in Albania