Walk down the main street of any tourist destination in Mexico, and you will be overwhelmed by tchotchke shops. Key chains, shot glasses, and t-shirts bearing silly and often crude expressions are everywhere you look, with the tenderos (shopkeepers) eagerly beckoning you to come inside and get yourself souvenirs from Mexico.

Though tempting, we urge you to resist: Mexico is teeming with incredible artisans whose works are much worthier of your dollars than anything you’ll find in a discount bin.

Artisanal Mexican crafts and goods are all inspired by, and intrinsically linked to, the land and its history, largely defined by three geographical regions that predate present state lines: the desert, the mountains, and the rainforest. The nature and subcultures of these regions have influenced the creative spirit of the Mexican people; though styles differ between pre-Hispanic, colonial period, and modern craftsmanship, all tell a story that is authentically Mexican.

If you want to take some of Mexico’s spirit back home with you, we recommend finding a “mercado de artesanías”. It is an easy way to shop your way around the country (we love La Ciudadela in Mexico City, for example), but it’s even better to visit the source and buy from and support a maker directly. Here are some of our favorite traditional wares that make for great Mexican souvenirs, and where to find them. 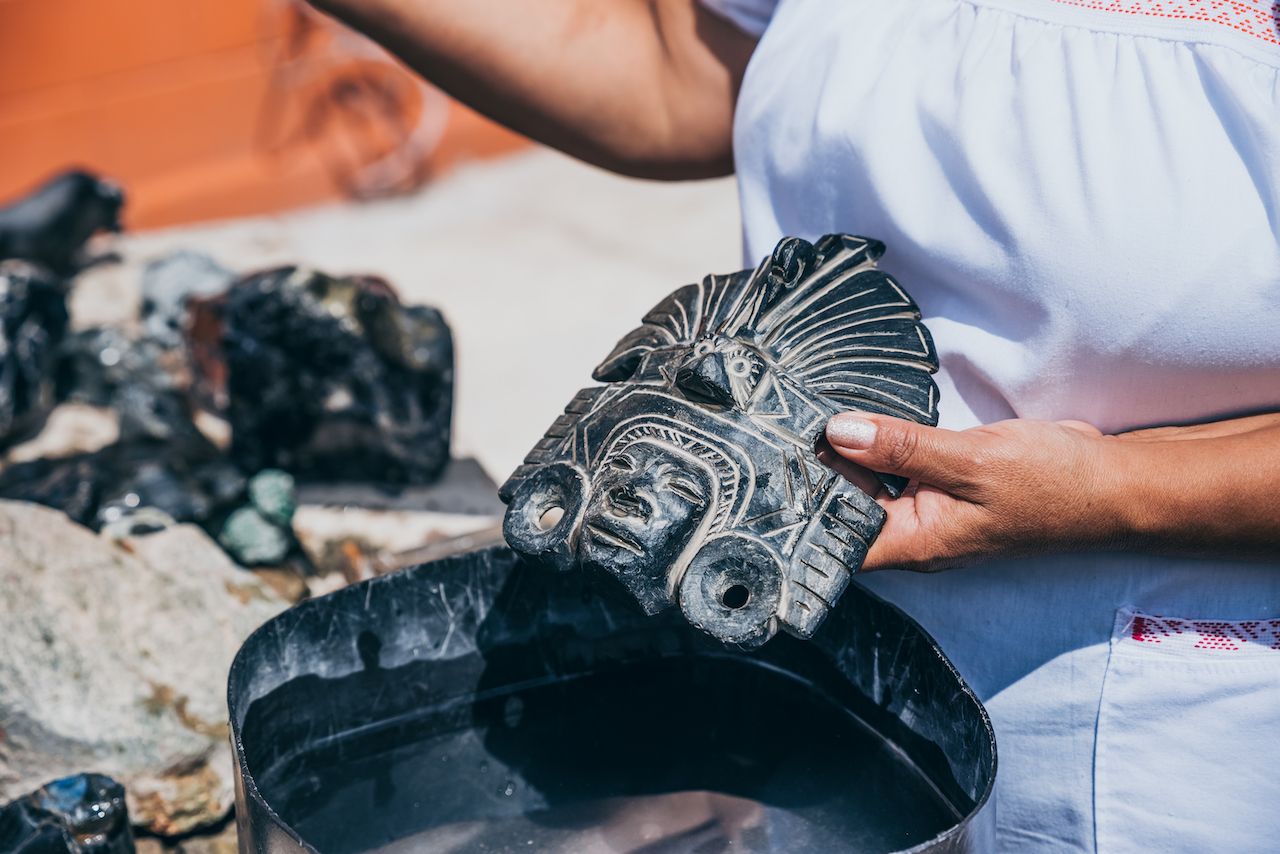 Obsidian is a type of volcanic glass formed from lava. A major export of the ancient city Teotihuacán more than 2,000 years ago, the black, shiny rock was used to make weapons and tools, as well as decorative items such as figurines, vases, jewelry, and masks. Today, obsidian is still found nearby and linked to “The City of the Gods.” Artist Miguel Mestiza Tovar carves rocks from local mines into masterpieces and, in partnership with local tour guide Rodrigo Salas, happily gives tours of his workshop Casa Meztli, located just steps away from the Teotihuacán pyramids. 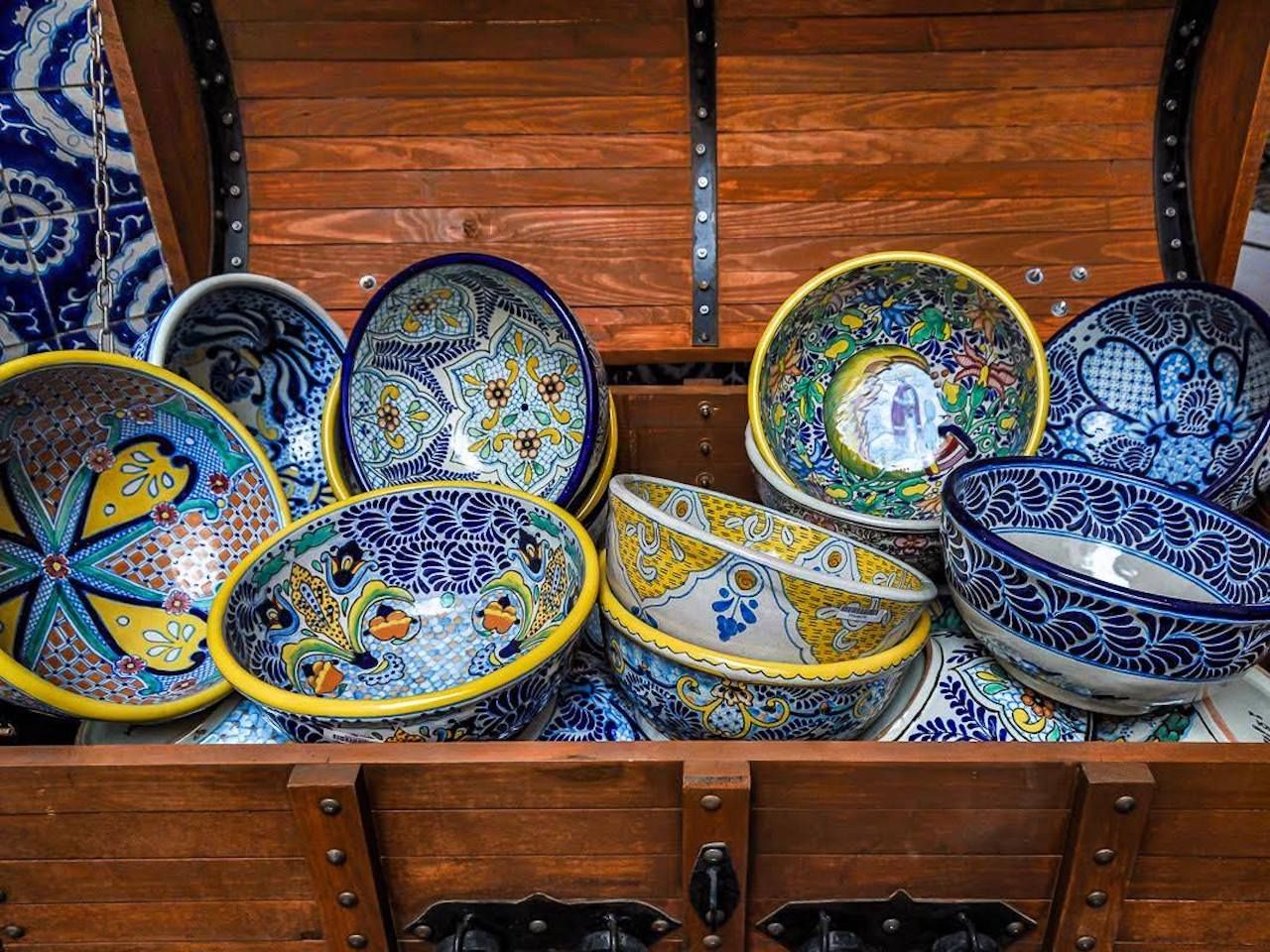 Colonial period and modern craftsmanship from the mountains
Found in Puebla

Though this glazed, ceramic pottery originated in Spain, it has become synonymous with Mexican culture; Poblano culture (from Puebla, MX), in particular. Puebla is currently the largest producer of Talavera in the world, and the best place to find makers of beautiful dishware, pots, and tiles. While authentic Talavera can be crafted in up to six approved colors (blue, yellow, black, green, orange and mauve), you will most often see classic white and blue designs. The color blue was once the most expensive pigment, which made owning Talavera a status symbol, as well as ensured the quality of the pottery. Uriarte Talavera, an exporter and gallery with locations in Puebla and Mexico City, has designs that span from the 16th to the 21st century, all of which are handcrafted by proud Poblano craftsmen. 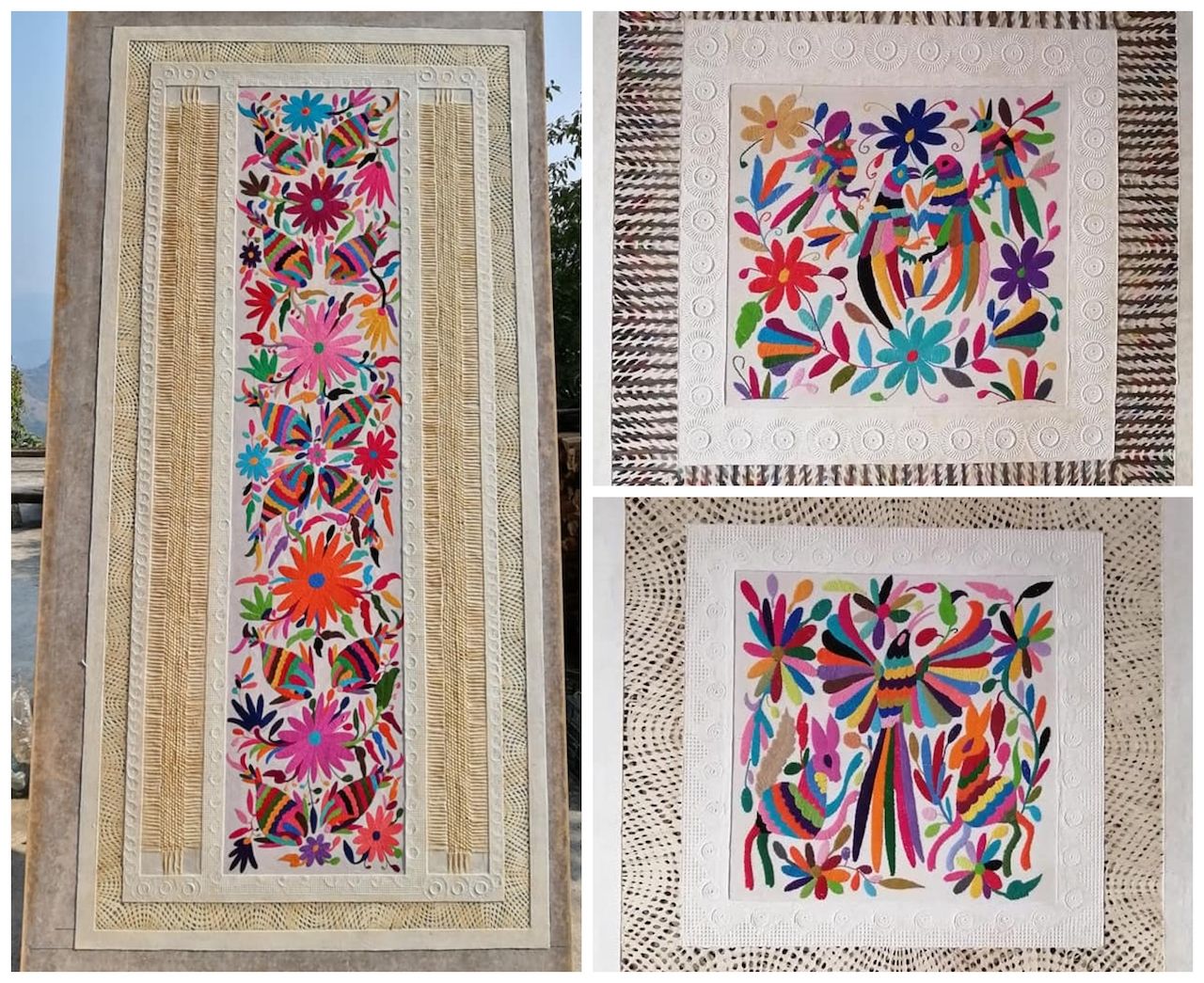 Pre-Hispanic craftsmanship from the mountains
Found in Puebla and Guerrero

Mexicans have been making amate paper from tree bark since the first century. It was originally used as writing paper, but is now primarily a canvas for incredible artwork. Indigenous Nahua artists paint colorful scenes on amate in Guerrero, whereas the indigenous Otomi of Puebla create intricate cut-out designs; the latter style was banned by the Spanish during the Conquest of Mexico after colonizers alleged it was being used for witchcraft. The small Poblano village of San Pablito worked hard to preserve the tradition despite the ban, and is now seen as a top destination for authentic amate. Buy it from San Pablito’s Santos Rojas family, who sell items from their workshop as well as give tours and classes. 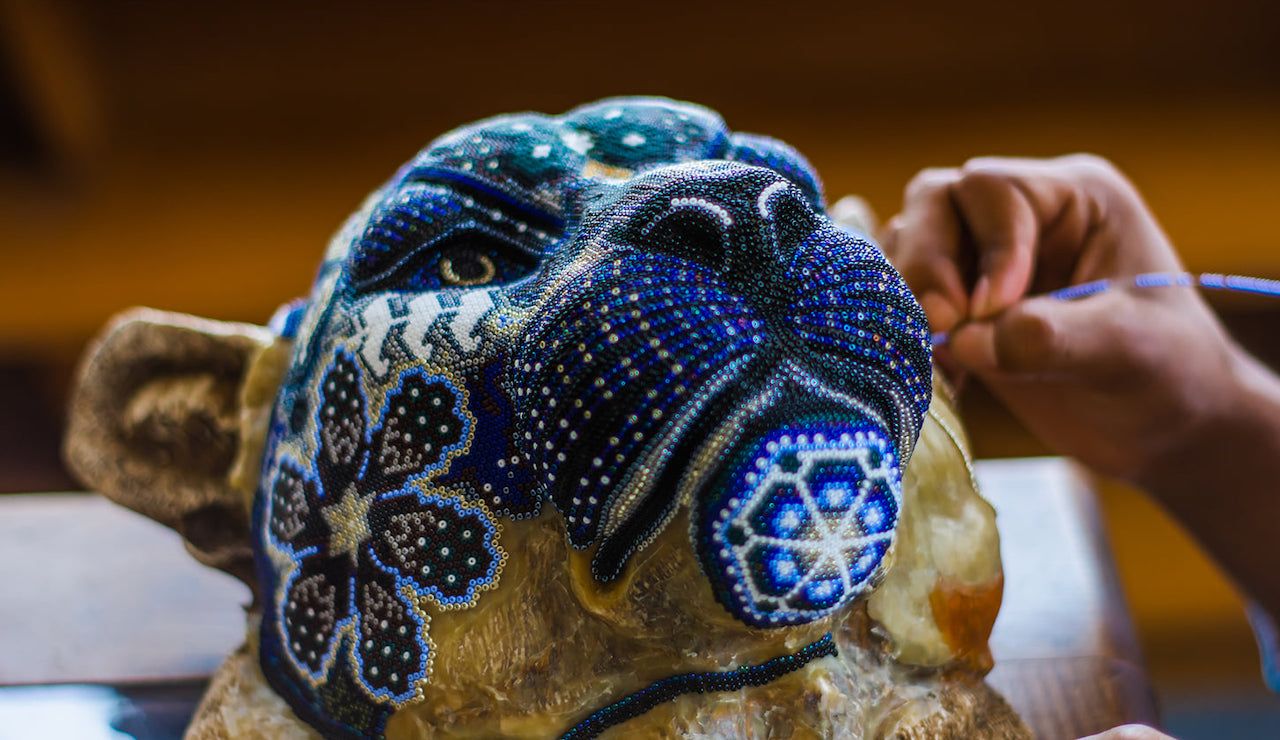 Pre-Hispanic craftsmanship from the desert and mountains
Found in Durango, Jalisco, Nayarit, and Zacatecas

The indigenous Wixáritari people, also known as the Huichol, are arguably Mexico’s most ancient tribe; they are believed to have settled along the Sierra Madre Occidental more than 15,000 years ago and are one of the few ethnic groups to have maintained a firm grasp of their native culture throughout (and despite) colonial and modern times. The Huichol are well-known for their reverence of the hallucinogenic peyote and their gorgeously trippy beaded artwork, which bears the tribe’s name. Brightly colored beads are pressed into beeswax covered wood; figurines, particularly of animals, are one of the most common designs. ​​Tierra Huichol is a gallery and store in popular Puerto Vallarta and Sayulita that displays and sells the original work of eight localWixáritari artists. 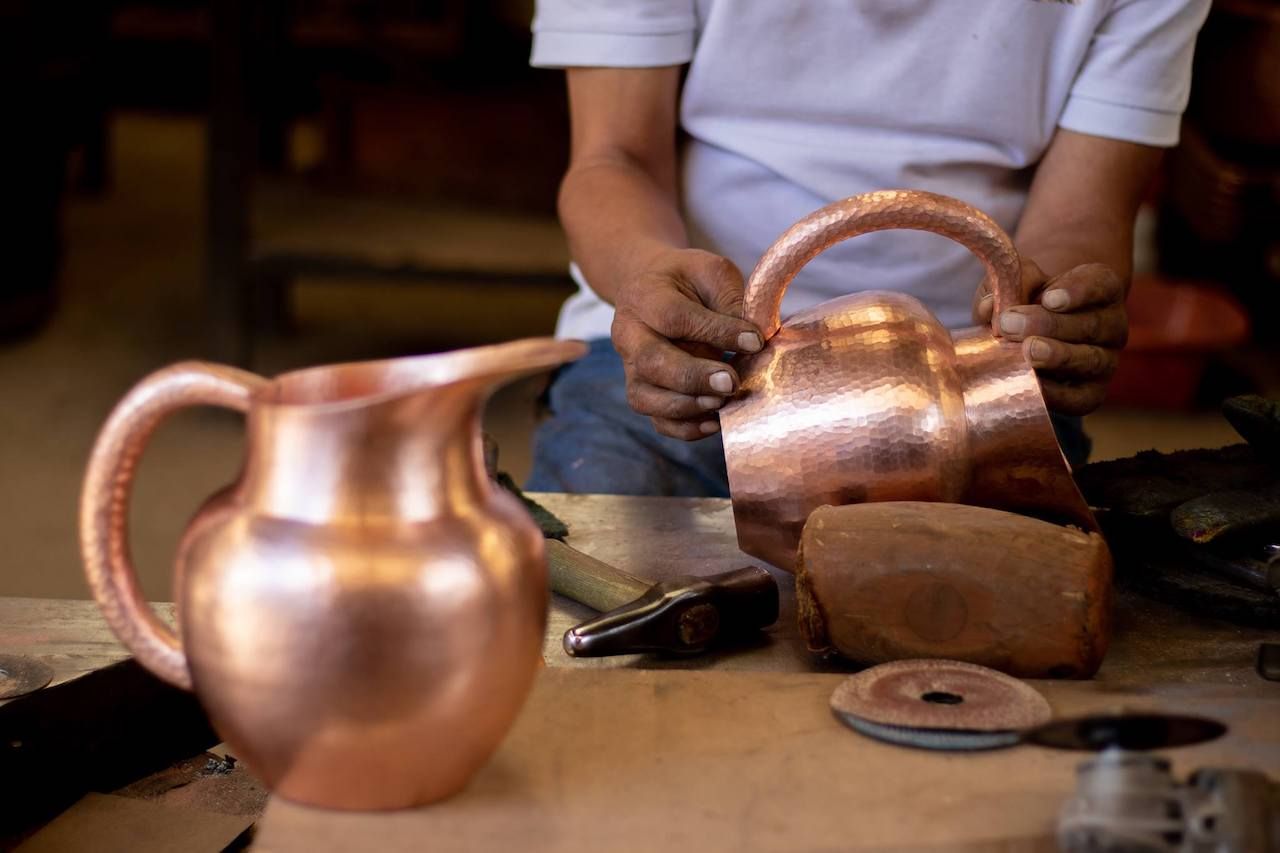 Colonial period craftsmanship from the mountains
Found in Michoacán

Metal working with cobre, which means “copper” in Spanish, was developed during Mexico’s pre-Hispanic period, but became a more prominent craft during the colonial period, when the Spanish pushed for the mining of the lucrative natural resource. The state of Michoacán had the largest deposits and was thus the main site of extraction. Pueblo mágico (“magical town”) Santa Clara del Cobre remains a headquarters of sorts today, with more than 2,000 coppersmiths working across 300+ workshops. The folks behind Cobre Moderno are third-generation master craftsmen, and use their hammers to create expert kitchenware, jewelry, and vases. 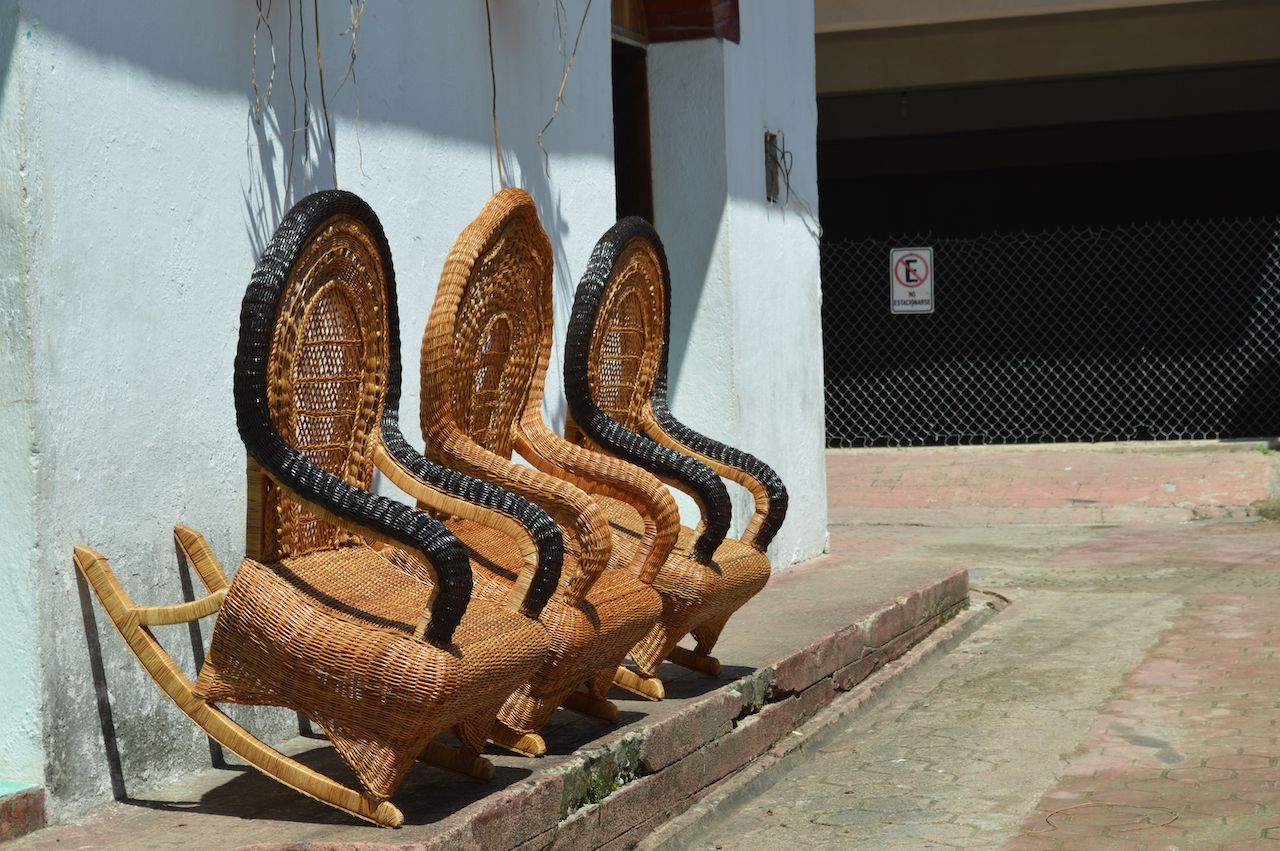 Pre-Hispanic craftsmanship from the rainforest
Found in Tabasco

Basketry is a widespread, ancient craft; in Mexico, it’s said to pre-date ceramics and even the domestication of fire. One of the most common materials used to weave baskets is bejuco, a vine-like plant native to the region. The bejuco vines are extracted and dried in the sun before being peeled, moistened, and woven into baskets. Bejuco furniture has become quite popular; Tabasco’s town of Emiliano Zapata is known for it. Visit Casa de las Artesanías for a great selection. 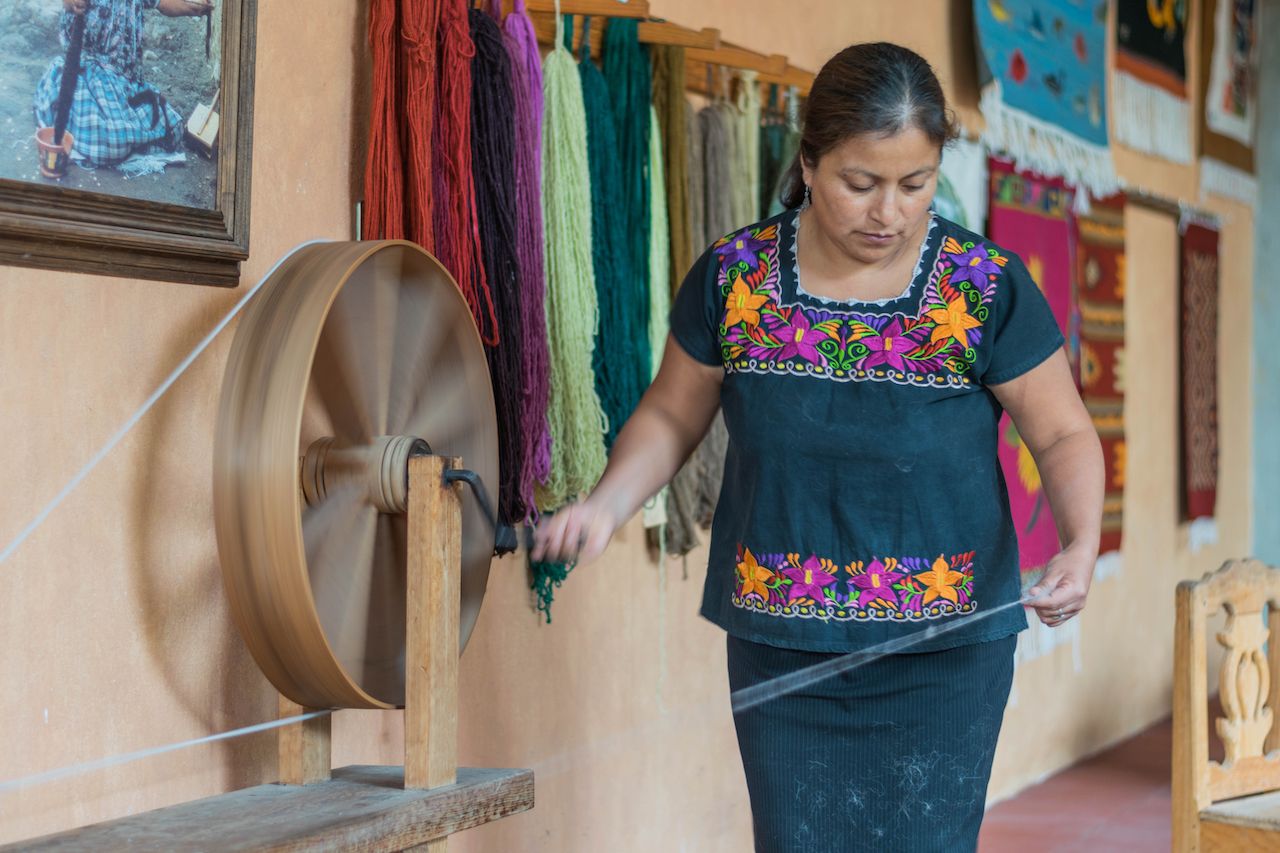 Pre-Hispanic craftsmanship from the mountains
Found in Chiapas, Guerrero, and Oaxaca

Huipil are the classic embroidered blouses and dresses that you see in every Mexican mercado, but they really are commonly worn by indigenous women, even today. In the Oaxacan region Istmo de Tehuantepec, wearing huipil is a huge part of the local identity, to the point where it is referred to as one’s “skin.” The loose-fitting cotton garment can be worn casually, with more intricately decorated pieces serving as formalwear. Istmo de Tehuantepec based Huipil de mi Corazón makes chic huipil for the modern woman and sells them in pop-up shops in Oaxaca City. 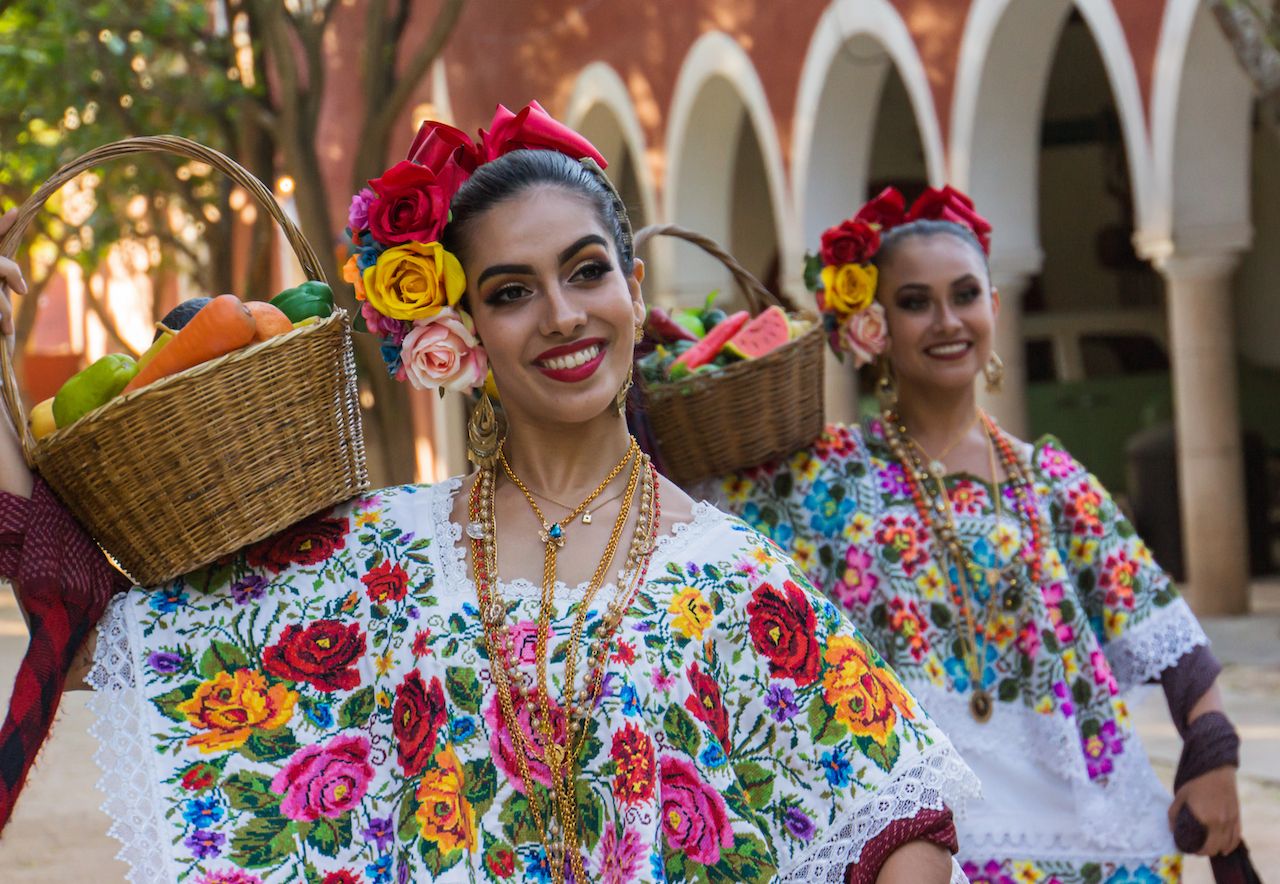 Colonial period craftsmanship from the rainforest
Found in Yucatán

A variation of the traditional huipil, hipil (note the difference in spelling), also known as terno,​​ is more Spanish-inspired in design, and worn by the mestiza women of the Yucatán Peninsula — those who come from mixed Native and European backgrounds. Rather than being one garment, it is often comprised of three parts: the “hipil,” a closed jacket that reaches the knees, the “doublet,” a square flap attached to the neck of the hipil, and the “fustán,” a petticoat type bottom that fastens at the waist. Buy modern style hipil at Hipil Blusa Yucateca in Mérida. 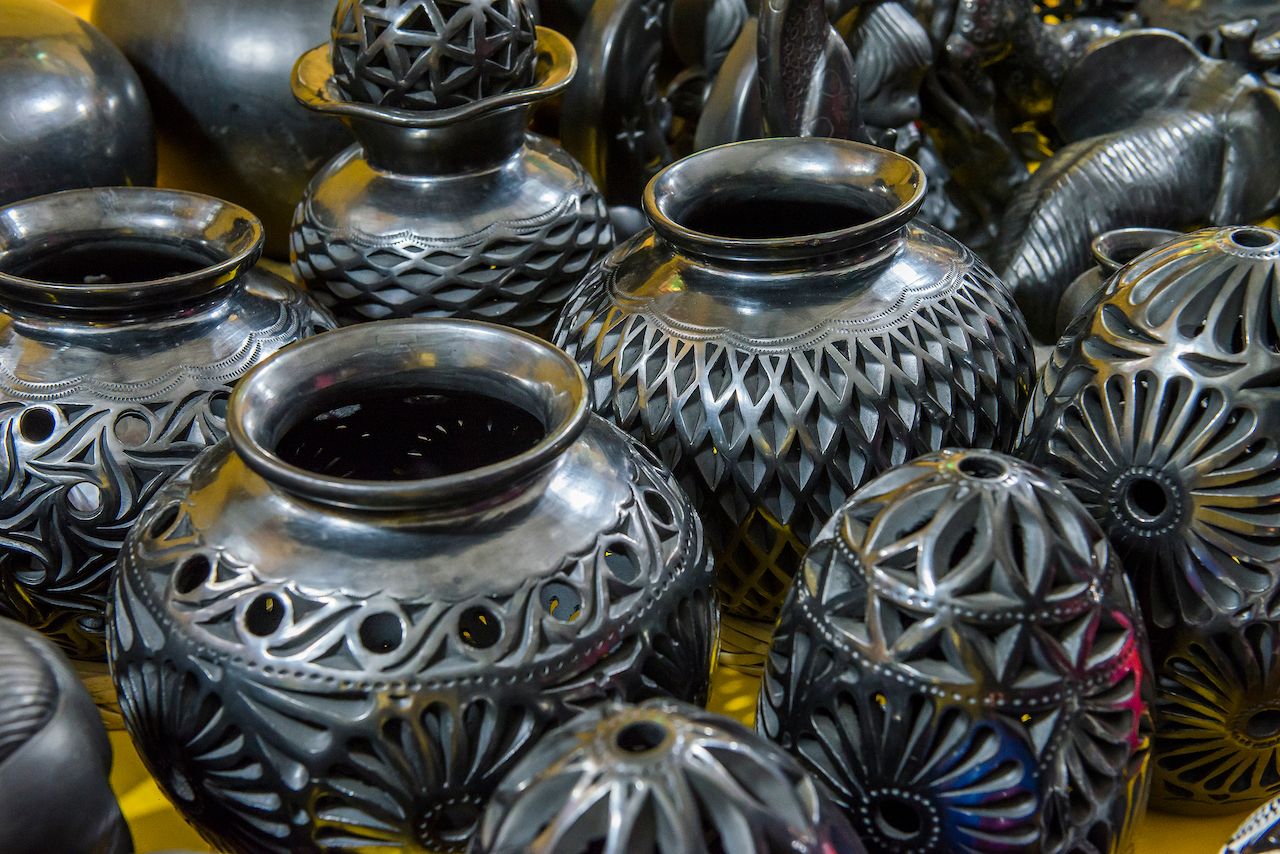 Pre-Hispanic and modern craftsmanship from the mountains
Found in Oaxaca

Barro negro, Spanish for “black mud,” is an ancestral Oaxacan style of pottery that is still used today. The pieces traditionally had a gray, matte finish, and were mostly used for practical purposes, but artists discovered in the 1950s that polishing the nearly dry clay before firing it in the kiln would turn it to a shiny black color, like obsidian. This made barro negro explode in popularity. The town of San Bartolo Coyotepec has been making barro negro pottery for about 2,000 years; all the crafts that Lula’ Naya’ Ni, a merchant at the Mercado de Artesanías, sells are handmade by local indigenous artisans. 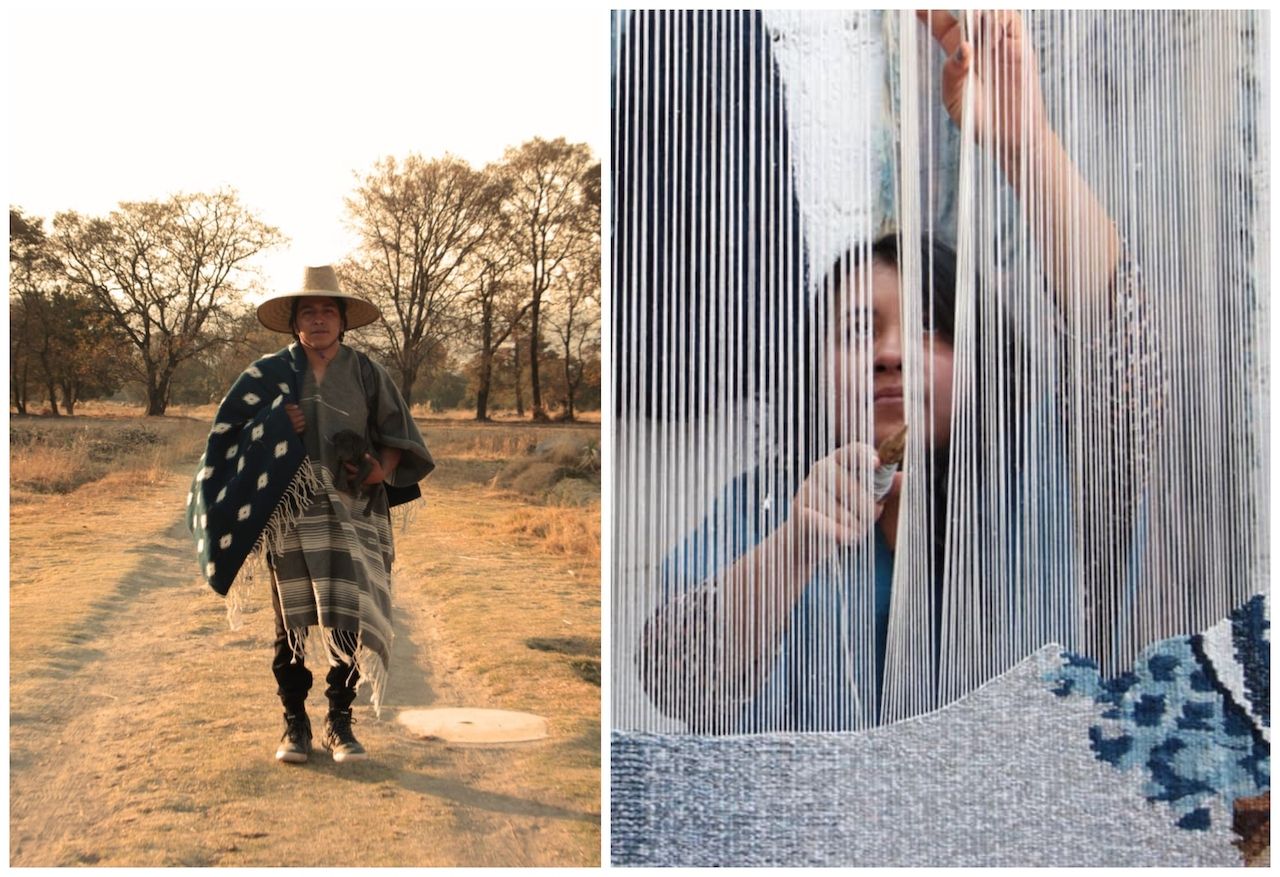 Colonial period craftsmanship from the desert
Found in Tlaxcala, Coahuila, and Jalisco

Sarape, also known as jorongo, is a brightly colored, striped and fringed cloak worn by Mexican men. While traditionally it was woven in one rectangular piece like a blanket, it’s now common to find an opening in the center to put your head through, similar to a poncho. It rose in prominence in Saltillo, Coahuila during the colonial period, and was primarily worn by wealthy men of Spanish descent. They caught the eye of tourists during the 1920s, and by the 1930s, most sarapes were machine-made, rather than woven by hand. The artisans of Taller de Arte textil Netzahualcoyotl in Tlaxcala, however — led by indigenous Nahua artist Ignacio Netzahualcoyotl — are one group that still carefully and proudly makes the textiles by hand. 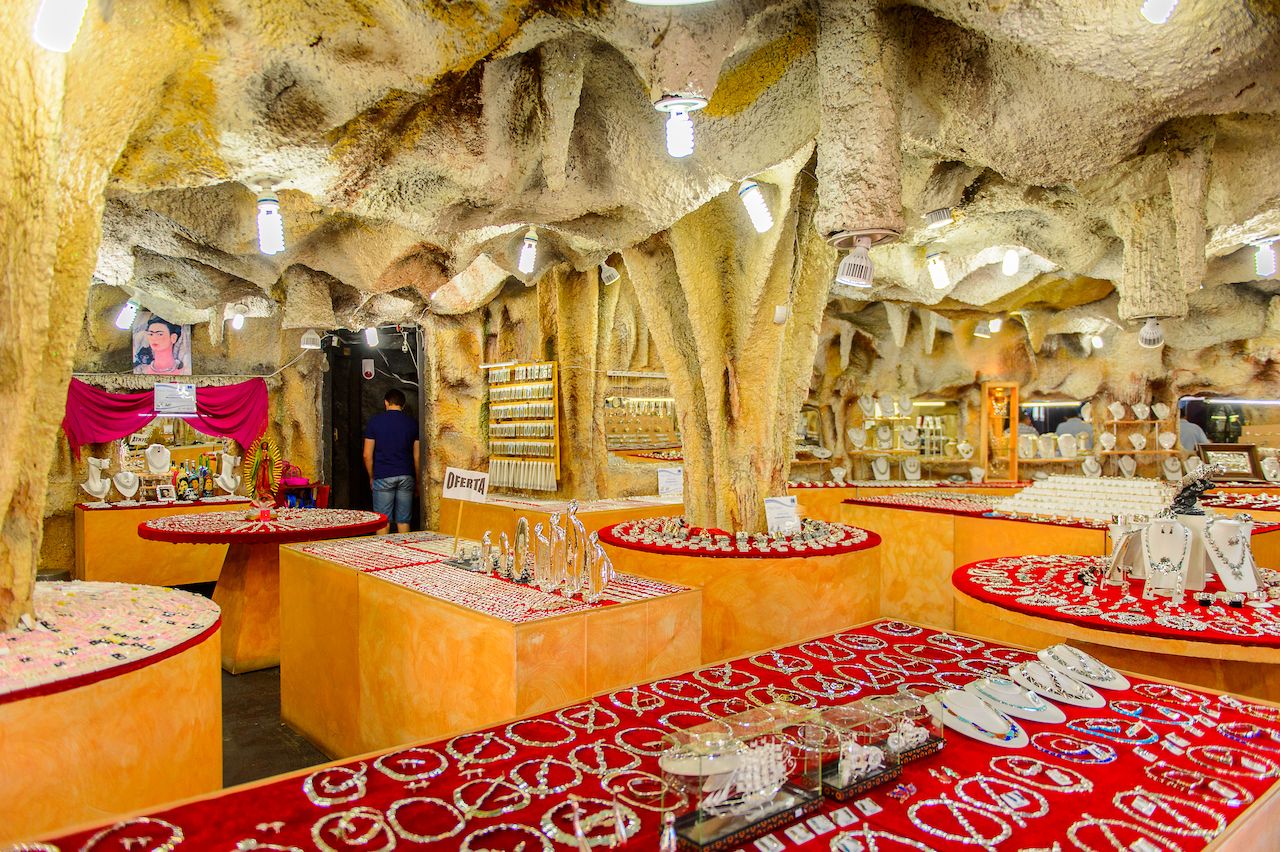 Colonial period craftsmanship from the desert
Found in Zacatecas and Guerrero

Mexico is one of the largest producers of silver in the world. It wasn’t particularly valued during the pre-Hispanic era, but became very popular after the Spainards arrived; many expertly crafted silver pieces from this time period, like dishes and candelabras, are exhibited in museums around the world. Today, more than half of the county’s silver comes out of the state of Zacatecas, making it a great place to buy; the same goes for Taxco de Alarcón in the state of Guerrero known as the silver capital of the world. The town is bursting with silversmiths and platerias (silver shops), so we recommend shopping around for a piece you love. Silver is typically priced by the weight, but do keep in mind that quality can vary: it’s best to only purchase pieces with at least a .925 stamp, meaning it is made up of 92.5 percent Sterling silver and 7.5 percent copper. 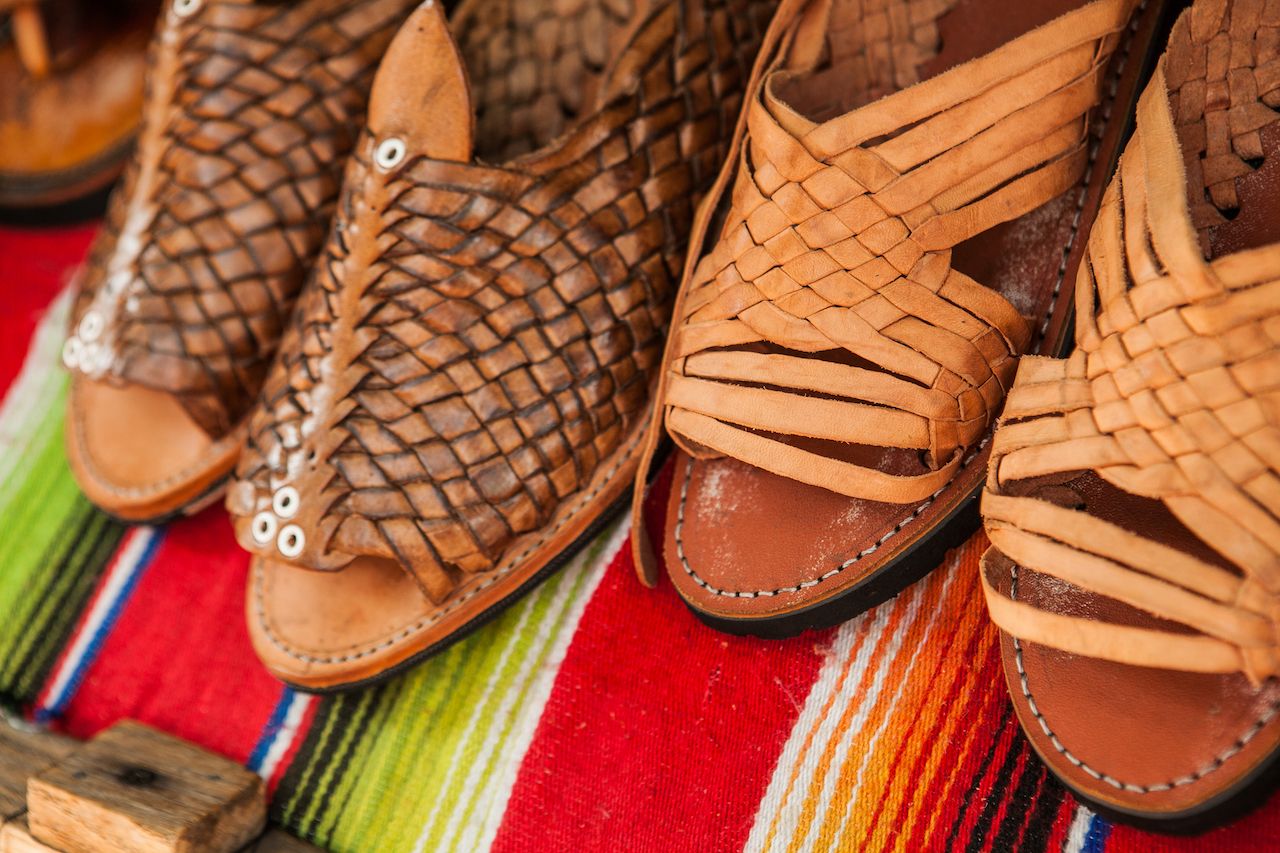 Pre-Hispanic craftsmanship from the mountains
Found in Michoacán and Jalisco

Huaraches are flat, braided leather sandals that were used during pre-Hispanic times to dress the dead; the belief was that the huaraches would help them reach different levels of the underworld. Today, they are popular for casual wear throughout the Americas. Huaraches are made by softening leather in oil and water overnight then weaving the pieces onto the shoe’s sole. Art with Leather in Puerto Vallarta has an excellent selection of authentic huaraches, as well as wallets, handbags, and other leather goods. 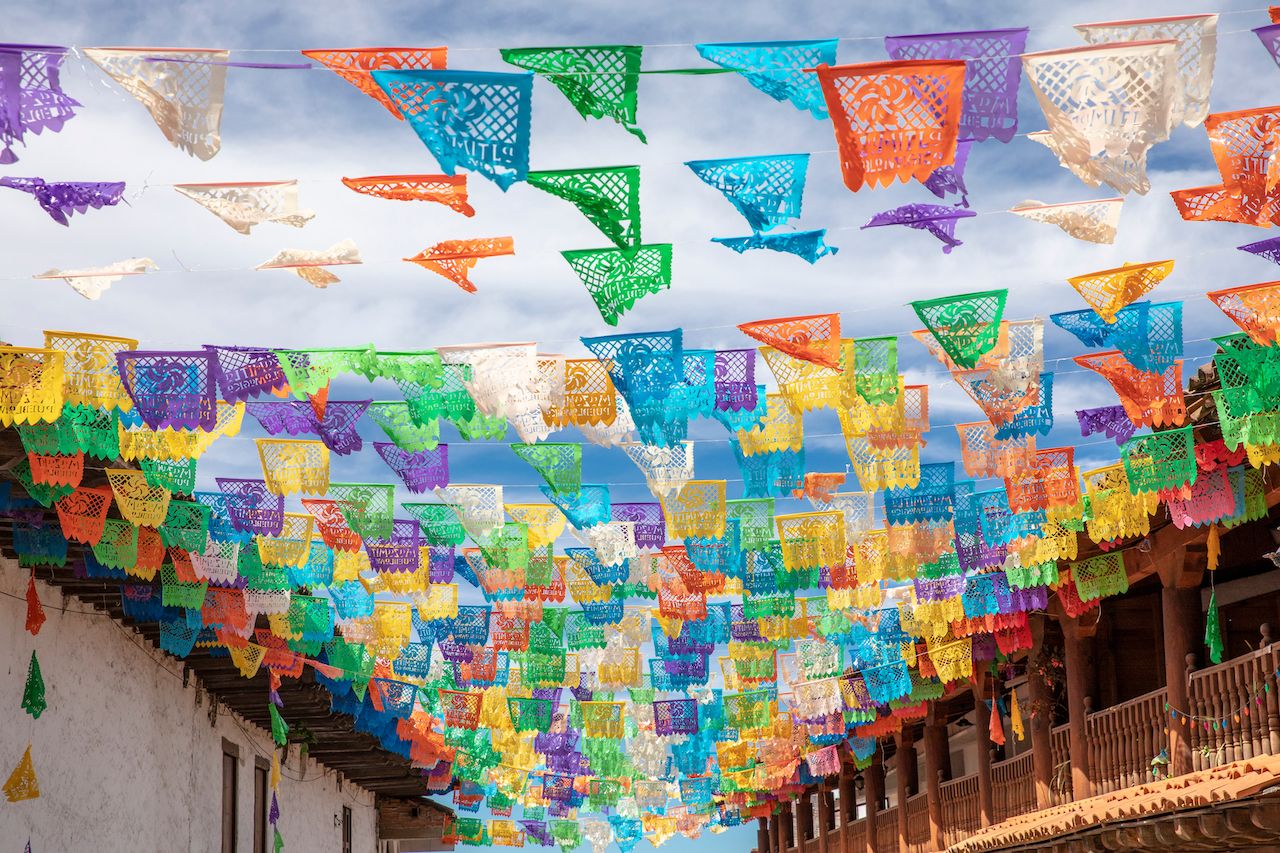 No matter where you buy it, papel picado will likely be the easiest to find and most affordable piece of Mexican folk art available. Artisans use sharp scissors to cut intricate designs into sheets of tissue paper, stringing them together into a banner. It is typically used to decorate ofrendas (altars) for Dia de Muertos, the Day of the Dead, but can also brighten up your home or street year round. A modern take on amate, papel picado originated in Puebla’s ​​San Salvador Huixcolotla. Art and party supply stores selling them are everywhere, though Artesanias Reynoso has a particularly good selection. Papel picado are easy to pack up in your luggage, yet culturally meaningful, making for one of the best souvenirs from Mexico.