For too many people, Ukrainian cuisine boils down to borscht. And while the beetroot soup is hands down a staple, there’s more to the country’s cuisine, which was largely created by farmers and peasants in need of hearty meals. Down-to-earth and filling, traditional Ukrainian food is rich in root veggies, grain, pork, and dairy. Stewed for hours in ceramic pots, sizzling in sunflower oil or lard, and baked in massive wood ovens, traditional dishes use little to no spices but come with abundant sour cream and dill.

While all of that may sound like a vegan nightmare, Ukrainian cuisine is easily adapted to a meatless diet. Because of the endless fasting seasons in Eastern Orthodox Christianity, and because meat and dairy were deemed a luxury, traditional Ukrainian food was often plant-based. So if you shiver at the thought of pork fat, the best time to try Ukrainian food is the Great Lent. Most restaurants offer plant-based menus at that time, including traditional food sans the sour cream.

Regardless of your diet, you’ll find something to your taste in Ukrainian cuisine. Traditional Ukrainian food will surprise and delight your palate. Here are seven dishes are a good place to start if you want to get to know the cuisine of Ukraine. 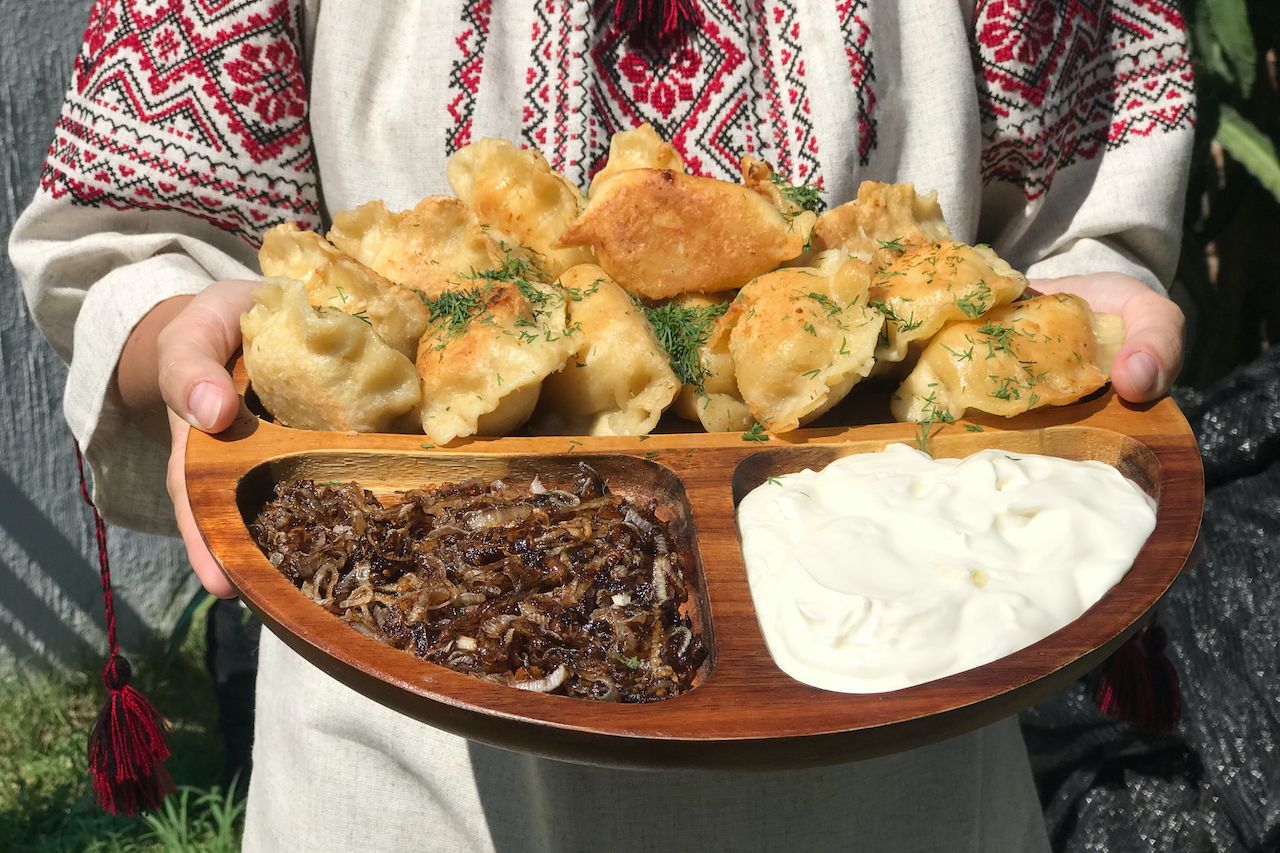 Varenyky are similar to Polish pierogi, a name more familiar to the Western ear. These large, thick dumplings come with all kinds of fillings. Savory ones are stuffed with mashed potatoes, ground meat, liver, sauerkraut, or mushrooms and taste best with crispy onions and fried pork belly on top. Sweet varenyky can be filled with cottage cheese, apples, ground poppy seeds, cherries, and other berries, and they often appear on breakfast menus. No Christmas Eve dinner is complete without varenyky, but because of Lent, the fillings are often exclusively plant-based. 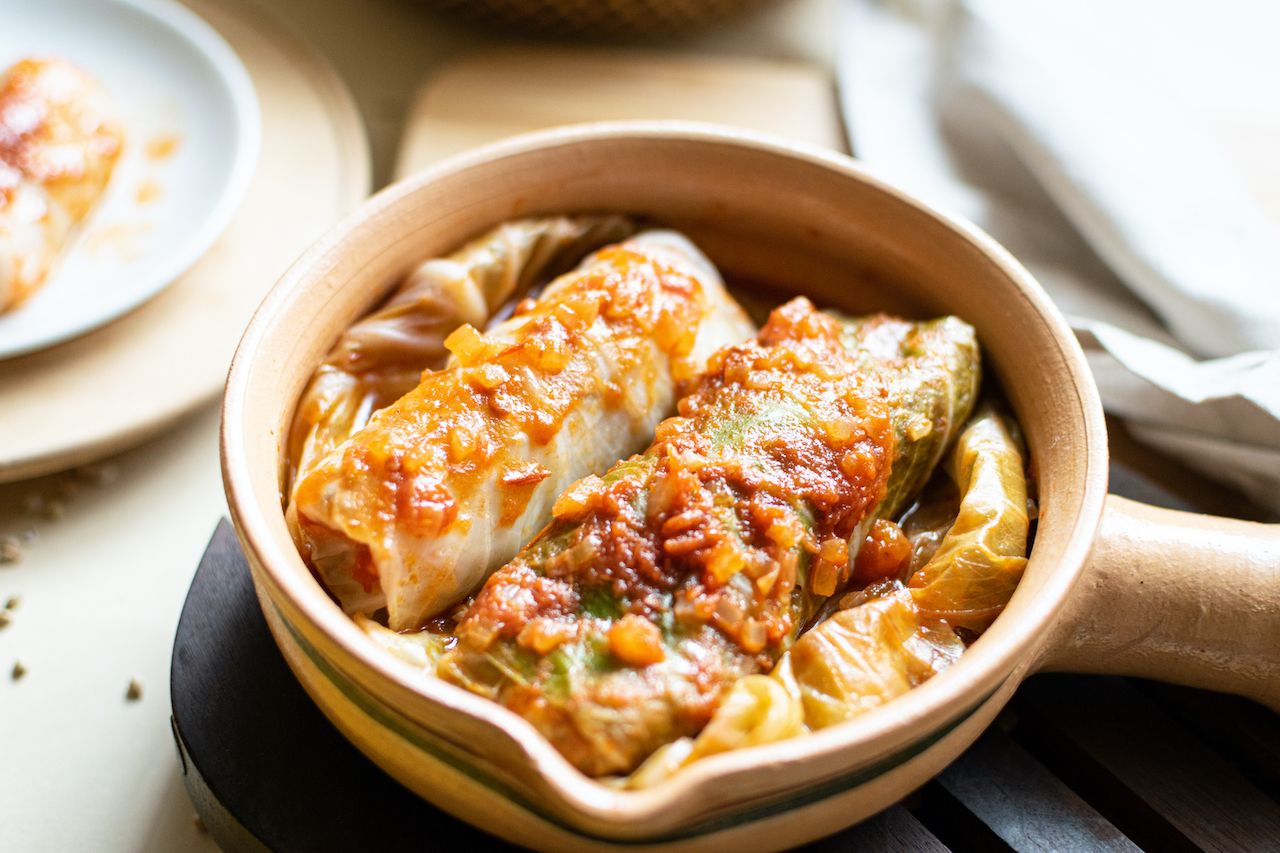 These cabbage rolls, stuffed with meat and rice and cooked in tomato sauce until they turn soft and juicy, are the perfect comfort food. It’s a dish you spend several hours cooking, so this dish is usually prepared in large pots that can last a family for a couple days. A big cabbage is steamed until the leaves turn soggy and are easy to separate, and soft parts of the leaves are then stuffed with rice and ground pork and rolled. Some people like their holubtsi floating in tomato gravy; others serve them with sour cream. Regardless, it usually comes with dill on top. 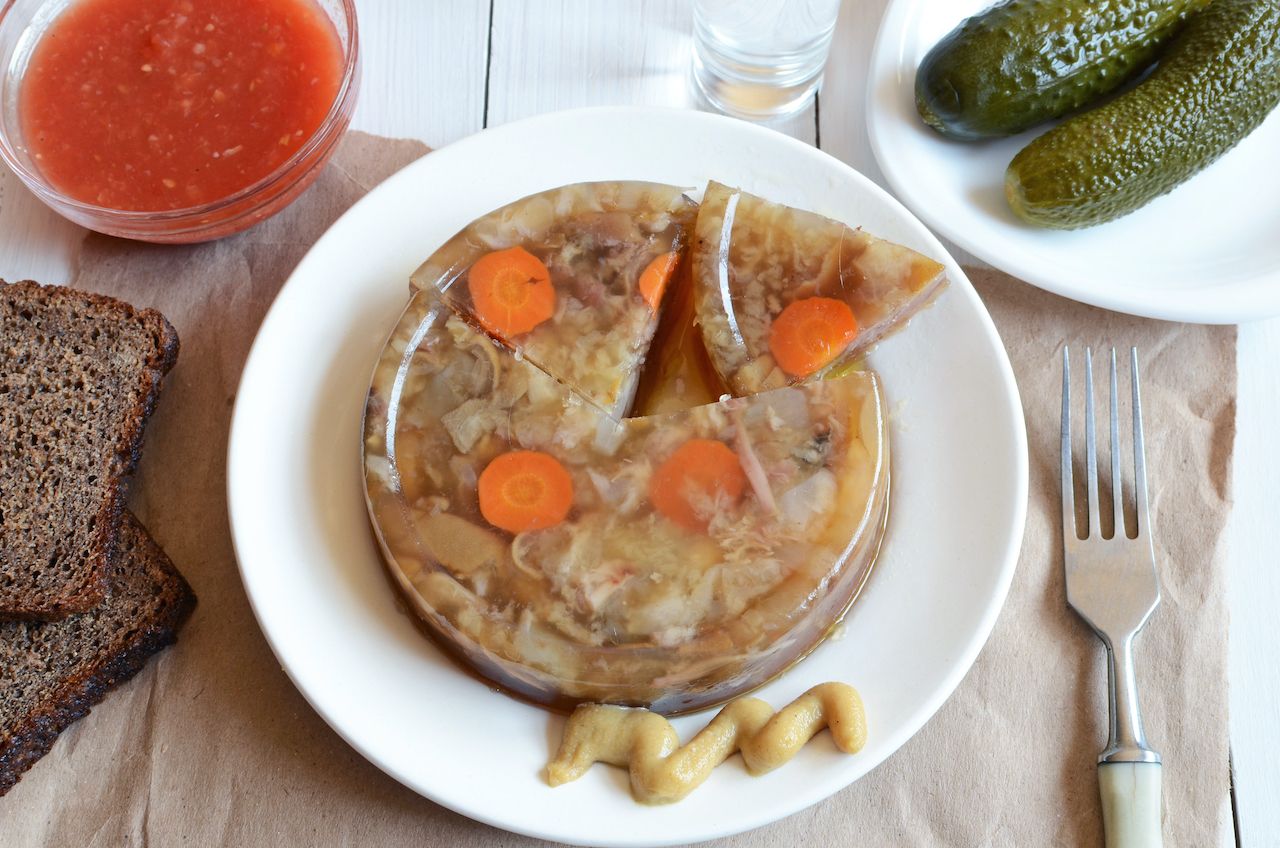 Kholodets is one of the Ukrainian foods that might be least familiar to Americans. This dish resembles Jell-O — except that its made from meat stock. The broth is so thick and rich in natural gelatin that it turns into jelly when put in a fridge. To achieve this richness and texture, a pig trotter (that’s the foot of the pig) is boiled for hours with garlic and meat, and then chunks of meat and the broth are distributed into bowls and cooled off.

The meat jelly goes well with grated horseradish, a Ukrainian condiment that tastes a bit like wasabi. Because kholodets takes so long to cook, it’s considered a treat, and because it’s so rich and needs cold to stay jellified, it’s usually reserved for winter festivities. 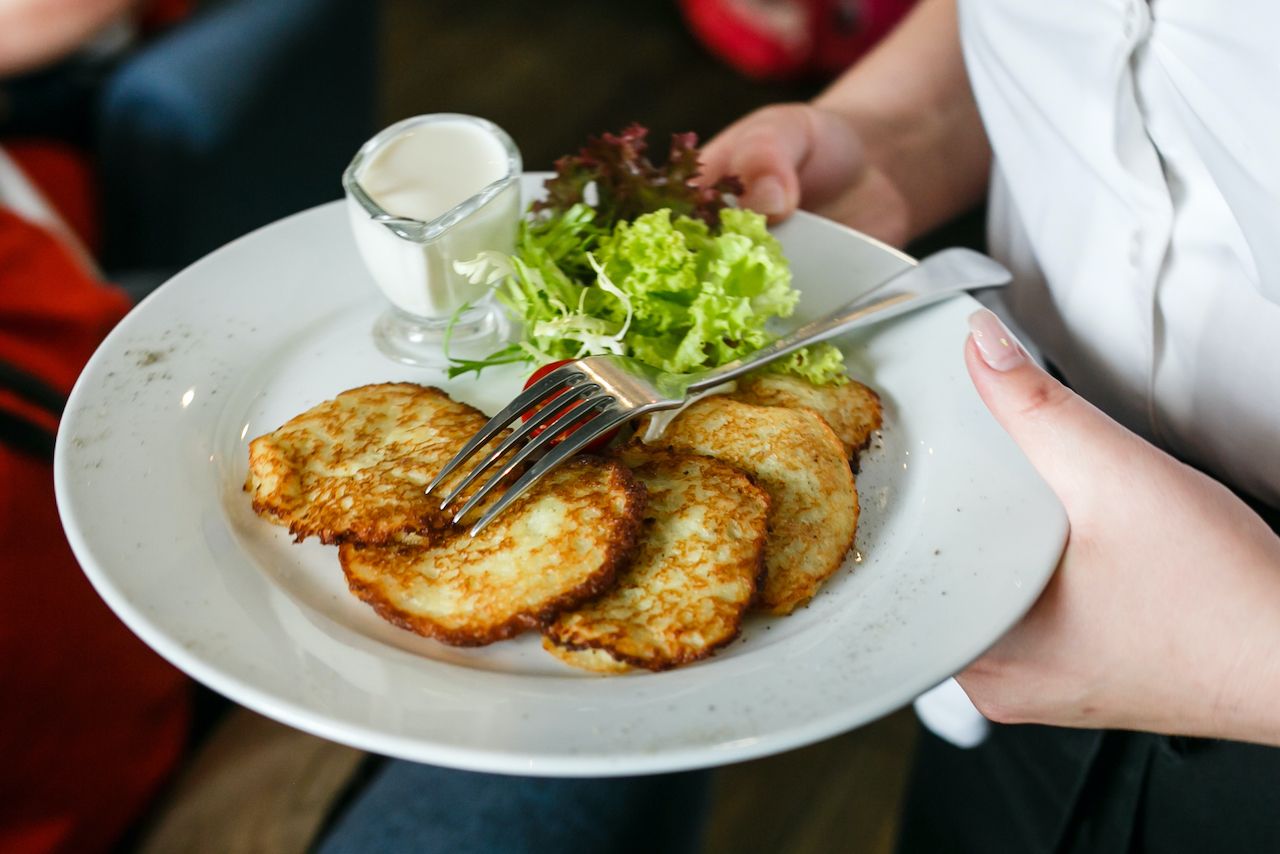 Deruny, latkes, draniki, Kartoffelpuffer — potato pancakes have many names and are popular in Europe and beyond. But Ukrainians have a special place in their hearts for deruny. So much so that a town called Korosten, 100 miles north of Kiev, holds an annual International Deruny Festival. This crispy dish is usually served with sour cream, but you should also try deruny baked in a pot with mushrooms or meat on top. 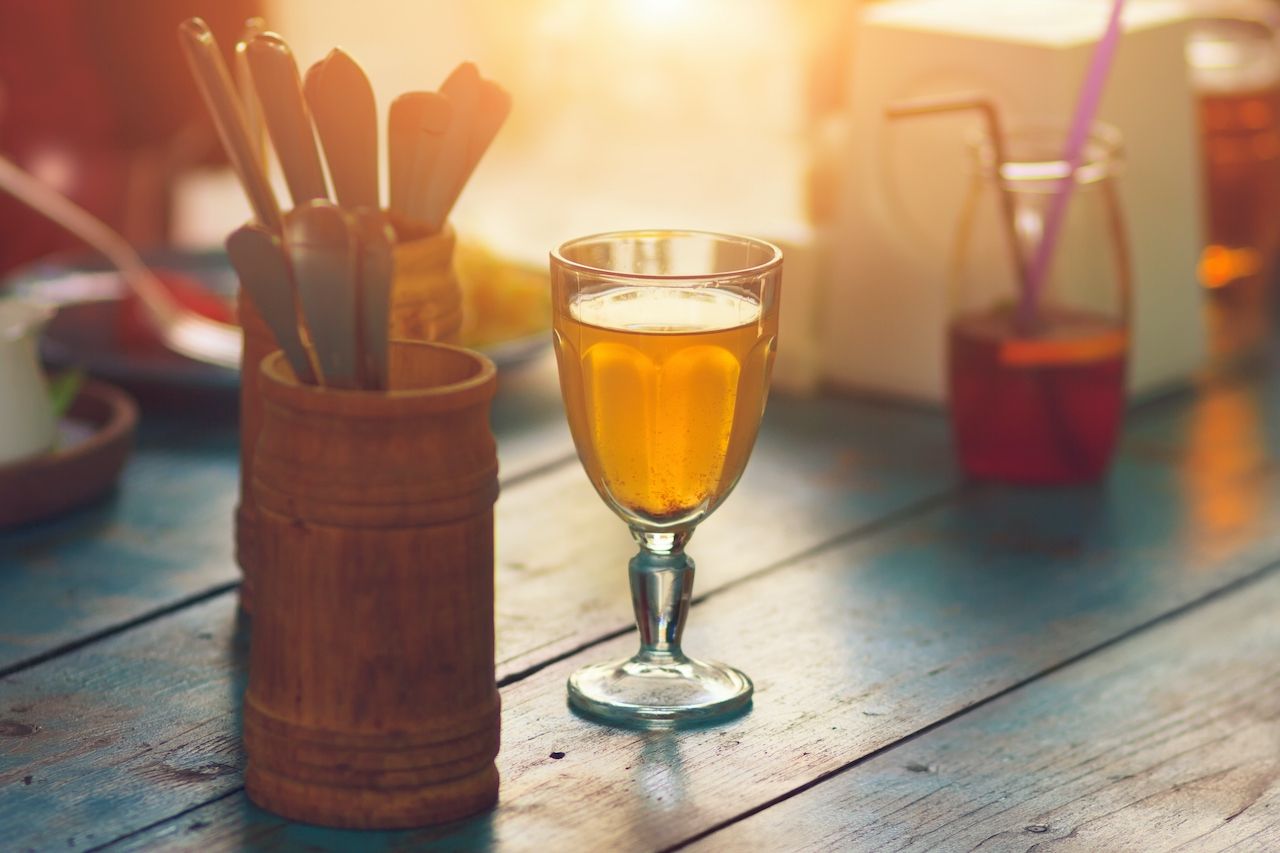 Uzvar is polarizing. This beverage is made by boiling dried apples and pears, raisins, prunes, and honey — the fruit can vary, as long as it’s dried. The resulting brew has a golden-brown color and a sweet-and-sour taste, often with notes of smoke. It’s the smokey flavor that makes the drink hit or miss among people who try it, but if you like prunes and mezcal, you’ll likely enjoy uzvar. 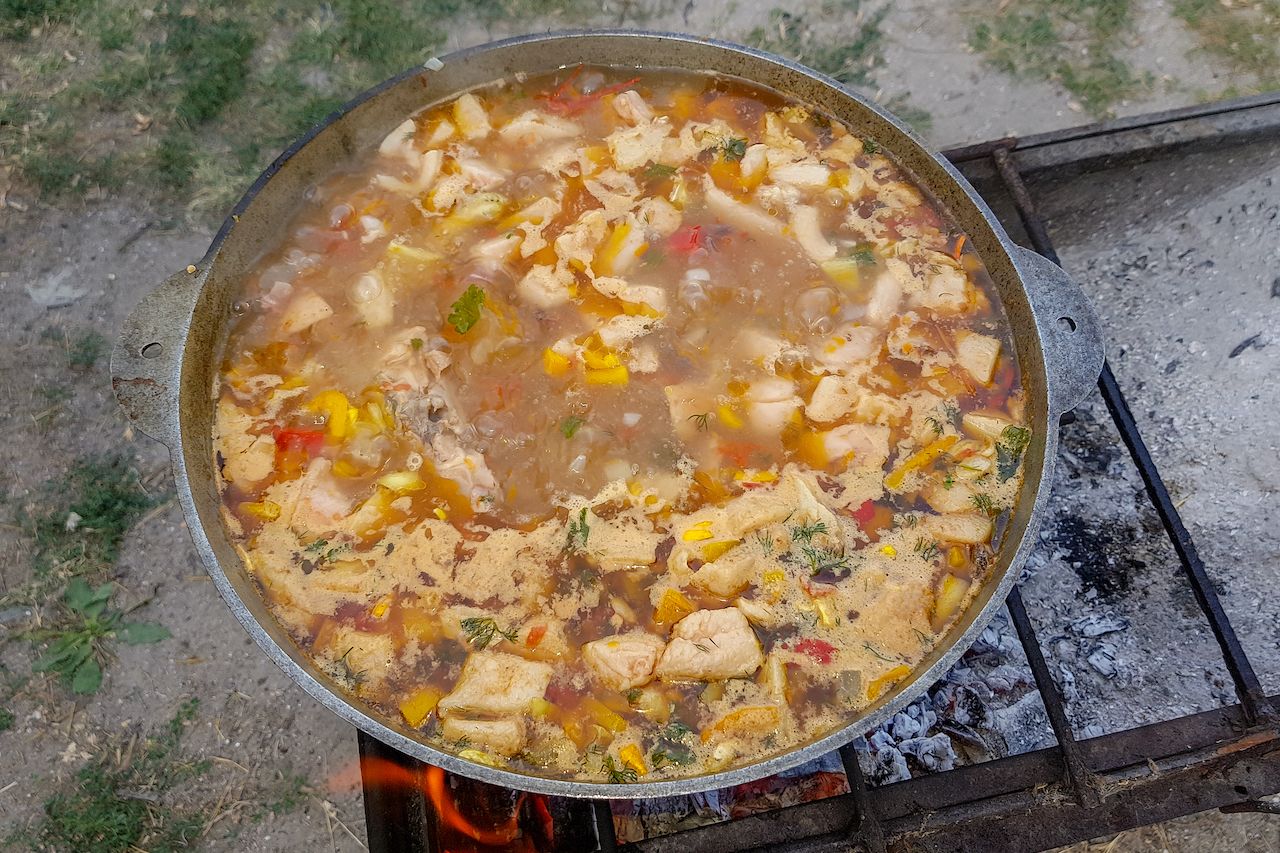 Historically, most of Ukraine’s population was peasants who worked the land and lived off its fruit. However, the Carpathian mountains were populated by shepherds. Thanks to those Carpathian highlanders, called the Hutsuls, Western Ukraine has a cuisine of its own.

Bograch, sometimes also known as shepard’s soup, is one of the most popular and well known Hutsul dishes. Hungarian nomads have probably been eating bograch for thousands of years, and the soup is still popular through the Carpathian region, from Poland to Hungary to Ukraine. This thick goulash-like soup is cooked with meat, potatoes, paprika, green peppers, and tomatoes, and it’s the only somewhat spicy dish in this part of the world. 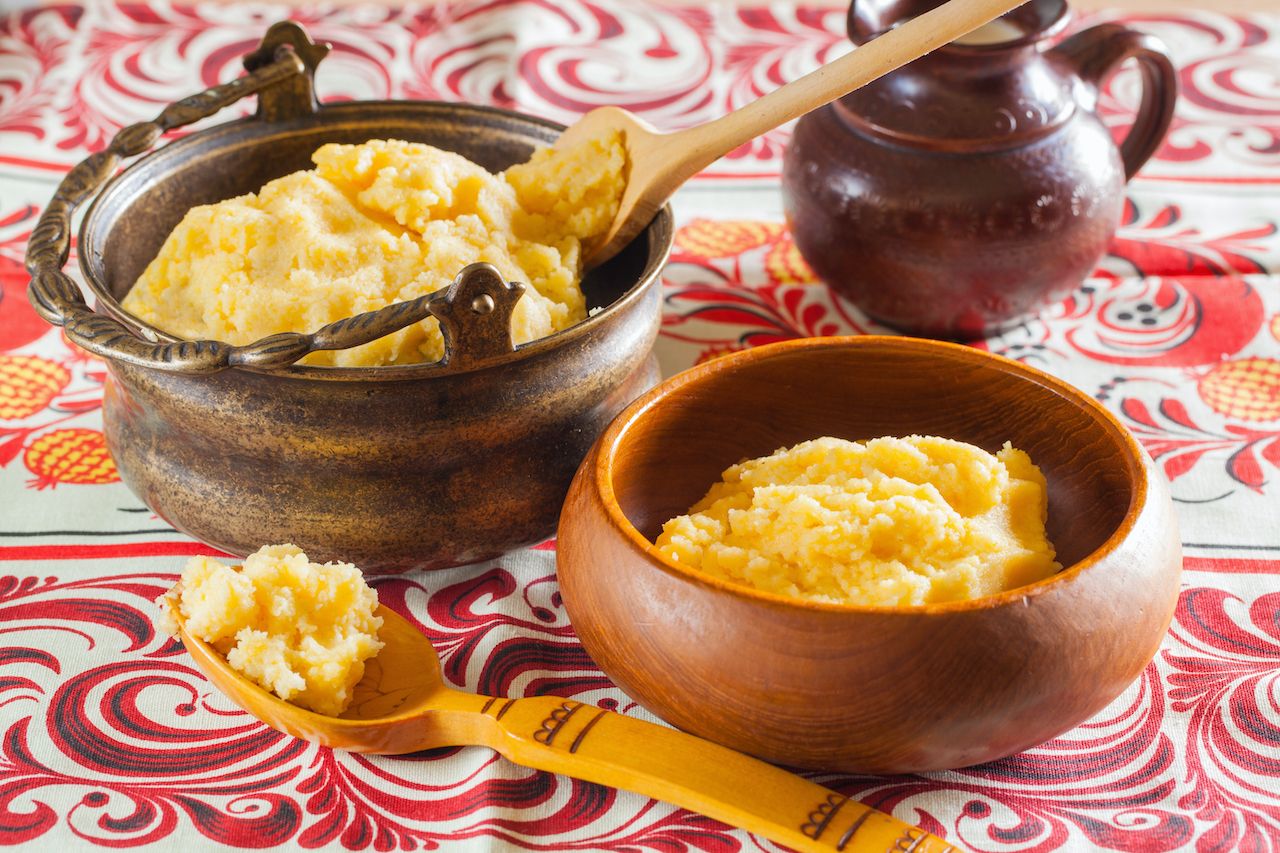 Another Hutsul favorite, banush is a thick cornmeal porridge served with sour cream and bryndza, or sheep milk cheese. According to Hutsul tradition, banush should be cooked on an open fire. The process is simple but requires stamina: Fine cornmeal is added to boiling cream, and when it thickens, it’s vigorously stirred and smashed with a wooden spoon until there are drops of oil on the surface. Banush can come with other toppings, like stir-fried mushrooms or crispy pork belly, but sour cream and bryndza are all-time favorites.

The ultimate eating guide to Kiev, Ukraine
Tagged
Food + Drink Ukraine Kyiv, Ukraine
What did you think of this story?
Meh
Good
Awesome