Belfast has enjoyed a resurgence over the past decade. A stroll through its four quarters will take you from Victorian grandeur to historic docks to contemporary street art and high glamour. This is a city with all the perks of a European capital, accessible at a fraction of the cost. Read below for the ultimate travel guide to getting the best out of Beflast in three days. 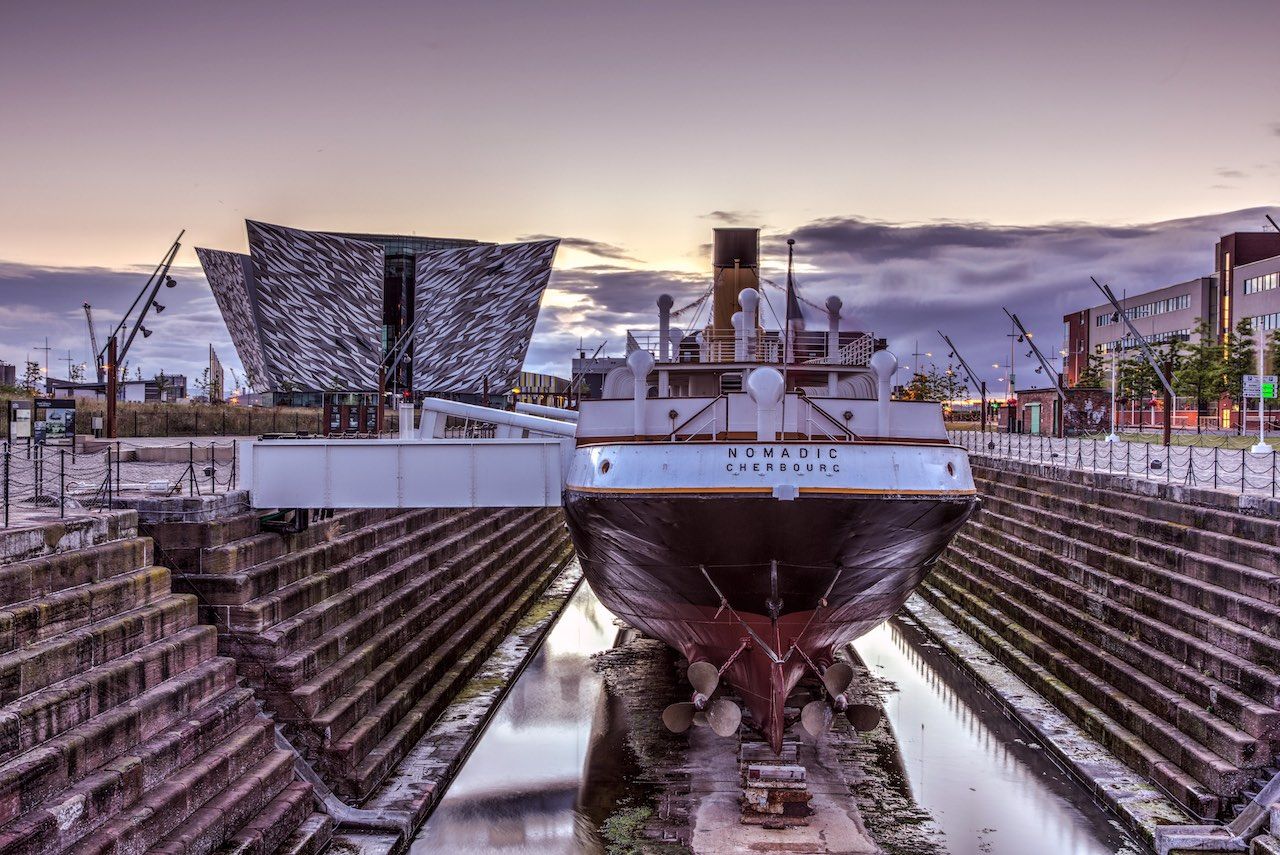 You can’t come to Belfast and not visit Titanic Belfast. Not just because it’s amazing, but also because if you don’t, the many, many references to the famous ship around the city will constantly be reminding you of what you’ve missed out on. If you didn’t know, Belfast’s erstwhile world-leading shipyard built Jack and Rose’s ill-fated liner, and the city is still fiercely proud of this fact. Yes, the vessel succumbed to a pretty infamous disaster, but as the locals say, it was fine when it left Belfast.

Titanic Belfast isn’t just the world’s largest Titanic exhibition — it was recently voted the world’s leading tourist attraction. Situated in the Titanic Quarter of the city (told you folks here are proud of the ship), deep in the docklands, you can’t miss it. Plated in shining silver, the museum itself is a photo-op — some have suggested it was designed to resemble the bow of the ship. The exhibition follows a linear path, taking you on an interactive journey from inception to disaster. You won’t be looking at dusty old displays — this place is totally immersive, and will transport you to the sounds and sights of Belfast in the early 1900s. Give yourself a good few hours to take it all in.

After you’ve finished, jump on The Wee Tram. Tracing the old tramways of Belfast’s docks, it’ll whisk you deeper into this proud pocket of Belfast’s history (plus the tour guides are as cheeky-but-charming as you could ever want). 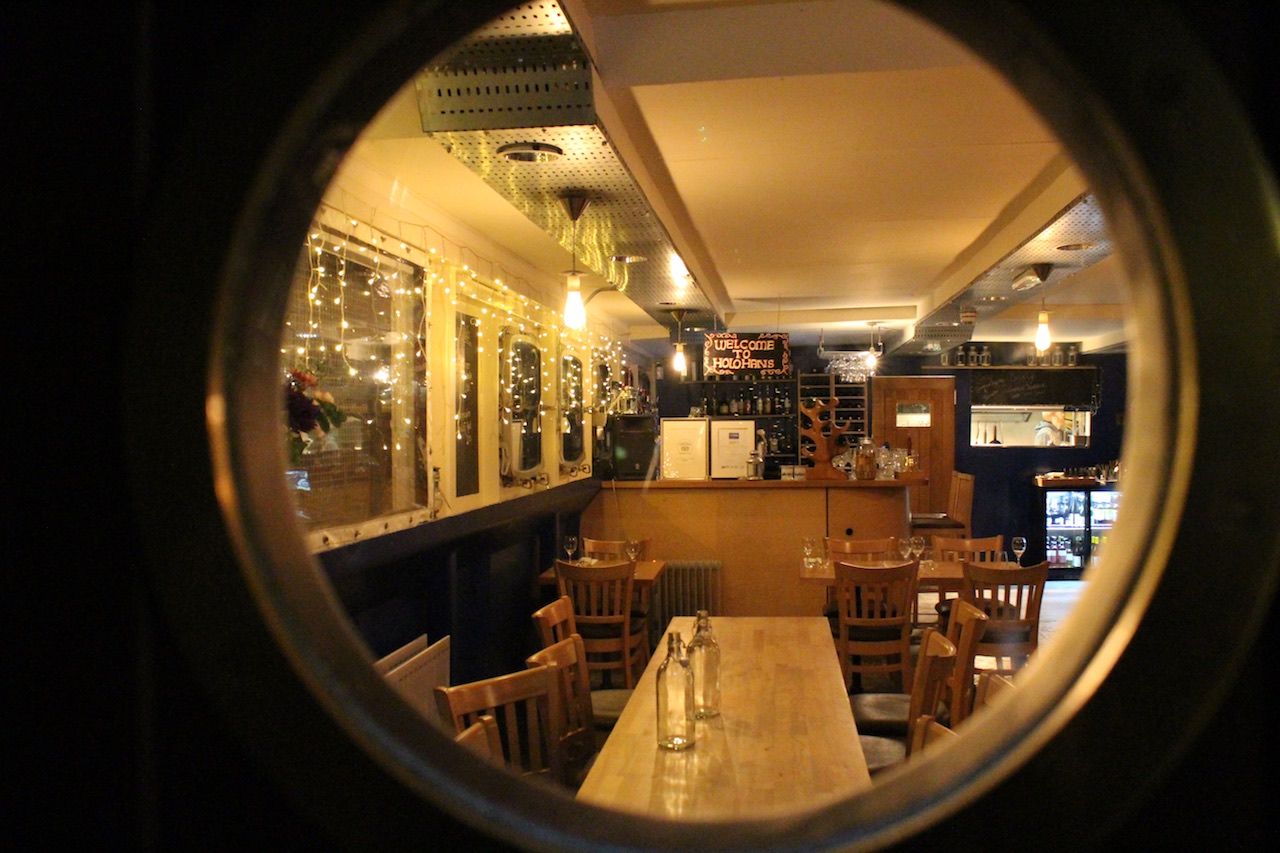 Photo: Holohan’s at the Barge

Carry the nautical theme through dinner with a meal at Holohan’s at The Barge. A short walk from the docks, this family-run restaurant is a total delight. First off, it’s on a boat, which is just…fun. Once you’re on board, any fears that I’ve led you to a novelty restaurant will float away (sorry). It’s beautiful inside, and with limited space for tables, there’s an intimacy that makes it feel extra special. The frequently changing menu features regional produce prepared to perfection. Take a punt on the local favorite, boxty — on the face of it, it’s a humble fried potato pancake, but its many variants all taste incredible.

After dinner, it’s time for some theater, and in Belfast you’re spoiled for choice. For big touring shows with a West End feel, head into town for the Grand Opera House. If you’re in the mood for something a little more local and artistic, two solid options include the Lyric Theatre or ultra-chic The MAC. The latter is the cool new kid on the block, but I’ve always had a soft spot for the Lyric. Slightly outside of the city center in Stranmillis, it has an incredible view of the River Lagan. It also has Liam Neeson as its patron, serves a fabulous weekend brunch, and it’s the only full-time producing theater in Northern Ireland. 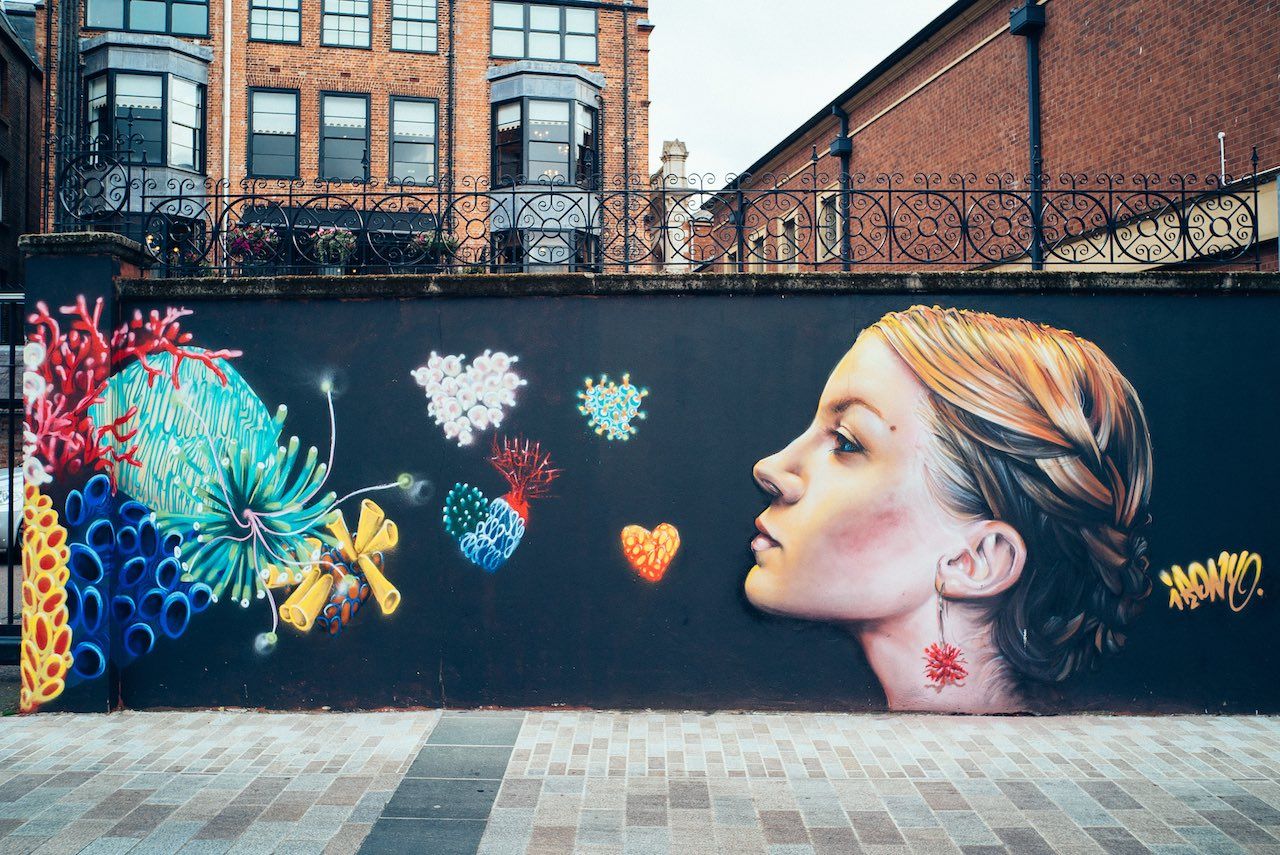 This morning, head straight to Maggie Mays. Hangover favorites are marked out on the menu, and it’s a great place to sample some local grub (for next to nothing, so be kind with the tips!). This is the place to order an Ulster fry (full breakfast), a point of pride in Belfast. You’ll be amazed at the many, many types of breads included — potato bread, soda bread, wheaten bread…

With your tummy full, it’s time to do some more exploring. Check out Belfast Hidden Tours or the Street Art Walking Tour to take in the history and culture of Belfast, from back in the day right up to modern times. The street art tour will lead you to the heart of the city’s modern arts scene (keep an eye out for the wall of famous Irish faces — and try to figure out how many you recognize). Belfast Hidden Tours finishes with a special Irish dancing show in one of the oldest pubs in the city. You won’t get that sitting in a bus!

Both tours take place in the Cathedral Quarter, which is more than a cultural hotspot — it’s one of the most happening areas of the city, laden with hyper-cool pubs and bars. 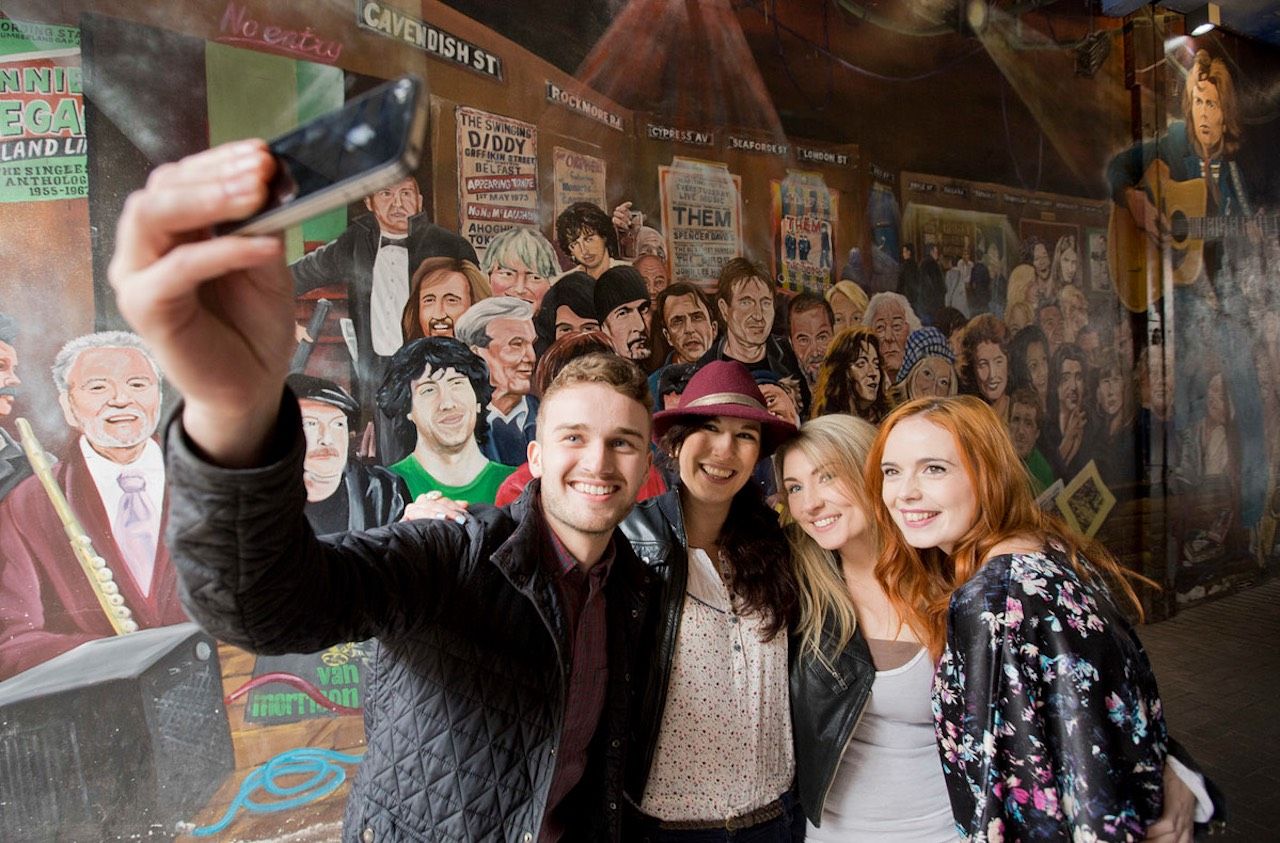 Of course, you can’t truly get to know Belfast without digging into its past. The best way to do so is on one of the highly acclaimed Black Taxi Tours. These will take you right across town, but with a focus in the northern area where two of the city’s most famous mural-lined streets are located. The local drivers share their ground-level perspective on Belfast’s past, present, and future, for an experience you definitely can’t get any other way.

While in the area, make sure to check out the Gaeltacht Quarter, an area known for its Irish-speaking community, as reflected in the Cultúrlann. This is Belfast’s very own Irish language cultural center and regularly showcases art exhibitions, live music, plays, and poetry readings.

When you’re ready, hit up the Barking Dog for dinner. Set in a converted townhouse in the Queen’s Quarter, it’s candlelit and cozy and as charming as it gets. You might want to order the eight-ounce beef-shin burger (yes, we’re really recommending a burger in a “nice” place). But forget about your brioche buns. This one’s served in a large floury white bap dressed with horseradish mayonnaise and melted cheddar cheese. The burger itself features a beef-shin center that’s all richness and tenderness and slow-cooked deliciousness. Wash it down with the restaurant’s own Barking Brew beer.

Time to check out the Cathedral Quarter by night. Whether you fancy a little trad session at The Harp Bar, a fancy gin cocktail at Muriels, live music at the Dirty Onion, or just enjoying the friendly conversation at the Duke of York, all the pubs, clubs, and bars are a short stroll from each other.

If you’re feeling really flush, pop into The Merchant Hotel to sample the world’s most expensive cocktail — a bargain at a cool £750 (yep, that’s roughly $1,050). If that’s a bit out of your budget, there’s plenty more to choose from. 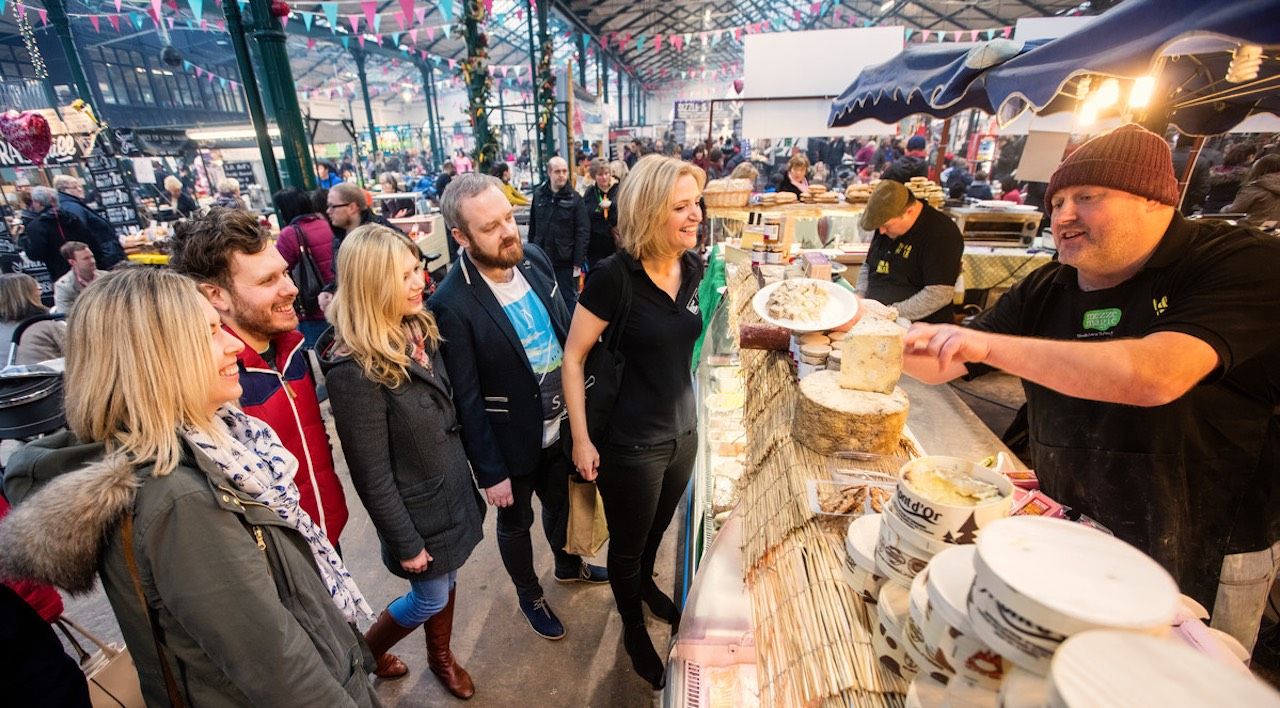 On Fridays and over the weekend, St. George’s Market throws its doors open to show off with food, variety, and craft fairs. Good sense dictates that a lap of food sampling is essential. Grab a Belfast Bap, the city’s famous treat — it’s fresh bread stuffed with egg, bacon, and sausage (and if you can slather it with butter, do so). Once you’ve decided what to eat, grab a seat and listen to whichever local musician is playing that week.

Next, stroll back to the city center to check out the independent and vintage stores. Liberty Blue features edgy local designers, while Octopus’s Garden is an Aladdin’s cave of clothes and vintage records. Do a bit of hunting and you’ll find items that would go for a much bigger price tag on eBay.

Then pop into The Crown Liquor Saloon. Otherwise known as The Crown Bar, this authentic Victorian gin palace is illuminated with gas lighting and has ten private little snugs where you can hide away from prying eyes for a pint of the good stuff (Guinness). Take a moment to check out the tiles that decorate the place from top to bottom, featuring everything from clowns to fleurs-de-lis, fairies, shells…even a pineapple. It’s weird but it’s gorgeous, which is probably why this place is protected by the National Trust and a favored haunt of celebrities. 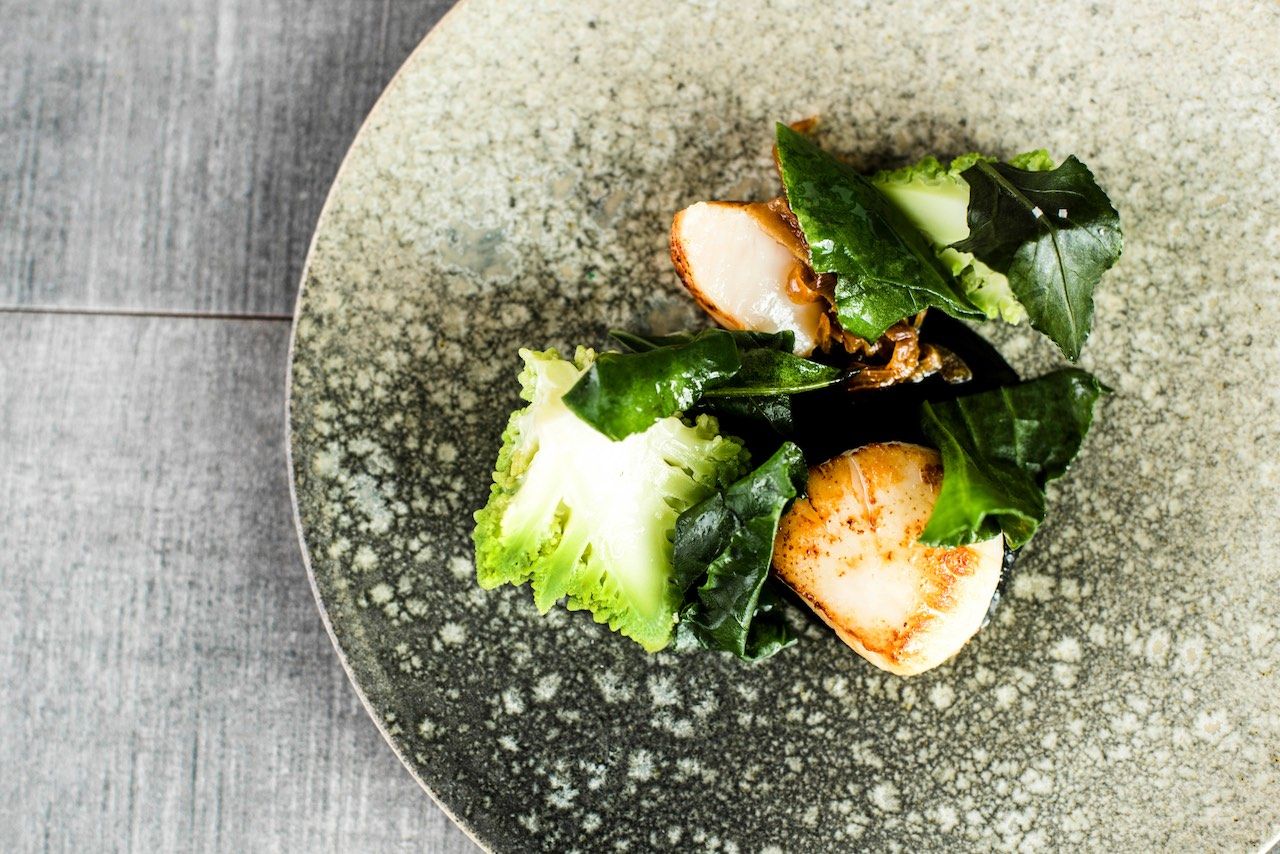 Finish with a tasting menu at the Michelin-starred OX. There’s a beautiful view of the River Lagan, and the tasting menu features the absolute best of local produce (for £55, or under $80!). Expect seasonal mains like duck with quince, chard, and parsley root, and desserts like chocolate, clementine, and Jerusalem artichoke ice cream. Yep, welcome to 21st-century Belfast.

This post is proudly produced in partnership with Tourism Ireland.
Tagged
Travel Belfast, United Kingdom Ireland: Uncovered
What did you think of this story?
Meh
Good
Awesome
✖
travelstoke
Download the mobile app
stoked by