What do Oscar Wilde, Colin Farrell, and Conor McGregor have in common? They’re all Dubliners, of course. And they’re only random selections from a very, very long list of famous musicians, actors, authors, and entertainers to hail from the Fair City.

The Republic of Ireland’s capital and the island’s largest population center, Dublin is filled with history, hospitality, literary connections, and a welcoming vibe that makes everyone want to stay. But if you’ve only got three days, here’s how you do it like a local.

What better way to kick off your visit to Dublin than nabbing a drink with a local? No bribes, no awkward lead-up, no strings attached — City of a Thousand Welcomes is a free initiative run in partnership with the Little Museum of Dublin, whereby locals take visitors out for a chat and cuppa (or a pint, depending on what you’d like!). No one knows Dublin like a Dubliner, and as you’ll soon find out, no one can tell stories like one either. It’s a great way to immediately get a taste for the city.

Although you could spend your entire day chatting with your new friends, you’ve got some cultural highlights to check out. Stop #1? Trinity College, right in the heart of the city. The university is as prestigious today as ever, and the 18th-century Old Library happens to be home to over 200,000 books and a particularly famous medieval manuscript dating back to 800 AD. The Book of Kells contains the four gospels of the New Testament, and while you may not be able to read much of the book’s Latin script, seeing intricate illustrations that were inked more than a thousand years ago is completely amazing. 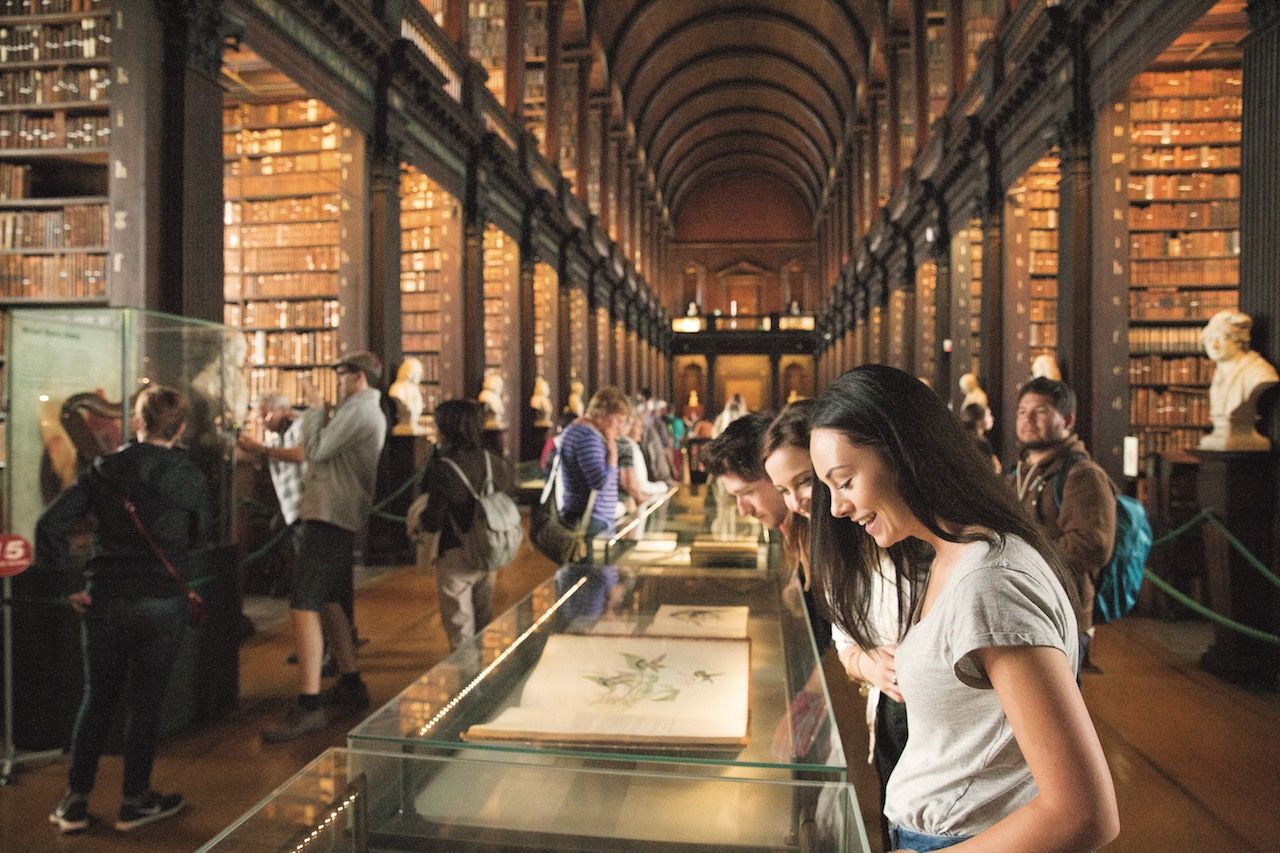 Next, wander towards St. Stephen’s Green. This is basically Dublin’s Central Park, one of three ancient “commons” restored in the late 1800s. Its layout is super Victorian, but it’s been updated since with miles of walking trails, lakes, waterfalls, bridges, and notable landmarks like the Fusiliers’ Arch. It’s right next to one of the island’s main-est of main drags, Grafton Street — if you’ve got time, a stroll up this busy shopping lane is a great bet. There’s often world-class buskers (one has been on Ellen, bizarrely) and if you’ve more than a penny or two to spare, the gorgeous boutiques along South William Street showcase some of the best of Irish design and fashion.

Those more interested in saving said pennies and exploring the weird and wonderful should head to George’s Street Arcade. Each seller offers something unique, and you can find everything from local crafts, vintage clothes, and freshly baked delicacies and pastries right through to fortunetellers. 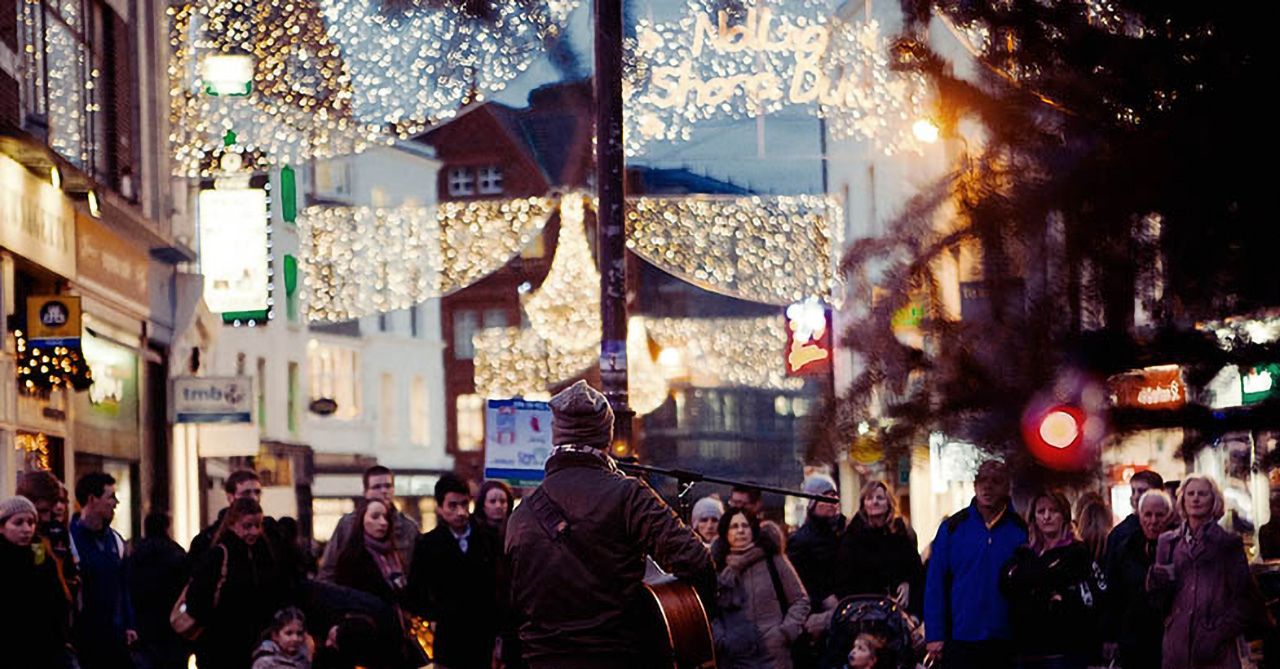 Shopping is thirsty work, and there’s only one place that serious shoppers go to sate themselves: Bewley’s on Grafton Street. Recently restored, Bewley’s is probably the most-loved and best-known café in Dublin, full of chatter, cake, and coffee. With many of the original features still in place, including open fireplaces and Victorian tiles, it offers a frankly sinful selection of pastries and cakes. Be warned, though — it’s popular, so queues are to be expected (but it’s worth it!).

After an afternoon exploring the city center, you’ve definitely earned yourself a good dinner, and that means it’s time for Featherblade. Just around the corner from Grafton Street on Dawson Street, this is one of those restaurants where a few things are done exceptionally well, like the house-named Featherblade steak (Irish beef is world-renowned, as is the produce in general). It’s where it’s at. Every side is exceptional, too…especially the creamed spinach, mac and cheese, and triple-cooked chips.

For an after-dinner tipple, continue up Dawson Street to Peruke & Periwig. You could be forgiven for thinking you’ve stepped back into Victorian times or into a Harry Potter novel. It’s the kind of place where you can imagine some of our renowned authors whispering secrets by candlelight. The bartenders are famously talented — order whatever cocktail you fancy, and they’ll make the best you’ve had. Note that this magical little pub is small, so it’s best to save it for couples or very small groups.

If you’re looking for something a little more traditional, get over to The Stag’s Head. Hidden away off Dame Street in a tiny passageway called Dame Court, it’s one of the best preserved Victorian pubs in the city, and it’s full to the rafters every night. If you’re looking for real traditional Irish music, foot stamping, and for the whole room to be singing, go downstairs. The Stag’s Head is also touted as pouring one of the best pints of Guinness in the city.

After the shenanigans at The Stag’s Head, you’ll undoubtedly need a little sustenance. Top of the list is Brother Hubbard on Capel Street. Check out the Turkish eggs menemen — lightly scrambled eggs with çemen (fenugreek), roast peppers, whipped feta, kalamata olives, and a chili, red-onion, and mixed-herb salsa on toast. Save a little space for a pastry after, as the pear and frangipane in particular is gorgeous.

Of course, you can’t come to Dublin and not check out its most famous export. The Guinness Storehouse does a seriously fun and interesting tour, taking you through seven floors of interactive exhibits. It covers everything from how Guinness is made and how it should be poured, right through to the beer’s cultural impacts over the years, especially in advertising. And no, you won’t go through seven floors of Guinness paraphernalia without a chance to sample a pint of your own — right at the top in the rooftop Gravity Bar. This is arguably the best view over Dublin in the entire city, so don’t drink up too fast.

More literary-minded? You could fill a museum with famous Irish writers, so Dublin did just that with the Irish Writers Museum. Ireland’s four Nobel Prize winners — W.B. Yeats, Samuel Beckett, Seamus Heaney, and George Bernard Shaw — are all featured here alongside Ireland’s other literary heroes. For something a little more nuanced, take a walk around the streets (where it all began) with the Dublin Literary Pub Crawl. You’ll tour the pubs Ireland’s literary greats frequented — all in all, you get the pub, the poet, and the pint.

For dinner, head toward Pig’s Ear. They’ve won Michelin Bib Gourmand awards for the past nine years running, yet their emphasis is on good value and a casual atmosphere. Call ahead for seats in one of their three dining rooms, and be sure to eye the Free Range Roast Chicken or the Grilled Chicory — and always, always, always finish off with the vanilla cheesecake with Hob Nob biscuits. 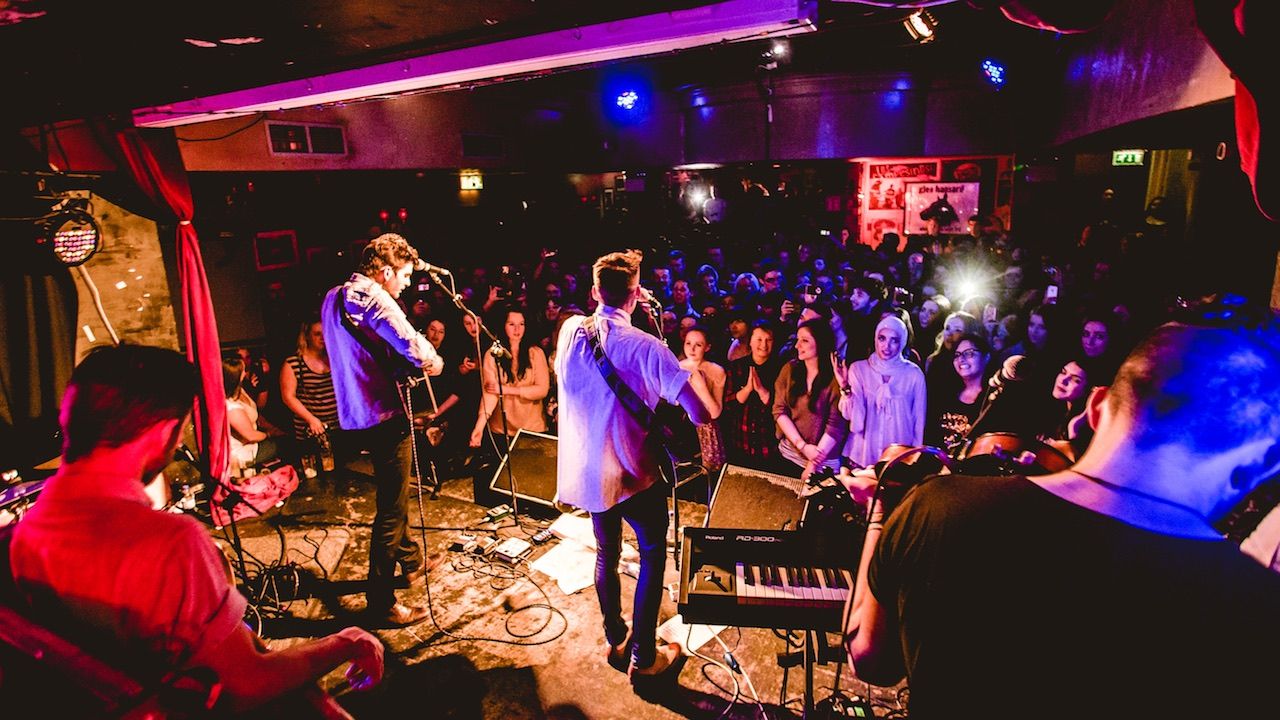 While there are plenty of charming Irish pubs to visit, Dublin also has a brilliant nightlife scene to explore:

For brunch, look to the bottomless eats at The Exchequer. The whole place oozes with good-time vibes, and the friendly staff will keep you topped up as you enjoy delicious food in an unpretentious environment.

For the afternoon, again, there’s a number of great options. Consider hopping on the DART and heading northward to Howth, one of Dublin’s beloved seaside areas (if you’ve got a sunny day ahead of you). Picture charming pubs, tasty seafood, and a bustling little market. If you can, do the Bog of Frogs walk, which is about 12 km (7.4 miles) and takes just under three hours. The route brings you right along the coastline — which is breathtaking — and finishes up on the doorstep of the Bloody Stream, a pub with lots of delicious, fresh seafood. 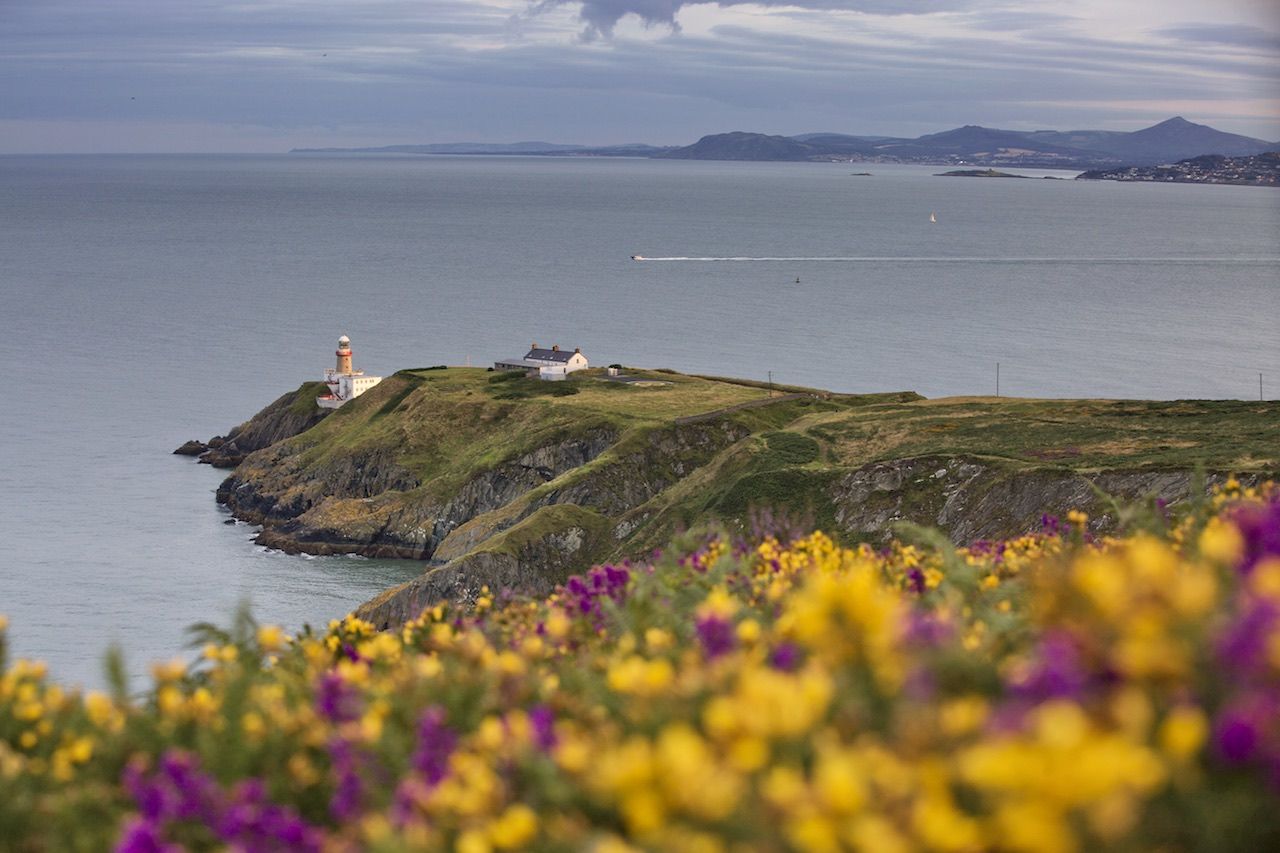 On rainy days, there’s Kilmainham Gaol. Many of the key figures in Irish history were held in this prison-turned-museum, which is now technically the largest unoccupied prison in Europe. To understand on a deeper level the character of the island and the strength of its people, this is a good start.

If art is more your thing, try IMMA, or the Irish Museum of Modern Art. Just around the corner from Kilmainham Gaol, it’s home to an ever-changing selection of exhibitions from the finest of Irish modern artists. This is also where you’ll find the National Collection of Irish and International Modern and Contemporary Art, now numbering over 3,000 pieces. Despite the collection’s breadth, it’s a very manageable art gallery, size-wise, without the queues you find at other famous galleries around the world. 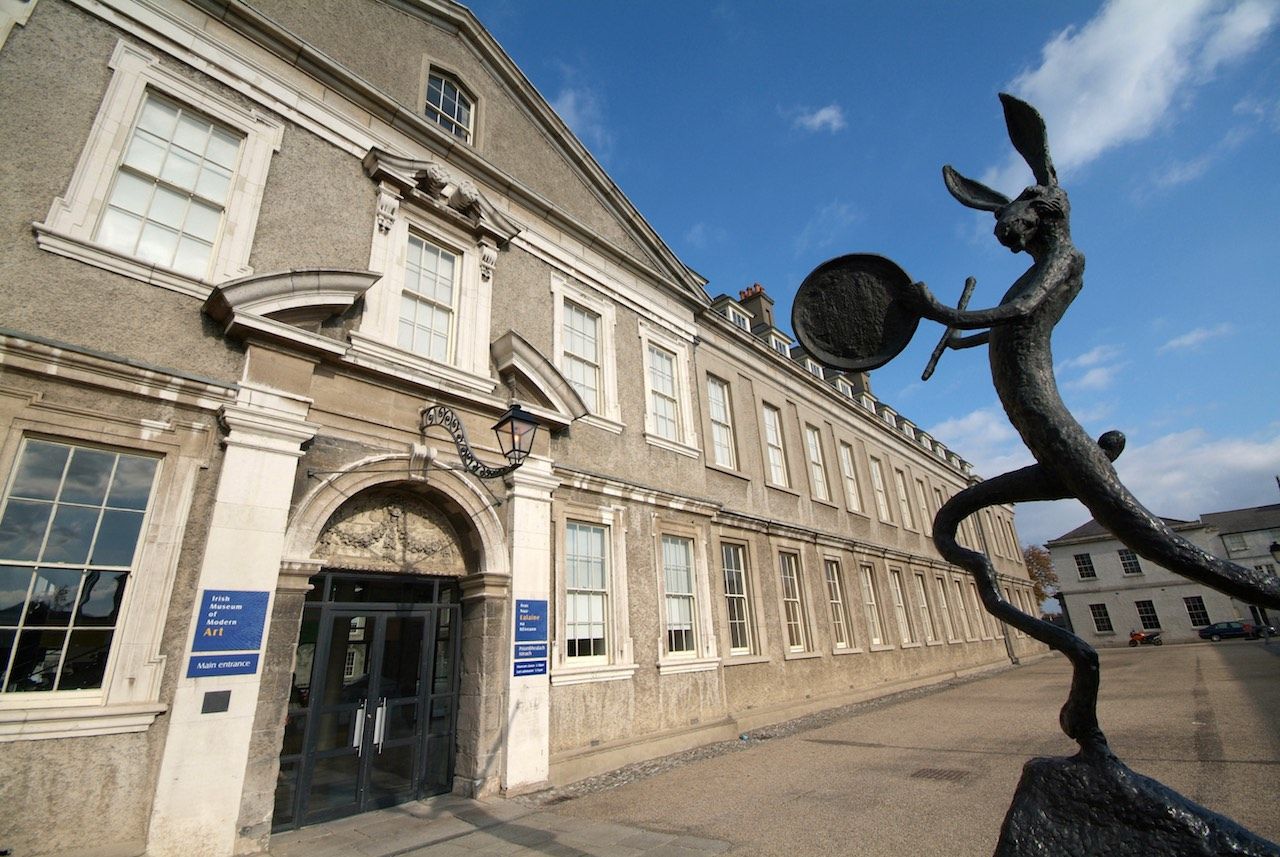 For dinner, head to Winding Stair (major bonus points if you caught on that it’s named after a Yeats poem). The winding staircase takes you up to views overlooking the river Liffey; back at your stripped wooden table, the dishes are old-fashioned and filling, always sourced from somewhere on the island. Don’t expect a lot of pomp and circumstance here — it’s about the simple combination of homey ambiance and good food.

Continuing with the casual vibe, there’s two options for your evening entertainment: If you’re into theater, music, dance, visual arts, and everything in between, the Project Arts Centre is just a stone’s throw from Elephant and Castle in Temple Bar. Project is home to many of Ireland’s up-and-coming contemporary artists, and they work with creators across all art forms to help develop and bring new, thought-provoking works to the stage. Dubbed “the city’s most interesting venue” by Lonely Planet, the Project Arts Centre has helped launch the careers of Liam Neeson, U2, and Gabriel Byrne.

For something more upbeat, head to Token, a bar mixed up with a retro arcade and pinball parlor. In the trendy Smithfield area of town, there’s a reason this bar seems pretty hipster…because it is. Still, it’s really fun to have some drinks with friends while competing with them on some of your childhood favorites. 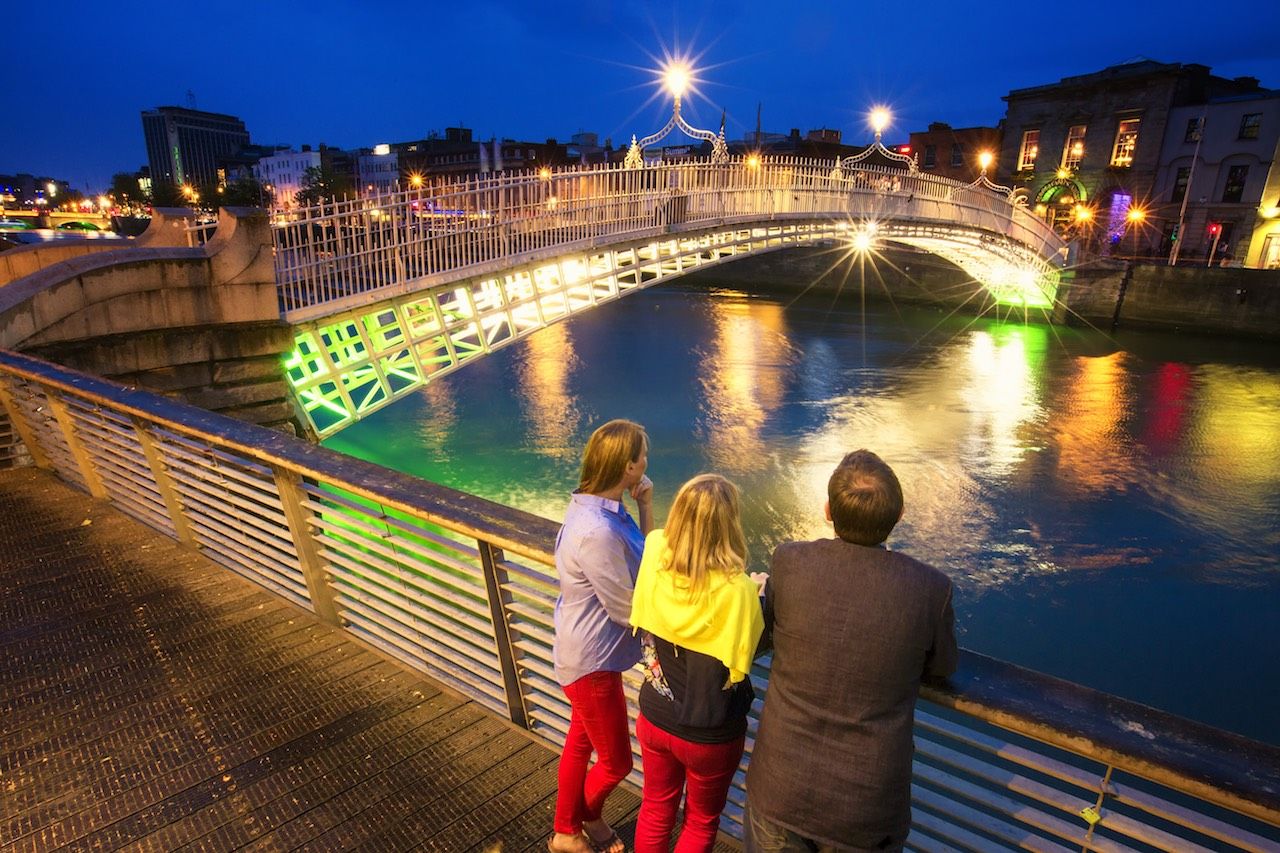 In truth, these are just a few things you could experience in Dublin. There are incredible bars, restaurants, theaters, and museums on every corner. It’s a perfect city to get lost in, which is a great way to find your own new favorites. Either way, be sure to chat with the locals — not only will they have the best tips and stories for you, but it’s the people that make Dublin the “City of a Thousand Welcomes.”

This post is proudly produced in partnership with Tourism Ireland.
Tagged
Travel Ireland: Uncovered
What did you think of this story?
Meh
Good
Awesome
✖
travelstoke
Download the mobile app
stoked by