Idaho enjoys many superlatives when it comes to the outdoors, such as the country’s most sought-after white-water rafting and its earliest ski resort. It’s time to add another one: rock climbing. Not only does Idaho have a variety of climbing options across the state, it’s also home to the City of Rocks.

Located near the small towns of Almo and Oakley, City of Rocks is roughly a three-hour drive from Salt Lake City, Utah, or Boise, Idaho. Made literally of spires of towering granite resembling skyscrapers and buildings, “the City,” as it’s often referred to, is a national reserve in the National Parks Service system. The park has an otherworldly feel as you wind through a maze of unique rock formations, each of which is home to world-class sport and traditional, or trad, climbs. While there are visitors who come to camp, hike, bike, and ride horses — and it’s worth a visit for those activities alone — the City is truly a climber’s heaven. 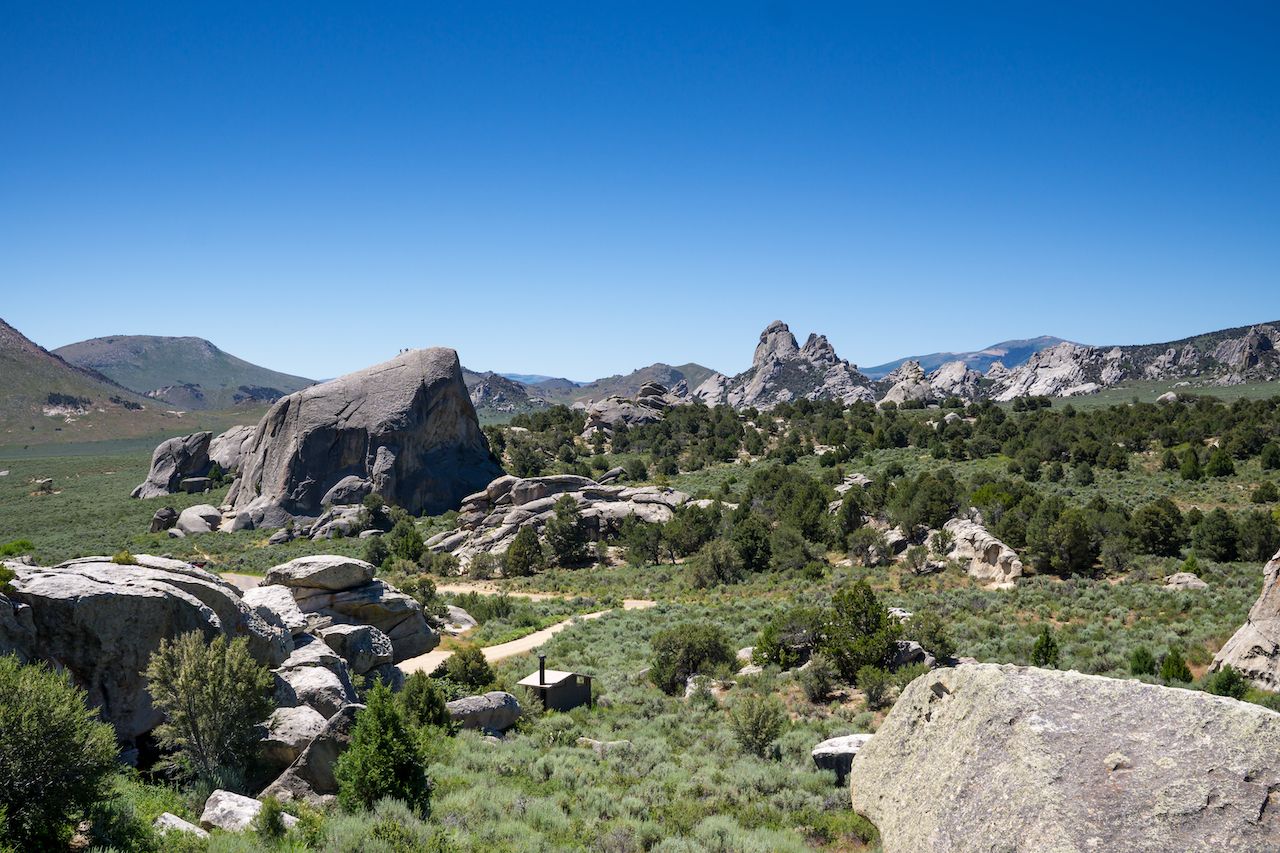 Roped climbing first started at the City in the 1960s, a time when climbing was still considered an eccentric pastime for dirt-bags, and the City was a remote, out-of-the-way area to visit. A group of climbers from Utah calling themselves “the Steinfell Club,” led by noted climber Greg Lowe, put up hundreds of the park’s routes from the 1960s through the early seventies, shaping much of the City’s climbing today.

In the eighties, the City was home to some of the most challenging routes in the country. And routes in the park are still notoriously difficult for the grade. In other words, the grading system has been “sandbagged” — giving climbers who spent their time at the City a leg up over those who spent time in the bigger climbing areas of the day like Yosemite. In 1990, City of Rocks was featured on the cover of Climbing, making the area a draw for those looking to rock climb and put up new routes as well.

Camping at City of Rocks 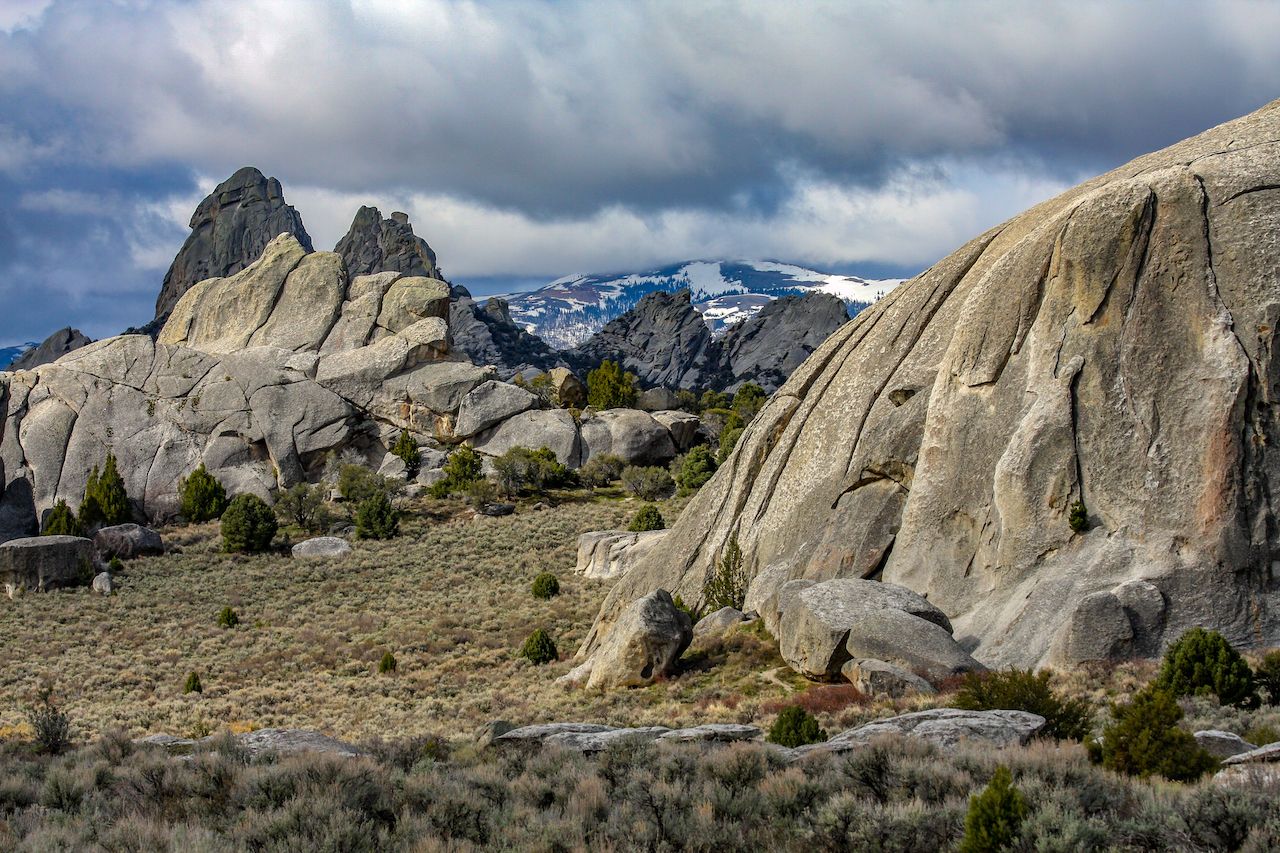 Throughout the park are 64 dispersed, primitive campsites, most with fire rings, picnic tables, and access to toilets. These campsites are popular, and reserving in advance is highly recommended, particularly on weekends and holidays. Sites can be booked on Reserve America. Just to the south of the City of Rocks is free and primitive Bureau of Land Management (BLM) camping land. And to the north, there’s US Forest Service land. There is no bathroom or water access, and because they’re public lands, the Leave No Trace principles strongly apply.

The best climbs at the City 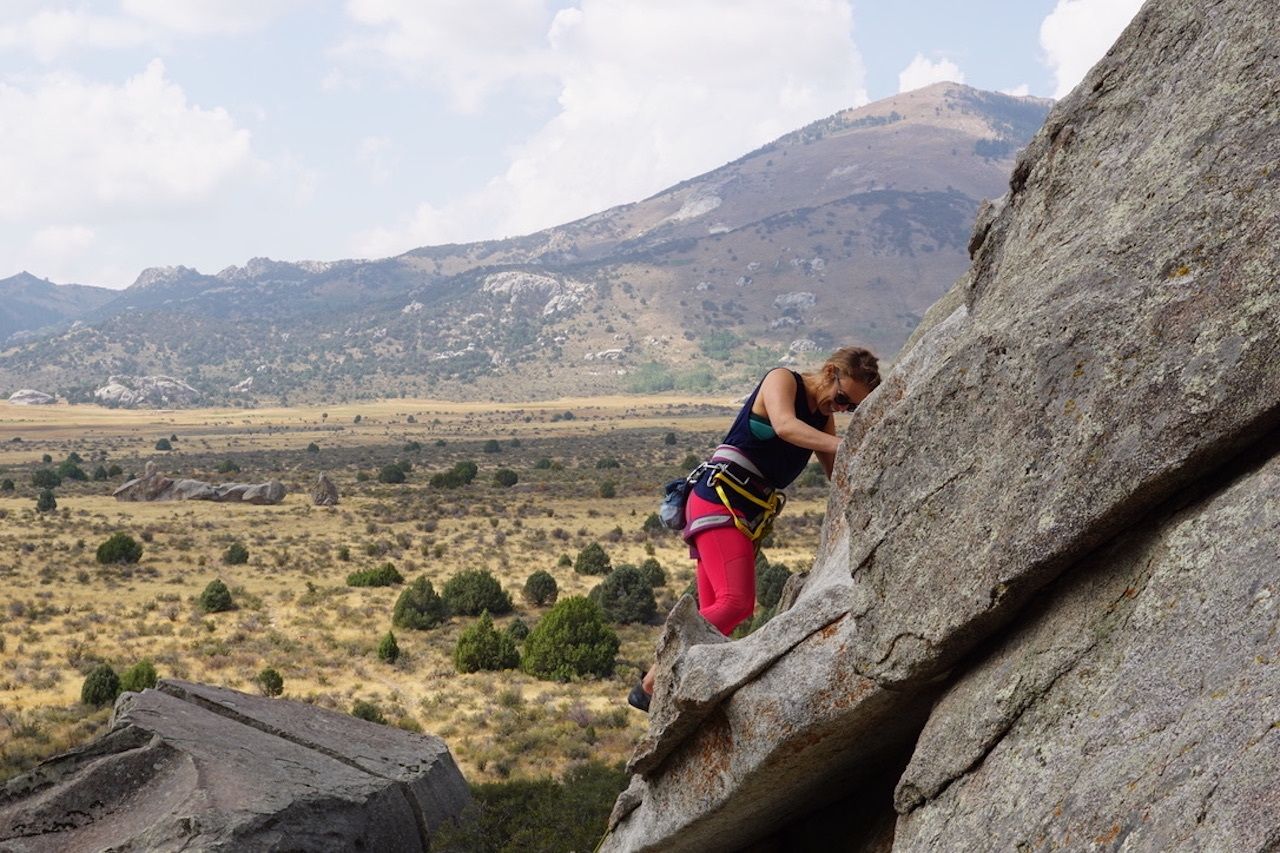 With over 1,000 routes of fine-grained granite, there’s something for everybody. You’ll find features like chicken heads, large knobs or protrusions where you can anchor your belay or grab a hold, and huecos, which mean in climbing the same thing they mean in Spanish: holes or depressions.

The best times to climb are the spring and fall when the temperatures are in the 50s to 80s but expect to see lots of other climbers and visitors at this time. City of Rocks is climbable in the summer if you can tolerate temperatures in the high 80s to low 90s; it’s hot, but there are much fewer people. Winter is a no-go; at an elevation of just over 6,000 feet, the City is blanketed by snow.

If you’re not one for much of a walk or hike, visit one of the roadside crags like Bath Rock, home to classic fun routes like Rollercoaster (5.9) and Colossus (5.10c) or Elephant Rock, home to Wheat Thin (5.7 trad) and Rye Crisp (5.8 trad). No trip to the City is complete without climbing Tribal Boundaries (5.10a/b), one of only a handful of four-star routes in the area. This route has cool editing moves, great exposure, and a testy slab finish.

If you just want to get a sense of the park but aren’t ready for a full-on rock climbing experience, there is plenty of bouldering — where you’re lower to the ground and don’t need belays and other gear — to be found at the City of Rocks as well. You’ll find Easy Arete and Unidentified Boulder Problem by the campgrounds and other boulders at the Dungeon. 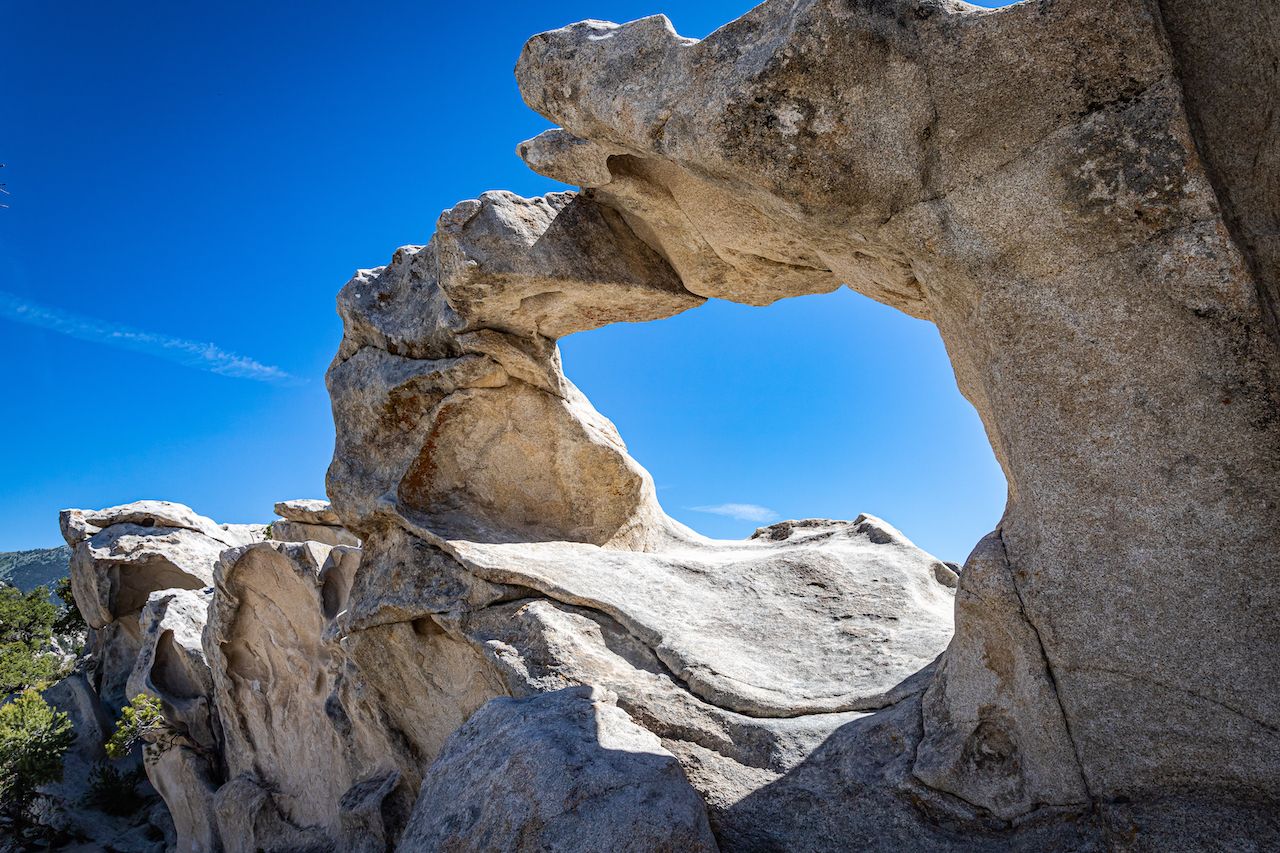 Before heading to the City of Rocks, you’ll want to get yourself a guidebook: City of Rocks and Castle Rocks State Park by Dave Bingham, who’s been climbing at the City since the ‘60s and printed his first version of the book 30 years ago. Bingham gives hike times and sun/shade icons to show the best time of day to climb at each crag. There’s also icons for what type of climbing the route is (trad, sport, mixed), how many stars it’s rated, and a description that often includes some humorous history of the route. If you’re a fan of the Mountain Project app, make sure to download the whole area before visiting, as there’s rarely any service to be found in the City.

Due to budget cuts, the City became trash-can-free in 2019, so anything you pack in must be packed out. Drinking water is accessible at the City of Rocks Visitor Center or a Bath Rock, both of which also have vault toilets.

With little else in this desert area other than rocks, what’s a climber to do after a long send (derived from ascend, that means “climb)? First, head to the top of Bath Rock to watch an epic sunset. There are two ways to the top: for the fearless, free solo up the front side. For those warier, make your way up an easy scramble and some final rebar rungs to the top.

If you’re too tired to cook, grab some fresh pizza at Rock City Mercantile, a small store in Almo with a great selection of beer, a few essentials, and a working pizza kitchen. The Tracy General Store also has some groceries, a post office, and showers. Lastly, rest those tired muscles in the Durfee Hot Springs, which have four hot pools of varying temperatures and are open until 10 PM. 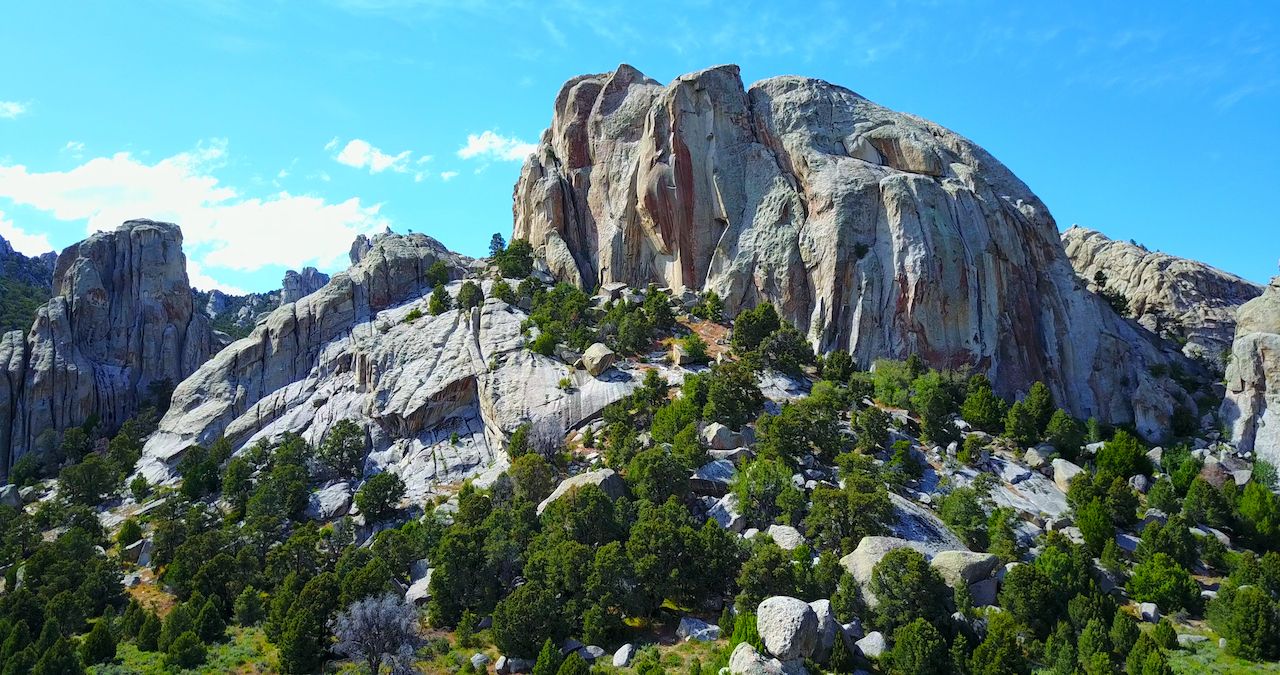 Castle Rocks State Park, located just 15 minutes from City of Rocks and four miles from the town of Almo, is fairly synonymous with City of Rocks — much like Brooklyn and Manhattan are both parts of New York City. This once private ranch became a state park in 2003 and has over 300 climbs. While also made of granite, the formations at Castle have fewer spires and more blobs, domes, fins, and towers. Much of the park’s climbs are in the sun, making it a good spot to head to if the weather in the City is feeling a little cold. Since this is an Idaho state park, there is a $5 self-serve entry fee and cash only.

Raft Idaho’s Salmon River and actually help the salmon in their fight to survive.

Best of the Idaho outdoors