Manchester is a city that celebrates with sound; from the rainbow-colored street parades of Pride’s discos to the open-air choirs at the Christmas markets. Even when adversity struck the city in the form of a terrorist bombing at an Ariana Grande concert in 2017, its people didn’t hide away but responded with mass singalongs in the streets and a giant, televised benefit concert just two weeks later.

In the 1960s, teenagers danced all night to northern soul at the Twisted Wheel, and by the 1970s they were enthralled when the Sex Pistols played at the Lesser Free Trade Hall — a legendary 1976 gig that inspired the formation of the Manchester bands Joy Division, Buzzcocks, and The Smiths. By the late 1980s, acid house and “Madchester” were the dominant sounds, but even they were displaced when, in 1994, a pair of swaggering Mancunian brothers released an album that heralded a new era.

Oasis’ Definitely Maybe was a record that launched a million Britpop imitators and became anthemic for listeners across the world. Fans loved the boisterous rock and roll as much as the all-swearing drama of the band itself, and less than a month after the release of the debut album, Noel Gallagher quit in a storm of insults and thrown instruments. The brothers quickly reconciled but the following 15 years were still filled with no-shows, fights, and the occasional public fracas. In 2009, Noel left for the final time, but not before the band had sold an estimated 75 million records. With Definitely Maybe turning 25 this year, there’s no better time to take a tour of the city that made it. 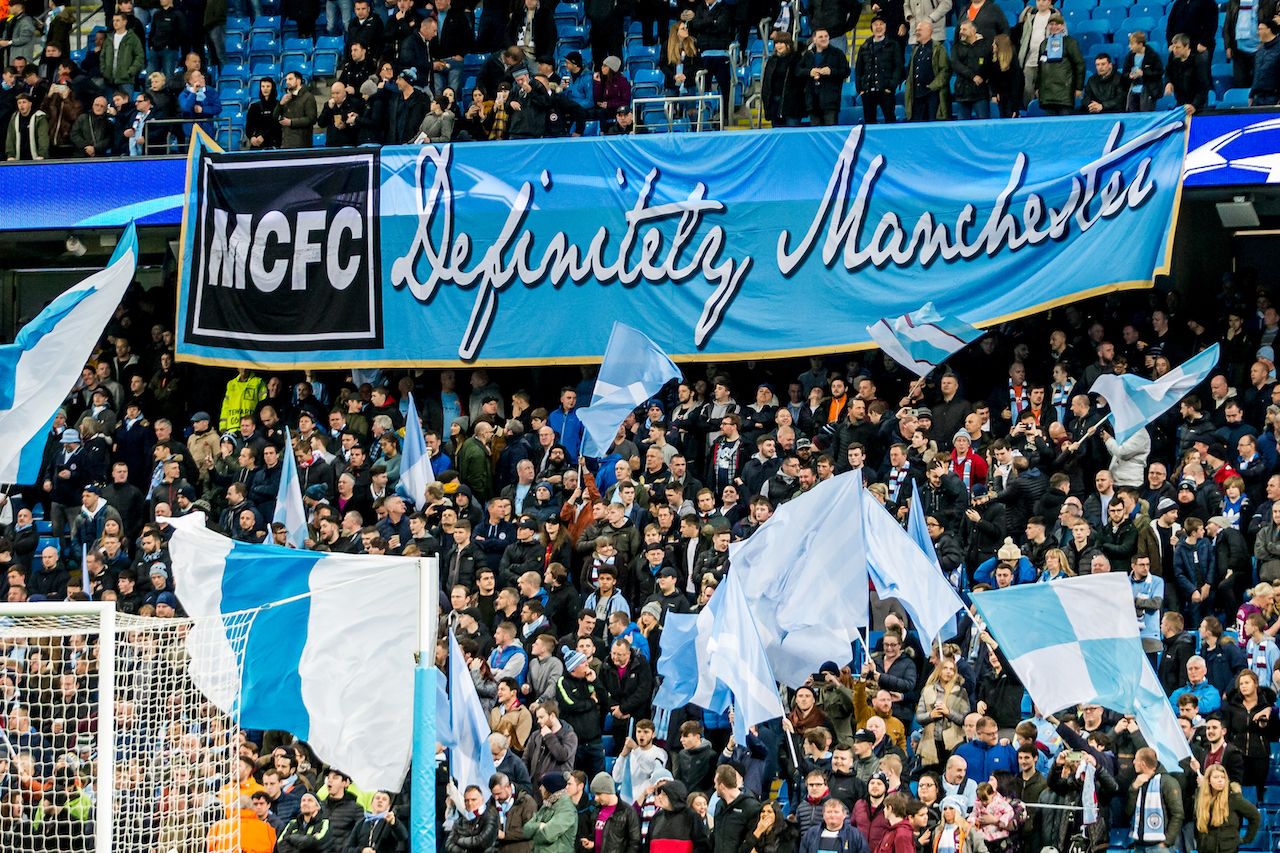 The Gallaghers are both lifelong fans of Manchester City Football Club, and a tour of the team’s home stadium is a must for many fans. Although the stadium was only completed in 2002, it has played host to several Oasis concerts over the years and remains the place where both brothers continue to attend games (although presumably not sitting next to each other). In addition to a tour of the team’s history and the ground itself, visitors can see Oasis memorabilia in the VIP suites and catch a glimpse of where the pair sit on matchdays. 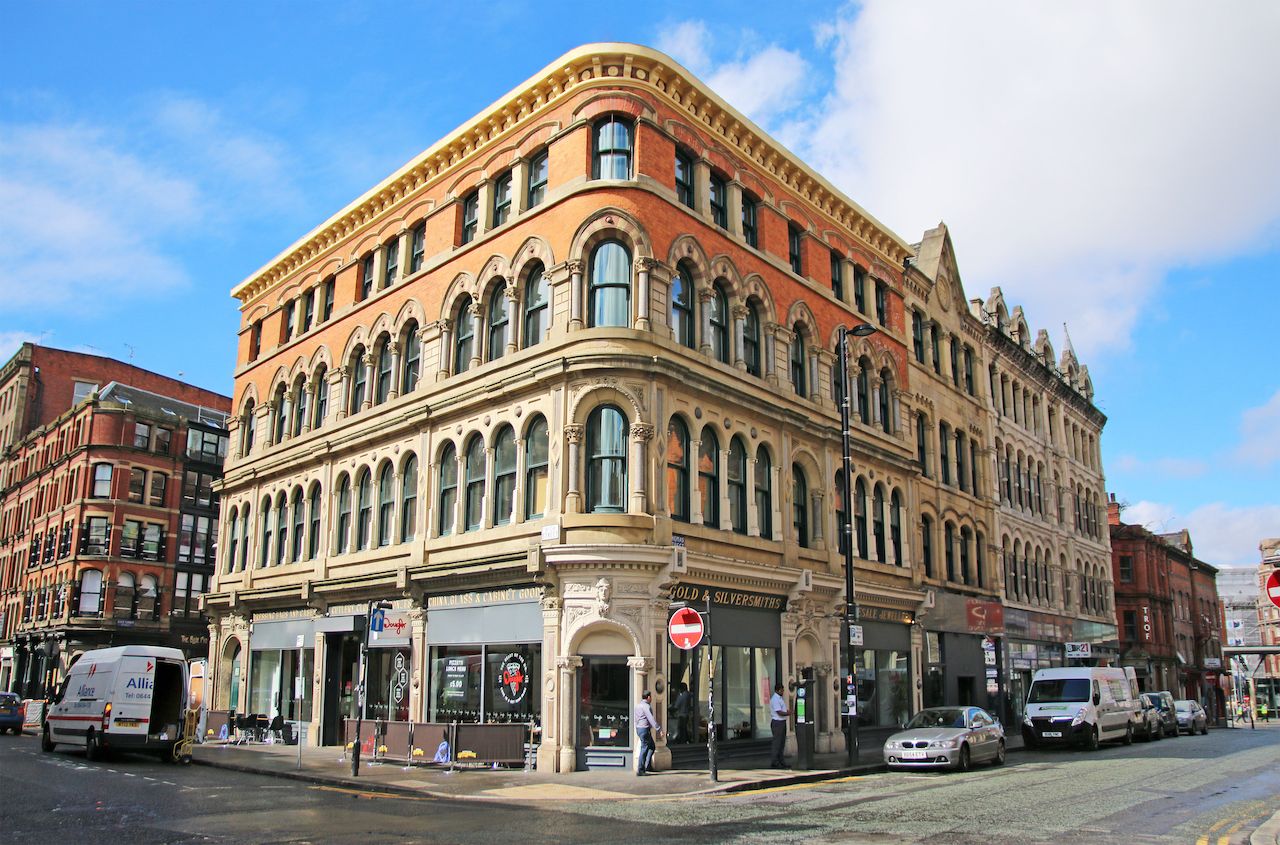 Just an eight-minute ride on the Metrolink tram will take you from the Etihad Campus stop to Manchester Piccadilly Station, a few minutes’ walk to Oldham Street in the vibrant Northern Quarter. Take your time and explore a host of the colorful indie shops and cafes visited by all the Manchester bands in the 1980s and 1990s. Check out the location of the old Dry Bar, a dive bar that became notorious for banning Liam Gallagher for life after a fight there.

Across the road is the Manchester landmark, Afflecks, a shopping emporium crowded with everything from incense sticks to vintage clothes. The band used to buy trainers there back when they were young so stop by and have a look through the racks for some retro Adidas Samba shoes.

A 10-minute walk from Oldham Street is the former Boardwalk nightclub, the live music venue where Oasis made their first public appearance in 1991. They went on to play many more times over the years, along with fellow Mancunians like The Stone Roses and Happy Mondays — giving the venue a reputation for raucous nights.

The Boardwalk has been converted to other uses now, but it remains a site of pilgrimage for fans who come and see the commemorative plaque that celebrates the era. Close by is also the building that housed The Haçienda nightclub, the home of acid house in the UK and the venue for the Definitely Maybe launch party in 1994. 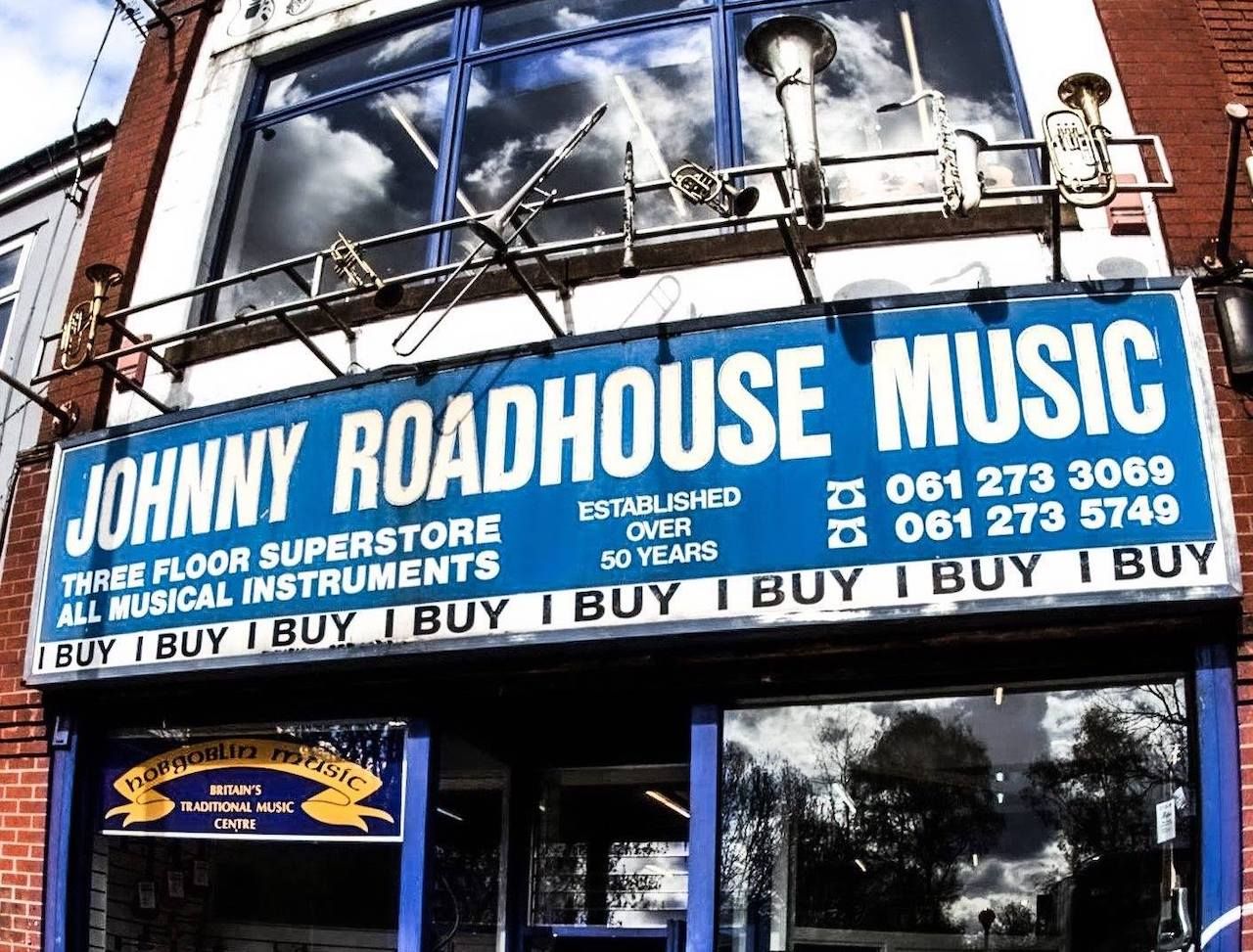 A 15-minute walk to the south you’ll find Johnny Roadhouse Music. A Manchester institution for over 50 years, this is the shop where Oasis and many other bands have shopped for their instruments over the years. For especially keen-eyed fans, you’ll notice that in the video for the song “The Masterplan,” animated versions of the band walk past the shopfront of this very place.

Today, the shop is still a port of call for musicians buying their instruments, and fans can also see Oasis memorabilia such as Paul “Bonehead” Arthurs’ guitar. 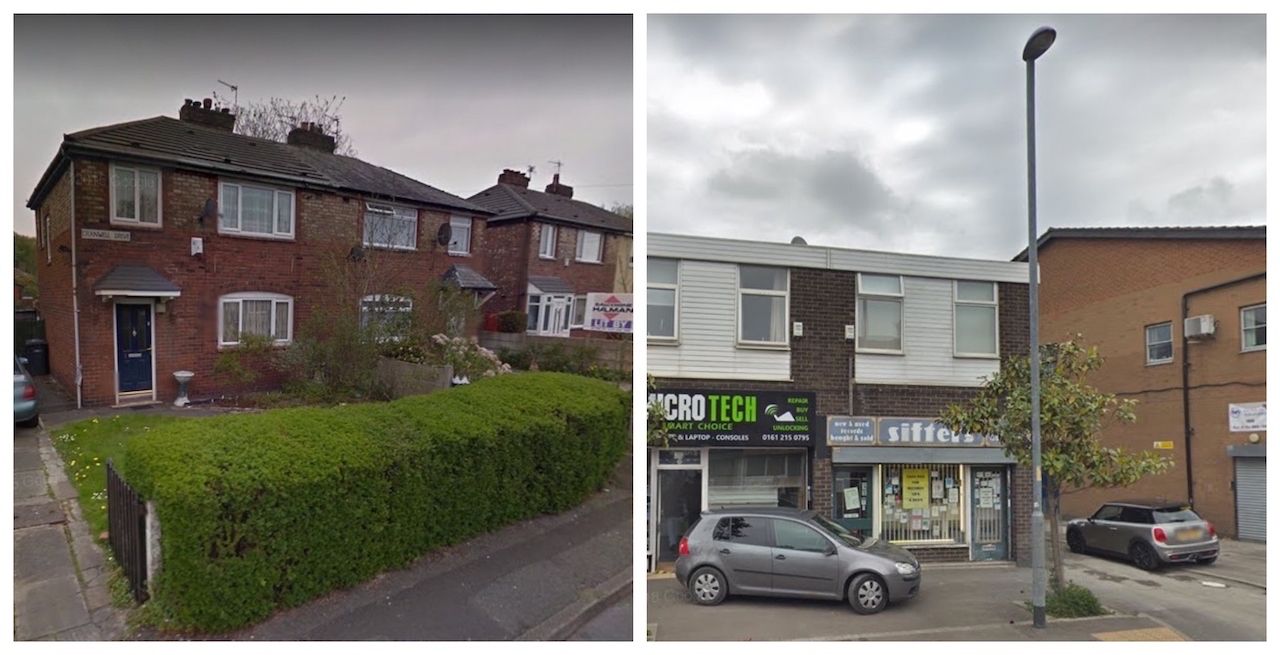 From the left: Cranwell Drive and Sifters. (Photos: Google Maps)

If you want to see where it all began then take a trip out to the suburb of Burnage where the Gallaghers grew up. From Grosvenor Street, near Johnny Roadhouse, catch the number 50 bus toward East Didsbury and alight at Kingsway (stop F) — this will take around 20 minutes. From the bus stop head right toward 1 Cranwell Drive, the brothers’ childhood home. Lots of fans still come and pass by to check out the area, but it’s still a residence so please be respectful.

A few minutes away, on Fog Lane, is the record shop, Sifters, which was the place made famous by the lyrics for the song “Shakermaker”: “Mister Sifter sold me songs, when I was just sixteen.” Have a browse through the vinyl before heading over to nearby Fog Lane Park where the band played football as youths and then ended up filming segments for the video of “Shakermaker,” too. 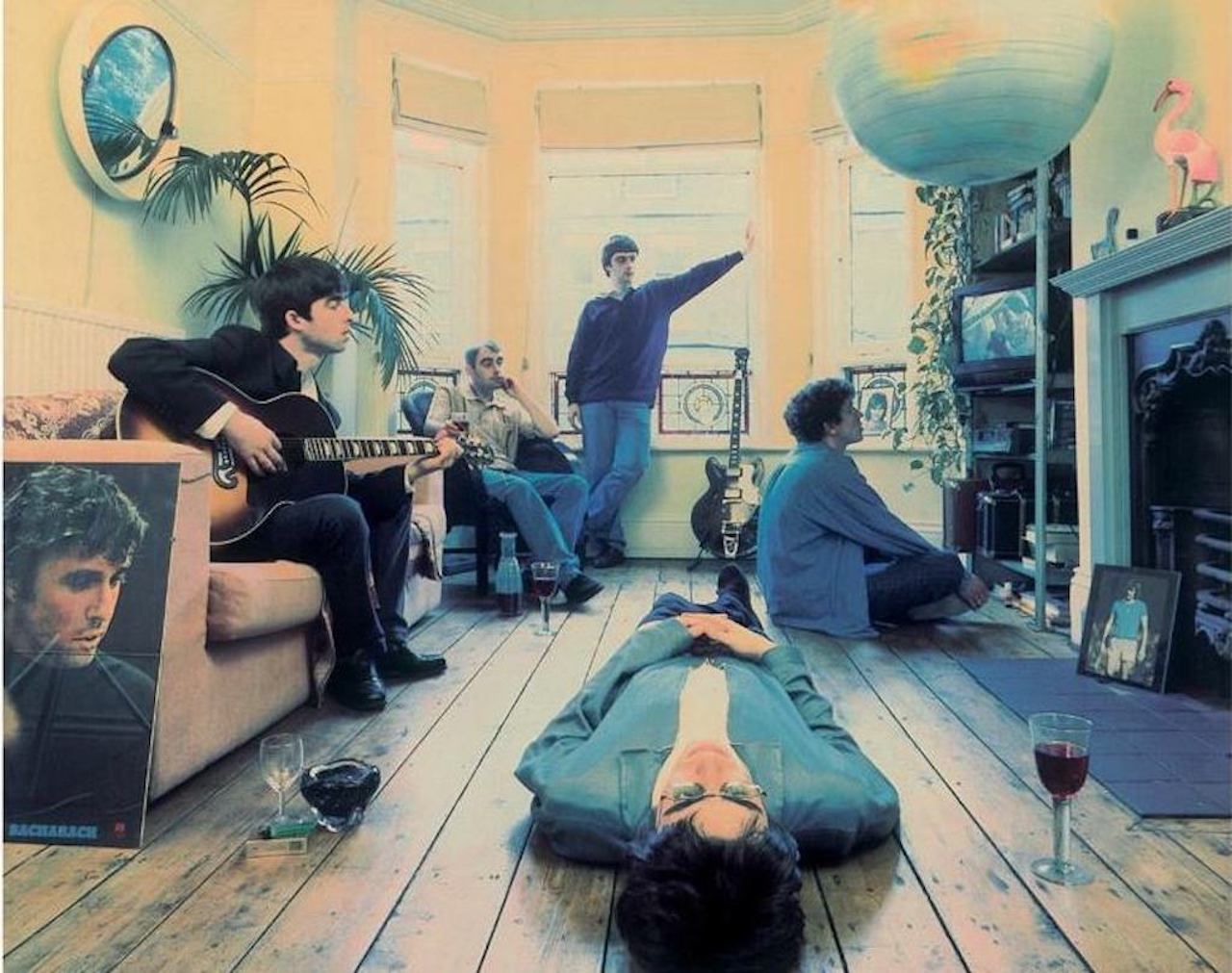 Another house that was formative in the band’s development was the home of the guitarist, Bonehead. This one is located a 30-minute walk, or five-minute taxi ride, away in West Didsbury. The house at 8 Stratford Avenue is a regular stop for fans who want to have their own photo taken outside the place where the cover art for Definitely Maybe was shot. The house’s backyard is yet another site where segments of the video for “Shakermaker” were filmed — although it’s not accessible as the house is now home to another family.

When you’re done with sightseeing, the rest of West Didsbury is a great place to explore as it’s packed with bars, restaurants, and independent shops. Try Volta for excellent food and strong booze on its popular outdoor terrace. 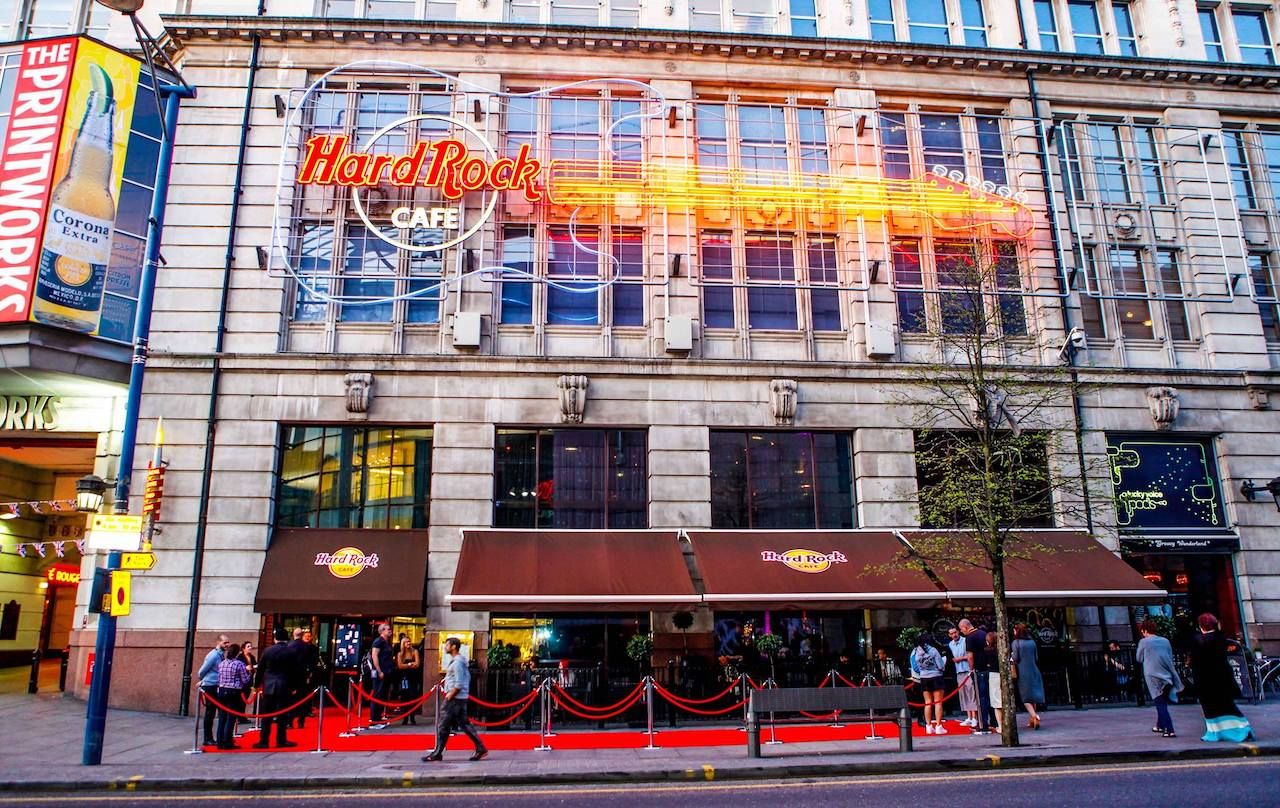 Although many of the bars and clubs Oasis frequented have now succumbed to the passing of time, we recommend you head back into the city center (you can get the tram from West Didsbury) for a final dose of cigarettes and alcohol — although now you can’t smoke indoors anywhere. Aim for the ever-popular Hard Rock Cafe, where you can indulge in a couple of pints and have a look at the signed Oasis memorabilia that lines the walls. It has records, merchandise, and some of the band’s prized instruments, too.