The birthplace of the iconic black stuff, Dublin is a bucket-list destination for beer lovers around the world. Having a pint of Guinness in a cozy Dublin pub is the quickest way to imbue yourself in Irish craic. But to truly appreciate the 250-year history between the Guinness name and the city of Dublin, head to the Guinness Storehouse, the first stop for over a quarter of Dublin’s tourists. Beyond the Storehouse itself, the city has 751 pubs, so you don’t have to travel far between drinks. Here’s the lowdown on how to sip your way through Dublin’s best watering holes.

Start with the Guinness Storehouse 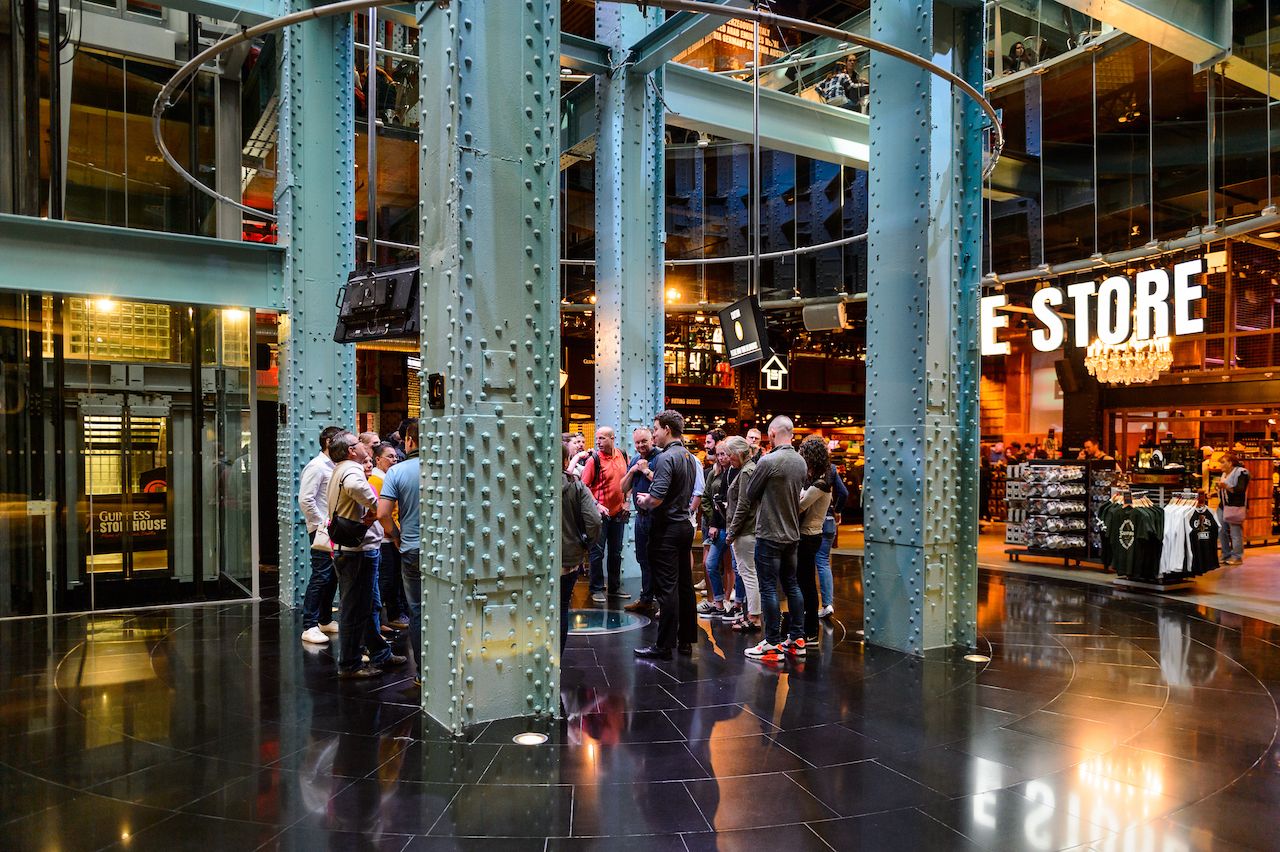 This behemoth of a museum is where you can learn about the history of the “black gold,” as it’s known here, along with the influence of the Guinness name throughout Ireland. The self-guided tour starts with a replica of the 9,000-year-long lease signed by Arthur Guinness back in 1759 for the property. You’ll also learn what makes the Guinness flavor distinct (hint: it has to do with roasted barley). Winding your way up through the multi-level interactive museum is part history lesson, part science class. By the time you reach the fifth floor Guinness Academy, you’ll have a newfound appreciation for the craftsmanship that goes into each pint.

Speaking of pints, all tickets include a complimentary pour, so take a break here and put your bartending skills to the test. The moment you pick up your glass to the moment you serve a pint of Guinness is 119.5 seconds — very specific, perhaps, but a tip you’ll hear often as the brand is quite protective of its presentation. By the time you leave the fifth floor, you should know how to pour the perfect pint in these six essential steps:

1. Have a clean pint glass with the iconic harp logo
2. Hold pint at a 45-degree angle
3. Pull handle down and fill three-quarters full
4. Leave to settle
5. Top up by pushing handle backward
6. Serve with logo facing customer (yourself, in this circumstance)

Step seven, of course, involves pulling up a stool and sampling the goods.

Beyond the pour lesson, the museum charts the 260-year-old company’s radical developments in both production and marketing, from building their own railway lines and power plants to moving from wood to steel barrels. According to the videos and signage throughout the storehouse, the company’s modern vision is to continue to look forward by developing a new generation of Guinness drinkers who want their beer served with a “side of fun.” Cue the Stoutie bar, where you’ll be taken into the photo booth for a quick snap, and a minute later, you’ll have a pint of stout with your face printed on it using spent malt (selfie on a stout = stoutie.)

Round out the visit with a drink at the recently renovated top-floor Gravity Bar, which has 360-degree views of Dublin. From here, you can also see the sheer scale of the brewery’s operations. Keep an eye out for the hidden courtyard strewn with festoon lights, where you’ll be heading next if you’re in the know. 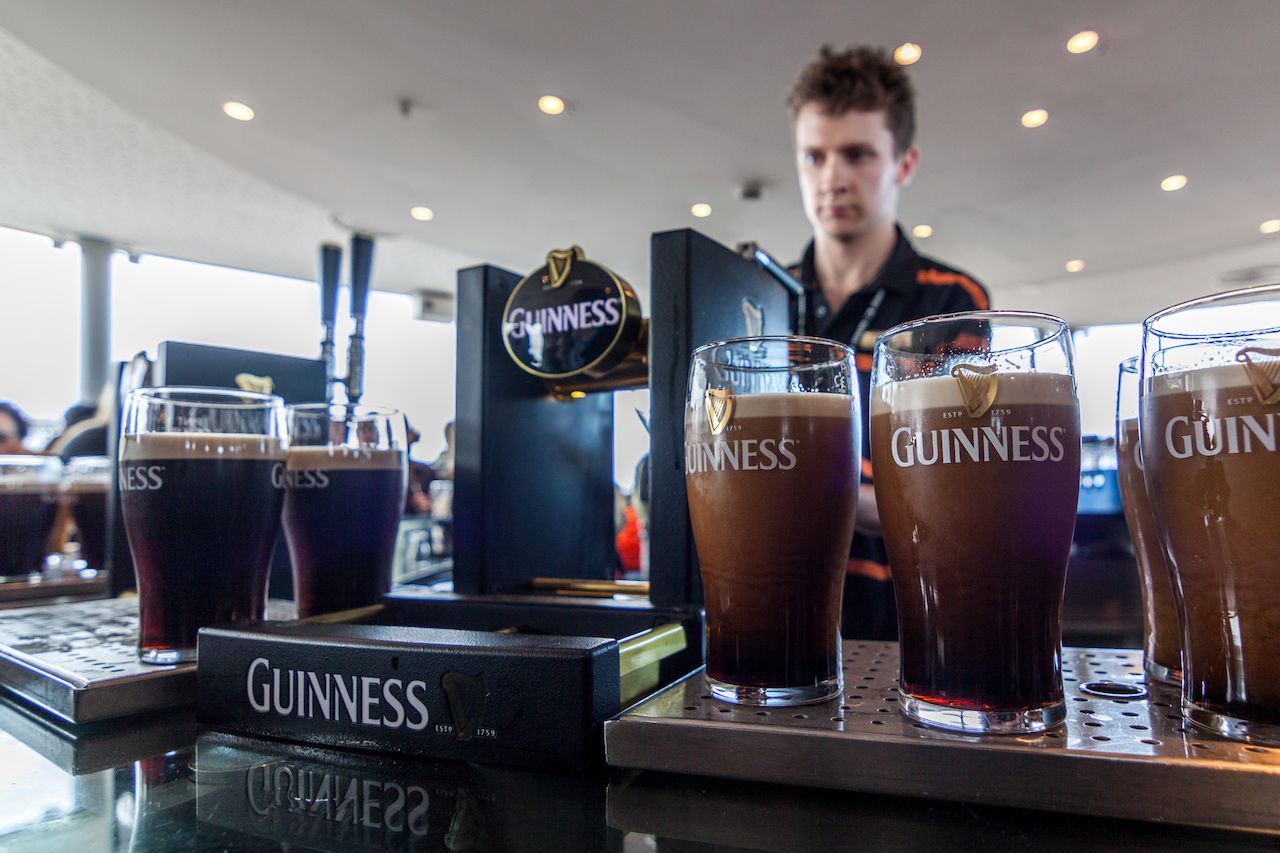 After touring the Storehouse, a proper Dublin “Guinness Test” continues on site and then at other spots throughout the city. Guinness is on a mission to prove there’s a beer for everybody, according to Open Gate Brewery’s general manager, Padraig Fox. Open Gate Brewery is the company’s experimental lab turned into a bar, tucked in the back streets of the Guinness headquarters. The antithesis to the storehouse tour, this brewery bar is about intimacy, connection, and céad míle fáilte, an Irish greeting meaning “you are welcome, a thousand times, wherever you come from, whosoever you be.”

Only 150 guests with pre-booked tickets (nine euros, or about $10) are welcomed in behind the heavy black gates every Thursday, Friday, and Saturday evening. This intentionally small crowd gives everyone a seat and the chance to discover the beers through a customized beer-tasting flight filled with experimental brews made right here.

“If you think you don’t like beer, we’ll do our best to change your mind by the end of the night,” Fox says. “A lot of people say I don’t know what I like, can you help me? If you’re someone who, god forbid, doesn’t like beer, we think you just haven’t found a beer you like. So what we’ll do is give you something nice and light at the start like a pilsner or a helles and work our way up to something barrel-aged. So you can date lots of different styles and flavors in your flight before committing to one.”

And there’s no shortage of different styles and flavors here. The bar lies in the heart of Guinness’s century-old experimental brewery. In what is arguably the world’s best job, a team of five brewers here work under the motto “anything we dream up, we can brew up.”

Fox and the brew team at Open Gate have free rein to experiment with flavors, ingredients, and brewing methods, while visitors get to be the proverbial guinea pigs as a new beer is rolled off the brewing process weekly to be tasted and then voted on. If it gets enough votes, it might just make its way out of the gates and into large-scale production. Some of the more memorable brews that have passed through the taps here include “sea salted caramel stouts, botanical ales, hibiscus infused lagers, strawberry stouts, and rebrewed historical Guinness brews from 1897,” Fox says.

The focus is on beer (and a few soft drinks), but for staunch non-believers, they’ll whip up a beer cocktail such as a peachy hop house Bellini or an Espresso Stout Martini. Your $10 ticket gets you a tasting flight of four beers, plus a license to “stay as long as you want, have some beers, learn something new and test your tastebuds,” says Padraig.

Go behind the scenes 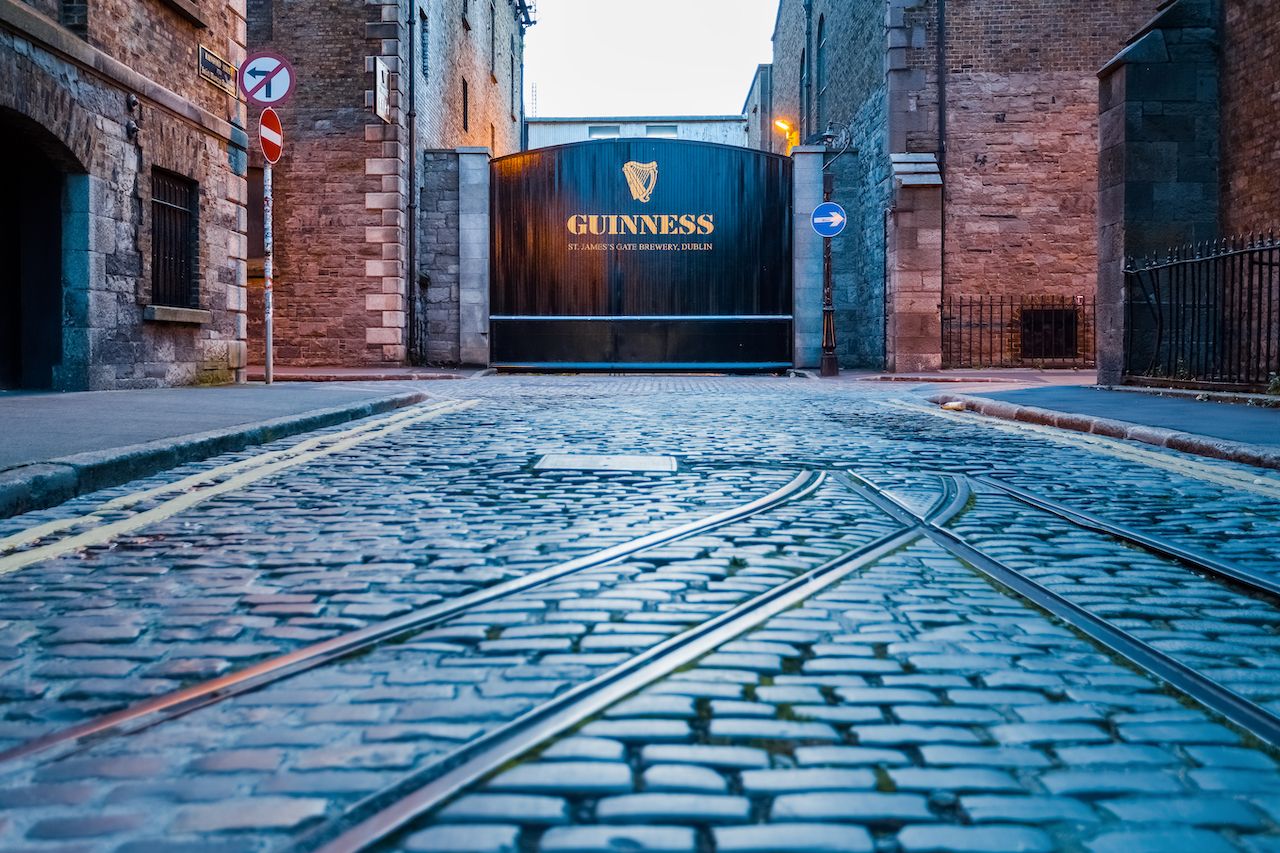 The newest experience for the diehard Guinness fan is the brand new “Behind the Gates” tour launched in early 2020. Over three hours you’ll be led by a beer specialist through the Roast House where you can check the thermometer reading for the perfect 232C roasting temperature, see the original 200-year-old vats and follow the underground passenger tunnel into the Open Gate Brewery for a private beer flight.

After you’re sufficiently refreshed, you’ll make your way back to the main Storehouse where you can tour the museum, before culminating in a beer and food matching class to ease those hunger pains at Arthur’s Bar in the Guinness Storehouse.

Tickets for the tour are $105 per person.

Dublin’s best pubs for a pint of Guinness 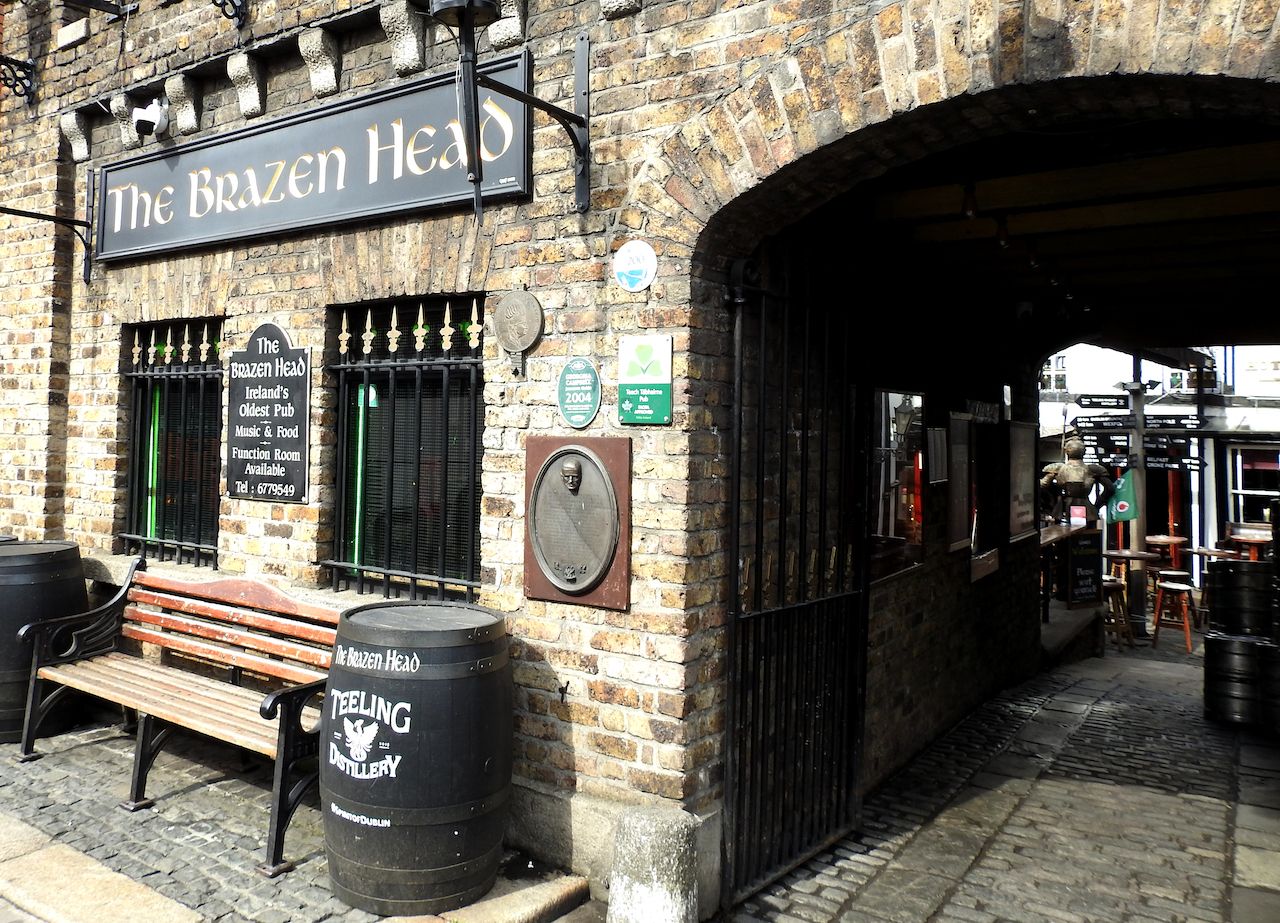 There’s a myth going around between Guinness drinkers that a pint in Ireland tastes different — read, better — than it does anywhere else.

Fox told me that the exact same brew is shipped around the globe, and that any difference to the palate can be chalked up to sensory experiences.

“If you’ve just been to Ireland and you’ve had the best weekend ever with a pint of Guinness in a pub in Dublin with music and friends, it’s not quite the same as going back to a quiet bar at home. You lose that sensory experience,” he says.

If you want to test the theory, these eight pubs have all been given the tick of approval by the self-professed beer nerd and Dublin local.

Grogans: Wash down your pint with an Irish cheddar cheese and ham toastie for the ultimate local foodie experience.

The Brazen Head: Dublin’s oldest pub dates back to 1198 and is just a short walk from the Storehouse. Live Irish music most nights guarantees a night to remember.

Toners: Rory Guinness claimed the city’s best pint of Guinness is here at Toners. Order a pint and settle into an old Irish snug, or head out back to the generous beer garden to catch some sport on the big screen.

The Long Hall: Rumoured to be Bruce Springsteen’s pub of choice when he visits Dublin, this vintage establishment exudes genuine Victorian originality and ornate charm.

McDaids: On the site of the former city morgue, the boozy pubs most famous regular, Irish poet Brendan Behan describes the atmosphere best: I am a drinker with writing problems.

Stag’s Head: In the heart of the buzzing Dame District, this Victorian pub has regularly been named the city’s best thanks to its cozy wooden snugs, live music, comedy, and hearty meals.

Fallons: The bartenders here credit a very short draw from the keg as the secret to continually making it on the list of best pints in the city. That, and the cozy, old-man pub atmosphere full of locals.

Where: 129 The Coombe, The Liberties

Palace Bar: Another Victorian-era jewel, this is a wee locals pub to escape the crowds at nearby Temple Bar.

Restaurants + BarsThe Best Non-Touristy Pubs in Dublin To Drink at Instead of Temple Bar
Tagged
Beer Restaurants + Bars Insider Guides Dublin, Ireland
What did you think of this story?
Meh
Good
Awesome

9 Things I Wish I Knew Before Visiting Dublin