The Guinness brewery opened in Dublin, Ireland, in 1759. Since then, it’s become one of the most ubiquitous beers worldwide. With that popularity and ease of access comes a lot of mythology.

We determined fact from fiction with studies and the help of Heather McReynolds, a social media correspondent with Guinness. She’s spent 10 years in the beer industry, from head brewer at The Cannon Brew Pub in Columbus, Georgia, to brewing manager at Sixpoint Brewing in Brooklyn, New York, to her current role with Guinness. 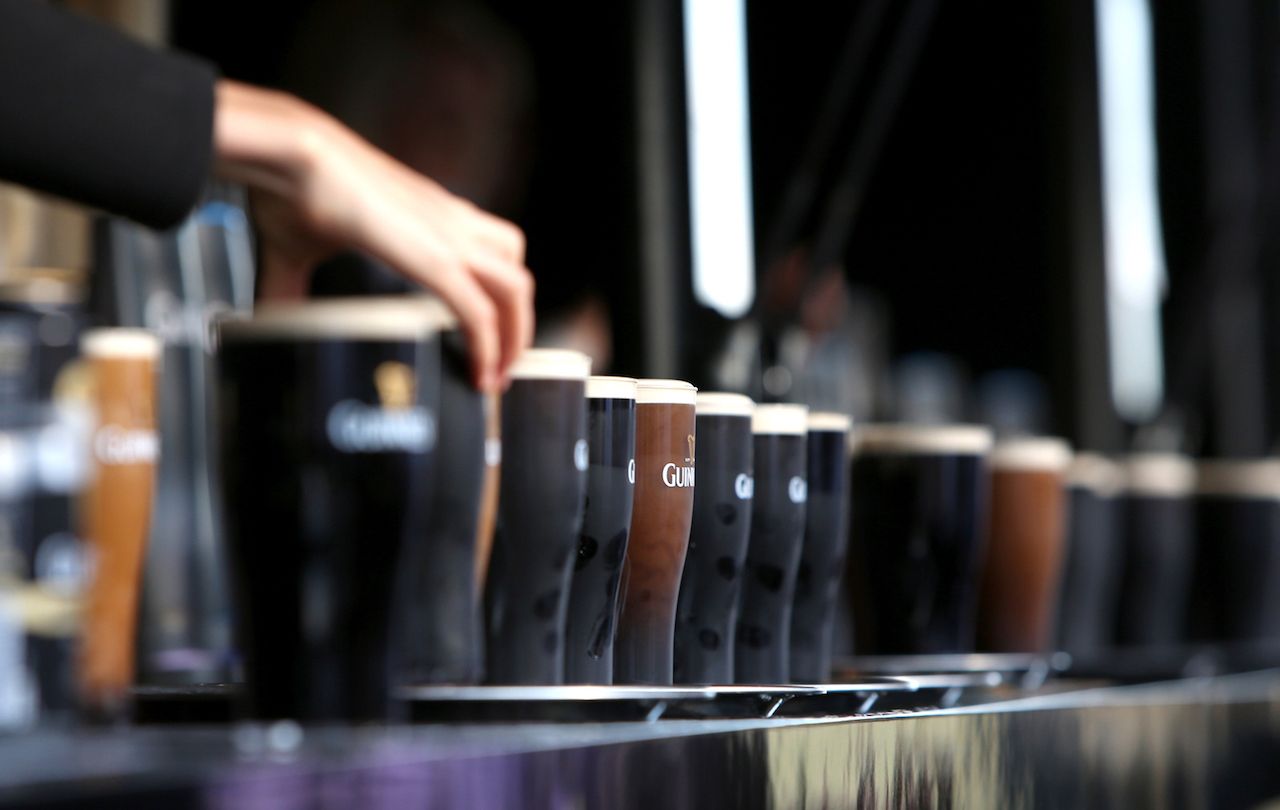 “I do get a little upset when people say Guinness only tastes good in Ireland, or you that you can’t get a good pint of Guinness in the states,” McReynolds says.

This myth about Guinness has taken over the way people talk and think about the beer. There’s always going to be that one person in your group who went to Ireland during their gap year at the tender age of 18 and now parrots, “It just doesn’t taste the same here.” While it’s true that location has a lot to do with how things taste, much of that is because of the associations we have about said location. As NPR learned in 2014, you can literally hack your way to a tastier meal through psychology, without changing a single thing about the actual food.

Factors that make a good pint a good pint are things like regularly cleaning draft lines. Think of beer as liquid bread, McReynolds says, that progresses from fresh to old to expired. Expired beer won’t get you sick, but it definitely won’t taste as good.

“With clean lines and the proper pour, you can definitely get a pint of Guinness in the United States that’s just as good as in Ireland,” McReynolds says. “One hundred percent.”

It all starts with the perfect pour. 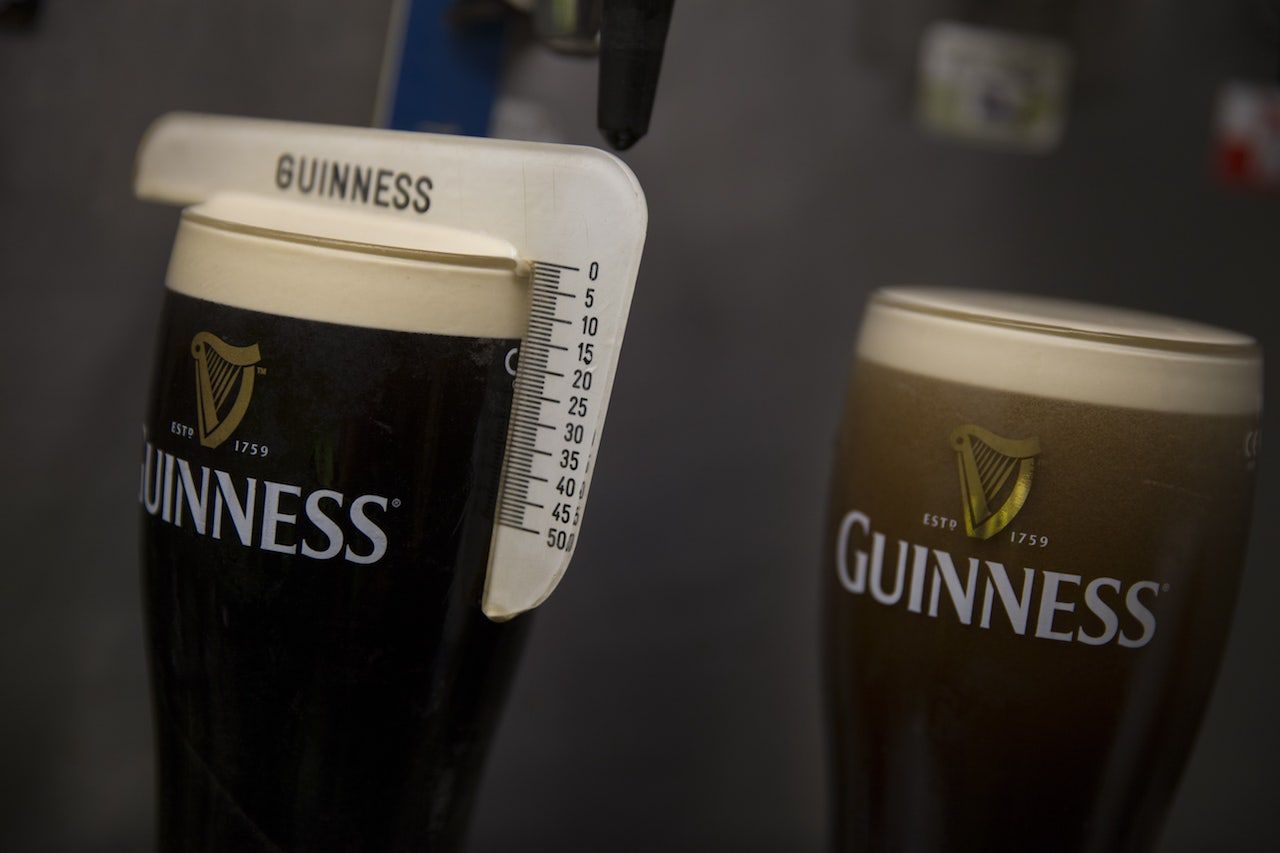 The art of pouring a Guinness is part marketing, part science. It’s known as the two-part pour and takes exactly 119 seconds. (You can probably figure out for yourself which part of that is the marketing mythmaking.)

The perfect pour starts with a clean glass. The bartender tilts the glass to a 45-degree angle and pours the beer from the tap until it’s three-quarters of the way full. Then the beer is set down and left until it’s settled. Only once that’s done is the beer filled to the top. But that doesn’t necessarily mean you get to drink the beer when it gets to you. First, you have to wait for the beer to settle, and you’ll know it’s ready when there’s a clean line separating the foam head and the dark beer. Your perfectly poured pint should have a curved dome of foam on the head that’s 15 millimeters high.

By that point, you’ve probably gotten through all of the small talk with whomever you came with, so just enjoy the beer. But following all these rules says just as much about the bar as it does about Guinness’s marketing power.

“If a bar is pouring Guinness properly, you know that they care enough to do a lot of other things properly as well,” McReynolds says. “Bars that care how they pour Guinness care a lot about other aspects of service like the way they’re pouring other beers and also the way they’re taking care of their food.

“As a consumer, you’re paying your hard-earned money for a pint of beer; it should be as perfect as it can be,” McReynolds says. “If it’s not, then you should say something.” 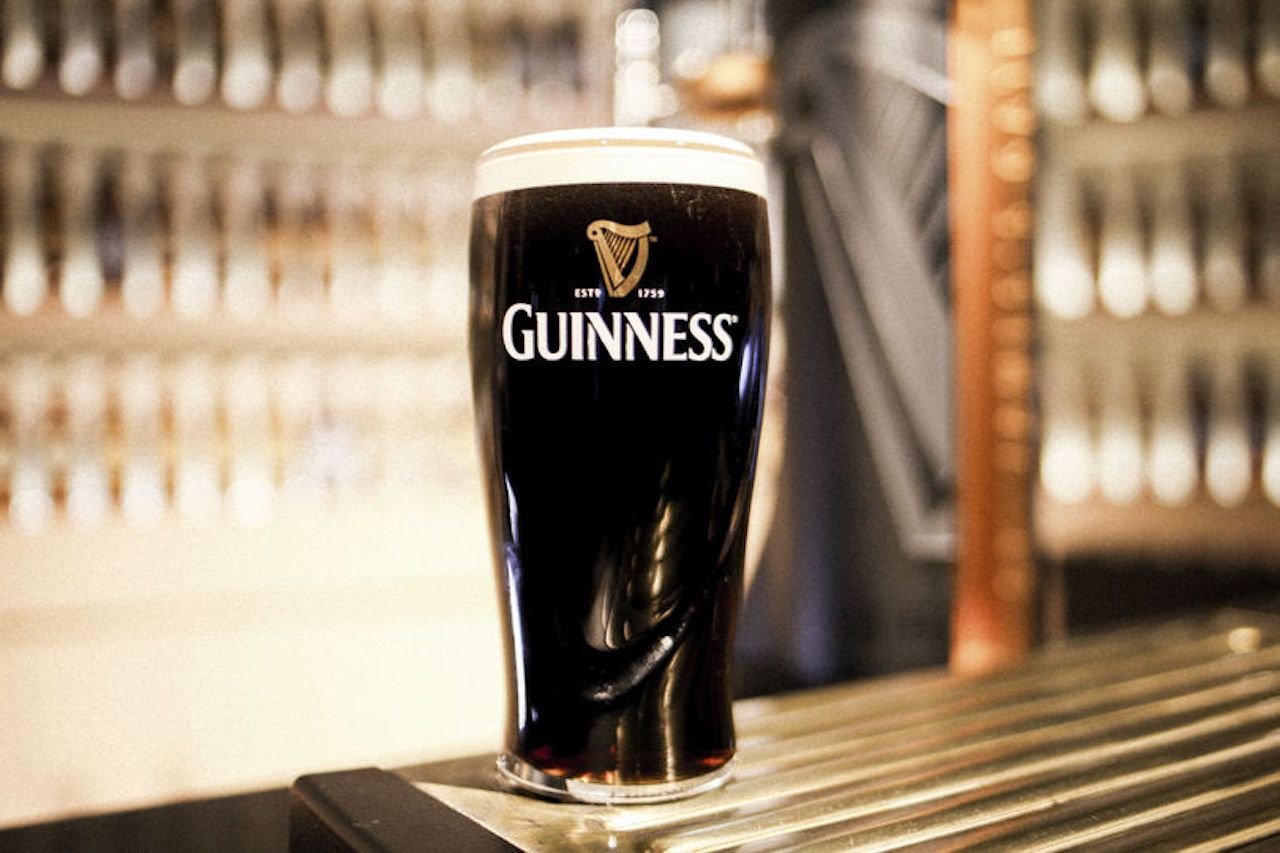 It’s common knowledge that Guinness belongs in a pint glass. For optimum taste, however, you might want to consider switching it up.

William Lee, a professor of industrial mathematics at University of Huddersfield, studied the way bubbles act in a pint of Guinness. Guinness uses nitrogen rather than carbon dioxide for its bubbles — it was the first beer to do so, in fact — which means those bubbles act differently than those in your standard brew. Guinness bubbles actually sink instead of rise, and the shape of the glass is the primary reason why.

“People think that the Guinness glass is designed to optimize the settling time,” Lee said in a press release about his study. “But now we have a better understanding of the theory behind it, we might be able to make an even better glass so that it settles faster. Unfortunately, the ideal shape would look like a giant cocktail glass!”

That would just look silly.

In other words, it’s not just where you drink that impacts the taste of your Guinness; it’s also the presentation. Take that, science.

How many sips should it take to finish a Guinness? 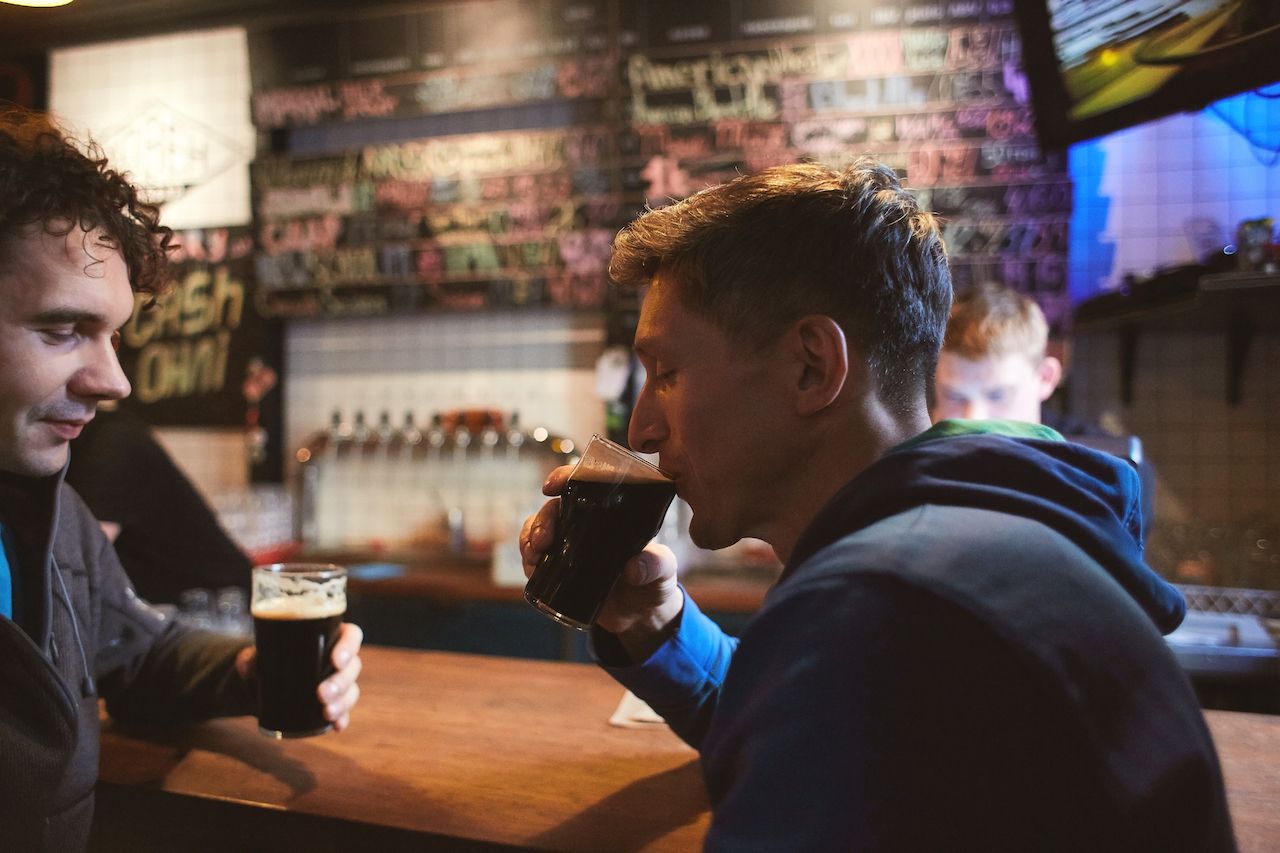 Cruise through enough online beer groups, read enough blogs, or watch enough lone Irishmen sitting at the end of the bar and you’re sure to spot a trend: People have a specific number of sips for each Guinness they drink. Sometimes that number is four, sometimes it’s eight, and sometimes it’s any random number between four and eight.

The idea behind this is that the foam head of Guinness leaves a lacing at each point you drank your beer down. For example, if you took four sips, there would be four lines of foam lacing on your glass when you finish.

“I think the idea behind it is machismo,” McReynolds says. “I think you should be able to drink your pint of Guinness in as many sips as you feel comfortable drinking it, and we always try to promote responsible drinking.”

So ignore the online trolls and crusty old men. Sip away however you see fit.

Drink up because it’s a light beer. 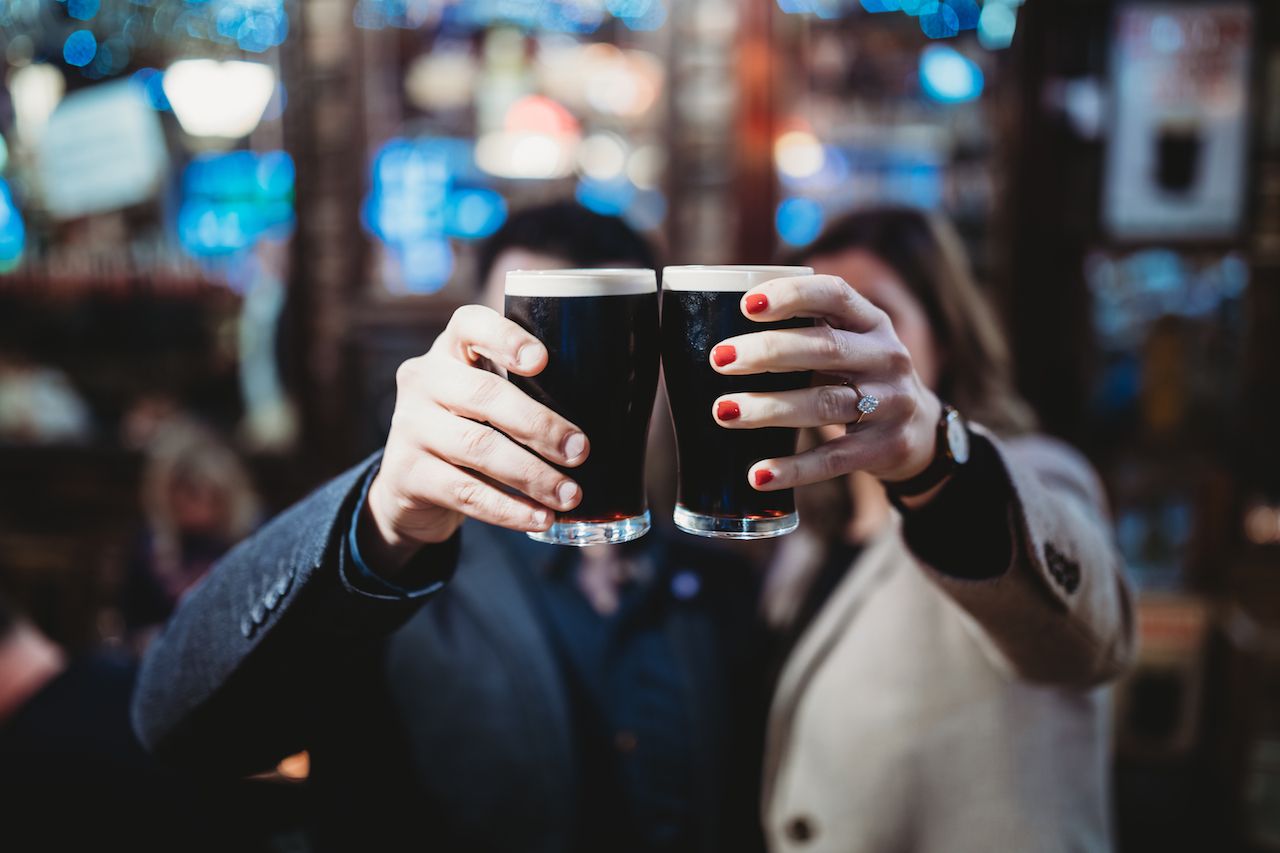 “I get so bummed when people look at a Guinness and say, ‘No I can’t drink that; it’s so heavy,’” McReynolds says. “Even our biggest fans online still refer to it as a meal in a glass. Guinness is 4.2 percent alcohol, not some big heavy imperial stout. It also has 125 calories.”

The dark, almost black, ruby color comes from the toast level of the malts, not anything having to do with the strength of the beer. Another thing that’s added to this weighty perception of Guinness is the foods that people eat with Guinness. Fish and chips, for example, or pretty much anything fried. Instead, you should be looking lighter.

“Oysters and Guinness are the classic combo,” McReynolds says. We each slurp one down with just a bit of lemon squeezed over the top, and then take a sip of beer. The briny oyster compliments the coffee and chocolate notes in the Guinness, but then again, pretty much every type of alcohol goes well with oysters. Not every pairing have been around as long, though.

“This pairing has been around for, like, over 100 years,” McReynolds says. Dublin is situated on the water, and its first big export market was England. Back then, oysters were working class food. Somewhere down the line, these dock workers realized their cheap snack of oysters paired perfectly with their midday pint.

BeerThese Cities Sell the Cheapest Pints of Guinness for St. Patrick’s Day
Tagged
Beer
What did you think of this story?
Meh
Good
Awesome