There’s so much more to Argentina than Buenos Aires, Iguazú Falls, and Mendoza — you only have to take a road trip in Salta to find out. A two-hour flight from the capital, Salta is a somewhat off-the-radar region. Quaint colonial towns, dusty Andean villages, and wine bodegas sit framed by dramatic mountain peaks and fascinating red rock formations. Throw in some beguiling salt flats and the highest pass on any national highway in the world and it’s all rather spectacular.

If you’re thinking that this sounds ideal for a road trip then you’d be absolutely right. Winding through the province is Argentina’s mythical Ruta 40, a national highway that stretches some 3,227 miles from the top to the bottom of the country. Salta’s section runs for about 220 miles and includes both paved and dirt track sections. You could cover it all in one long day of driving but you’d be missing out on a lot of fun if you did. For the most comfortable experience — and to ease your way around the dirt highway areas — we recommend going by 4WD drive vehicle or motorbike. Check out Cactus Rent a Car and Moto Alquiler Salta for options. Now here are some of the not-to-be-missed stops for your road trip in Salta, Argentina. 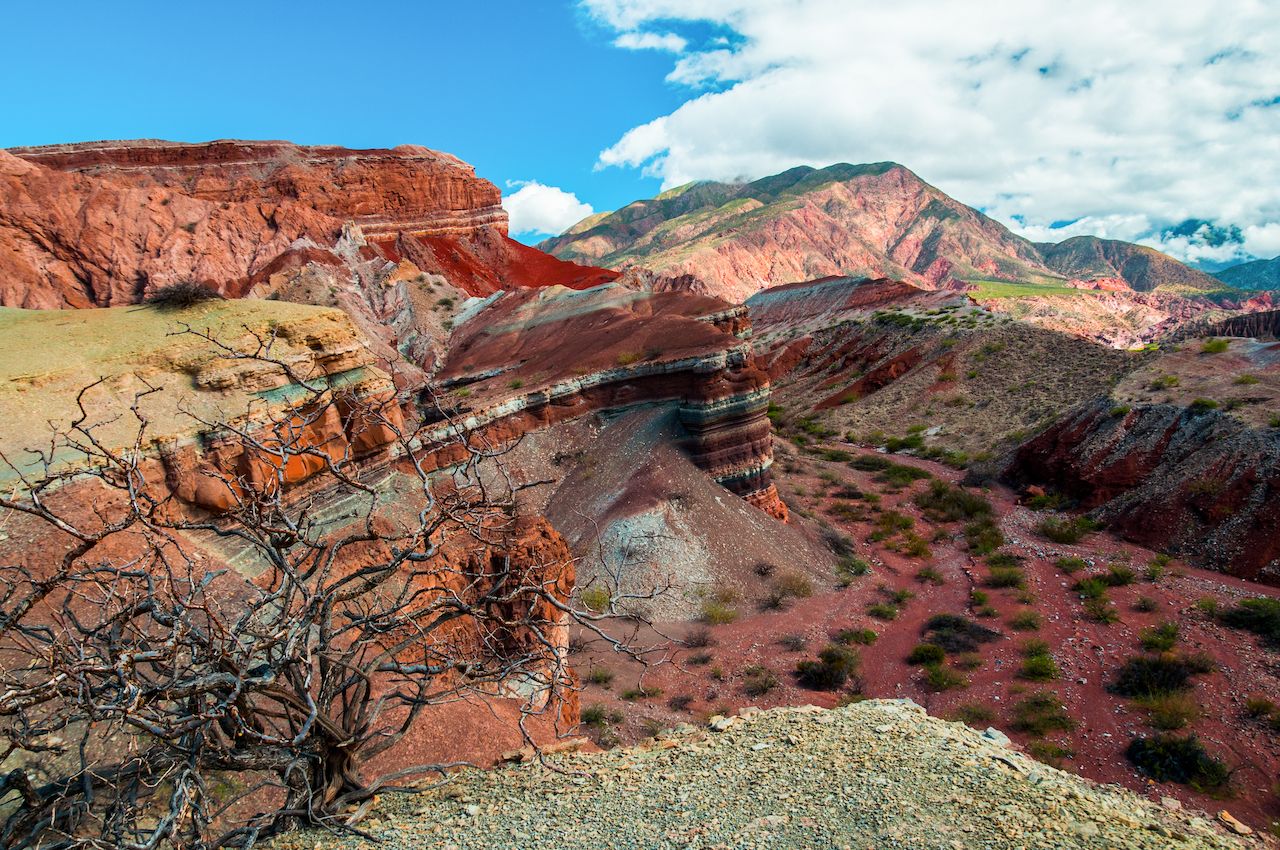 The first stop, and where the journey along Ruta 40 begins, is all about discovering the viticulture of northwest Argentina. However, before that there’s the small matter of arriving from Salta via the iridescent red-hued landscapes of the Quebrada de las Conchas (Canyon of the Shells). If you haven’t visited the Grand Canyon then this might just be the next best thing. Extraordinary rock walls shaped over millennia rise above a muddy river to create an otherworldly scene. It’s a three-hour straight drive through the canyon to Cafayate along Ruta 68, although you’ll want to pull over to capture the moment. Devil’s Throat, the Amphitheater, and the Toad are all worthwhile pit stops. 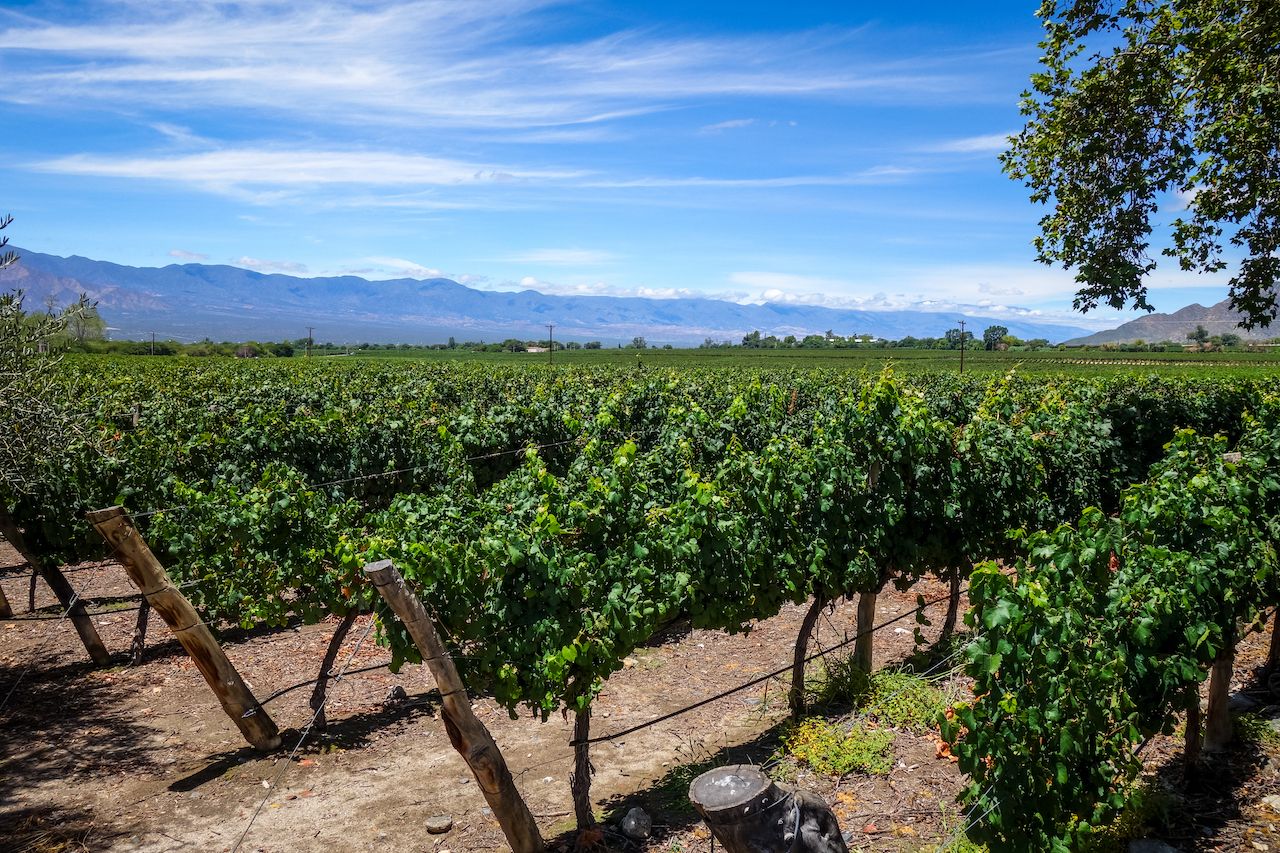 Cafayate itself is a busy colonial town in the Calchaquí Valley. It’s the heartland of Salta’s wine-making, as well. Dozens of bodegas, famous for their production of aromatic Torrontes white wines (and quintessential Argentine Malbecs), pepper the outskirts. Some, such as Bodega el Esteco and Bodega Vasija Secreta, are only a short stroll from the town center so you can park up and avoid any discussion about who’ll be the designated driver. You’ll probably want to stay the night here and can do so in style at the elegant winery-cum-hotel Patios de Cafayate. 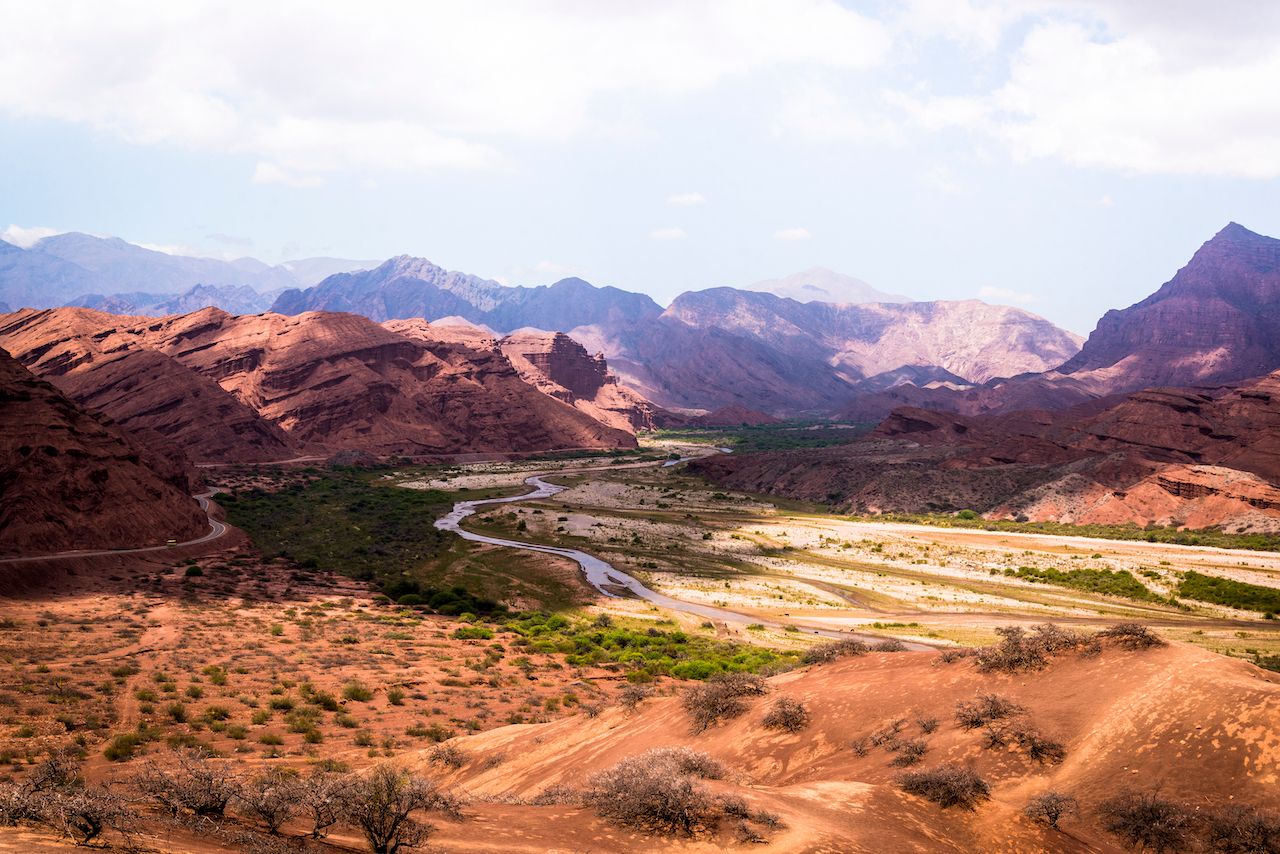 From Cafayate, Ruta 40 meanders past vineyards and sleepy towns as it travels deep into the wild landscapes of the Calchaquí Valley. In about half an hour you’ll reach San Carlos, whose tree-shaded main square appears lost in time with its graceful arcades and white chapel. After another 30 minutes, the road climbs into the Quebrada de las Flechas (Canyon of the Arrows). With beige-colored cliffs rising up like arrowheads it’s easy to see how the canyon got its name. There are several rest stops and lookouts to get out and bask in the lunar-like setting. 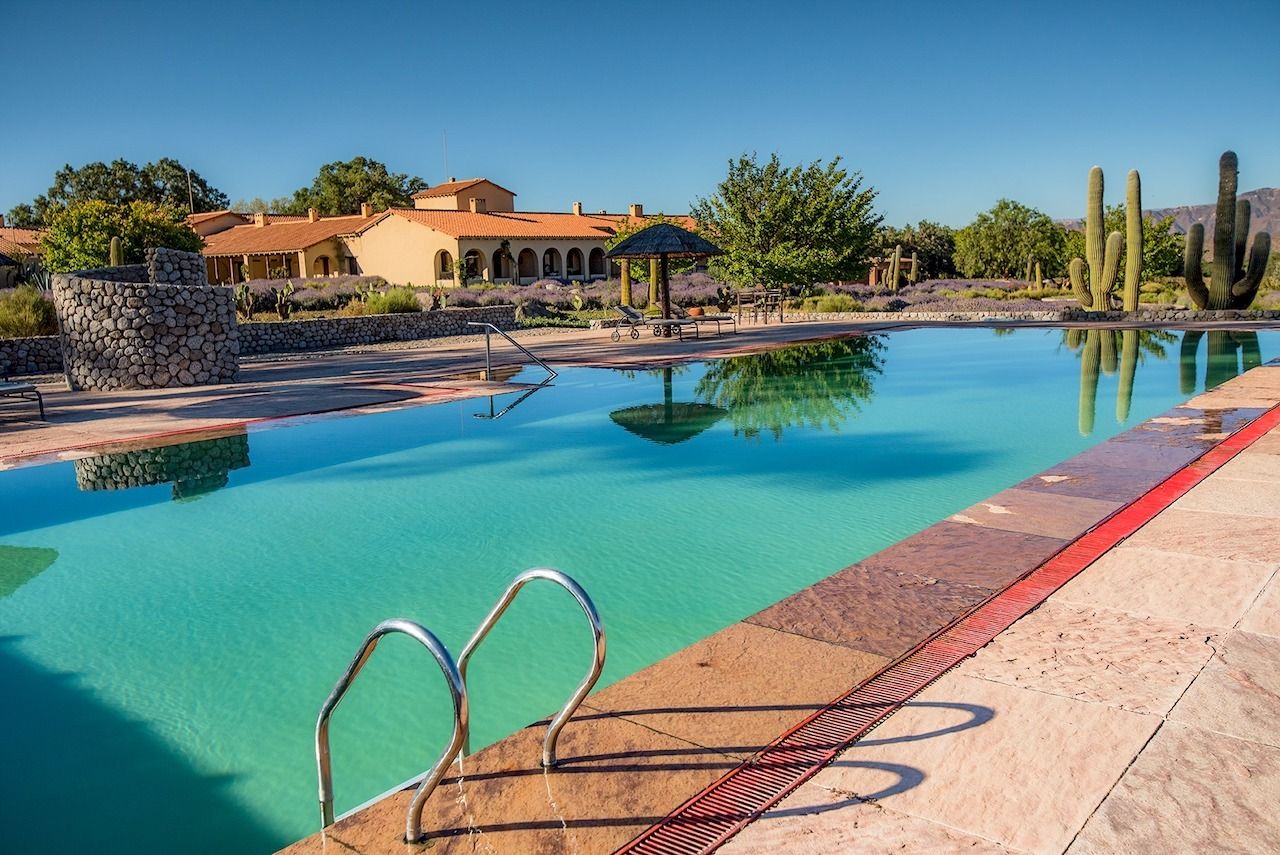 If you’ve driven enough for the day, stay at the nearby Estancia Colome. It’s a winery and hotel where the stargazing is superb and there’s the chance to ride horseback over high-altitude plains. Otherwise, continue for just over two hours along the rocky, cacti-lined highway and across bridge-less rivers to Cachi. Maybe it’s the adobe homes, cobblestone plazas, and Spanish church, or perhaps the snowcapped Andes and clean air, but Cachi really has that jaw-dropping sensation. Pass by the Pio Pablo Diaz Archeological Museum to find hundreds of treasures excavated in the Calchaquí Valley. It’s on the main square, which has its fair share of bars and restaurants with outdoor seating. 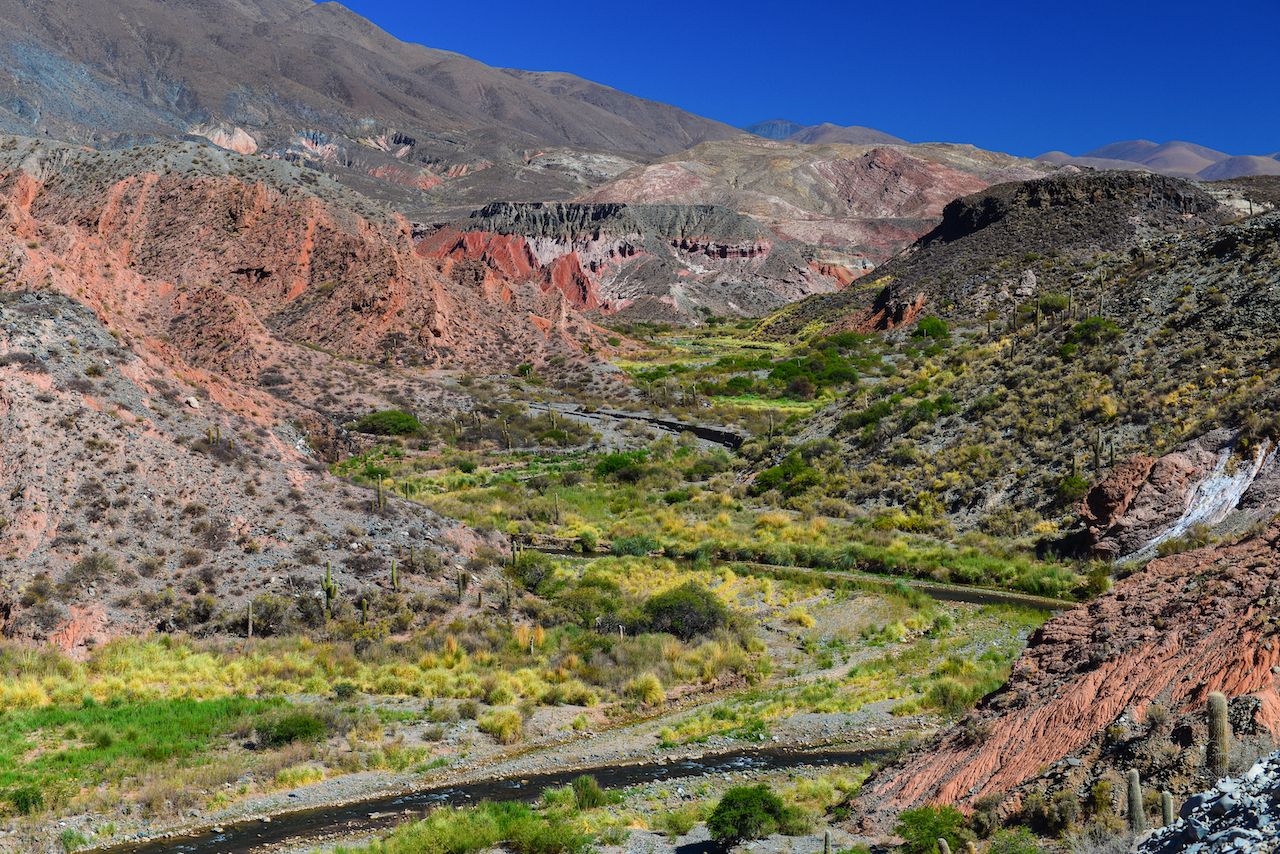 We aren’t saying that you should incessantly show off about your vacations, but bragging rights are part and parcel of traveling. A little over 60 miles from Cachi, the meandering highway becomes a wondrous section of chicanes and switchbacks upon reaching Abra del Acay. At approximately 16,000 feet above sea level, this is among the highest mountain passes on the planet (only those in the Himalayas surpass it). It’s an arduous and isolated drive with some sheer drop-offs, so you’ll want to take it slow. Those up for the challenge, though, will find that the panoramic mountain views, including the summit of the almost 20,000-feet-tall Nevado de Acay, are unprecedented. Fill up with gas and pick up water and food supplies at La Poma, because afterward it’s just the thrill of you and the open road.

Tip: Check the road conditions with locals before setting off; it can be impassable due to summer floods and winter snowfall. Also, register your departure at La Poma police station; they’ll come looking for you if you don’t register your arrival after crossing the pass. 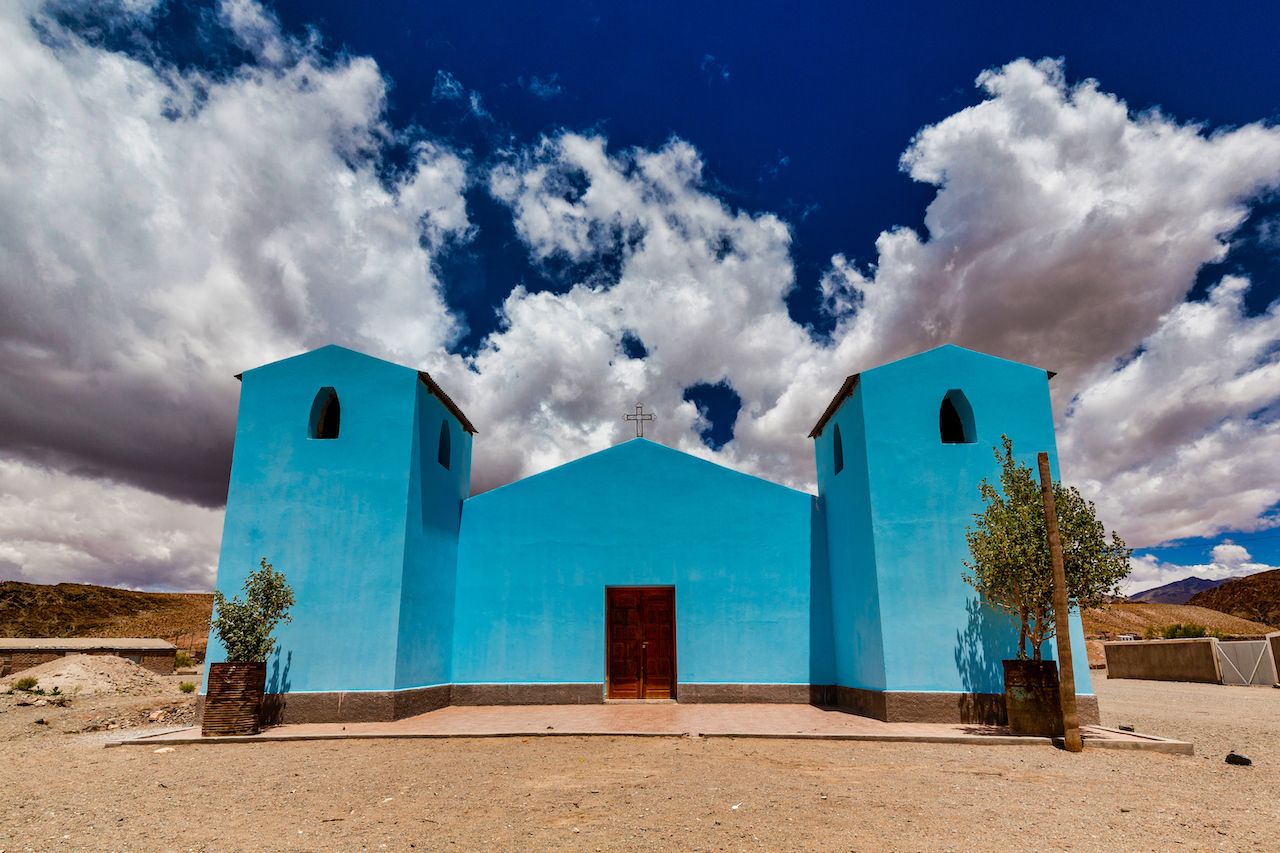 At the northern end of the mountain pass, the route drops down into the Puna — the local name for the upland plateau in the Andes foothills — and toward San Antonio de los Cobres. This mining town is the last notable settlement on Salta’s Ruta 40 and a good place to stock up before deciding on your next destination. While here, you can gain an insightful overview of life in the Puna at the small Museo Regional Andino. 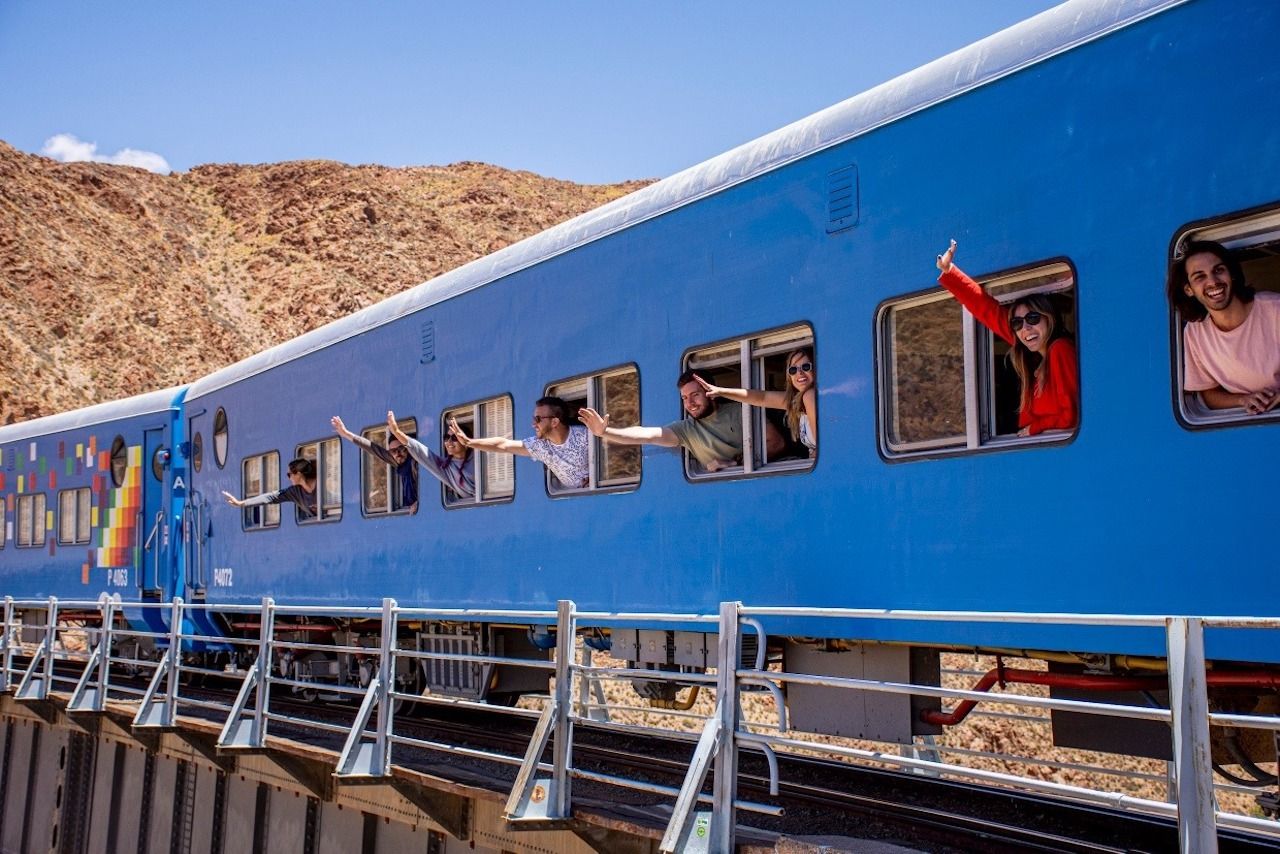 Should you be in the mood for more adventure then consider adding a trip on the Tren a los Nubes (Train to the Clouds) to the itinerary. Departing from the town center, the train trundles around the arid mountain sides of the Puna to the Viaduct Polvorilla. There’s a brief break to snap photos from 200 feet above a ravine before riding back to town.

Note: A bus service travels from Salta to San Antonio de los Cobres to link up with the train. Visiting villages and natural wonders en route, it’s a recommendable alternative if you’re a train fanatic and pressed for time. 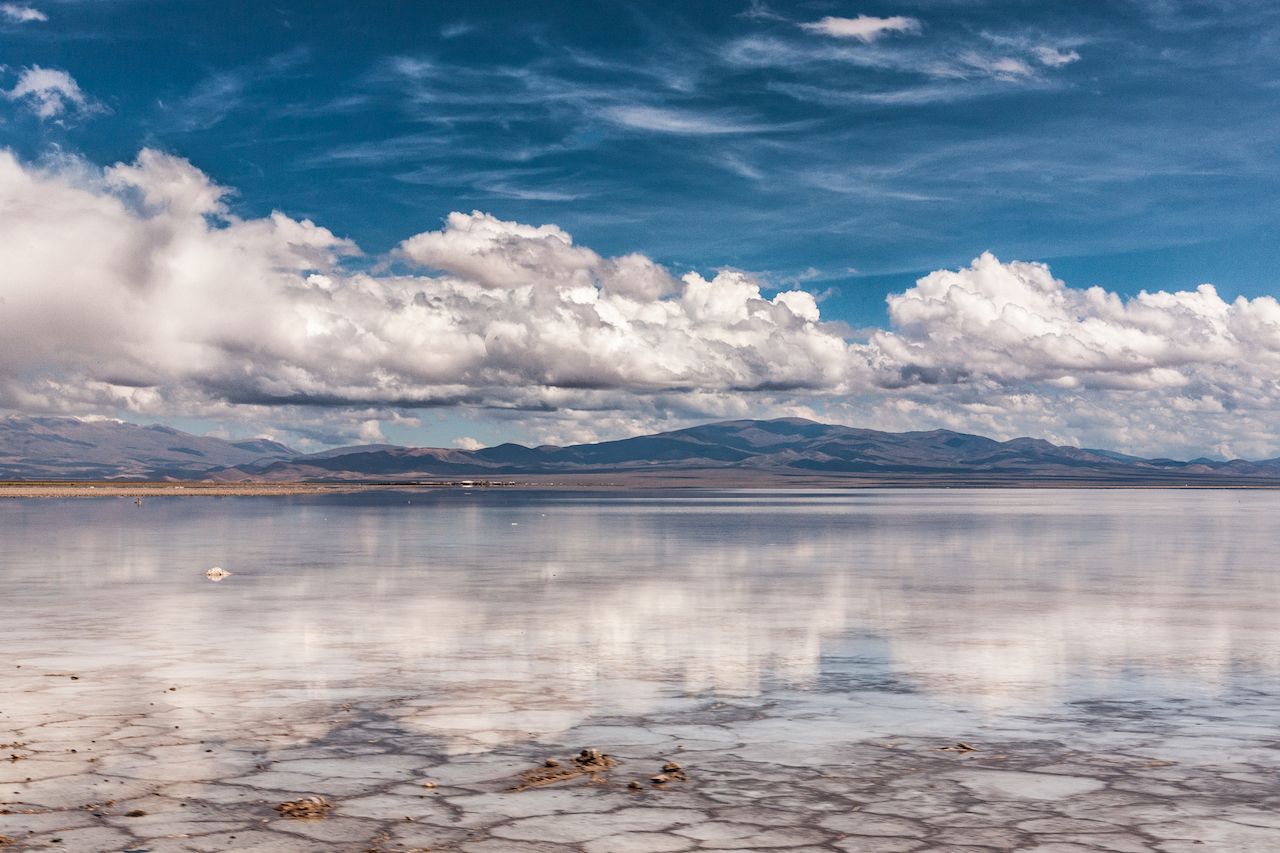 To get more of that ethereal and away-from-it-all feeling, swap Ruta 40 for Ruta 51 and drive to the Salinas Grandes. This white salt desert covers 82 square miles on the border of the provinces of Salta and Jujuy and is one of Argentina’s seven natural wonders. The backdrop of the Puna highlands does a fine job in adding to the mysticism. Visiting the salt flats is a simple task. A road, which resembles more a low-lying bridge, crosses the northern part. Pull over and stretch your legs with a walk over a vast salty ocean. Budding photographers will have a blast creating disproportionate shots and mirror images.

From Salinas Grandes it’s a three- to four-hour drive back to Salta, which demonstrates how easy it is to get lost in the Argentine wilderness while being so relatively close to urbanization.