Umbrella Alley sounds like a place in London where Hogwarts students might go to peruse muggle paraphernalia. It’s actually an interactive mural exhibition in San Francisco, but the open-air art gallery does have a couple of things in common with the shopping lanes of the Potterverse. For one, you might not realize it’s tucked away in Fisherman’s Wharf unless you know to look for it. (Hint: Look for psychedelic sidewalk chalk and a ceiling of balloons.) Like the wizarding world, it’s also pretty darn magical.

Part of what makes Umbrella Alley San Francisco so magical is that most of the murals are designed to be posed with — readymade backdrops for your Instagram feed that also homage the Bay Area. Read on to find out where you can track down the whimsical artworks, what to expect when you get there, and how to make the most of your visit.

Where is Umbrella Alley San Francisco, and how do I get there? 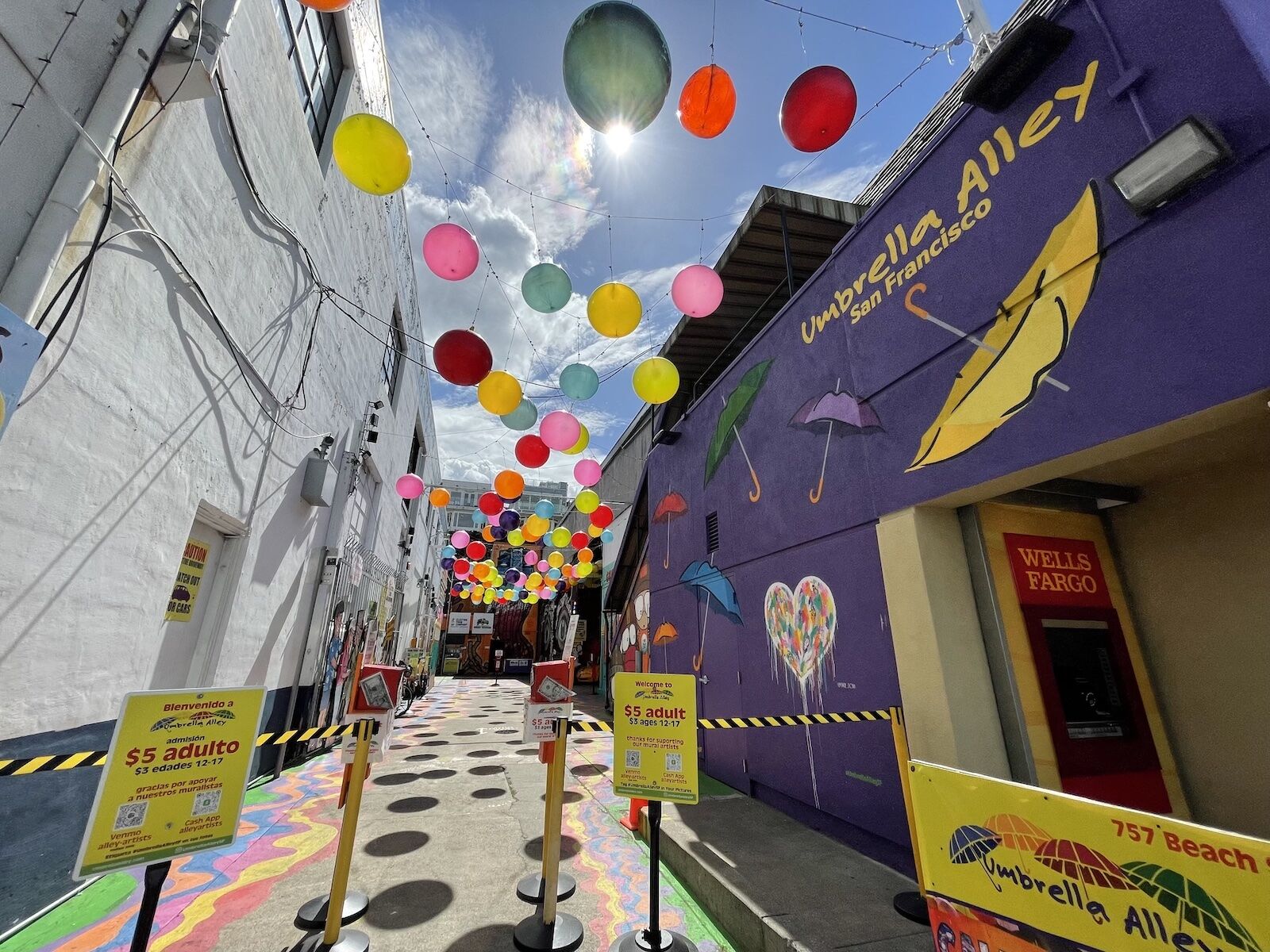 Umbrella Alley is located at 757 Beach Street between Hyde and Larkin, smack in the center of some of San Francisco’s most iconic attractions. It’s across from Aquatic Park on the San Francisco Bay, a stone’s throw from points of interest such as Ghiradelli Square and Pier 39, surrounded by must-see museums including Madame Tussauds and Musee Mechanique, and wedged between two bike rental shops, one of which is San Francisco favorite Blazing Saddles.

Capitalizing on its attraction-packed location, Umbrella Alley has partnered with multiple local operators to double as a launching point for bike, segway, jeep, and tuk-tuk tours of the city if you’d like to see more than the murals. No need to arrange a tour in advance — excursions are bookable on site.

The coolest and most colorful murals at Umbrella Alley San Francisco 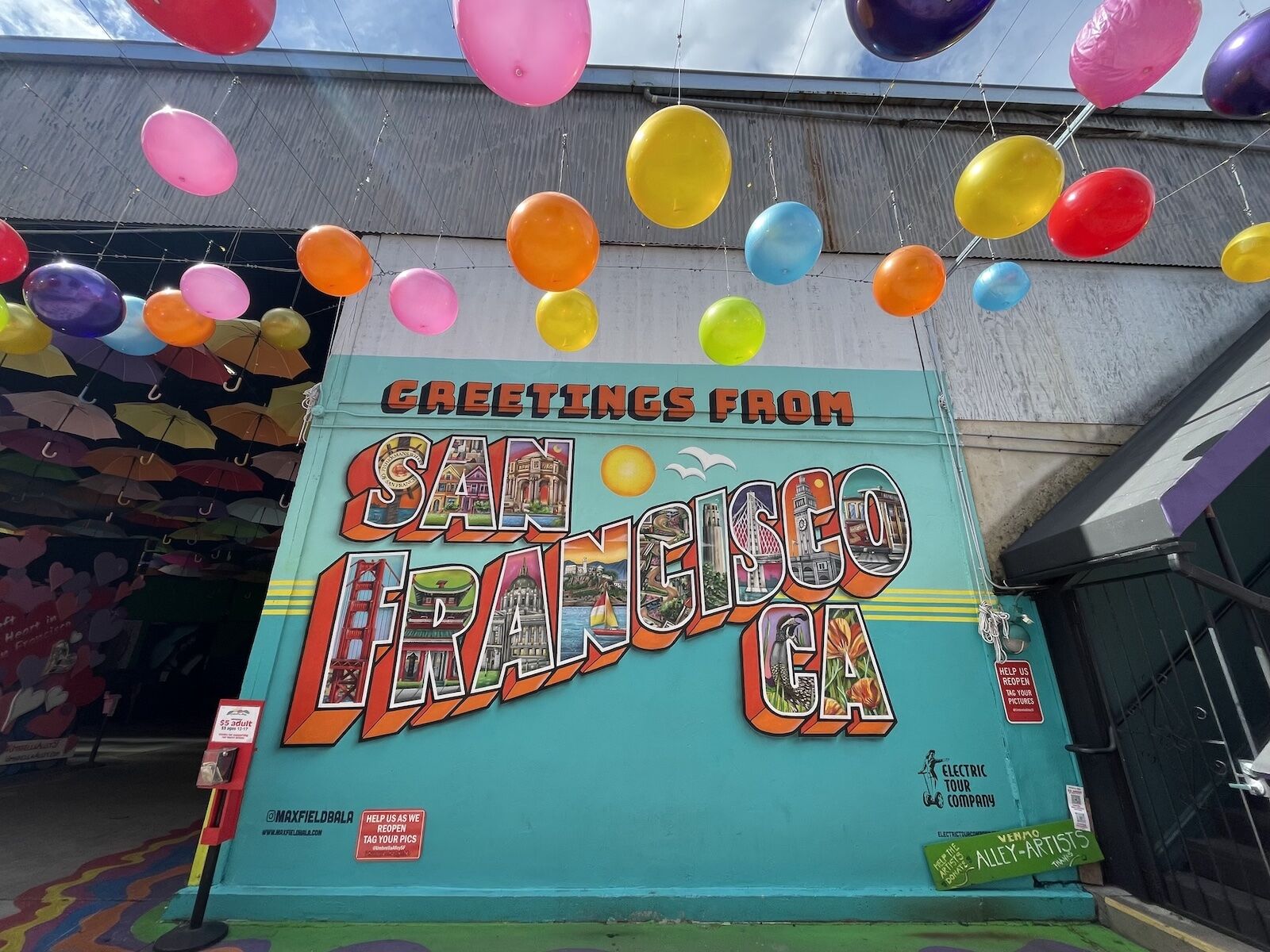 A nod to the stylings of mid-20th century postcards, this Maxfield Bala mural is quickly becoming a San Francisco attraction in its own right, but it’s also a roadmap to the rest of the city’s greatest hits. Classic landmarks such as the Golden Gate and Bay Bridges, Palace of Fine Arts, Painted Ladies, Ferry Building, Alcatraz, Lombard Street, and Coit Tower are illustrated within each of the letters. 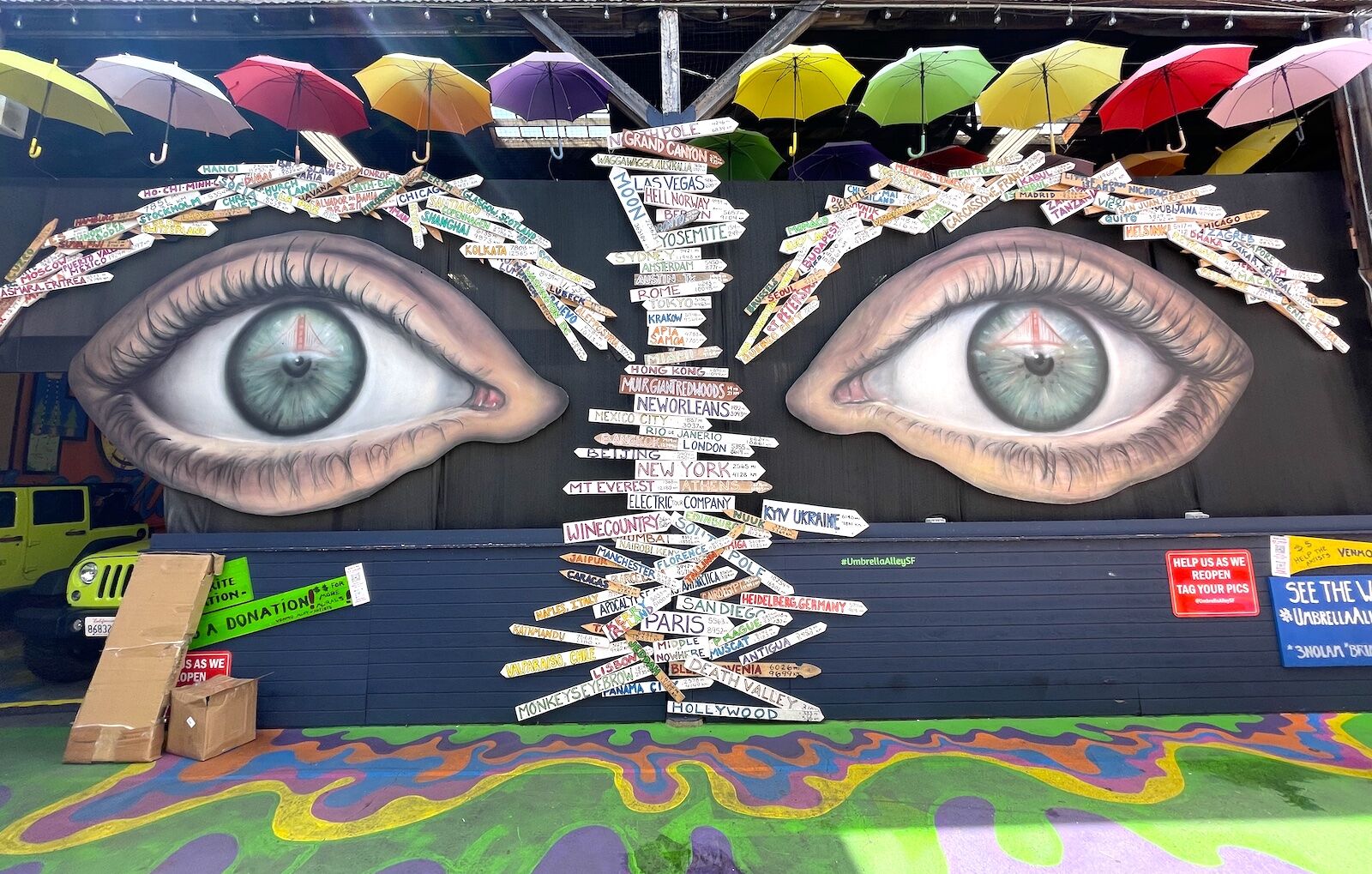 A collaboration by muralists 3Nolam and Brian Huber, this piece looks beyond the Bay Area depicting a giant pair of eyes surrounded by signs for global destinations in the shape of eyebrows and the bridge of a nose. It never loses sight of San Francisco, however, with the Golden Gate Bridge reflected in each of the irises. 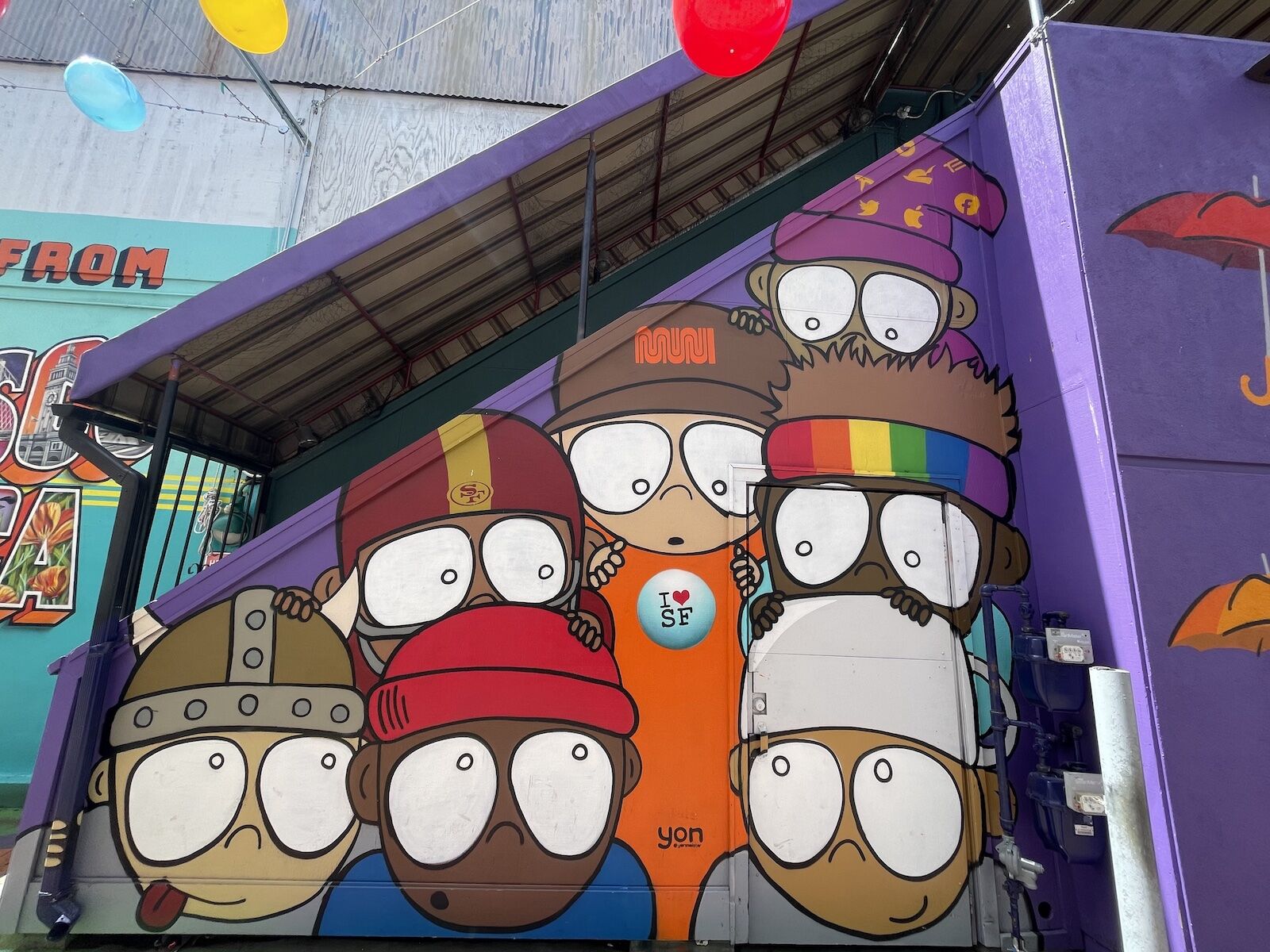 The work of street artist Yonmeister, Yon for short, this is one of the first murals you see when you enter Umbrella Alley. The cartoon-style portrait of San Francisco residents donning Bay Area-inspired headwear is spray-painted on the side of a purple staircase. Stand beneath the “I heart SF” pin to snap a photos as one of the homies. 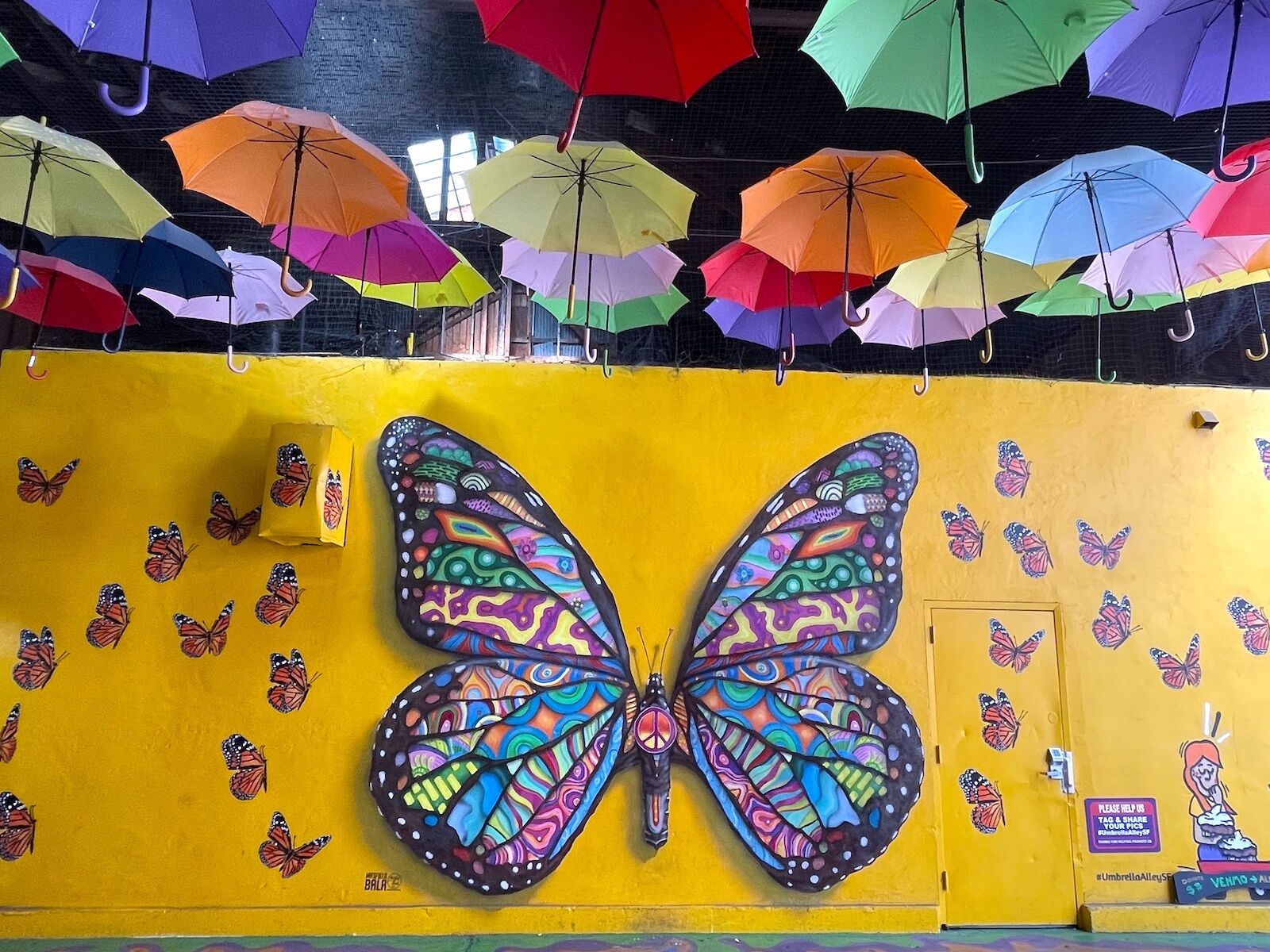 This mural by Maxfield Bala and Jeremy Novy lets you wear the wings of a giant monarch butterfly — only instead of realistic black-and-white coloring, the monarch’s wings feature psychedelic designs. The patterns are reminiscent of street art you might see in Haight Ashbury, the epicenter of San Francisco’s counterculture movement in the 1960s and 1970s. The mural’s name, the Summer of Love, references the height of the Haight’s hippie days in 1967.

I Left My Heart in San Francisco 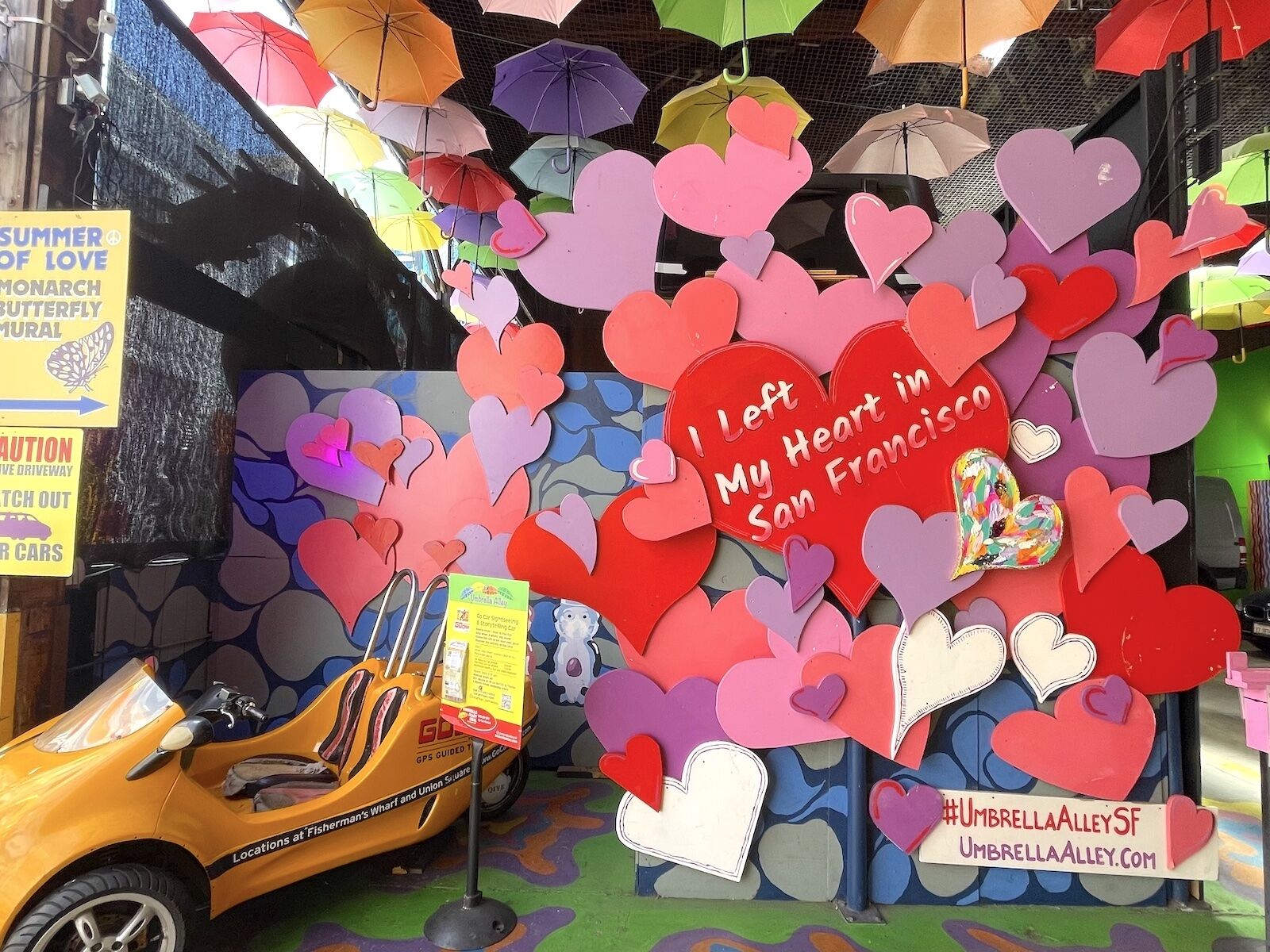 Originally, this piece by Brian Huber was presented like a bouquet of heart-shaped ballons that you could pretend to hold by the strings. Now, the individual hearts are clustered like a cloud next to a yellow GoCar, a type of three-wheeled rental vehicle that tourists are regularly spotted driving around Fisherman’s Wharf. The multicolored heart in the front was created by a different artist, Kate Tova, and matches a larger spray-painted version of the same design near the alley’s entrance. 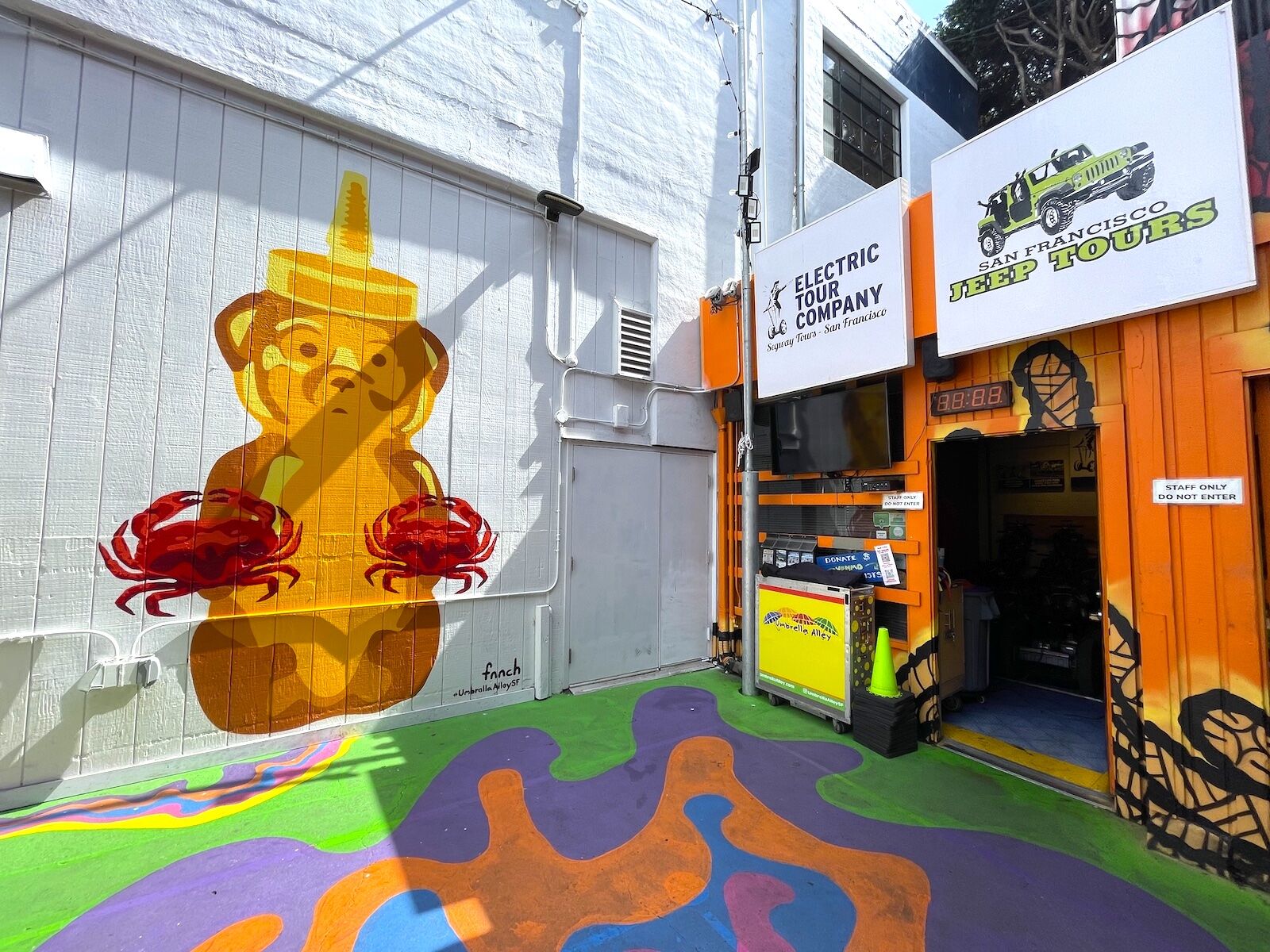 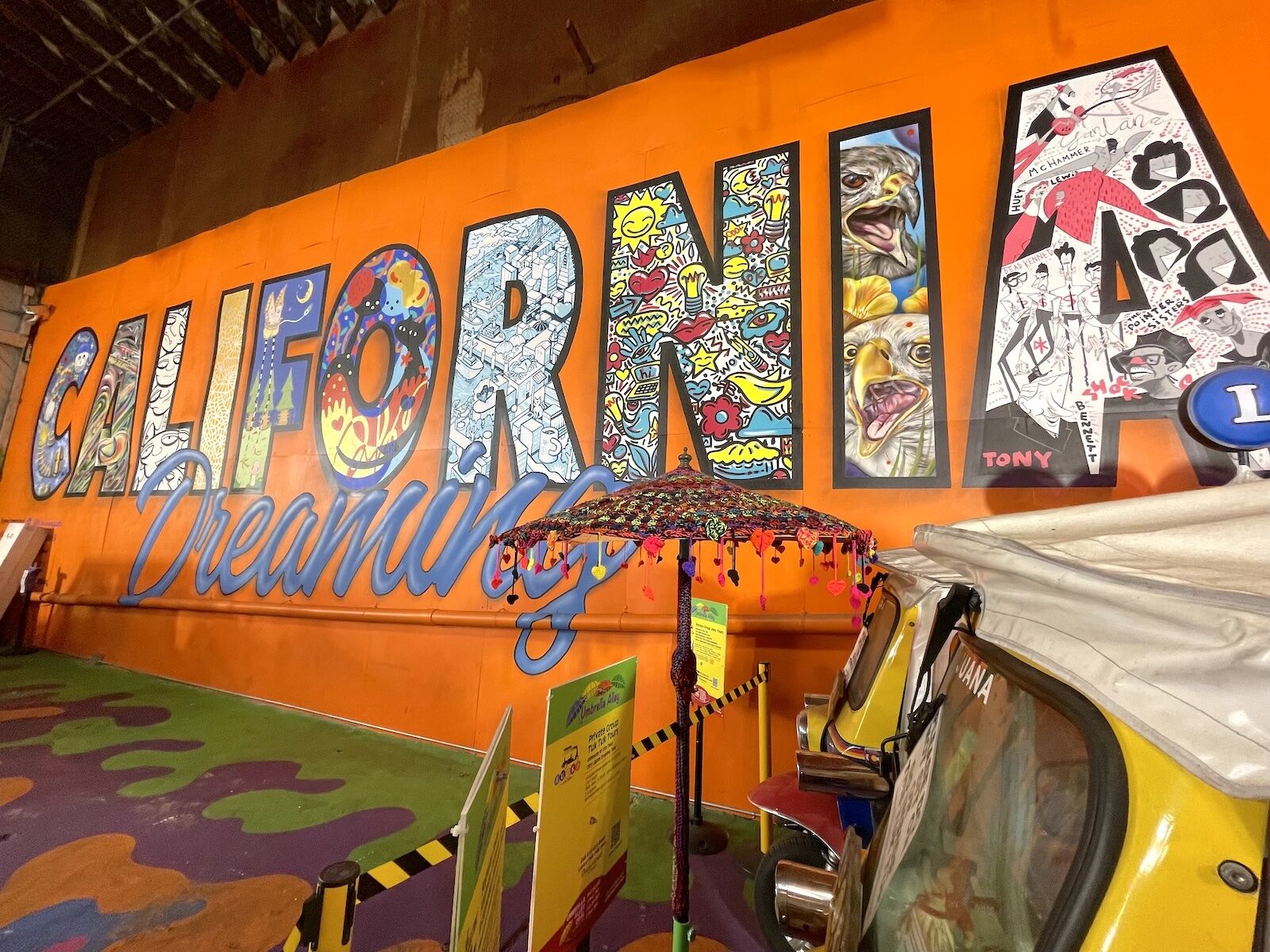 Twelve muralists came together to create this massive mural on the back wall of the covered section of Umbrella Alley. Each letter in the word California was painted by a different artist. 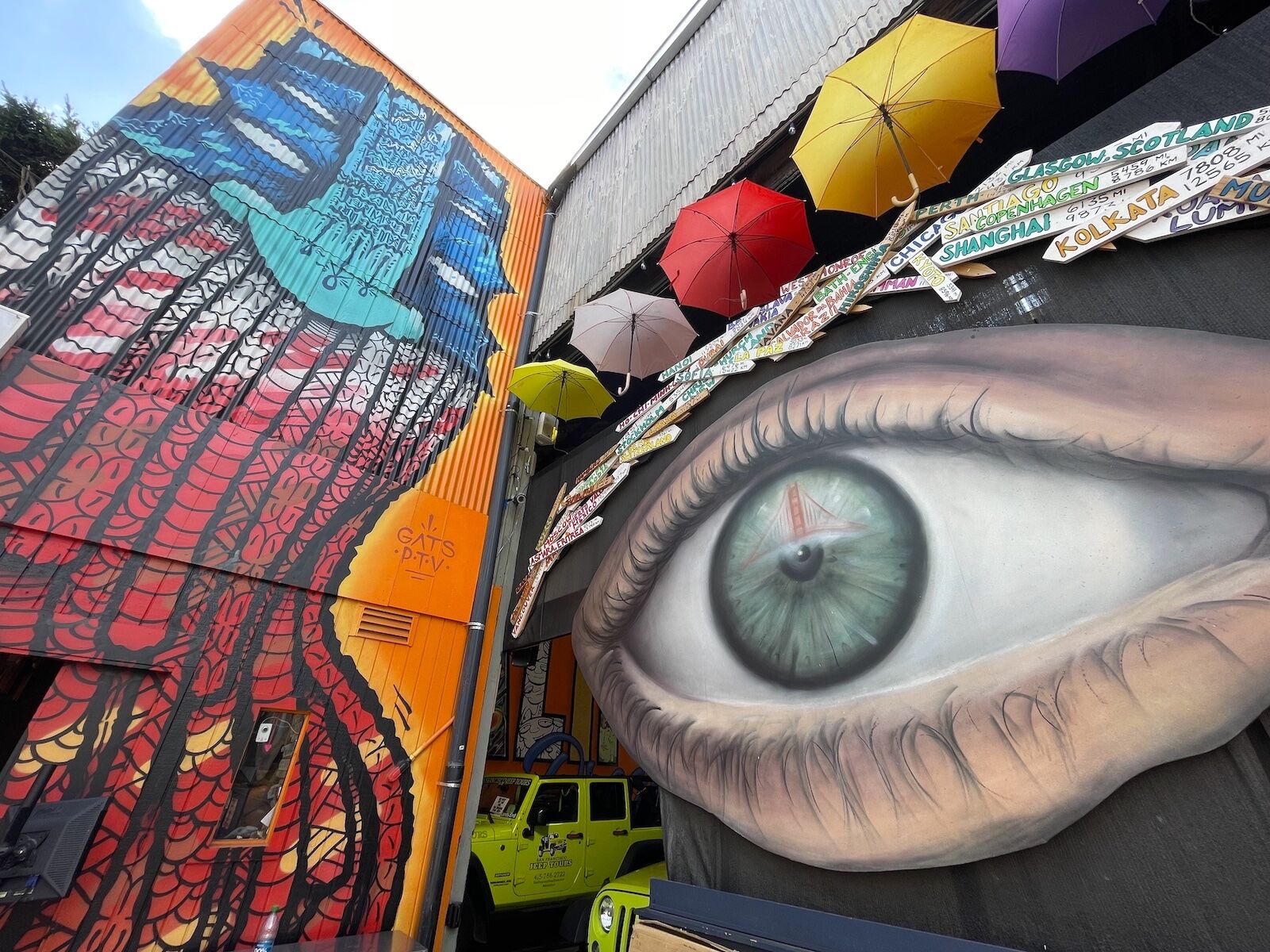 Oakland-based artist GATS (“graffiti against the system”) is behind this mask mural. In fact, it’s their signature design. Different versions of the all-seeing bearded figure appear all over the Bay Area, while other works by GATS have popped up everywhere from Palestine to the Philippines.

Where to eat near Umbrella Alley San Francisco 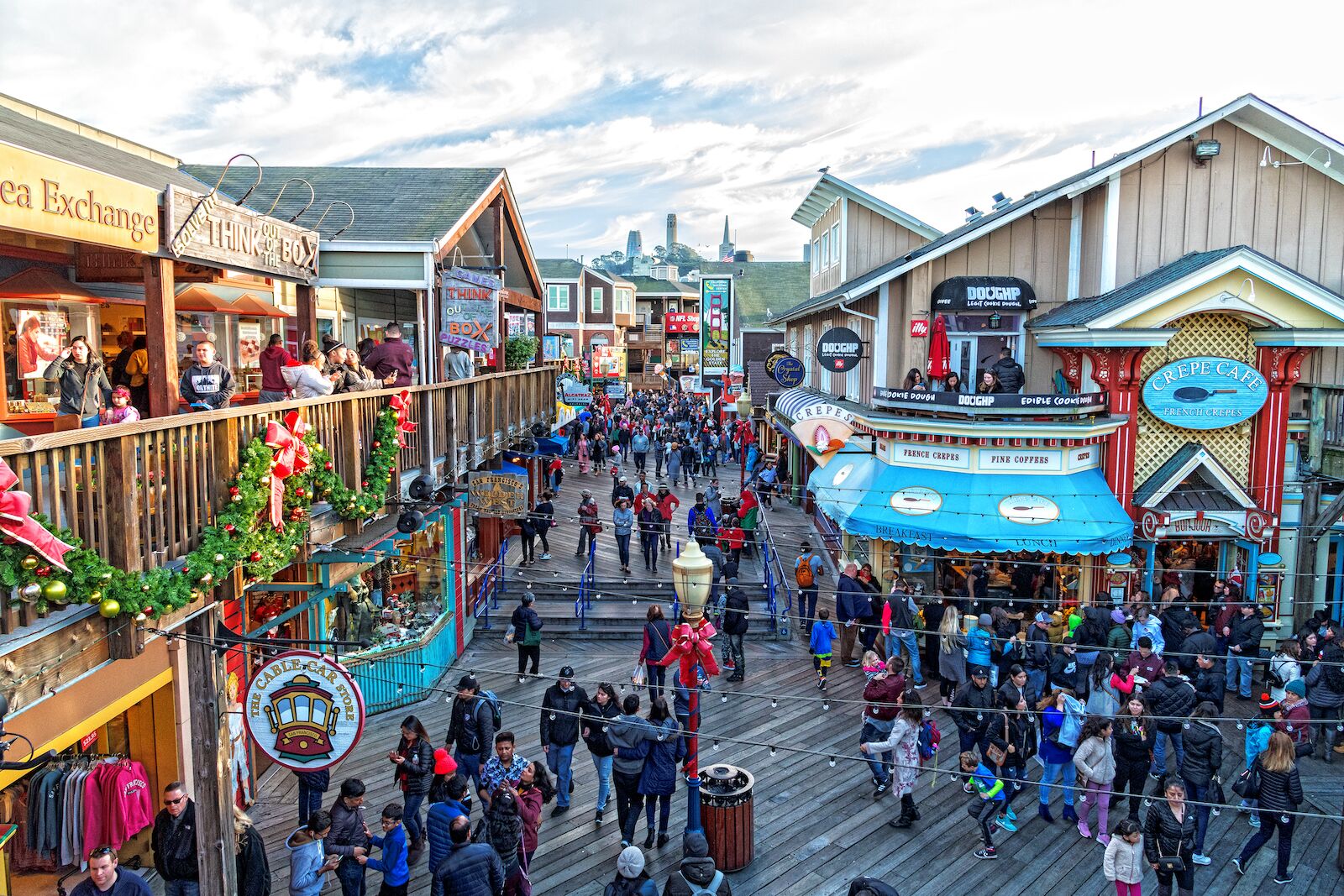 Biscoff Coffee Corner: If you’re among the travelers who obsess over the Biscoff cookies that some American airlines serve during flights, you’re not going to want to leave Fisherman’s Wharf without stopping at this cafe at Pier 39. Every coffee drink comes with a complimentary Biscoff cookie — imported straight from Belgium.

Boudin at the Wharf: Boudin Bakery is touted as San Francisco’s oldest operating business. It’s also credited with originating San Francisco’s sourdough habit. The bakery has been churning out sourdough loaves since 1849 and still incorporates a piece of the original starter into every loaf made today. Part market, part cafe, part espresso bar, and part full-service restaurant, Boudin at the Wharf is the brand’s flagship store.

Buena Vista Cafe: Legend has it that the former owner of Buena Vista Cafe was responsible for bringing Irish coffee to the United States in 1952. The cafe’s history can be traced back even further to 1916 when the first floor of the building, then a boardinghouse, was turned into a saloon called The Buena Vista. These days, you can stop by the cafe for breakfast, lunch dinner, and of course drinks.

Ghiradelli: Walk to the end of Beach Street toward Larkin from Umbrella Alley and you’ll hit Ghiradelli Square, a local landmark that’s named for the chocolate company. There, you’ll find three different Ghiradelli storefronts — the original ice cream and chocolate shop, the chocolate experience, and an on-the-go shop — as well as a handful of unrelated shops and restaurants.

Where: Corner of Beach Street and Larkin Street

Gary Danko: Lo and behold, one of the least expensive Michelin-starred restaurants in California is just a block away from Umbrella Alley. Gary Dank has been operating in Fisherman’s Wharf for more than 20 years and has been a mainstay of San Francisco’s fine dining scene every since.

In-N-Out: There’s not much to say about In-N-Out that hasn’t already been said, nor about California’s obsession with the fast food joint. But we’d be remiss not to mention the fact that one of the most convenient In-N-Out locations in San Francisco is located in Fisherman’s Wharf.

Scoma’s Restaurant: Seafood restaurants are a dime a dozen in Fisherman’s Wharf, but Scoma’s stands out among the average tourist trap crab shack. Choose between a sit-down meal at the waterfront restaurant or a to-go option from the marketplace — either way, order something with Dungeness crab in true San Francisco fashion.