Rome is famous for its many awe-inspiring churches, but the sheer number of them (about 900) can make it difficult to decide exactly which ones to visit once in the city. Once you’ve battled the crowds and made your obligatory visits to Saint Peter’s Basilica and the Sistine Chapel, consider visiting some of the underrated churches listed below for a more unique, but just as artistically and architecturally beautiful, trip to Rome. 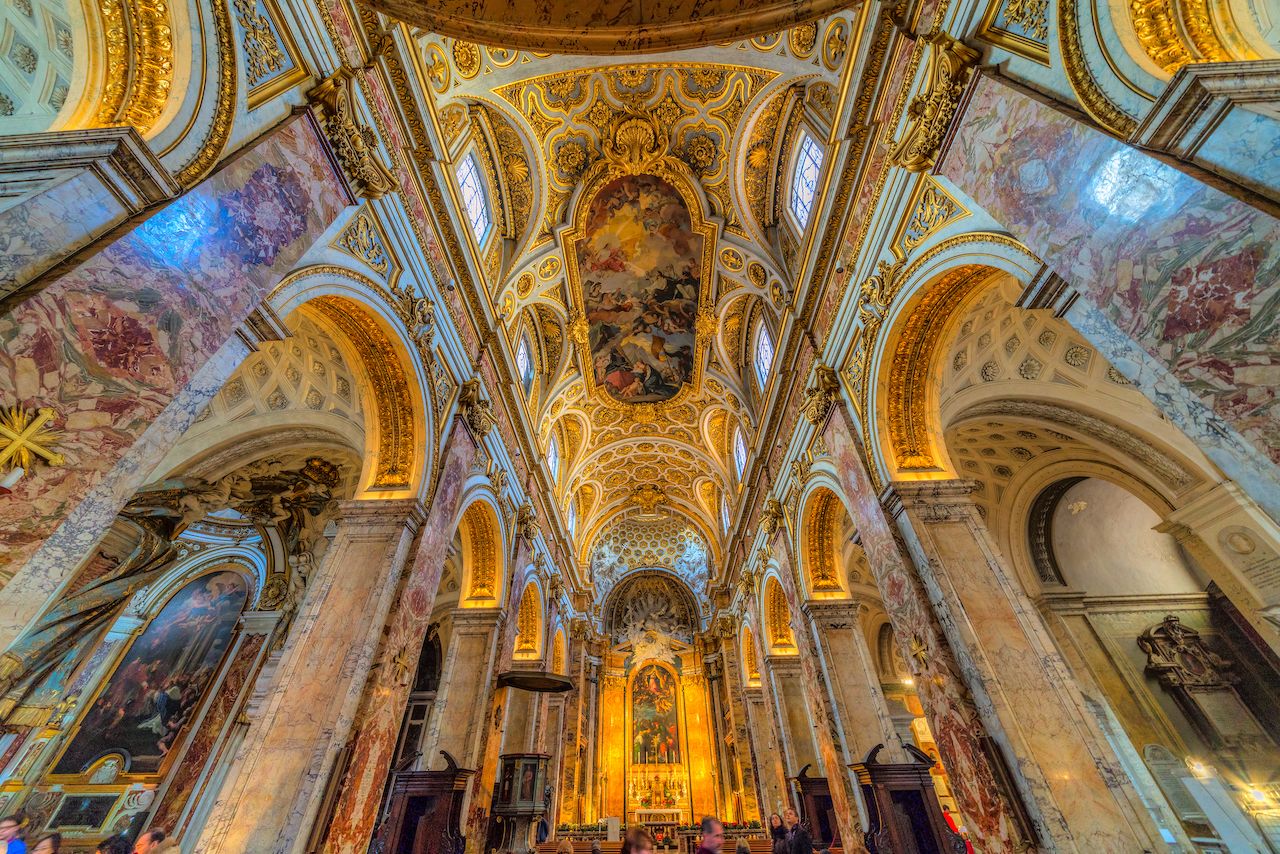 Less than 1,000 feet from the Pantheon, San Luigi dei Francesi is both the seat of the Parisian cardinal in Rome and the nucleus of the city’s French community. You can reach it by walking north in the Piazza della Rotonda, then taking a left on Via Giustiniani (which turns into Via Salvatore). San Luigi dei Francesi is a little-known spot to see three Caravaggio masterpieces in its Contarelli Chapel. 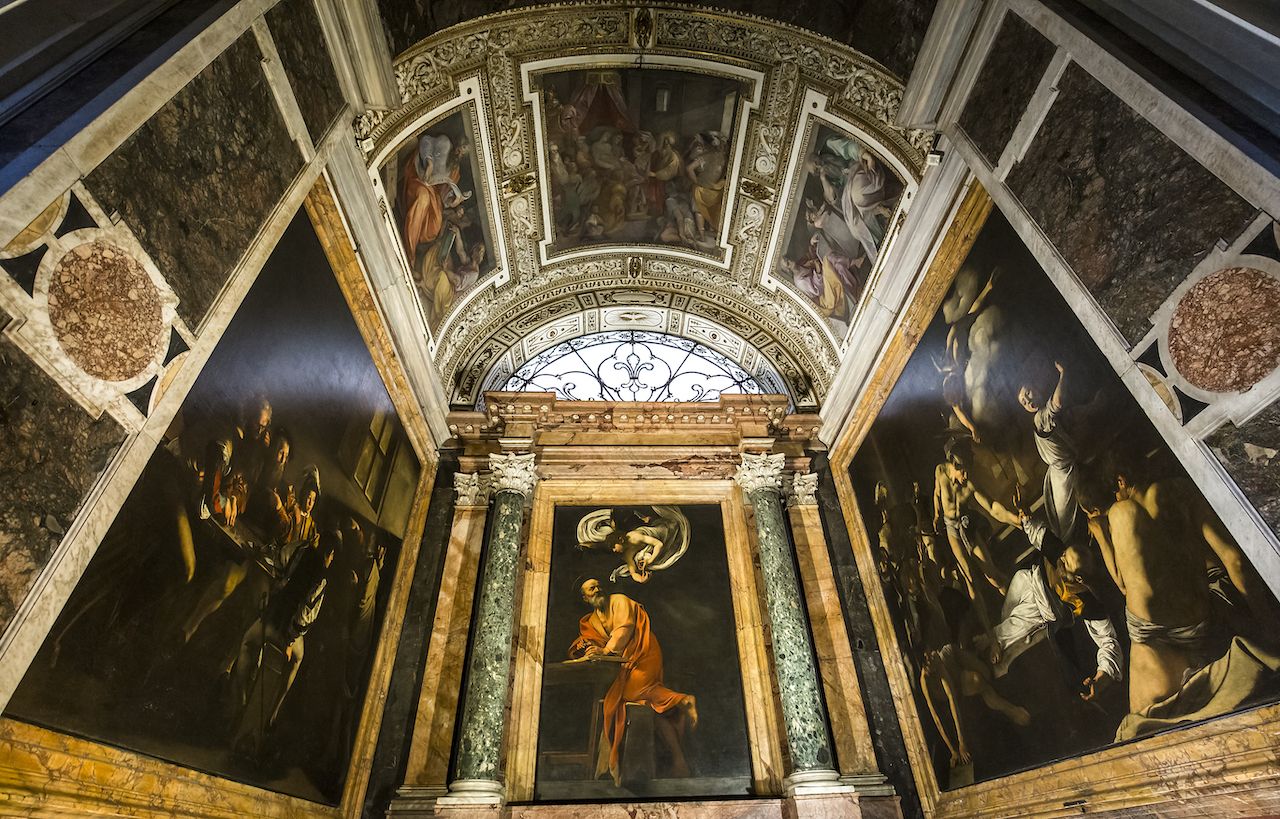 Caravaggio was still an artistic apprentice when he received the commission for the Contarelli Chapel. It was these three paintings — The Calling of Saint Matthew, The Inspiration of Saint Matthew, and The Martyrdom of Saint Matthew — that propelled him into stardom for the rest of his short life. They all contain the artist’s signature harrowing drama between darkness and light.

In addition to the Caravaggio paintings, you will find San Luigi to be a beautiful example of Renaissance architecture with its vaulted ceilings and gleaming marble columns. There is a particularly spectacular facade above the central altar, with rosettes, gold enameling, and angelic figures. 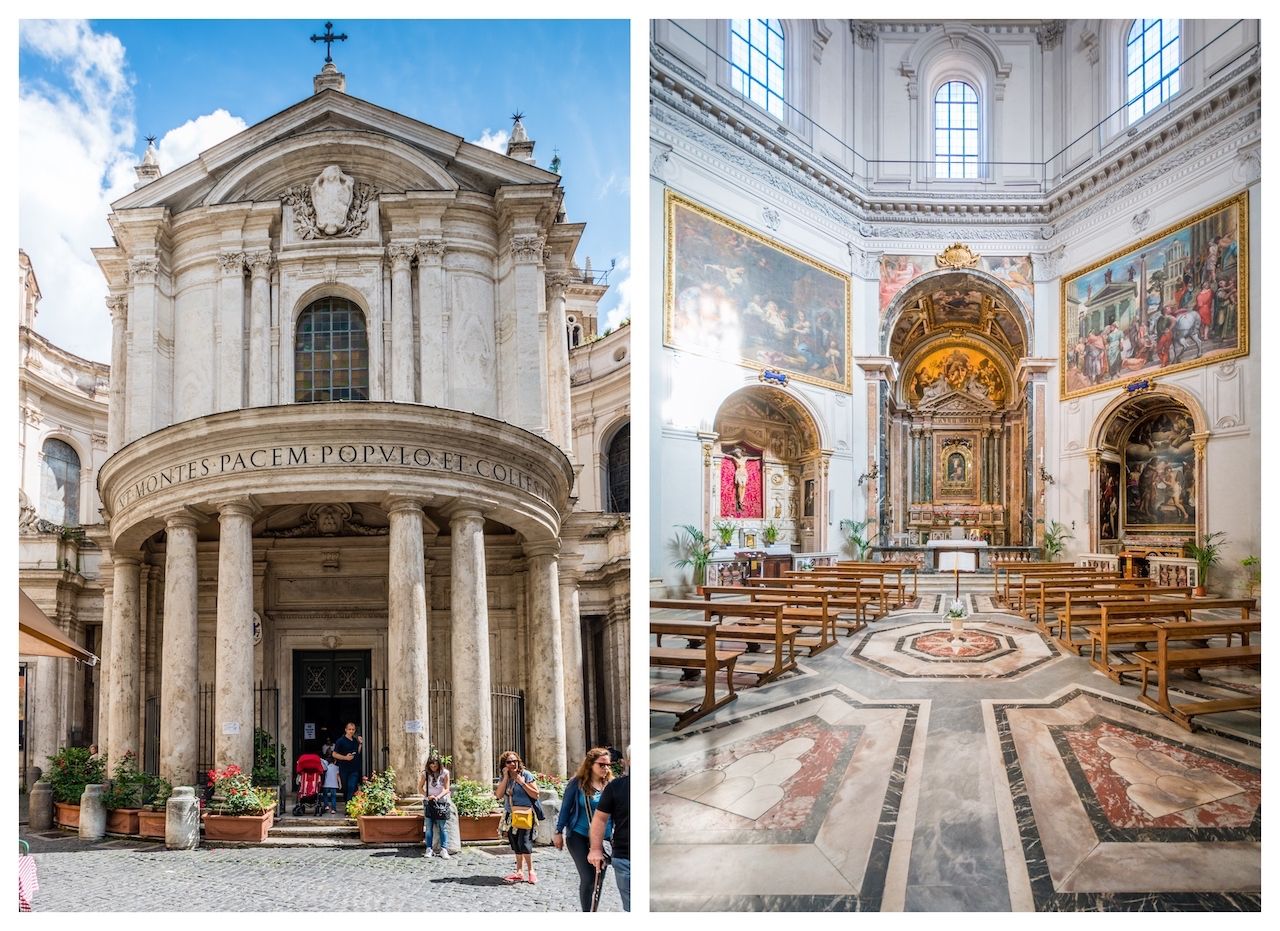 Santa Maria della Pace is both an architectural and artistic masterpiece that lies fewer than 200 feet from super touristy Piazza Navona. Make your way there by exiting Piazza Navona on Via dei Lorenesi, continuing onto Vicolo della Pace, and veering left on Via della Pace.

This church’s spectacular Baroque facade was constructed between 1556 and 1557. The church itself is connected to the Chiostro del Bramante, or Bramante Cloister, which was built between 1500 and 1504. This was the first work of legendary architect Donato Bramante in Rome. Bramante is credited with introducing the High Renaissance architectural style to Rome, and he created the preliminary designs for Saint Peter’s Basilica.

Inside the church on the right-hand wall, is a fresco painted by Renaissance master Raphael. This fresco, titled Sibyls, is largely inspired by the soft style of Michelangelo’s Sistine Chapel. In fact, Michelangelo painted five Sibyls, or prophetesses, throughout the ceiling of his Sistine Chapel. Painted around 1514, Raphael’s Sibyls depicts four women receiving guidance from angels.

Santa Maria della Pace is free, but the adjacent Chiostro del Bramante is now an art museum that charges 11 euros (approximately $12.30) for entry. 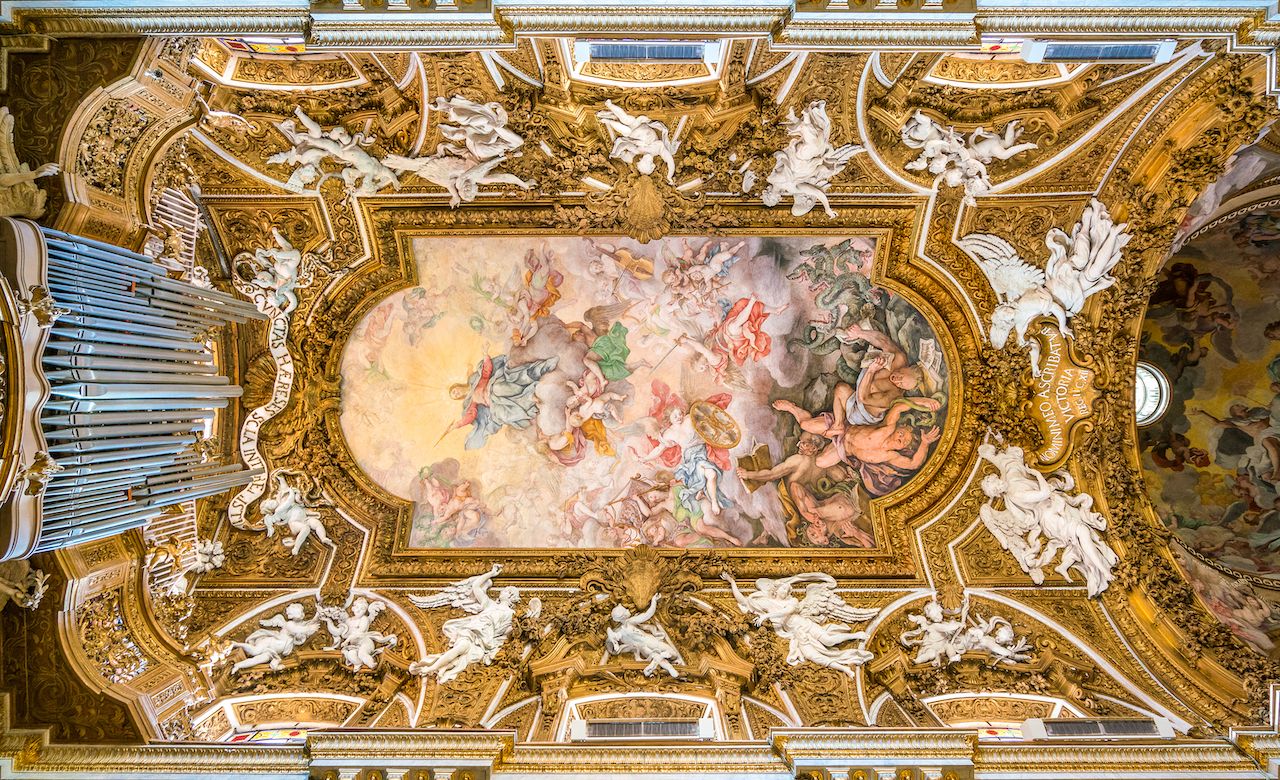 Santa Maria della Vittoria, or Our Lady of Victory, is a 17th-century basilica. It was built to commemorate Emperor Ferdinand II’s victory at the Battle of White Mountain, which was a part of the Thirty Years’ War fought between Catholics and Protestants.

You can reach Santa Maria della Vittoria by exiting the Repubblica metro stop and walking about 900 feet northwest on Via Vittorio Emanuele Orlando. This may not be the most charming area in Rome (Termini station and all its scuzziness is in close proximity), but the church is an oasis of artistic wonder. 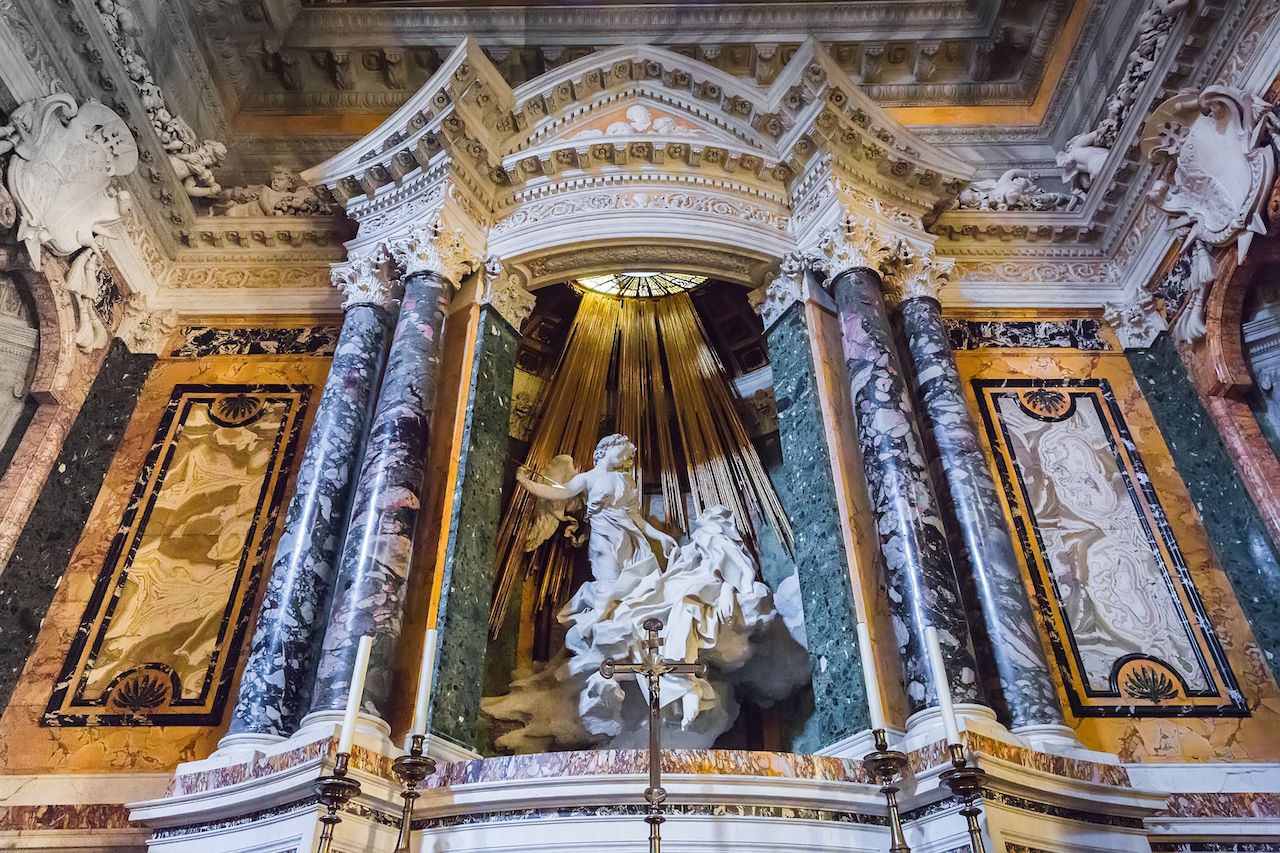 Santa Maria della Vittoria is home to the Cornaro Chapel, which contains the Ecstasy of Saint Teresa by Bernini. Bernini is the same sculptor who created the Fontana dei Quattro Fiumi in the center of Piazza Navona. In Santa Maria della Vittoria, you’ll have a more intimate experience with Bernini’s work and understand why he is lauded as the supreme sculptor of the Baroque era. The expressions of angel and saint, the intricate ruffles in Saint Teresa’s robe, and the sensuous poses seem almost too real to be crafted out of stone. 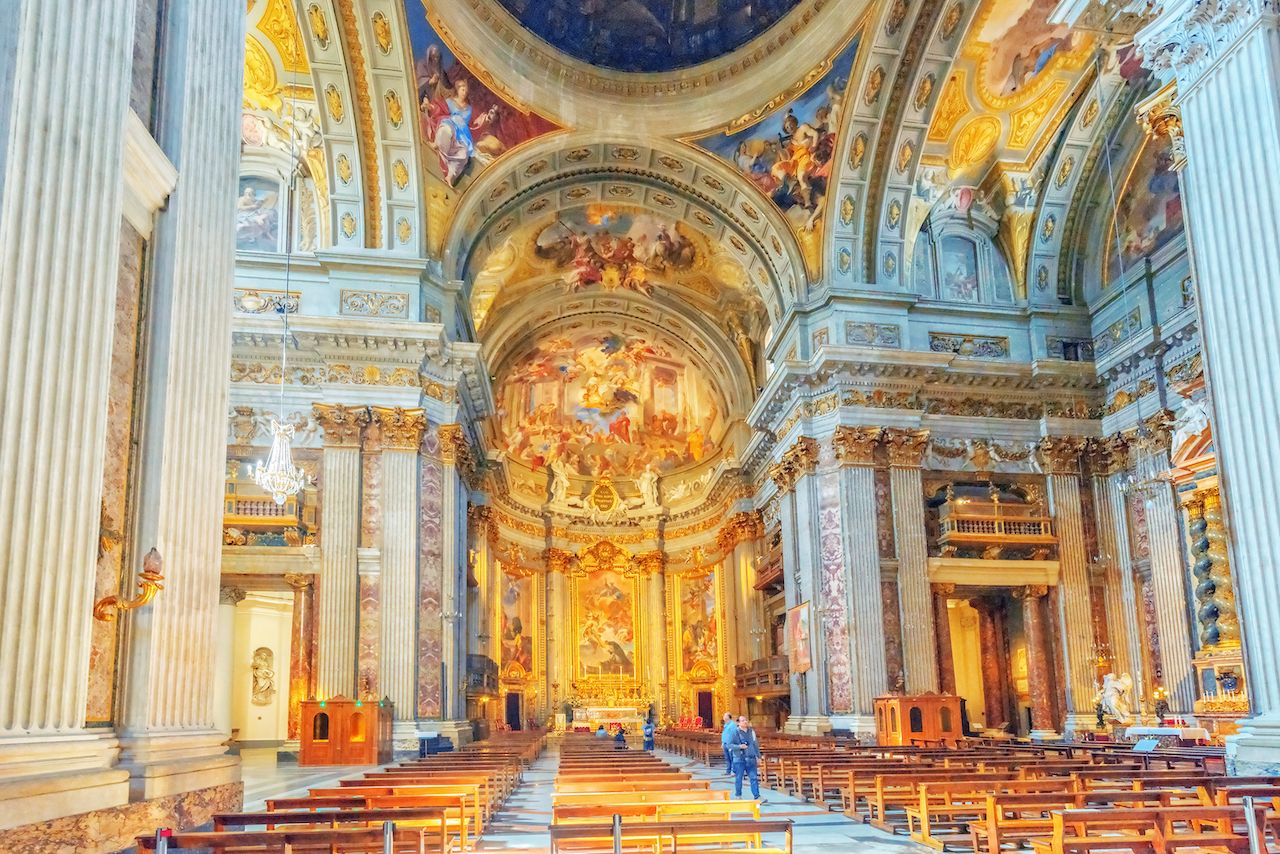 Chiesa di Sant’Ignazio is fewer than 900 feet east of the Pantheon. Exit the Piazza della Rotonda onto Via Seminario and then take a right into Piazza di San Macuto. You’ll find the church entrance on your right. Sant’Ignazio is affiliated with the Roman College founded by Saint Ignatius of Loyola in 1551 and was built to accommodate the expanding student body in the late 1600s. 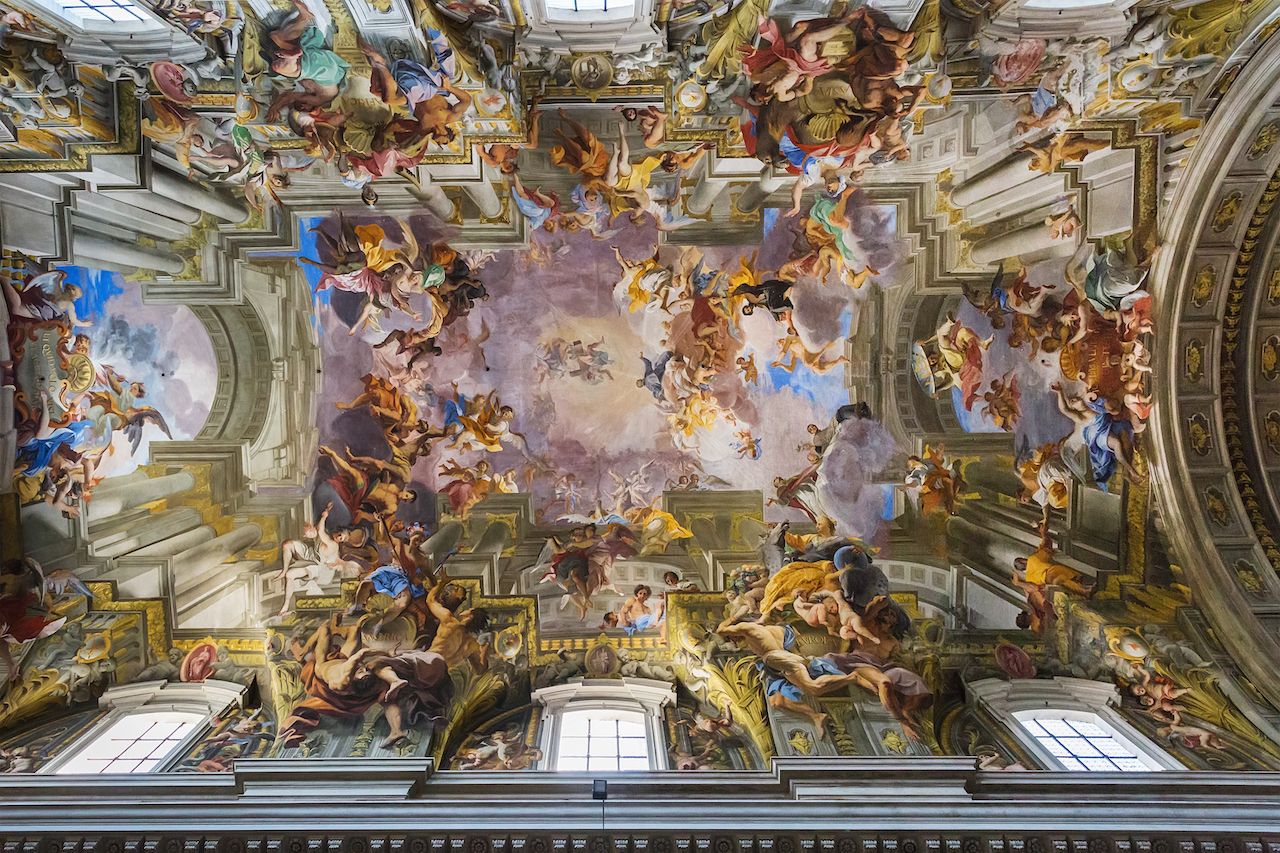 Much of the interior painting was completed by Jesuit artist Andrea Pozzo in the 1680s. His paintings are incredible examples of trompe-l’œil, or the illusion of creating depth that does not exist in physical space. The frescoes most demanding of double-takes are the fake dome and the vault. In the former piece, Pozzo creates the illusion of a dome within the church, although the ceiling is entirely flat. In the vault, the artist depicts the glory of Saint Ignatius of Loyola supported by angels. The figures appear to be ascending into the heavens amidst stretching Romanesque arches and columns. The entire church is a staggering, all-too-convincing, mind-bending display. 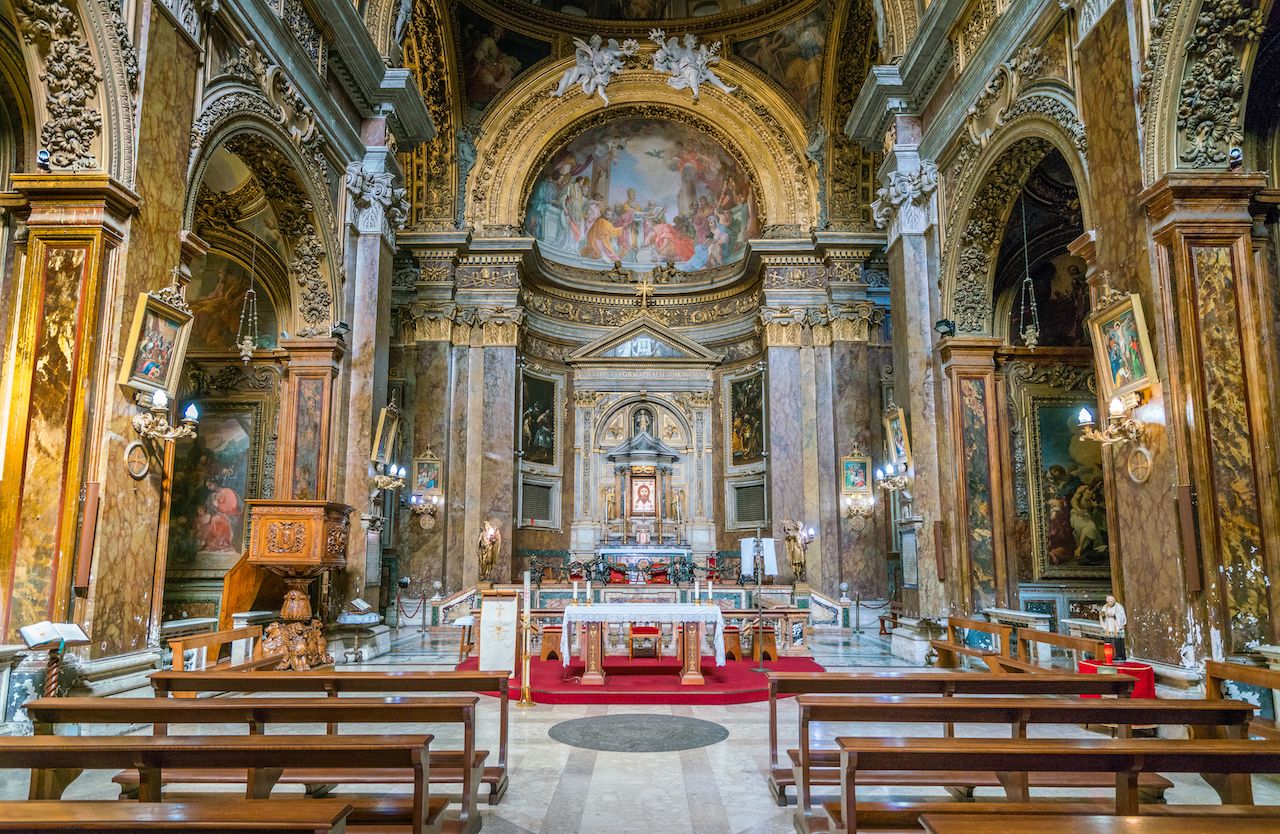 Immediately upon walking through the double doors, you will find yourself in an atrium that doubles as a lapidarium, or a room to display archeological pieces. All along the walls, there are odds and ends of ancient and medieval carved stone. This alone makes this church unique and worth visiting. 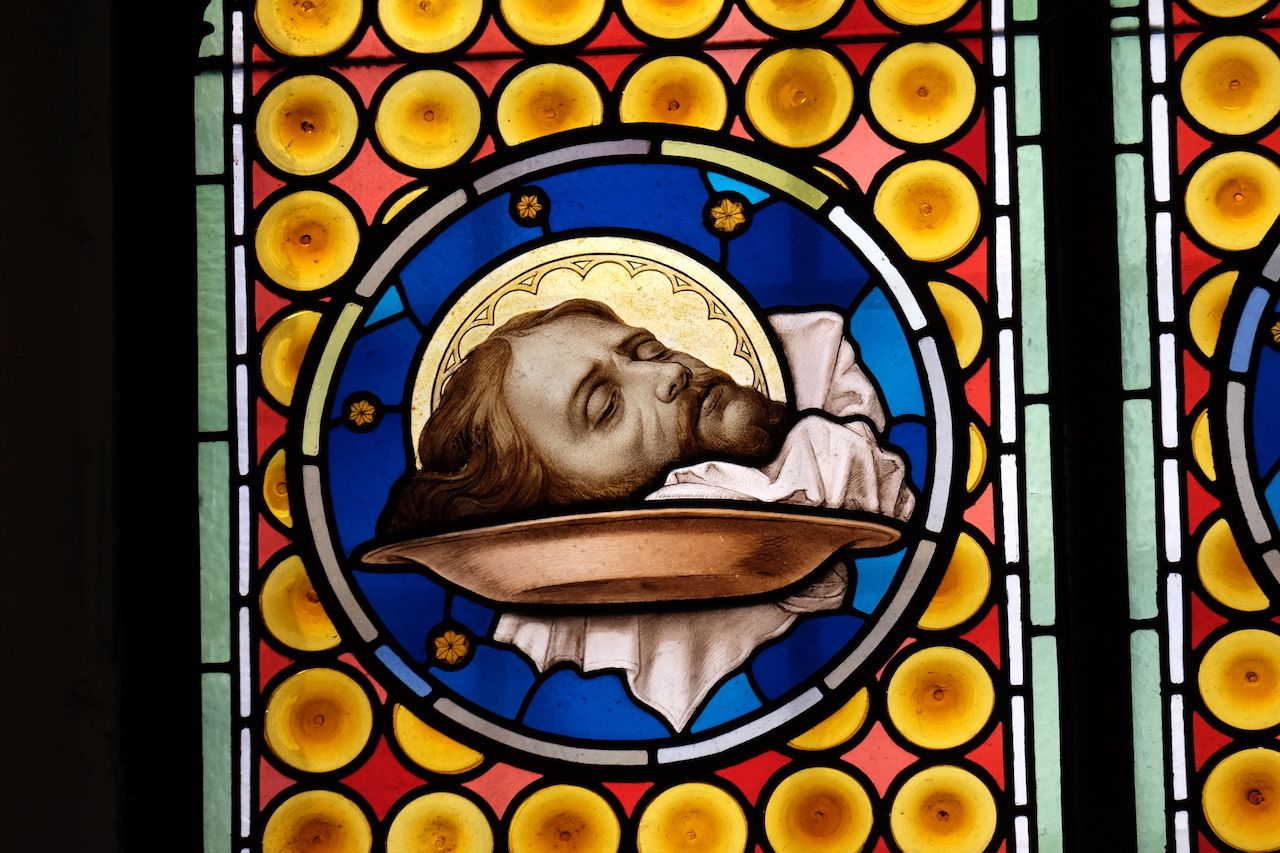 But there’s more. San Silvestro in Capite claims to contain the preserved head of Saint John the Baptist, which you can view by entering a small chapel in the rear of the church. There is also a stained glass depiction of Saint John’s head on a platter, in accordance with the biblical story of Salome’s gruesome request to King Herod. As a disclaimer, there are about three other churches in the world that also claim to contain the head of Saint John the Baptist, so you can be the judge of the head’s authenticity after you visit. 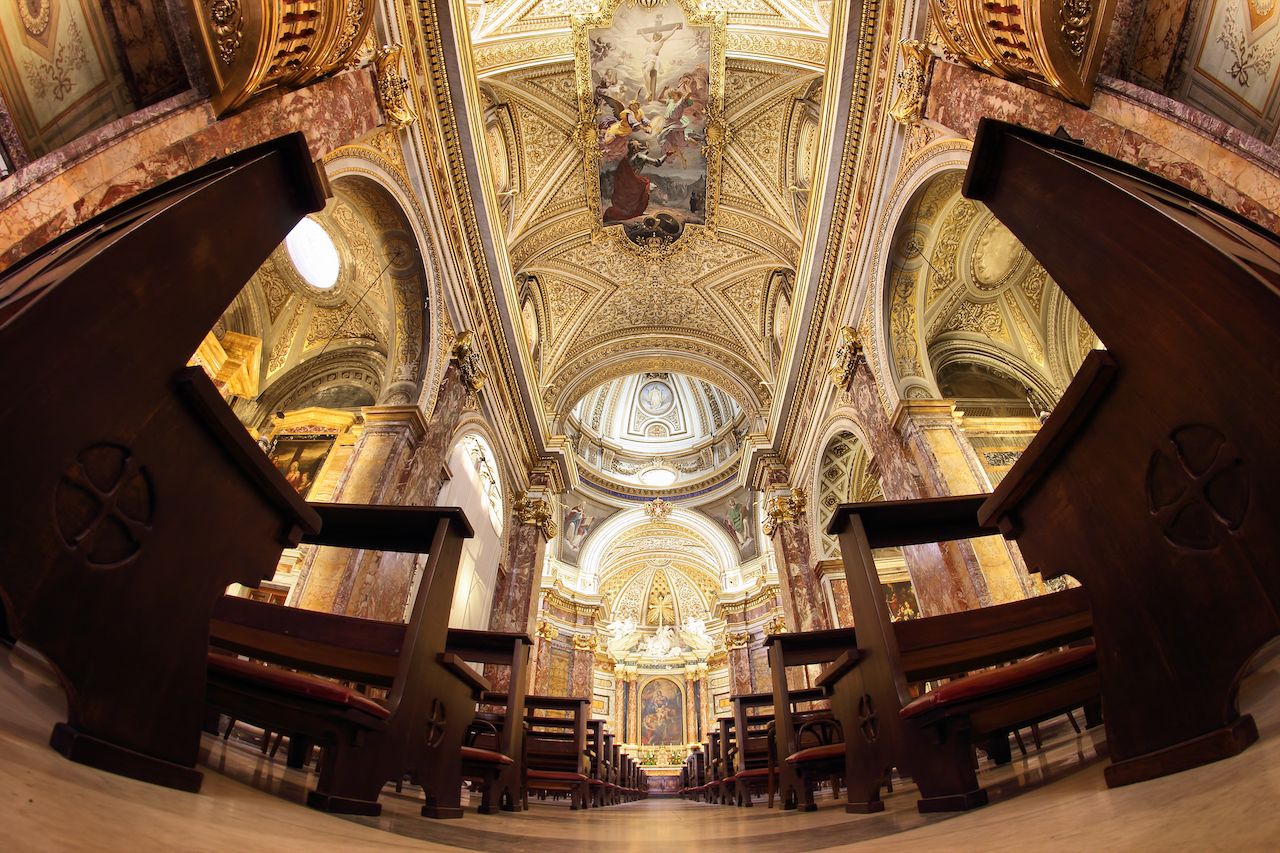 Sant’Antonio dei Portoghesi is located less than a quarter mile west of the Piazza di Ponte Umberto I. You can walk there from the piazza by exiting south into Via dei Soldati, veering left into Via dell’Orso, and continuing onto Via dei Portoghesi. Sant’Antonio serves as a hub for the Portuguese community in Rome. It was originally built in the seventeenth century, and its interior is a loud Baroque celebration. Its walls are decorated with patterns of different colored marble: pinks, blues, greys, and greens intersect to create an opulent display. 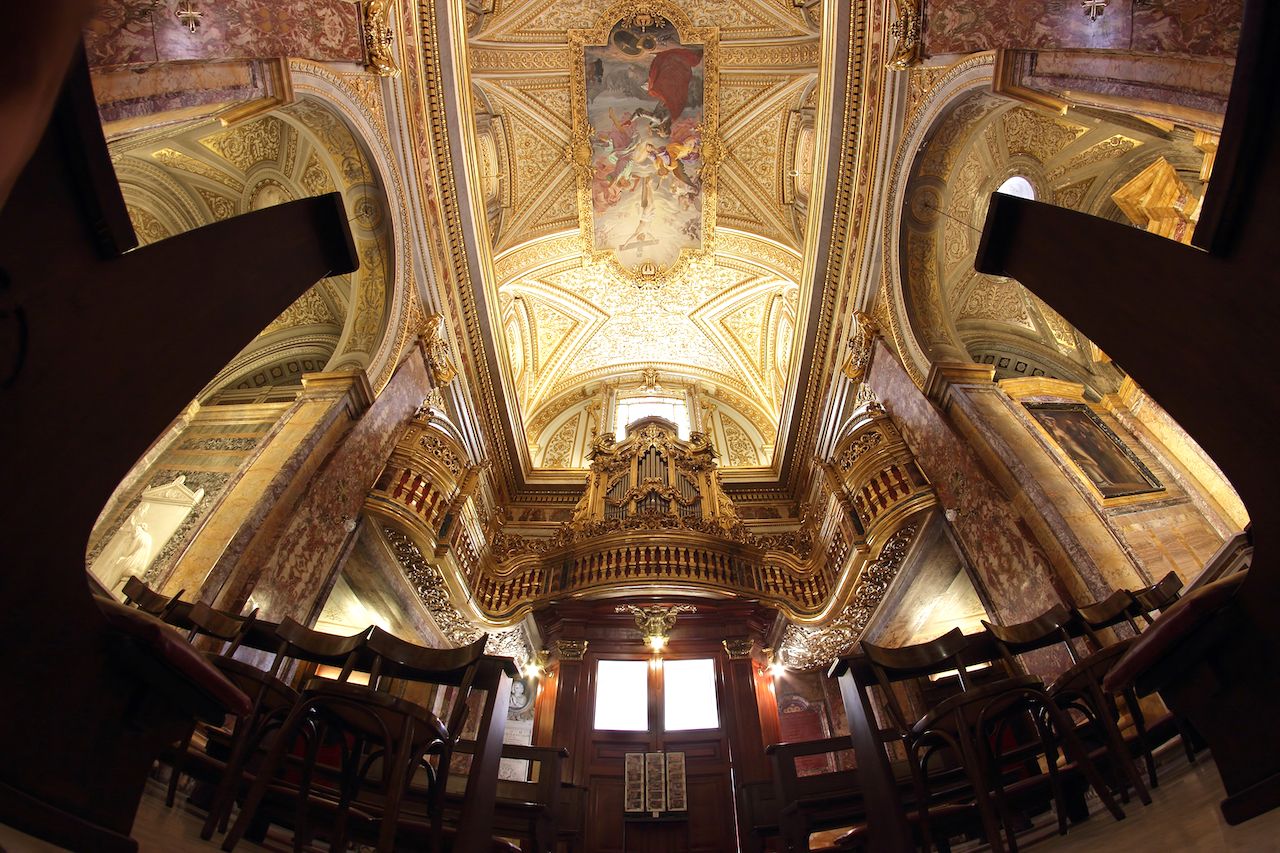 Sant’Antonio dei Portoghesi is perhaps best known for, and most proud of, its Great Symphonic Organ and its 3,150 pipes. The Great Symphonic Organ is an entirely unique instrument, and it sounds especially marvelous in the open, chambrous setting of Sant’Antonio dei Portoghesi. You can listen for yourself by attending mass, or by checking the website for special events. 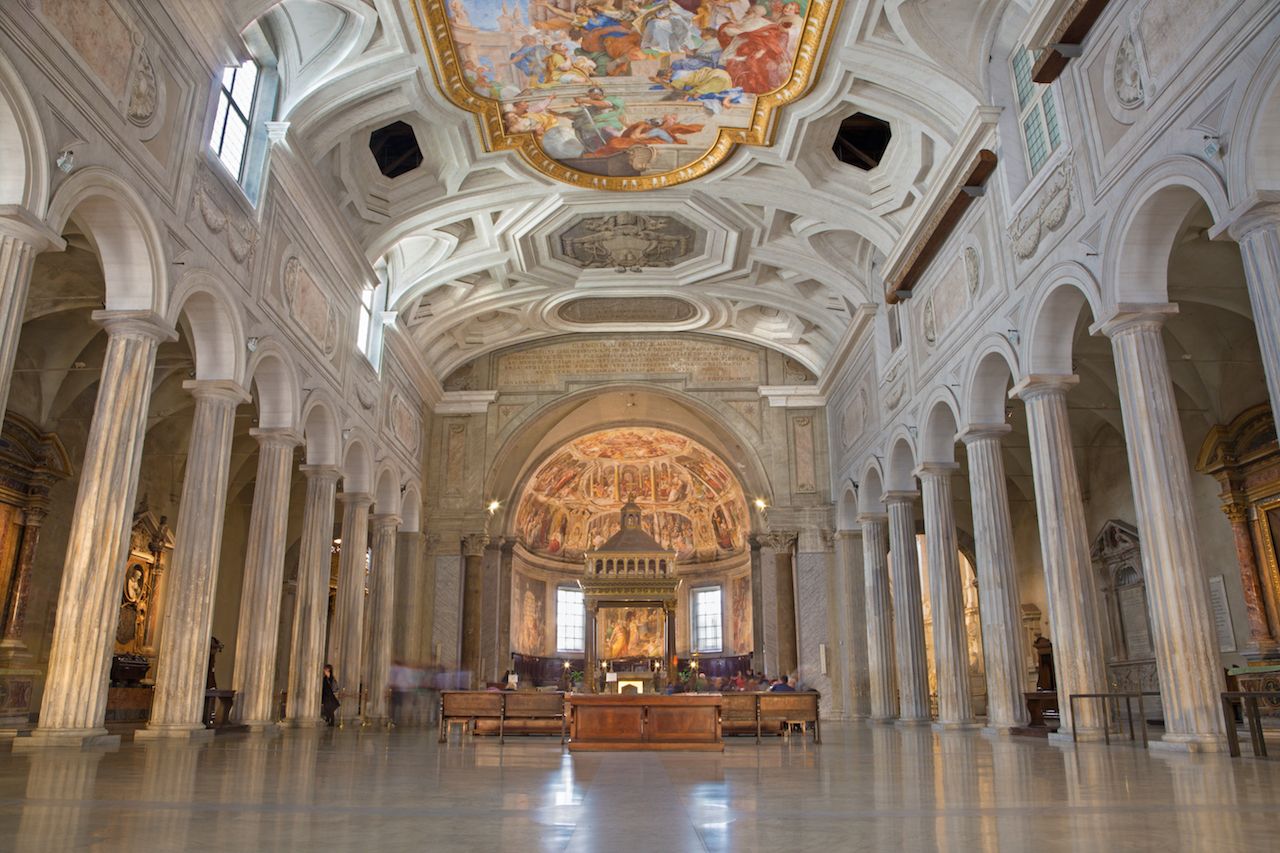 San Pietro in Vincoli lies just a third of a mile north of the Colosseum in the hip Monti district. You can get there by exiting the Piazza del Colosseo up a set of stairs towards the Giardinetto del Monte Oppio (the stairs are very close to the Colosseum metro exit). Walk straight onto Via del Fagutale, take a right onto Via della Polveriera, a left onto Via Eudossiana, and there you are.

The name San Pietro in Vincoli literally translates to “Saint Peter in Chains” because the church was initially built to house relics of the chains worn by Saint Peter during his imprisonment in Jerusalem. The bare bones of the church date back to the fifth century though, of course, much has been done over the centuries to amplify this holy home. 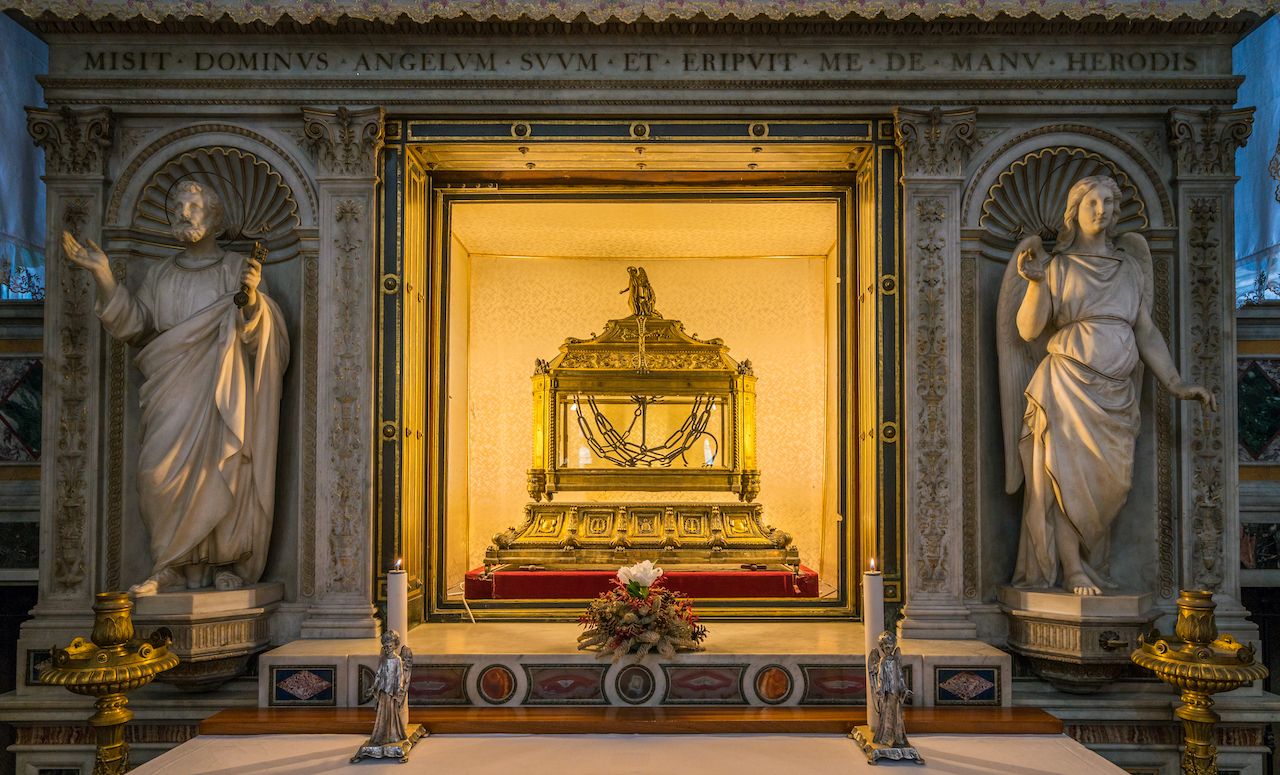 Aside from the chain relics, San Pietro in Vincoli is known as being one of the only churches in Rome to contain a sculpture by Michelangelo (the others being St. Peter’s and Santa Maria Sopra Minerva). Michelangelo’s massive sculpture of Moses, designed between 1505 and 1515, is a mausoleum that covers the tomb of Pope Julius II. 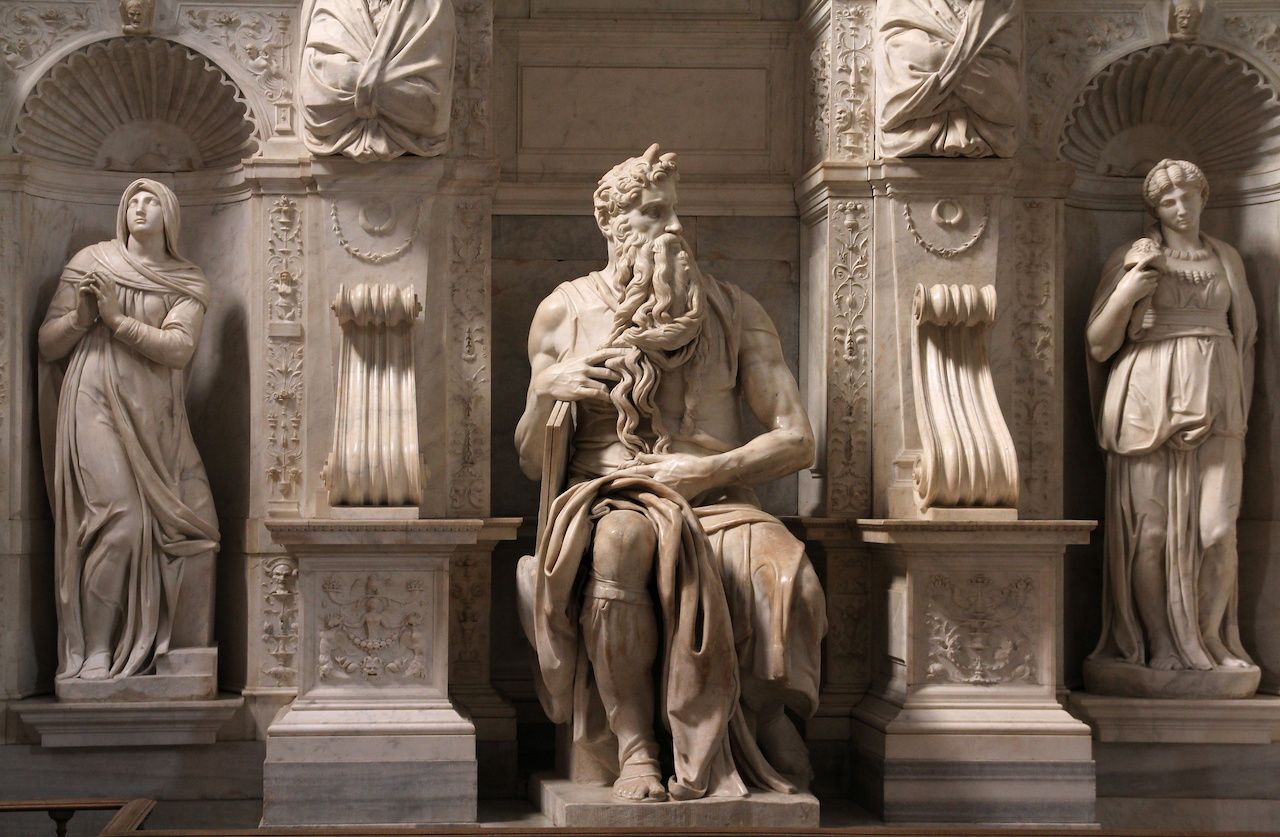 San Pietro in Vincoli is free to visit. However, the mausoleum (and thus Michelangelo’s Moses) is dimly lit until a visitor makes a donation to turn on the lights. The church is open every day from 8:00 AM to 12:30 PM and again from 3:30 PM to 6:00 PM.

Art + Architecture7 Amazing Russian Churches That Seem Right Out of a Fairytale
Tagged
Art + Architecture Religion Insider Guides Rome, Italy
What did you think of this story?
Meh
Good
Awesome