When you think about where can you ski, places like the Alps, Vermont, or the Rocky Mountains may come to mind. Maybe even Japan or New Zealand. But you might be surprised to learn that great skiing can also be found beyond those famous places. Going off the beaten path will not only get you great skiing, but oftentimes unique cultural experiences and budget-friendly amenities as well. Here are seven of the best ski resorts located in unexpected places to ski this season. 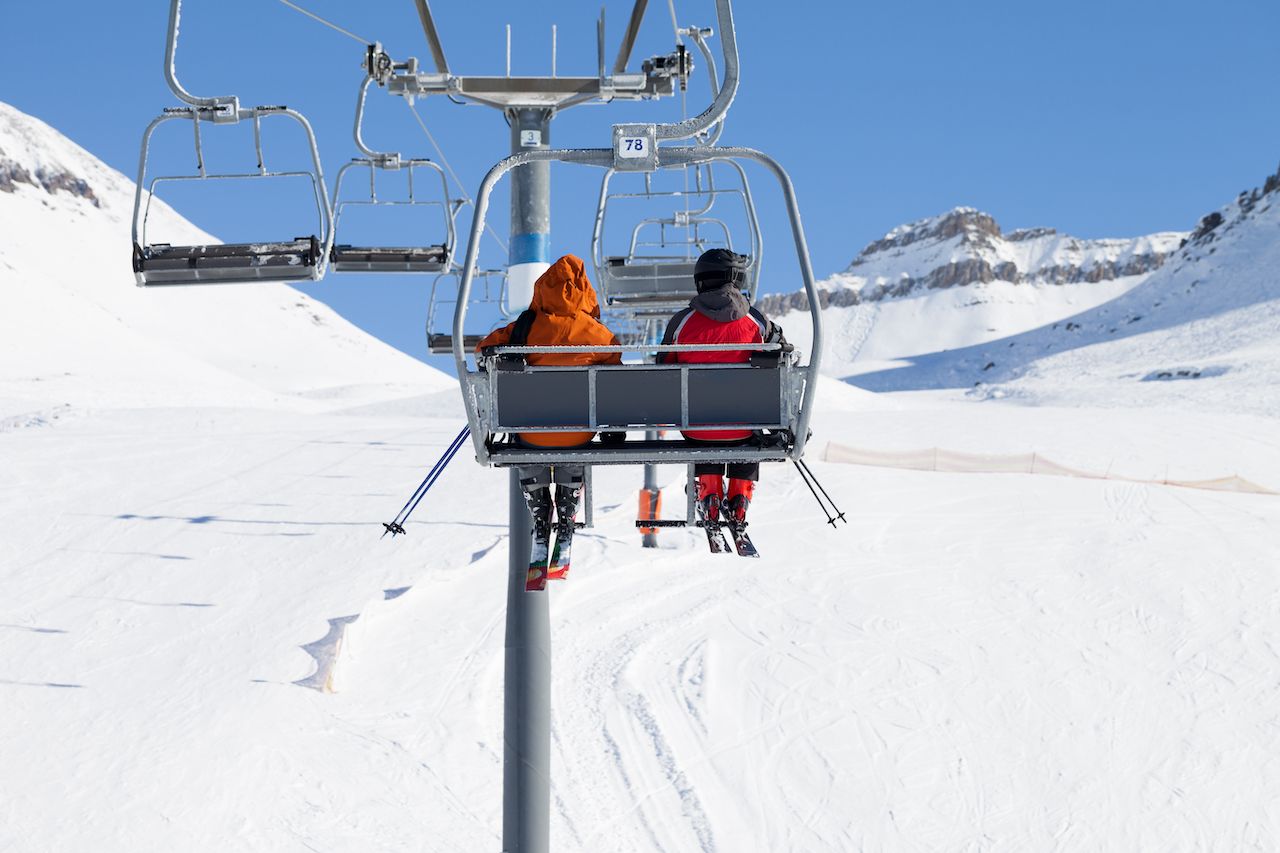 The Caucasus Mountains are towering, steep, and snow-covered, so naturally you can find some awesome skiing here. The most international and biggest resort in the state of Georgia is Gudauri Ski Resort.

Like the rest of the Caucasus, at Gudauri you’ll find dramatic alpine views and great terrain, and unlike in the Russian Caucasus resorts, at an amazing value. The town is prepared to accommodate English speakers, and you can find ski lessons with fluent English speakers. The mountain itself has everything from beginner slopes to rocky chutes. While Gudauri’s 16 lifts give you access a big enough area to keep you busy, there’s even more to be found in the backcountry.

Don’t expect to spend much. It’s 14 euros ($15.60) for a lift pass for a day, and a big meal in the village will usually run you about 5 euros, or less than $6. And the food is hearty Georgian food like khinkali (dumplings) or khachapuri (bread with cheese inside). 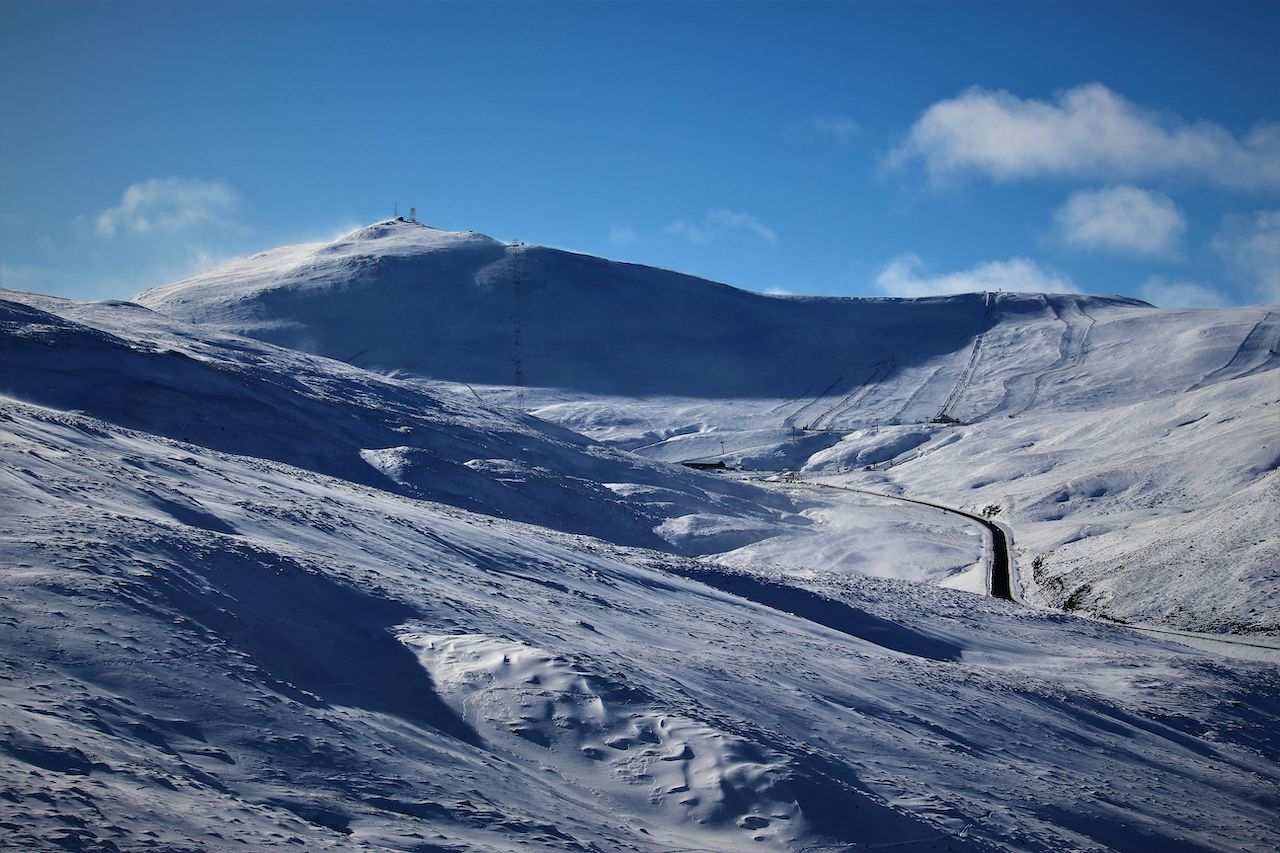 The Highlands in Scotland are celebrated by outdoor lovers for the rugged, green mountain landscape. But few people know that the famous green landscape also has a few skiable peaks covered in white in the winter months. The best place to take advantage of skiing in the British Isles is at Glenshee Ski Centre, the biggest ski area in Scotland.

Glenshee Ski Centre covers four mountains, with over 2,000 skiable acres and 25 miles of pistes with reliable snow-making. Glenshee is best for intermediates and beginners as it is flatter than other mountains on this list. It’s only two hours from Edinburgh by car, making it a doable day trip from the city. You can purchase a one-day adult pass for about $42.

At the mountain you’ll also find all the modern ski resort essentials including gear to rent and a ski school. You can have lunch or even afternoon tea on the mountain at the Cairnwell Café, one of the three places for food and drink at the resort. After skiing, you can find plenty of pubs for a pint or a whisky, as well as accommodations, in the nearby towns of Braeburn, Blairgowrie, and East Perthshire. 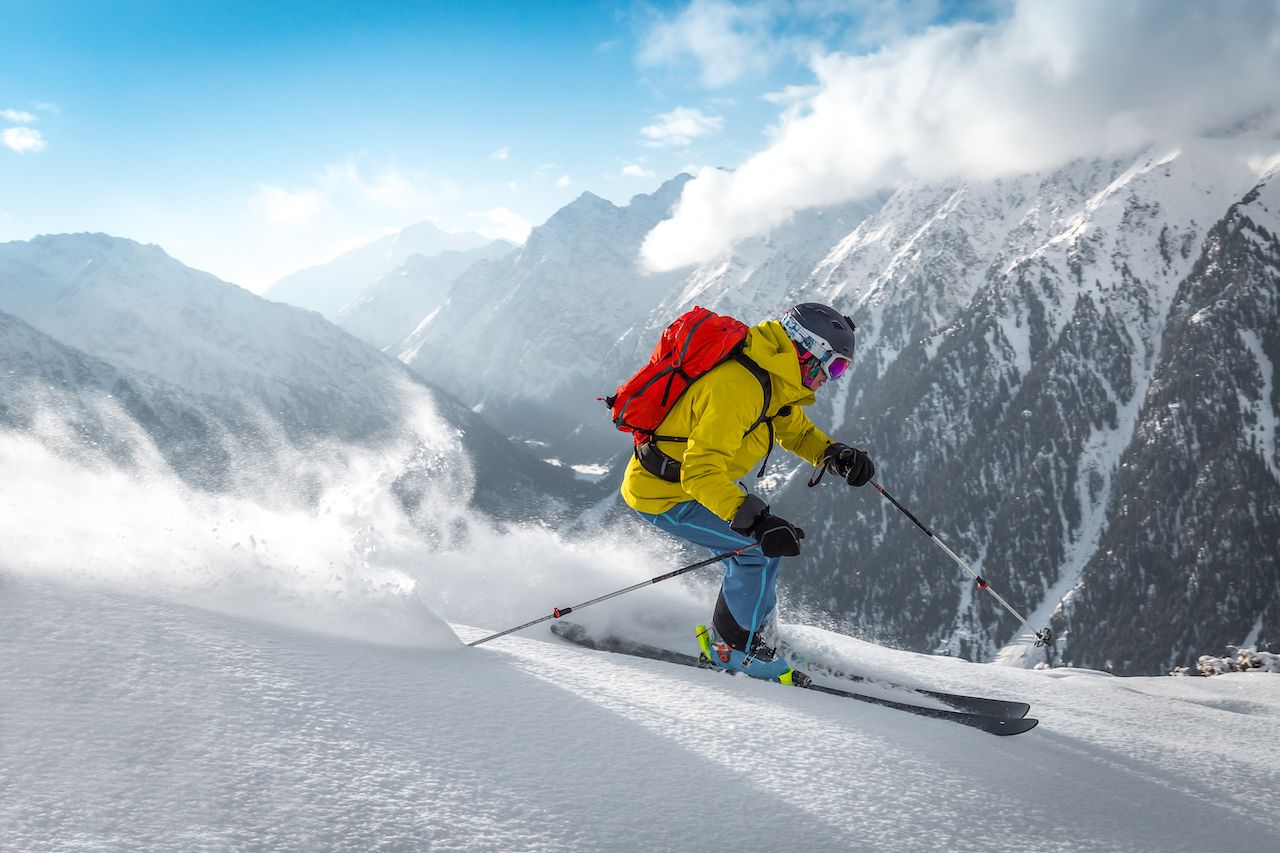 Located in the picturesque Tien Shan mountains with views of Issyk-Kul lake, Karakol Ski Base in Kyrgyzstan is in a stunning location. Much of the resort takes you through verdant pine forests, and fair weather skiers will appreciate the resort’s many sunny days. The dry conditions mean that powder is low in moisture and light; and you can find plenty of it off-piste and in the backcountry. Advanced skiers can also appreciate the amount of gladed (tree) skiing to be had. The resort’s triple and double chairlifts comprise the most modern lift system in the country.

You can find a few houses and small, no-frills hotels on the mountain, but for more accommodations and dining options stay in nearby Karakol town, just a 30-minute drive away. In town you can also find more English speakers, gear to rent, and cash machines. Note there are no ATMs on the mountain and they only accept cash. However, there are no cash machines at the base, so make sure you rent gear and cash in town before you go. At the mountain you’ll definitely feel like you’re in central Asia. The two restaurants serve typical Kyrgyz, Uighur, and Russian dishes.

For another way to take advantage of Tien Shan’s champagne powder, stay in yurt camps and ski tour nearby Karakol. Aksu Valley, Jyrgalan, and Ak-Tash all have winter yurt camps with cats and/or snowmobiles to take you to shredding through the mountains. Afterward, heat up in the cozy yurt camps, some equipped with hot springs and outdoor hot tubs. 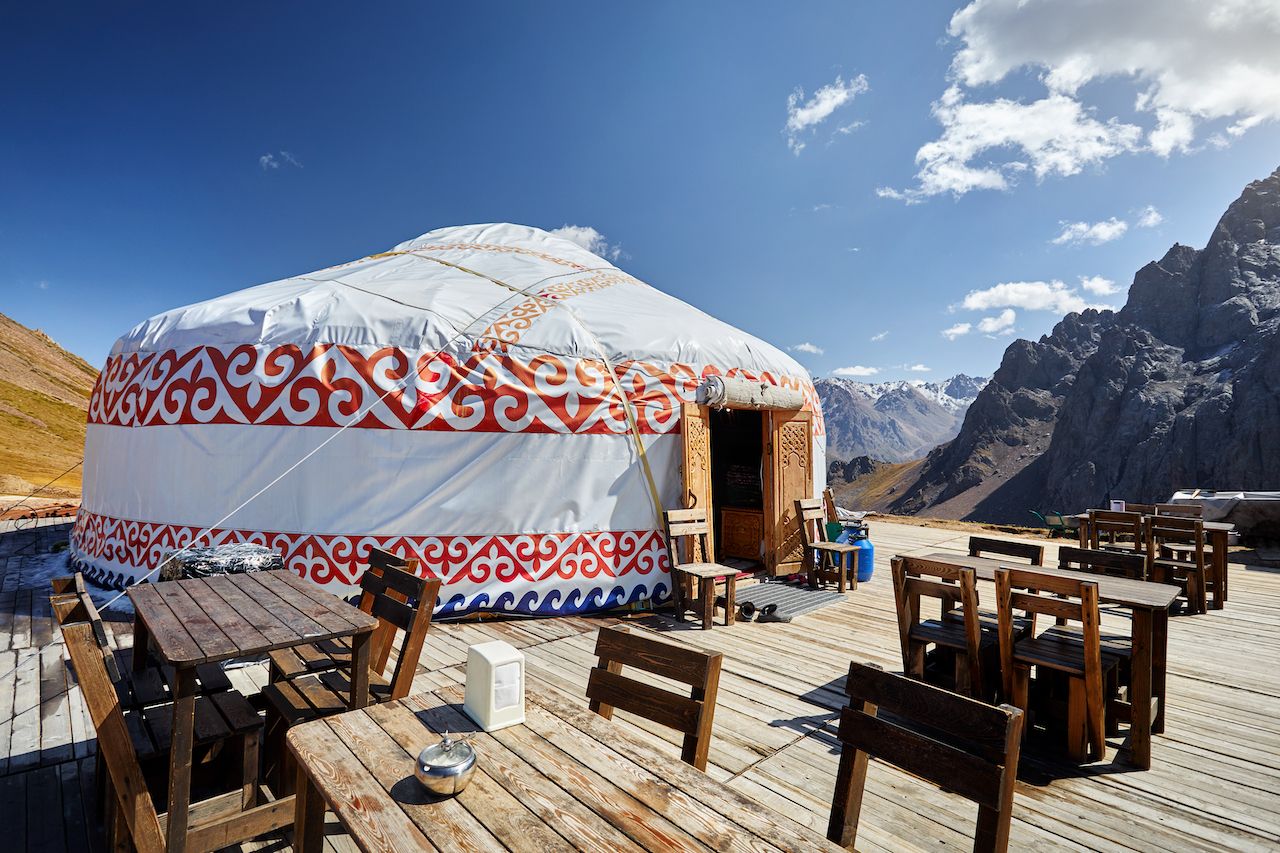 Shymbulak is the biggest and most modern ski resort in Central Asia. It’s located just 30 minutes outside of Almaty, Kazakhstan’s biggest city. Here you can also experience the glorious Tien Shan Mountains, as well as a surprisingly charming city in the same trip.

Shymbulak is relatively small, but it does have two hotels (a small, six-room “boutique” hotel and a larger one at the base), a number of restaurants, gear available to rent, and a ski school. You’ll find pistes for all levels, and it’s a good starting point to access the incredible backcountry. A lift pass costs about $20 for adults on weekends, and about $15 on weekends.

When you’re not skiing, there’s a lot to do, including breathtaking paragliding. Lasting 15 minutes in winter and 30 minutes in summer, paragliding sessions start at 10,500 feet and land at around 500 feet. You can also ice skate at Medeu, which is the highest ice skating rink of its size in the world.

After or before your ski trip, we recommend exploring Almaty. Here you can get a taste for Kazakhstan’s unique culture as you explore the museums, delicious restaurants, numerous parks, and Western-style coffee shops. 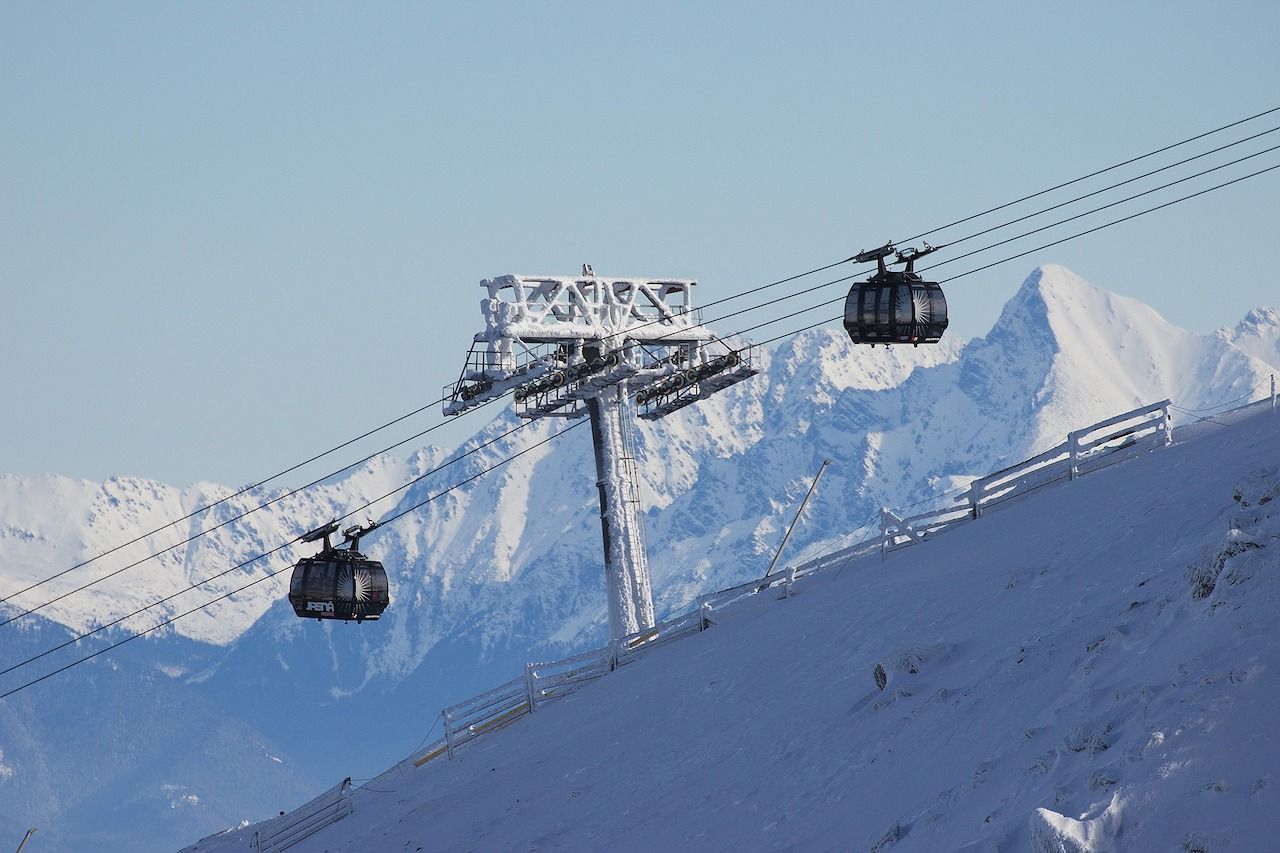 If you’re looking for value and some solid skiing, Jasná, Slovakia, is the mountain for you. The resort isn’t massive, but it does boast 28 lifts and 30 miles of pistes. Also, it’s about half the price of the resorts in the Alps and accessible by many low-cost flights. While you may pay over $50 for a lift pass on a December weekend, it’s much cheaper on weekdays and you’ll get discounts for multi-day passes. Also, you’ll pay less in lodging and food than at the Alpine resorts due west of here.

Just because it’s cheaper doesn’t mean it’s lacking in any way, though. Jasná has an updated lift system that accesses all kinds of skiing. At 6,500 feet, Jasná is at a lower elevation than the Alps so many of the pistes are cut through the woods. But if you like skiing above the treeline, Jasná does have a decently sized alpine area, and it’s also well-known for having great off-piste skiing.

It’s not as crowded as resorts in better-known European destinations, so powder runs don’t get skied out. That means you can often make fresh tracks for a few days after a snowfall, both in the off-piste in the alpine and in tree runs. Jasná is pretty steep so it best suits intermediate skiers and up. The village at the base doesn’t have a lot going on, but the nearby town of Liptovsky Mikulas has a happening nightlife and other activities like bowling, go-karting, ice hockey matches, and Tatralandia Aquapark. 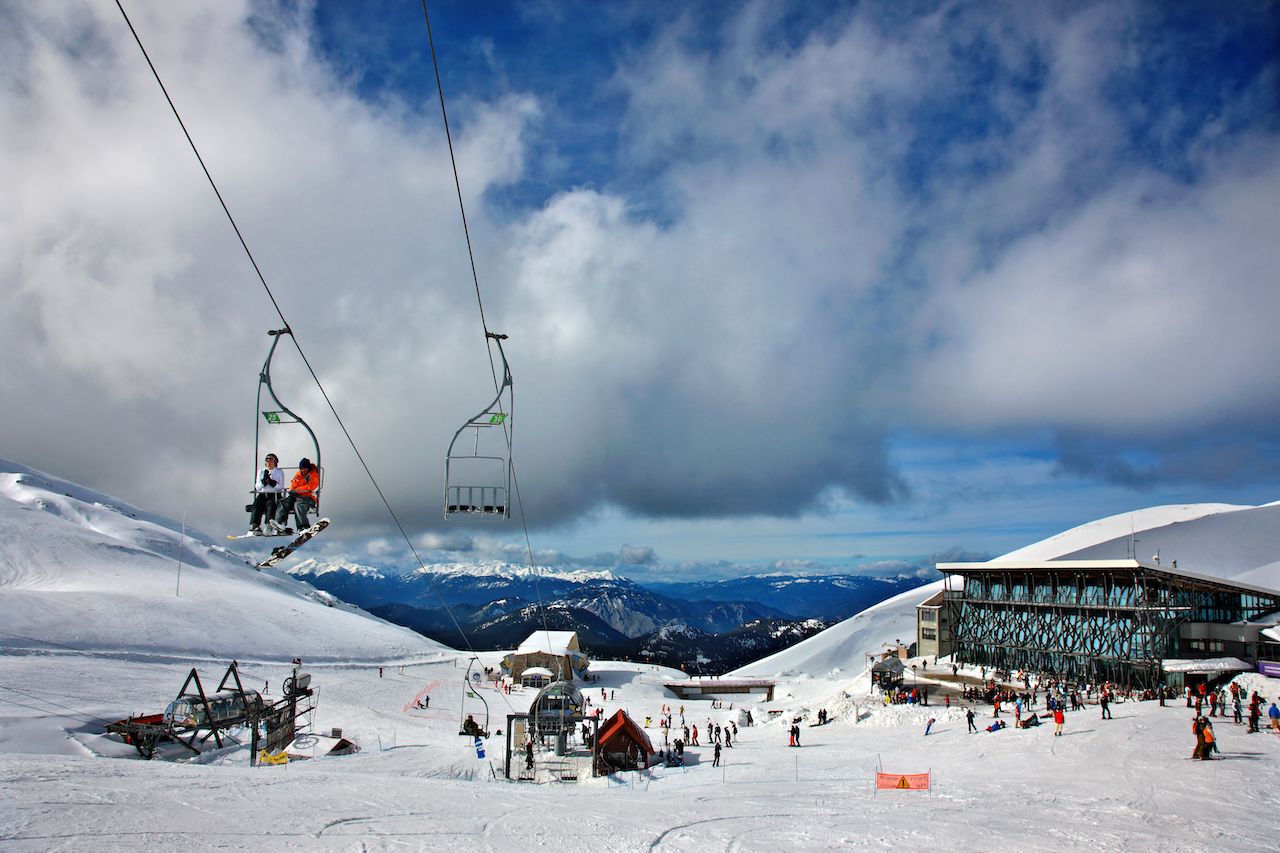 Greece is most famous as a summer destination for tourists wanting to explore the ancient ruins and relax in the sun-soaked islands. But Greece should also be considered a winter destination. Mount Parnassos Ski Centre is about two and a half hours from Athens. Here, you can cruise beginner friendly to advanced slopes where Zeus created the human race anew and near where the Oracle of Delphi was located.

You can manage one day at Parnassos, if you wake up early and head back late to Athens. But you could also stay at relatively luxurious accommodations for less than $100 per night. Lift passes are less than $35 per day. Beyond that, you can enjoy excellent Greek cuisine while on the mountain.

Or you could eat light and go big on the après scene instead. Really, the best thing about skiing in Greece is the festive Greek atmosphere. So do consider staying the night and hitting up some bars in Delphi. Just be warned that skiing has become very popular in Greece. Mount Parnassos is the closest mountain to Athens and also the biggest, so be prepared for crowds and slightly higher costs during peak times. 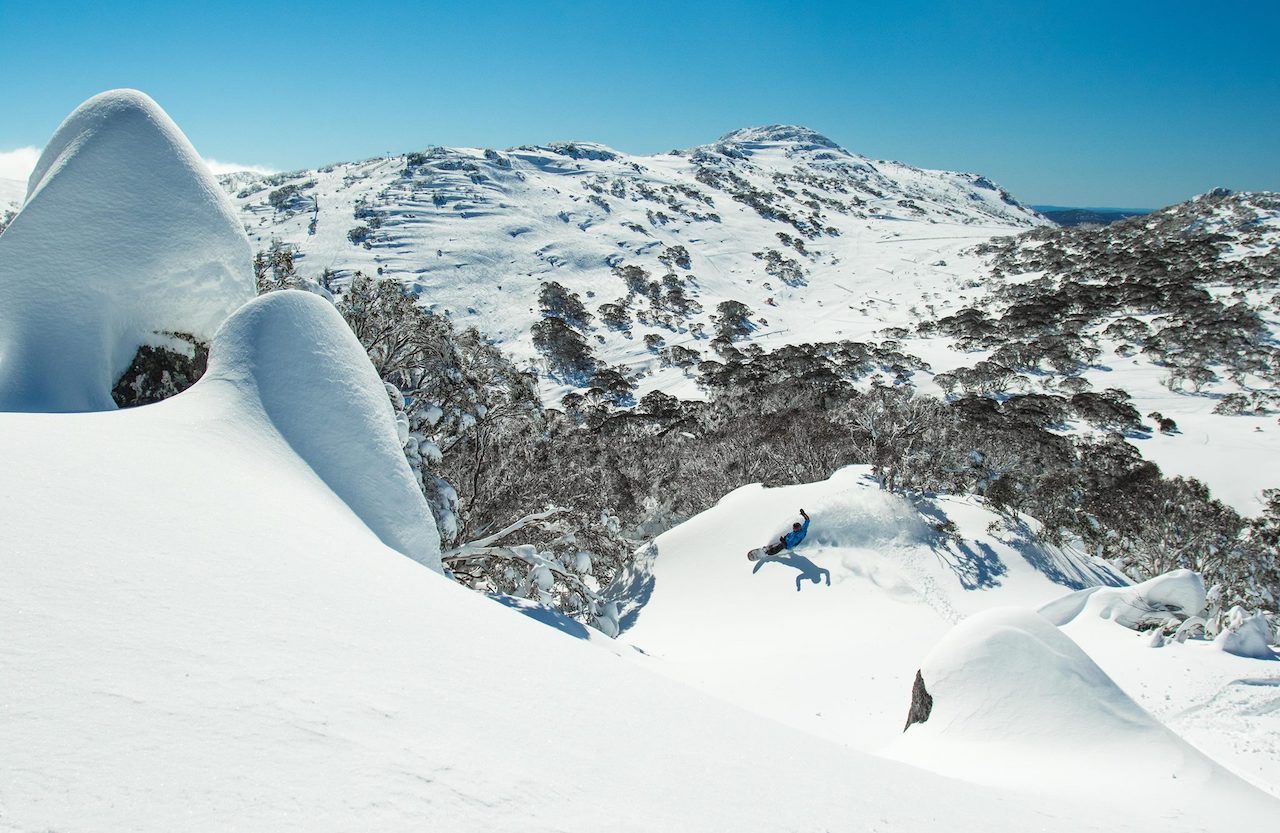 Perisher Ski Resort is well south of the equator, so if you’re all booked for this season, this may be the place to go next summer. You’ve heard of skiing in New Zealand and perhaps also Chile, but skiing in Australia should also be on your radar. In fact, most people would be surprised to learn that Perisher is the largest resort in the Southern Hemisphere.

One thing that makes Perisher so big is that it has four different areas to explore. It has over 40 lifts and over 60 miles of trails. Here they have slopes from beginner to advanced, and a massive terrain park. If you’ve wondered why Australia produces so many great snowboarders, you just need to look at its terrain parks — and probably its surfers as well — to see why.

The biggest issue for Perisher is that snowfall has been inconsistent year after year — so be sure to check into that before you pack up your travel ski bag in July. If there is snow, there’s something to be said for skiing with the lemony scent of eucalyptus trees in the air. Although Perisher is now owned by Vail Resorts, you can’t use your Epic Pass. (But the Australian Epic Pass does offer discounts to US resorts.) A one-day lift pass, which is the most expensive way to purchase one, is about $80. As for dining and lodging, you’ll find all the luxuries and comforts of any well-developed ski resort here.

Ski & SnowThe Ultimate Guide To Skiing in Bosnia and Herzegovina
Tagged
Trip Planning
What did you think of this story?
Meh
Good
Awesome