As you would expect from a vibrant, popular, and diverse city like Berlin, you can find every type of accommodation here, from sumptuous five-stars and bolthole boutiques to buzzy backpackers and longer-stay apartments. Good options of all kinds are to be found all over the city these days, so be sure to research the neighborhood you want to spend most of your time in. Here are some of the best accommodation options for visitors looking to fully interact with everything Berlin has to offer. 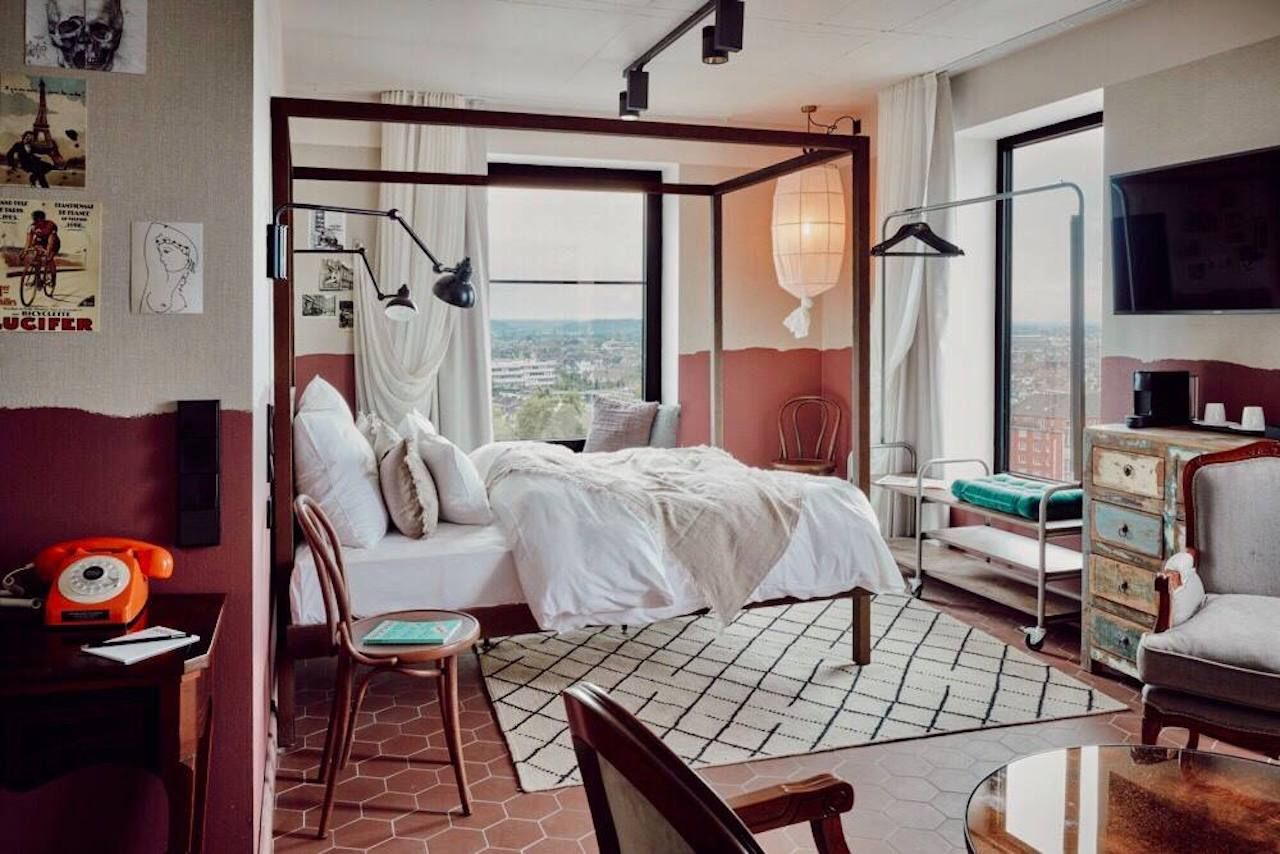 25hours Hotel Bikini — This hip hotel and its adjacent boutique shopping mall have helped liven up the formerly drab Zoologischer Garten area quite considerably. The hotel’s cheerful, playful interior by local designer Werner Aisslinger includes lots of foliage, bikes hanging from walls and ceilings, graffiti scrawls, and lots of quirky touches — exposed concrete, fur-lined hammocks, slogans. Some of the rooms look over the neighboring zoo, and there’s an in-house bakery, a “Working Lab” for digital natives, and a great rooftop restaurant, Neni, and bar, the Monkey Bar. The Kaiser Wilhelm Memorial Church is right across the street too.

nHow — One of the city’s more idiosyncratic hotels, the nHow (pronounced “now”) is perched right on the river Spree and has an eye-popping interior full of bold pinks and curvaceous lines courtesy of NYC designer Karim Rashid. It’s popular with music lovers thanks to its proximity to Universal’s HQ and the Watergate club, both of which are just down the road, as well as its two in-house recording studios and guitars and drum sets that can be rented from reception. There’s also a chic bar and restaurant that spills out onto the riverside promenade in summer. 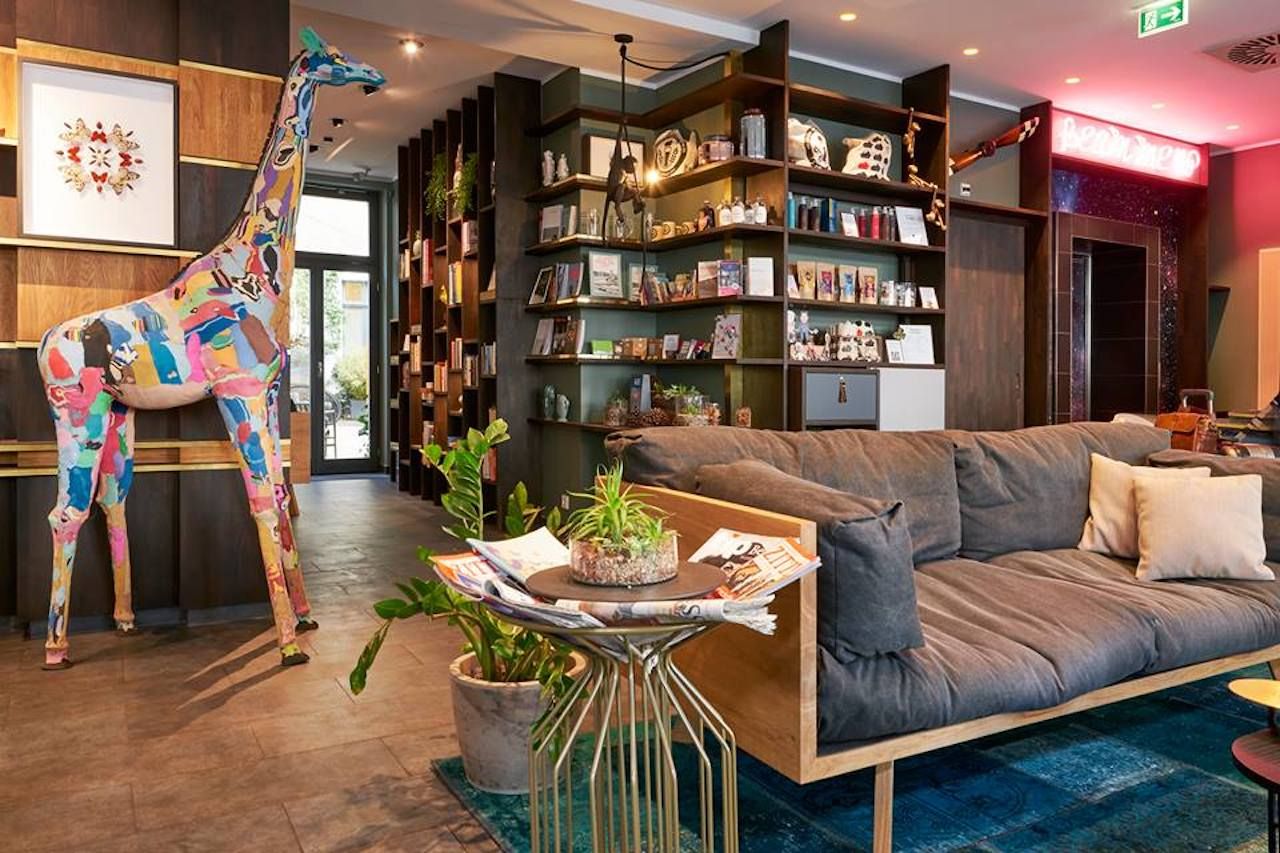 Circus Hotel — This ideally located hotel lies right on buzzing Rosenthaler Platz at the heart of Mitte’s food, art, bar, and boutique scenes. The ground floor has a funky café and bar with a trendy assortment of seats and sofas and large windows for people-watching; rooms are warm and appealing with good quality custom furnishings and very comfy beds, plus there is an outdoor courtyard and rooftop terrace for warmer weather. If you’re on a budget, you can try the cheaper but equally friendly and cool Circus Hostel just up the road. 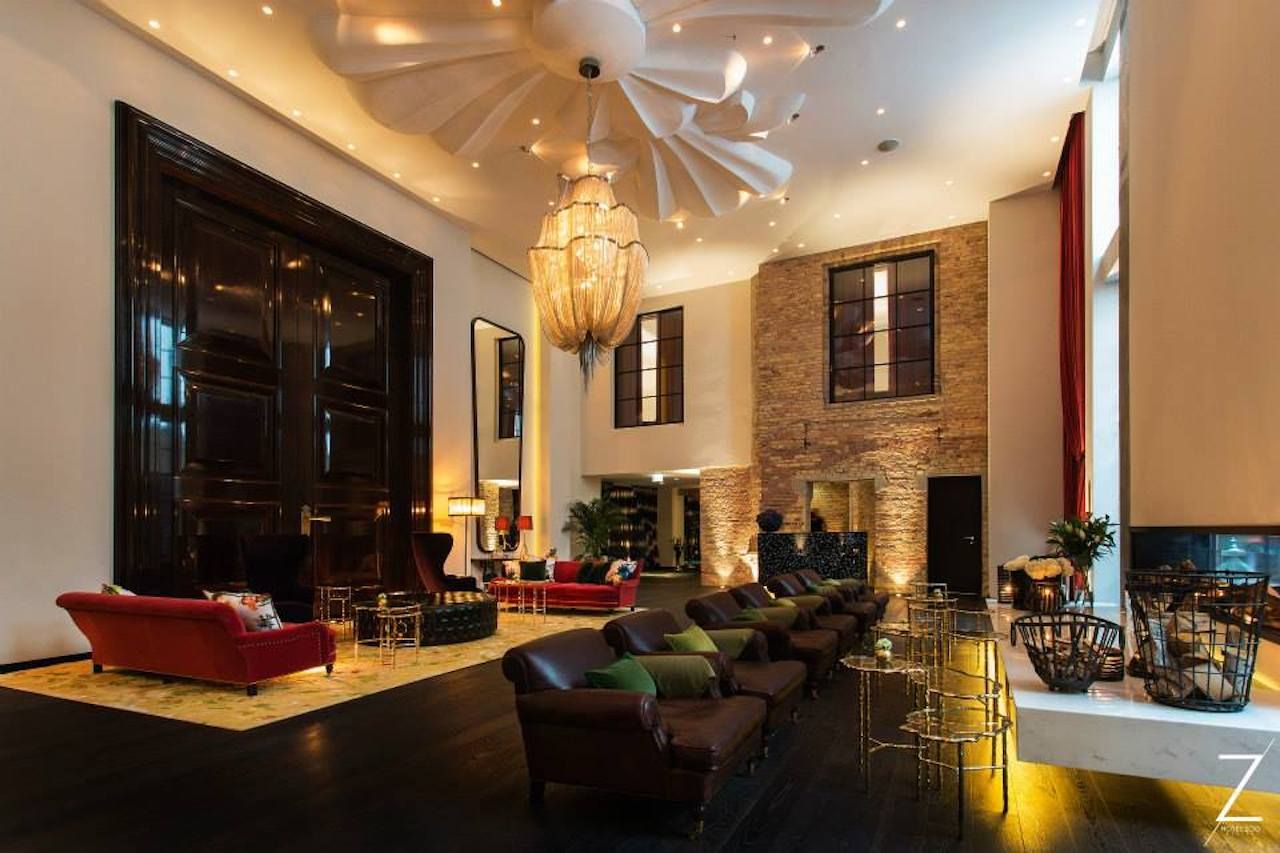 Hotel Zoo — The premier VIP location for the city’s annual Berlinale festival in the swinging sixties, this classic West Berlin hotel was restored to its glamorous state in 2014. The interiors, by American designer Dayna Lee, are some of the sassiest in the city, with refined leather chairs and sofas, elegant fabrics and furnishings, and fine art and fashion images strewn throughout the stately lounge and 144 rooms. The in-house GRACE restaurant is similarly swanky, the adjacent bar knocks out killer cocktails, and there’s a roof terrace for upscale summer lounging.

S/O Das Stue Hotel — This hotel’s location right next to Berlin’s Zoo and the sprawling Tiergarten park is only one of its draws. It’s also set inside a very elegant 1930s building that was once the Danish embassy and is as striking inside as it is outside, thanks to the tasteful designs of Patricia Urquiola. The hotel’s showpiece, a restored staircase, leads to a chic bar and lounge, as well as two restaurants; one of them, Cinco, has a Michelin-star. There’s also a cute garden area and a spa with an indoor pool and sauna. 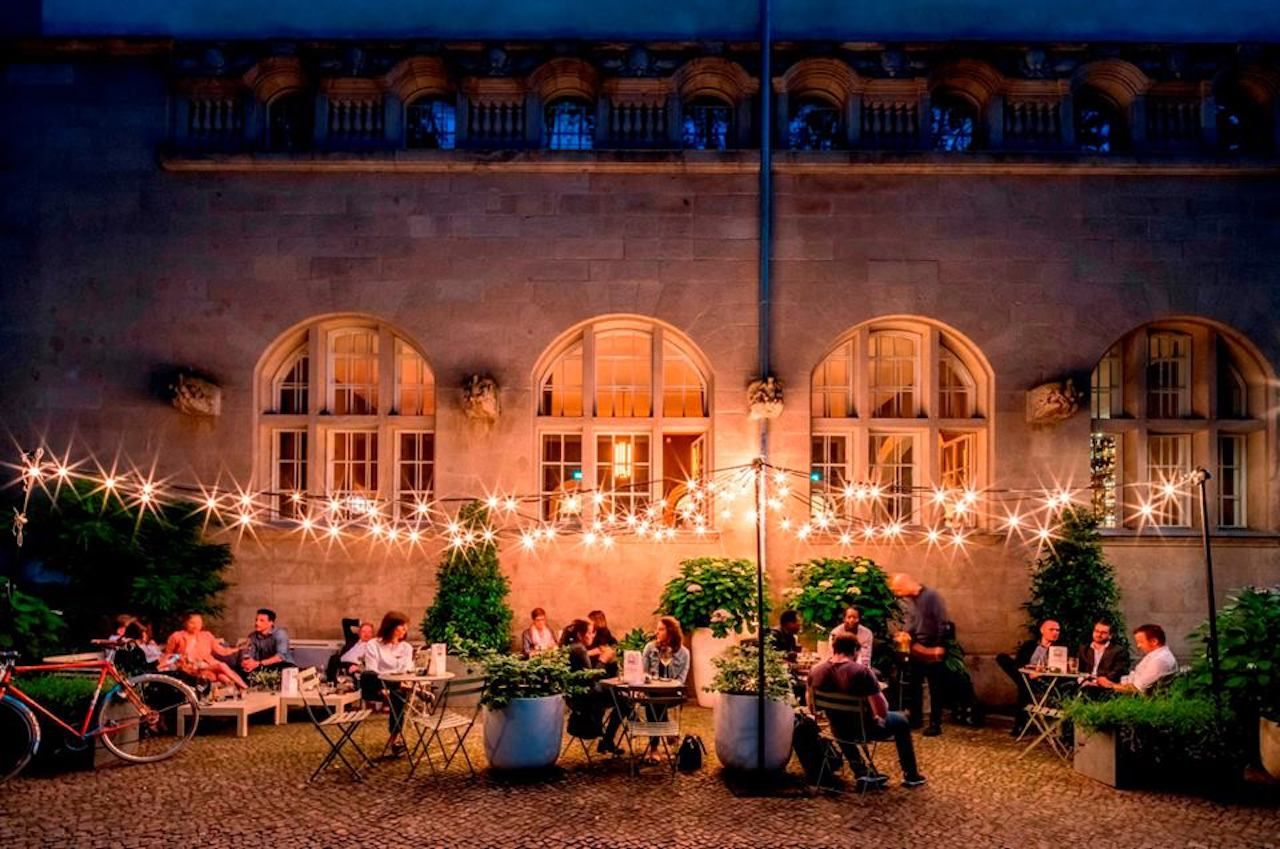 Hotel Oderberger — This plush new hotel opened in 2016 and quickly became the hottest stay in Prenzlauer Berg. Set inside a former 19th-century bathhouse, it features original and restored staircase banisters, ceramic wall tiles, and wooden doors, some of which are preserved in glass. The rooms are elegantly decorated with oak floors, fine fabrics and arty pictures, and the former boiler room now houses a three-level restaurant serving upscale German food. Best of all, the indoor pool has also been fully restored and now comes with a sauna too.

Titanic Gendarmenmarkt — Located right next to Berlin’s glamorous Gendarmenmarkt, this luxury hotel has plush designer rooms (some of which have balconies) and public spaces peppered with contemporary furnishings and Art Nouveau artworks. There’s a fine-dining steakhouse and adjoining seductive bar on the ground floor, plus a large spa with a gorgeous marble-clad Turkish hammam. It’s ideally located for Friedrichstrasse’s theaters, restaurants, and shops, and the service is especially helpful and professional. 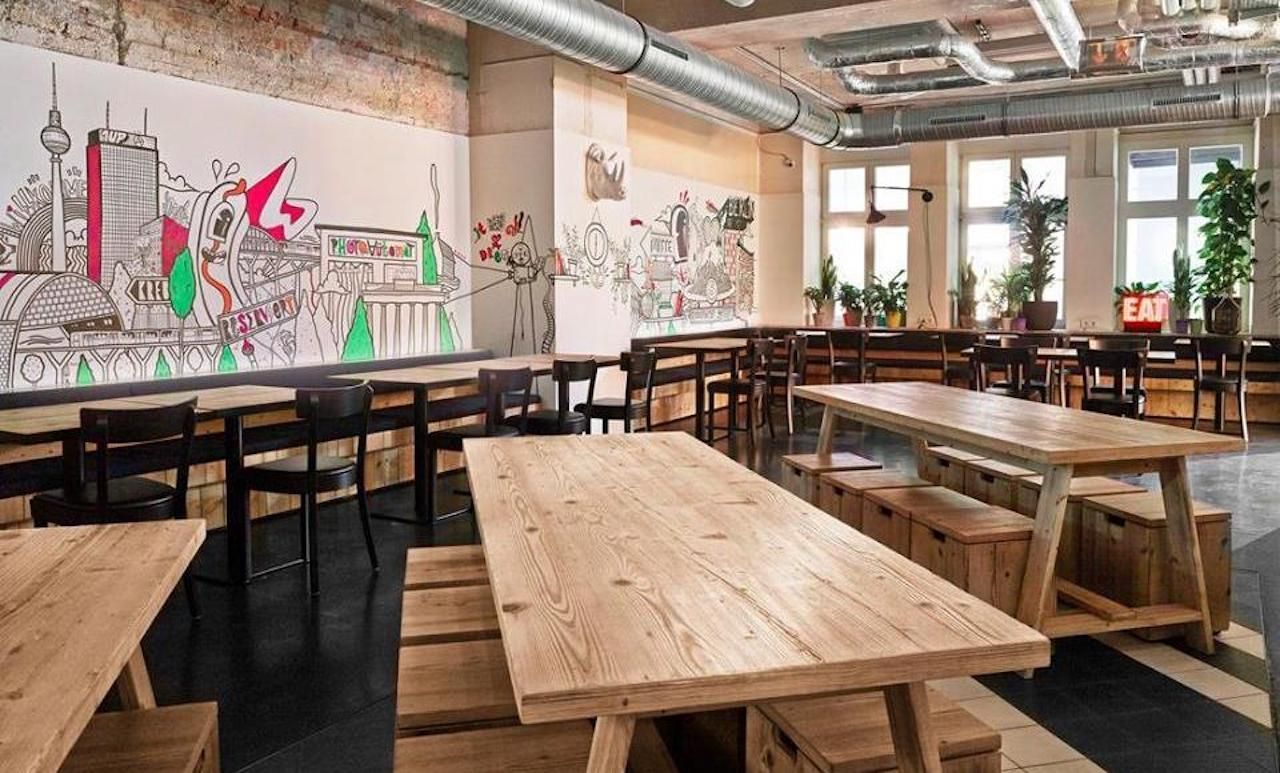 Generator Berlin Mitte — This vibrant hostel enjoys a great location on Oranienburger Strasse, close to a lot of the city’s main sights like the Museum Island, Jewish Synagogue, and bustling Friedrichstrasse. It’s an immediately likeable place with an industrial-chic aesthetic and urban street art by Berlin artist Thierry Noir. There’s a small but friendly café, dorms and rooms have good quality beds and lockers, and the surprisingly swish bar has live comedy nights, DJs, and other events. The courtyard — with its sculptures, plants, and foosball — is also a popular summer hangout.

Pfefferbett Hostel — This cheap and cheerful hostel is part of a renovated brewery complex, Pfefferberg, which offers restaurants, theaters, art galleries, and more. It’s ideal for exploring leafy Prenzlauer Berg or dynamic Mitte, and its rooms and dorms are spacious, clean, and comfortable. The café-lounge area transforms into a bar serving craft beer and burgers in the evenings, and facilities like a pool table, organized tours, and a cozy fireplace in winter make it a lively and popular spot. 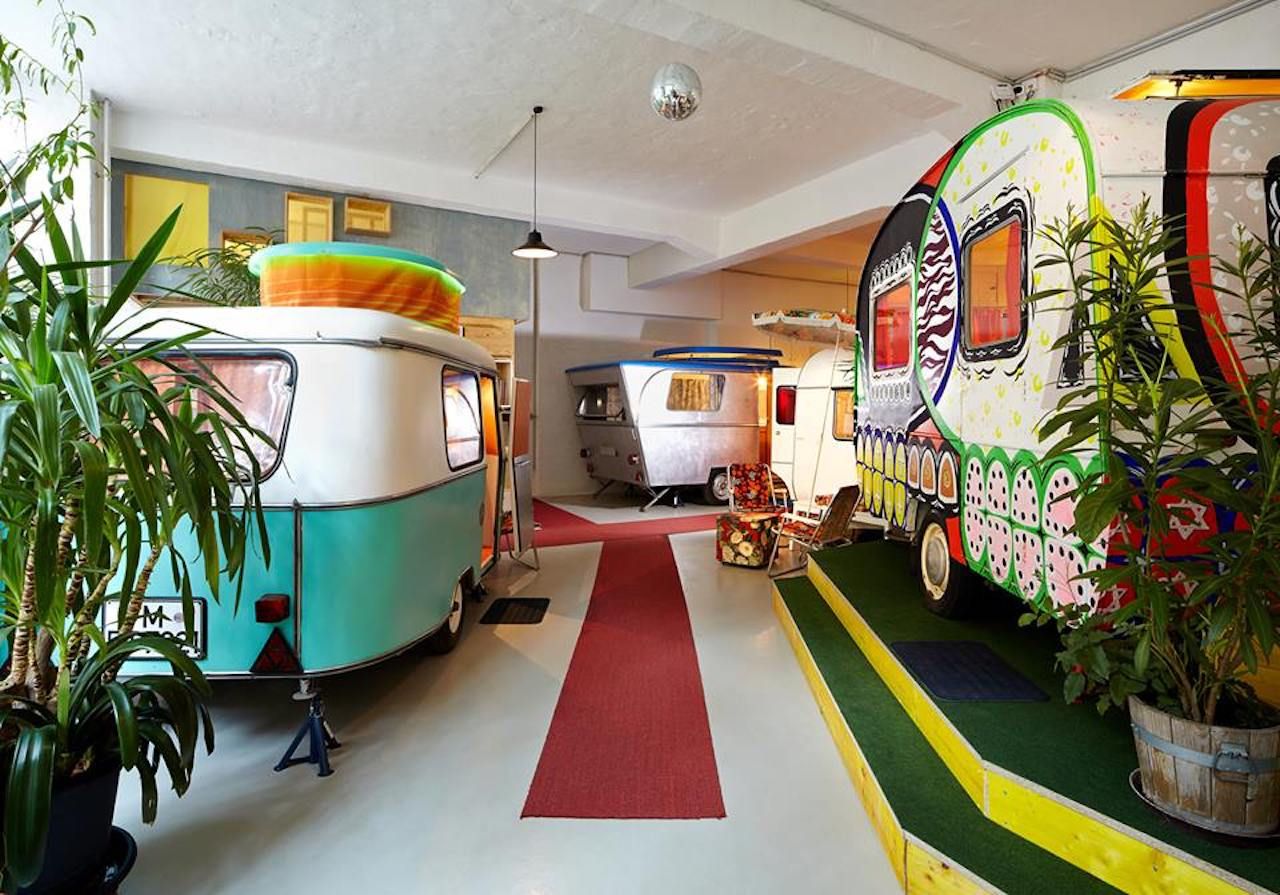 Hüttenpalast — A great place for exploring the hipper corners of Neukölln, this quirky “urban glamping” hotspot offers vintage caravans from the 1960s and 1970s and cute, self-built Alpine-style huts. They’re all spread across two large halls in a former vacuum factory, and although the interiors are necessarily small, and the toilet and shower facilities are shared, each place also has its own extra outside area with chairs, tables, and lamps. There are also spacious double rooms for those who want more privacy.

EastSeven — This laid-back Prenzlauer Berg hostel has a bit of an old-school vibe, with simple but clean dorms, friendly service, and a cozy room and kitchen that serve as communal hubs. Although it’s on a quiet residential street, it’s only a few minutes to Alexanderplatz and the busier parts of Mitte, and the friendly staff are a hive of local information. It’s the antithesis of a party hostel but it’s still highly sociable; there’s also a pleasant courtyard garden, but you’ll have to be quick to bag the hammock in summer. 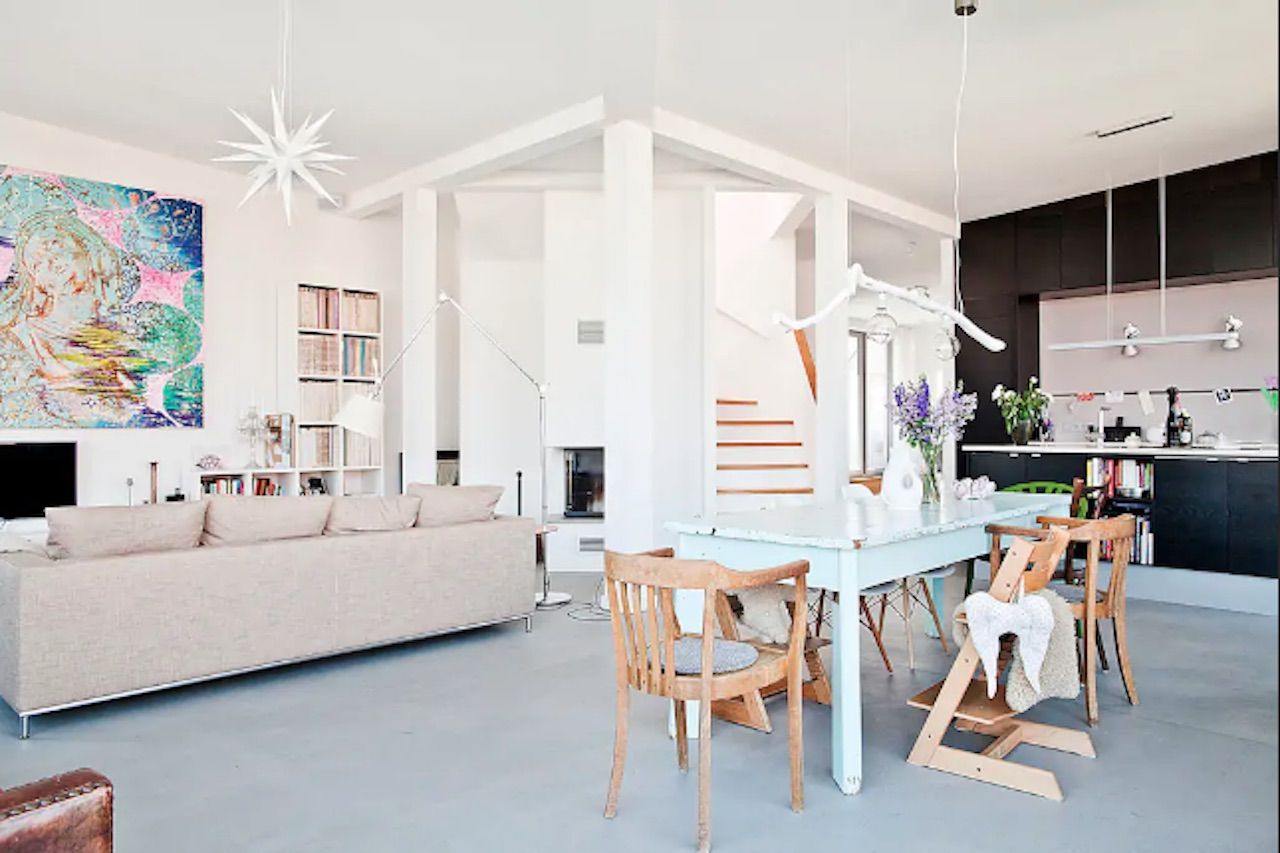 Large penthouse with stunning view in Prenzlauer Berg — This penthouse apartment, situated on the fifth floor of a turn-of-the-century building in pretty Prenzlauer Berg, measures a whopping 180 square meters, has stunning views over Alexanderplatz, and a striking rooftop garden. The two double bedrooms make it ideal for a family (there’s a children’s room with bunk beds also), and the location means that areas like Alexanderplatz, Mitte, and the Museum Island are all within easy striking distance. There’s also a new and fully equipped kitchen, and a spacious living and dining room. 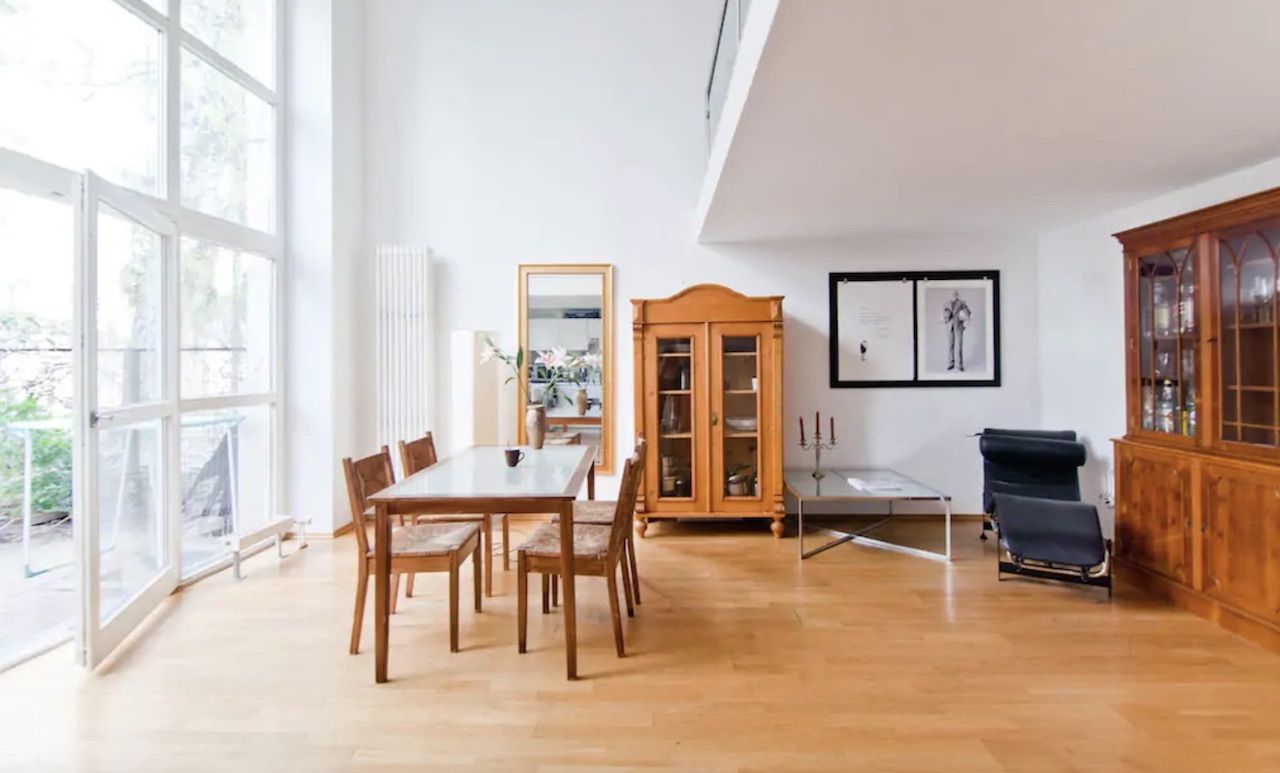 Two-bedroom loft maisonette in City West — This light-filled City West bolthole is simple, charming, and pleasantly decorated with good quality furnishings. The large glass front wall lets in plenty of natural daylight and leads to a small garden. There are two double beds and a sofa, making it great for couples, friends, or families. Amenities include a large flatscreen TV, Nespresso machine, and (our favorite) a vinyl record player. The Kurfürstendamm boulevard and Savignyplatz are close by as are an array of theatres, galleries, shops, cafes, and restaurants. 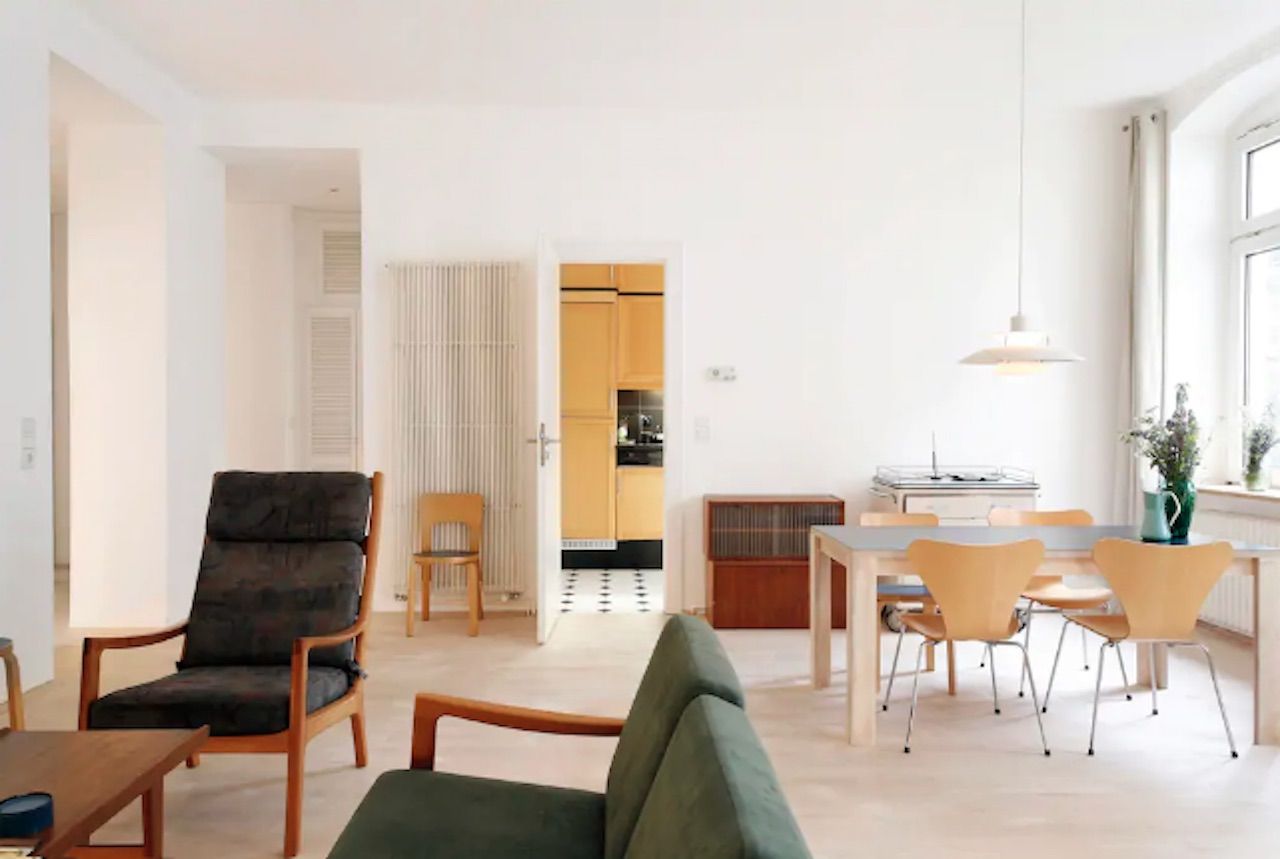 Quiet apartment in Kreuzberg — Located in the buzzy district of Kreuzberg, this stylish apartment has been slickly kitted out in mid-century, Scandi-minimalist style with furnishings from Danish design mavens Arne Jacobsen, Ole Wanscher, and Poul Henningsen — even the shelves are sleek. There’s an office space, a balcony, and the location — in the trendy Graefekiez — is brimming with indie cafes, restaurants, and bars. The bedroom has a double bed, the office is ideal for work, and the whole apartment is perfect for a couple with a passion for design.