Berlin is world famous for its nightlife. Clubs here offer some of the best electronic music in the world, and parties can go on for days. But the city is more than its celebrated club scene. Aside from techno at major clubs like Berghain or Tresor, there are excellent live music venues dedicated to rock, jazz, and more. Even if you’re not looking to dance, the bar scene is vibrant and diverse, ranging from elegant wine bars to gloriously scruffy dives.

There’s something for every person and every type of night in Germany’s capital city. All you have to do is know where to look. 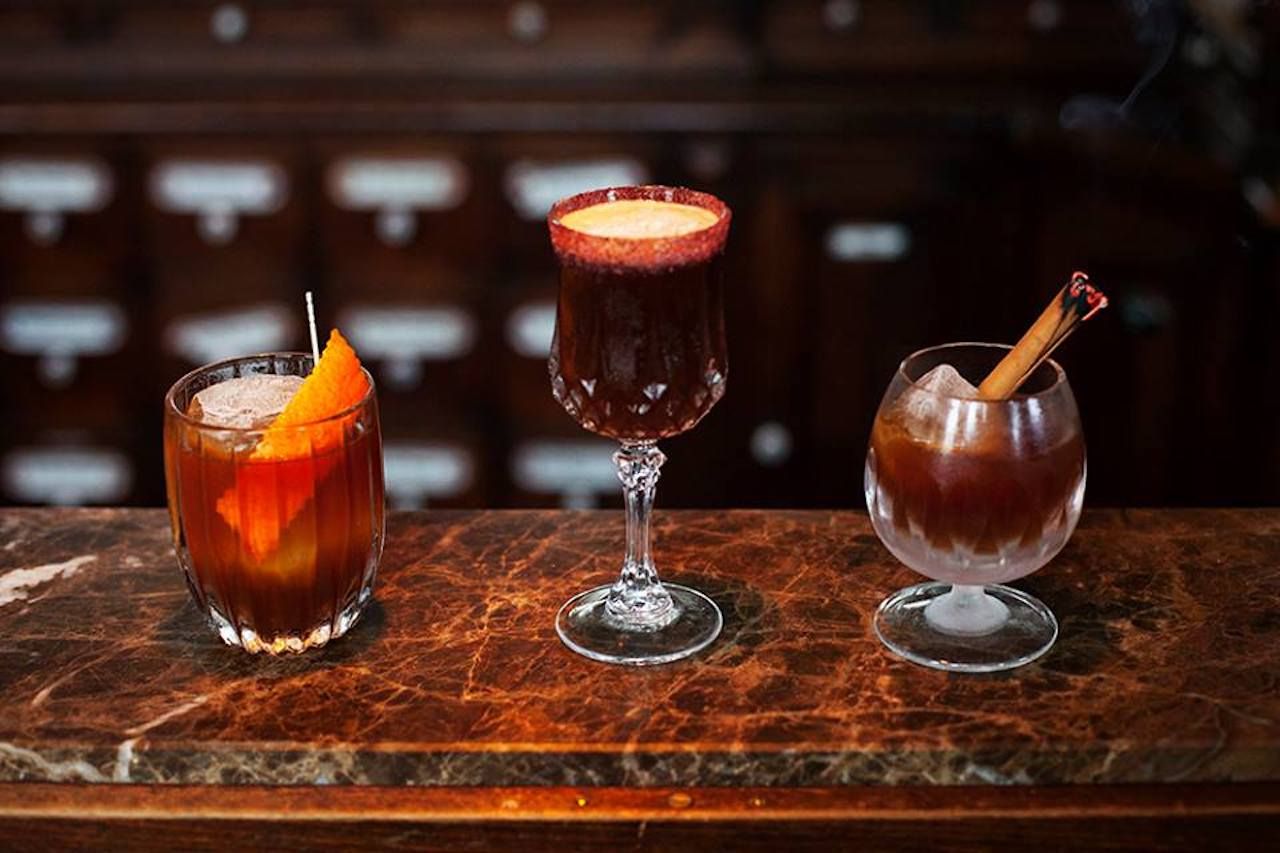 Ora — Housed in what used to be a pharmacy (Apotheke) on Kreuzberg’s Oranienplatz, Ora makes use of the building’s original 19th-century interior but adds modern furnishings and décor. The menu features tasty, seasonal food and excellent wine and cocktails, some of the latter lovingly prepared with local herbs and spices.

Das Hotel — A charming and simple bar located just off Kreuzberg’s buzzy Paul-Linke-Ufer near the Landwehr canal. It has a couple of small rooms dotted with wooden tables, vintage furnishings and some eccentric décor, and is especially cozy at night. To drink, order a classic or slightly altered classic off the cocktail menu. There’s a basement bar below with a dance floor (and a separate entrance), but take note: You’ll need to get here early on weekends to snag a table. 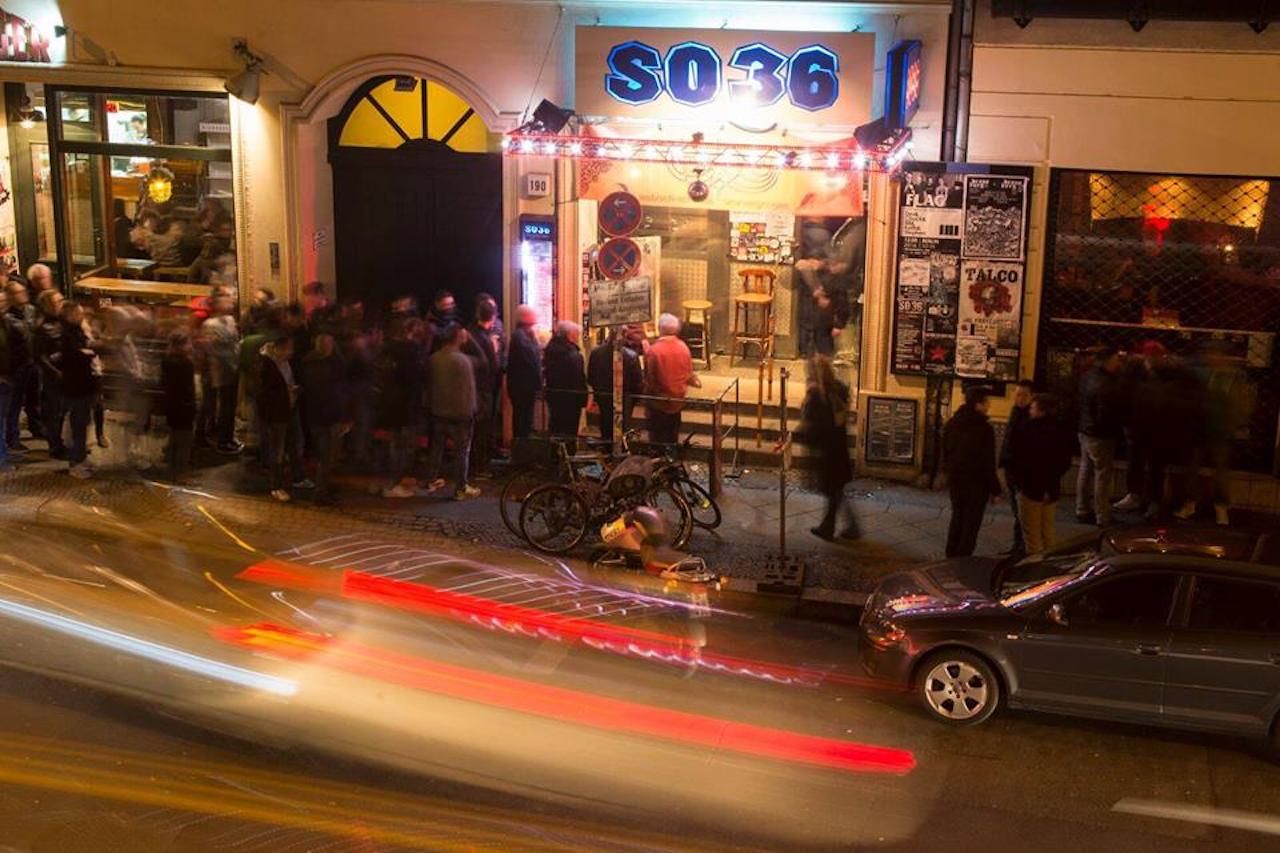 SO36 — This legendary punk venue was famous in the ‘70s and ‘80s for its radical lineups and left-wing politics. It may have lost its anarchist bite a bit since its pre-Wall heyday, but it’s still wonderfully alternative — SO36 is just a large black-walled room with a decent sound system and cheap drinks — and still puts on some great punk and indie rock bands from around the world.

Club der Visionäre — One of the city’s favorite summer hangouts, this small bar-club is part of the sprawling Arena complex down at the Kreuzberg-Treptow border. Set on the banks of a small canal, Club der Visionäre has outdoor seating on the covered terrace and a tiny room for dancing that gets packed as the night wears on. It’s a good spot to use as a jumping off point for other nearby clubs like Arena, Ipse, Chalet, or Burg Schnabel.

Watergate — One of the slicker iterations of Berlin’s club scene, Watergate is a popular spot right on the Spree River that’s tucked neatly into the Kreuzberg end of the Oberbaum Bridge. The top-notch sound system is plied by a rotating cast of local and international DJs, and the music usually leans toward the more melodic side of techno and house. Come sunrise, the club’s terrace is a blissful place to chill in the sunshine. Expect long lines at weekends. 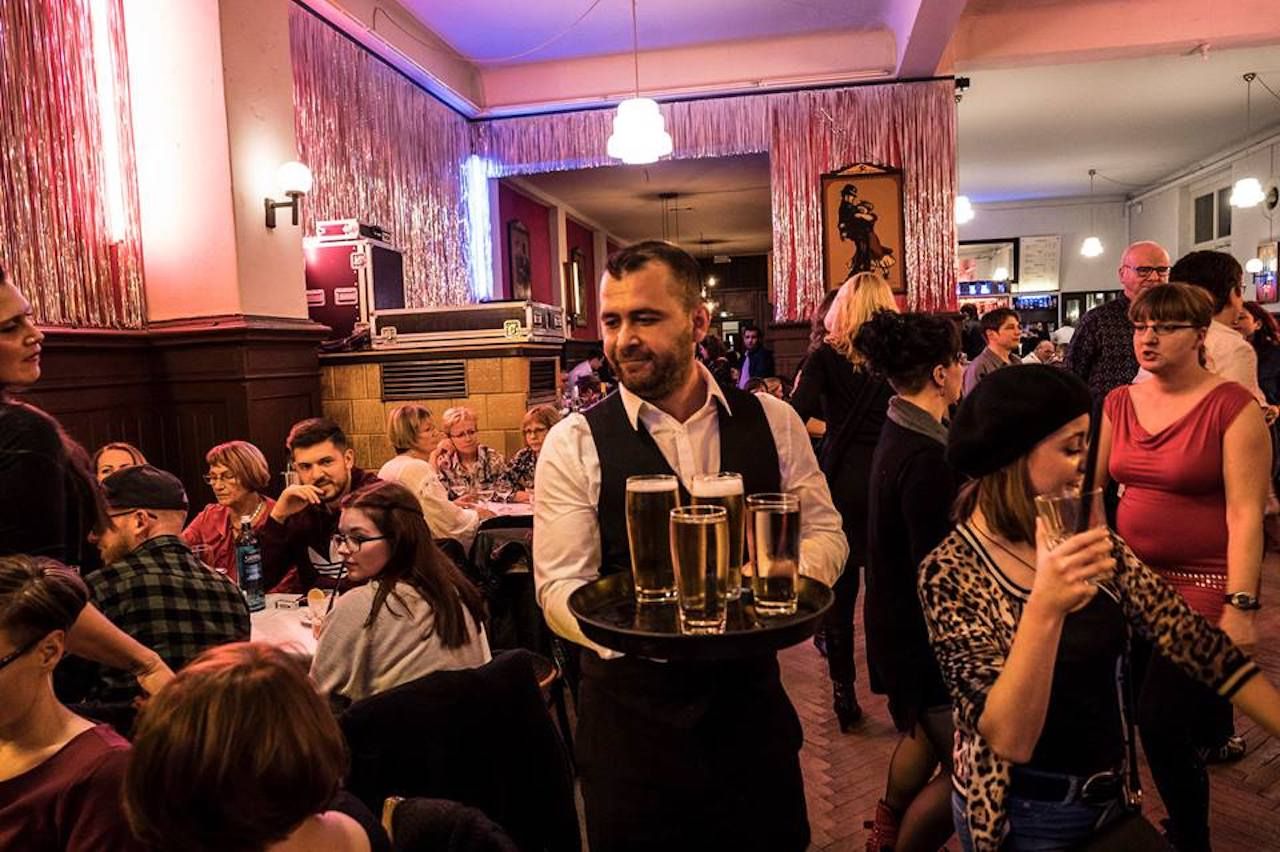 Clärchens Ballhaus — This legendary ball house has seen it all. Open for more than a century, its classic prewar interior and cracked and faded walls are worth a visit on their own. But there are also regular salsa and other dance classes, live bands on weekends, and special concerts in the upstairs salon, which still has bullet holes and other scars from WWII.

Kim Bar — This inconspicuous bar is a long-established favorite of the Mitte art crowd. It hosts regular DJ nights as well as exhibitions and films, and service is generally friendly and unpretentious. Come for the vibe and crowd. Drinks are affordable mixed drinks and basic cocktails.

Hackbarths — One of the few remaining old school pub-style bars in Mitte, Hackbarths has an unpretentious interior with a large, central bar; wooden tables and chairs; and a fairly loyal crowd of regulars. Service is reliably surly, the drinks list reassuringly limited, and there’s cake on offer during the day, as well as outdoor seating in warm weather. Sometimes, that’s all you need.

Castle Pub — Formerly located in Wedding, this friendly, down-to-earth craft beer pub moved to Invalidenstrasse in 2016. It’s a roomy place with plenty of sofas and vintage lamps (as well as normal chairs), and a solid indie soundtrack sets the tone. Castle Pus has a constantly rotating list of classic and craft beers on tap, bottled beer and cider options, and a healthy selection of gins. 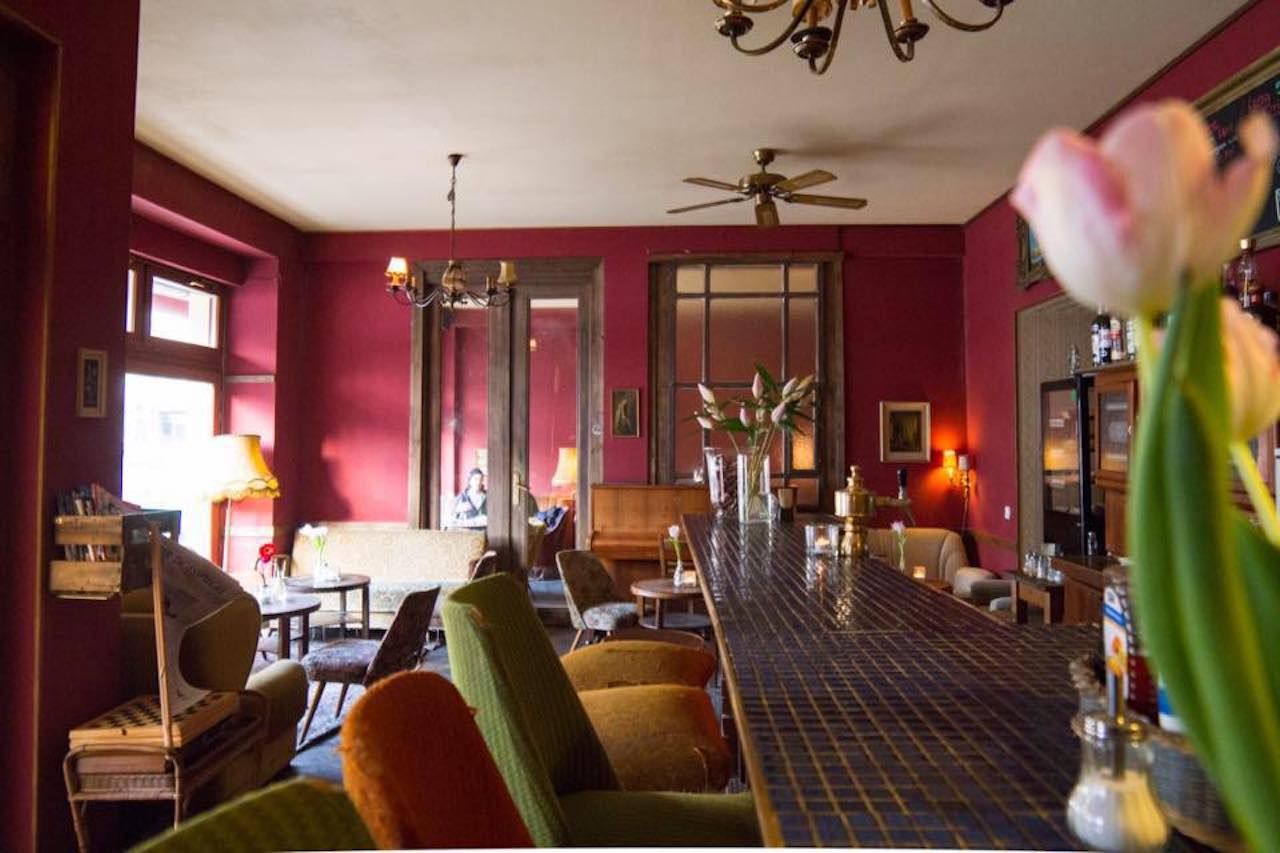 Macondo — This mellow, Spanish-themed wine bar is a lovely spot for a date night or drinks with close friends. It opens in the late afternoon and has a vintage lounge feel with a comfortable mix of sofas, chairs, and retro lamps that look out onto busy Boxhagener Platz. There are seats outside during the summer months, and the bar serves beer and mixed drinks, as well as Spanish and South American drinks and snacks.

Berghain — The granddaddy of Berlin clubs is set inside a former power station and draws people from all over the globe with its legendary techno-heavy lineups, purist music policy, and resistance to superficial lifestyle clubbing. The dimensions and aesthetic of the industrial interior alone is awe-inspiring, though you should note that getting past the bouncers is as difficult as they say (so, very difficult). If you do pass the test, be prepared to stay a while. The Saturday night session ends Monday morning. Also look out for ticketed events through the week and at the adjacent Berghain Kantine, which reduces the door stress somewhat.

Salon sur Wilde Renate — This squat-style DIY disco club is on the fringes of Friedrichshain on the border of Treptow. Run by artists with a focus more on upbeat disco and house music than hammering techno, it has a much more easygoing vibe than the bigger clubs and hosts burlesque and other fun themed nights. Getting in isn’t as difficult as other clubs either, though you’ll need to make a bit of effort (don’t be drunk, no groups of men, etc).

Raw Gelände — If you’re in Friedrichshain and unsure of where to go, head to this semi-derelict former train repair station. It’s been turned into an “urban culture” complex with a skate hall, outdoor pool, climbing wall, street-art gallery with a beer garden, pop-up restaurants, and flea markets. It also hosts a slew of late-night bars and clubs like Astra, Suicide Circus, Cassiopeia and Crack Bellmar. 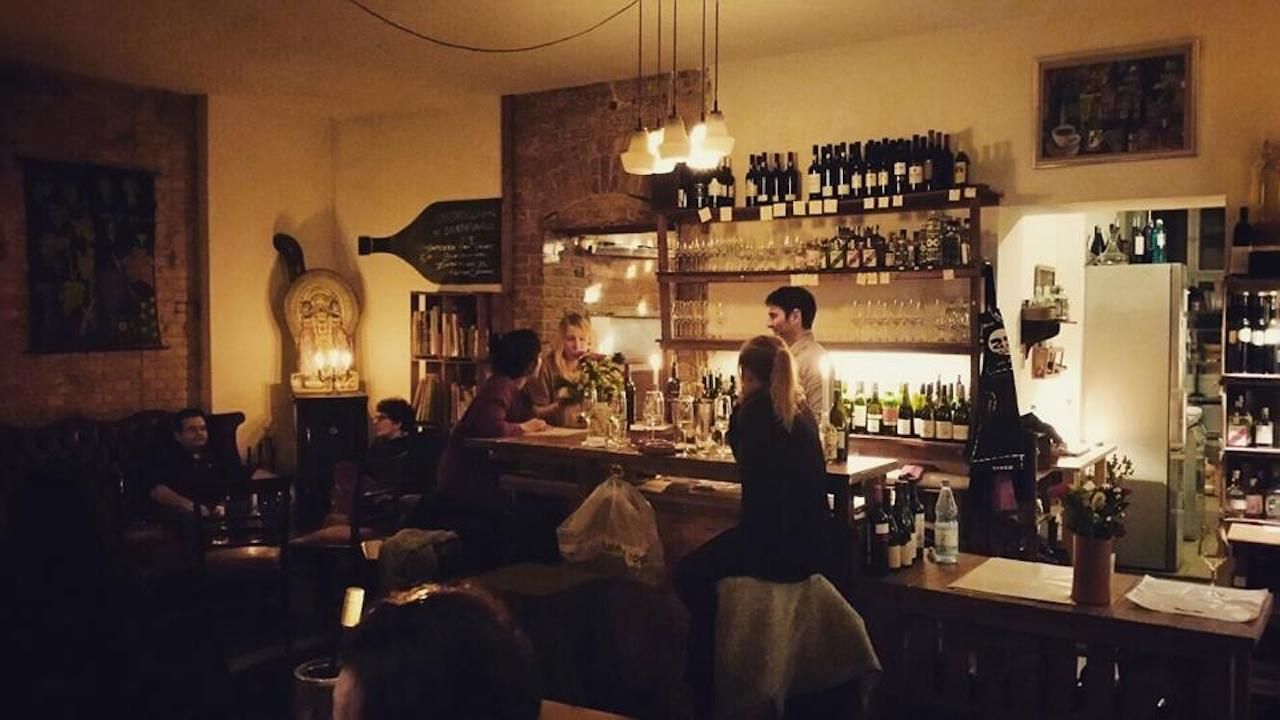 Vin Aqua Vin — This trendy wine shop and craft beer spot serves as a shop, event space, and convivial meeting point. Staff are happy to help you wade through the wide selection of drinks, and the cool atmosphere inside tumbles outside onto the pavement during summertime. Look out for regular beer and wine tastings.

Ä — This shabby-chic bar is one of the longer-running spots on Neukölln’s now-trendy Weserstrasse. Its dim, dive-bar interior has foosball and an alternative/indie soundtrack plays. Here, you’ll find a hip, international crowd drinking beer and simple long drinks.

Das Gift — A pub that was founded by a member of Scottish post-rock band Mogwai and his wife, Das Gift has become a reliable hangout for musicians, artists, expats, and locals. It has a mellow, no-frills interior, a drinks list full of Scottish ales, German brews, plus whiskey and cocktails, and some good pub grub. Check the website for upcoming exhibitions and quiz nights. 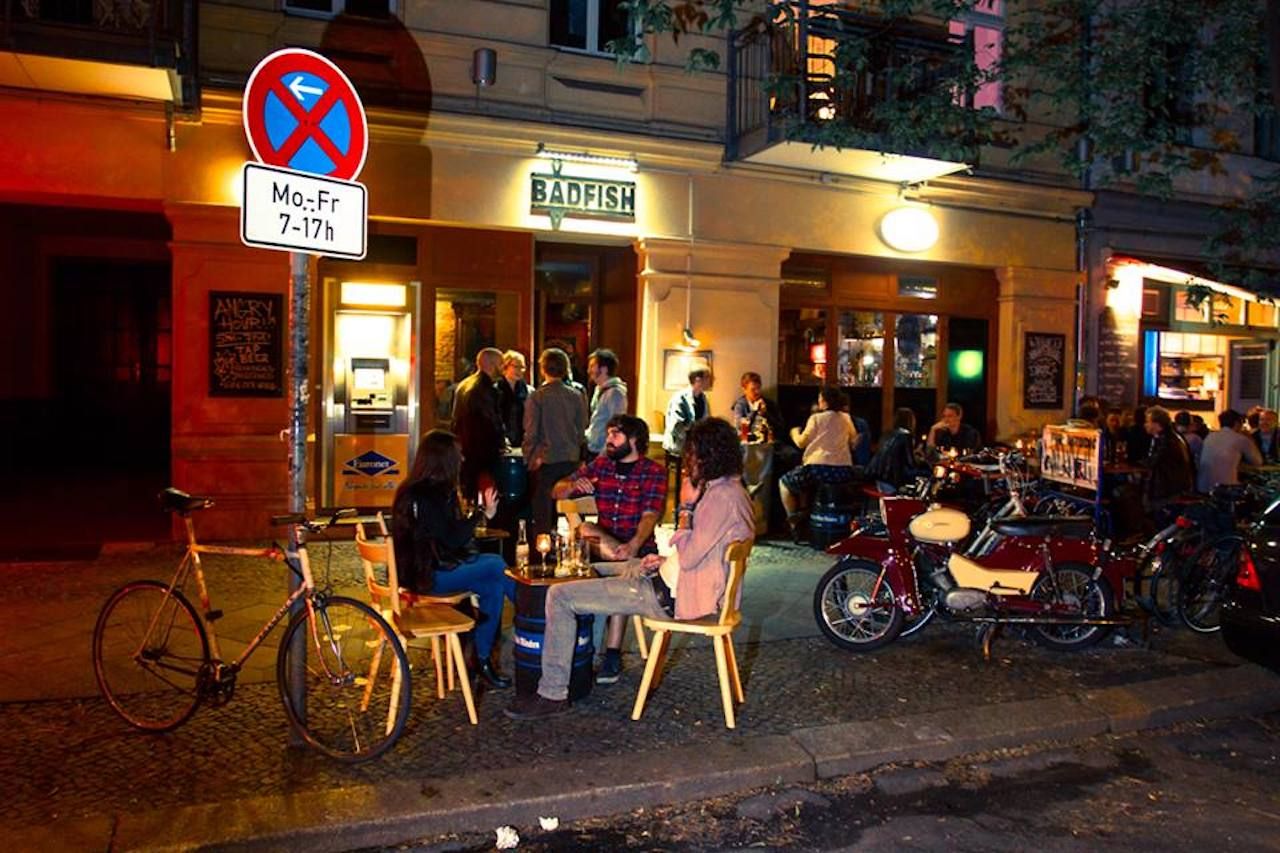 Badfish — Representing the new breed of Prenzlauer Berg bars, this loud, smoky, and raucous craft beer spot is packed on weekends, has great music playing from the jukebox, and a friendly staff. The IPAs and other draft brews rotate regularly, and there are plenty more bottled options in the fridge. If beer isn’t your thing, there’s whiskeys, gins, and even frozen margaritas when the machine is turned on.

Prater — The oldest beer garden in Berlin (dates back to 1837) still pulls in customers with its spacious courtyard, which is dotted with chestnut trees and simple hole-in-the-wall hatches where you can order beers, soft drinks, and sausages. There’s also a very good traditional restaurant on site for those looking for bigger meals.

Metzer Ecke — This welcoming family-run pub used to be a popular meeting point in the German Democratic Republic years. It still has something of a timewarp feel, with old photos of the neighborhood and previous guests (including former stars) on the walls, classic wooden tables, and a very reasonably priced menu of draft beers, wines, and classic German snacks and food.