While Jamaican all-inclusives and Bahamian cruise ports see visitor numbers rise year after year, the Colombian islands of San Andrés and Providencia continue to fly under the radar of many tourists. In fact, many people don’t even know they exist — even Colombians. As more and more travelers seek out lesser-known destinations, it’s unlikely to stay that way for long. For now, though, you can take advantage of their wide-open beaches and Rastafarian vibe without the crowds. Here’s everything you need to know about San Andrés and Providencia, and everything to do once you get there. 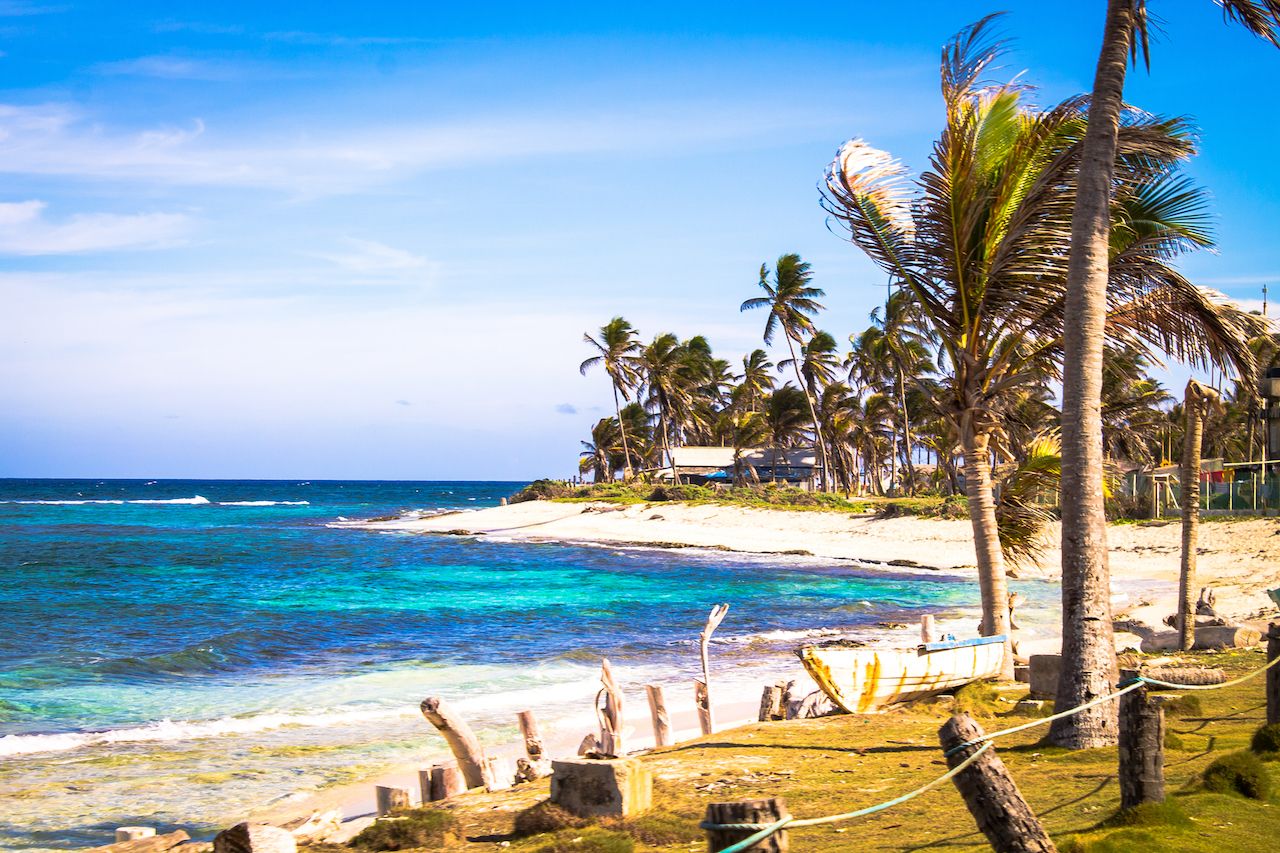 San Andrés is located 750 kilometers (470 miles) northwest of mainland Colombia and only 150 kilometers (93 miles) off the coast of Nicaragua. The smaller island of Providencia is a 3.5-hour ferry ride to the north, and while the islands have historically been tied to Spain, Great Britain, Africa, and Holland, they were the subject of a long-running battle between Colombia and Nicaragua until the 1900s. The frequent changing of hands has given them an eclectic mix of cultures and traditions, evident in everything from the cuisine to the fact that you’ll hear Spanish, English, and Creole depending on where you are — and in the more traditional Providencia towns, Elizabethan English.

While the tourism industry hasn’t flooded the islands, one organization that has acknowledged their existence is UNESCO, which in 2000 declared the archipelago of San Andrés a World Biosphere Reserve in order to protect the vast coral reef system and marine life. San Andrés and Providencia have largely been kept off the radar due to the past difficulty of getting to the islands. Prior to the opening of an international airport, the only way to reach the islands was from Bogotá.

San Andrés is an island rich with culture. 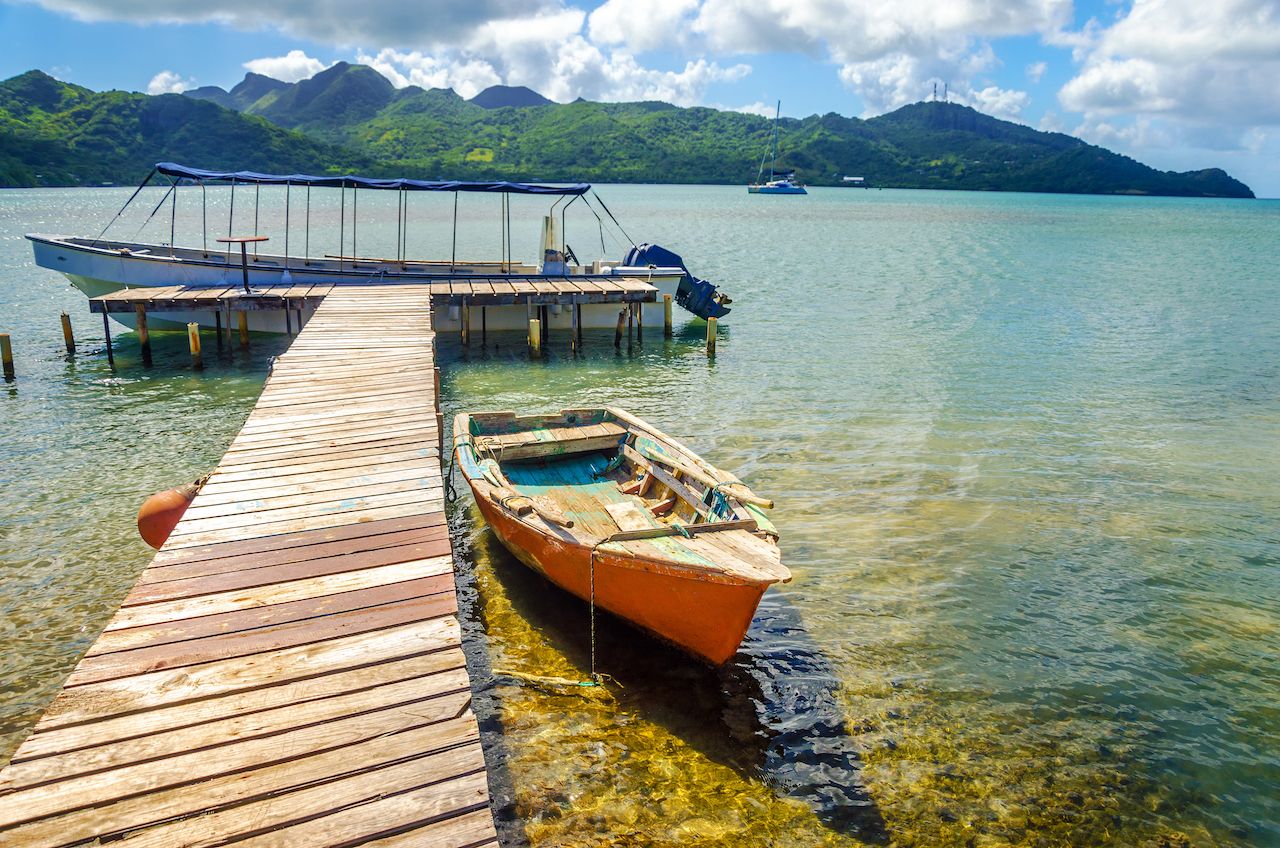 San Andrés’s heritage and influence are quite muddled, stemming from the English, African, Spanish, and French corsairs with a dose of pirate tossed in. As with mainland Colombia, reggaeton music runs through the islands, though you’ll hear everything from reggae and ragga to calypso, salsa, and vallenato music playing throughout the cafes, clubs, and public squares. Islanders like to dance and know how to party — and decorate — in style. You’ll see buildings hand-painted with bright colors, reflecting the passion and charm you’ll encounter when you get to know the locals.

Adding to the vibrant culture are a number of annual festivals for celebrations. They begin the year with the Crab Festival on January 1 when the island showcases an abundance of crab dishes along with dancing and live music throughout the day-long celebration. One of the major annual festivals is the Green Moon Festival, which takes place in mid-September. This festival is a celebration of the delicious local cuisine and also features lectures on music, documentaries on the island’s culture and history, and, of course, dancing.

The festivals end with the Patron Saint Festival, which takes place in late November and is the island’s tribute to the saint that the population entrusts. In addition to dancing, you can catch live performances, meander through food fairs, and even attend the Coconut Beauty Queen pageant.

Providencia and Santa Catalina are even more remote. 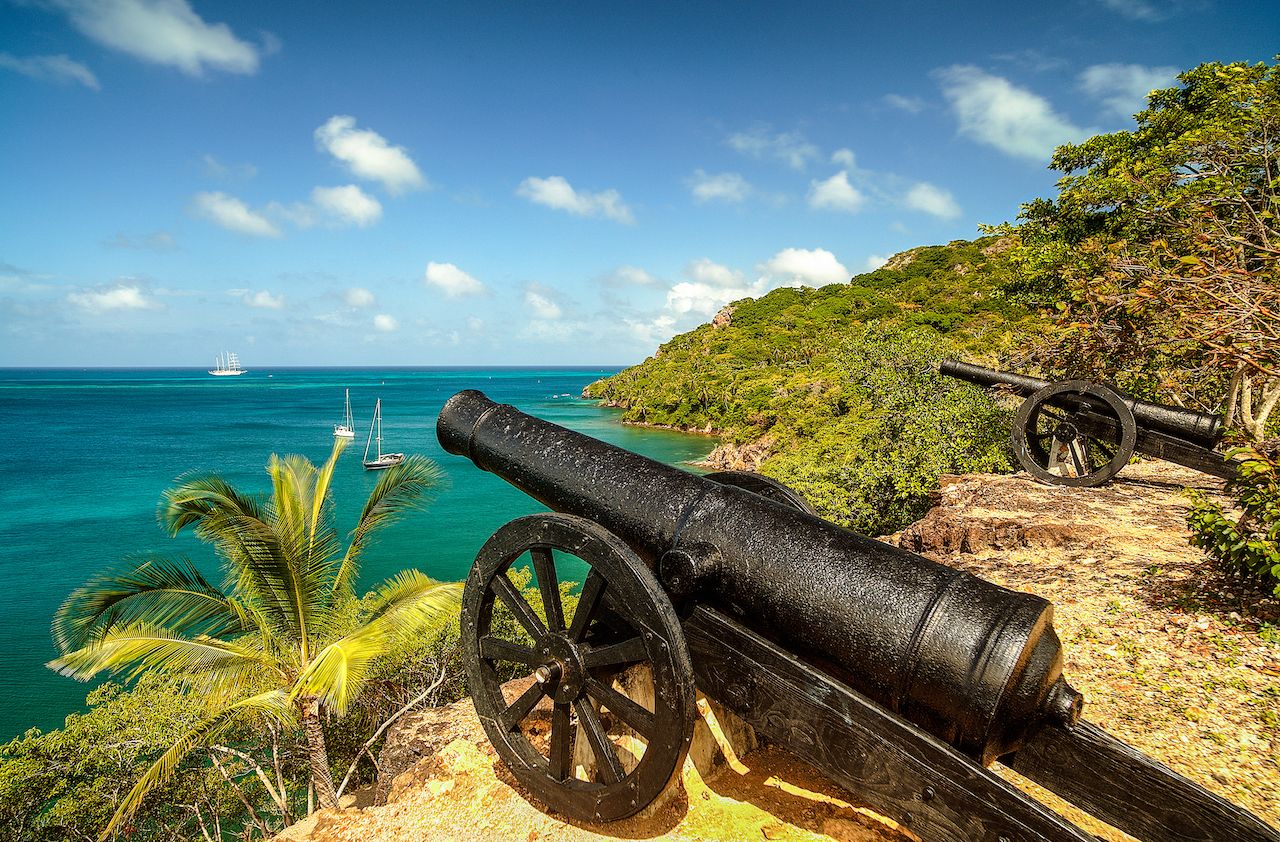 Providencia is not as commercialized as San Andrés and has predominantly kept its English influence from the era of colonization. The pirate Henry Morgan used the island as a base to store his treasure, and a local rumor has it that some hidden treasure is still present on the island. To protect his loot, Henry created forts and canons on the island that can still be seen today.

The island can only be reached by ferry or plane from San Andrés, and due to this, the majority of the island’s population is more influenced by Caribbean culture and Rastafarianism, speaking English and San Andres Creole more so than Colombian Spanish.

Providencia is surrounded by coral reefs with Old Providence McBean Lagoon National Park located on the northeast of the island. This protected area of 995 hectares is a popular spot for diving or snorkeling in the reefs and visiting cayes, mangroves, or lagoons. It’s surrounded by luscious tropical rainforest, and you can hike to the island’s highest point via an 800-meter (2,625-foot) eco-path past mangroves and fauna up to El Pico Natural Regional Park. Here, you’ll take in 360-degree views from the top. The island also has an abundance of deserted beaches that make for ideal diving or snorkeling excursions, along with white sandy beaches backed by undeveloped land.

Between April and May, the black land crabs that inhabit the hill on the island descend down to the ocean to breed. Thousands cover the beaches at the same time and lay their eggs in the sand, creating quite a spectacle for onlookers. Santa Catalina is very traditional with very few towns or facilities, but this makes it the perfect place to discover the deserted beaches of Morgan’s Head — a rocky cliff shaped like a human face– and Santa Isabel, connected by a pontoon bridge off the island with no beach or town.

The cuisine is the perfect blend of Caribbean and Colombian. 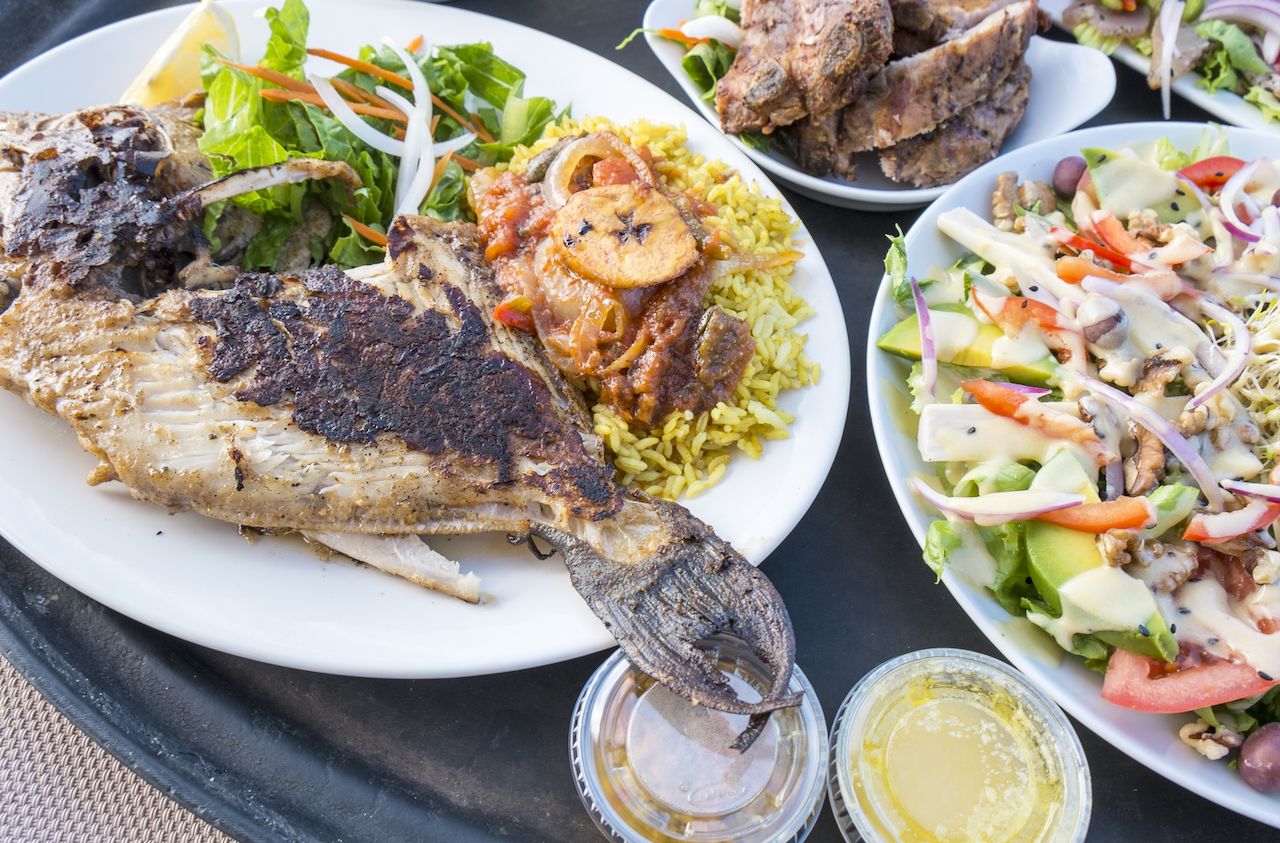 The cuisine on San Andrés blends traditional Caribbean dishes such as lobster, seafood, crab, snails, and trout with Colombian influences to create unique delicacies like crab empanadas and banana cake. One staple dish you must try is Rondon, a San Andrés fish that was traditionally prepared and eaten only by men but nowadays is enjoyed by everyone. The recipe is made up of fish fillet along with snails, cassava, yam, pork tail, plantain, dumplings, and coconut milk. You’ll notice coconut milk a lot during your visit; it is a key ingredient in local cuisine, as are a collection of vibrant spices like pepper, cinnamon, ginger, and cloves, many of which were inherited from the English.

Coconut rice is a traditional dish, typically served with plantains (in any form), Luca, cassava, and yams. Fish balls are an island staple, as well, made from any type of seafood, typically parrotfish, snapper, or crab. Preparation involves extracting the flesh from the fish and seasoning the balls with tomatoes, garlic, onions, and salt before frying them all together in a pan. For your sweet tooth, breadfruit is very popular whether it is cooked or fried, served as a side or sometimes even unripe. Other typical desserts include coconut balls, banana cakes, and fresh fruit juices. 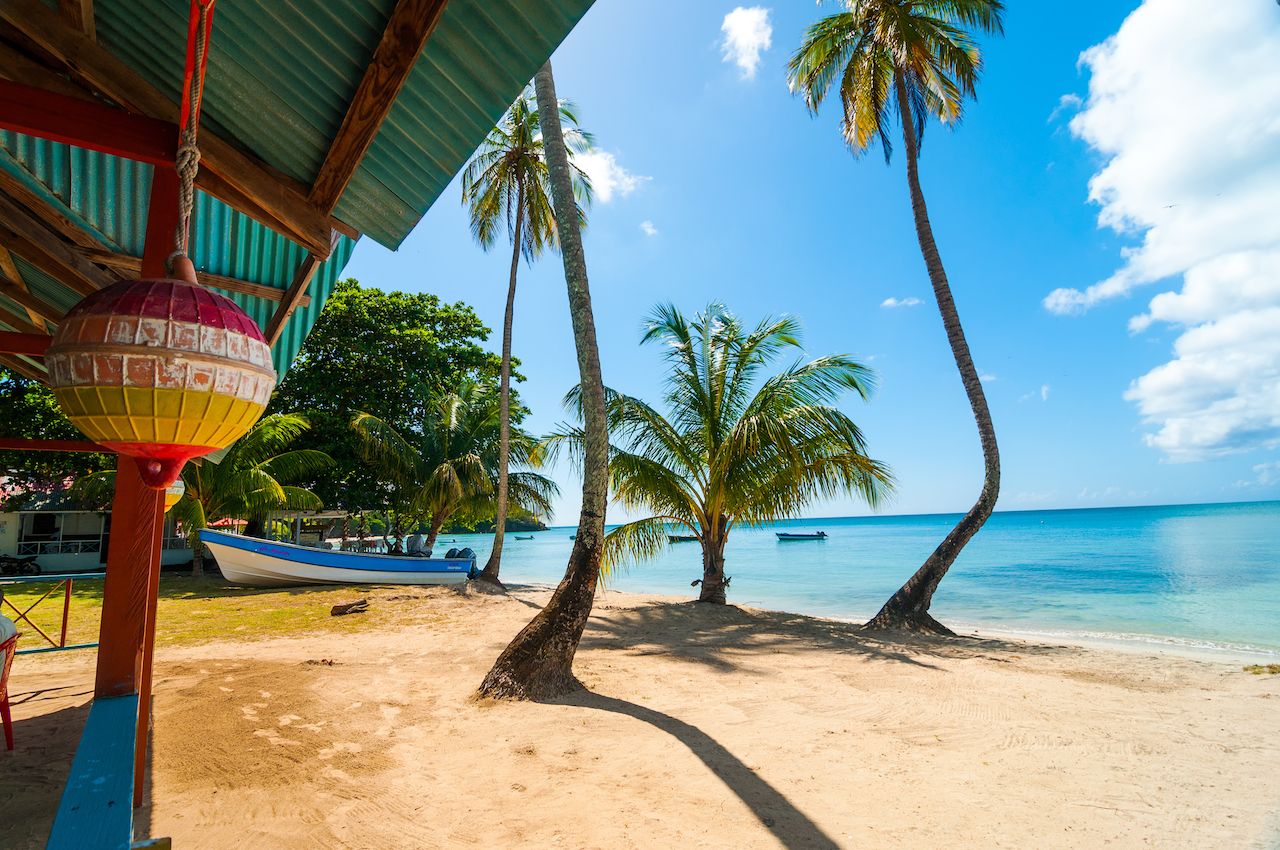 Collectively, San Andrés, Providencia, and Santa Catalina are home to over 40 world-class diving sites with manta rays, coral reefs, and visibility up to 30 meters (98 feet). These sites are protected by the UNESCO Seaflower Biosphere Reserve. Onshore, the archipelago’s pure white-sand beaches line what’s known as the “sea of seven colors,” named as such because of the twinkles of lilacs, greens, and blues that reflect under open sunlight. You can hit the water to kite or windsurf, do a bit of swimming, hop on a jet ski, or even sail. Off the beach, be sure to visit the Coral Palace, the Botanical Gardens, and Spratt Way, a scenic 1,800-meter (1.1-mile) footpath from the airport to the hotel area nearby.

Culture13 of the Most Underrated UNESCO Sites You Need To Visit
Tagged
Beaches and Islands Insider Guides
What did you think of this story?
Meh
Good
Awesome