Warsaw likely isn’t the first European city topping your bucket list. You’re probably more keen to gorge on pasta in Rome, gaze upon precious artworks at the Louvre in Paris, or party the night away at the clubs in Berlin. But most people don’t realize that in the heart of Eastern Europe, Poland’s capital has all the food, art, culture and nightlife you crave — just without the throngs of tourists and exorbitant prices. You’ll also find stunning castles juxtaposed against impressive modern architecture, hear an array of languages spoken by both young and old, and interact with a diverse population that’ll make you feel welcome in their home. Here are 10 more reasons why Warsaw is the most underrated city in Europe. 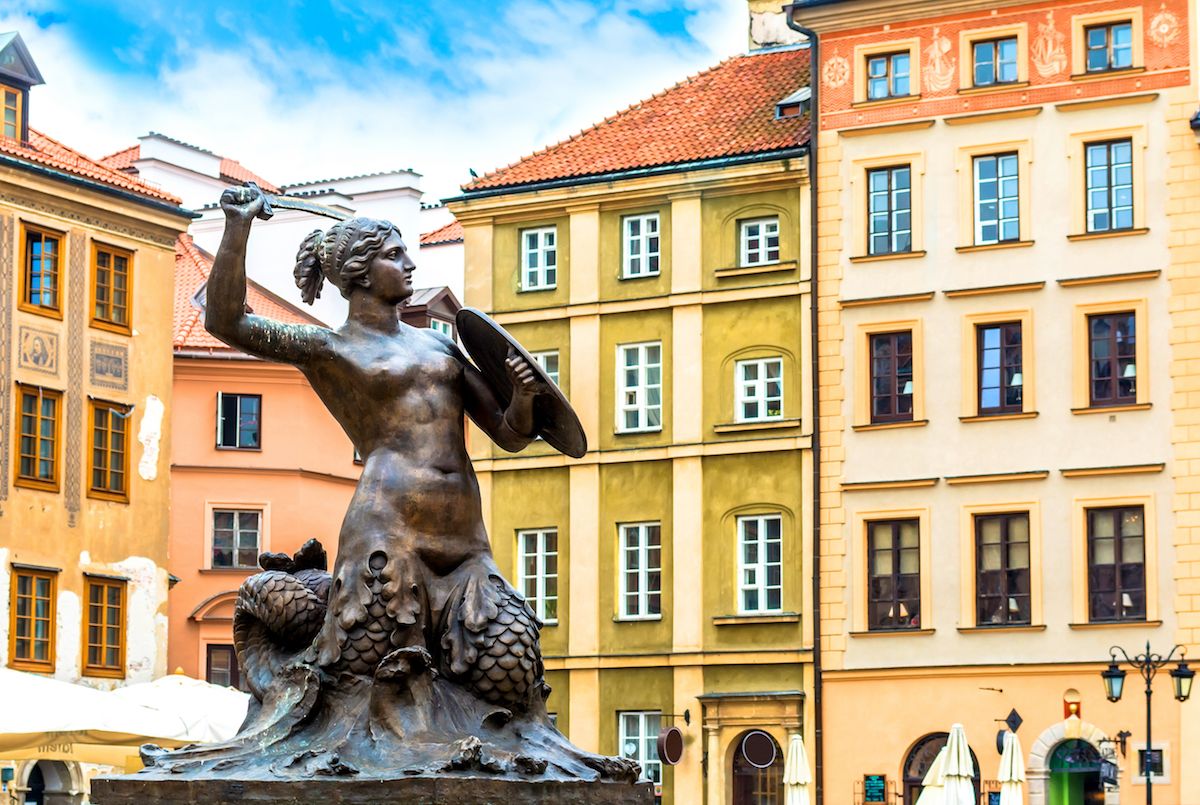 Warsaw’s Old Town is one of the city’s top highlights. Besides being the place locals choose for their dates, evening strolls, or dinner, its architecture made up of cobblestone streets and medieval buildings reflect the pain the city went through during World War II. The Royal Castle dominates the area, and you can visit every day with a purchased ticket (or for free on Sundays) and also stop by the Barbican, one of Warsaw’s oldest buildings, nearby. Old Town is the place to get traditional scoop ice cream in dozens of flavors, or to enjoy a fine meal in the outdoor seating areas and gardens. To get the best view of the historic architecture, be sure to climb the tower at St. Anne’s Church.

When leaving Old Town, you find yourself on Nowy Swiat (New World), a wide street filled with gift shops, restaurants, stores, churches, and the Presidential Palace. Many choose to dine here and eat right on the street, while others do their shopping or attend university. University of Warsaw has its campus here, with many of its buildings spread out along the street. As you walk down New World, you can bump into students from all over the world, as well as local families and even the occasional celebrity. New World is the place to catch a bus, reach the metro, or ride your bike right along the street. The street is usually closed off to traffic on the weekends. 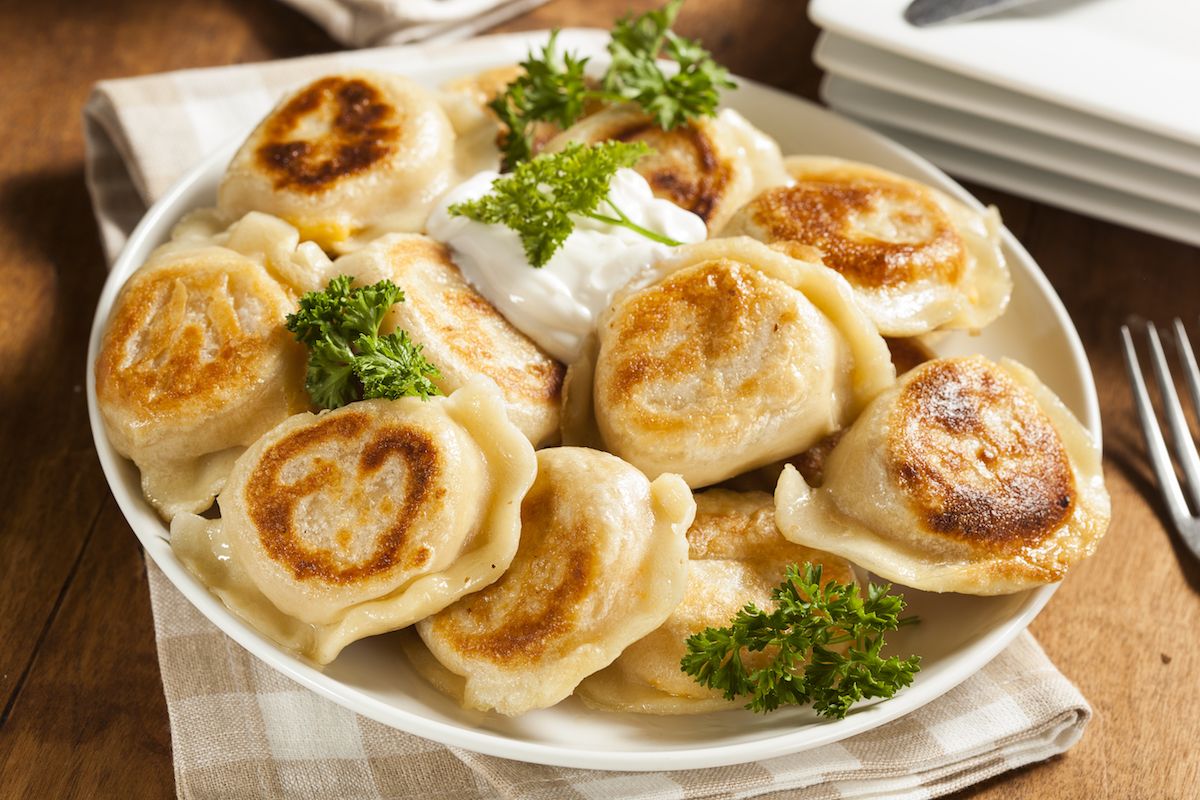 3. The cuisine is divine

Polish food is mainly composed of meat, potatoes, fresh garden vegetables and grains, with traditional dishes ranging from stuffed cabbage rolls to pierogies; it’s basically the ultimate comfort food. Traditional dishes include potato pancakes with meat-based goulash or with mushroom sauce, white borscht served with bread, sausage and hard-boiled eggs, or potato and cheese perogies fried with a side of onions and served in a cast iron skillet. Gluten-free or vegetarian travelers will also be pleasantly surprised by how many options they have in the city. One of the best spots to sample this cuisine is at the restaurant Zapiecek, with a few locations around Old Town. Another restaurant worth visiting is Manekin, famous for its blintzes and pancakes, with both savory and sweet fillings or toppings.

4. Public transportation can get you anywhere

Warsaw has just two metro lines, with one being opened just a few years ago, but it has hundreds of buses and trams that can get you around the city and beyond. Its Central Railroad Station is where you’ll go when transferring to a different city. Tickets can be purchased in vending machines on the streets using credit cards or cash, and different options are available, such as weekend tickets, single tickets, half-price tickets (for students and seniors with valid IDs). When visiting the metro stations, you’ll be surprised to find that the underground is like another city, filled with bookstores, bakeries, services and shops. Nothing like a fresh danish with the morning paper to start off your day. 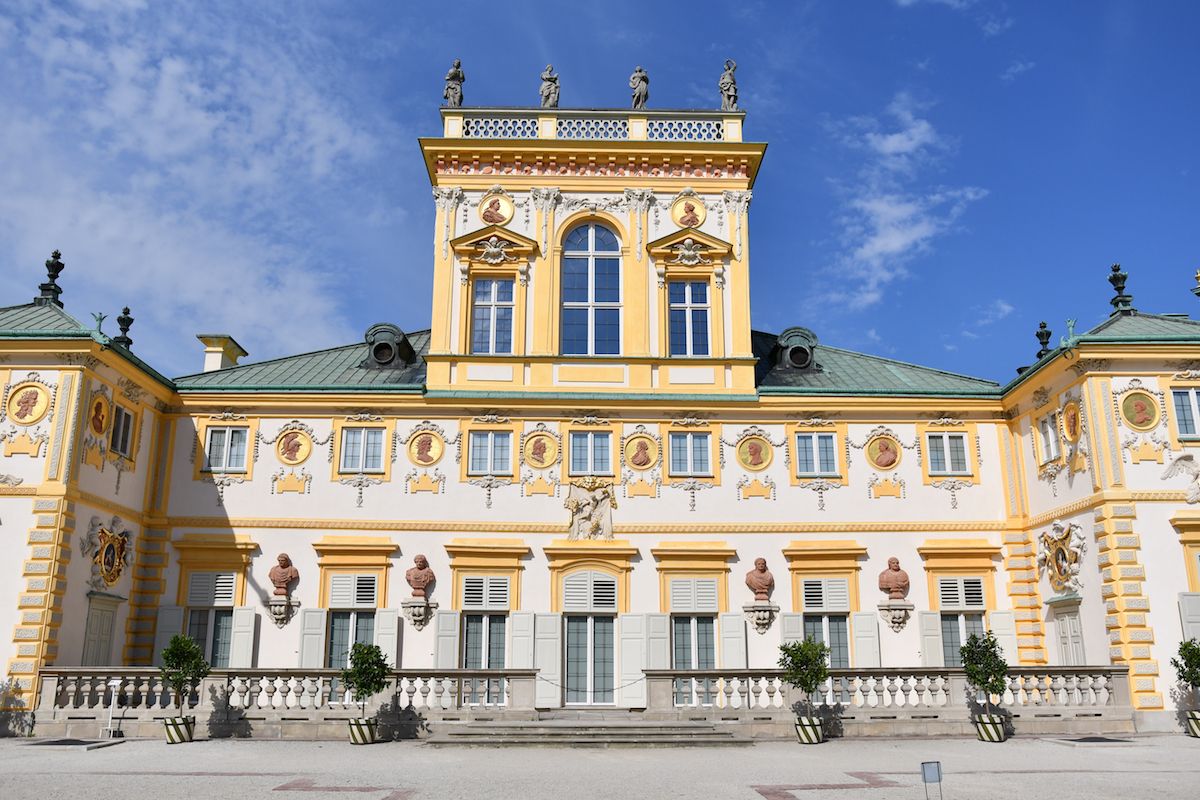 5. Warsaw is filled with museums

There are so many museums in Warsaw, it’s hard to visit them all. Besides the Royal Castle in Old Town, there is another Royal Palace in Wilanow, a small district in Warsaw just a bus ride away from the center. Wilanow Park, with its baroque architecture and royal gardens, should also be on your itinerary. Other museums include the Warsaw Uprising Museum and POLIN Museum of the History of Polish Jews. These museums show the difficulties Warsaw went through during and after both World Wars.

6. The skyline is changing but beautiful

Warsaw had one skyscraper, the Palace of Culture and Science, built in the city center in 1955 (which you can visit to see the newest exhibits and get a rooftop view of the city). These days, the skyline is drastically changing with modern apartment and office buildings rising at an extremely rapid pace. If you happen to stay at one of the hotels in the city’s center, perhaps you’ll get a breathtaking view of the city, but another option is to visit the Palace mentioned above, or visit Marriott Hotel’s Panorama Sky Bar. If you’re not a fan of the modern, a lot of the historic architecture can be seen in and around Old Town, such as in the Theatre District or in the area known as New Town. 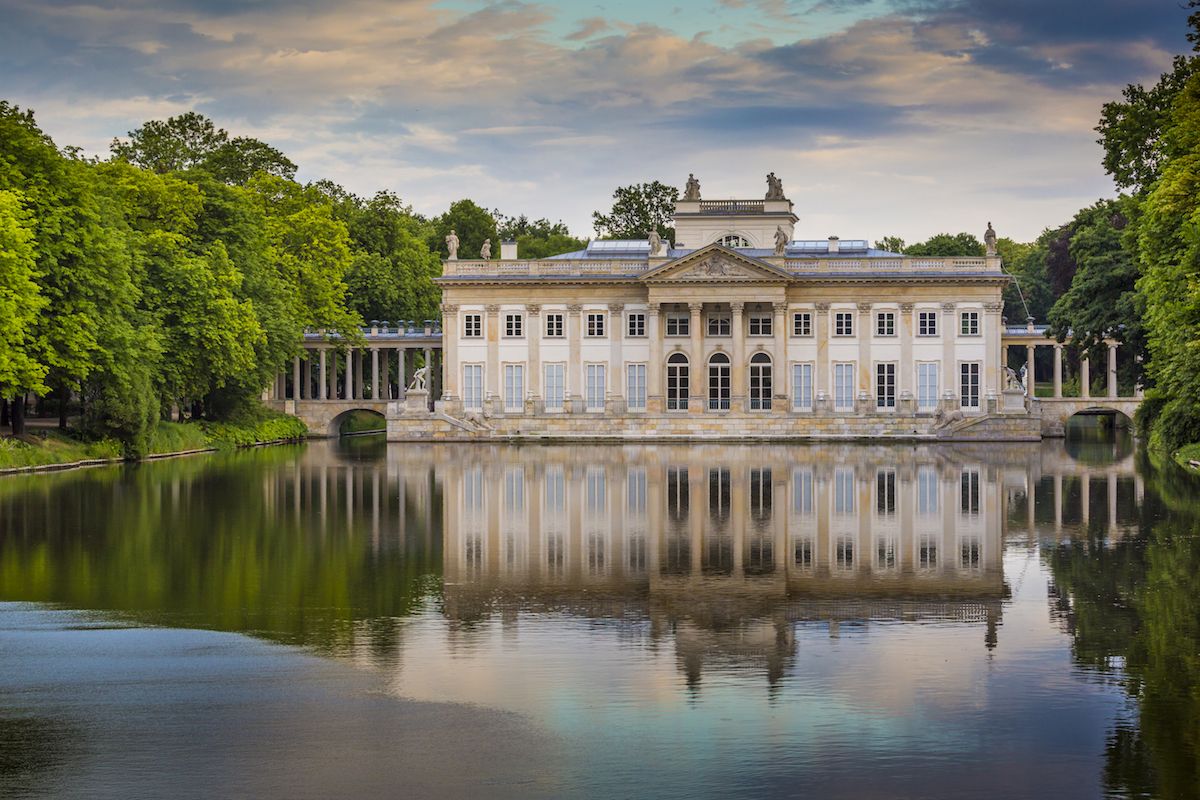 7. There’s so many serene parks

Warsaw is very green with its many parks located all around the city. The most famous is the Lazienki Krolewskie park, featuring the Lazienki Palace, the famous Chopin statue, and peacocks. You can hear the peacocks all around the park and if lucky, you can see them opening their beautiful tails. Another park is Ujazdowski, right across the street from Lazienki. The park is located on a gorgeous street that houses many of the world’s embassies. Right around the corner from the Old Town are the Saxon Gardens, another place of green that is home to many festivals and events.

8. There’s even a small beach

The Vistula river flows through Warsaw, and on one side of it is a pleasant walkway for pedestrians and cyclists with numerous benches and bars, while on the other is a small beach. You can reach it by traveling across one of Warsaw’s bridges by bus or tram, or you can take the free ferry which leaves every 30 minutes, right on the walkway. On the beach, there’s a bar called La Playa, which has a tropical vibe with palm trees, cocktails and dancing, or you can sunbathe right on the sand and take in the city’s skyline.

9. Then there’s the nightlife

Warsaw is pretty quiet and dark at night. Its skyscrapers turn off their lights at midnight, and most restaurants around the city center are closed by then. But right off Swietokrzyska Street, bars and pubs remain open until morning, featuring European disco music, endless beer, free welcome drinks and dancing. Anyone who went to a Polish wedding knows that at midnight is when the fun begins, and the night only really ends when it’s literally morning. 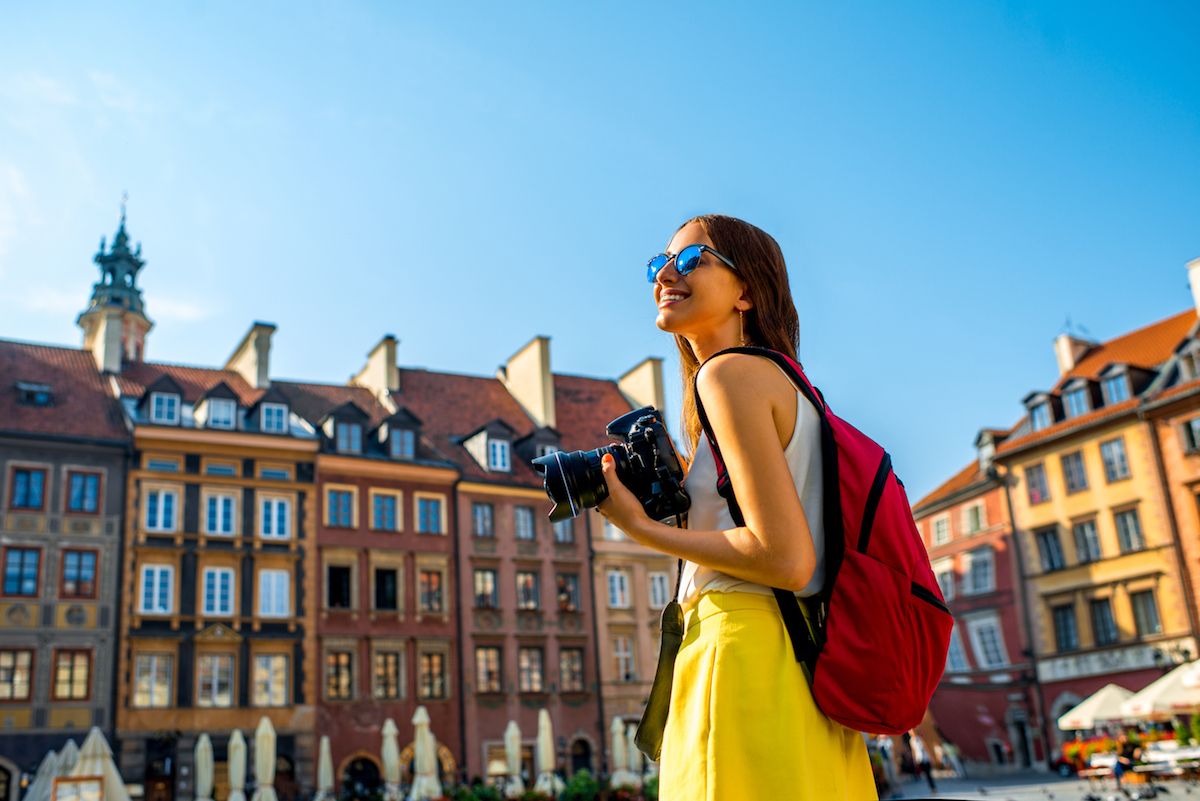 10. The city allows you to shape your experience

Warsaw doesn’t demand you follow a strict itinerary or check off a list of sites before you can claim to have really “seen it.” You’ve seen Warsaw once you’ve done whatever it is you fancy, whether that’s laying into a plate of pierogies and chasing it down with a beer, going on your own walking tour of the city’s magnificent architecture, or just dancing with strangers at the disco at night. There’s no right way to do Warsaw; there’s no “best time” of the year to visit. No matter what you decide to do, you’ll feel at home.

Student Work7 Signs This Is Your First Time in Warsaw
Tagged
Culture Insider Guides
What did you think of this story?
Meh
Good
Awesome