Months after an undersea volcano erupted on August 12, 2021, huge amounts of pumice have appeared around Japan’s southernmost coastlines.

The active Fukutoku-okanoba submarine volcano is located about 80 feet under the surface of the Pacific Ocean and 621 miles south of Tokyo. One of NASA’s satellites captured an image of the unusually large huge plume of gas and steam that extended 11 miles up into the air. Several Philippines Airlines flights were cancelled to keep ash from damaging the aircrafts’ jet engines. It was an impressive feat of nature and a little disruptive.

But the story of Fukutoku-okanoba doesn’t stop there. 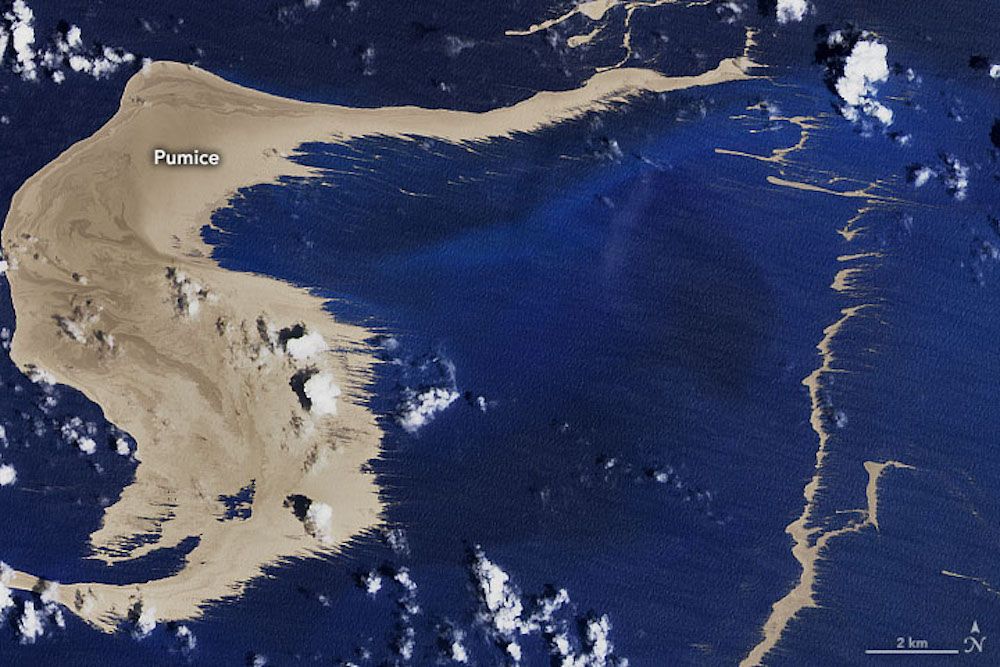 On August 17, another satellite image showed vast rafts of pumice floating around the caldera of the volcano. And they kept floating until, in late October, they showed up on Japan’s coastlines.

According to the Global Volcanism Program, the pumice arrived first at Kitadaito Island on October 8 and later made its way to the Okinawa Prefecture, as well as several ports in the Kagoshima prefecture on the southern part of island of Kyushu.

Pumice is a very porous rock that’s formed during explosive volcanic eruptions. Pumice floats on water, and according to NASA’s Earth Observatory, “Rafts of the rock can drift in the ocean for months or even years.”

The tons of floating pumice from Fukutoku-okanoba has wrecked havoc every where it’s drifted. It’s clogged harbors and beaches, killed marine wildlife, damaged boats and engines, and severely disrupted the fishing industry, The Guardian reports.

Photos taken by Síle Nic Chormaic, an Irish Physicist living in Japan, show the extent of the pumice invasion.

Chormaic also captured a video of her running her hand through the unbelievably thick layer of pumice in the water.

Local authorities have started clearing the tens of tons of pumice with diggers. The clean-up operation is expected to take weeks.

Beaches and IslandsThese Inside Photos Show Hawai’i’s Latest Volcanic Eruption Up Close
Tagged
News Outdoor Japan
What did you think of this story?
Meh
Good
Awesome