The first summer after I moved to America, my now-husband Charles and I drove a lot. They were not the kind of road trips through lonely country roads and breathtaking landscapes I’d seen in movies. Most of the time, we shuffled between Westchester County and Central Jersey. On weekends, the roads were heavy with “shore traffic” as hundreds of cars rolled bumper to bumper, anxiously and angrily trying to merge along six lanes of highway, their shapes slightly distorted in the heat.

That’s how I came to know American car culture: mundane and highly practical. But those trips weren’t without surprises and discoveries. One day on our way to Island Beach, Charles spotted a red sign on the side of the road. “Oh there’s a Wawa,” he said, sounding slightly excited. “It’s a South Jersey thing.”

He went on to explain that Wawa was a convenience chain popular in Pennsylvania and New Jersey. It sold gas too, he said, and had more food options than an average highway pit shop. That, as I later found out, was an understatement.

Wawa takes the gas station convenience store formula to the next level with made-to-order lattes, freshly packaged fruits and salads, and custom sandwiches ordered off of touch screens. The model proved to be successful and it’s no longer only a Pennsylvania and New Jersey thing. Today, Wawa has more than 850 East Coast stores in six states and Washington DC.

Charles, who spent his teenage years in South Jersey, remembers the Wawa at Princeton Junction as a place for “cheap, reliable sandwiches.” Other New Jerseyans, however, feel more strongly about the chain. I now live in a North Jersey town where it’s not uncommon to come across transplants from other parts of the state, and I recently asked in a neighborhood Facebook Group what people thought of the store. The comments, more than 70 of them overnight, were unanimously laudatory (“Wawa is the BEST!!!”) and surprisingly emotional (“I grew up on their Mac and cheese and hoagies.”) At least three people wrote, “Wawa is life!”

Clearly the people in this Facebook Group aren’t alone. The parking lot of a nearby Wawa was busy when we recently stopped for lunch. Cars were constantly coming in and out of the gas station canopy, carefully steering clear of shoppers haphazardly balancing many sandwiches and drinks in their arms.

The storefront was big and assertive, the bright red “Wawa” logo even more imposing up close than when seen from the highway. Inside the store, the beige-toned decor was unassuming, but the selection made it stand out from being just another convenience store. There were the same racks of snacks, fridges of soda, and thermoses of coffee, but the selection was more varied, and the vibes more energetic. It was almost cheerful. People fussed with cream and sugar at the coffee station, flipped open the acrylic lids of the pasty cases, and poked at the salad bowls and yogurt cups in the central island. They wore shorts and flip flops. They were tanned and sunburned. And they didn’t seem to mind spending some time in a roadside convenience store.

But what really caught my attention was the sandwich-ordering kiosks. I could have spent forever swapping the cheese and adding a condiment if it were not for the line behind us. I don’t remember what I got that day, except that it was meaty, saucy, and cheesy. When I unwrapped it in the car later, the cheese had melted into the toasted bread, which itself was half soaked in sauce and grease. It was messy and savory. Not gourmet food, but fun to eat and special in its own way. 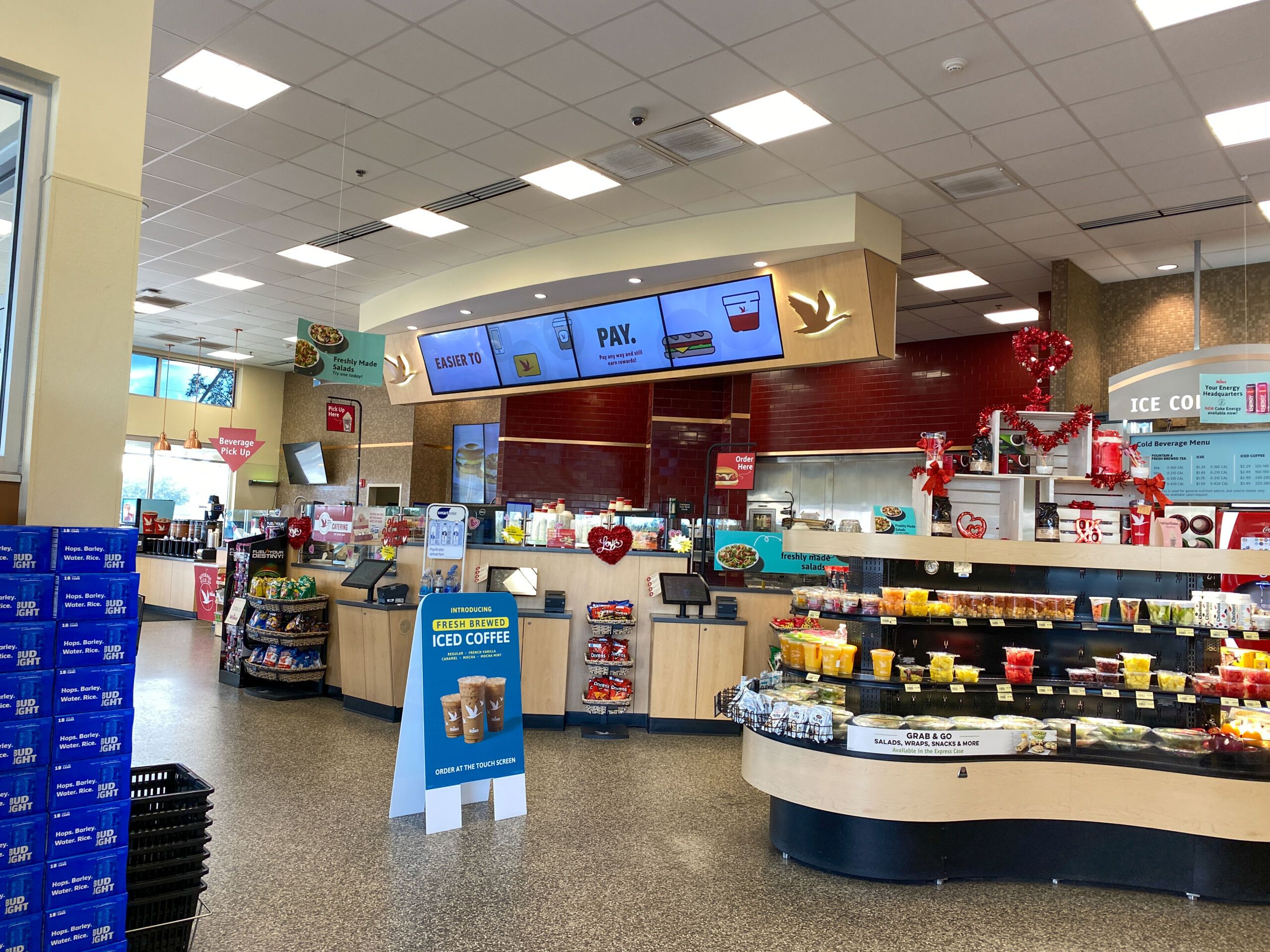 Good road trip food is about making the most of what’s available. It doesn’t need to be gourmet, but does have to be good enough to have something to look forward to after hours of staring at car butts and interstate signs. When I asked on Reddit what people’s go-to Wawa orders were, some answers were surprisingly involved. “Chicken cheesesteak, salt, pepper, ketchup, American cheese, get it as a special order and then ask them to toast the roll, build the sandwich with the cheese on last and toast the whole thing again,” one user wrote. “Chicken strip shorti with garlic aioli, extra honey mustard, cheddar cheese, lettuce, onion, everything seasoning, and parmesan cheese,” another said.

My Wawa orders are usually much simpler. For me, knowing my stores means having a routine, which alleviates my still-persisting anxieties about the many uncertainties on the road. I like to pack an Italian hoagie for long rides. The salty ham, mild provolone cheese, vinegar-soaked lettuce, and zesty jalapeño bits taste just as good at room temperature after the sandwich has sat until a good time to eat it as the combination does when it’s freshly assembled. There’s usually coffee, too — a black light roast in the morning and maybe a cold, milky, and indulgent espresso drink later in the day if the traffic is bad. Two hours in, I often tear open a bag of beef jerky or munch on an apple. Not because I’m hungry but because I’m bored. That said, variations are welcome, and there’s much to choose from. I enjoy the occasional doughnuts with sugar glaze — similar to my first donut ever, eaten ages ago in the parking lot of a strip mall — or the berry-flavored ice cream that reminds me of the cake frostings I loved as a kid.

Maybe that’s why people speak of Wawa so emotionally and passionately. It evokes memories of inexpensive coffees on morning commutes, late-night food when the cravings hit, and car picnics during summer trips — small things we do many times and never think too much about, but occasionally reminisce about. I now live in a dense urban area, quite far from the nearest Wawa. But the store, almost always against a backdrop of interstates and highway billboards, is forever associated with my first years as a young immigrant, slightly disoriented yet immensely curious, intrepidly taking in everything about this American life.

May 31, 2022 Aryana Azari
✖
travelstoke
Download the mobile app
stoked by