The state of Puebla gets less attention from tourists than Quintana Roo, Baja California Sur, or Oaxaca. However, located just south of Mexico City in the center of the country, Puebla should be on every travelers list for its food (the birthplace of mole poblano), its architecture, and it’s pre-Hispanic history.

Puebla is full of destination-worthy and picturesque towns to visit regardless of what you’re looking to experience. Here’s where to go whether it’s your first trip or thousandth. 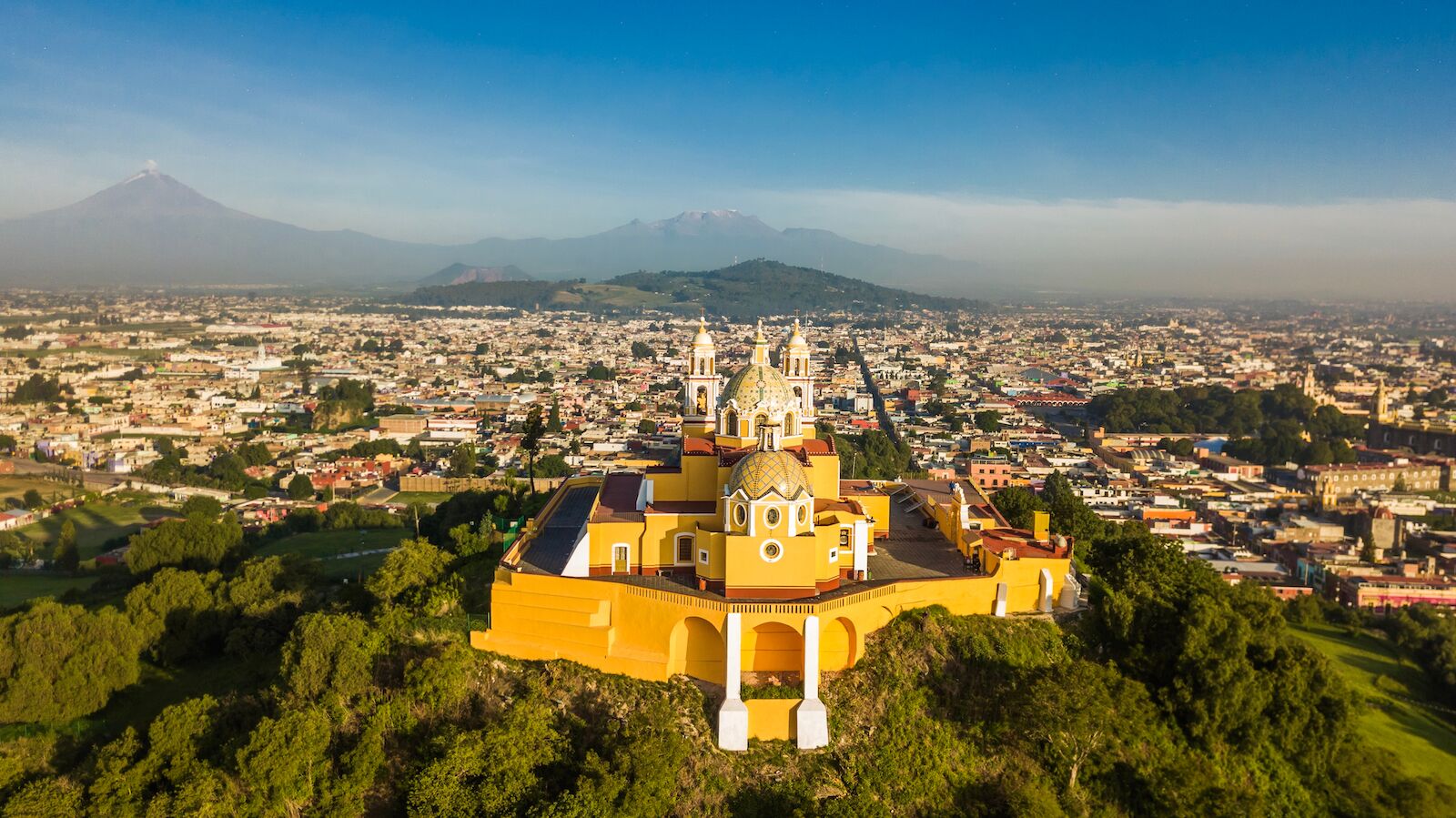 Cholula is located on the outskirts of the city of Puebla and is not only one of the most picturesque towns in Mexico, it is also one of the places with the most history in the entire continent. This place has been continuously inhabited for more than 2,500 years. A visit to Cholula begins with the greatest of its attractions: Tlachihualtepetl, or the Great Pyramid of Cholula, is the largest pyramid ever built. Access to the archaeological site only costs 70 pesos (about $3.50) and the same ticket grants you entry to the site museum and to the tunnels that go deep inside this monumental structure.

Above the pyramid is the Sanctuary of Nuestra Señora de los Remedios and a viewpoint from which you can admire the whole city. From here, you’ll have a privileged view of the volcanoes Iztaccihuatl and Popocatepetl. You’ll also be able to admire one of the distinctive characteristics of Cholula: the city has so many churches that people commonly say there’s one for each day of the year. Once you’re back at street level, head towards Plaza de la Concordia, the town center, and go to the Ex-Convent of San Gabriel, an impressive 16th-century construction, or to the church of Santa María Tonantzintla, which probably the most colorful Catholic temple you’ll ever see.

If you want to get away to the center of Puebla, you can do it through the Puebla-Cholula Tourist Train. The train station is next to the pyramid and you can board it with your bike.

When to visit Cholula: The festival of the Virgen de los Remedios is the most important festival in Cholula and takes place in the first week of September. Another good time to visit Cholula is during the vaniloquy (a concert in which the bells from all the town’s churches participate) which is held every November. 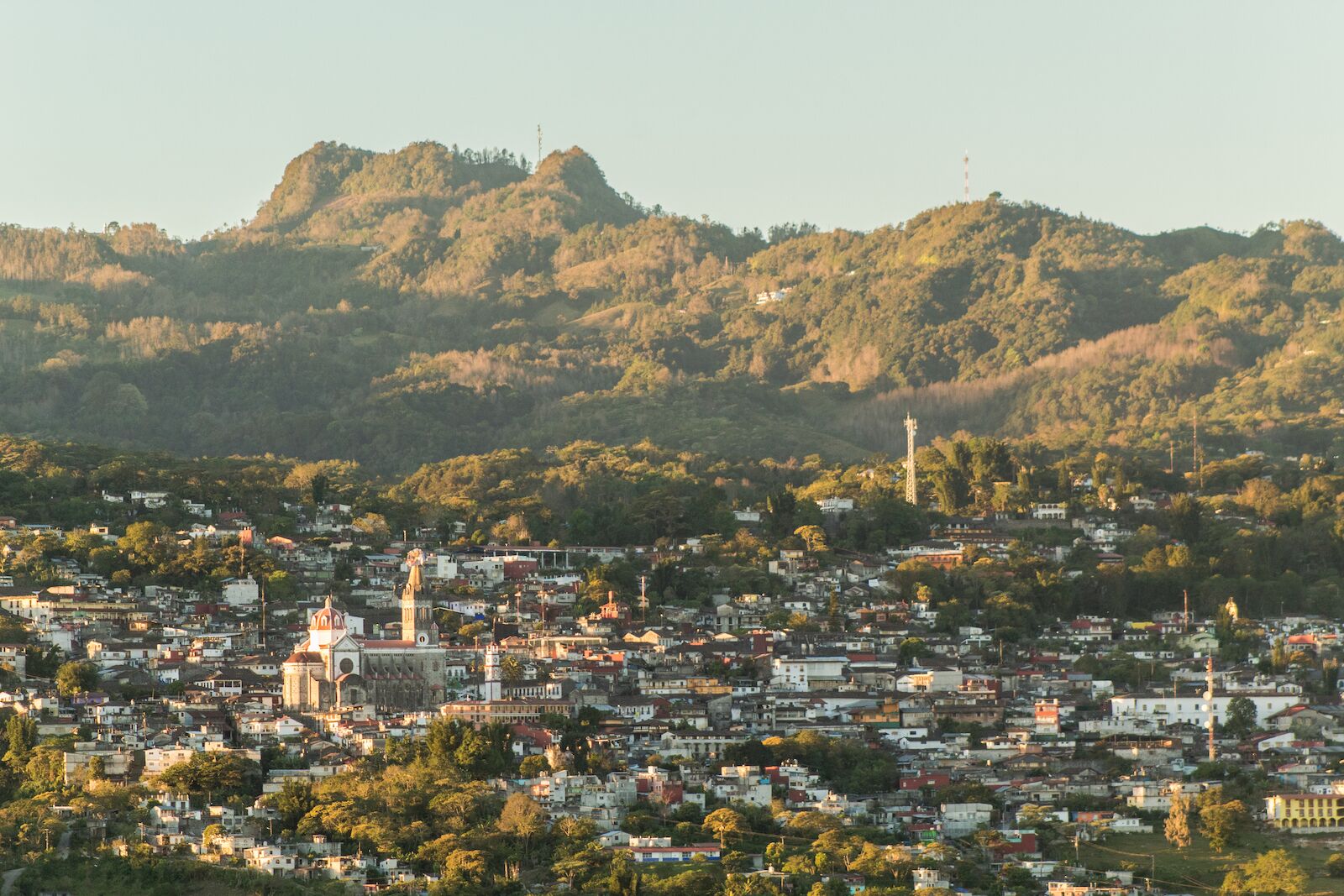 Cuetzalan is tucked in the misty mountain tops of the Sierra Norte de Puebla. This small town of white houses with red tiles and cobblestone streets is a good spot to experience the Indigenous culture that still prevails in the central areas of Mexico. Walking through Cuetzalan on market day (the main flea market takes place every Sunday) is a true journey through time. Men and women dress in their traditional white attires to buy and exchange local products that range from wild herbs and mushrooms to tlayoyos (a corn cake stuffed with split peas and avocado leaves) and the famous Yolixpa (an alcoholic drink with medicinal properties that is prepared with more than twenty different herbs).

The Cuetzalan main square houses the impressive temple of San Francisco de Asís. Its tower is about 230 feet tall, which makes it the tallest church in the state that’s only rivaled in size by the gigantic pole that stands in the center of its atrium. This pole is used to perform the ritual dance of the flying men, which some people think originated in this town. If you want to know more about the Indigenous history of the region, visit the Calmahuistic Ethnographic Museum inside the House of Culture, as well as the archaeological zone of Yohualichan, less than half an hour away from Cuetzalan.

When to visit Cuetzalan: The best time to visit Cuetzalan is during the festival of San Francisco de Asís in the first days of October. The identity of the town and its surrounding regions becomes even more present during these festivities full of music, dance, and shows. The festival also hosts the National Huipil Fair, a celebration of Indigenous identity through its traditional garments. 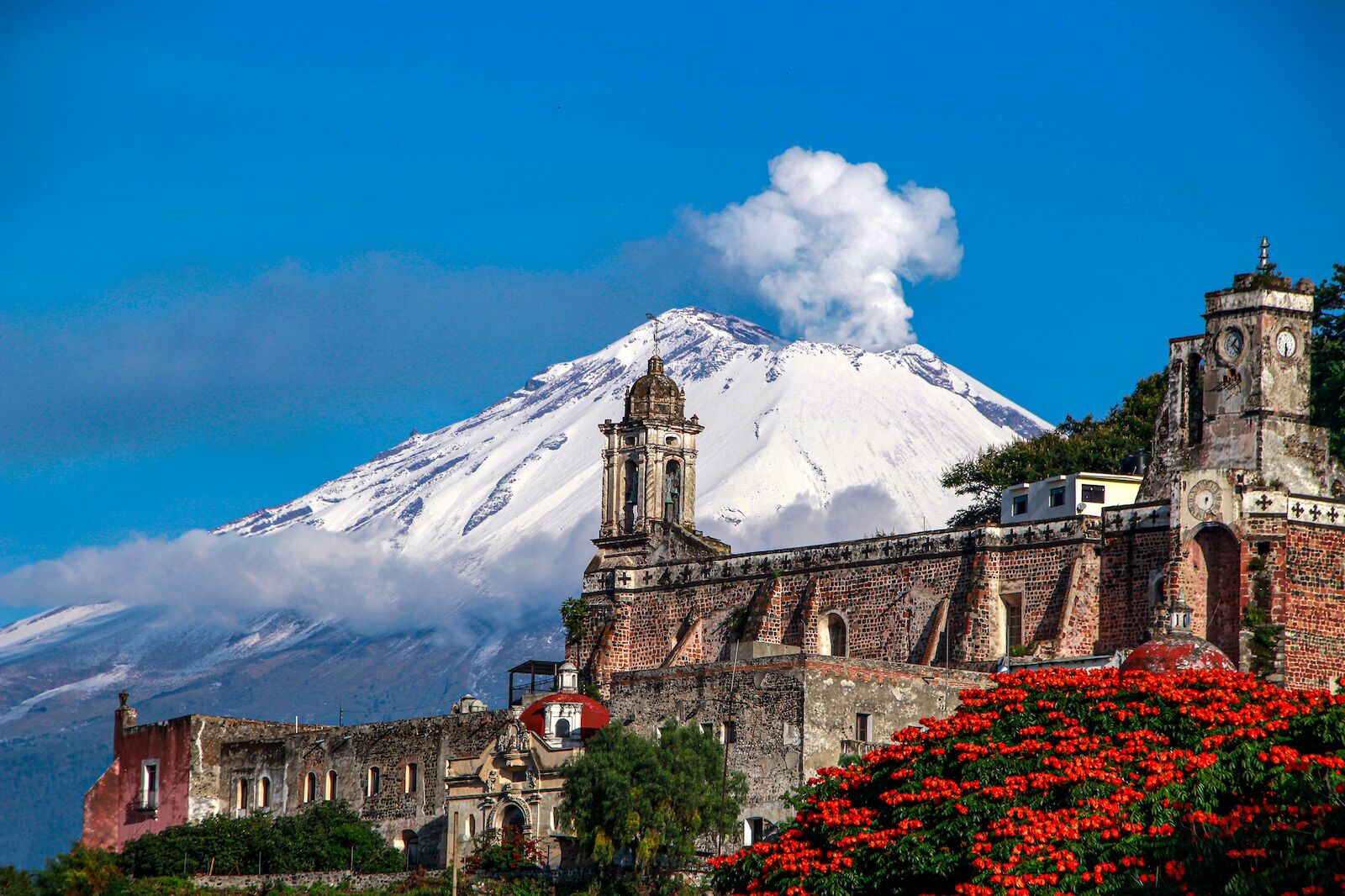 Atlixco, the City of Flowers, is one of the closest inhabited regions to the foothill of the Popocatepetl volcano and is a place where local identity is continuously celebrated. The nickname comes from the production of flowers and ornamental plants. Flora is the most important economic activity in the town since the 16th century, when Atlixco was called The Barn of New Spain. The center of Atlixco is full of striking colors and Moorish-influenced buildings that make it one of the most colorful towns in Mexico.

Start exploring Atlixco from the main plaza. The ice cream stalls found in and around the square seem ordinary, but they are famous for flavors such as grasshopper, rosemary, VapoRub, and chile en nogada (chiles in walnut sauce). You can find the latter during the months of August and September in artisanal ice cream parlors such as Ximitl. From the main plaza, walk down Avenida Hidalgo until you reach the clock. From here, you can go up to the viewpoints of Cerro de San Miguel, from where you’ll have an impressive view of Atlixco and one of the best views of Popocatepetl. On your way up you will come across the Temple of San Francisco, an impressive Franciscan construction from the 16th century.

When to visit Atlixco: If you visit Atlixco near the end of September, you’ll probably be in time for the Fiesta Grande or Huey Atlixcayotl, a festival in which representatives of the 11 regions of Puebla come together to celebrate their identity with dance, food, and music. It’s similar to what happens in the neighboring state of Oaxaca during Guelaguetza, but without the crowds that attend the better-known Oaxacan festival. Atlixco also celebrates a Fiesta Chica (Small Party), or Atlixcayotontli, in early September. During the holidays, Atlixco shines with a show of lights and decorations that transform the town center into a Christmas village. 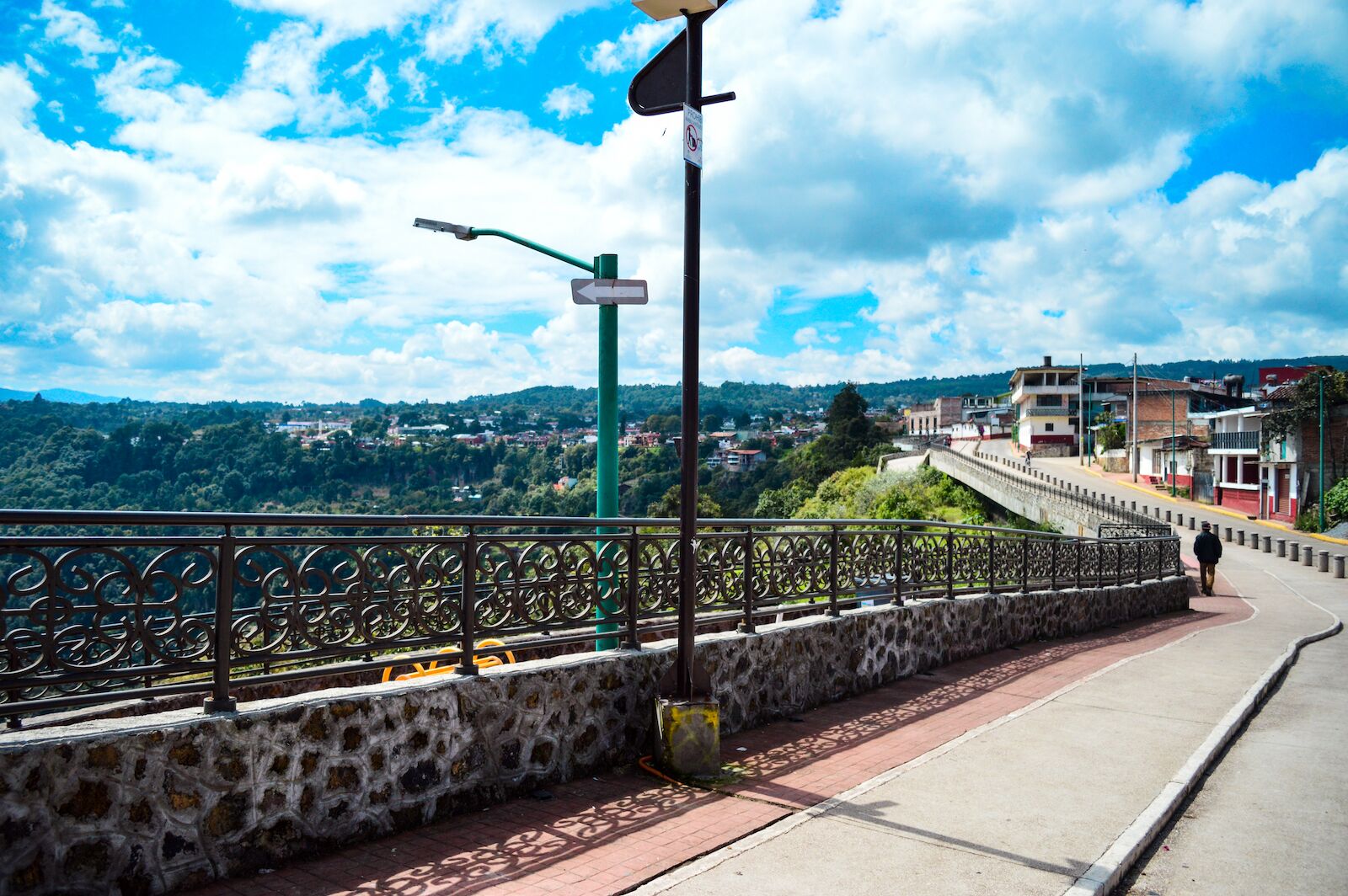 The Sierra Norte de Puebla is a place that adds mysticism to each of its towns, and Zacatlán is no exception. The town is near the edge of a large ravine called Barranca de los Jilgueros, and most afternoons it gets completely covered by a thick fog that completely transforms its looks. The name Zacatlán de las Manzanas comes from colonial times, when the Franciscan missionaries realized how good the region’s climate was for the production of apples. To this day, Zacatlán is the main producer of striped apples in Mexico.

The charm around the squares, temples, and streets of Zacatlán is undeniable, especially when the fog falls and transforms Zacatlan into an enchanted town. But the surroundings have first-class natural attractions. Less than fifteen minutes from the town center there are spectacular waterfalls such as San Pedro and Tulimán, the latter of which has three jumps that together reach nearly a thousand feet, making it one of the most spectacular waterfalls in Mexico. A little farther away are the famous Piedras Encimadas, a valley full of gigantic basalt columns with the most peculiar shapes. Both Tulimán and Piedras Encimadas have trails to explore and tourist infrastructure to enjoy a day in nature.

When to visit Zacatlán: Zacatlán’s biggest festival is the Apple Fair, held each year in mid-August during the festival of the Virgen de la Asunción. This festival has been officially celebrated since 1941 and is one of the most important events in the state of Puebla. Another good opportunity to visit Zacatlán is during the Festival del Pan de Queso (Cheese Bread Festival), which takes place as part of the Day of the Dead celebrations.

Beaches and Islands7 Beaches in Mexico You Should Visit Before Everyone Else Catches On
Tagged
Travel Mexico
What did you think of this story?
Meh
Good
Awesome

The Largest Pyramid in the World Isn't in Egypt. It's in Mexico.

Meet the Skybike, a Bike Zipline High Above a Roaring Waterfall in Mexico