Wildlife photography is an arresting art. It has the power to stop us in our tracks, make us take a step back, and simply say, “Wow.”

Often that bewilderment is followed by a sobering realization: “I could never do that,” so many of us have thought while admiring a professional portrait of a big cat stalking in the savannah. “I can hardly even get a decent shot of my housecat.”

The more confident among us, on the other hand, may feel otherwise. “I could totally do that,” they might think, “if only I had access to expensive equipment and a great big safari park.”

According to award-winning photographer Jens Cullmann, whose image of a crocodile caked in mud recently took first place in the Other Animals category of the German Society for Nature Photography’s Nature Photographer of the Year 2020 contest, neither is true exactly. What it really takes to get a great shot, he says, is time.

To capture the winning crocodile image, Cullmann spent two months in Zimbabwe’s Mana Pools National Park this year, though his commitment to learning about the park and its wildlife traces much farther back. He first visited as a tourist roughly 10 years ago. Taken by the landscape, and the unique opportunity visitors are afforded to pay for a permit that allows them to walk among the animals, he’s been returning for a few weeks or months every year since.

According to Cullmann, appreciating wildlife is key to being a wildlife photographer, but so is understanding a subject and its habitat. “Animals are like humans,” he says. “They have habits. They have their same behaviors that you can read … It’s the same with a landscape photographer. He has to know where the sun is going up or down.”

After a decade, Cullmann knows Mana Pools intimately, from the places in the park different species prefer to hunt to the ways in which the changing climate has affected their behavior. Being able to walk, and shoot, among the animals, he’s also had some intimate interactions.

Cullmann shot this particular crocodile during the end of the last dry season in Zimbabwe. It’s easier to capture wildlife during the dry season, he explains, because animals tend to congregate around the remaining watering holes, and all the tall grass is cleared out. 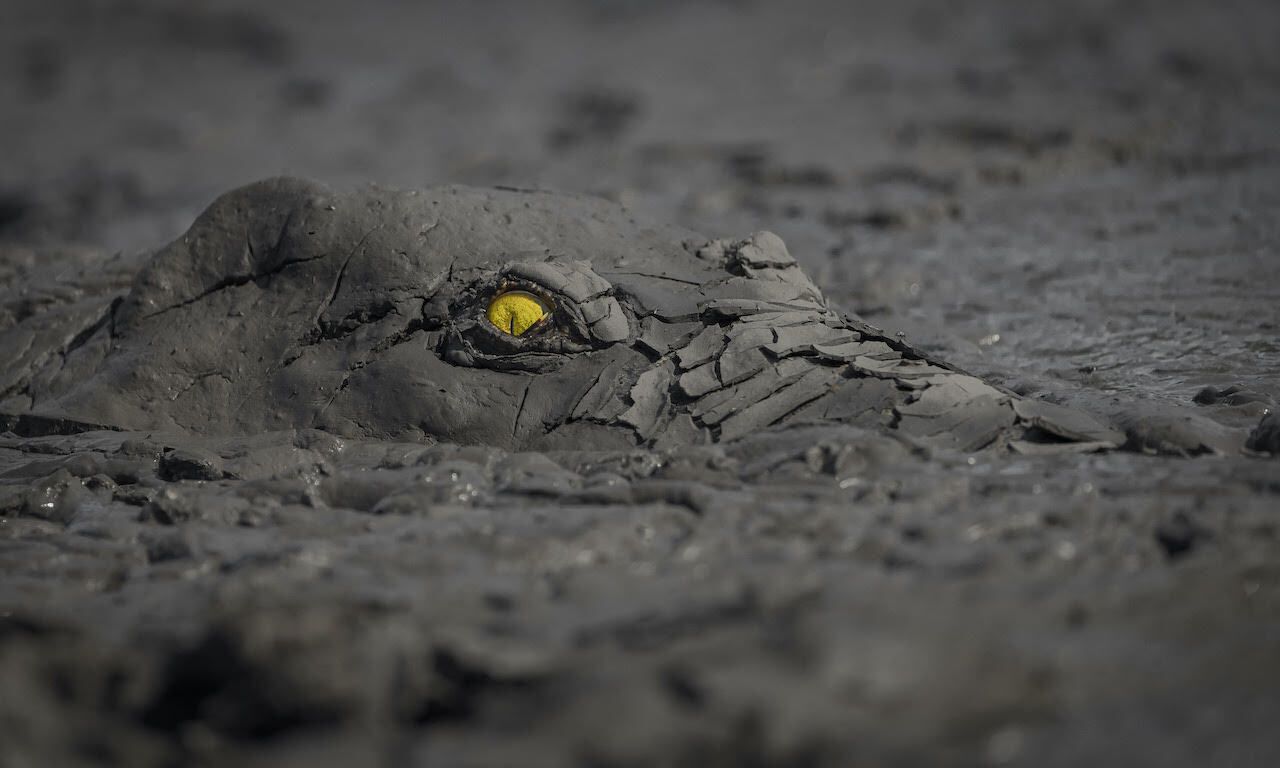 As a subject, this crocodile was particularly cooperative, remaining relatively still as Cullmann worked his camera from 20 or so feet away.

On other occasions, the photographer maintained less distance. As this year’s dry season was particularly hot and sun-baked, many of the park’s animals were left weak and vulnerable. Often, they found themselves stuck in mud and in need of assistance. 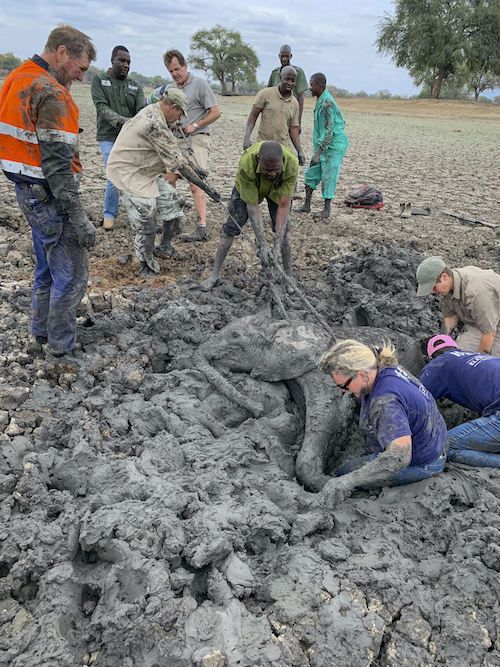 Cullmann has a number of such memories: he and his friend aiding a couple of female kudu, park employees unearthing a skinny young elephant. Once, Cullmann tried saving a monkey that was not only stuck but also being eyed from behind by a hippopotamus.

“At first I tried to chase the hippo away,” he says. “Then I went back with a stick and tried to rescue the monkey, but the hippo came and ran after me.” This he remembers as one of his more alarming experiences being up close with the wildlife. 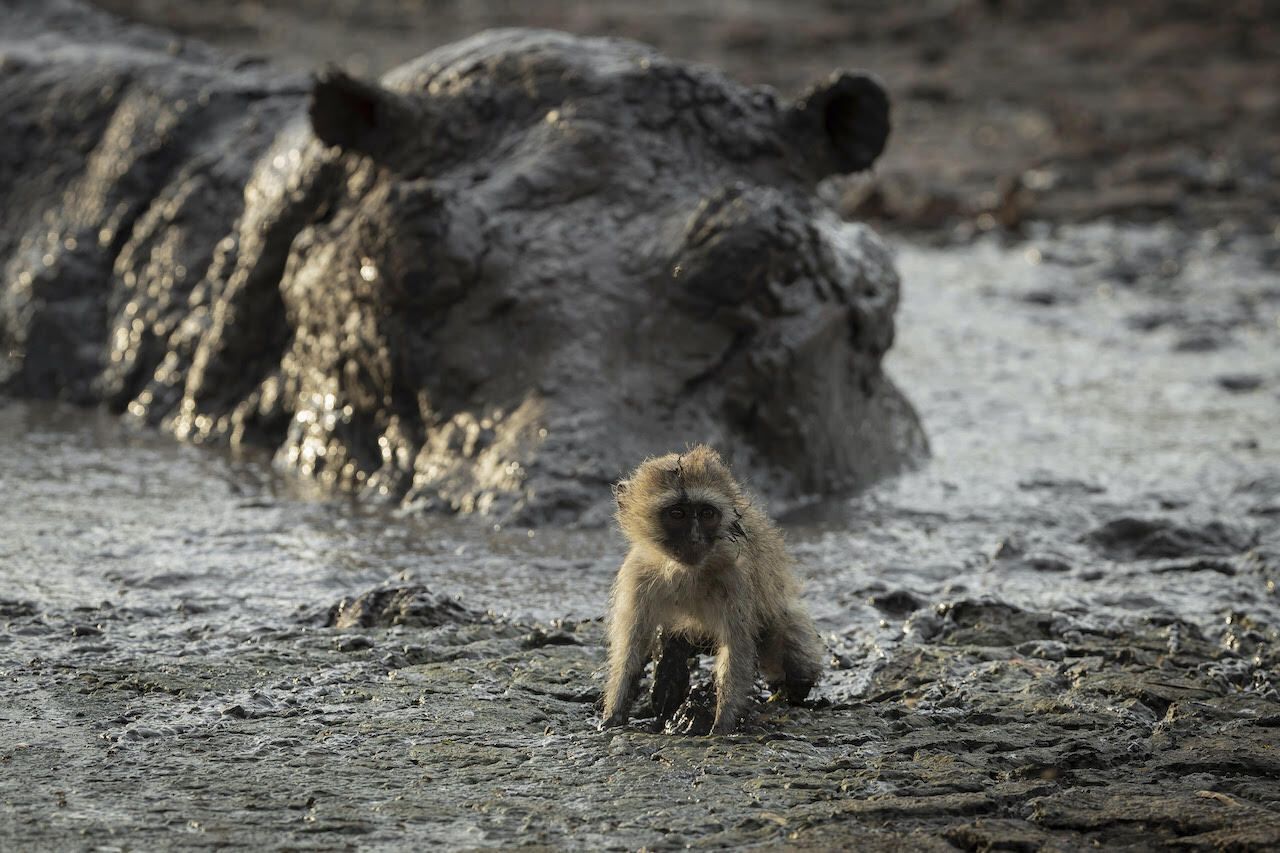 Along with patience and perseverance, it would then seem, professional wildlife photographers might also need a little courage, particularly if they’re on foot in a safari park.

Though Cullmann acknowledges the risks of walking freely among lions, hippos, and other fierce species, despite his knowledge of their behaviors and habitats, using proper equipment can help wildlife photographers maintain a safe distance and get an award-winning shot.

Cullmann shoots with a Canon EOS-1D X with a powerful zoom lens. Though he does not consider himself an expert in all things cameras, he does note that this is a popular model for wildlife photographers, whose lens of choice is an important complement to their own talent.

“I mean, the eye of the photographer [is essential] to get the right frame or to get the picture to tell a story,” he says, “but the camera should be not too bad as well.”

As for all those self-doubting, or perhaps overly confident, admirers of images like Cullmann’s, one of the most important things any aspiring wildlife photographer can do is get acquainted with their craft and equipment, whatever camera that may be. Practice on your pets, play around with your settings, and, most importantly, Cullmann says, actually read your camera’s manual.

NewsThe Winning Shots of the 2020 BigPicture Natural World Photography Competition Will Take Your Breath Away
Tagged
Interviews Wildlife
What did you think of this story?
Meh
Good
Awesome