Every year, tens of thousands of visitors to Africa are jostled about in the back of a Jeep in hopes of spotting the notorious Big Five — lions, Cape buffalo, elephants, rhinos, and leopards — but many overlook the option of seeing animals on foot. Instead of going by car, many tour operators offer walking safaris, a quieter, more intimate way to experience the African wilderness.

While venturing out into the bush without the protection of a vehicle may seem like unnecessary exposure to prowling predators, in reality, safaris on foot are just as safe as in a vehicle. Guides go through extensive wilderness and safety training and are armed wherever a possible threat might lurk. Incidents are few and far between, however, and when they occur, it’s often as a result of tourists’ disregard to guides’ directions.

They’re better for the animals.

Walking safaris are also a less abrasive way to view wildlife. Jeeps crowding around a pride of lions may cause stress or abnormal behavior, or protective elephants may see vehicles inching too close as a threat to their herd. On a walking safari, your guide will make sure you keep a safe and respectful distance from the animals.

A walking safari is a more immersive and rewarding experience.

Exploring the bush by foot also allows you to be an active participant instead of a passive observer. You’re at eye level with the wildlife and have a more authentic feel for life in the bush. Typically, the guide will teach tracking techniques such as identifying different types of scat or prints and give tips, such as never stay downwind of an elephant.

While game drives will give you a better chance of spotting the Big Five, walking safaris will allow you to pick up on details that you’d miss from a Jeep. Instead of going on hour-long drives, a couple of hours of hiking will slow the pace enough to learn about insects, plants, or small mammals. Getting to know the flora and fauna of the bush gives a more holistic understanding of the ecosystem and, therefore, a greater appreciation of the place you are visiting. Going by foot can also allow access to more remote areas that vehicles can’t venture into, such as the rainforests of Madagascar or the less-trodden corners of national parks.

There’s a whole suite of walking-safari options for every kind of traveler. Walking safaris can range between one- and two-hour hikes to multi-day treks, and tour operators usually offer a range of accommodation, from luxury lodges to camping under the stars. So pack your binoculars and sunscreen, and check out these seven great walking safari options for an up-close experience in the African wilderness. 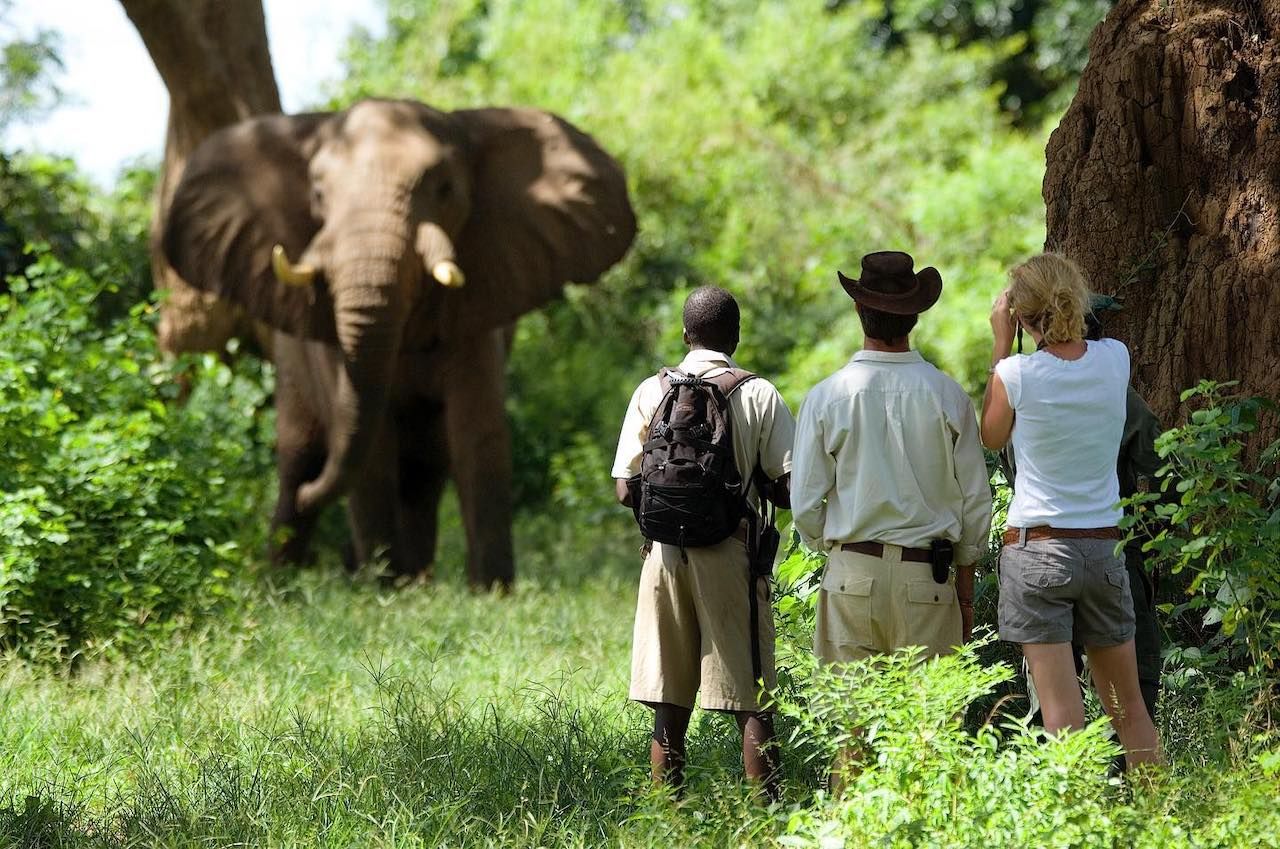 There’s no better way to do a walking safari than with the company that started it all. Norman Carr was a conservationist who pioneered the walking safari in the 1950s as an eco-friendly alternative at a time when most safaris consisted of game hunts. The multi-award winning operator Time and Tide offers an eight-night In Norman’s Footsteps safari where travelers can hike from camp to camp in Zambia’s remote South Luangwa National Park. Accommodation is a range of lodges and tented camps, and walks between camps are usually between two and five hours. Visitors can expect to see hippos and crocodiles along the Luangwa River and huge herds of elephants and buffalo. The park is also home to the largest natural population of leopards.

2. Revel in rainforests and beaches in northern Madagascar 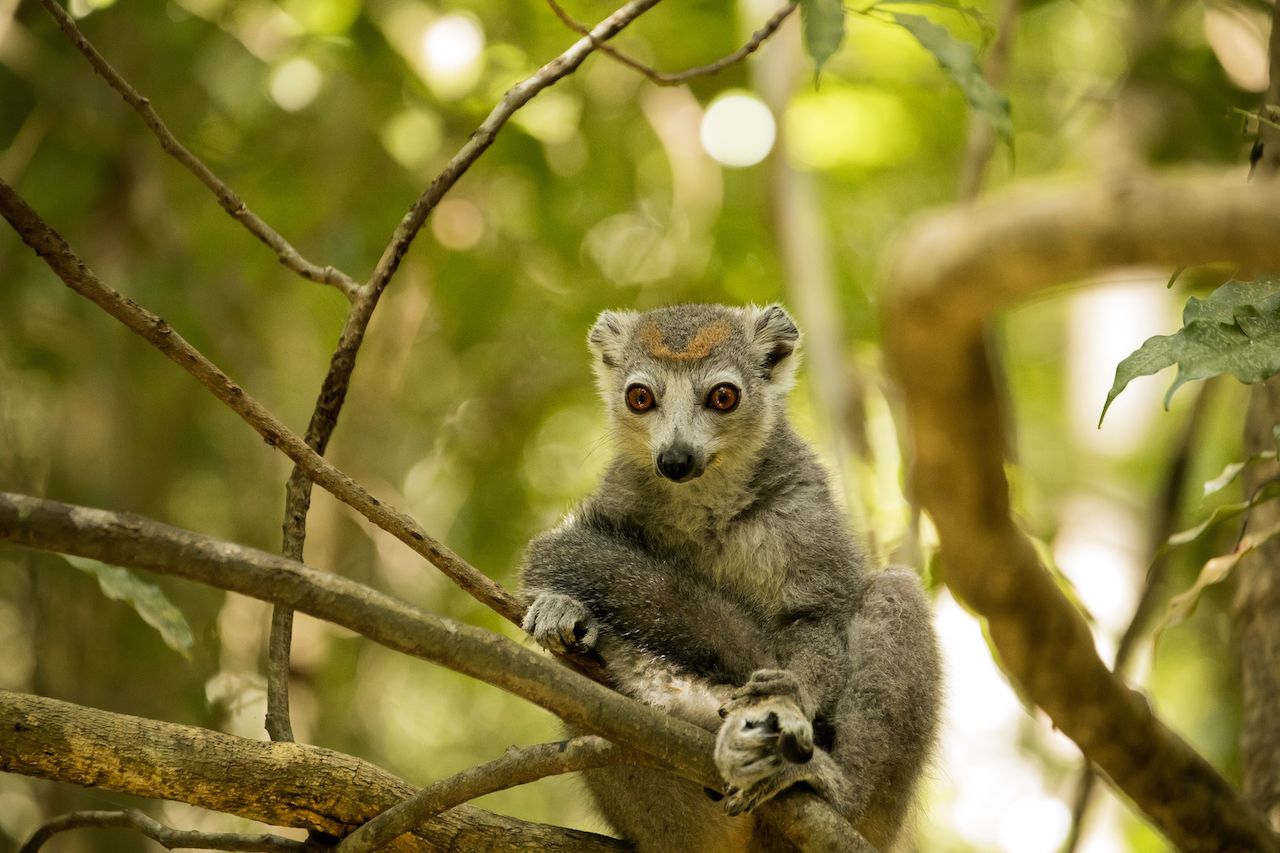 The island of Madagascar is home to a stunning array of endemic wildlife, and its topography ranges from lush jungles to white-sand beaches. Madagascar’s rugged terrain means that the best way to spot wildlife is on foot, and hikes are an essential part of most tours. Audley Travel’s Rainforests & Beaches of Northern Madagascar tour has a varied two-week itinerary to match its diversity of ecosystems. Early in the tour you can spot chameleons on the hike to the waterfall in Amber Mountain National Park, followed by a few days in Ankarana Reserve where you can observe crowned or Sandford’s brown lemurs. Relax on the beach or go snorkeling for the final few days in Nosy Komba, a volcanic island just off the coast.

3. Search for wild chimpanzees in Tanzania 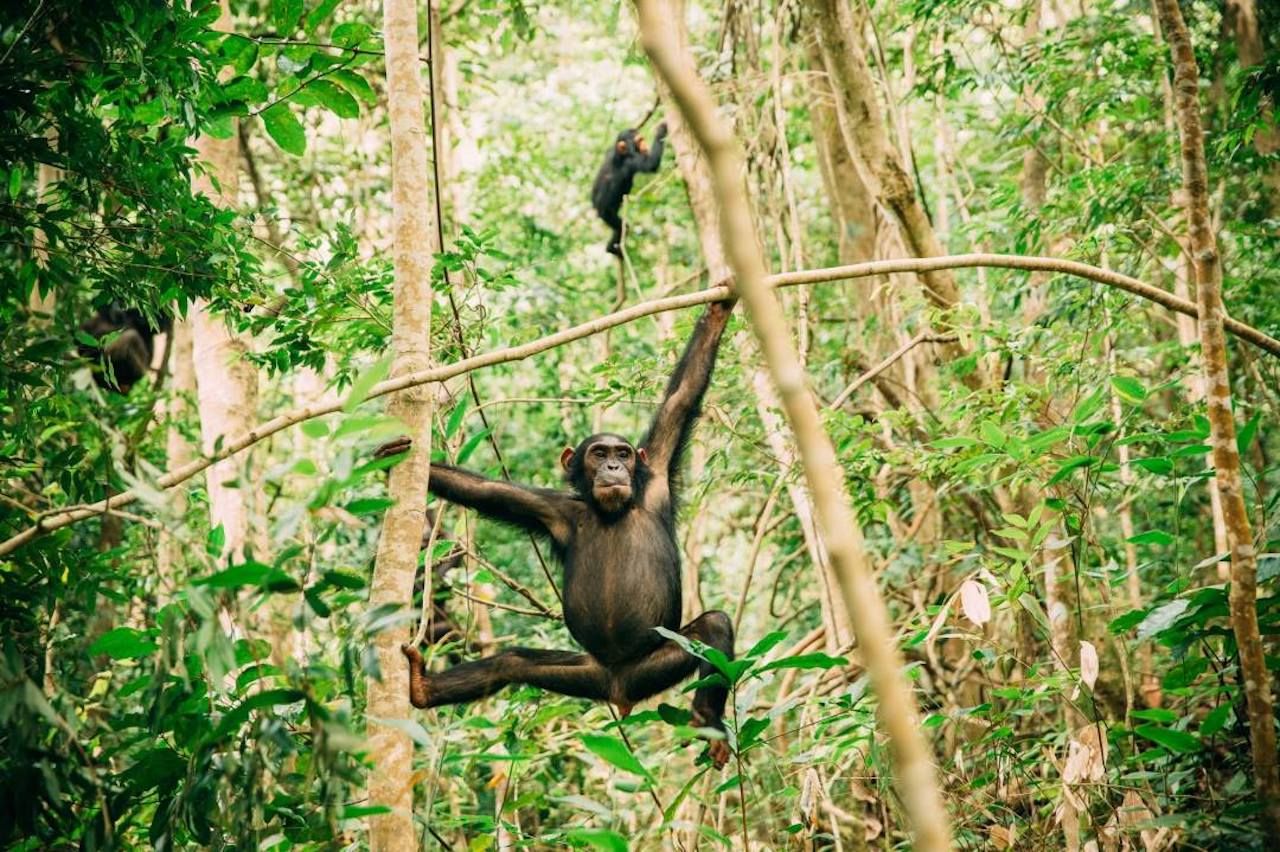 Chimpanzees are the stars of the show on this week-long tour run by Nomad Tanzania. The tour begins in Katavi National Park where visitors can expect to see large herds of Cape buffalo, zebra, wildebeest, giraffes, and elephants, as well as predators such as hyenas, wild dogs, and cheetahs. Visitors have the choice of going on both walking and Jeep safaris or a combination of the two. Then a short flight takes visitors to the remote Mahale Mountains National Park, home to the largest population of chimpanzees. The lodge is situated on a sandy beach on Lake Tanganyika, and in addition to going on hikes through the forest, visitors can also go swimming or kayaking.

4. Climb Mt. Kenya and meet the Masai Mara in Kenya 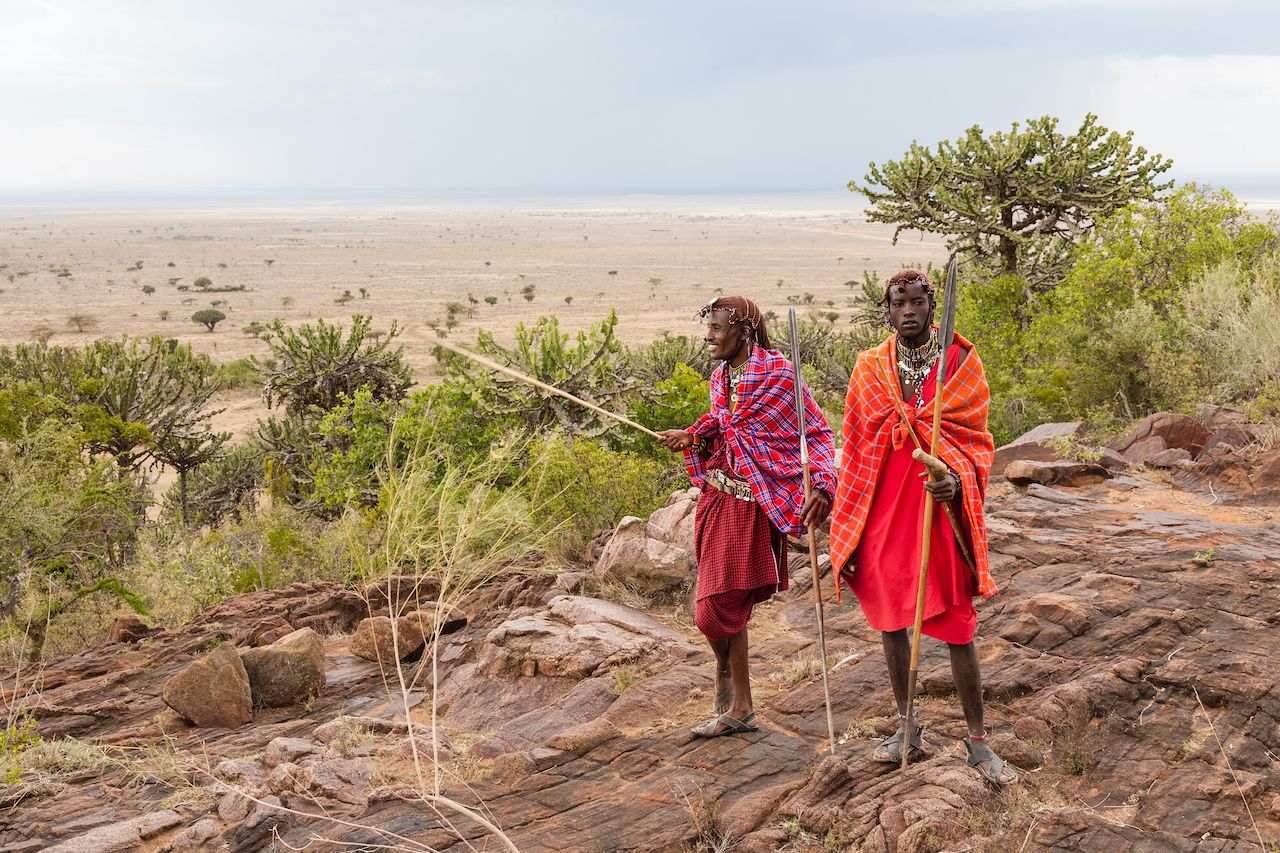 Asilia Africa’s 10-day tour in Kenya is great for those looking for variety. Day one begins by getting kissed by a giraffe at the Giraffe Manor or meeting baby elephants at Daphne Sheldrick’s elephant orphanage. The next day you can meet chimpanzees and rhinos at the Ol Pejeta Conservancy. Then, there’s a three-day trek up Mt. Kenya. After the hike, the last few days are spent doing both walking safaris and game drives in the Naboisho Conservancy where you can also be acquainted with the Masai Mara people. Accommodation includes lodges and bush camps, and Asilia prides itself in empowering local communities to take part in responsible ecotourism — $5 from each night of your stay goes toward AsiliaGiving, a program that provides scholarships and professional training in economically vulnerable communities. 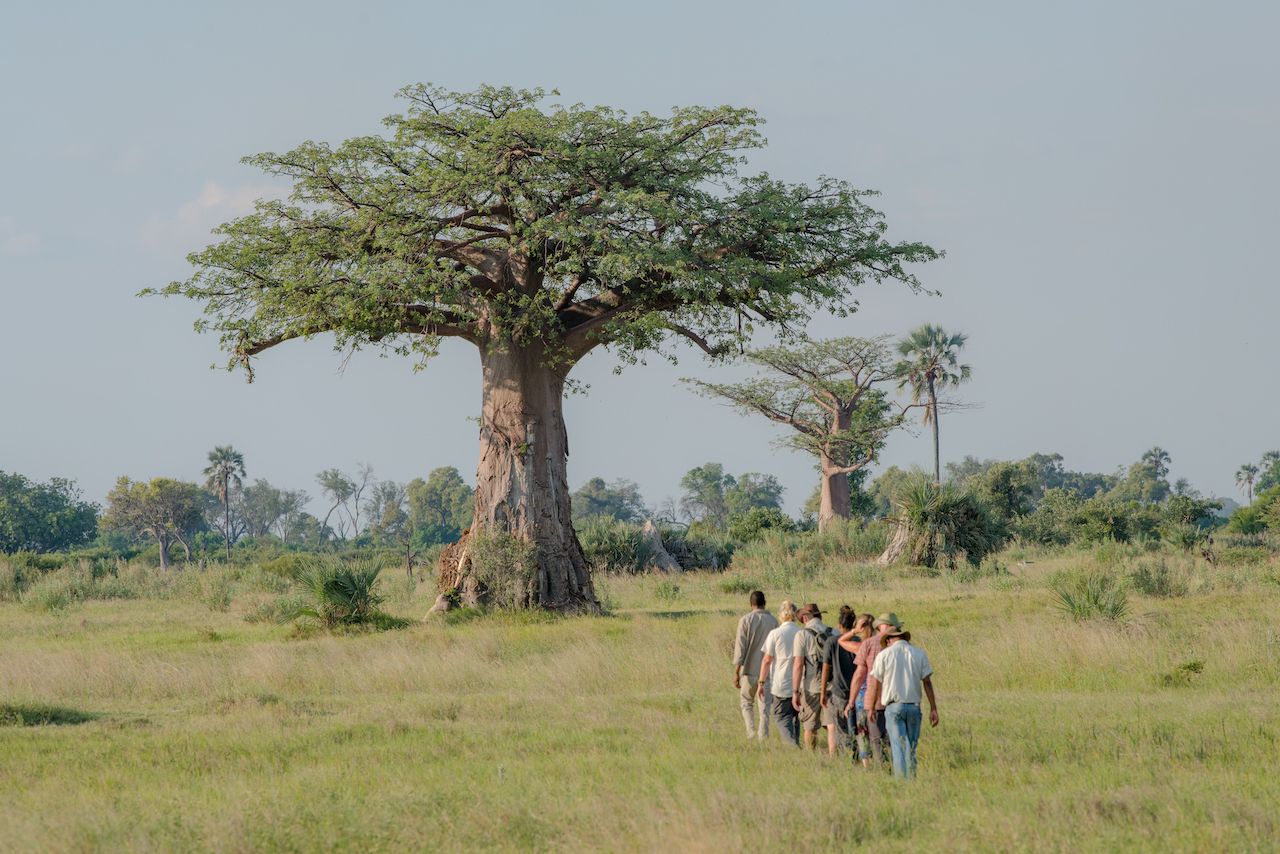 Hluhluwe-Imfolozi National Park is renowned for its rhino conservation and is home to the largest white rhino population in the world, as well as the Big Five. Imfolozi Wilderness Trails offers a very rustic walking safari experience, as their tours typically consist of four to five days of trekking through the park practicing leave-no-trace camping. Evenings are spent around the campfire and sleeping under the stars.

6. Explore the Okavango Delta by foot and canoe in Botswana 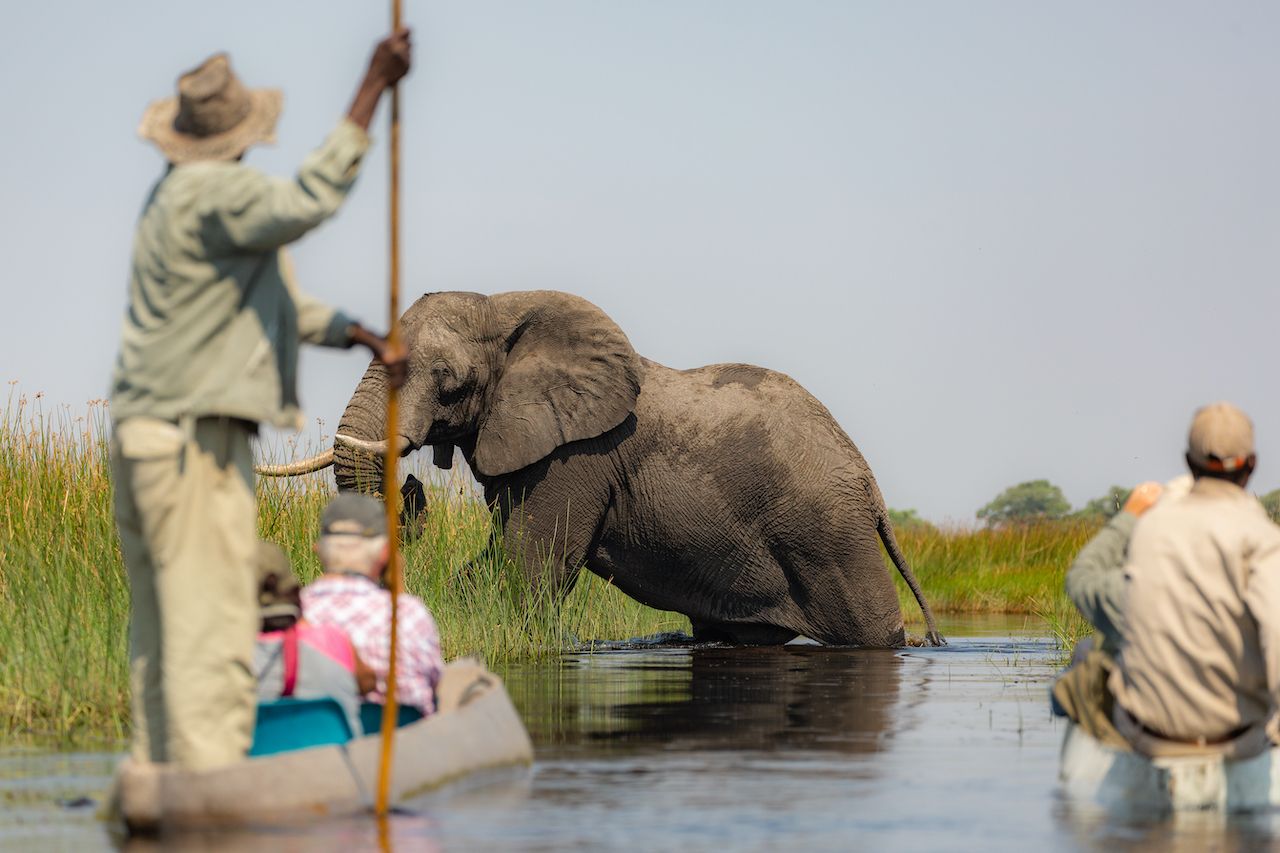 Walking Stick Safaris is a locally run tour operator offering a four-day introduction to the Okavango Delta, one of the Seven Natural Wonders of Africa. Guests are boated out to the exclusive Chief’s Island in Moremi Game Reserve where days consist of bush walks and rides in mokoros, or traditional dugout canoes. Guests stay in canvas fly-camps and can expect to see the Big Five. 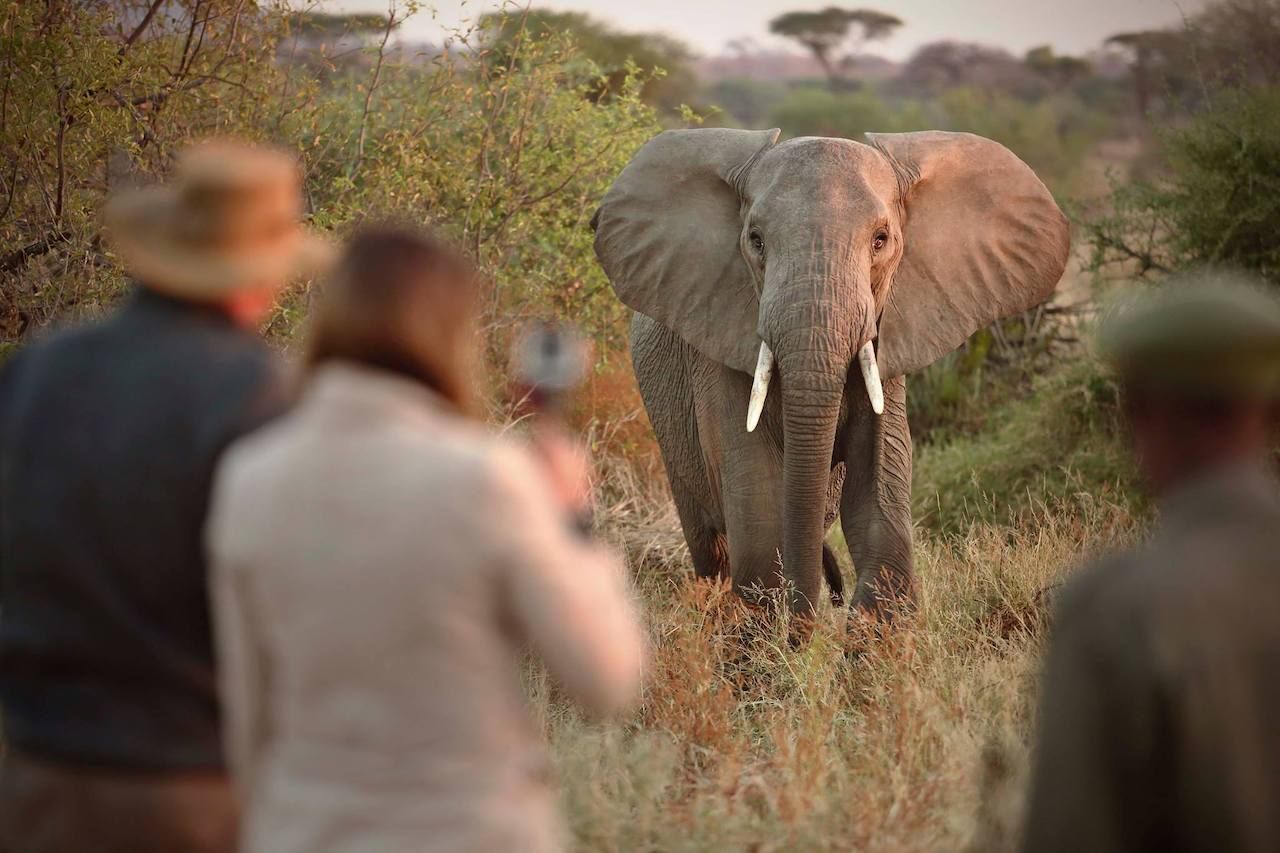 Visitors tend to flock to the Serengeti plains of northern Tanzania to snap photos of huge herds of wildebeest and zebras on the move for the “great migration,” leaving the remote confines of Ruaha National Park largely untouched. The park is renowned for having the largest concentration of elephants in Tanzania, as well as impressive herds of buffalo and a high density of lions. In fact, it is one of the few places in Africa where lions can be seen taking down an elephant. Kichaka Expeditions has a week-long immersion into the isolated wild where visitors can stay in tented camps and go on a variety of both walking and Jeep safaris.

This Luxury Lodge in Kruger National Park Is One of Africa’s Best Safari Destinations
California Has 280 State Parks. These Are the 10 Most Beautiful To Visit.
Patagonia Baggies Review: I Finally Tried the Cult-Favorite Shorts, and I Get the Hype.
This Portuguese Surf Town Is the Perfect Coastal Escape
The Best Beach Camping in California, From NorCal Wine Country To SoCal Surf Beaches