“You’re aware that every move could be your last. But you know you’re going to be okay.”

That’s how Iain Miller describes the most difficult ascents he’s accomplished of the eerily beautiful sea stacks that grace Ireland’s treacherous Atlantic coast. Miller has climbed more than 100 sea stacks, over 60 of them on first ascents — making him the world’s most accomplished climber of the strange and mesmerizing rock formations.

Miller first started climbing in his native Orkney Islands, a rugged archipelago off the northern tip of Scotland, but for the last 25 years he’s made his home in Donegal, along the craggy, weather-beaten shores of northwest Ireland. As he tackled the world’s most dangerous sea stacks, Miller’s rising fame drew the interest of others, who reached out to him to get his help in bagging a sea stack of their own — and now Miller has his own business, Unique Ascent, sharing the secrets of this stunning, untamed corner of the world. 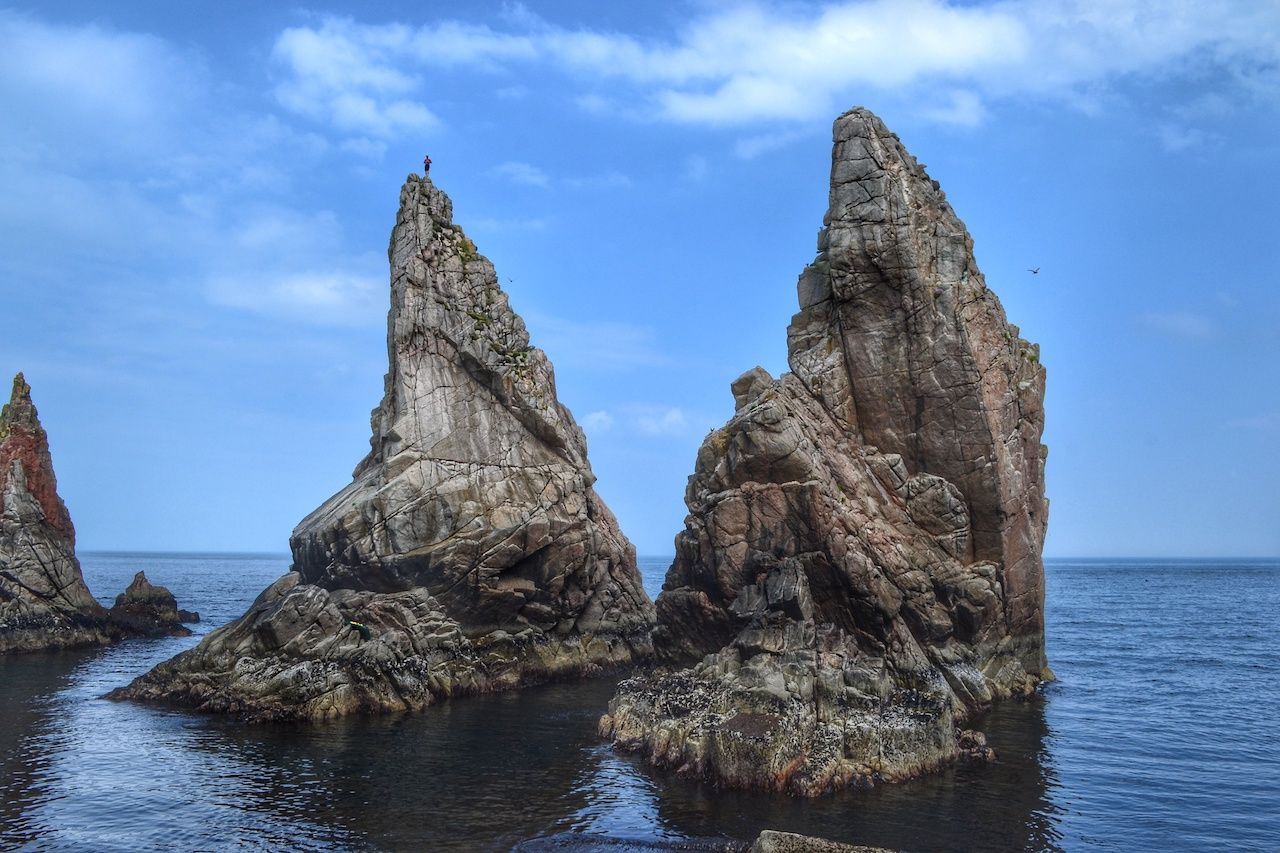 After succeeding in scaling a particularly tough climb, Miller describes the rush that hits him after he’s back in the safety of his car: “A bomb goes off in your head.” It’s a feeling of accomplishment that’s “very hard to replicate any other way.”

Despite the fact that he doesn’t let the achievement get to him until after he’s done, Miller is careful not to describe his singular focus during a climb as just being present in the moment. “Living in the moment is an incredibly dangerous mental state to be in,” opines Miller. When you’re in the moment, he says, you have no past and no future — so you aren’t thinking about consequences.

For Miller, it’s a balance of engaging in the present and realizing the consequences of what you’re doing — thinking several steps ahead. “It’s a game of physical chess,” he says. 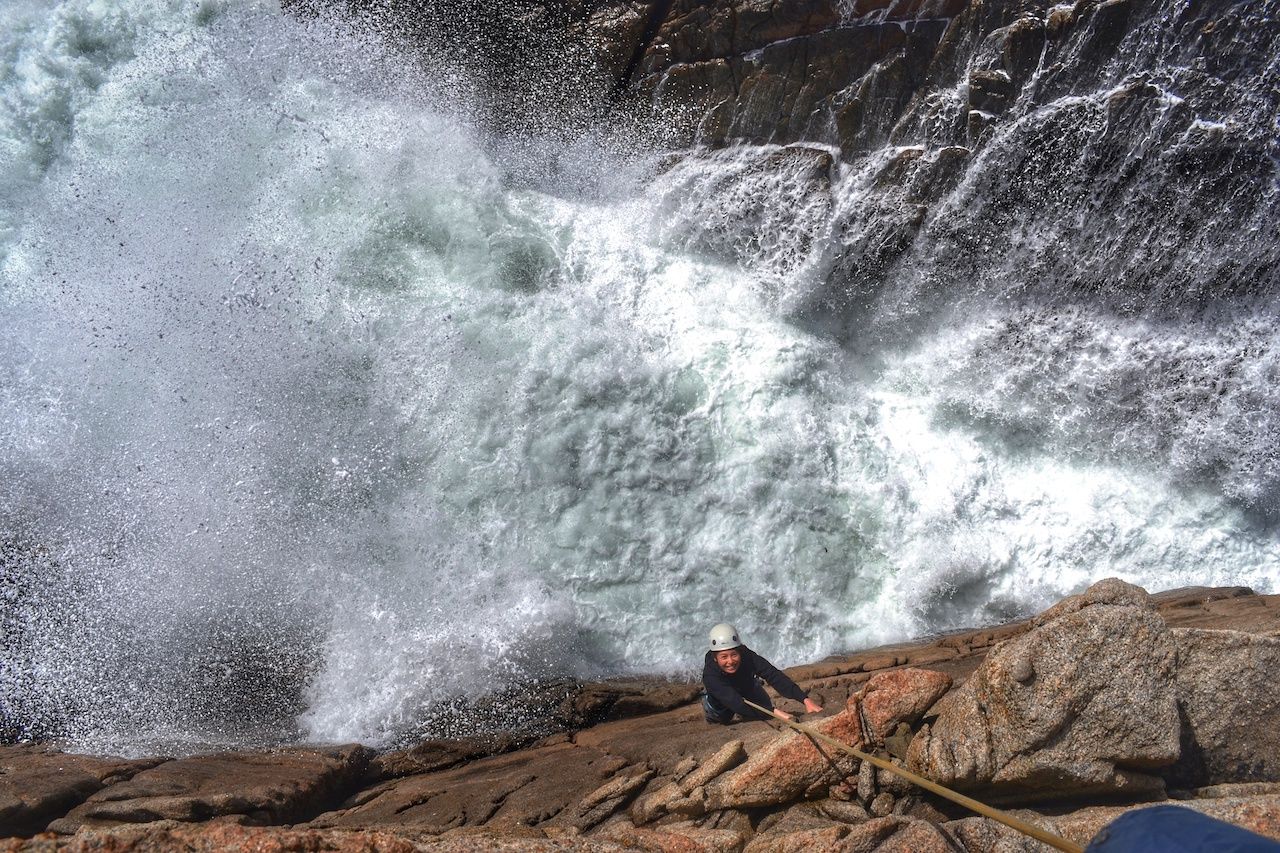 In sea stack climbing, Miller says the biggest danger is in actually reaching the rock tower in the first place, and then getting back to the shore afterward. After all, the sea stacks are there because of erosion caused by the blistering winds and ferocious swells of the North Atlantic. Massive cliffs, themselves products of erosion, are eaten away by the relentless ocean swells that carve them into peninsulas, then arches, and eventually into sea stacks.

“The sea is trying to drown you,” says Miller. Comparing it to other types of high-risk climbs, he explains, “The sea is the snow and ice of sea stack climbing. It’s the unpredictable variable that keeps it exciting.”

Miller’s knowledge of the ocean is one reason he’s, to our knowledge, the only person on Earth who scales sea stacks for a living. Because he’s been in Donegal so long, he both knows the ocean and knows when to heed its warning. He lives there, so he can wait another day, or even a week if necessary. “If the conditions are not right, you are definitely not going to be doing it,” he says.

But the sea can also be your friend. The farthest Miller has fallen climbing a sea stack is 60 feet. Because he landed in the water, and it was deep enough, Miller was unhurt. Sea stack rocks can break off, he explains. They’re made mostly of sandstone and quartz, softer materials that can test any climber.

Planning a climb for a day — or years 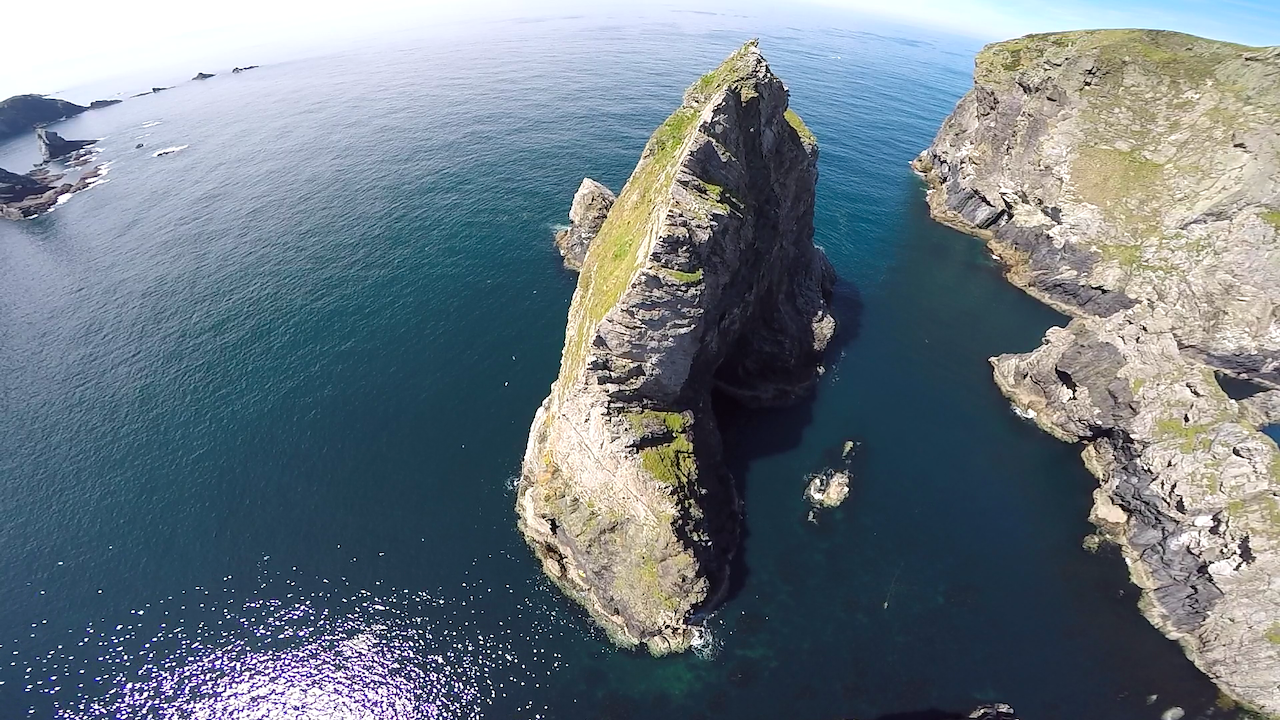 Despite the risks, Miller rejects the idea that he is participating in a “lunatic fringe” sport. “I’m not a daredevil,” he says. Rather, he considers the conditions of the sea and weather, the state of the rock he intends to climb, and how to manage the descent in a mental checklist before ever climbing a sea stack. “You have to check off the boxes,” he says.

Miller might see a relatively attainable sea stack and reach its peak the same day. For more challenging rock towers, Miller says he might visit it a couple of times to truly understand it, before resolving to begin his ascent. Miller feels confident in his assessment that he’s been first to reach the peak of over 60 sea stacks because, upon reaching the top, there’s been no sign of any previous climber. The only way to get back down is by rappelling, and there’s nary a bolt nor any other sign that someone else has done so.

As for his first free solo of the 330-foot-high Cnoc na Mara back in 2008, Miller says the preparation took his entire climbing career up to that point. The sea is particularly ferocious there, and the climbs entails a 3.7-mile round-trip across it. There’s no margin for error in climbing straight up from the sea, traversing a sliver of a ledge 300 feet above the water, and scaling an impossibly narrow, loose-rock wall. Miller has of course also bagged Ireland’s tallest sea stack, the 148-meter-tall (468 feet) Tormore Island. 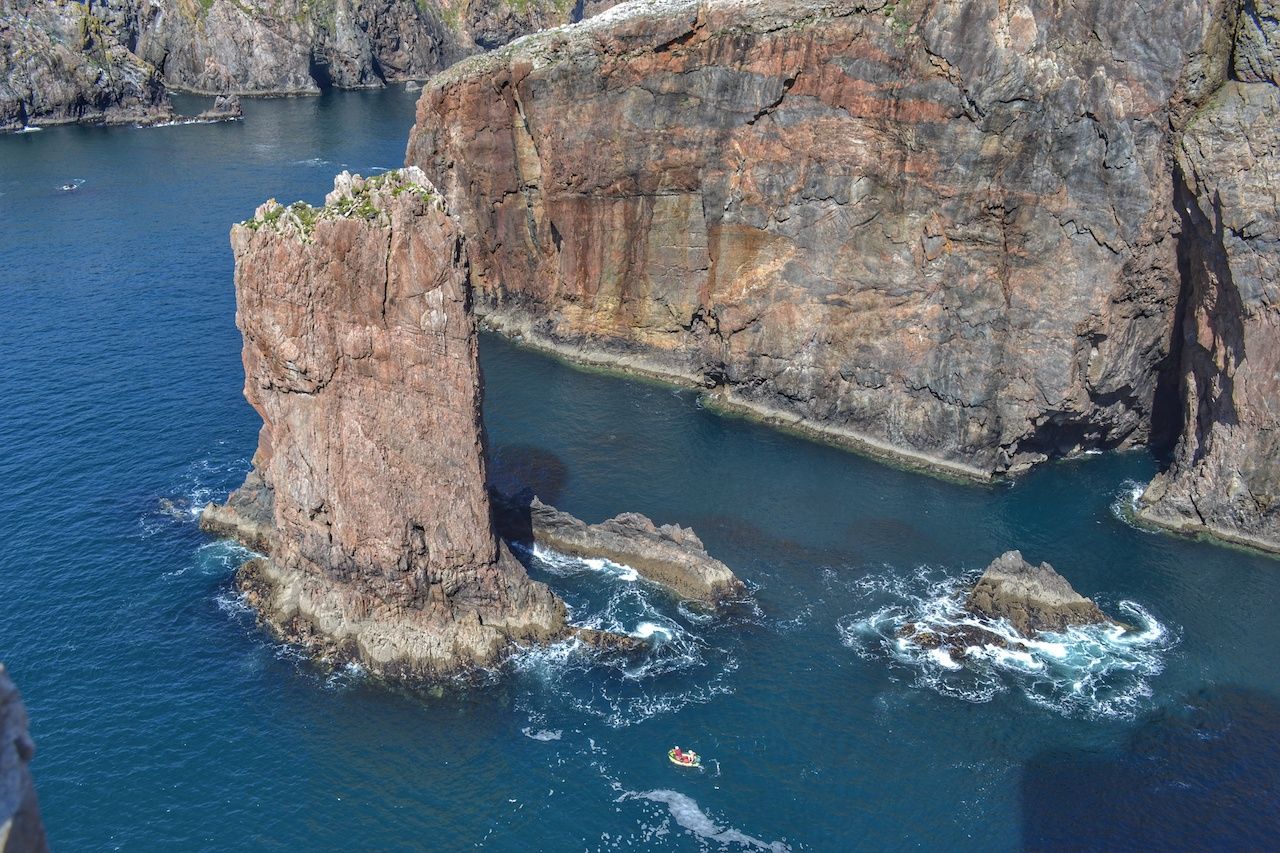 Miller’s success earned him admirers, and in 2010, he was approached by someone who wanted to book him for an entire week to explore Ireland’s wild coastline. He’s been taking out clients ever since.

Depending on how much time they’ve reserved and their experience, Miller just might take them out to some of the very challenging sea stacks that he first free soloed — only this time they’ll be prepared with bolts, ropes, and all the necessary climbing equipment. Miller says 80 to 90 percent of his clients have never rock-climbed before, so he also offers classes in the sport.

As Miller is first to point out, his clients soon learn that reaching the sea stack can be as scary, and thrilling, as actually climbing it. Sometimes a Tyrolean traverse — getting from point A to B by shimmying along a rope, like a slow-motion zip line — is the only way to get across a particularly gnarly stretch of sea.

Miller also takes clients kayaking to sea caves where pools of water glow with the midday sun of summer, or paddling through tunnels etched through remote islands. He may take them spelunking in a place like Owey Island, where they squeeze through a narrow opening in the rocks in a descent to a lake 150 feet below ground. 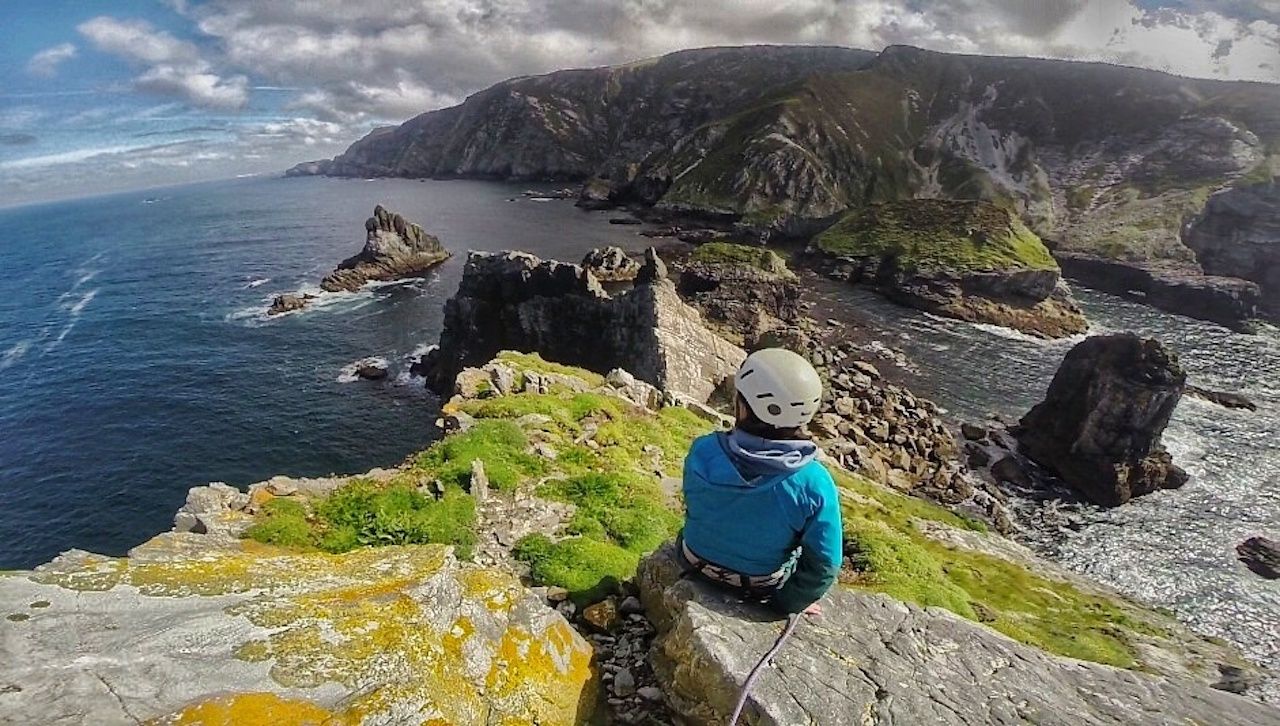 There’s probably no one as familiar with the many nooks and crannies of Donegal’s craggy coastline as Miller, and he’s thrilled to share its rugged beauty with others. His timing is perfect, since even more travelers to Ireland are coming precisely for its untamed scenery. Many want to explore some portion of 1,500-mile-long Wild Atlantic Way along western Ireland; Donegal lies near the north end of it.

But with Miller, you can do more than take pictures of that awe-inspiring coastline. You can touch it, smell it, climb it, and even go inside of it. “It’s not castles, shamrocks, and Guinness,” he says. “It’s the raw nature of the wild Atlantic coast.” 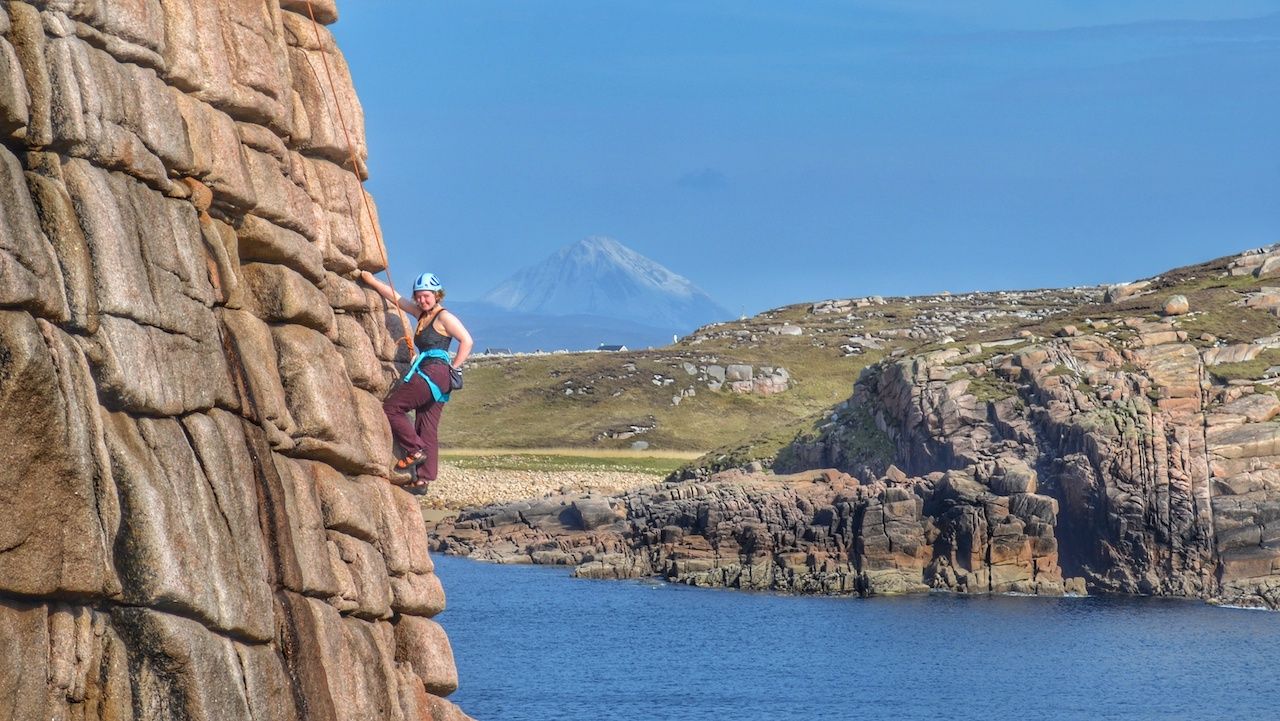 Discovering and tackling Donegal’s shoreside mysteries can only be done in the months from March to October, says Miller. It’s some time in March that the Atlantic changes from its winter mode to its summer mode, and the dangerous swells that define it in the colder months give way to the sea’s much calmer temperament.

Miller also assures us that the tours he takes guests on are safe, even though many of them get worked up about it ahead of time. “In their heads, they are putting themselves in danger. But they’re not,” he says.

The thrills come instead, says Miller, when you find yourself paddling next to basking sharks, when a group of seals swims underneath you, and when you explore uninhabited islands. “These are the moments that are not planned,” says Miller. And for many travelers, they end up being the highlights of their trip to Ireland.