On the morning of April 8, Wuhan, ground zero of the global coronavirus outbreak, quietly reopened after 78 days of lockdown. Breakfast stalls selling hot dry noodles opened, too. Eager customers quickly lined up. Dine-in service was still not allowed. Many eaters just dug into their noodle bowls standing on the curbside.

“I haven’t had it for two months. I’ve missed it a lot,” a woman exclaimed, holding an almost-finished paper cup of hot dry noodles in her hands, in a video posted on social media.

Wuhan is known as the breakfast capital of China. A survey conducted by a national news outlet claims that more than 90 percent of its residents eat out for breakfast. About 25,000 registered breakfast vendors dot the city, operating year-round. Of the city’s countless breakfast specialties, hot dry noodles top the list. Commercial data shows that 50 percent of Wuhan breakfast sales comes from this one dish. 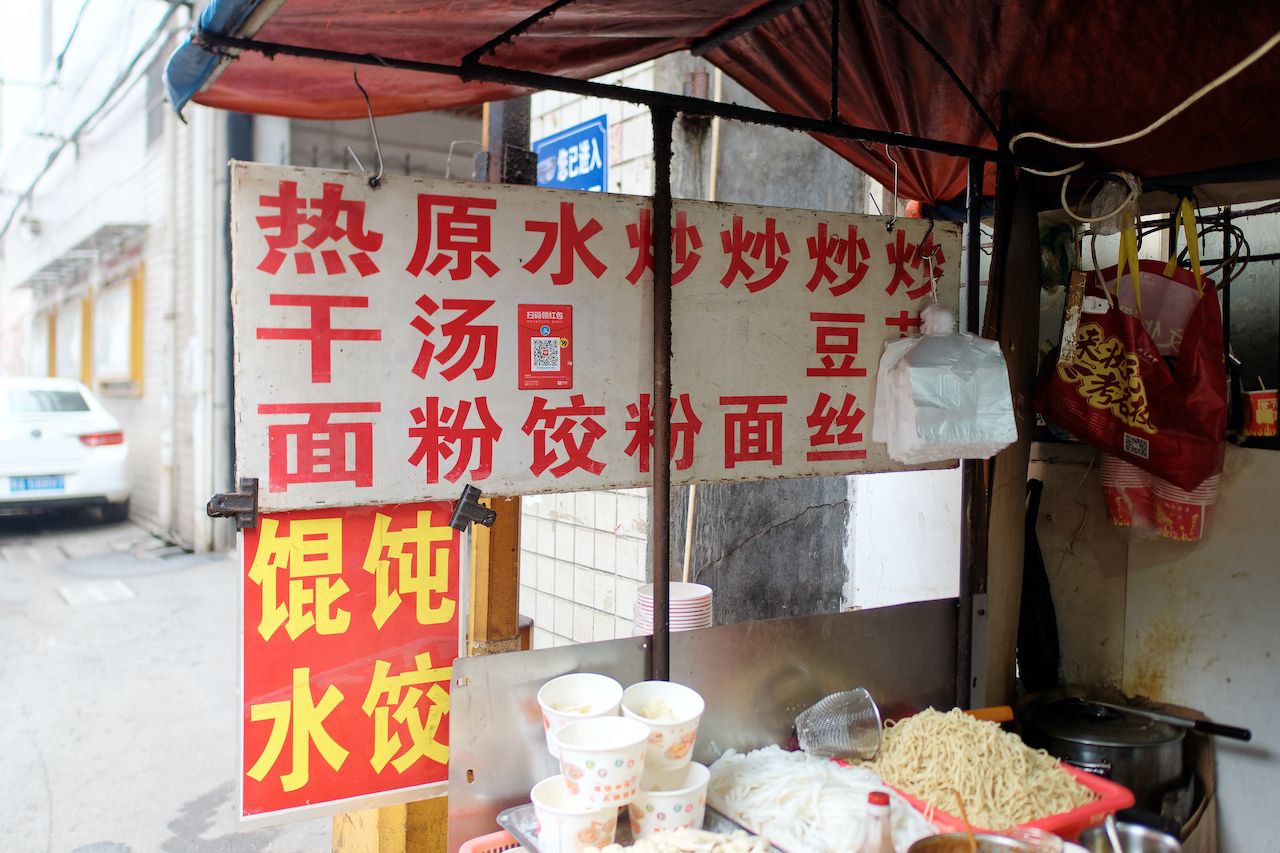 I’ve never lived in Wuhan, but I was introduced to the dish in college by a roommate. What intrigued me the most about this dish is that every Wuhan local I’ve met over the years, including school friends and co-workers, both in China and in New York, is absolutely obsessed with hot dry noodles. Wuhan is not known for its abundance of tourist hot spots, but when I ask people from Wuhan what the top attraction is, the response is consistently hot dry noodles.

This dish is true to its name: The noodles in this dish do not swim in a broth, while the primary condiment dressing the noodles is sesame paste and chili oil. The cooking is minimal: Simply blanch precooked noodles in boiling water, drain the water, and top the noodles with a generous dollop of sesame paste, a splash of hot sauce, and a handful of crunchy relishes — usually pickled carrots, green beans, and chives. To make a good bowl of hot dry noodles, however, is not easy, as people in Wuhan are persnickety about the dish.

The noodles have to be fresh. “Second-day noodles are never as springy,” a noodle shop owner once explained to me. A spoonful of baking soda is added to the dough to make the noodles chewy and slippery. The sesame paste for the sauce, ideally, needs to be grounded and pressed at room temperature, to preserve the scent and fragrance of the sesame fat.

The relishes, usually made from pickled turnip or mustard root, have to be crunchy. Even with the right ingredients, serving the dish is tricky.

“Can’t let it sit. You stir it vigorously, right after you it comes out of the kitchen. It becomes stiff and lifeless after a short while,” Jingpei, a college student from Wuhan, explained. Locals are serious about hot dry noodles, even when the dish is served in a paper bowl.

In fact, eating from a paper bowl is the proper way to enjoy the dish. Eating hot dry noodles on the go is extremely satisfying, whether you’re standing at the bus stop, squatting on the curbside, or sitting on a rickety plastic chair right outside the noodle shop.

“People elsewhere simply don’t get why we like walking around eating a bowl of noodles. We just like it,” said Jingpei. 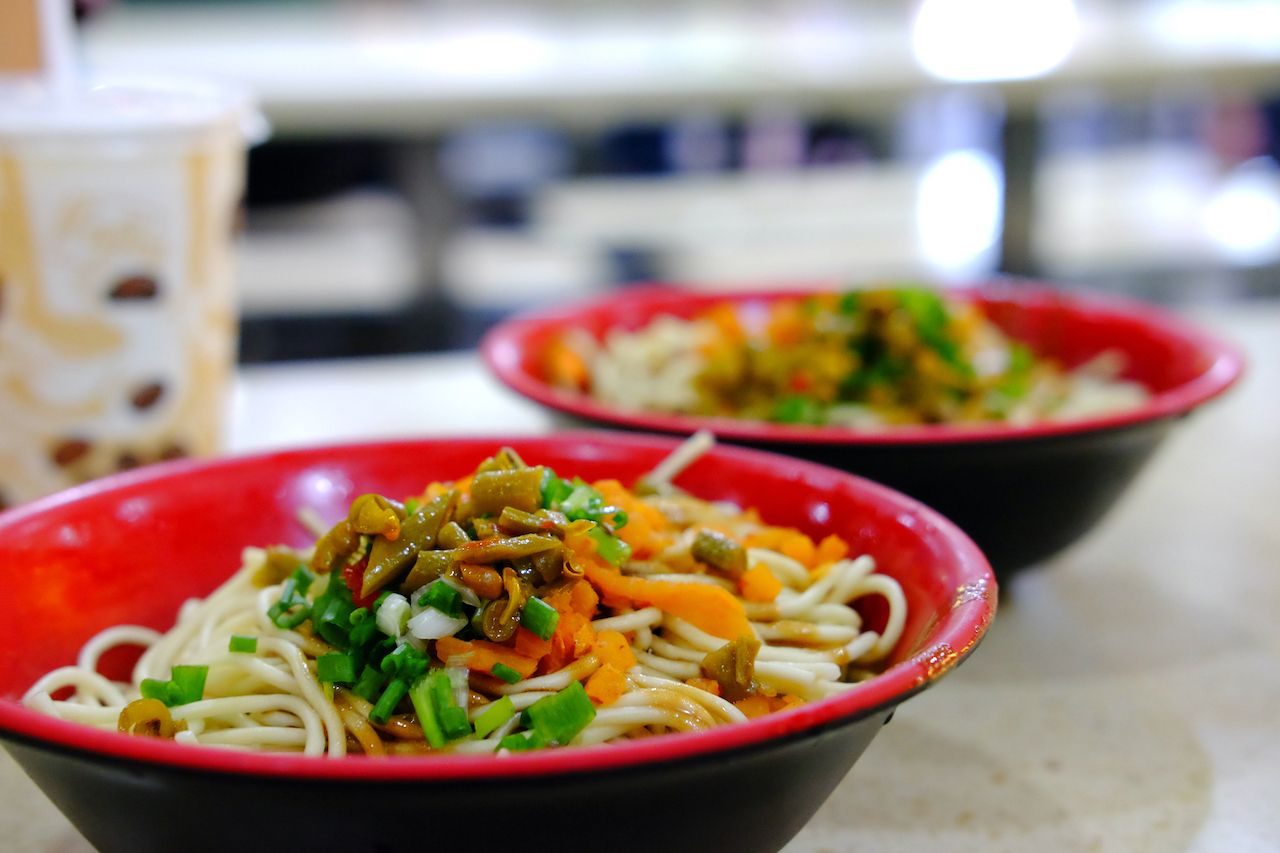 As the city went into lockdown in January, Wuhan’s previously bustling street food scene became eerily quiet. Noodle shops, along with most other eateries, were closed. People stayed at home, “not even venturing to the balcony most of the days,” according to a video posted on the social media accounts of Cai Lin Ji, a Wuhan-based noodle shop.

Data from Meituan, a delivery and restaurant review platform, showed that transactions during the lockdown were mainly for essential products like grocery and medicine. Meal delivery barely existed, due to a combination of stringent travel restrictions, concerns for infection, and restaurant closures.

“We cooked. There is a vegetable vendor who delivered groceries and essentials to our building, and the building staff would send the food to our apartment,” another local resident explained when I asked her how she got food during the two-month lockdown.

One such shop is Peng Ji, which has 180 locations across Wuhan. One of its store managers, Gui Heng, found it hard to keep himself occupied when his previously hectic life came to a halt. So when he learned that volunteers were seeking food donations for Wuhan’s first responders, he immediately jumped at the opportunity and offered to send freshly made hot dry noodles to medical workers. This, however, turned out to be more difficult than he thought. For one thing, ingredients were hard to procure, as many local food factories were closed during the lockdown. All but one noodle producer he had partnered with was still operating. The factory manager was understanding, and agreed to supply the noodles at production cost.

The timing of preparation, cooking, and delivery had to be tightly coordinated with the medical workers’ schedules to guarantee the quality of the dish, especially for a hot dry noodle perfectionist like Gui Heng. He kept himself updated with the shift schedules at the hospitals and made sure that the noodles were still warm and chewy when they arrived, be it late at night or early in the morning.

The medical workers were thrilled. Despite their exhaustion, many even got up early just to enjoy a bowl of noodles. This encouraged Gui Heng and his team. As medical workers across China came to Wuhan to support the fight against the pandemic, the size of his orders kept growing. During the lockdown, his team delivered more than 50,000 bowls in total.

The famous noodle business Cai Lin Ji also got creative to serve local residents during lockdown, by tapping into community-based retail for its hot dry noodle kits. Typically, residents in a high-rise that Cai Lin Ji partnered with would form a huge group on WeChat, a social media platform. The group organizer, usually a volunteer living in the same building, would collect order information as well as payment (also via WeChat) from its members and send it to the restaurant. At designated delivery times, the restaurant’s staff would drop off a huge box of noodle kits at the building’s entrance and then the group leader would deliver the orders to each apartment.

“We launched the sales about a month into the lockdown. More than seven thousand orders were placed the first day,” a Cai Lin Ji staff member told a reporter for CCTV China, a national news network. “Wuhan people, native or not, can’t do without hot dry noodles. Everyone felt something was missing after such a long time without it.”

Life went on like this for another month, amid anxiety, resilience, and hope. With the outbreak under control, a soft reopening of the city was scheduled. On March 25, when the city resumed its public transportation, its long-dormant food scene quickly bounced back.

Cai Lin Ji, by popular request, opened the same day for delivery and pick-up. Delivery men swarmed to its door. In a video posted to its social media accounts, a store manager almost had to yell to keep order. “So busy! We were struggling to keep up,” he says in the background. According to the financial news website JRJ, Cai Lin Ji shops sold more than 20,000 bowls for pick-up alone the following week.

Data from Meituan shows that in the first five days after March 25, as more businesses tentatively reopened, order volume for hot dry noodles on its platform were three times higher than when Wuhan first went into lockdown. Other types of food saw a similar come back. At Dehua Lou, an old breakfast restaurant, the manager told Chinese news website Observer Network that the business was even better than normal times. “A guy bought 60 meat buns in one order,” he said.

Then, on April 8, on the official day of reopening, eating hot dry noodles once again became the ritual it was before the pandemic hit. By 12 in the afternoon that day, more than 10,000 servings were sold across the city. Other street foods did equally well. In the peak time from 7:30 to 8:00 AM, 1,000 orders were placed on the two biggest delivery platforms for Doupi, another beloved breakfast food made of tofu wrap and rice. Jiqing Street, a popular restaurant area, was full of eaters slurping noodles on the street (while standing two meters apart from each other).

Jingpei, who has been busy with her graduation thesis and school work, hasn’t had a chance to eat out yet. When I asked her what she craved the most, she answered without hesitation, “Hot dry noodles and doupi!”

Many mom-and-pop eateries, despite their popularity before the lockdown, remain closed. This is partly out of concern for public health: hot dry noodles taste best fresh out of the kitchen, but dining-in poses a higher risk of virus transmission. Many vendors, therefore, have chosen to wait before fully reopening.

As many ingredient suppliers are still operating at reduced capacity, transportation under monitoring, and many essential workers not yet back on the job in Wuhan, the ingredients and labor costs remain high.

“Margins are low for hot dry noodles to begin with. And we don’t want to agonize customers by raising the price,” one noodle shop owner told me.

The owners, however, are willing to explore new business models under the new normal. Expecting dine-in business to underperform this year, many of them, even small operations, are exploring online channels, including partnering with delivery platforms and launching community-based sales and noodle kits. This will also entail adjusting their recipes to accommodate home assembly.

The coronavirus crisis has added another layer of significance to this beloved dish, making it a symbol of the city’s resilience. One widely circulated cartoon shows the city, personified as a newly-recovered bowl of hot dry noodles, cheered on by other Chinese regional dishes. Though caution still guides the actions of many, there’s optimism at work in Wuhan too: More and more people are getting out of the house, going back to work, and making a point to resume their pre-lockdown routines, which, of course, include a bowl of warm hot dry noodles in the morning.

I Took a Virtual Tour of Wuhan, and It Showed a Side of the City the News Misses

China's Phoenix Towers Will Be the Tallest, Greenest Buildings in the World