View all travel news
Top Destinations
Top CitiesView All Destinations
Trending Regions
Trending Cities
Load More
While most sports fans were immersed in the NBA playoffs, one of the most monumental moments in athletic history went down this month in Yosemite. Matador Ambassador Colin Delehanty was there.

ALEX HONNOLD, a 26-year old climber from Sacramento, made a first ever attempt earlier this month to solo Yosemite’s three biggest walls in a single day. “The Triple”, as it’s called, links together Mount Watkins, El Capitan, and Half Dome into 7000 vertical feet of climbing. Honnold would free solo [climbing without a rope or safety devices] for all but 500 feet of the Triple.

You’ll never hear Honnold admit that what he’s climbing is “a big deal.” His friends even call him “no big deal” Honnold for being so casual about his achievements. And yet the truth is that Honnold solos routes too hard for most people to climb even with a rope. Watching him solo is remarkable. He looks calm and very much in control of his movements despite being hundreds or thousands of feet off the ground. His ability to dial back emotions and focus on just rock climbing allows him to enjoy Yosemite in a way few ever will.

Since May, Honnold has been making headlines for his achievements around Yosemite. He and another professional climber, Tommy Caldwell, made climbing history when they free-climbed Yosemite’s big three in 21 hours. He soloed Half Dome in 1:22, 48 minutes faster than his previous record. He also became the first person to free solo the west face of El Capitan. It was clear that he was ready for a bigger challenge.

I worked with a number of other cameramen at Sender Films to fully document the main event. We split up into teams taking positions around each of the three rock faces. Half of the group used ropes to capture Honnold up close while the other half set up longer shots for a different perspective. Sender is currently working on their seventh Reel Rock Film Tour where they’ll reveal the footage with a full story.

Honnold started climbing the South Face of Mount Watkins at 4pm. By starting later in the day he would be able to avoid the sun entirely. The colder tempertures would keep his body cool and provide better friction for climbing.

Honnold was off to a good start finishing his first climb in a ridiculous 2 hours and 22 minutes. Normally this climb would be completed in days not hours. After hiking back to Tioga Road and driving for an hour down to the valley floor he parted ways with the group to climb The Nose, a massive prow stretching 2900 feet up the middle of El Capitan, at 9:30pm.

As it got closer to night I could see headlamps appearing all over the wall from other climbers. While setting up my shots I got an urgent call from the project leader, Pete Mortimer. He said Honnold had forgotten his chalk bag and wanted to know if he was climbing without it. I reassured Pete that I could see a fast moving light that could be none other than Alex Honnold. 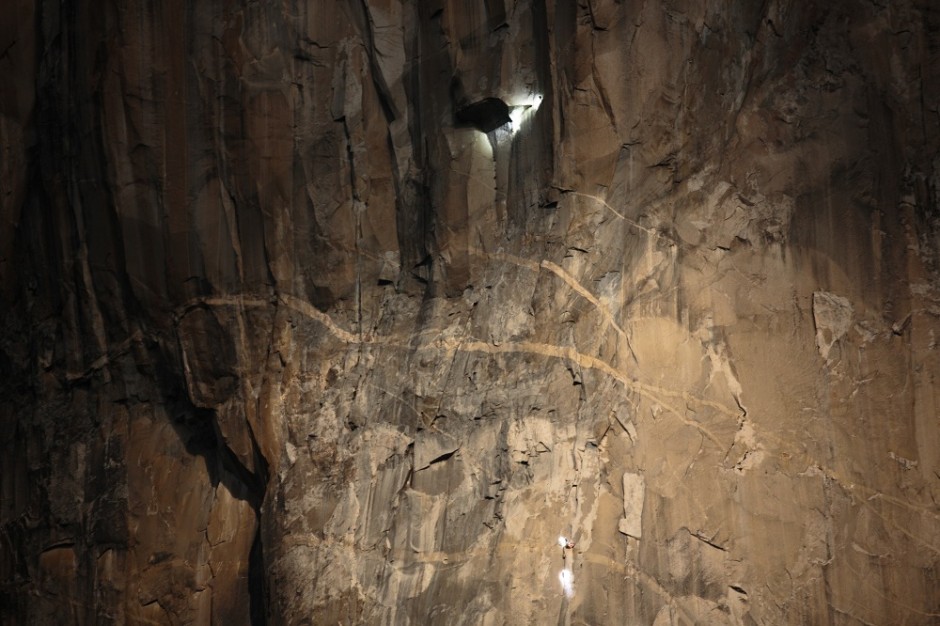 Alex Honnold's headlamp is visible as he exits the Great Roof toward the top of the photo.

Despite a few wet sections of rock from rain the previous day Honnold managed to climb to 1000 feet without a chalk bag, until he was able to borrow one from a nearby group of climbers. It was amazing considering he had never climbed this route at night. His headlamp painted a trail all the way to the summit passing two of his friends who were linking Half Dome and El Capitan. Honnold was excited to have their company in the 6 lonely hours it took him to top out.

Honnold left El Capitan at 3:30 and worked his way up the Death Slabs — a steep and dangerous approach at the center of most rock falls on Half Dome — to Half Dome by 8am. He climbed strong reaching the summit before 11am about 19 hours after starting at Mount Watkins the previous day.

Fans who recognized him from 60 Minutes and the cover of National Geographic gave him a warm welcome at the finish line, an unusual sight for a climber. Even people who didn’t know him were astonished at his achievement and wanted to meet him. Before crashing for the day Honnold made the hike down with friends to enjoy some much deserved pizza and a cool shower.

This past Sunday Alex Honnold and Hans Florine set a new speed record on The Nose of El Capitan at 2:23:46, shaving 12 minutes off the old record. With all the rock on our planet there’s no way we could know what he’ll do next. If you’re interested in following his upcoming adventures, he regularly updates his Facebook page.

Tagged
Climbing California, United States Ambassadors
What did you think of this story?
Meh
Good
Awesome
✖
travelstoke
Download the mobile app
stoked by