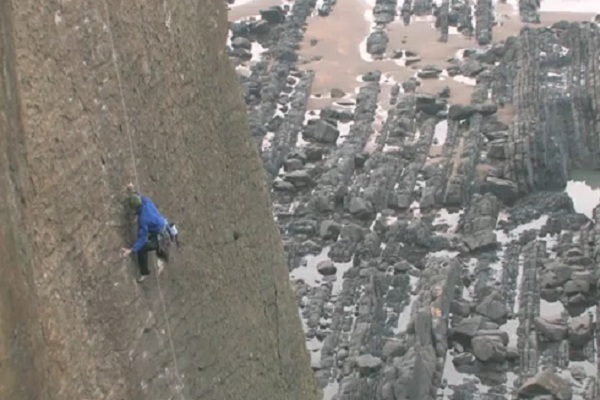 Britain’s rock climbers have a long, rich history of doing absolutely insane things. Luckily, most of them have been caught on video.

YOUR FAVORITE EDITOR is turning 22 this Saturday, and in true Matadorian fashion, he’s celebrating by taking off at the last minute to go trad climbing in New Hampshire. To tide you over in my absence, I’ve collected three of my personal favorite climbing videos from across the pond.

As much as it pains me to say it, England beats New England for sheer guts; they climb such scary stuff that they literally had to invent a new grading scale–the “E scale”–to describe it.

So here’s to Britain’s fearless climbers. May I one day have half the guts you do.

Climbing films don’t get more classic than Hard Grit, Slackjaw Films’ 1998 profile of the edgy, dangerous culture of Peak District climbing. This scene, of Neil Bentley leading the frighteningly unprotected route The New Statesman (E8), is one of my favorite in the film.

After onsighting Bachar-Yerian (5.11c R/X), one of Yosemite’s most run-out and dangerous routes, George Ullrich decided that it wasn’t exciting enough. His solution was to try it again without the bolts, instead only using metal hooks and wire loops slung around pebbles to protect against a fatal fall.

First climbed by James Pearson, this seaside slab is a magnificent slice of rock, and sparsely protected enough to make for a genuinely scary-looking climb. While the route’s since gotten caught up in a squabble over its grade, that doesn’t make it any less impressive.

Tagged
Climbing United Kingdom
What did you think of this story?
Meh
Good
Awesome