Cycle touring with kayaks is not easy. In addition to the 20kg of camping gear, food, and clothing, two kayaks add a further 40kg with the trailer.

Starting in Vancouver and cycling over 2,500km to the Rockies and back meant we pulled our beastly luggage across more than just a flat valley trail. From sea level, we climbed thousands of metres of altitude with steep grades over some of Canada’s highest highway passes into the alpine. Neither of us were cycle tourists; I was hardly a cyclist. But the idea of a human powered adventure and the allure of slowly exploring British Columbia and the Rockies won us over. 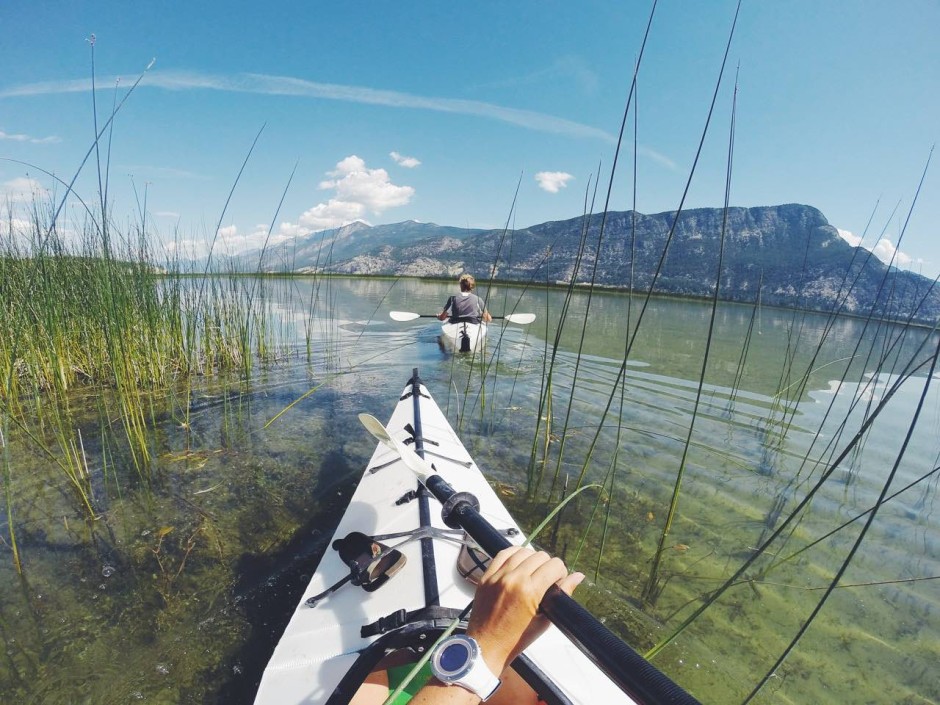 We were already 1100km in when we reached the Columbia Wetlands and had gone more than a few days without using the kayaks.We started to wonder if they were worth bringing along. On an early morning, we found this waterway when pedalling was the last thing we wanted to do. As the official source of the mighty Columbia River, it was a sight. Crystal clear green waters shimmer beneath an intimidating wall of the Rocky Mountain's jagged peaks rising from the lake's eastern flanks. As we cruised between the tall weeds we knew, bringing the kayaks was a good decision. 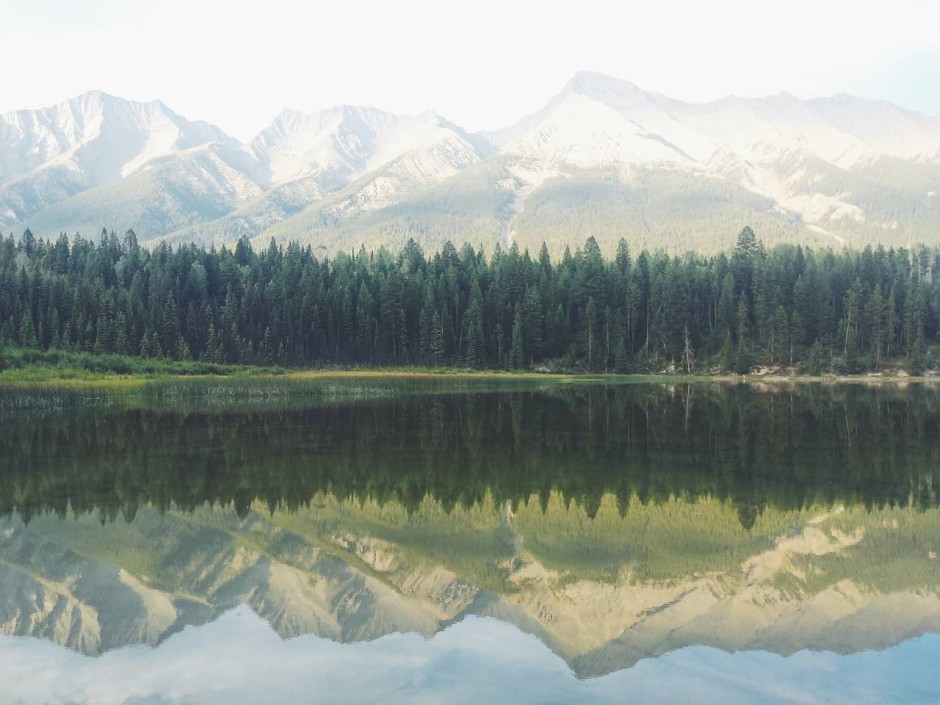 As a cycle tourist, detours are the most difficult decision. We poured over maps of dream-like trails to far off peaks that were 20km off our trail. But three weeks in, the decision to detour often fails in favour of taking the easiest or most direct route. Kootenay National Park is accessed by one main road, Hwy 93, that could rival any as one of the world's most magnificent drives. Massive copper colored canyon walls of Sinclair Canyon stand as the entrance to the park with grades up to 11% spread over 11km to follow for those wanting to get into the alpine wilderness.

Even with that grind and some of the worst shoulder conditions for cyclists with cracks and fault lines out numbering any smooth sections, it was worth every sweaty stride. We couldn't manage all the detours we wanted. But we did manage Dog Lake, an easy 2km hike that lays in Mt Harkins shadow. It was a small detour, the only our bodies could handle, but well worth the extra effort. 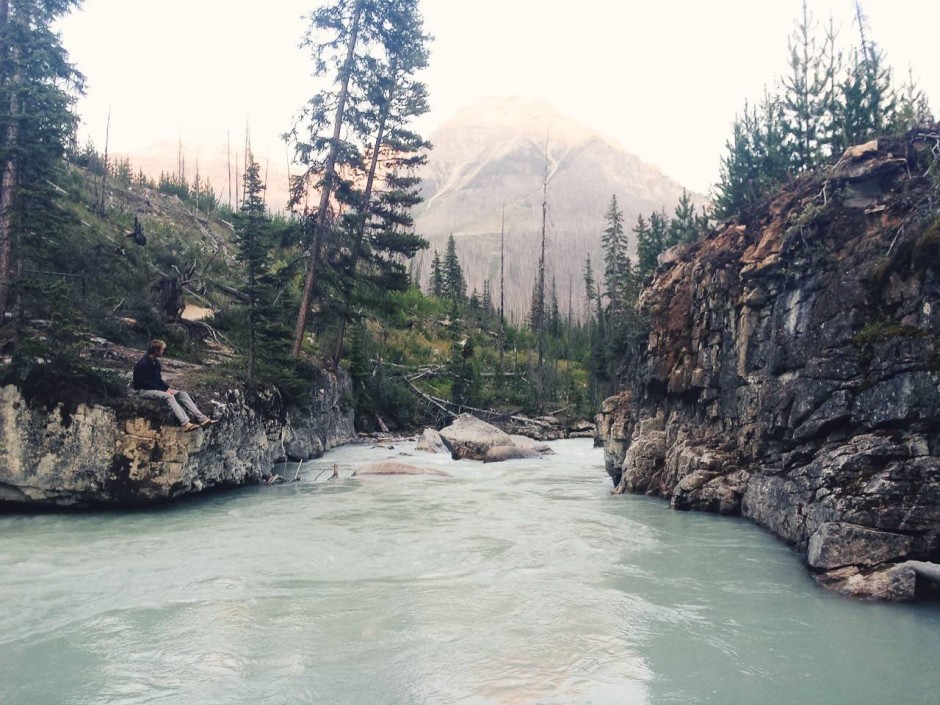 Our route was based on places we hadn't been. When your province is six times the size of Great Britain, finding new places to explore is easy. The Kootenay Rockies were one of those places. With Banff and Jasper as its neighbours, receiving more than seven million tourists combined, it is shocking how few people go to Kootenay National Park. Each destination was ours alone and the campgrounds were mostly empty.

Marble Canyon encompasses all the best of the park. Sandstone rock canyons carved by milky green rivers running alongside endless slopes of charcoal remains from one of BC's largest forest fires, with vibrant green new growth pine trees standing above a blanket of sweet smelling red fireweeds. And no one else in sight. 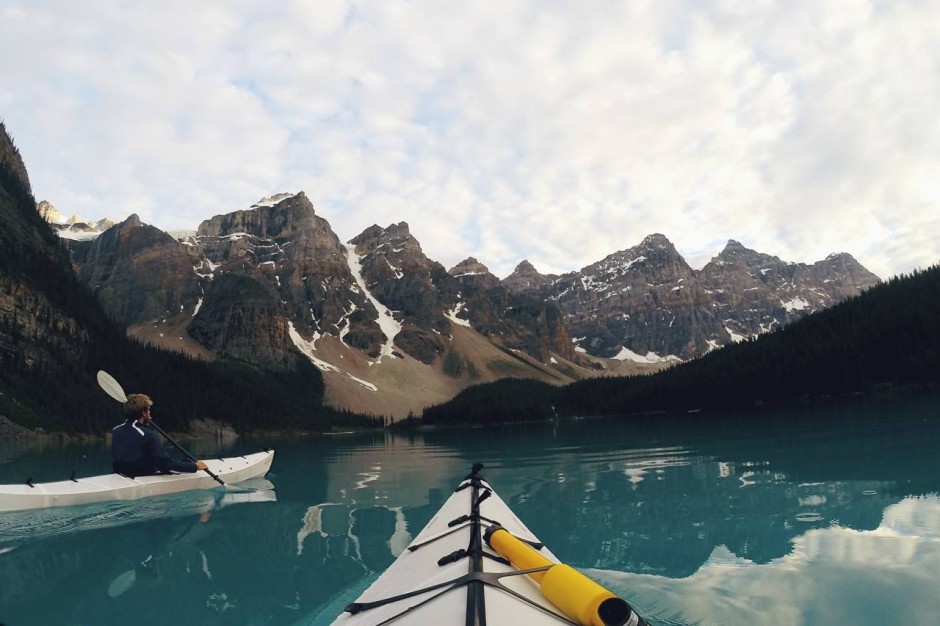 No stop in the Rockies is complete without stopping at Canada's most photographed lake. The topaz blue lake colour beneath the Valley of the Ten Peaks is so picturesque, it almost looks fake. We hardly ever made it to our final destination before sunset. In cases like Moraine Lake, this was to our advantage. The thousands of tourists and dozens of tour buses had been reduced to near nill, and the lake was buttery smooth as the evening turned cast pink shadows on the rocky peaks. 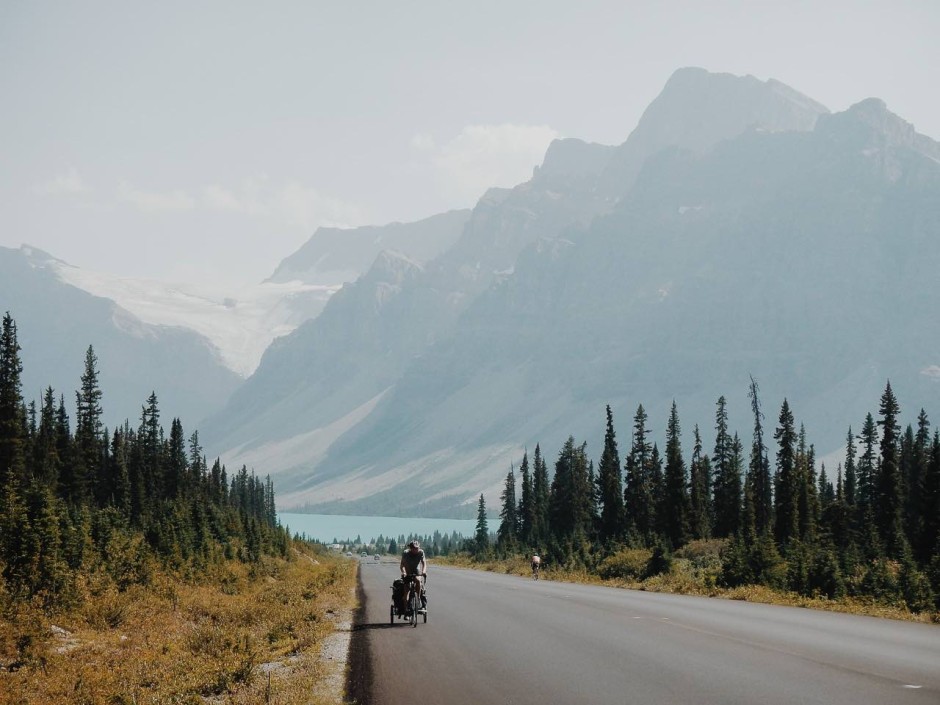 To tour through the Canadian Rockies by bike you have two choices: the 2800km Great Divide Trail that starts in Banff, Canada and cuts back and forth across the mountain range until it reaches New Mexico, or the Icefields Parkway. With road bikes, the latter is the only option. Stretching 230km from Lake Louise to Jasper, every moment is photo-worthy. Green and blue coloured lakes dot the sweeping valley surrounded by towering mountains with glacial capped peaks. Less than a dozen people were on the same cycle tour route as us. Not a single one of those people brought kayaks. 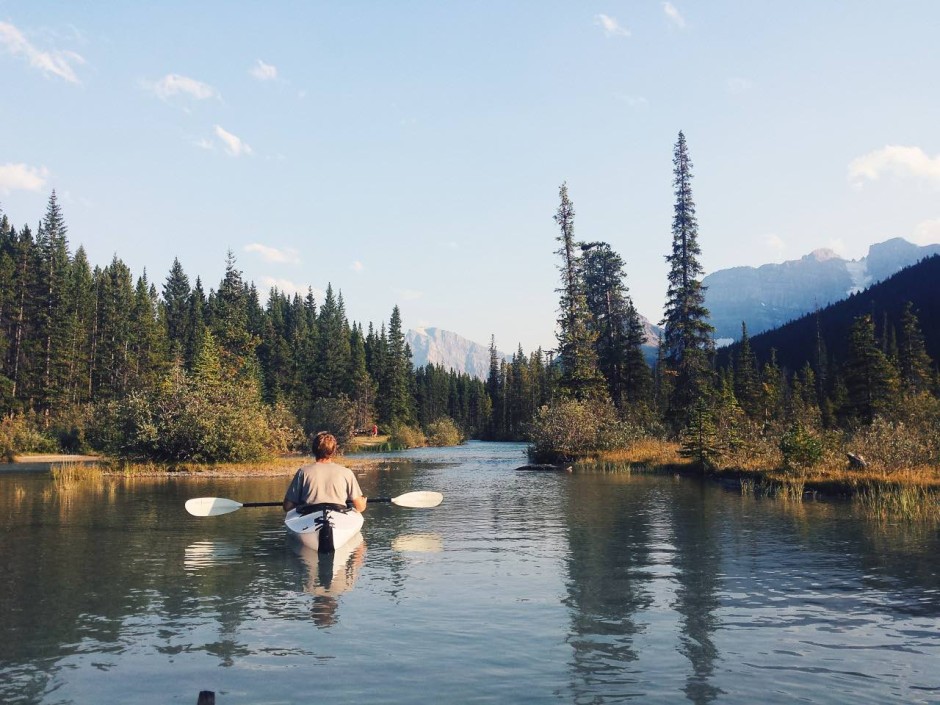 After a long few weeks of unseasonally warm temperatures hovering around 30 degrees and after climbing up to the 2088m Bow Summit, we couldn't get into Waterfowl Lake quick enough. Alpine lakes feel an ice bath, and cut your breath short by a sharp piercing feeling as soon as you enter. A swim is never long. But a kayak, at sunset, while catching the sun's last rays as it dips behind the peaks engulfing the valley, you want that feeling to last forever. 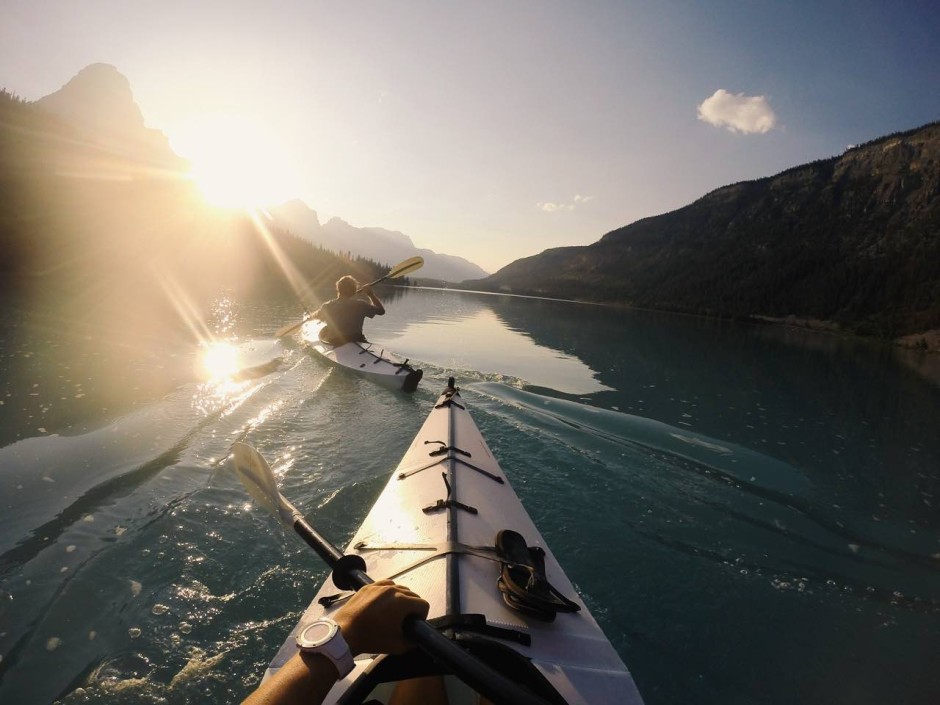 The first few weeks were rough. We had several close encounters with semi trucks and motor homes hugging too close to the shoulder. We didn't use the kayaks once in the first week. Our campsite was robbed on our third day. Our whole trip was in jeopardy after our first attempt at a mountain pass as we figured our load was too heavy to haul over the Coastal Mountains. We finally made it over the mountains and hit a heat wave. But we continued on, somehow. The negative parts of the trip seem so insignificant in a place like Waterfowl Lake. Any challenge you faced feels worth it. There's very few ways to travel that can be so challenging and so rewarding. 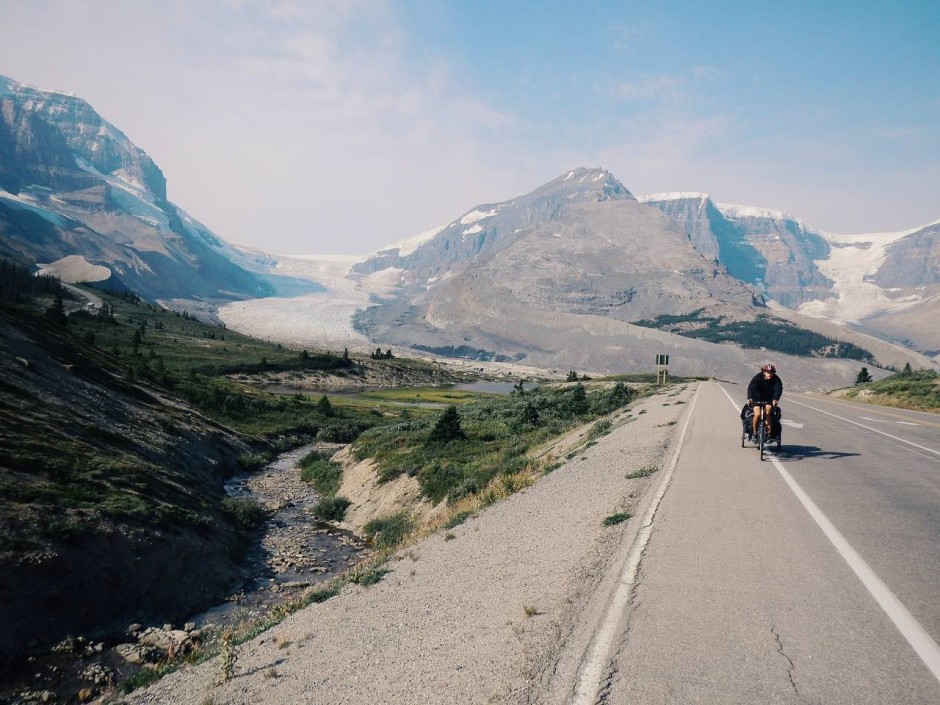 The ascent into Jasper National Park by way of the Sunwapta Pass is both gorgeous and brutal. Starting around 1400m, the roads twists and turns around relentless switchbacks for 20km to over 2000m. RVers stare with gaping mouths as the hill drags on and on for seemingly ever. But the reward is sweet: alpine meadows and glacial icefields so close you can nearly touch them from the highway. 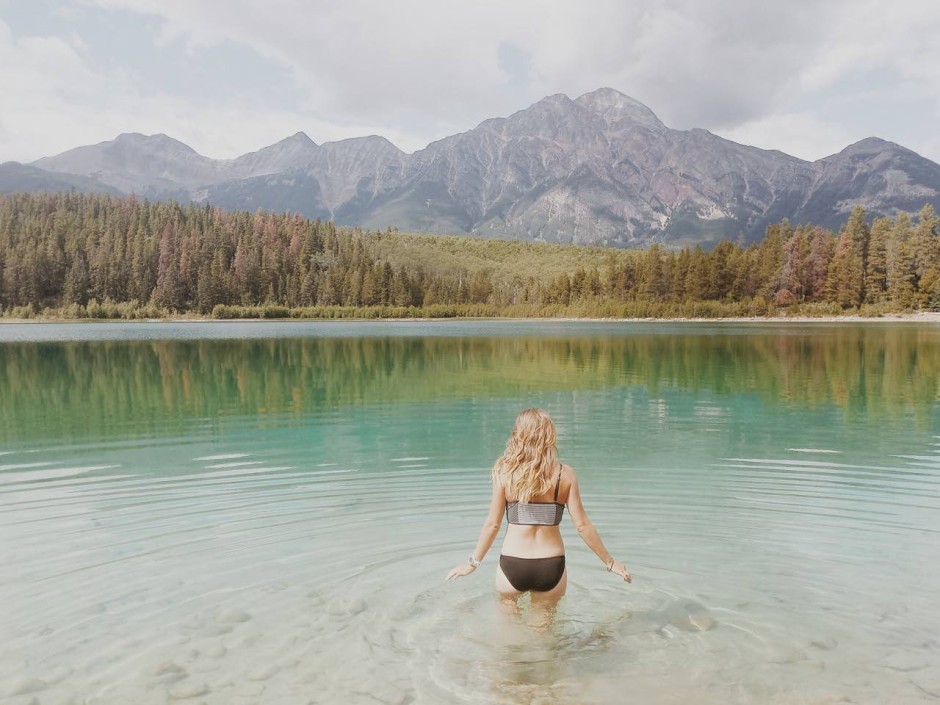 Neither of us thought we'd make it to Jasper. It was over 1500km from where we started and the longest ride I had done prior was a mere 20km along a sea wall. How your body feels after four weeks is, simply, exhausted. Your legs, shoulders, hands and neck ache to be rested. Your clothes you've been wearing for days on end have changed their colour. You start forgetting what sleeping in a bed and not cycling for five plus hours a day really feels like. And yet you find yourself, having a bath in a near ice cold glacially green lake with an aptly named Pyramid Mountain looming in your view. And once you've dried, you set off on another 800km leg of the journey. 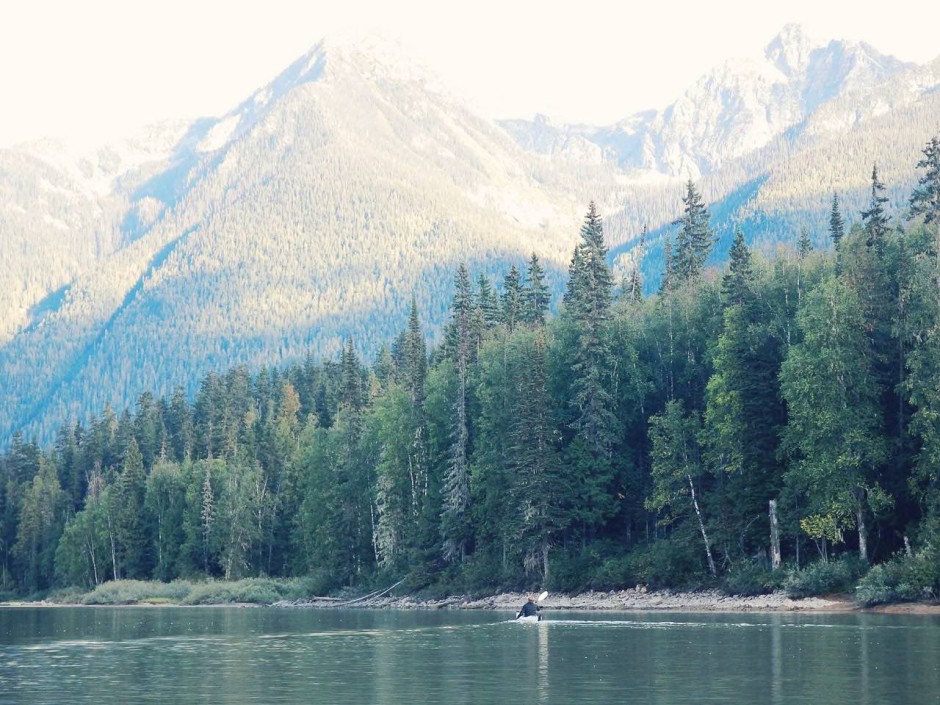 On more than one occasion we hit bad weather. One rain storm was so bad, our air mattresses seemed to be floating on the flash flood running through our tent. Our first night in Blue River, our first destination out of the Rockies, was greeted by 24 hours of heavy downpour. But after the first break in the rain we were off to the nearest lake we could find. Luckily for us, it just happened to be a beautiful lake as well.

Tagged
Cycling Paddling Student Work Canada
What did you think of this story?
Meh
Good
Awesome