I pick Mom up from the airport. Gray circles that look like tarnished silver dollars halo her eyes, and her skin clings to her bones with not a lick of muscle or fat in between. 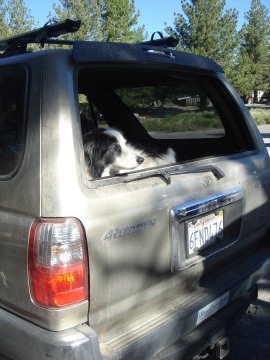 I’ve planned a road trip to distract her from death. We camp at Fairy Lake in Montana’s Bridger Mountains. An overnight cloudburst makes Junebug howl in the tent and Mom retreat to the car.

Over breakfast, Mom announces, “I love camping,” and laughs from her heart. Later, when wind gusts blow our food off our picnic table, and we bound like children to retrieve our bread and tomatoes. My mother moves like a human being for the first time in four months.

There is one very bad day. After a gentle walk near the Snake River in Grand Teton National Park, we park at an overlook as a thunderstorm hits. Hail drums on the car’s roof. Mom starts to cry and doesn’t stop for hours. I try everything, then nothing, to ease her tears.

I get out of the car because I’m about to vomit. I don’t, but it seems to make the rain slow. A rainbow arcs across the sky. Mom smiles.

My boyfriend waves his business bumper sticker in front of my nose and then lowers it to the kitchen table.

I’ve been resisting it for days, and he’s been teasing me about car vanity without knowing about my prior promises. I wait until he becomes distracted and wanders off.

This boyfriend is a keeper. He moved across the country to live with me in California, which tells me that. I carry the sticker outside. Goldie’s back bumper harbors the grime of a million adventures, including the camping trip we recently took to the Sierra Nevada.

I shine off a chunk of chrome. I practice until I’m ready to stick it on without creases. The ticklish feeling of commitment in my stomach makes me think that my dad would approve. 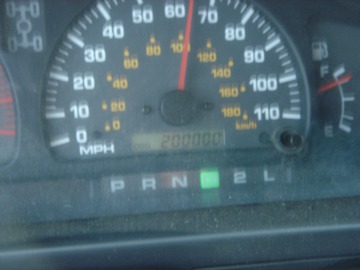 The car’s loaded with four people, one dog and winter gear. We’re headed for some backcountry skiing and snowshoeing in Utah’s Uinta Mountains.

Driving east, the sun sets through a cloud bank, throwing every pastel color into the sky behind us. My friends are screaming about it, and I swerve around the road trying to get a look.

I’m keeping tabs on Goldie’s odometer. It flips to its 200,000th mile while the sky is still on fire. I honk the horn like we’re in a parade.

A week after our backcountry adventure, a young woman plows into the back of Goldie during a snowstorm.

With $5,000 from the girl’s insurance company and two months of repair, Goldie lives, replete with a new bumper and another of my boyfriend’s bumper stickers.

Check out Borrowed Bikes, another Gear as Memoir essay on mSports.

Prev Page
Tagged
Narrative
What did you think of this story?
Meh
Good
Awesome

39 of the most breathtaking natural wonders in the world
Americans are rushing to buy a second passport, and here’s what it takes
Colorado’s new Palisade Plunge is the ultimate mountain bike mega-trail
For the perfect day of hiking and Colombian coffee, head to Jardín
This map of the US compares state populations to that of world countries