A family friend in Minnesota cuts me a break on a car, a 2002 Toyota 4Runner with gold paint and 56,000 miles. I live in Texas, but my folks love to drop in, periscope-like, on my life now and then, so they volunteer a road trip to deliver it.

We meet on a downtown Austin Street, where the slick high-rises have narrowed the sky into a blue stripe overhead. My hair is as long as it’s ever been, and it shocks my mom into grabbing a handful.

After a hug, she says, “Meet Goldie.” I understand that our family’s tradition of naming cars remains alive. 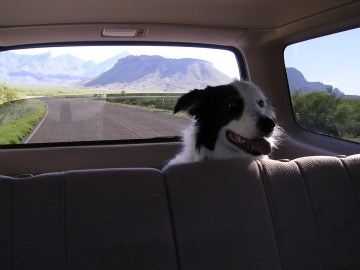 “No bumper stickers,” Dad winks. I made the same promise with my last car after he’d told me that “some conservative loon” might kill me if I drive around with my political leanings on display.

I respect the shit out of my dad and think he may be right, so I keep my opinions stuck to the refrigerator.

The hobby I share with Goldie is the desert. At night, we bloom plans with quadrangle maps. By day, we descend slot canyons, scour limestone cliffs for cave openings, and carry mountain bikes around mining village remnants. The way the car moves will allow us to access the desert’s deepest secrets.

Mom and Dad are visiting again, and we’re bouncing along in Goldie’s lowest gear. Junebug, my black and white Border Collie, whines with excitement. She knows that dirt roads like this yield adventure.

The desert is a museum without walls. We find 75 million year old petrified wood the color of rusted iron and crack jokes about dinosaurs. We gawk at an aluminum windmill, 100 years old and still spinning. “Aeromotor Co.” is written on its rudder, like many others in west Texas.

I sense sudden drag on the car. We pull over and find a tire hissing. I change the flat so fast that Dad is relegated to supervising. He’s sixty, so I prefer it this way.

My memory flashes to the day he taught me how to do this in the driveway of our house. The movements became rote memory. Mom is sipping a chilled Diet Coke when we climb back in a few minutes later. Dad says, “Your girl can change a tire.” 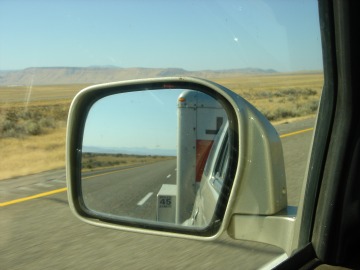 Goldie from Wyoming to California, September 2008.

The morning light makes my eyes blink and tear. I now live in Wyoming, although last night, I had slept in the back of Goldie on some public land outside of Missoula, Montana.

I had hit the road during the previous afternoon to put some Big Sky Country between me and my now-ex, who, earlier this spring, had told me he loved me and kissed another woman on the same day.

I told him enough was enough and headed to a weekend of trail running in the Bitterroot Mountains. I had shut off my cell phone in extra defiance and opened the car windows on the way, letting the wind tangle my hair.

Six voicemail messages beep from my mom when I turn my phone on this morning. I don’t listen to them but understand from the number of messages that our world has changed.

I’m sitting in the driver’s seat when she answers my call, screaming, “Dad’s dead! Dad’s dead!”